Travel gives joy, they bring new emotions, acquaintances and a great mood into our lives. One prerequisite for a successful trip and a wonderful holiday is a hotel where you will spend a little life called “vacation. There are many hotels: from cheap pensions to luxury hotels, where you have to pay 25,000 dollars a day. Today we are pleased to present you the most unusual hotels in the world . Staying in them will stay in your memory forever! 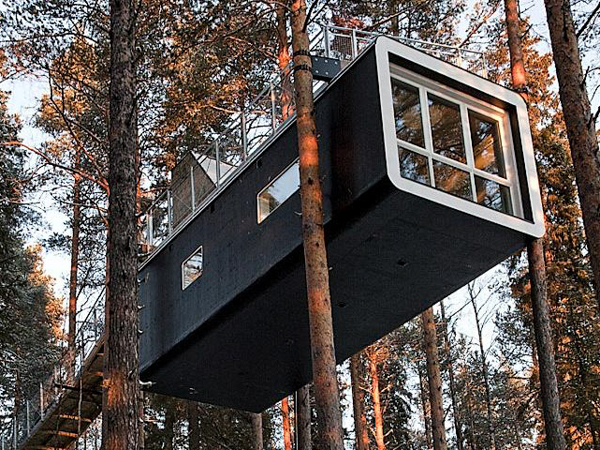 At the top of our list is Treehotel – a real architectural masterpiece, which was erected in the crown of the majestic conifers. The miracle hotel was opened in July 2010 near the town of Harads (Sweden). The aim of the creators was to erect an eco-friendly building (materials: glass and wood), blending into the natural landscape. Today Treehotel includes 6 tree-hung cabins, the exterior walls of which are faced with mirror plates. Each “cabin” is individual and has its own name: Blue Cone, Cabin, UFO, Mirror Cube, Room with a View, and Nest.

But don’t think that once you get into this hotel, you will live like birds in nests. For the comfort of guests, the caring staff has prepared cozy rooms with the necessary furniture, a restroom and Wi-Fi connection. Showers, sauna and hot tubs are also located in the trees. In addition, this unique hotel gives its visitors the opportunity to try delicious meals in the hotel restaurant, sit with a glass of wine in the lounge bar or have fun in the karaoke room. 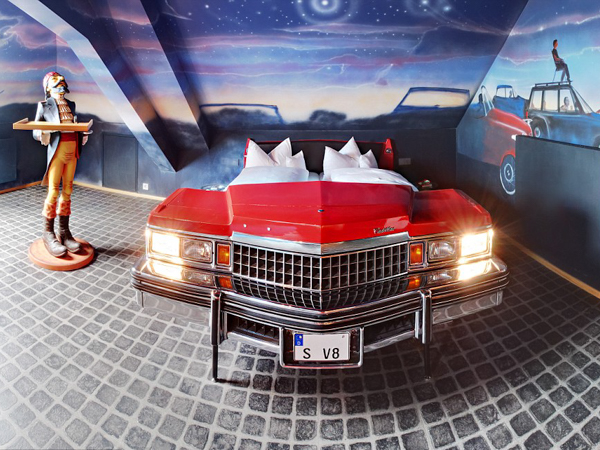 Can not imagine your life without a car? Then the V8 Hotel, opened in the automobile capital of Germany, Stuttgart, is just what you need for an unforgettable vacation. The hotel is situated in the building of the old airport, which is no longer in use. The design of this original hotel is completely devoted to the four-wheeled friends of man. Already in the foyer the guests can admire the exclusive cars. The 34 modern rooms are equipped with beds-cars and furniture in the form of spare parts and petrol stations. Fans of bikes were not forgotten by the designers. They will certainly be pleased with the interior of the room “Route 66”. Lovers of iron horses will find a large panorama on the walls and attributes associated with the life of heroes of the asphalt.

The V8 Hotel is located in the center of Stuttgart, close to stores, restaurants and many attractions of the old German city. The hotel has a restaurant, banquet hall, spa and game room for children. 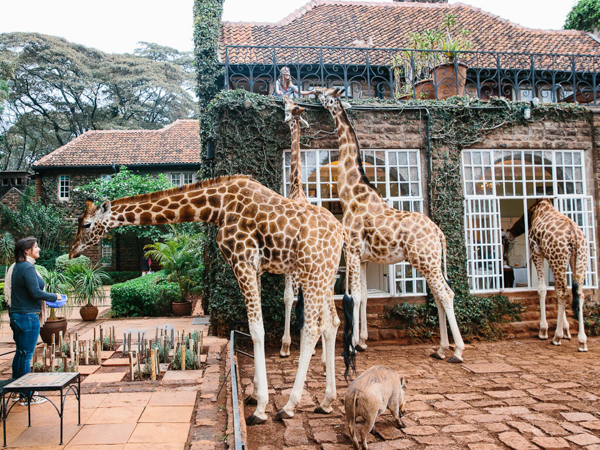 In Giraffe Manor not only the guests feel great, but also the giraffes living on its territory! The animals are not afraid of people at all, allowing themselves to be stroked and gladly accepting special treats from their hands, which the hotel owners leave in the rooms. The only hotel zoo in the world was opened in Nairobi (Kenya) on a private estate of 12 hectares. In 1974 this land was bought by the Leslie-Melville couple who created a project to save and conserve the rare giraffe population. In 1984, a hotel was opened here, which quickly became one of the favorite vacation spots for animal lovers. In addition to giraffes, about 190 species of birds, hyenas, warthogs and antelopes live here.

Giraffe Manor Hotel has ten cozy comfortable rooms with antique furniture and luxurious bathrooms. A fireplace lounge and verandas are open for guests’ convenience. The profits from the hotel business go to the fund of endangered animal species rescue.

Unusual Hotels of the World. The Manta Resort, Tanzania 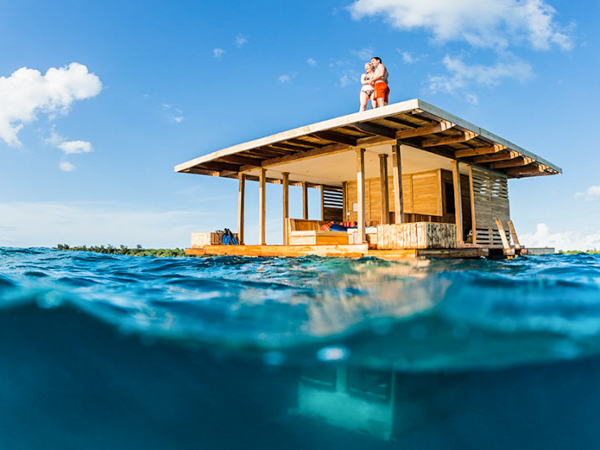 There is another amazing hotel in Africa, located on the island of Pemba – The Manta Resort, opened in 2013. The hotel has its own beach and offers visitors 18 rooms in various categories, a restaurant, a café, a spa area and a swimming pool.

It would be an ordinary five-star hotel, of which there are thousands, if it were not for one of its rooms, or rather, a one-of-a-kind floating villa, located in the Indian Ocean 250 meters from the shoreline. This hotel room for lovers of privacy and underwater life is a four-meter structure, consisting of three tiers. On the first “floor” guests can sunbathe in comfortable sunbeds; on the middle level is the lounge, dining area and bathroom. The lower underwater “floor” is a bedroom with panoramic windows through which visitors can admire the ocean life. At nightfall, spotlights are switched on above the windows to illuminate the marine kingdom. Despite the high cost (about $ 900 per person per night), the unusual hotel room is very popular.

READ
Unforgettable vacations in the Maldives 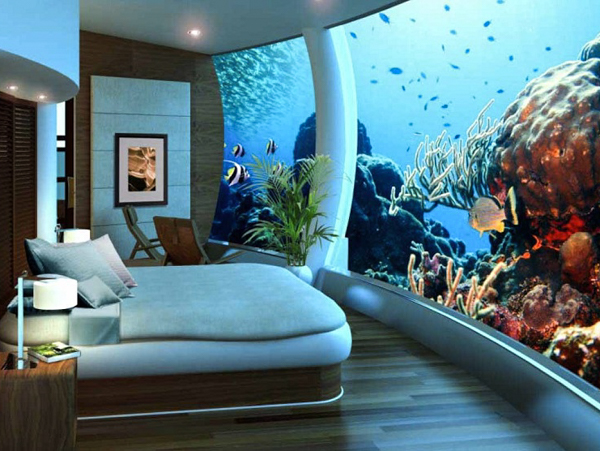 Another magnificent hotel located in the realm of Neptune. Its creators, unlike their African counterparts, went even further and placed 25 rooms underwater! This unusual resort is located on the island of Fiji. The idea of building the hotel belongs to L. Bruce Johnson, CEO and founder of the American corporation Triton, engaged in production of civilian submarines.

The Poseidon Undersea Resort includes 73 rooms. Of these, 48 deluxe bungalows are located on the hotel complex’s own beach, and 24 underwater capsule rooms of 51 m2 are in the Pacific Ocean, at a depth of 12 meters. The 300m2 Nautilus Royal Suite is a special pride of place. All rooms are equipped with modern designer furniture and decorated with marble and leather. The walls of underwater rooms are made of transparent durable acrylic 10 cm thick. In addition to the stunning room stock, the hotel is pleased to offer its guests several bars and restaurants, gym, spa, swimming pools, stores, library, conference room, and even a wedding chapel. 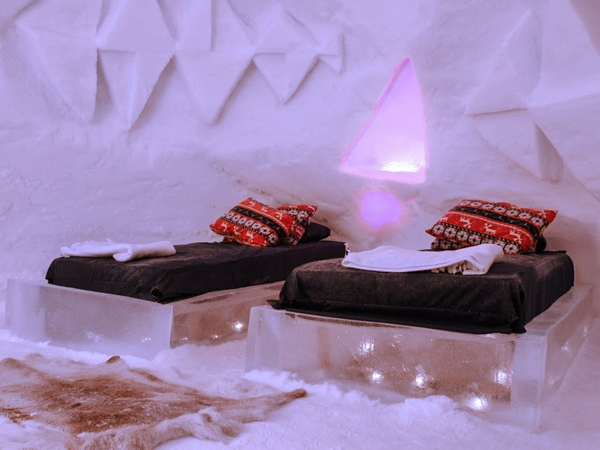 A hotel for those who like it colder. The unforgettable hotel, built in the style of the northern igloos, is located 20 km from the Norwegian city of Alta. This kingdom of snow and ice opens its doors in January and welcomes guests until spring. Why? Because under the warm rays of the sun icy hotel begins to melt, like the snow maiden. And in autumn it is rebuilt again.

Sorrisniva Igloo Hotel is a building with an area of 2 thousand m2. The hotel includes 30 rooms, each of which is maintained at a constant temperature of about -6 ° C. Do not forget to bring plenty of warm clothes if you choose this unique hotel as a vacation destination! For comfort and warmth, guests will find insulated sleeping bags as well as reindeer skin rugs and plaids in each ice room. There are on-site restaurants and a building where guests can comfortably shower, visit the sauna, or use the luggage storage facilities. In order not to bore the guests, the hotel administration has prepared such entertainment as unusual snow safaris on snowmobiles and skiing.

READ
Little-known places for tourists - what adventurers should visit 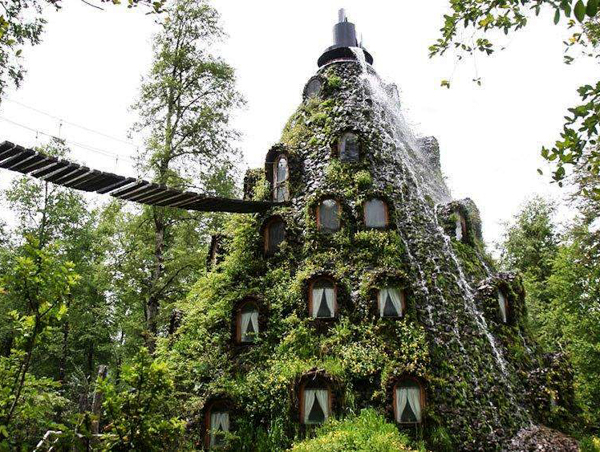 This eco-hotel, built in the mouth of the volcano, which died out hundreds of years ago, is often called a “hotel-waterfall”, because clear clear clear water flows down its walls like lava. The hotel was built in 2005 and since then it has been an integral part of the beautiful Chilean forest, the Huiolo-Huilo Nature Reserve. Materials for the construction of Magic Mountain Hotel were unique black stone and wood. The interiors of the rooms are done in an ethnic, somewhat old-fashioned style: furniture made of wood, stuffed animals and rough floor. On the door of the rooms you will not find the usual numbers – they were replaced by the names of birds that live in the forests of Chile.

And despite such a spartan environment, the cost of living is quite high and ranges from $250 to $450 per day. But believe me, the hotel is very popular. Guests admire, first of all, the beautiful landscapes of the nature reserve and the opportunity to take a tour of the picturesque forest trails, which is included in the price of the accommodation. In addition, visitors can take part in rafting, fishing, or swim in one-of-a-kind pools that are made from tree trunks. 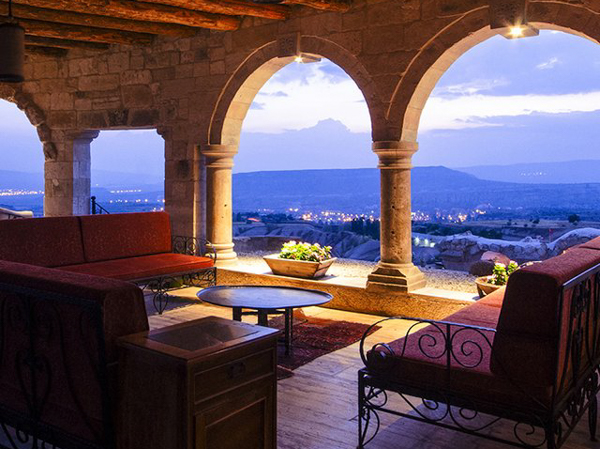 This five-star luxury Turkish hotel is fully up to its high category. It was opened in 2002 in Cappadocia, an area in central Anatolia visited by millions of tourists from all over the world. The reason for this is the unusual natural structures – futuristic figures of basalt and tuff, as well as the cave ancient cities, carved in the rocks. In the cave there is also Museum Hotel, in the decoration of which were used ancient priceless artifacts from the time of the Ottoman Empire. This hotel has several times the title of “The most exclusive hotel” and was included in the ratings of “The most unusual hotels in the world.

READ
What does a tourist need to know when traveling in Bosnia and Herzegovina?

To get to this gem of Cappadocia, guests have to go through an underground tunnel. The hotel offers them chic rooms, each with its own individual style. All rooms are equipped with jacuzzis, and some have taps that have Turkish wine pouring out of them instead of water. Add to that the delicious food from the hotel’s chef, the massage terrace with breathtaking views of Avanos, pools in the spa area and the opportunity for a hot air balloon flight, and you get a hotel in which the rest is worthy of the Turkish sultans. 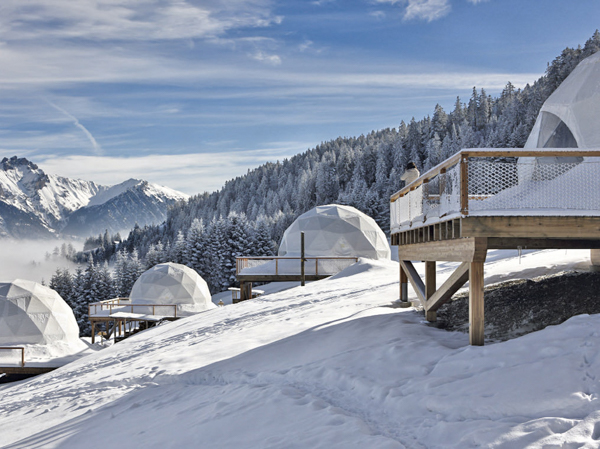 To get to this hotel, an eco-resort located in the Swiss Alps, is quite difficult, because it is located at an altitude of about 1,800 meters above sea level. The main building of the mountain hotel, where the reception is located, is remote from the residential chalets, and the guests have to get to the place of the night on skis or on foot. Each room is a separate house, mounted on a platform, which resembles an igloo. The chalets are equipped with a double bed, a sofa, a closet, a fireplace and a bathroom for guests’ convenience.

Whitepod is the place to come for people who are tired of the stress of big cities and want to spend their vacation enjoying the peace and beauty of nature. Guests can go snowshoeing, dog-sledding, paragliding, take a sauna or enjoy a massage at the spa. 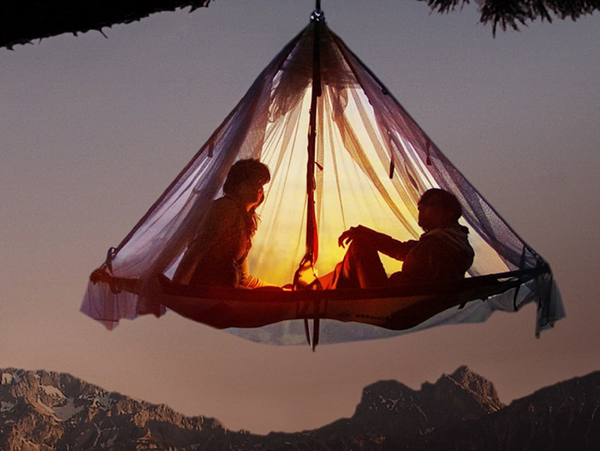 The last hero of the rating “Unusual hotels of the world” is a camping, which is located in German Bavaria. This extreme camping offers thrill-seekers to spend an unforgettable night in rugged tents suspended from trees at an altitude of 150 to 500 meters. The cost of this pleasure is 125 euros. Those who do not fear can spend the night on special two-seater platforms, which are fixed on the surface of the alpine rocks above the precipice, and pay 890 euros for it.

We hope that now, going on a trip, you will choose the most unusual hotels in the world, which we told you about today. And if you prefer a more conventional and economical vacation, then look closely at the hotels of the Black Sea coast. Believe me, they too have something to please and surprise their guests!

That’s all . We are glad that you visited our site and spent a little time to enrich with new knowledge.

Join our Vk group to stay up to date on new developments.

Did you enjoy this article? We would be glad if you share the link of this page with your friends