Medieval Tallinn is a city of living history.

There kind Middle Ages casts spells on people’s health- And the spirit doesn’t crave changes… (B.Chichibabin) Good time my dear forum users! Today my topic is not about dolls, I want to invite you to a little trip around medieval Tallinn-city with amazing thousand-year history and inimitable spirit of antiquity. I invite you to wander through the Old Town, its narrow cobblestone streets, past houses clustered tightly together and into its cozy courtyards. During many centuries of its existence the city changed hands many times, was ruled by Danes, Swedes, Poles, Germans… The names were changed: Lindanise, Kolyvan, Reval (or Revel) – all these names are multiple faces of Tallinn. The Estonians themselves during the Danish rule called it Taani-linn, that is “Danish town”, the two words merged and later became one – “Tallinn”.The exact date of foundation is not precisely known, the first written mention dates back to 1154, in the works of Arab geographer Al-Idrisi.He described it as “a small fortress-like town”. This is how Old Tallinn looks like from the “bird’s eye view”. The city was surrounded by a fortress wall and had six gates, only the Great Sea Gate and the Virus Gate have survived to this day. The entrance to the Old City began with the “Great Sea Gate”, built in the 14th century. They were once the main gate of Tallinn and were supposed to protect the city from attacks from the sea. Virus Gate is a symbol of Old Tallinn.

The towers-bastions of the Tallinn fortress. There were a lot of towers, but not all of them survived to this day. Photo journey starts with Viru Street, at the beginning of which are Flower rows, where a huge number of beautiful flowers and the smell of pleasant fragrances. The streets of the Lower Town at first sight seem to be an intricate maze, but in fact they are very logically laid out because they connect the most important parts of the town: the port, the town center, the market square, the watchtowers, the residential areas. Street Viru lead to the center of Tallinn-Ratushnaya Square.It was a lively place of trade, here were held fairs and entertainment.The tradition has not been lost to this day.I suggest you watch a little video, which I shot at Town Hall Square during the Old Town Days.Pay attention to the clothes of the dancers.It has a different style, ie, the dancers are dressed in different estates, from simple craftsmen, to the nobility.

In the days of Old Town, before Christmas, on the days of the city holidays, on the square arises a whole town of rows of shops, where you can buy handicrafts, sweets and souvenirs. The main building is Tallinn Town Hall, which gave its name to the entire square, and the spire crowning it, Old Thomas, which has always been called the guardian of the city, a true symbol of Tallinn. And on this train you can take a ride through the streets of Old Town.

Tallinn City Hall is the only surviving Gothic-style city hall in Northern Europe. It is over 600 years old.

Directly opposite the Town Hall is no less interesting historical object – Town Hall Pharmacy. Historians say it is the oldest of all operating today’s pharmacies in the world. It is hard to believe, but this pharmacy first began selling medicines back in 1422. Cobblestone streets “flow” in different directions from the center of the capital. Street Pikk yalg (long leg), leads up to the Castle Toompea, it is located on the hill of the same name.

At the end of the XIV century was built 48-meter observation tower “Long Hermann”. It owes its name to the hero of medieval legends Lange Hermann, which in German means “Long Warrior” or “Leader”. Toompea Castle and Long Hermann. Just opposite the Castle is Alexander Nevsky Cathedral. At Vyshgorod (Upper Town) there are several viewing platforms where you can see the city from different sides. Next we have to go down Luhike Jalg street (Short Leg). This steep footpath in Toompea was built so that in case of military danger you can hide behind the strong walls of the castle. The citizens joke that Tallinn will always limp because it has legs of different length) One of the watchtowers is called “Kik in de Kek” or “Look in the Kitchen” From the upper floors of this tower guards could watch not only enemies but also peek into the kitchens of housewives to see what they were cooking.Now there is a museum there. In the Lower Town there is the church of Niguliste, where concerts are now held in the church hall, which is famous for its excellent acoustics. Oleviste Church. The church is named after the Norwegian king Olaf Haraldsson (995-1030), later declared a saint. The first information about the church Oleviste refers to 1267. 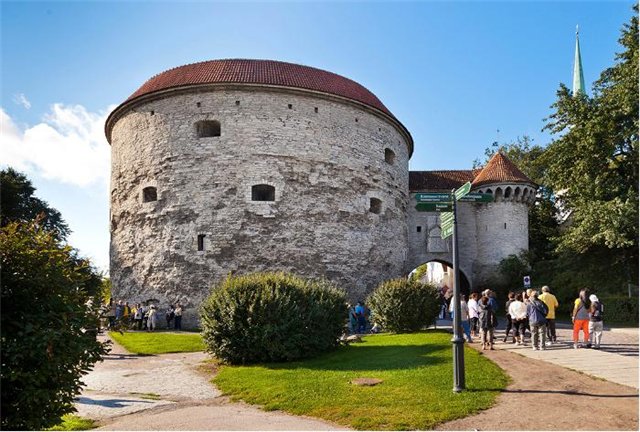 Let’s continue to the Great Sea Gate and look at the “Fat Margaret”. The tower was given its name in 1842 because of its impressive size: diameter of the tower is 25 m, and its height is 20 m. Nowadays the Maritime Museum is situated there, and it was built to protect the city from the sea. Passenger port is very nearby.Huge liners go every day to different directions: 400 km to Stockholm, 70 km to Helsinki, and you can get there by high-speed ferry ships, travel time 90 minutes.Guests of the city from St. Petersburg delivers “Princess Anastasia”.

Thank you for stopping by to get acquainted with Old Tallinn.Continue in comments. Note: historical descriptions and some photos are taken from the internet.

Tallinn is a city with thousands of years of history, shrouded in many mystical stories and legends. Wait until darkness falls and go for a walk through the streets of medieval Tallinn. I will tell you about the most mysterious places in the Old Town and the tragic love story of Barbara von Tiesenhausen, whose image still appears in their ancestral mansion in Vyshgorod.

The mysterious places of Old Tallinn

Arriving in Tallinn for the first time, many notice that the time behind the walls of the medieval city seemed to have stopped, and even the air permeated with history. The viewpoints offer magnificent views of the spires of cathedrals and Town Hall, of tiled roofs of houses with stove chimneys.

The 124-meter spire of the tower of St. Olaf (Oleviste) Church pierces the low, leaden sky above the city. There is a famous legend connected with the construction of this cathedral, which explains why the cross on the spire of Oleviste Church was placed crooked.

The towers of the fortress wall also have a story to tell. The Maiden’s Tower is said to be so haunted that its inmates (girls of easy virtue) once begged to be moved elsewhere. Take a closer look at the Old Toomas weathercock, the symbol and faithful guardian of the city also keeps its history.

READ
Gardens and Parks in England: Dartmoor and Brixham

Go down and walk to Rataskaevu street. On it there is a beautiful well, depicted in many movies. The “cat’s well” is closed and has not been used since the 19th century. According to the legend, a mermaid used to live there and spoil the water. To placate her, the townspeople sacrificed cats. As you can guess, the water in the well did not get any better, and the energy of the place has not improved either.

On the outskirts of the Lower Town you can see the house where in the Middle Ages lived the city executioner, who has an unusual romantic privilege. In the Upper Town the ghosts also have something to tell about themselves. One of the mansions has gained notoriety, where the image of a young woman who scares men half to death appears. Ask a guide and he’ll tell you about the chilling story of Pontus de la Gardie, a leather merchant.

Although there is truth in the stories, which have been told by word of mouth for centuries, they never fail to pique your interest and help you imagine times and manners.

The legend of Barbara von Tiesenhausen

I will tell you the not so well known, but based on real facts, story of the noblewoman Barbara von Tiesenhausen. The events took place outside of Tallinn, in Porkuni Castle, a mansion that belonged to the Tiesenhausen family.

It happened in the 16th century, the legend shows how great were the barriers between the estates in ancient times. Barbara was the youngest sister in the rich, large Tiesenhausen family. The girl grew up modest and beautiful, taught poor children to read and write, and was very different from her brothers Jurgen, Reinhold and Bartolomeus, who boasted their dignity and lineage.

One day a new guest – the writer Franz Bonnius – appeared at the house of the Barons of Tiesenhausen. The young man caught Barbara’s attention with his kindness, generosity and spontaneity. Barbara and Franz began to spend a lot of time together and soon realized that they were in love with each other. They did not manage to hide their feelings for long.

When the brothers learned that Barbara and the homeless Franz were in love, they were enraged, for such an alliance was considered a mesalliance. The laws of the day stipulated that if a girl of high birth married a man of inferior status, she and her family would be condemned and lose their status and wealth.

Barbara and Franz decide to flee, but they do not manage to get far from their brothers who rush after them. At the moment Franz went to change horses, the pursuers caught up with Barbara. The girl decided to save her beloved, and told him that her fiancé had abandoned her and run away. Barbara was brought home.

Since she did not renounce her love for Franz, the brothers decided to punish their sister severely. On the verdict of the family court, 20-year-old Barbara was drowned in the icy water of Lake Porcuni. Since then, the spirit of the poor girl has been appearing in the mansion belonging to the Tiesenhausen family on Vyshgorod and searching for her lover.

In 1969, this legend inspired Estonian composer Eduard Tubin and writer Jaan Cross to create an opera of the same name, Barbara von Tiesenhausen.

I invite you to take a tour of the Legends of Tallinn. As you wander through the streets of the Old Town, you will learn its history and secrets and decide for yourself what is true and what is fiction.