The Republic of Maldives is located in the equatorial waters of the Indian Ocean about 700 km southwest of Sri Lanka. A chain of 20 atolls consisting of 1,192 coral islets. Population is about 395 thousand people. The islets are slightly above sea level: the highest point of the archipelago – the southern atoll Addu (Siena) – 2.4 m. The total area – 90 thousand square kilometers, the land area – 298 square kilometers. The capital Male – the only city and port of the archipelago – is located on the atoll of the same name.

Subequatorial monsoonal climate. Driven by the northeastern monsoon, dry from November to March, and rainy from June to August, driven by the southwestern monsoon. Hot weather all year round, with temperatures ranging from 24 to 30°. Temperatures never drop below +17°C in January-February and never rise above +32°C in April-May.

There is a freshwater reservoir.

The archipelago was inhabited more than two thousand years ago by the Dravidians, natives of territories corresponding to present-day Sri Lanka and southern India. Studies of Maldivian oral and other cultural traditions indicate Dravidian participation in the formation of the modern Maldivian nation [3] . In the V-VII centuries, Arabs and Persians appeared on the islands.

The Maldivians practiced Buddhism until the twelfth century, but in 1153 an Arabian preacher of Islam landed in the Maldives from Tabriz [4]. He was very active, and soon the entire population converted to Islam. The preacher himself proclaimed himself a sultan named Muhammad ul-Abdala and became the founder of a dynasty that ruled the Maldives for a long time.

In 1558 Male was captured by the Portuguese and built a fort there. However, already in 1573, the Maldivians destroyed the fort and expelled the Portuguese. Then the Dutch tried to gain a foothold in the archipelago, also without success.

In 1887, Britain established its protectorate over the Maldives.

In 1959 the atolls of the archipelago Suwadive formed a secessionist state – the United Republic of Suwadive, which lasted until 1963.

In April 1964, the Maldivians rebelled against British rule. Rebels destroyed the airport and besieged the residence of the British administrator.

November 11, 1968 on the results of the referendum the Maldives was proclaimed a republic. Since 1978, Maldives has been ruled by President Momoon Abdul Gayoom (6 consecutive five-year terms).

After the riots in the capital of Maldives in August 2004, Gayoom promised democratic reforms and expanded political freedoms. Political parties were allowed in 2005. The first multi-candidate presidential election in 2008 was also promised.

In October 2008, Mohamed Nasheed became the first president of the Republic of Maldives elected by popular vote.

On February 7, 2012, protests led to the resignation of President Mohammed Nasheed.

Republic. The head of state and the executive is the president, who heads the Cabinet of Ministers and appoints its members. The president is elected by parliament, but the candidate must be approved in a national referendum and receive at least 51% of the vote. The total term of presidential office is unlimited.

The new Constitution of Maldives, adopted in August 2008, focuses on human rights protection, local governance, and power-sharing between the branches of government, with the powers of the president being curtailed drastically. A multi-party political system is consolidated and independent Civil Service Commission and Human Rights Commission, the Supreme Court and the Electoral Commission are introduced.

The highest legislative body is unicameral parliament – Mejlis that is elected for five-year term by direct vote. It consists of 50 deputies (42 elected and 8 appointed by the president). The last parliamentary elections were held on January 22, 2005, with Ahmed Zahir becoming the speaker. Bills passed by parliament are subject to approval by the president, who has the right to return the document for reconsideration. If a bill returned for reconsideration is approved by a two-thirds vote, the president is required to make it law. By tradition, parliament convenes two to three times a year.

All citizens 21 years of age or older have the right to vote.

The president is head of state and heads the cabinet (the post of prime minister was abolished in 1975), whose members are appointed by him from among members of parliament or from the corps of civil servants. The president appoints and dismisses ministers at his discretion from among the members of parliament or civil servants. He is not directly accountable to the majlis for his actions. In 2008, in accordance with the new constitution, the first multiparty presidential elections in the country’s history were held, ending the 30-year era of the presidency of Momun Abdul Gayoom. Mohamed Nasheed became the new president. The newly created post of vice president was taken over by M. W. H. Maniku.

The highest executive body was the cabinet. In November 2008 the new government of 14 ministers was sworn in.

The judiciary comprises the Supreme Court, eight lower courts and 19 local courts on the atolls. Significant judicial power is vested in the local leaders – the heads of atoll administrations (verina) – who are appointed by the President and answerable only to him and formally to the Government. They oversee the activities of island heads (katibas). While secular laws are in place, Shariah law continues to play a significant role, largely determining the life of Maldivian society. For example, freedom of expression and assembly, establishment of associations and societies, as long as it is “not against the Shari’ah and the law” are guaranteed.

According to the May 2009 elections:

The Maldives is a unitary state. Administratively, the country is divided into 19 island groups.

The main sectors of the economy are tourism (28% of GDP) and fishing.

Underdeveloped. Most food is imported. Coconut is the main local crop, but also bananas, vegetables, fruit, sweet potatoes, and breadfruit are grown. Cattle are practically not bred.

The main means of transport are sailing and motor boats. Most transport is by seaplane, helicopter, and motorboat. Public transport as such does not exist. Any Maldivian island can be crossed in 1.5 to 2 hours. The main mode of local transport is the doni (dhoni), a traditional multi-purpose vessel, now improved with diesel engines. Large “vedis” boats are used for long voyages to remote atolls. Car cabs (and roads) exist only in the capital Male and on the island of Gan. Maldivian Air Taxi flies De Havilland Canada DHC-6 Twin Otter aircraft between islands. 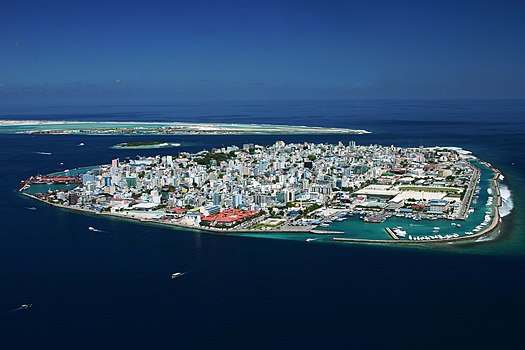 The population is 395,000 (July 2011 estimate) [1]. The largest concentration is in Male. Many of the Maldives islands are uninhabited.

The vast majority of the population is descended from South Asia and the Middle East. In the capital some Indians, Pakistanis, Arabs and Sinhalese live.

READ
Tours in Morocco. Get a taste of the East

The official language is Dhivehi, an Indo-Aryan language close to Sinhalese, with loanwords from Arabic and English. The writing system is based on the Arab-Persian script, from the 17th century. The educated part of the population speaks Arabic and English.

Religiously, the Maldivians belong to the Sunnis, the largest and most traditional Islamic denomination. Prayers are held five times a day in all the mosques that are a must in every inhabited island.

According to a 2012 study by Open Doors, an international Christian charity, the Maldives is the 6th most harassed country in the world [5].

The cuisine of the Maldives is based on Arabic and Indian. The most common are a variety of fish products, rice, spices, sauces. A favorite Maldivian dish is tuna and rice. Desserts – coconut in any form, areca nut, lots of fruits, fruit salads, pastries. Popular drinks are tea with milk and Arabic coffee.