We had a great time visiting these places to learn more about history.

A small town Gammelstad is the closest suburb of Luleå, in northern Sweden. A good part of it is a museum historical complex – the ethnic village, the church town of Gammelstad. It will be discussed in my review. 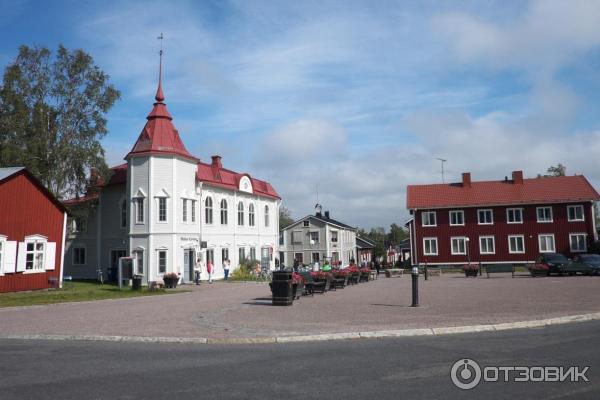 This is Lapland. A huge area. There are many forests, mountains, lakes and rivers, and not many cities. For me – these conditions for life is almost ideal (if it were not for the climate). It was the great dispersion and distance that led in the Middle Ages to the appearance of such church towns, where people did not live, but only slept overnight during their short visits to “civilization” to attend church services, town events, and fairs. You can understand the quietness of medieval “transport. Nowadays, you could get in a car or bus and be there in a couple of hours. But back then, you couldn’t get enough of it. So they drove (more often, perhaps, on foot) to the nearest parish “with overnight stay”.

There were many such villages throughout Scandinavia. No more than half a dozen have survived, they say.

The Lutheran church in Gammelstad was built in the XV century and is called Nederluleo. The massive walls, the squat arches of the entrance – all this speaks for the fact that it has survived almost in its original form to this day (only the bell tower was rebuilt in the XIX century) and thus is quite an interesting object to visit on its own. Of course we went in! 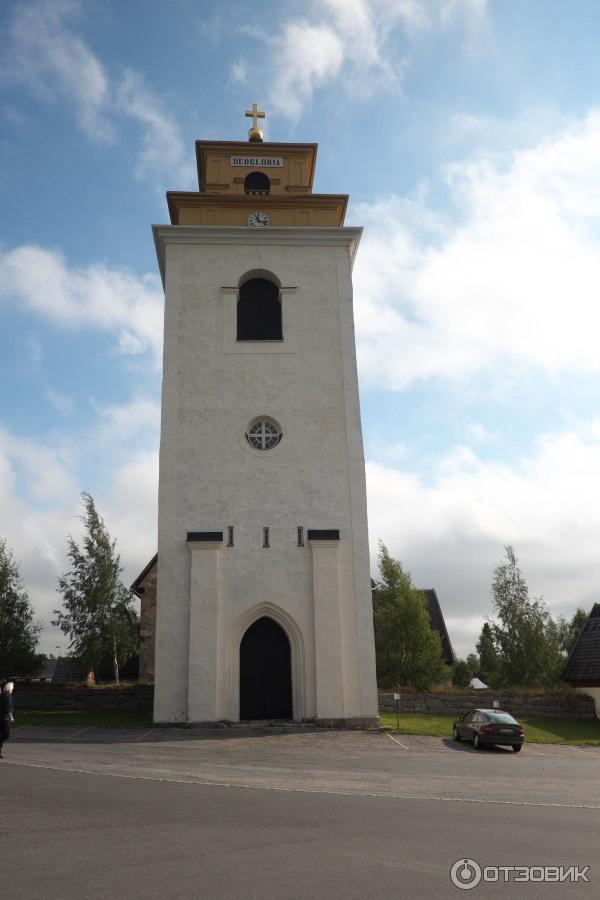 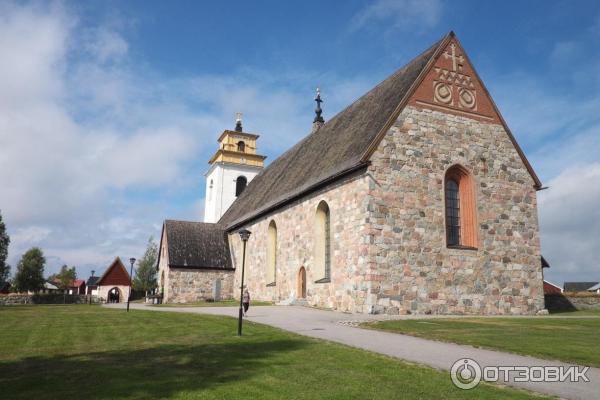 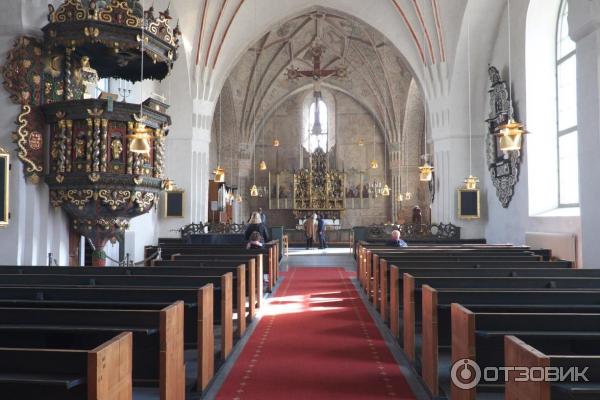 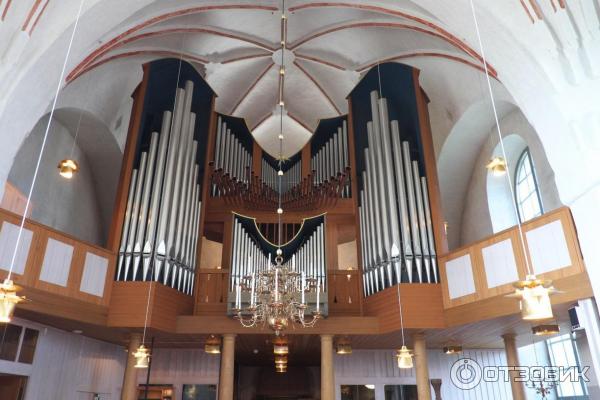 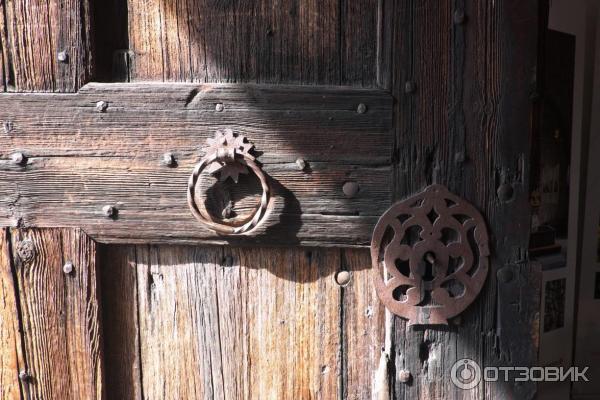 This was my first time in a Lutheran church. Everything is just like in the movies! Rows of benches to accommodate the congregation, the iconostasis, and most importantly, the organ. We went in when there was no service, but it was still interesting.

Then we went to see the houses where the parishioners stayed during their visits to Gammelstad. Of course, everything looks clean and tidy in a European way. Houses (I think there are more than 400 of them) are made in the Scandinavian style – a combination of dark red and white. The bulk of buildings have survived since the XVIII century. 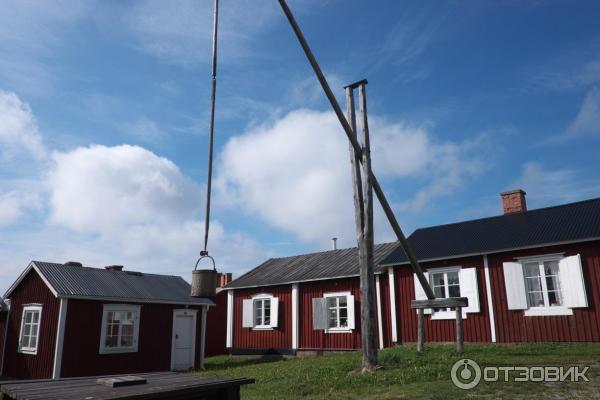 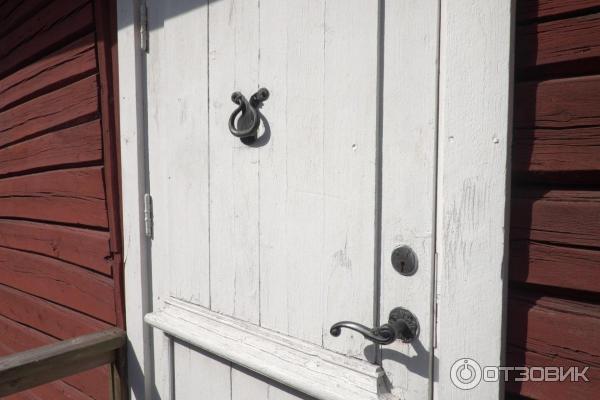 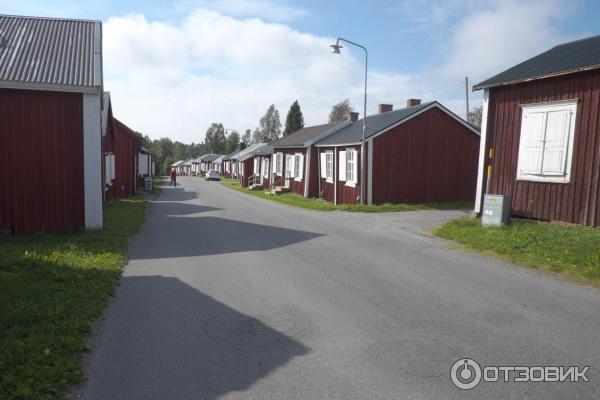 Now, of course, these houses are not used for their intended purpose. But, the Swedes, as best they can, maintain the “residential” look of the buildings – the shutters are open, pots of flowers (plastic) on the windowsills. It looks nice.

One of the houses has an interior museum. We stopped by. You can see how the parishioners lived. The bathroom, of course, is not provided in the house. There is a sink, a small corner for cooking and eating, a bedroom with bunk bunks, and a fireplace was used for heating. 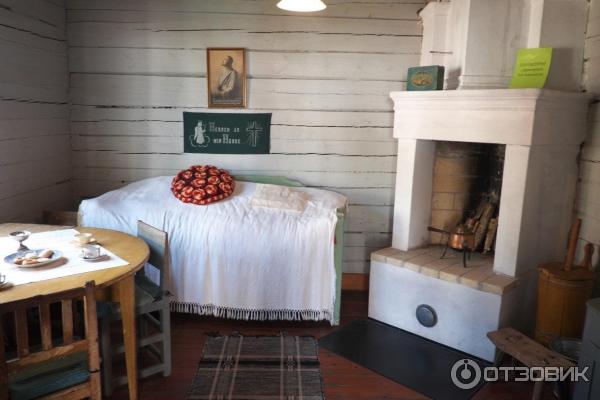 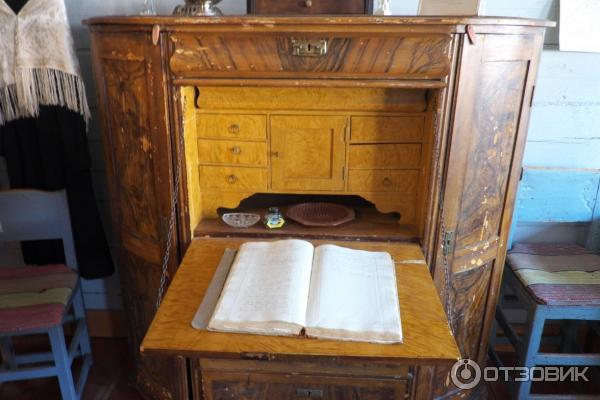 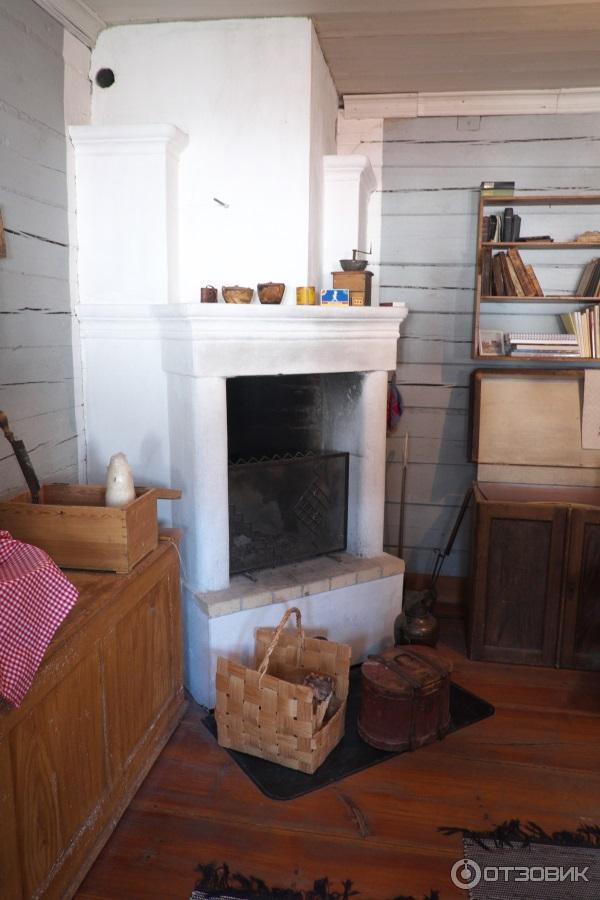 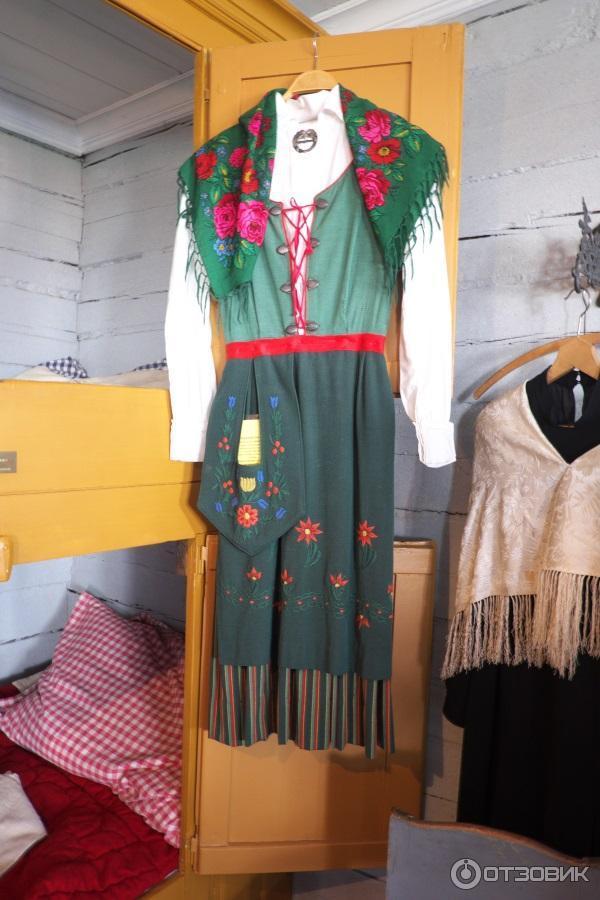 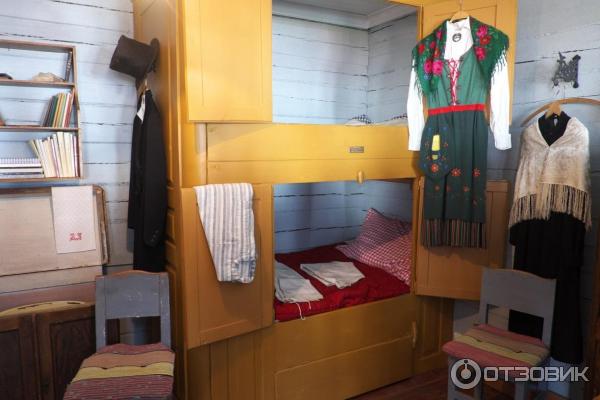 In our presence the caretaker (or tour guide) was telling a small group of foreigners about the living conditions of the parishioners. Why I thought it was a foreign group of tourists was because the story was in English, not Swedish, so we were able to understand some of it. In particular, he said that the huts were usually very densely populated, with four people sleeping on each of these “shelves.

A visit to the house-museum diversified our visit to Gammelstad. I liked that the interior and things seem to be antique, not newfangled. Also, of course, it’s nice that everything is free. Tourists stop by Gammelstad, but not many. We were in August, in the midst of the European vacation season, and we had two tourist buses on the territory, from which small groups of tourists scattered over the extensive territory.

I photographed a plan-map of the church town of Gammelstad. There are also brochures on the stand with information in English and Swedish. Was not in Russian.

READ
The most beautiful bridge in the world: extreme tour 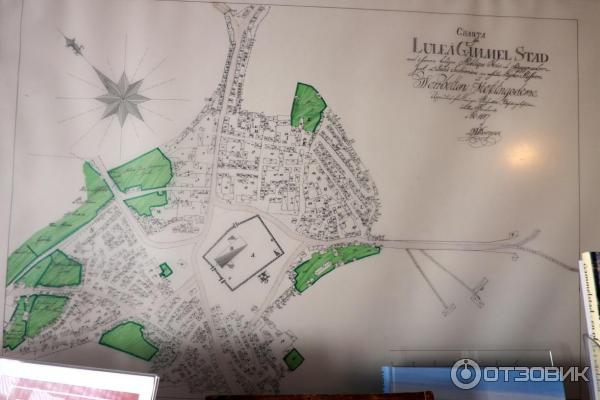 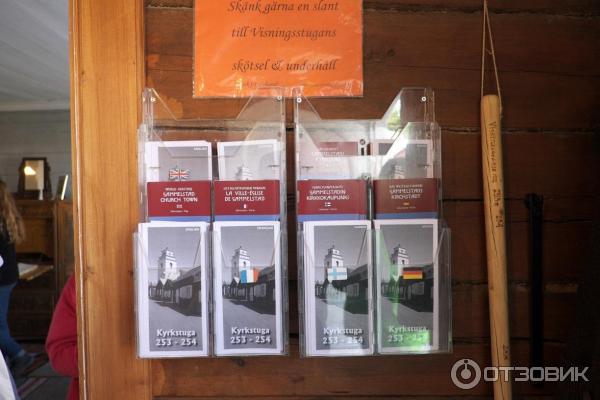 To visit, of course, I can recommend. If you go on a trip to Lapland, northern Sweden, you must also drop by Gammelstad. It is easy to get to it – 10 km from the center of Luleå to the northwest, there are signs on the road.

There are videos! I attached the video to my review of Storforsen Cascade, as it’s not just about Gammelstad. Unfortunately, Otzovik not only ignores the timecode in the video link, but also forbids attaching the same video to different reviews. So if anyone wants to watch exclusively about Gammelstad, go to my review of Storforsen Cascade, and rewind the video at about 12:17. I apologize for the inconvenience!

“Church Village” Gammelstad near the town of Luleå

Hammelstad, in the far north of Sweden, is a prime example of the church settlements that were once so characteristic of all of Scandinavia, consisting of several hundred wooden huts built around a 15th century Lutheran church and designated as temporary homes for the many parishioners from surrounding lands who stayed in town for Sunday and holiday services.

The small town of Gammelstad, nestled on the coast of the Gulf of Bothnia near Luleå, is known to the world as an exceptional example of North-Scandinavian church settlements, where the typical urban architecture is perfectly adapted for the harsh natural realities of northern latitudes. The main feature of this kind of towns is that they are fully intended only for temporary residence during the Sunday and holiday religious services, thus clearly reflecting the specific lifestyle of the local population.

The Luleå River, in whose valley today’s Gammelstad is located, has long been used by people to travel between the Gulf of Bothnia and the Lapland Mountains, and has also taken travelers far beyond Norway’s borders. The first villages of farmers appeared here in the XIII century, when the local fertile land became a colony of the united Swedish-Finnish kingdom. And judging by the scale and rich decoration of the Gammelstad stone church built in subsequent times, the region subsequently only benefited from this as it embarked on its path of economic prosperity.

Almost at the same time, the region was also favored by local farmers, joined by Sami people and merchants of all kinds who came here from the coast of the Gulf of Bothnia. A frugal but very elaborate infrastructure around the church began to form from the middle of the 16th century under the influence of the inhabitants of nearby settlements and owners of remote farms who, because of great distances and the influence of weather conditions, had no opportunity to return home immediately after the divine service. That is why wooden residential buildings and stables were built near the church and market square, so that visitors could have somewhere to stay overnight on weekends and public holidays. This is how Gammelstad came into being.

Later, many inhabitants of the region began to move closer to the sea, which led to the formation of the city of Luleå, often referred to as the New Town. And the old church settlement was called Gammelstad, or Old Town. The city continued to be a religious center, but as the population grew, the number of parishes began to increase and the need to travel long distances to attend a service in Hammelstad began to disappear. In addition, many farmers could not attend the service as a family because someone had to look after the household. All this gave rise to the wonderful tradition of organizing a church weekend for the whole family several times a year, where the Old Town, with its many empty houses, came in handy.

By now Gammelstad, which was bypassed by the industrialization of the XIX century, has reached our days in its original form, having lost only some of its details. For example, with the advent of automobiles, the town has almost completely lost its stables. The layout of the church town has remained unchanged due to the fact that most residents of the region moved to Luleå and all the subsequent houses, built in the twentieth century, belong to the residential areas of the New Town.

READ
Cities of France: Sights and Interesting Things to See

In Gammelstad towers 424 wooden buildings, which have a total of 555 living rooms. Local buildings are characterized by red walls of wooden houses and the use of white paint for windows and doors. The entrance doors and window shutters, richly decorated with all kinds of patterns, deserve special attention. Quite often on the doors of many houses can be found a pattern in the form of a pyramid, a symbol of the pagans, borrowed by Christians and interpreted by them as an illustration of the sacred fire on the altar. Today, all roofs of houses are covered with steel sheets, replacing the wooden coverings. This is because steel, unlike wood, does not burn and hardly ever leaks.

The centerpiece of the architectural ensemble of Gammelstad is a large stone church, considered to be the most grandiose building of its kind in all of northern Scandinavia. It was opened in 1492 by Archbishop Jacob Ulfsson Jorifot, as its coat of arms still bears witness. Its rich interior is decorated with a medieval altar painted with frescoes by Stockholm artists depicting the Passion of Christ. The altar has been recognized by many experts as one of the best in Sweden. Completing the picture is a large organ with 4000 pipes, which was installed here in 1971. Next to the church rises a bell tower built in the first half of the 19th century. Other sights in the town include the Separatists’ House, the Evangelical Chapel, the church granary and the seventeenth-century residences of the mayor and the assessor.