The Kangra Valley Railway, winding its way for 164 km through the Kangra valley (from Pathankot to Joginderagar) was built in 1929. Unlike the Kalka-Shimla narrow-gauge railway, which is famous for its hundreds of tunnels, this road is remarkable for the sheer number of bridges (950). This road is less popular then Kalka road, because it is not possible to get to Dharamsala, but other points of the road can be easily reached by bus from Dharamsala (distance 20-65 km, 1 -2 hours). The nearest stop on the narrow gauge railway to Dharamsala is Kangra, the former center of an indigenous principality and an important pilgrimage center. The main site is the Brajeshwari Devi temple, part of the hierarchy of 51 Shakti Pitha and dedicated to the fallen left rudi Sati. The temple is considered one of the oldest in India, but was last rebuilt after the 1905 earthquake. It is located in the center of the city and is surrounded by a block of winding market streets. 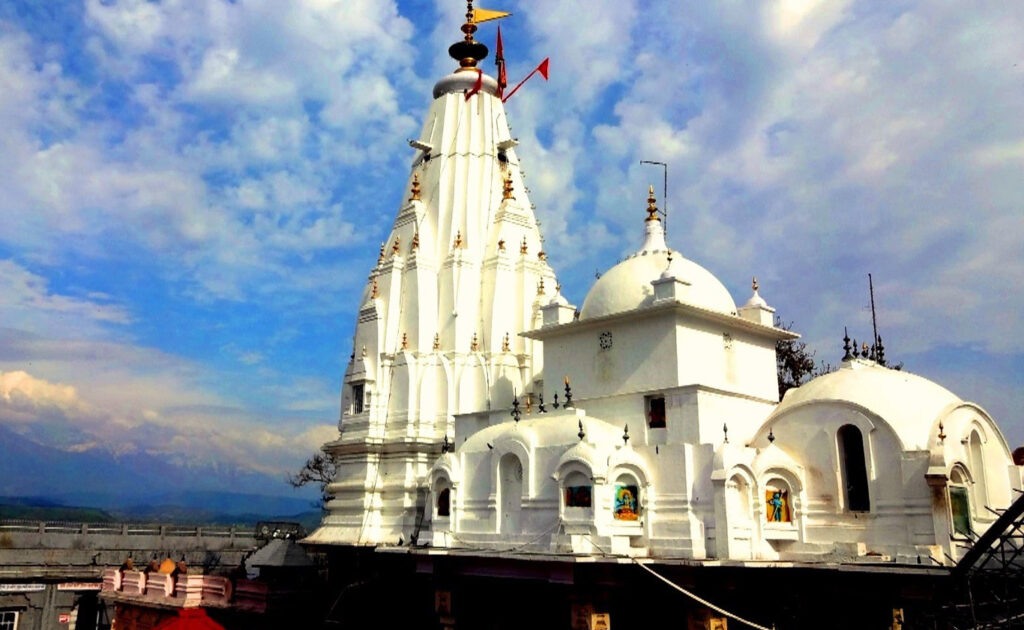 On the outskirts of the city stands India’s oldest fort, recorded in the chronicles of Alexander the Great. From the walls offers a beautiful view of the valley and mountains. Adjoining the fort is the Maharaja Sansar Chandra Museum which contains the ruling dynasty of Kangra, ancient stone sculptures from the local temple and miniatures from the Kangra school. 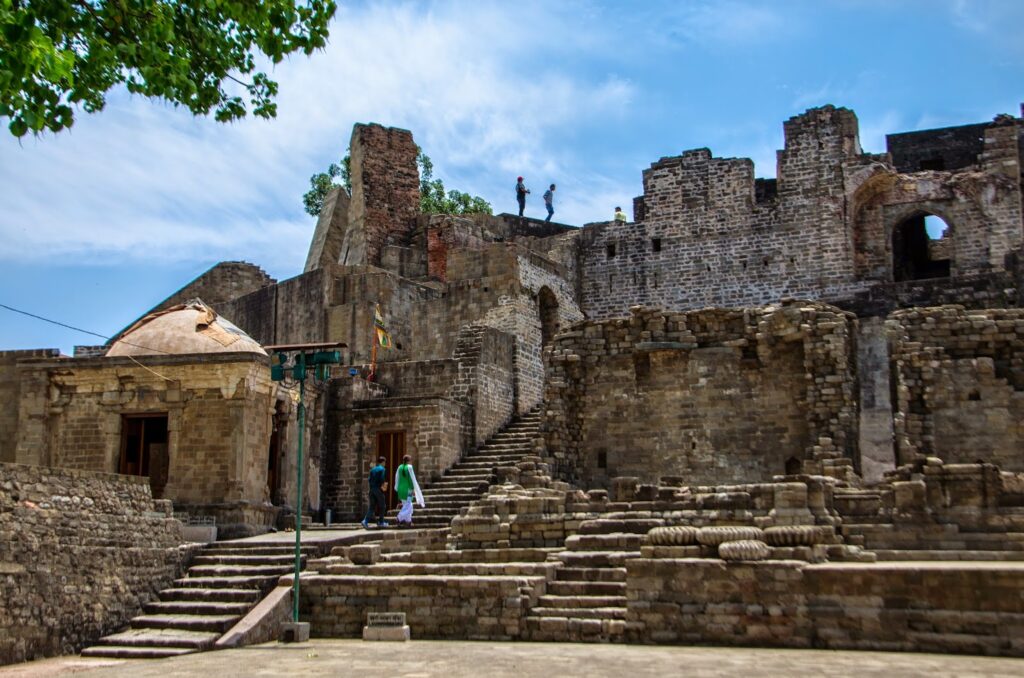 On top of the hill on the other side of the river is Jayanti Mata temple, built by the Gurkhas. The temple and the fort can be reached from the bus station by rickshaw (1.5 km and 4 km to the south). 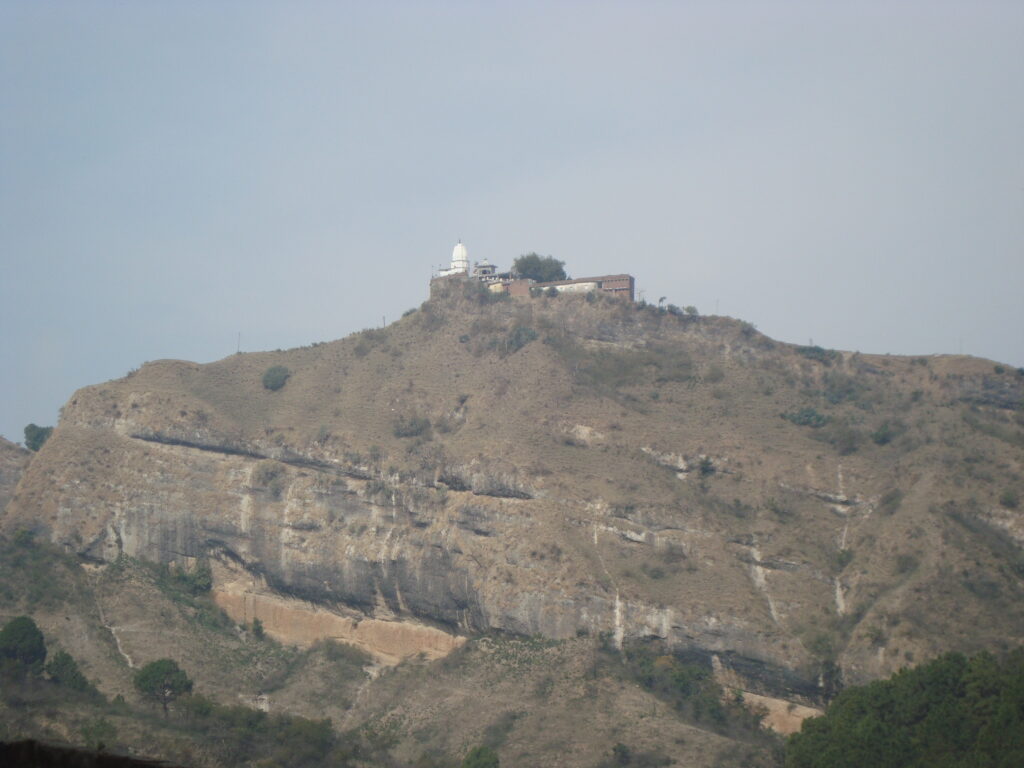 On the 127th km of the narrow-gauge railway is the town of Palampur, surrounded by pine forests and considered the tea capital of northern India. Palampur has many buildings from the colonial period (mansions of the plantation owners) and several hotels at the northern end of the town (3 km from the bus station), behind the Bundla tea plantation. 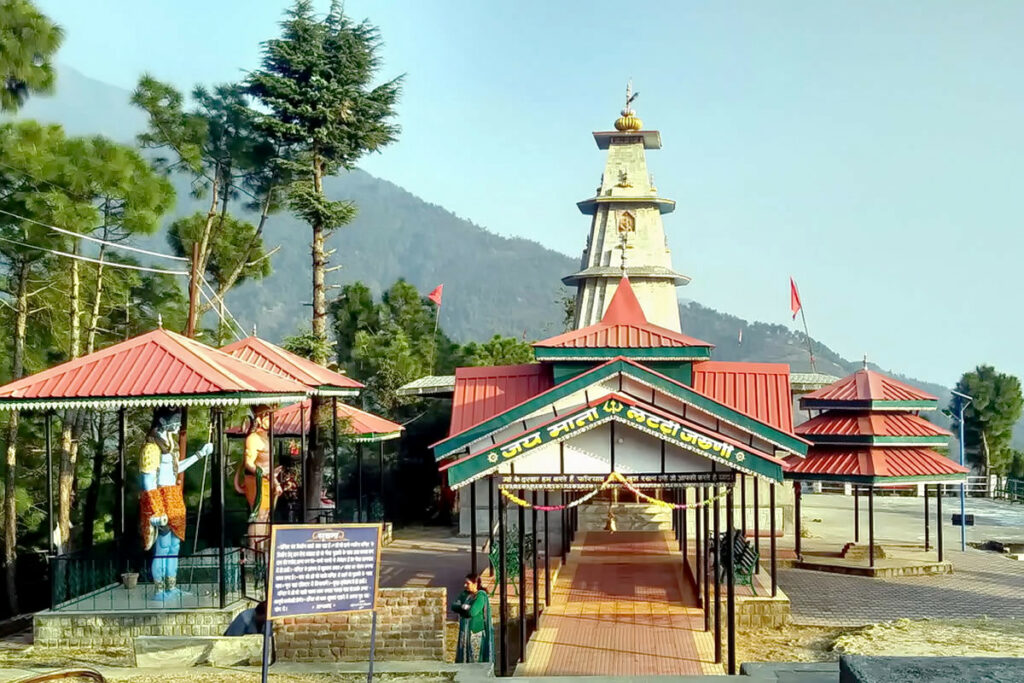 The Neugal Cafe is popular with tourists and has a view of the Neugal Khad gorge, 300 meters wide, through which the bubbling river flows. 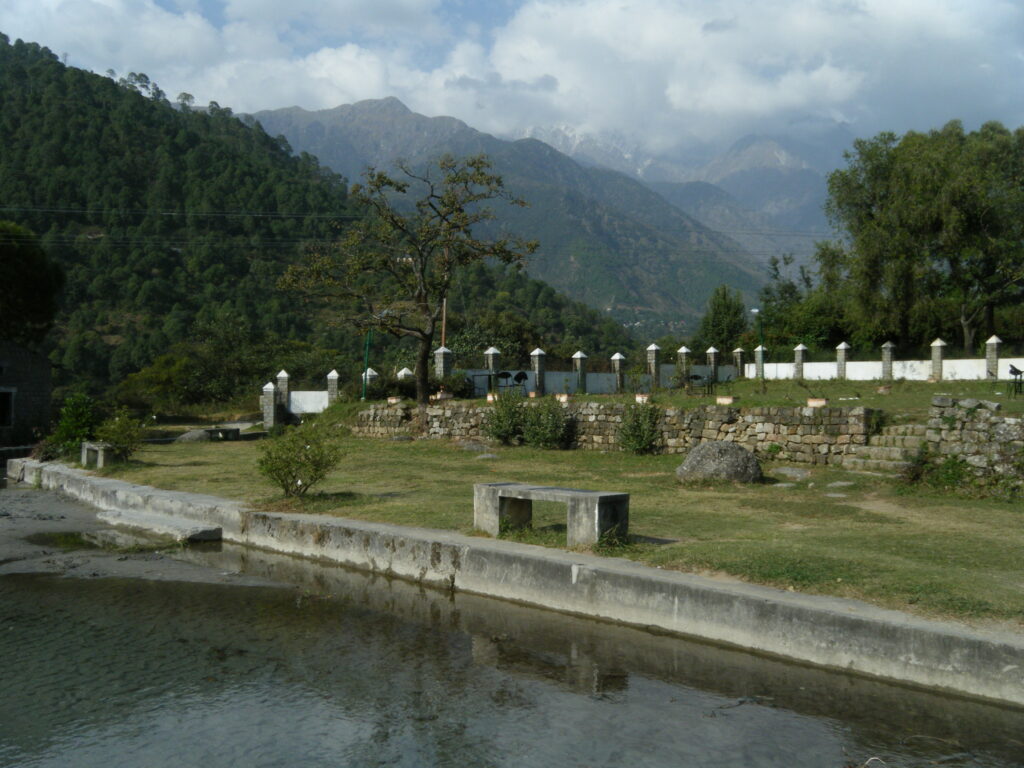 At Bundla, 1 km further, there is a suspension bridge over a stream, a cascading waterfall and the Vindhyavasini temple.

The bus station is on the southern outskirts of the town and the railway station is 6 km to the south. At the 140th kilometer, there is the small town of Baijnath, famous for its magnificent 13th century Shivait temple of the same name. It is considered the most majestic monument of the whole Kangra Valley and is richly ornamented with stone carvings. 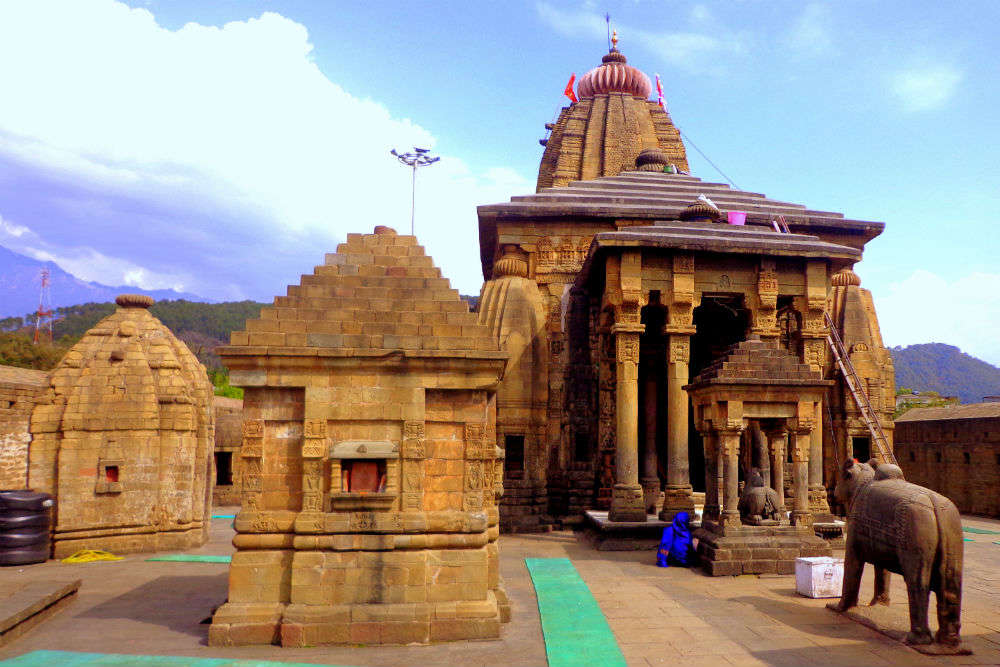 Kilometer 164 is Jogindernagar, the terminus of the narrow-gauge railway, a town of three power stations on a mountain stream, nestled on the slopes of the Dowlandhar Mountains at 1,220 meters above sea level. From here there’s a 12-kilometer Haulage Way System railroad that rises in blue shabby wagons into the Barot Valley at 1,820 meters. It’s a pretty picturesque place with a dam and picnic and trout fishing spots. Halfway up, the Winch Camp glade, surrounded by dense rhododendron thickets, is a good lookout point.

Unlike Shimla or Ooty, the toy trains’, the Kangra Narrow Gauge Railway is not your cute mountain station train, carrying vacationers or honeymooners in first class cars. For a royal sum of 27 rupees for 164 km from Pathankot to Jogindernagar , it is a boon to local passengers, mostly villagers, who use the service because it is cheaper than the bus. Heart-stopping views are guaranteed, finding a place is not.

Built in the 1920s to carry heavy equipment for the construction of the Joginder Nagar hydroelectric plant, the Kangra Railroad is now a living museum of early 20th-century technology — safe, reliable and the cheapest form of transportation for locals. It was not built to ferry the imperial elite to the summer capital; it is not a national treasure like its famous cousin, the Kalka Shimla. Unlike other mountain trains, the views here are not interrupted, and there are only two tunnels on the route. It does not serve any particular mountain station, but its largest station, Palampur Himachal , 10 km from the city of Palampur.

It does not boast many spectacular bridges or tunnels. It is just part of the landscape. But what a landscape. Think of deep gorges, feathery pine forests and mustard fields drenched in yellow sunshine. Think terraced fields gently flowing down valleys, rippling with wheat. Uneven tea gardens shaded by trees. Jade green rivers and silver streams. Ears of drying corn on slate roofs. Rocky riverbeds reflect the crash and rattle of carts. Then imagine, now and then, the green flanks of oak and decadent wraparound hills separating to show that Dhauladhar flashes white in the distance. 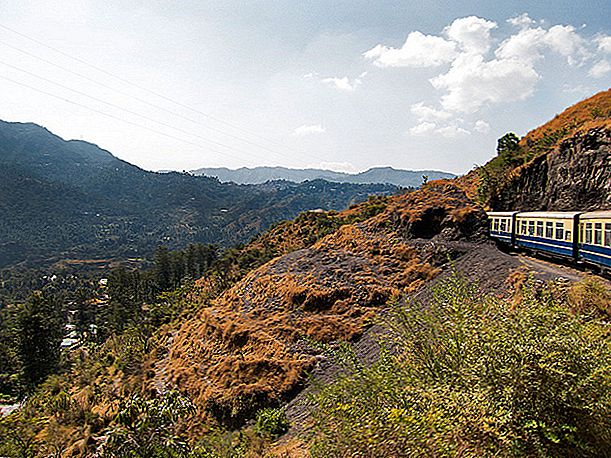 Starting from Pathankot, you pass Ilhauji Road , past the broken bridge at Chakki Ghat , beyond Punjab-Himachal Kandwal to a 30 minute stop at Nurpur Road Junction , More minor stations, Balle Da Pir, Bharmar and Jawanwala Shar follow. You will finally feel the ascent to Harsar Dehri as the distance between the tracks and the valley begins to grow. Below, buffalo and swimmers escape the heat in the many bodies of water, while the odd fisherman awaits his catch. Meander through a maze of hills, valleys, gorges and countless bridges over dams and streams. Brief stops at tiny stations with secluded benches and a banyan tree: Meghrajpura, Nagrotta Surian, Guler, Lunsu and Jwalamukhi Road. Turning north, cross the Batu Hud, stretched by a long viaduct built on a curve with rails about 100 feet above the nalla bed, before knocking the 250-foot Dhoundni Tunnel , Another tunnel is 1070 feet Daulatpuri Surang , Kangra and Kangra Mandir stations offer facing hills located on the diodar and silhouette ranges of Dhauladhar, which will glisten white in winter. From Nagrota , the journey is further uphill.

Stretch pulling Palampur , Baijnath as well as Ahju (the highest station at 4,229 feet) shows a world of tales of rice fields and tea gardens, bridges over deep gorges, rivers below, forests of pine, deodar and bamboo. The glistening squirrels of the dhauladars are better seen on a winter trip. Almost everyone gets off at Baijnath Paprola, where even the train loses a few bogies to deal with the steeper gradient on its future journey to Jogindernagar.

READ
In the hot embrace of Spain

If the train isn’t ugly, don’t rough it completely. Direct yourself to Palampur to explore KVR. For a shorter trip sections of Palampur-Ahju or Palampur-Kangra are good

Pack yourself some snacks and water, but remember there is no public toilet on board!

Facts about the Kangra River

March-June and September-November. Dec-Jan is cold, but with snowy views. Monsons are beautiful, but there are landslides and stops

Pathankot is 259 km northwest of Chandigarh, 476 km northwest of Delhi. It is on the main rail line between Delhi and Jammu and is served by Jammu-bound trains from Delhi, Mumbai, Chennai, and Calcutta.

The options are that you return to Pathankot to catch your train home or leave for Kangra for Gaggal Airport (see Page 160) for your return flight. If you are coming down the road from Palampur, the cab fare is about 3,500 rupees to Delhi via Chandigarh

All trains do not necessarily run every day.

Tickets are available only from stations on the route (not on the network or from other stations).

Only these stations can inform passengers about the trains running on the day.

The Kangra Railway makes for a fearless journey, only recommended for heavy dice and for great slow-motion viewing