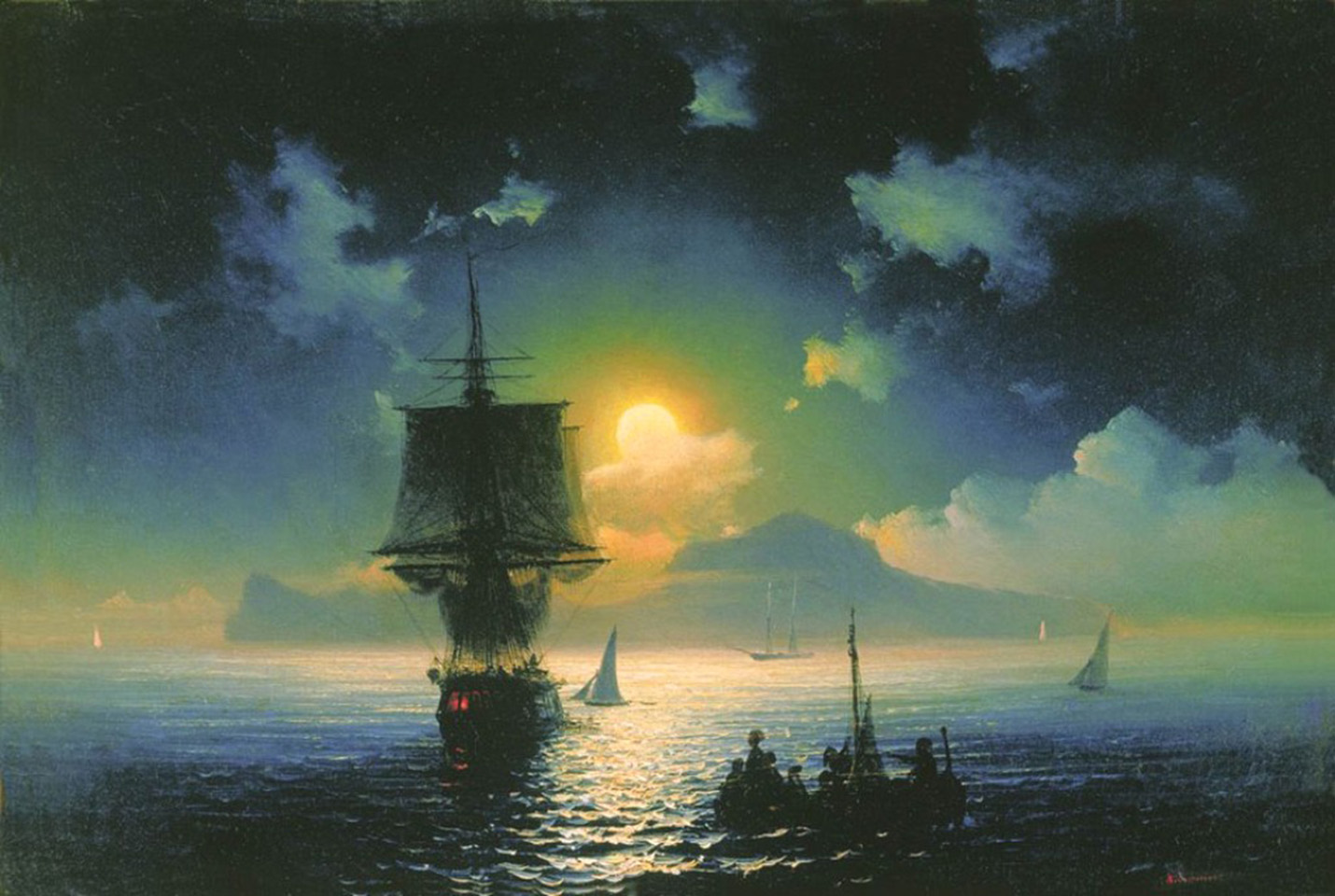 Vladimir Dergachev Ivan Aivazovsky Moonlit Night in Capri (1841). The island of Capri (14 thousand inhabitants) is a world-famous seaside resort with a mild subtropical climate. It is located in the southern Gulf of Naples, about 10 km south-west of the tip of the Cape Campanella of the Sorrento Peninsula, is part of the Italian province of Naples in the Campania region. Capri is one of the world’s symbols of Italy, rich in historical memory.

The name of the island may be derived from the Latin caprea – “goat island” or the ancient Greek κάπρος – “boar”.

A relatively small island of 10.4 sq. km (3 by 6 km) with the highest point of Monto Solaro (589 meters) is mostly formed by limestone. Its steep shores are full of natural arches and caves. The dolomite cliffs give the island an extraordinary beauty against the endless emerald sea.

Marina Grande, the island’s only port, is located on the northern coast, where you can climb the mountain serpentine or take the funicular to the city center. On the south coast there is a small harbor, Marina Piccola. 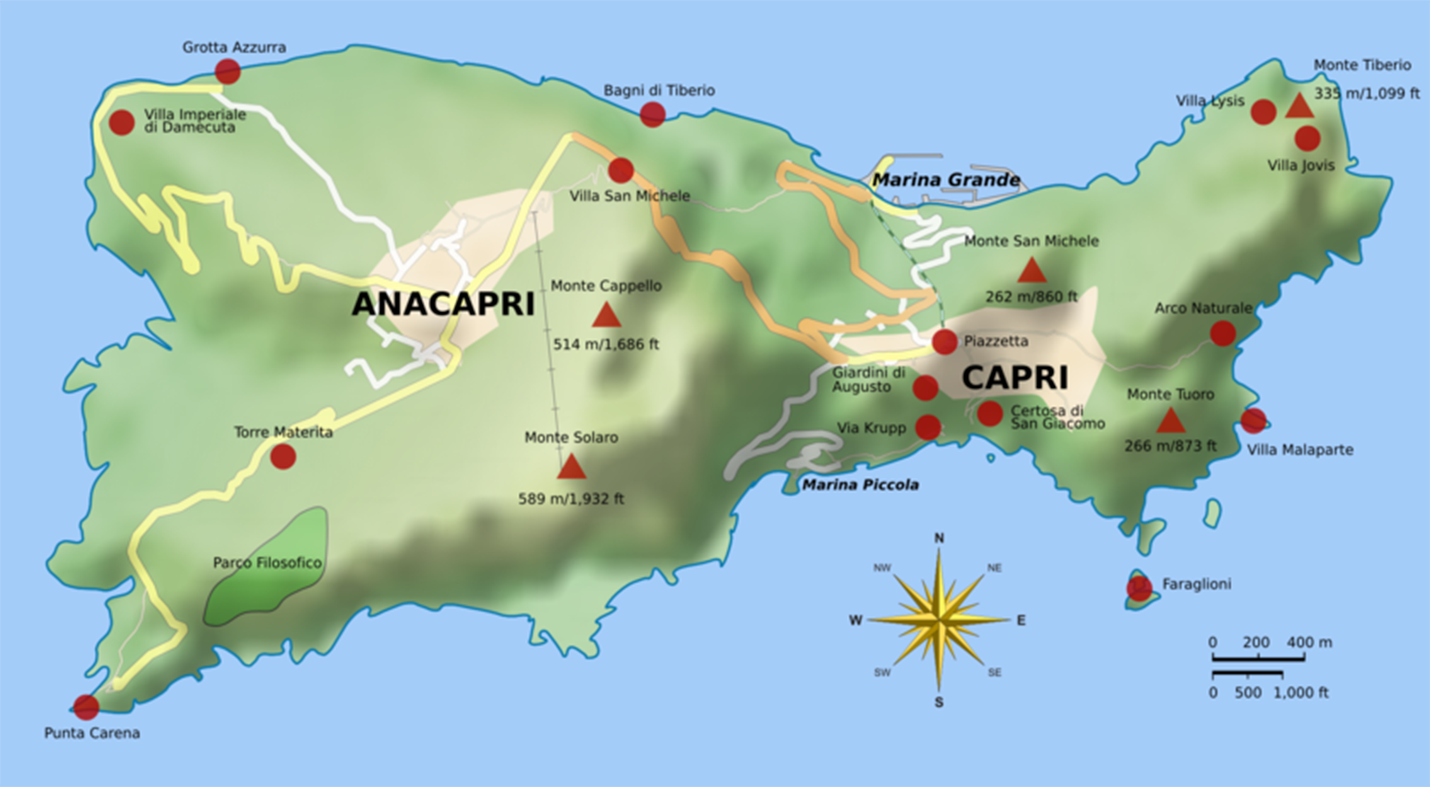 Capri, the main town, is home to most of the island’s permanent population, while the inland town of Anacapri is home to many wealthy villas.

Supposedly, the first settlers of Capri were experienced navigators (Tathians) who discovered the island in the 8th century BC. Since 330 BC, Capri became a province of Naples with two island feuding tribal communities – Capri and Anacapri. In 29 BC Emperor Augustus acquired the island, giving the Neapolitans Ischia as compensation. The first villa on the island was built by his order.

The emperor Tiberius owned the island from 27 to 37 years, when the port was built and twelve villas were built. Due to the increase in population, fresh water tanks and a warning system for approaching pirates were created. Already in this era Capri gained the fame of an island of “beautiful idleness” for the Roman nobility.

After the fall of the Roman Empire, the island was ruled by the Duchy of Naples. Beginning in the VI century, the island was subjected to devastating raids by the Saracens (Eastern pirates), stealing the local population into slavery. Capri became a transit point for the pirates’ further raids on the coast of southern Europe. After the success of the military operations against the Saracens, Louis II (825 – 879) gave the island to the Duchy of Amalfi in gratitude for the support of the military and diplomatic operations against the Arabs. The Lombards, Normans, the Angevin dynasty and the Aragonese then took over the island. From 1513 to 1546 the Mediterranean, including Capri, became the object of numerous attacks of the Ottoman fleet led by Khair ad-Din Barbarossa. A period of Spanish rule follows, followed by the Bourbon dynasty, then the French Napoleonic occupation (1806 – 1815).

By the beginning of the nineteenth century, Capri was already famous throughout Europe as one of the most exotic vacation spots in the Mediterranean for magnates and … the Mafia, and then the Bolshevik leaders. Modern expensive Capri has become a caprice of nature, visited by wealthy citizens who can afford any whim.

Today the local population is engaged in tourism, subtropical farming, horticulture and fishing. Communication with the land is by ferry and private boats.

Main attractions . On the north coast of Capri is the Blue Grotto. It’s a natural depression in the rock (60 by 25 meters) illuminated by sunlight coming from a crevice under water, with an entrance height of only one meter. Because of the unexpected effect of the underwater window, which emits a bright beam of sunlight, the traveler who enters here feels as if he is floating in the air. Sea water absorbs the red range of light, so its blue color is saturated. For centuries, sailors thought the grotto was a place of demons or an ancient sanctuary. This natural wonder is glorified in the picture of Aivazovsky “Azure grotto.

The Villa San Michele was built at the end of the nineteenth century and turned into an archaeological museum. From the round alley there is a unique view of the Bay of Naples. The Blue Grotto and Villa San Michele are the main tourist attractions of the island of Capri.

Another local gem is the Faraglioni . These three reefs soar high above the abyss with obelisks almost a hundred meters high. The middle reef has a natural arch that you can swim through. 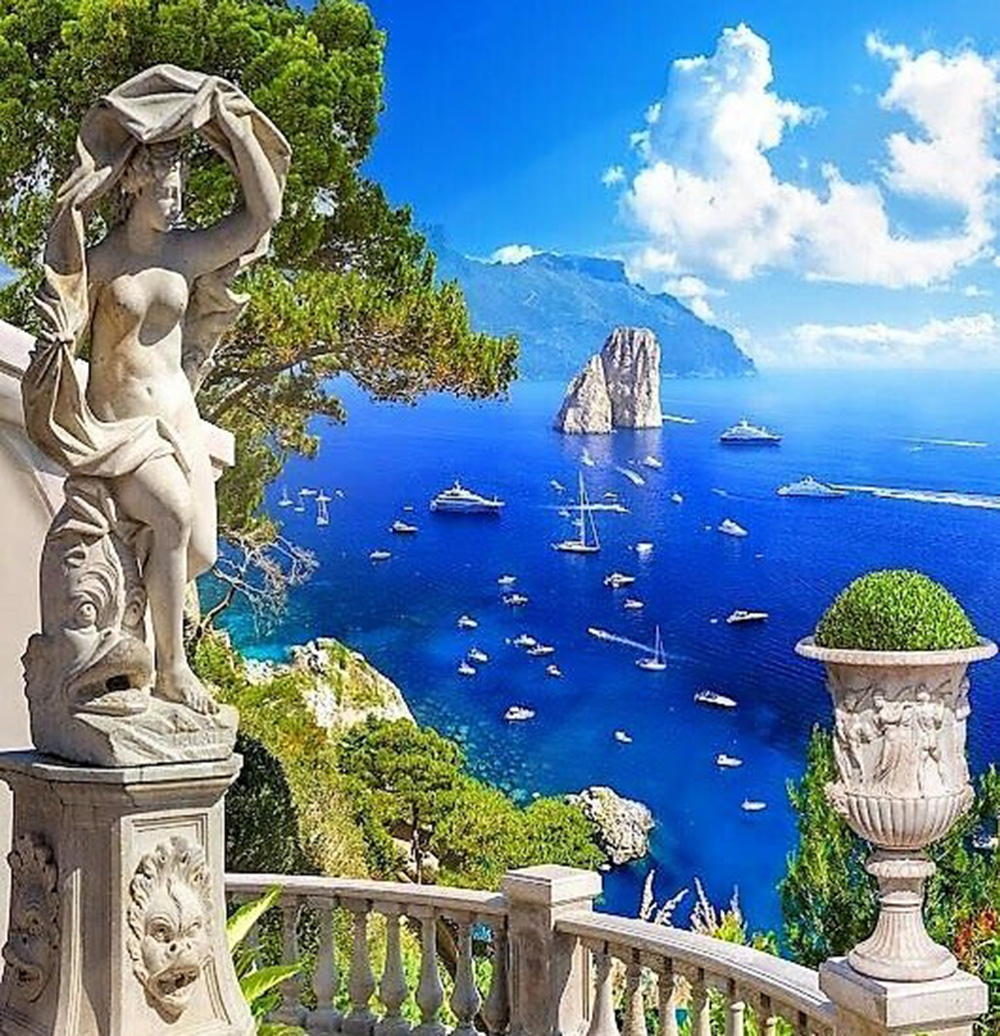 Jupiter’s Villa is the largest of the 12 villas built by Emperor Tiberius on the heights of Monte Tiberio on the east side of the island. Its terraced location was dictated by the rocky terrain. Rainwater reservoirs were first created here. It offers a panoramic view of Ischia, the Bay of Naples and Salerno. https://cs11.pikabu.ru/post_img/2018/07/06/10/153089962714367230.jpg

Mount Monte Solaro (589 m) is the highest point on the island with spectacular views. You can climb it by cable car from Anacapri or on foot. From the top you can see Naples, the gulf and the southern tip of the Apennines, up from the “Phoenician stairs”, believed to date from the seventh to the sixth century BC. 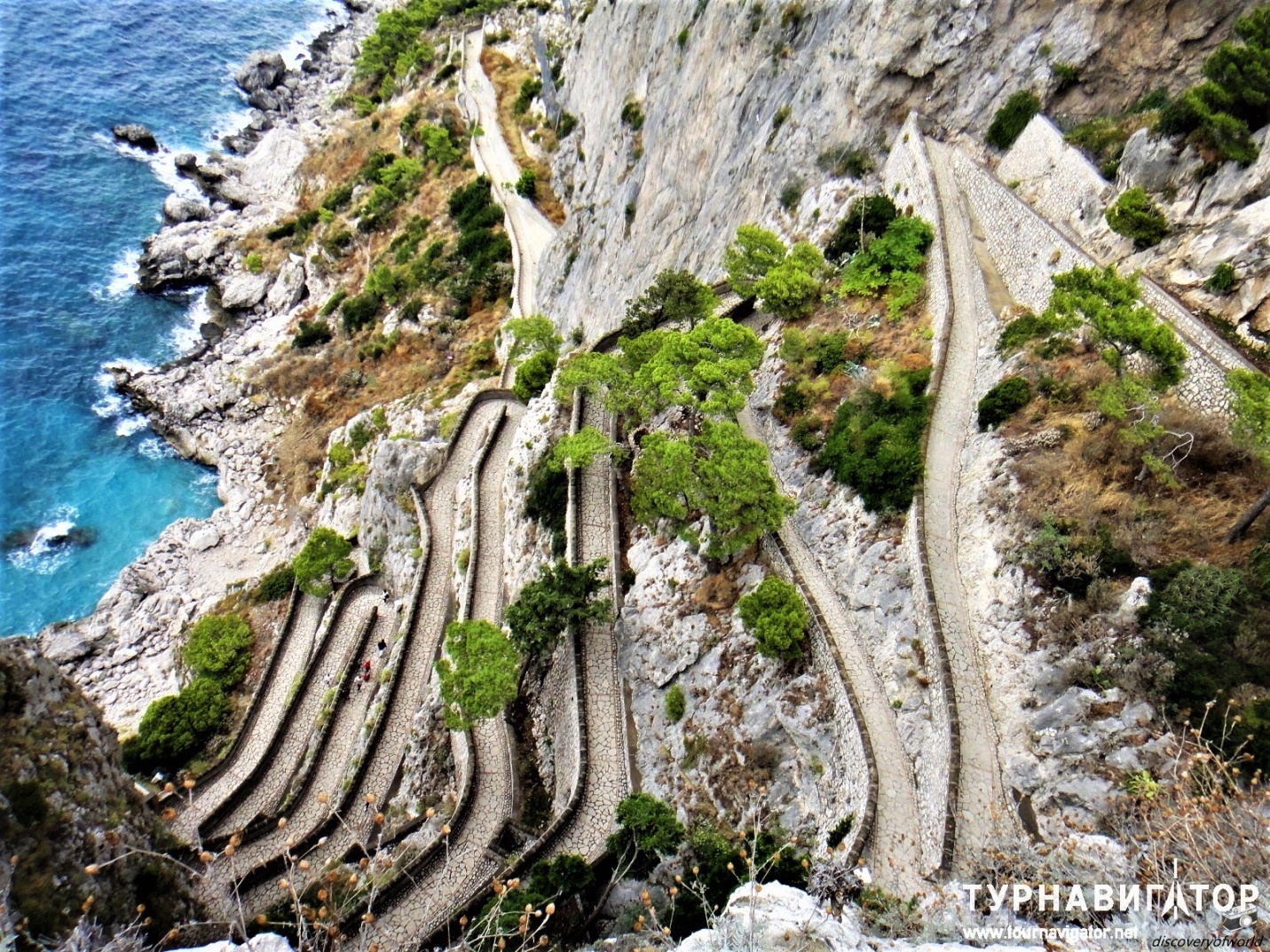 From the park (Gardens of Augustus) begins the Via Krupp, one of the most spectacular streets in the world: it is a very narrow serpentine street, covering a descent of about 100 meters.

Capri. A sweet life for a life without poverty for celebrities and fiery revolutionaries. The beauty of the island is impressive, as is the healing sea air. Not without reason politicians, the European elite, Russian artists, musicians, writers and poets, along with the Mediterranean French coast, loved this luxurious resort. As the great proletarian writer Maxim Gorky summed it up, “Here you get drunk and bald and can’t do anything.” The island has been visited by many celebrities, including:

READ
By car through Istria. Traveling through the pearl of Croatia

Capri was favored by bohemians in search of an ideal place to live. But among the celebrities, the proletarian writer Maxim Gorky stands out. In January 1906, as a famous writer, he, on behalf of Vladimir Ulyanov (Lenin), traveled through Finland, Sweden, Germany, Switzerland and France to America to raise funds for the party treasury. He was accompanied by his common-law wife, actress Maria Andreeva, and bodyguard Nikolai Burenin. After visiting New York, Boston, and Philadelphia, the writer raised a considerable sum for those days and settled on Staten Island at the mouth of the Hudson River at the estate of American patrons, where he began to write his famous novel Mother. Soon, however, a scandal broke out in the American press about Gorky’s bigamy, and he had to return to Russia, but in October 1906 he left for Italy to emigrate. On the pier in Naples Gorky was met by a crowd of Italians, for whom the writer was a hero in the spirit of Garibaldi, who had miraculously escaped the tsarist regime. Gorky chose the picturesque and secluded island of Capri as his dwelling place in those years.

On the island, the writer enjoyed the unprecedented respect and adoration of the locals. “Massimo”, as the Italians called him, became so attached to the island that they named a street after him, and since 2009 Capri has established a literary prize named after the great writer.

The narrow pedestrian picturesque street on which there is a villa of Maxim Gorky, Il Sorrito, where he lived for two years from March 1909 to February 1911, was treated for consumption and founded the party school. Lenin visited him twice at the writer’s invitation. Now a plaque hangs here.

As a result, Gorky lived abroad for a total of over 18 years, of which 15 years in Italy. Interestingly, during this time he did not master any foreign language, having learned in Italian only one phrase – “buona sera” (“good evening”).

Gorky stayed in Capri for seven years. Gorky and Andreeva first stayed at the famous hotel Quisisana, where his great friend Fyodor Chaliapin also lived. Today, the Grand Hotel Quisisana 5* (150 rooms), founded in 1845, thrives and is part of the association The Leading Hotels of the World. In November 1906, Gorky stayed at the Villa Blaise, one of the most beautiful places of Capri (today the Villa Krupp Hotel is located there). The terrace offered a marvelous view of the sea and Marina Piccola Bay. Then Gorky lived at Villa Herculaneum (also known as Villa Spinola and owned by the German bacteriologist Emil von Bering). These places became a kind of cult. Many famous compatriots visited the writer here – from the future Nobel Prize winner Ivan Bunin to theater reformer Konstantin Stanislavsky. Many other guests from Russia visited Gorky: Chaliapin, Novikov-Priboy, Leonid Andreev, Lunacharsky, Dzerzhinsky, and many others. Gorky was a very hospitable host: “Come,” he wrote to the actor Vasily Kachalov, “we will bathe in the blue sea, catch sharks, drink white and red Capri and live in general… You will have an excellent vacation… 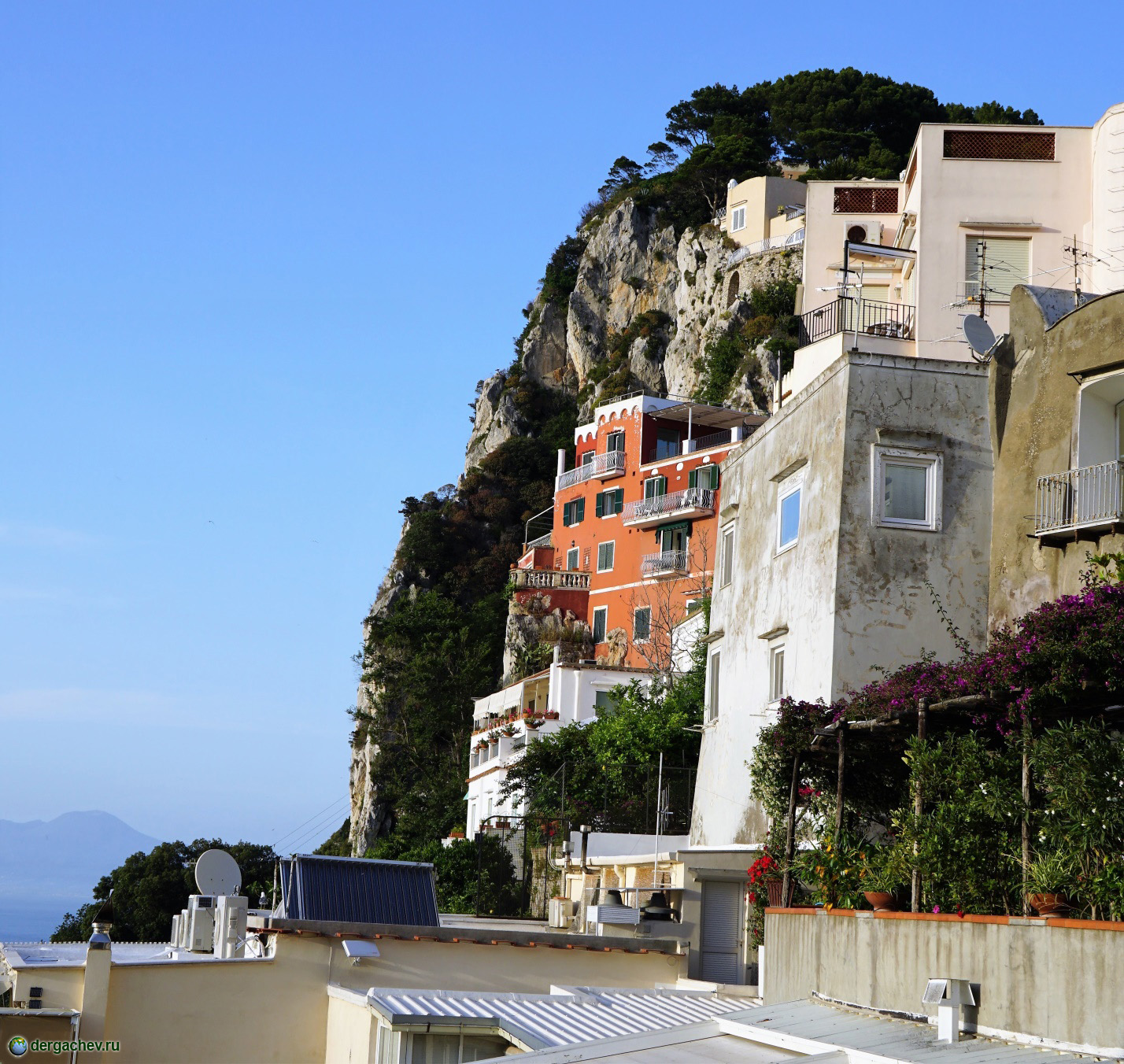 Twice, in 1908 and 1910, Vladimir Ulyanov (Lenin) came to Capri, including with his mistress Inessa Armand. Indeed, his wife Nadezhda Krupskaya was not in harmony with the Neapolitan scenery. The harsh beauty of Siberia, where the future leader of the world proletariat checked out Nadezhda Krupskaya from St. Petersburg, is another matter.

The Higher School of Propagandists was founded at the Villa of Capri Island under Gorky’s leadership and with Andreeva’s active participation. Bogdanov and Lunacharsky took part in creating the Party School of the RSDLP. And Lenin combined his vacation in Capri with the struggle with “heresy” in the Party school, where the classes were not quite “according to Ilyich. Probably Ulyanov’s vindictiveness also played a role, as he saw in Bogdanov a rival to his party career. Alexander Bogdanov had previously been called the vice-leader of the Bolsheviks. In the summer of 1906, after reading Bogdanov’s newly written book Empiriomonism, Lenin, by his own admission, “became unusually angry and furious. Disagreements over the control of the Bolshevik cash register became especially acute and in June 1909, at a meeting of the expanded editorial board of the newspaper Proletarian, Bogdanov was expelled from the Bolshevik Center and then in January 1910 at the Paris Plenum was removed from the Central Committee of the RSDLP. 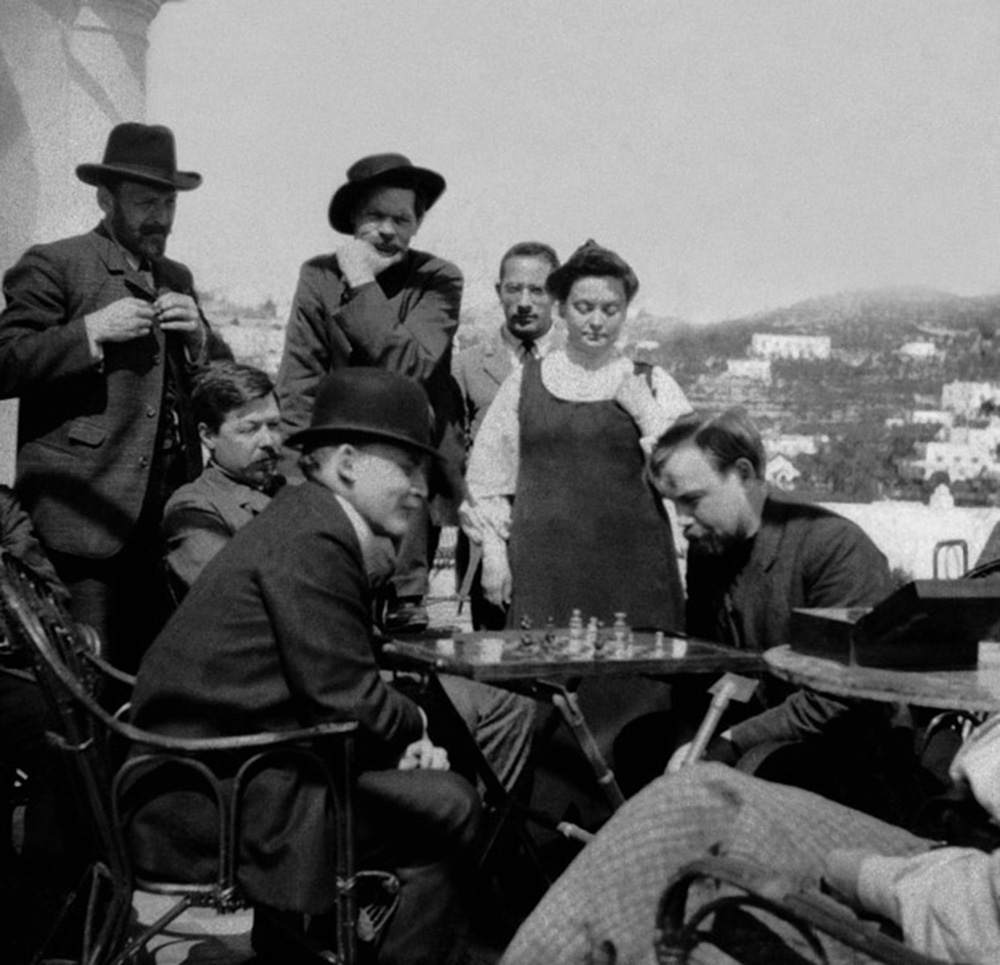 The future leader of the world proletariat demonstrates to Italian fishermen a master class in how to fish, wearing a white shirt and tie and uncovered bald head under the searing Mediterranean sun. The volcano Vesuvius can be seen at the top left. 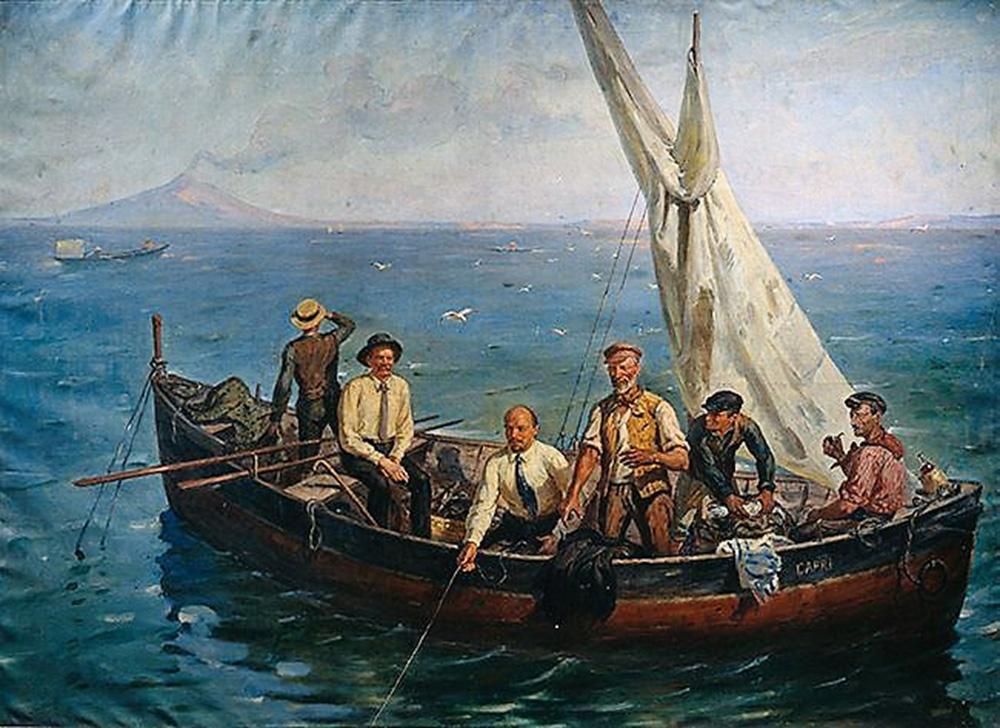 Painting by Efim Cheptsov, “Lenin and Gorky with Fishermen in Capri” (1931).