A symbol of freedom: Monte Titano in San Marino

A small “state within a state,” San Marino is located in Italy and is a complete enclave (that is, surrounded on all sides by one country). There are only three such states in the world). Nevertheless, San Marino – it is an independent full-fledged state with its history, culture, traditions and sights.

The capital city of San Marino has its own outstanding attraction – Mount Titano with three ancient towers.

The birth of the state

The year 301 can be considered a starting point in the history of the tiny state when the stonecutter Marin appeared in these parts hiding from the pagans persecuting him. Several other early Christians arrived with him.

In time a small Christian parish appeared at the foot of the mountain and a citadel was built on the summit of Monte Titano, which gradually grew into a Christian community. After his death, Marin was canonized for his ascetic life and the town was named after him, after which it developed from a Christian village on Monte Titano. 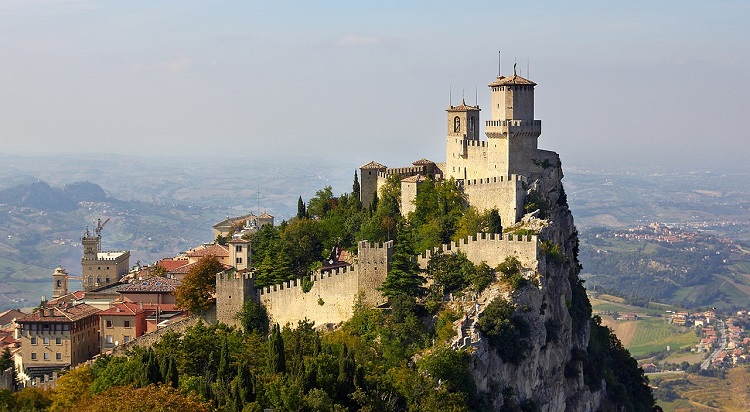 The city of San Marino was founded on September 3, the feast day of St. Marin. The Church of San Marino del Santo Pieve (built in the 19th century) houses the relics of the saint and his skull is kept in a special chest. The church of San Pietro was previously the site of the relics, but after the new church was built the relics were moved there.

At first the city belonged to the jurisdiction of the Duchy of Urbino, and later, when Italy began to break up into many independent territories (VI century), the territory of San Marino became relatively independent. The republic attained full independence in 855.

The main slogan of the Republic is “Libertas”, i.e. “freedom”. The legends of San Marino say that, on his death, St. Marin said: “I leave you free of both.”

READ
National holidays and festivals around the world in August

Since then, the principles of freedom and independence have been the basis of the small state.

Do you know what Piazza Cavour in Rimini is famous for? We will tell you about the most visited sights of the city on our website!

In the following material you will learn about another landmark in Rimini – the Bridge of Tiberius, as well as about the famous legend associated with this structure.

And in this wonderful city there is also the famous Triumphal Arch of Augustus, the main symbol of Rimini! Read the history of the origin of the structure here.

Description of the sights

Monte Titano is a part of the capital of the republic, the city of San Marino. The city begins at the foot of the mountain, then the serpentine rises higher and higher, to the very top. At the bottom of the valley the houses are more modern, but as the road ascends the mountain, more and more houses built centuries ago can be found.

The mountain belongs to the Apennine mountain system, built of limestone. The altitude is 750 meters above sea level. The Adriatic coast of Monte Titano is 13 kilometers away. 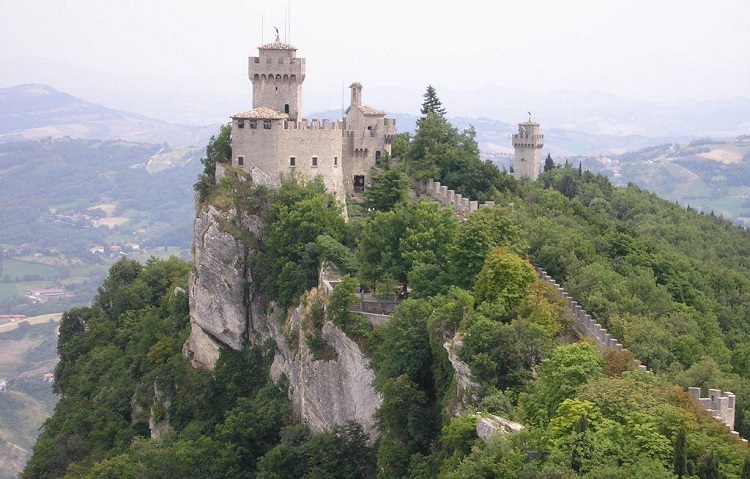 The mountain has three peaks – and on each of the peaks is built a citadel (make up the complex of the Three Towers – Cesta, Guaita and Montale). These three towers are not only medieval fortresses and sights of San Marino, but also symbols of the city and the republic – images of the three fortresses can be seen on the coat of arms and the flag of San Marino.

In 2008, the 32nd session of the Council of UNESCO decided to include Mount Monte Titano and a number of other monuments situated on the mountain in its list of World Heritage Sites.

All these sites are monuments of medieval architecture and include: three guard towers, several nunneries, a 19th century basilica, Palazzo Publico (Government Palace) and Teatro Titano.

READ
The most romantic places in Milan, Italy

The surroundings of the capital.

The entire territory of the “Luminous Republic” is divided into 9 castle towns (administrative districts). The state is one of the most visited places by tourists – about three million tourists come here a year.

The main highlight of these places is almost completely preserved medieval architecture and atmosphere. Old castles and towers, stonework, narrow streets – everything has remained almost unchanged since it was built.

If you want to see how the city looked like in the Middle Ages, you must visit in July. It’s then that time of year, when the traditional annual festival, Days of the Middle Ages, takes place. 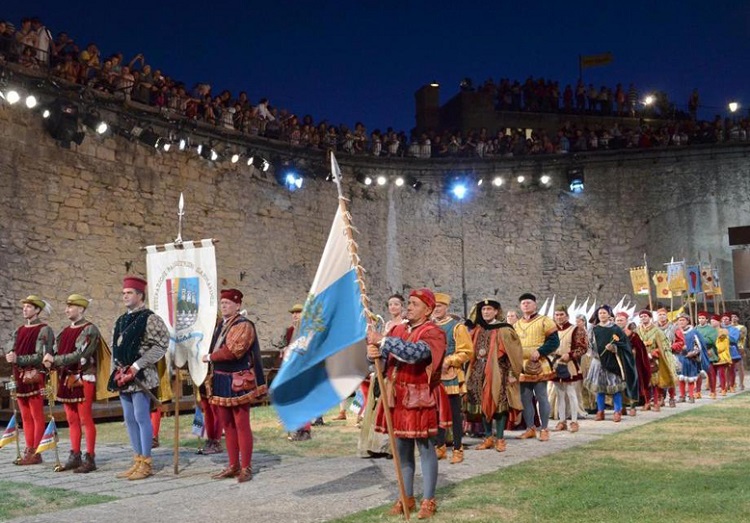 Locals dress up in period costumes, scenes of real historical events are enacted for tourists. Add colorful festivals and processions, crossbow fights, street performances and spectacles and you have a truly unforgettable show.

Traditional market in San Marino during the festivals will please you especially – you can not only get acquainted with local handicraft products, but also participate in master classes on crafts.

The area around the capital is rich in historical monuments. Thousand year old temple complexes, the Castle of Montserreto, the Church of St. Andrew and other examples of medieval town planning are worthy of a place in the list of attractions of the Republic.

We have also reviewed the best and most comfortable hotels in Italy by the sea for your unforgettable vacation!

And what can you see in Rome? Unusual places and descriptions of famous sights of the city look for in this article.

Have you heard about the square on which St. Peter’s Cathedral in Rome is located. You can find a photo and history of the construction of the majestic structure here: https://expertitaly.ru/dostoprimechatelnosti/rim/sobor-svyatogo-petra.html.

READ
Top 5 things to do in Bangkok, Thailand

Once the entire mountain was surrounded by powerful fortress walls that created a ring of protection around the towers. Today only fragments of walls and parts of fortifications remain of this defensive complex.

The towers are now one of the city’s main attractions.

Guaita, built in the 11th century, is the first of the fortification complex (its second name is Prima Torre, which means “the first tower”). It once served as the city’s prison; today it houses the Museum of the History of San Marino and the Artillery Museum. 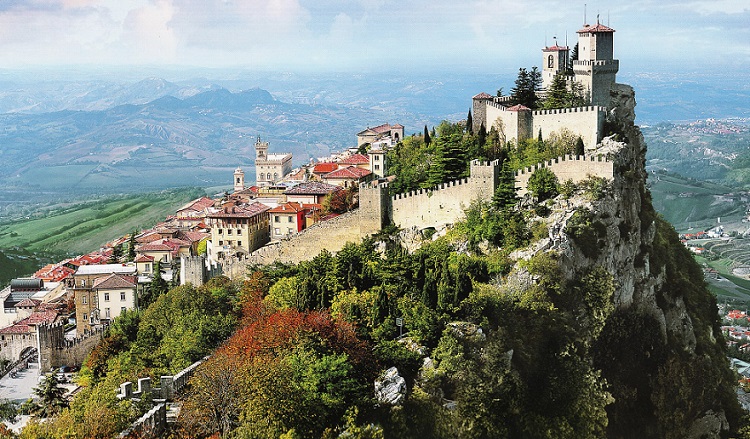 The second tower, Cesta (Seconda Torre), was built a century later, in the middle of the 13th century (it now houses the Museum of Old Arms, opened in 1956). These two towers are open to tourists. 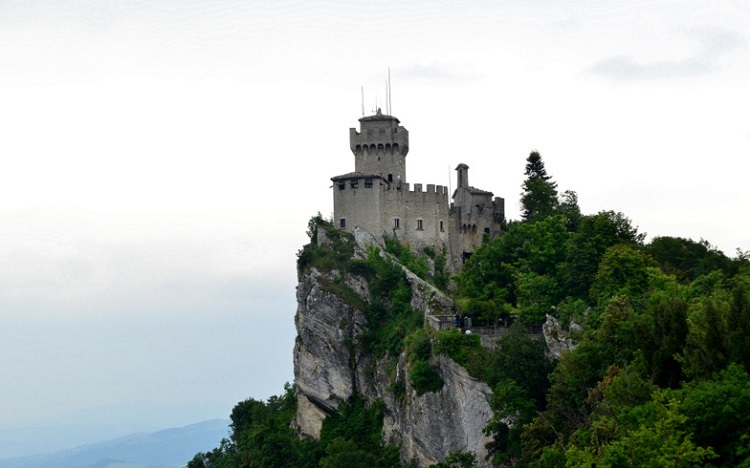 The Museum of Arms has both ancient weapons and modern models. Among the ancient weapons only a part is authentic, the rest – the skillful copies made with precision to the smallest detail. By the way, if you have purchased such a copy in a souvenir shop, do not forget to bring the accompanying documents for customs control, otherwise the customs officers simply will not allow to export these souvenirs, and they will not leave the borders of San Marino.

But the third fortress – Montale (or Terza Torre) – is closed to visitors, you can see it only from the outside. Montale has a pentagonal shape, and in ancient times served as a signal tower. 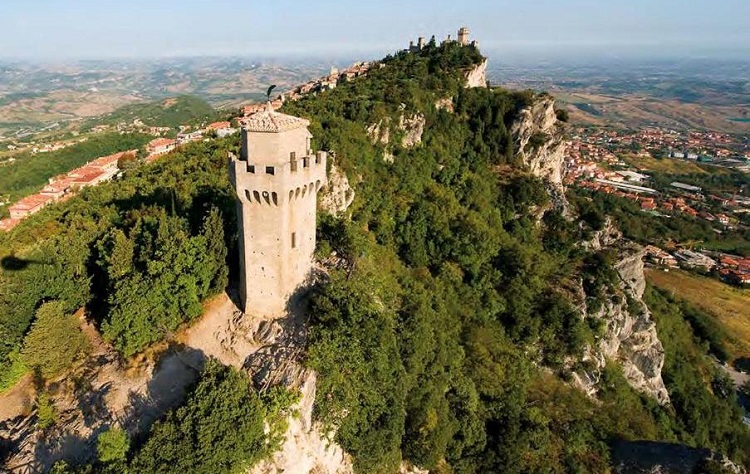 The most visited is the Guaita Tower. Those who dare to climb to the observation deck (through a narrow passage of vertical stairs) will be rewarded with a view of the republic and its surroundings.

Learn even more about the little state located on Mount Titano by watching this video:

The easiest way to get to San Marino is from Rimini or Bologna, which are the cities closest to San Marino. The most convenient way to travel is by car or by bus (trains do not go here because of the difficult mountainous terrain).

Those who travel by car should remember that the road leading to the top, has a great slope, so all cars are parked with the wheels twisted – in case the parking brake fails.

If you want to leave a mark in your passport about your visit to San Marino (in memory of a stay in the tiny state), it can be done in a special office in the capital (the cost of services – 5 euros).