The Grand Palace in Peterhof

The majestic and refined Grand Palace of Peterhof whose facade extends along the terrace for almost 300 meters dominates the composition of the Peterhof ensemble, linking the Upper Garden and the Lower Park into a single artistic whole. “Spreading its wings” over the water fairy-tale of the Grand Cascade, it combines and forms around itself a harmonious system of alleys, architectural constructions and fountains.

The existing look of the palace has been shaped for almost a century and a half. During Peter’s epoch it was a small two-storey building, the width of which did not exceed the width of the Great Cascade, it was called Upper or Nagorny palaces and served for receptions and feasts. The idea of location and the initial shape of the palace belonged to Peter himself, and it was embodied by architect I. Braunstein and such prominent architects as J.-B. Leblon and N. Miketti. In 1732 two galleries were added to the palace to the design of M.Zemtsov, but the modest Peter’s Palace did not meet the splendour and luxury of the Russian court of that time.

This was the reason for the alterations carried out by Rastrelli. The favourite architect of Empress Elizabeth had a difficult task to fulfil – not only to create a jewel of Elizabethan baroque, but also to preserve the walls of the Petrine palace, integrating them into the new surroundings. Rastrelli coped with the task brilliantly. One more storey was added to the palace, the central space was enlarged considerably and wings of one-storey galleries were added to it with lateral blocks – the Church Block and the Block under the coat of arms. The interiors of the palace, created by the architect, struck with dynamics and fabulous luxury. The walls of the halls were decorated with gilded carvings, mirrors created the impression of endless perspectives and visually enlarged the inner space. The Oak Study of Peter the Great, preserved by Rastrelli, became a relic, placed in a splendid frame of the new palace.

In the 1860s and 1770s baroque splendour went out of fashion, and the interiors of the palace began to take a different shape, in line with the new style – classicist. At that time stucco compositions were the main decorative element, giving the impression of nobility, simplicity and refinement of artistic taste. By order of Empress Catherine II, the architect Felten redesigned the Dining Room, Throne and Chesmen Halls, while Jean-Baptiste Vallin de la Mothe created two Chinese rooms in 1766-67.

The palace underwent changes in the 19th century. In 1846, by order of Emperor Nicholas I, in the east wing overlooking the Upper Gardens the architect A.I. Shtakenshneider built the third floor and created eight interiors for the wedding of his daughter Olga Nikolayevna with Prince Charles of Wurttemberg. Since then, the eastern wing has been called the Olginsky half of the Grand Peterhof Palace.

The architectural appearance of the Grand Palace, formed as a result of all the rebuilds, bears the distinct traces of different artistic tastes and styles, but talent and professional respect for each other allowed architects of different eras to create a complete work.

For a long time the Grand Palace of Peterhof was the center of social life. Holidays, receptions, balls and masquerades were held here, to which up to three thousand guests were invited. In the court church weddings were held, children were baptized and prayers were served to commemorate military victories.

During the Great Patriotic War the Great Palace was burned and blown up. It seemed that it would be impossible to raise it from the ruins. But in May 1964, the first rooms that had been restored were opened. And today visitors are taken on a fascinating journey through the magical palace, filled with decorative and applied art objects, magnificent furniture and superb works of sculpture and painting.

READ
The best guide for planning a road trip in America 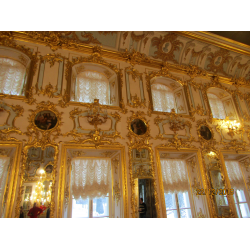 Peterhof is beautiful in any weather! For me, as a native resident of the “Russian Versailles” this is just a given. I think, and many tourists could get tremendous pleasure from visiting Peterhof Park and the palace, even “out of season”. Especially.

The luxury, the splendor and the ineffable atmosphere.

Last summer I made an unforgettable trip to St. Petersburg, which I had long dreamed of. I just fell in love with this city, this mixture of gloom, depression, grandeur and beauty captured my soul. Today I want to tell you about our visit.

A fascinating journey through a fabulous palace.

Gorgeous furniture, wonderful works of art and sculptures, arts and crafts and more.

Hello! On one of the days of our June visit to St. Petersburg, we decided to visit the famous Peterhof palace and park complex. We got to Peterhof by bus from the subway station “Avtovo”. It was drizzling rain outside and we decided to start with.

The luxurious palace, rebuilt after the destruction of the war years, the decoration of the capital of the fountains.

Wonderful interiors. Great excursionist who was able to convey her love for the palace. Not many visitors, even on weekends in winter.

Hello! Today I would like to tell you about visiting one of the most beautiful and beautiful palaces in the suburbs of St. Petersburg, the real decoration of the capital of fountains, as Petrodvorets (aka Peterhof) about the Big Peterhof Palace. This palace is located a little.

+ Appeal to the history of Russia. + Everyone should visit this place. + This place was the beginning of the empire. + It’s beautiful. Beautiful as a king.

— The interiors are striking, but not exciting. — The palace is uncomfortable to live in. — Skullduggery with entrance tickets.

As they say, it’s time to travel in Russia, so quietly crept up moments ago, when the magical city of St. Petersburg again begins to be considered as a real alternative for scientific and educational and cultural tourism. And me, Znaiku Zaznaiku, this fate did not.

READ
The 20 most beautiful islands in Greece

“Peter left us palaces, we must keep them all.”

I have come to Peterhof before, I saw the Grand Peterhof Palace, but the impressions of his visit over time faded. And when thinking about what to fill the free half day in St. Petersburg, we decided to go to Peterhof. It is beautiful.

Everything is very impressive.

During the June white nights we visited the city of St. Petersburg with the whole family. One of the items on our “minimum program” was a visit to the federal state budgetary institution of culture “State Museum-Reserve “Peterhof” and the Grand Peterhof Palace with a guided tour. It was about this.

Amazing interiors created over several centuries and restored over several decades, an interesting and professional guide, a huge number of beautiful objects of art, excellent condition of everything in the palace, no pandemonium

In summer we go to Peterhof “for the fountains”. After a walk in the park, given its size, the strength to visit the palace does not remain. But in winter – the best time to visit the Grand Peterhof Palace! And walk around the palaces.

“All gold, all bright, all floats from hall to hall through the lush enfilades. “

Greetings to you, dear friends! Having been in St. Petersburg and visited the magnificent Lower Peterhof Park Peterhof Fountains, we could not pass by the Grand Peterhof Palace. Ticket for an adult citizen of the Russian Federation was 600 rubles, the student.

The grandeur of the empire is felt here in full measure

The splendor, grandeur and rich decoration, one touches the history of their country, the tremendous work of the restorers

In August 2019, my son and I spent a week in St. Petersburg. Of course we just couldn’t help but take a tour of the magnificent Peterhof. Our visit was with an excursion program . Within.

All perfectly, and the architecture and fountains and the beach, and tame squirrels. Here you walk and just happy in the soul. But here comes a large lady in a Russian Guard uniform and loudly yells “I” to the entire park.

Uninteresting and tedious run through the corridors in the halls.

No impression of the main idea of the visit, the compass of 20 people in a group, very crowded in small rooms (improvised corridors behind the rope), interesting in excursions little, more about the difficulties of recovery

The organizers of the tour program did not think at all about the convenience of visitors to visit the museum space: did not give the opportunity to see and understand the beauty of the historic interiors, and the tour was aimed at the difficulties of reconstruction, especially in the new buildings could.