The Giant’s Causeway is one of the most bizarre and wonderful places on the planet. It is located near the town of Bushmills on the northeast coast of Ireland. This section of the sea consists of several thousand basalt columns, which have a regular hexagonal shape, reach a height of 12 meters and 50 cm across. They are positioned vertically and driven into the ground so tightly that not even a thin knife blade can pass between them. When you look at this stretch of coast from above, it looks as if it is completely cobblestone. The three-dimensional plan of the structure is an image of a huge ramp with descending cascades of faceted steps to the sea.

Save yourself a trip!

The road of giants stretches along the coast for 275 m, in addition, 150 m into the sea. Geologists estimate the age of the columns to be 60 million years! Despite this, they are in perfect condition, almost undestroyed and still please tourists who come here with their magnificence.

Here you can see the picturesque caves, some can be viewed from the land, others – only from the sea, visit ruined castles and charming sandy coves. Dunluce Castle, dating back to the 13th century, stands on a cliff connected to the mainland by a bridge over a chasm with the sea splashing at its bottom. Dunseverick Castle is an earlier fortification east of the Giant’s Causeway, and to the east is 16th-century Kinbane Castle. In summer you can get here every day by cruise boat to Rathlin Island, five miles from Billy Castle. The most interesting thing here is Bruce’s Cave, where in 1306 Robert the Bruce, King of Scotland, watching a spider reweave its web, had the idea to reclaim his kingdom and become lord again.

The legend of the origin of the stone prisms

According to ancient Celtic legend, the stone prisms on the shores of the Irish coast were built by the fairy tale hero, the giant Finn Mac Cummel. One day he wanted to wrestle with One-Eyed Goal, who lived on the Staffa Island on the other side of the Channel. Unfortunately for him, Finn Mc Cummall was very afraid of water, and he had no suitable means by which to cross the expanse of water. So he decided to build a road across the sea straight to Staffa Island. It took him seven days to build it, dragging the faceted pillars, digging them deep into the earth and pressing them together so that they did not sag under his body weight.

When the giant was finished building, he was very tired and decided to rest before the difficult battle. At that time Cyclops noticed a stone bridge in the middle of the sea. He sensed the danger and decided to attack his enemy first. He crossed the bridge, searched for an abode, and began pounding on the doors. Finn Mc Cummall would have been unhappy had it not been for his wife’s resourcefulness. She wrapped her husband in a sheet and only then launched Cyclops into the house. To the angry cries of the woman calmly replied that the owner is not home, and in the cradle sleeps their son. Gol was frightened out of his wits when he saw the size of the child and the height of his father. He fled from the island in terror, destroying the bridge he had built behind him so that the enemy would not catch up with him.

Some researchers believe that the Irish columns are the creation of ancient people. After all, such a structure is not the only one of its kind. It can be compared with the “Wall of Hadrian” – a magnificent Roman monument, built in the II century AD in Britain. It was 130 km long, 5 km high and 6 km wide. Similar to both of these structures is the famous Stonehenge in England, which was made of huge blocks of stone 5,000 years ago.

At the bottom of the Pacific Ocean, scientists discovered an entire vanished city, built mainly from hexagonal slabs, which strongly resembled the pillars of the Irish.

From all of the above it follows that technically people of antiquity were able to build impressive-sized stone structures.

Scientists explain the Irish miracle very simply. Millions of years ago, magma, formed after the volcanic eruptions, began to solidify. When similar processes take place at the seashore, the top layer of magma breaks up into geometrically regular hexagons. Then the process of crystallization deepens inside and generates faceted basalt columns. This is the usual explanation for one of the most seemingly mysterious structures of our century.

Some time ago the Giant’s Causeway was voted Britain’s fourth wonder of the world (according to the Times). These ancient formations are protected by UNESCO and belong to the National Trust.

The Giant’s Causeway in Northern Ireland 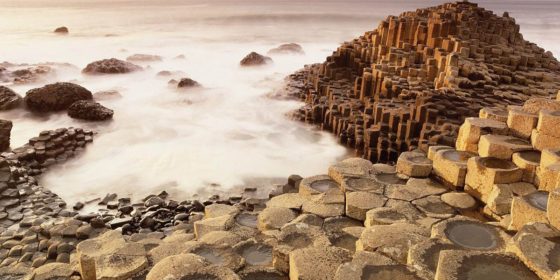 The almost 40,000 enormous stone pillars are so closely spaced that they look as if they were erected by a giant, a hero of Irish myth and legend. The columns are between 30 and 50 centimeters in diameter, have even tops and several corners (a quarter has five corners and the rest have four, seven or even nine corners). The Giant’s Path (or the Way of the Giants) is located in Northern Ireland, not far from the small town of Bushmills. It wraps around the cliffs of the Causeway Coast and then gradually descends under the water toward Scotland.

What is the Trail

The scale of this amazing place is astounding. If you look at the Giant’s Causeway from above, it really is extremely similar to a stone-lined road that stretches along the coast 275 meters and goes into the Atlantic for another hundred and fifty meters.

The average height of the pillars is about six meters, although it is not uncommon to see pillars twelve meters high. When viewed from above, they are somewhat reminiscent of a honeycomb, because they form hexagons that are so tightly spaced that it is difficult to slip even a thin knife between them.

Absolutely all of the columns are dark in color and incredibly hard – scientists explain this natural phenomenon by the fact that they consist mainly of magnesium and iron-rich basalt, which in addition has a small amount of quartz. Because of this composition, the columns are able to successfully withstand the ravages of winds and rough waves of the Atlantic Ocean.

The columns of the Giant’s Road in Ireland form three groups of sites:

The pillars themselves on the coast of Causeway Coast are located around the cliffs, which later people gave quite original names. For example, two of them were named after Harp (the columns from the cliff curved down to the coast) and the Organ (straight and tall pillars, which are located near it, is very reminiscent of the musical instrument). 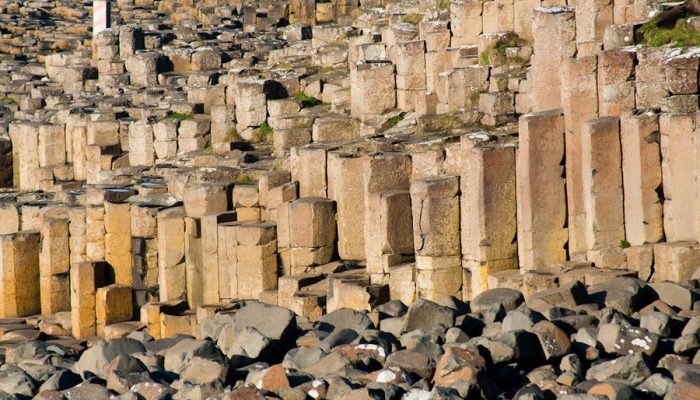 There are cliffs with such interesting names as Giant’s Weaving Machine, Giant’s Coffin, Giant’s Cannon, Giant’s Eyes. Here you can also look at the Giant’s Shoe, a two-meter cobblestone that resembles this shoe (it was even calculated that a giant who wore such a product must be at least 16 meters tall).

Stovepipes of the Giant’s Trail

There’s another interesting place on the Giant’s Causeway, the Stovepipes, which several centuries ago frightened the already defeated Armada of the Undefeated.

It happened for a trivial reason. Some of the pillars of the Giant’s Road in Ireland are not just towering on the coast, but from the sea they resemble the chimneys of a huge castle. The Spaniards mistook it for one, and fired their cannons into “enemy territory” – that is, completely deserted territory.

READ
Traveling through China: the city of Macau.

The story ended bitterly for the Spaniards: their shipwrecked on the rocks, and many people died. The found treasure from the ship, now held by the Ulster Museum in Belfast, can be seen today after it was recovered from the bottom of the sea.

It is no surprise that the Giant’s Causeway has its legends and myths to explain its appearance and formation.

The ancient Irish believed that the Giant’s Causeway was built by the Irish giant Finn MacCool to get to his nemesis, the Scotsman who lived in the Hebrides, and to fight him to decide which of them was stronger. 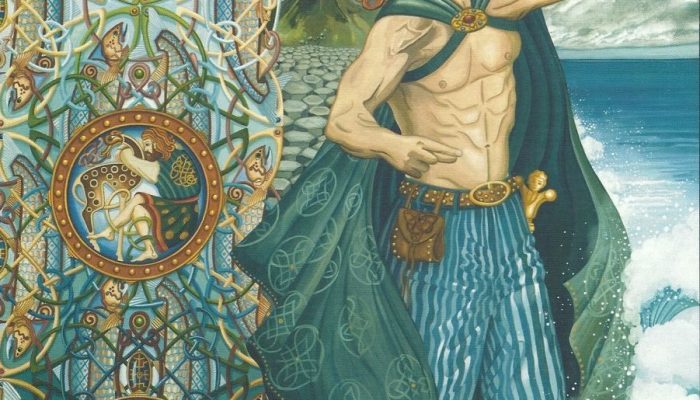 Further versions differ slightly from each other. According to one of them, when he saw that his opponent was bigger and more powerful than him – Finn ran away. And when he saw the Scotsman chasing him, he got his wife to swaddle him like a baby and leave him sleeping on the beach. According to another version, while the Irishman was building the road, he was so tired that he fell asleep on the shore, and his wife, seeing his rival approaching, swaddled him up and passed him off as a child.

Anyway, when he saw the huge “baby,” the Scottish giant decided it was better not to mess with his father and ran away, and to keep the Irishman from catching up with him, he destroyed the trail.

Interestingly, the Way of the Giants became widely known only in the late 17th century, when the Bishop of Derry began to heavily advertise this amazing place. And in the early 19th century tourists began to appear here en masse.

Despite the fact that this area has been declared a national nature reserve by the Department of the Environment of Northern Ireland, there are absolutely no closed areas, and tourists can walk everywhere they want and wherever they can reach. This fact is quite a favourite of tourists in this country.

The Giant’s Road is unique in that, although something similar exists in other parts of the world, it is here that the largest cluster of such pillars is located. It is not surprising that for centuries scholars have debated exactly how the Trail came to be.

Some have asserted that the giant pillars are actually huge crystals that originated at the bottom of an ancient sea long ago. Others said that the pillars were actually petrified bamboo forests.

Nowadays, most scientists agree that there was once the largest lava plain in Europe. It was formed by a huge layer of limestone, which is located under the territory of Northern Ireland. In ancient times, molten lava poured through its fractures during volcanic eruptions, covered the land with a layer of 180 meters, and then began to cool and solidify. And it did not become a shapeless mass because it was based on basalt.

After a while, during cooling, the lava slowly began to decrease in volume, and thanks to the basalt, hexagonal cracks formed on its surface. As the inner layers of magma began to cool, these cracks began to deepen and formed hexagonal columns.

This theory was confirmed by a group of scientists from Toronto, who, after conducting experiments, were able to prove that the slower the cooling of magma, the larger the columns are. Thus, the secret of the appearance of such an amazing natural phenomenon as the Giant’s Path in Ireland has been solved… Or has it?