If you want to explore Africa at a relaxed pace, The Gambia is well worth a visit. It is less commercial than Kenya, but also extremely cheap and full of friendly people. The inhabitants will do a lot to make your stay in their country comfortable.

The width of the territory covered by The Gambia is 50 kilometers . Its borders deepen into the territory of Senegal, forming a narrow strip reflecting the outline of the river of the same name.The Gambia stretches for 4,000 kilometers. 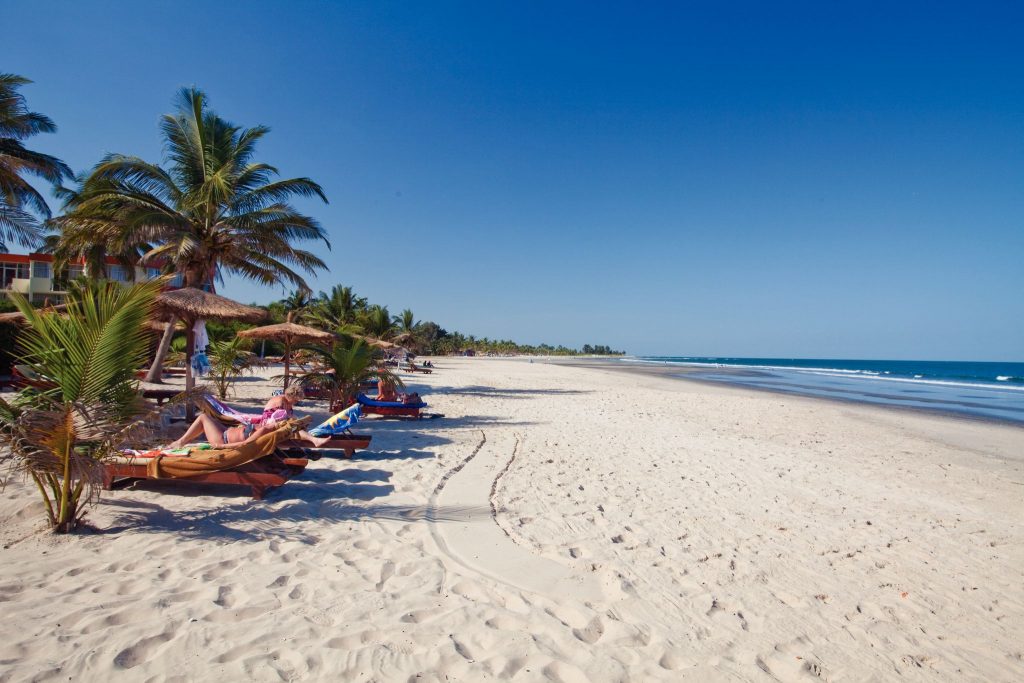 50% of The Gambia’s export crop is peanuts . The ethnic tribe population, which is the largest in The Gambia, is 37.2%. The locals are engaged in working the land, mostly peanuts, and fishing. Most of them live in the western part of the country. In addition to The Gambia, they can also be found in Senegal, Liberia, Burkina Faso, and Ghana. Muslims make up 95 percent of the population of The Gambia .

In an area 350 kilometers long are the Circles of Senegal, mysterious sites located in a circle. The archaeological excavations consist of 1000 stone elements, called monuments by the researchers. Despite the many works being carried out there, it is not yet known which culture erected these enigmatic objects. However, it is known that the stone elements were laid in the 8th century AD. In 2006, the Senegambian circles were inscribed on the UNESCO World Heritage List. Each of the circles within Senegambia’s archaeological sites weighs 10 tons. It is the oldest surviving megalithic structure in sub-Saharan Africa. There are 25 stones 2.5 meters high seen on the land of The Gambia.

The Gambia and its surroundings are home to over 400 species of birds, making the area particularly beautiful. The length of the runway of the airport in the capital of The Gambia, Banjul is 3600 meters. This place may be known to fans of space technology – U.S. spacecrafts had an emergency landing site here. 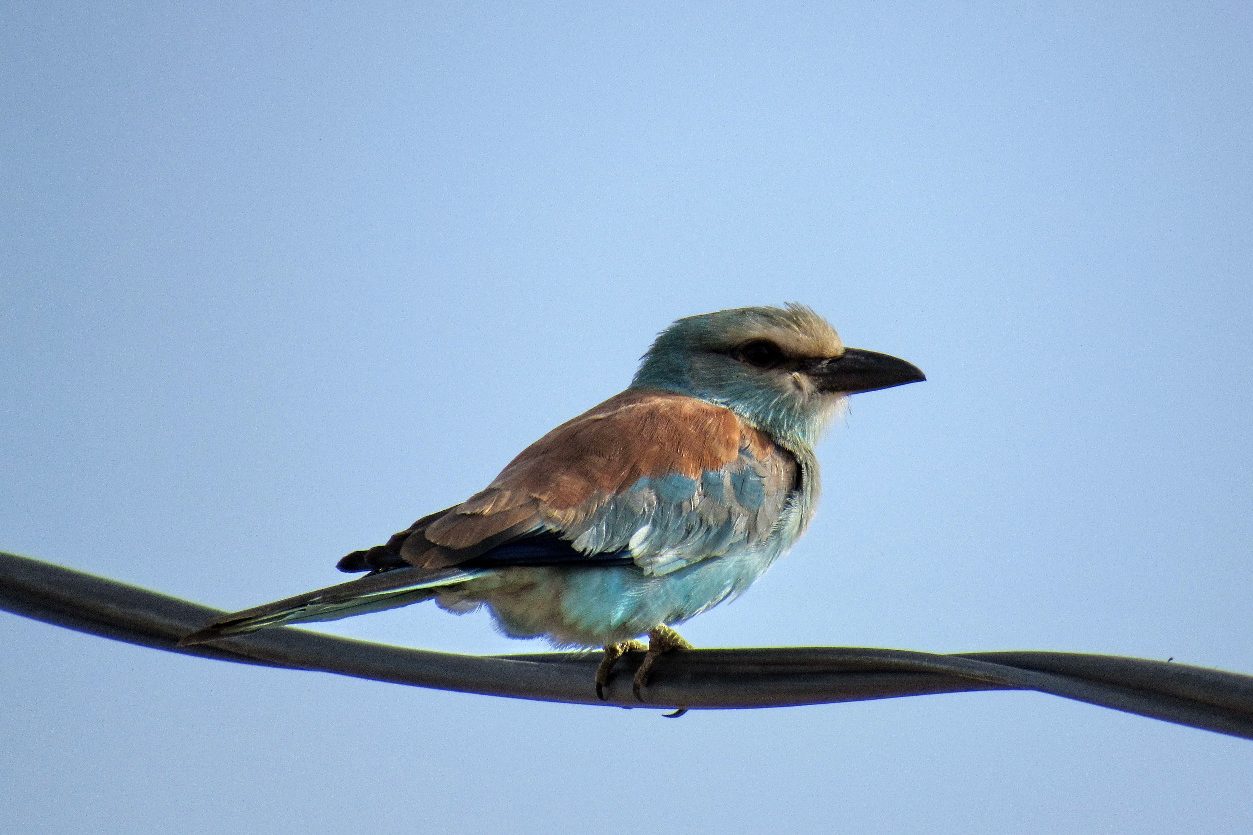 In The Gambia you can find high temperatures from November to May in the central part of the country, including Jandanbur (formerly Georgetown), equal to 40 degrees Celsius. It was not until 1965 that The Gambia became a separate independent country.

The coastline of The Gambia is 80 km . This African land has no shortage of beautiful sandy beaches. The sand here is fine and white. I especially recommend a visit to the “smiling shore” – there you can have a great vacation, as well as take unique photos.

In The Gambia for 1 euro you can drink great coffee, beer at a local bar or buy grilled fish right from the counter on the shore.

The Gambia has an extremely low official crime rate. Indeed, the country has an incredibly low crime rate. Market thefts are insignificant – rather, you may encounter beach seducers tricksters, Gambian counterparts of the famous tulip. The Gambia is the choice for people who want to visit Africa, but are still hesitant for safety reasons 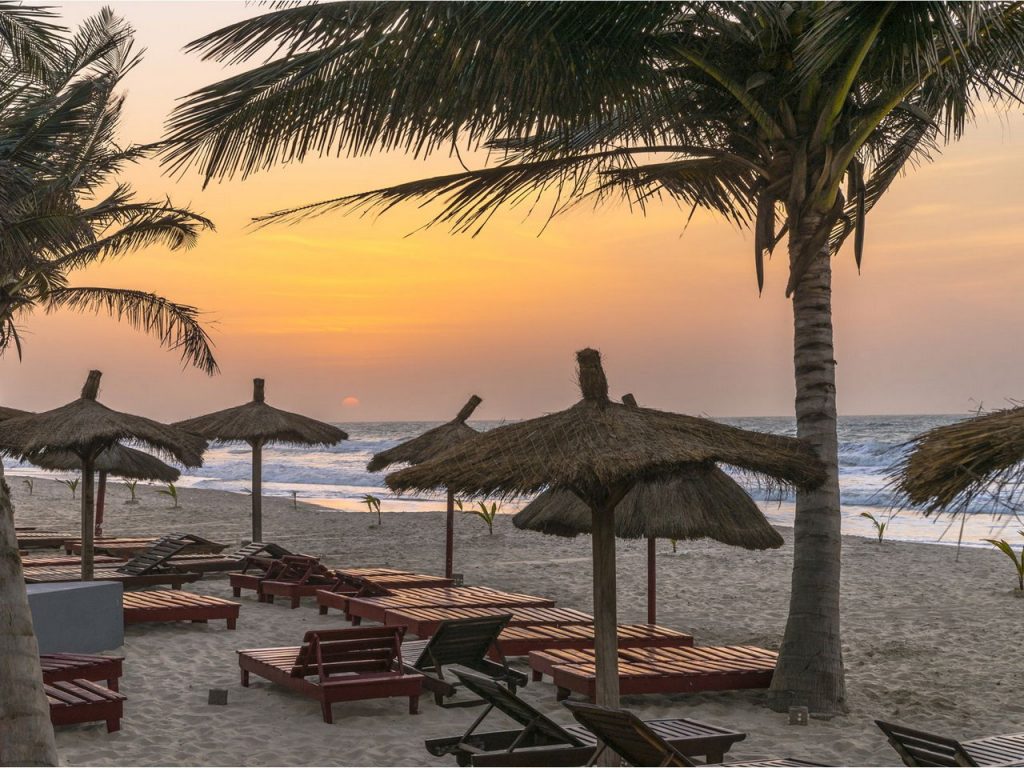 The Weather in The Gambia

The weather in The Gambia is almost always sunny and with high temperatures. Because of this, you can come here at almost any time of the year. This small country is located in a river valley named after the state. The climate is dry equatorial, with abundant rainfall during the dry season. The humidity is conducive to the dynamic growth of the native vegetation, hence the evergreen and lush gallery forests. Native animals also inhabit the mangroves and mangroves that grow along the riverbed.

The climate of The Gambia is divided into dry and rainy seasons, the first of which is recommended by many as the most convenient to visit. Between November and May, daytime temperatures can reach 40 degrees Celsius, and at night can be much cooler. The coast is characterized by slightly milder temperatures, this is due to the wind blowing from the Atlantic Ocean. In general, all the biodiversity of The Gambia is centered around the life-giving waters running through the center of the country. The river is 30 kilometers wide. 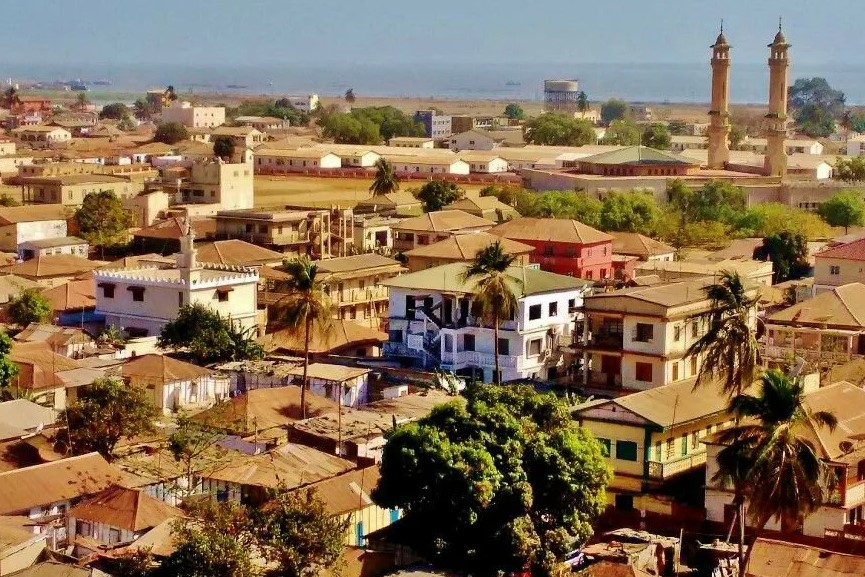 The Weather in The Gambia

Fauna and Flora of The Gambia

Characteristic elements of the landscape are the huge majestic baobabs and acacia trees that feed the giraffes. Palms can also be found here. Gambia’s favorable climate and evergreen vegetation influences the diversity of wildlife.

This small country is home to over 400 species of birds. The beautiful, fabulously colorful Abyssinian slides, as well as dignified cormorants, kingfishers, cranes and white herons live here in the wild. The river attracts them because it is a source of food. Crocodiles and hippos inhabit the waters of the river . Among land mammals, monkeys and antelopes are the most numerous. The country also has strictly protected areas, including the Abouko Reserve and Gambia National Park. 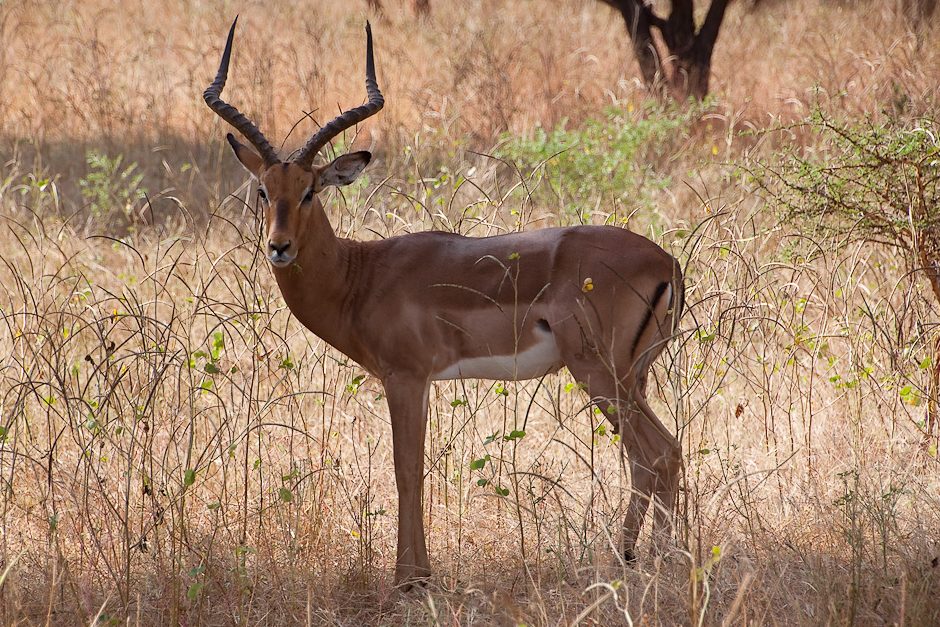 Fauna and Flora of The Gambia

The Beaches of The Gambia

The Beaches of The Gambia

For those who prefer a more comfortable environment, Senegambia might be the right choice. If you don’t want to experiment with new food and are only confident about something familiar, it is easy to find European cuisine in Senegambia. This is also the best place to look for souvenirs. A large number of stores dictate competitive prices . Those who want to get in touch with the wildlife is invited to the Bilio Forest Park, also known as the Monkey Park. The cost of entry to the park is low and is only 275 rubles. You should look around carefully – monkeys here are so domesticated by tourists, they are just waiting to be thrown a tidbit. However, it is forbidden to feed the animals here (except for peanuts, bought on the spot). 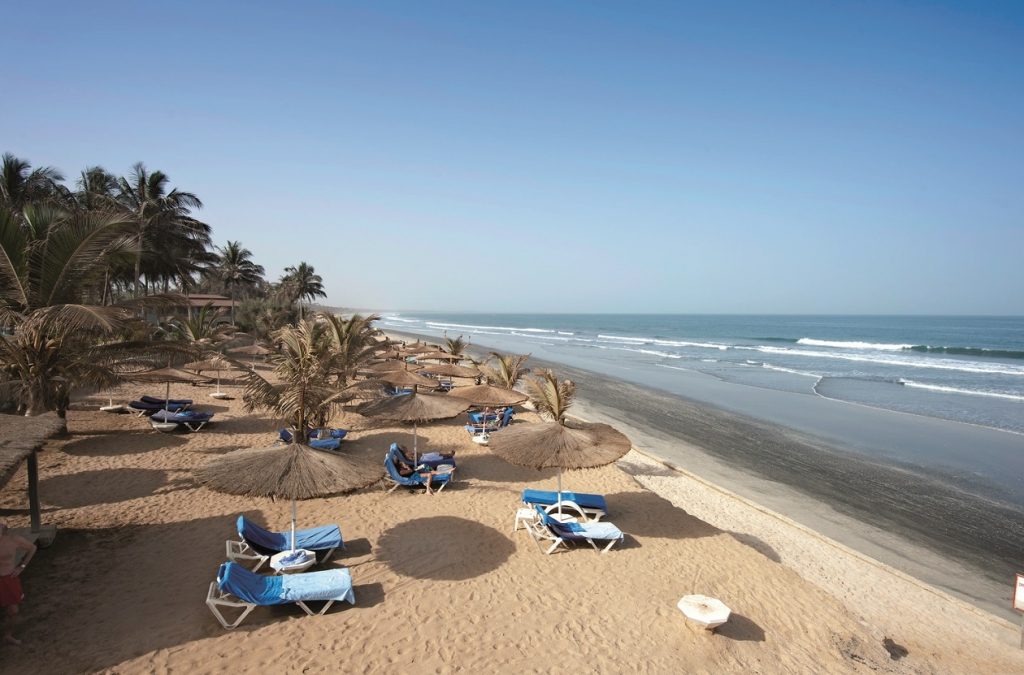 Kachikals in Bakau – habitat for crocodiles

If you are not afraid of crocodiles, Bakau is a great place to see them up close. For only 180 rubles you can take a picture with the wild inhabitants of the nearby swamps. These interesting reptiles live and breed in near-natural conditions, though under human supervision. There are more than 150 of them. What is interesting, tourists here can touch a crocodile without fear . But for some people it is too scary. One look will be enough. Rare specimens of trees, including silk trees with thorns, also look interesting. 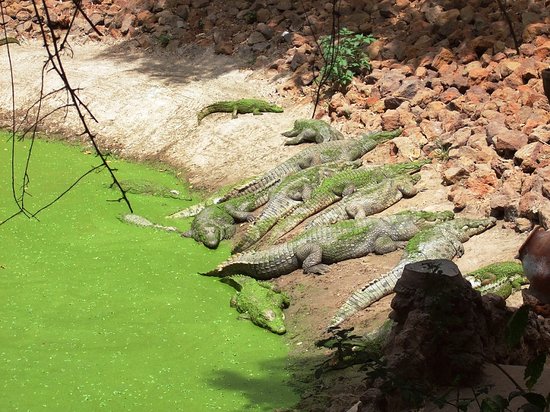 Kachikals in Bakau – habitat for crocodiles

The smallest country in Africa has a fantastic cuisine in which you can feel the influence of colonialism. The dishes are of course based on local ingredients such as rice, fish, couscous or cassava and served with vegetables like beans, cabbage or onions. Grated peanuts are ubiquitous here . Tourists can also try many new drinks. For example, baobab juice. It is a great thirst-quencher for heat and spices, especially Gambian chili peppers. Peanut butter and chocolate are eaten as delicacies here. Locals often make couscous or rice with fruit for breakfast. A popular snack here are bananas and, as mentioned, peanuts. 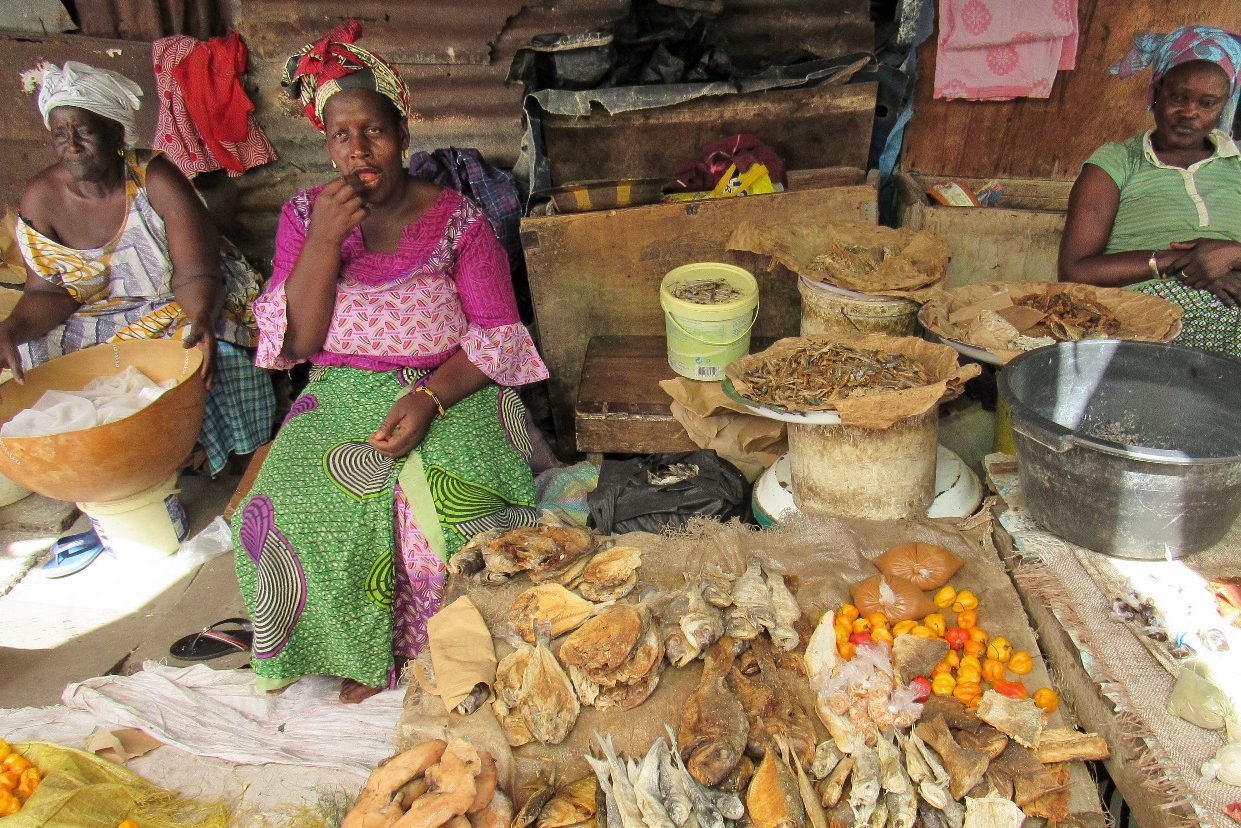