Varenna and its attractions

Perhaps only a lazy “inhabitant” of Lake Como has not commented on the “disadvantages” of its eastern shores. The reason is that the east side of the lake receives almost no sunlight, and therefore the settlements there often have a bleak and boring atmosphere. But Varenna and Bellagio escape this unenviable fate. These towns stand on the sides of the entrance to a branch of the lake called Lecco, and it is these that receive both the sun’s gentle rays and the warmth and cheerfulness they provide.

Perhaps only a lazy “inhabitant” of Lake Como has not commented on the “disadvantages” of its eastern shores. The reason is that the east side of the lake receives almost no sunlight, and therefore the settlements there often have a bleak and boring atmosphere. But Varenna and Bellagio escape this unenviable fate. These towns stand on the sides of the entrance to a branch of the lake called Lecco, and it is these that receive both the sun’s gentle rays and the warmth and cheerfulness they provide.

Varenna is a small holiday village in the Lombardy region, 20 km northwest of Lecco and 60 km north of Milan. It covers an area of 11km² and the population census of 2008 recorded 859 local residents. Varenna’s position is somewhat reminiscent of Venice: houses stand by the water itself, and boats dock on the very porch. It is said that the locals owe their cheerful disposition to the fire that took place on the island of Komacin in 1169: they escaped death and ruin, and now they do not care about any hardship. It is resilience and strength of character that has helped the local people to produce marble for centuries.

The sights of Varenna 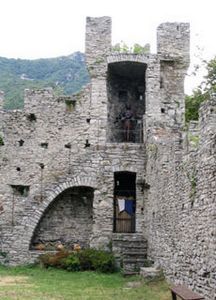 One of the main attractions of the resort village is Castello di Vecio – a castle built in the 11th century and later remodeled several times. Today all that is left of its former splendor is the observation tower and the wall. Years of World War I was marked by the equipment in the building underground cells, which are allowed to tourists since 1999. A suspension bridge leads to the main castle tower, from which you can admire Lake Como. The path along the north side of the castle, strewn with gravel, is dotted with flowers of indescribable beauty in the spring. Leaning on the railing, one can see the Varenna spreading out below, and climbing the steps, one can reach the grove of olive trees nearby. Today Castello di Vecio is home to a falconry that breeds and trains long-eared owls, falcons, parrots, barnacles and buzzards. And employees of the falconry sometimes put on the most real costume shows for tourists, so it is worth going up to the castle.

In the middle of the central square of St. George in Varenna is the Church of San Giorgio Romanesque period, a UNESCO World Heritage Site. This worthy example of Italian architecture demonstrates the transition from Romanesque to Gothic style. Its not particularly attractive façade hides magnificent frescoes. 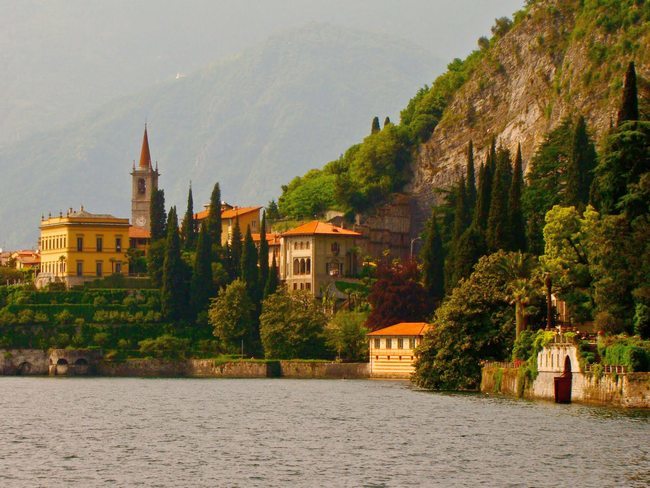 The motorcycle museum in the vicinity of the town is also worthy of attention. And, of course, the villas! As well as the other cities of Lake Como, Varenna can also boast several worthy examples. Almost all guidebooks for tourists recommend to see the villas Monastero and Cipressi. The first one is located on the mountain near the former Cistercian monastery dedicated to Mary Magdalene. Hence the name of the building. Villa Monastero was built by monks in 1208. These “brave religious men” fled from the island of Comacina to the “mainland”, fleeing from the destructive war between Milan and Como. The monastery was abolished in 1567 and in 1569 its building and surrounding lands were sold to a member of the wealthy Paolo Mornico family. About a century later, Lelio Mornico transformed the monastery into a splendid asylum. Members of the Mornico family owned the monastery until 1862, and had time to make several alterations to it. The only surviving detail of the monastery is a small Pietà fresco. During their ownership, the Mornico family completely rebuilt the façade of the building and arranged two large state rooms, the Black Room and the Red Room, on the first floor. Over the following years, the Villa Monastero passed from one owner to the next, each one making changes to its appearance, adding an eclectic touch. This continued until Marco de Marchi handed over the property he had acquired to the Hydrobiological Institute. In 1963 the Villa Monastero became an international research and cultural center. Around the building there is now a splendid garden where you can stroll in the shade of cypresses, agaves, pines and citrus trees, admiring the bas-reliefs and statues. Inside the villa, the bathroom, called “King Farouk” and the grand staircase, decorated with several types of marble, are worth a visit.

READ
The Best Sights of The Gambia

Not far from Varennes is the Villa Cipressi, built in 1400 in the antique style. In the course of the following centuries it was rebuilt several times, but even today it is a worthy example of Italian architecture that preserves the atmosphere of refinement inherent in the houses of aristocrats of the XVIII and XIX centuries. The City Hall bought Villa Cipressi in 1980 and after the restoration it became a small hotel. The building is surrounded by a wonderful park with century-old trees. And since the villa is a municipal property, it is often used for marriage ceremonies.

If we talk about natural attractions, then Varenna is not deprived of it. The shortest river in the country with a length of 250 meters flows in the quarter Fiumelatte. Its name “Fiumelatte” (“milk river”) is due to the unusual color of the water. 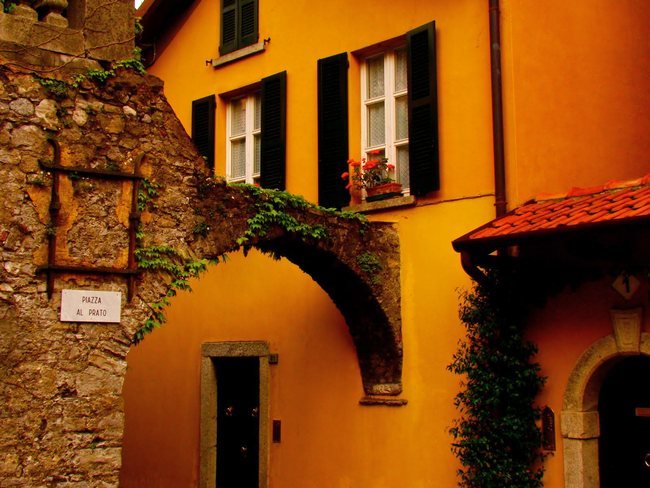 Varenna is also the narrow, winding streets paved with steps of lake stones, walls of houses looming on all sides, stone arches between buildings, breathtaking views of Como, silence, privacy, and measured life. There are not a huge number of bars and discos, and it seems that the town does not live for tourists.