We had a great trip to the Eden Project (Cornwall, UK) – aliens again! Only now in their ships – Earthly surprises)

Continuing the story of the sights of the warmest county of England – Cornwall. In past reviews, you can get acquainted with the synoplanets on the Liverpool coast and the open-air theater on the ocean – Minak Theater. The Eden Botanical Garden (“Garden of Eden”) or Eden Project was completed in 2001 and is located at the bottom of a former quarry, in Cornwall County (just a 30-minute drive from our Shortwoods Cottage, where we stayed). The author of the idea is Tim Smith, the architect is Nicholas Grimshaw, and the developer is Davis Langdon.

Look at the shape of the buildings – isn’t it fascinating in its resemblance to alien spaceships from sci-fi movies!

Several greenhouses made of geodesic domes cover an area of 22,000 square meters, where biomes for plants from equatorial and Mediterranean forests have been created. 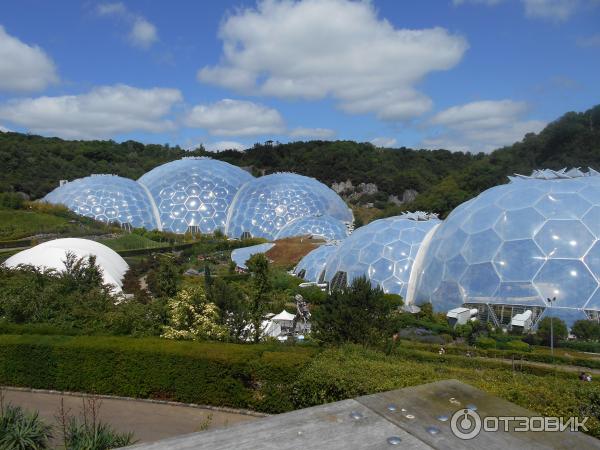 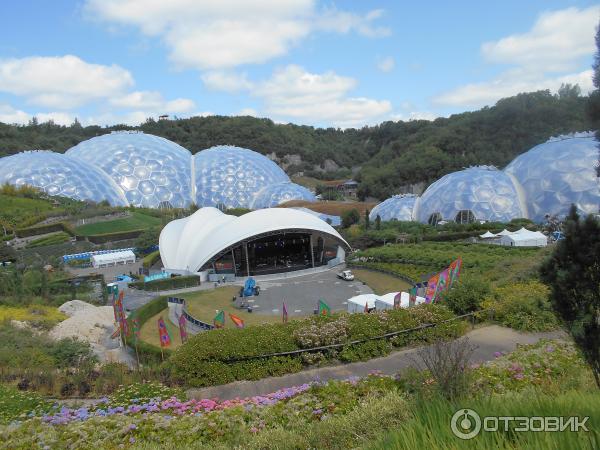 The domes of the greenhouses are created from polygonal profiles, made of durable light-permeable plastic.

The uniqueness of the complex is that under the domes created a growing environment for many tropical – a giant bamboo, coffee, bananas, rubber trees, etc., and the Mediterranean – a variety of flowers, olive trees, vines, etc. Many of the fruits grown here, by the way, can be tasted.

For all of them was brought a certain soil, the maximum temperature and the necessary humidity is maintained. 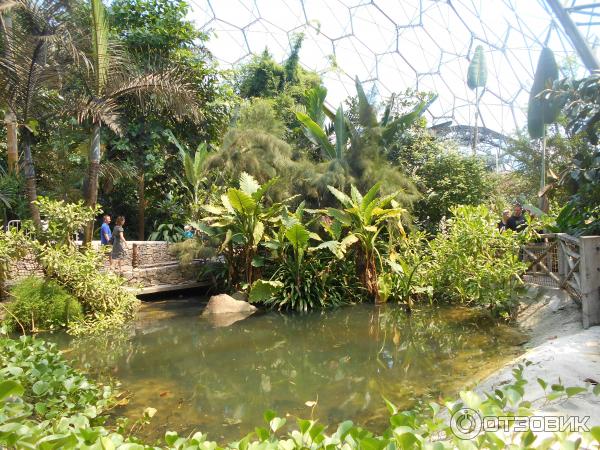 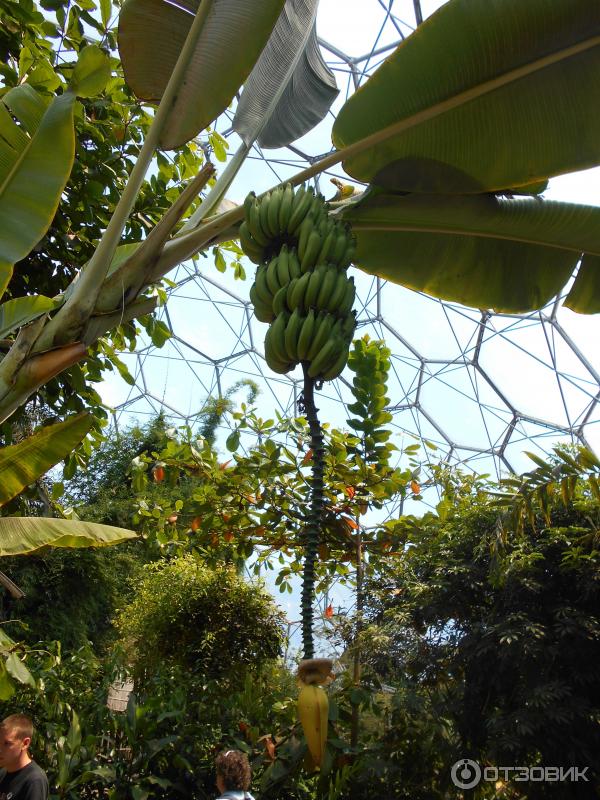 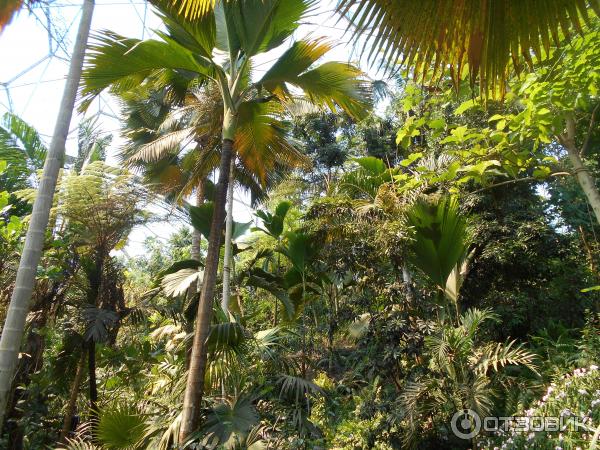 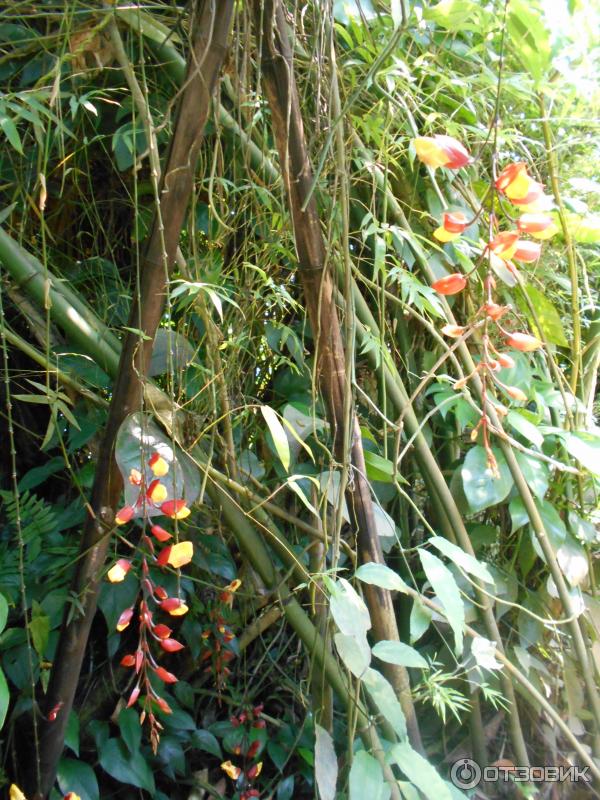 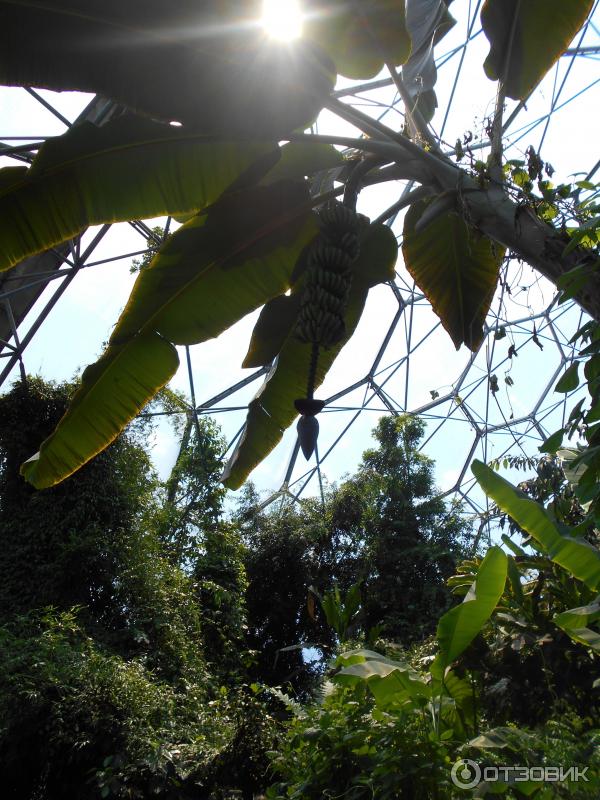 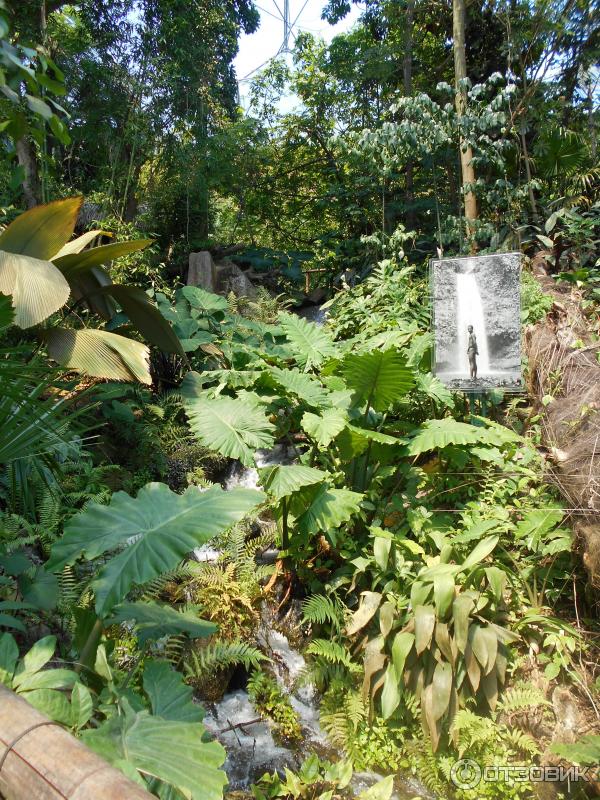 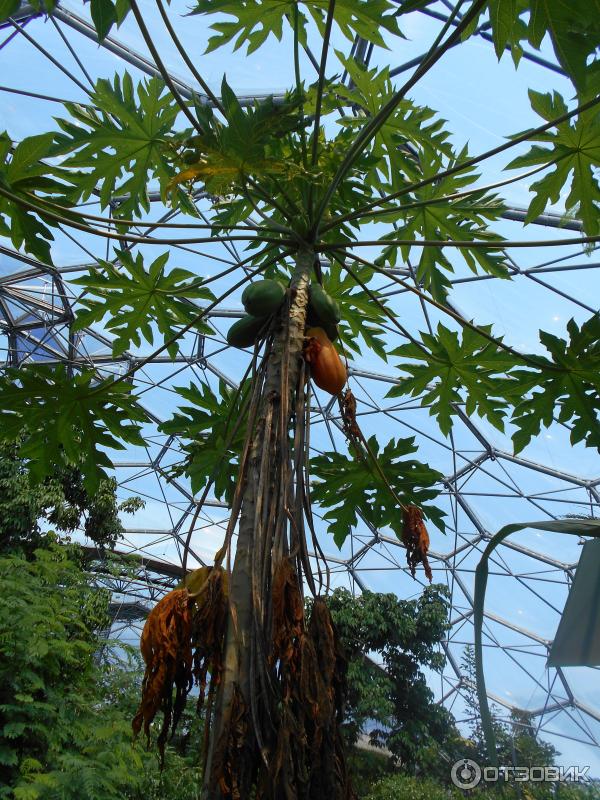 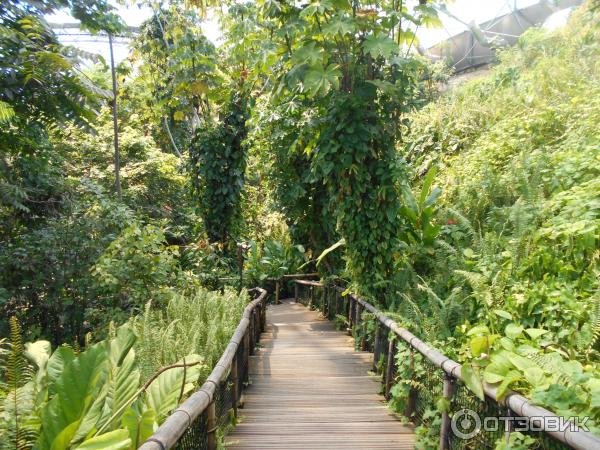 Here you can see not only a typical equatorial landscape – even with waterfalls (!), but also domestic constructions of local residents – it is one of the features of the Project. 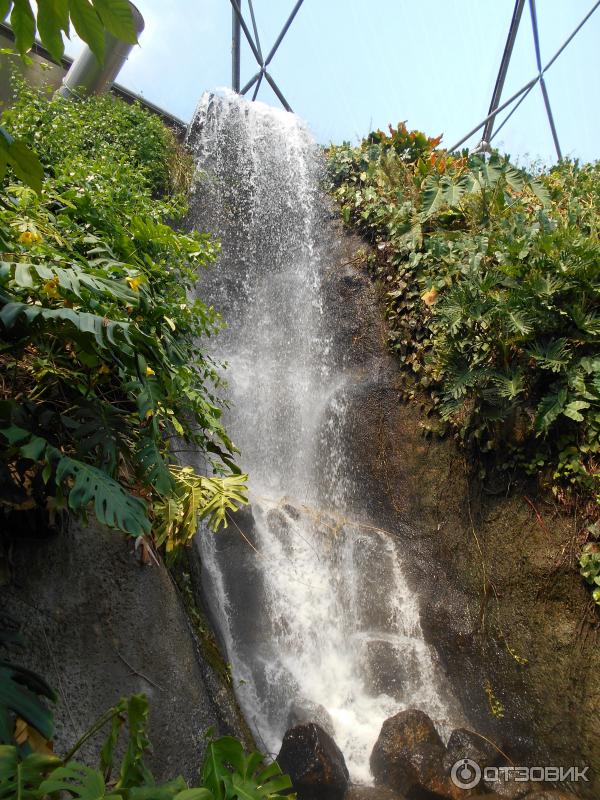 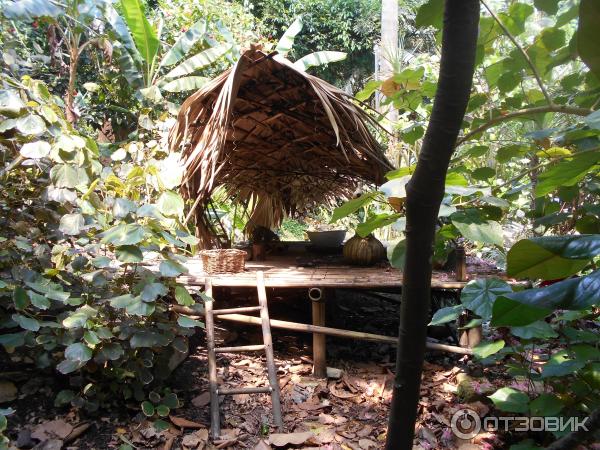 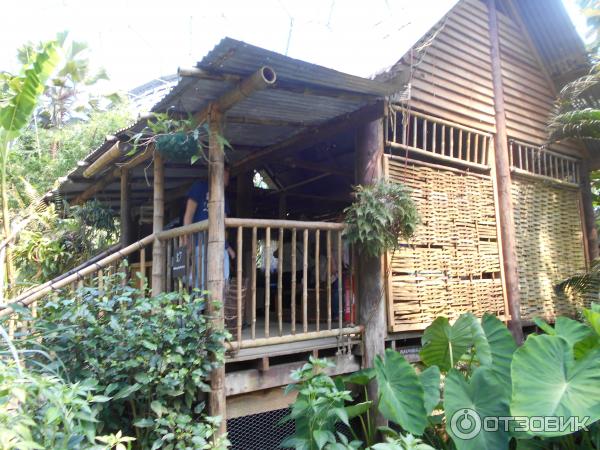 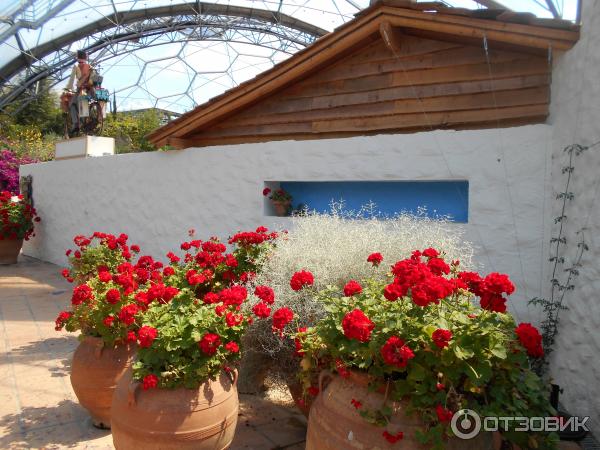 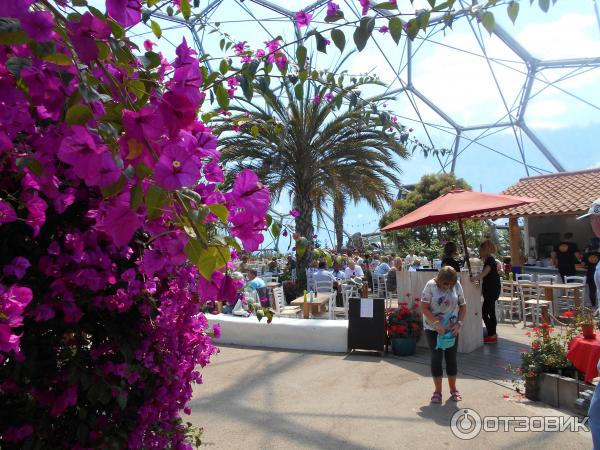 You can admire strange plants from the height of a palm tree by walking under the dome to a special viewing platform. 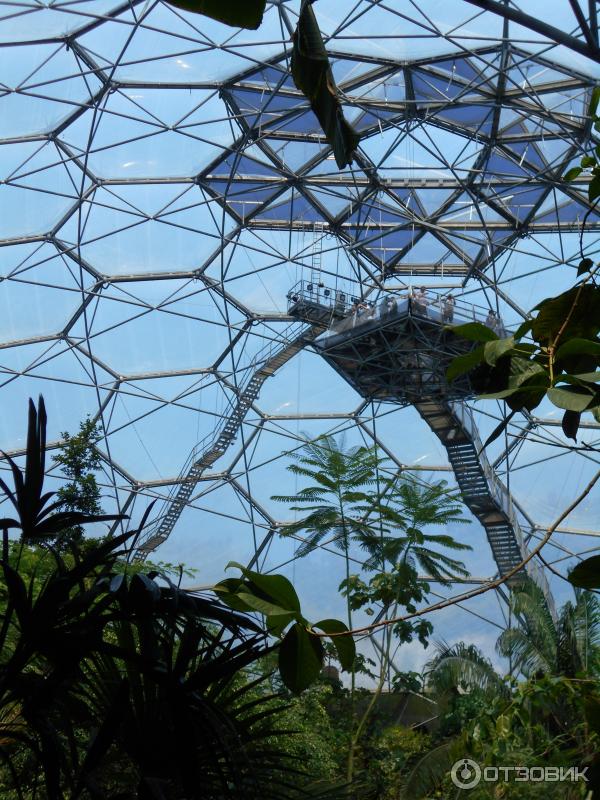 The third biome of the Garden of Eden consists of plants of temperate zone in the open air – lavender, hops, tea, sunflowers, various flowers and many others. 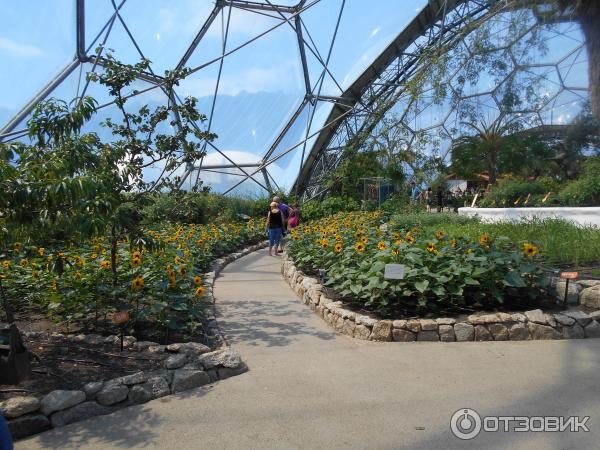 How is the Eden Project different from the usual Botanical Garden?

Firstly, the Project performs educational tasks in terms of environmental education for children and adults, focusing on the relationship between the natural world and humanity. The plants have inscriptions about their medicinal uses. 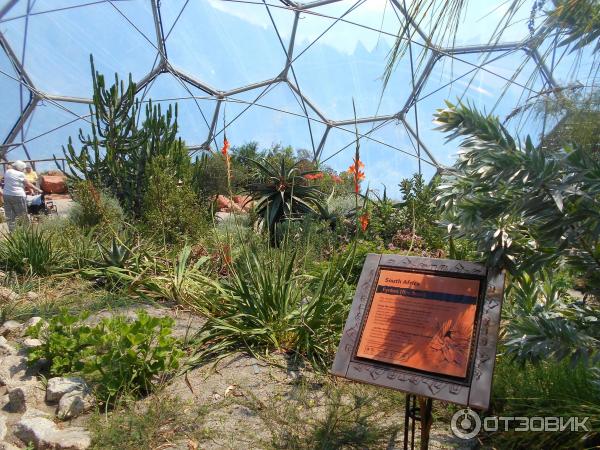 Rainwater is used to maintain humidity in the greenhouses and for sanitary purposes. Electricity to the complex is supplied from wind turbines.

Secondly, the complex includes not only greenhouses with plants that are strange to us. Visiting this place is a real adventure for children and adults. Very well-developed infrastructure of the place – free shuttle buses run from several parking lots named after the fruit (Mango, Banana, Orange, etc.). There is a wheeled steam train that runs through the area. 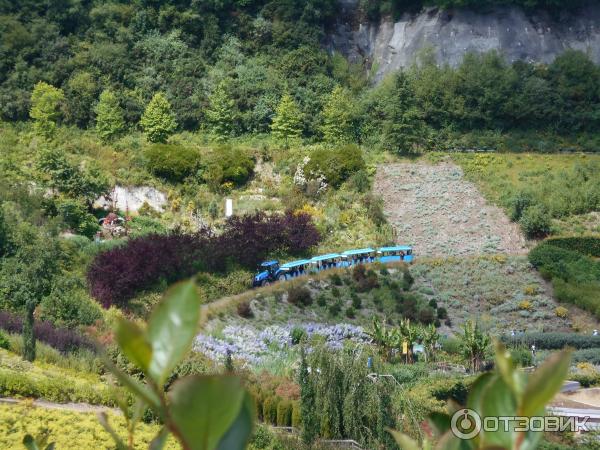 The project includes a huge area with cafes and stores – in a building separate from the greenhouses, of course. And visitors are greeted by such horses made of tree branches. 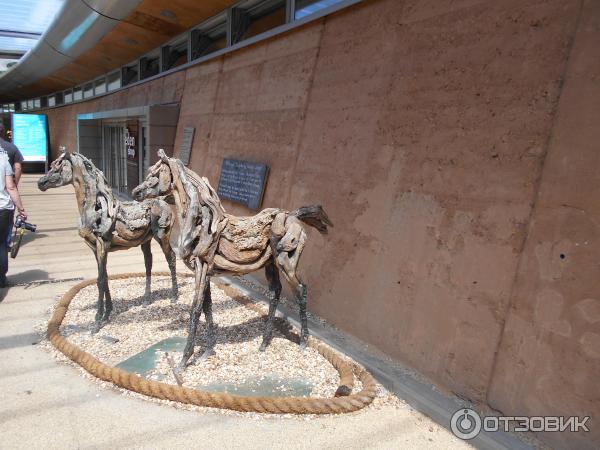 There are many other objects in the complex made of natural materials as well as those assembled from metal waste: a metal lumberjack or a robot and a bee composed of recycled electrical appliances. In the greenhouses you can see huge flowers made of metal structures, as if presented there for comparison with natural plants. And they look quite harmonious there, it seems to me. In this world, everything is one. 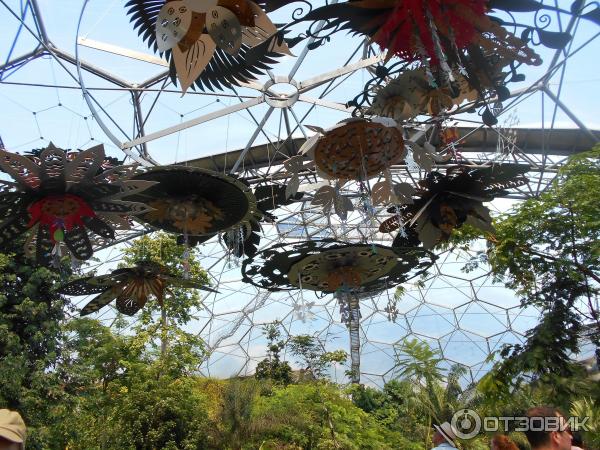 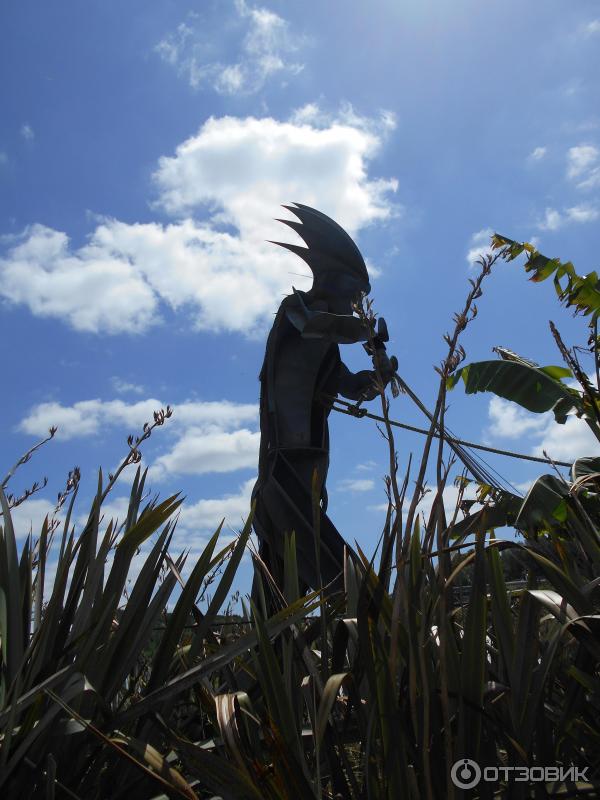 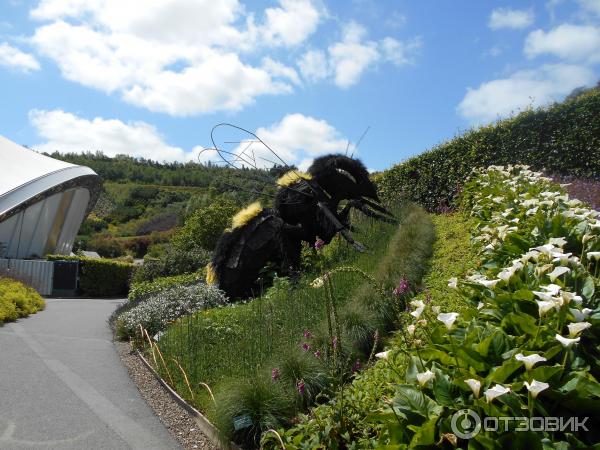 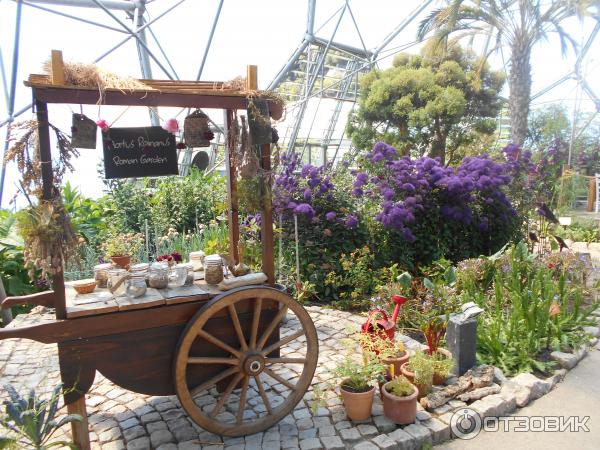 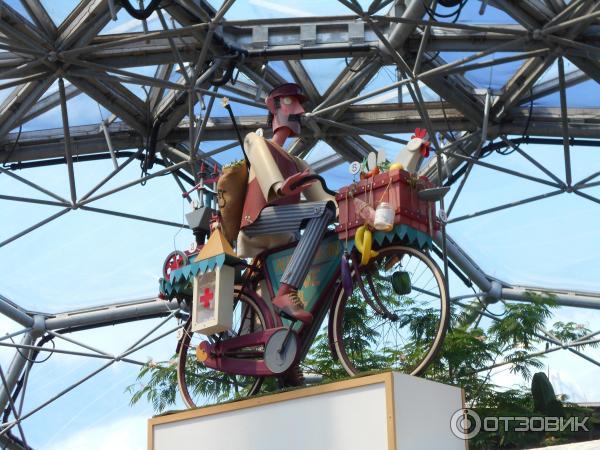 The greenhouses and pavilions are decorated with different sculptural groups, each of which carries a certain meaning. Such as this “demonic” drunken company in the grape growing area. 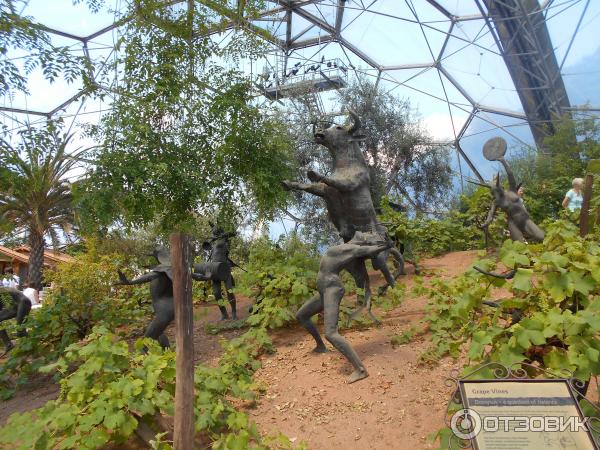 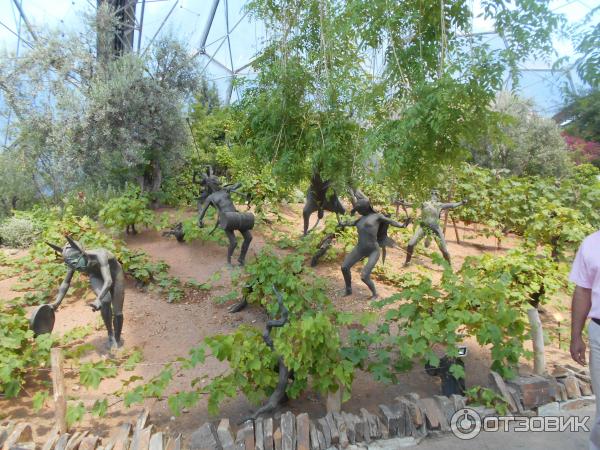 The Eden Garden has been operating an ice pavilion in the winter months since 2005.

In addition, coruollary musicians perform regularly in the biomes. Eden has a special covered stage (photo below) where you can listen to live concerts. For example, there are regular Eden Sessions with such musicians as Emmy Winehouse, James Morrison, KT Tunstall, Brian Wilson, Lily Allen, Kaiser Chiefs, The Verve, Oasis, and others. 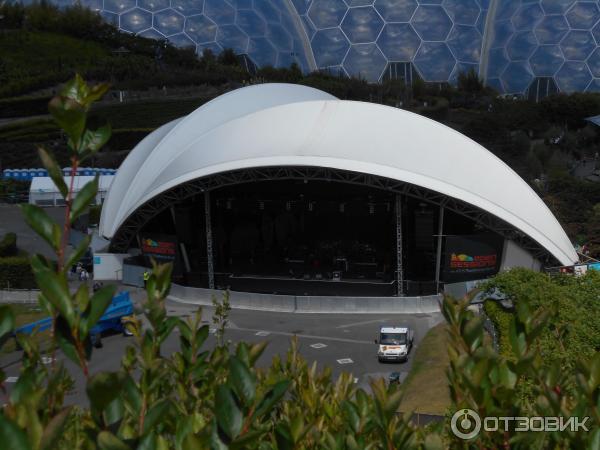 You can’t leave without Eden Project brand souvenirs from the big store, a selection to suit all tastes. I bought a couple of creams, an olive wood spoon and a majolica keychain. 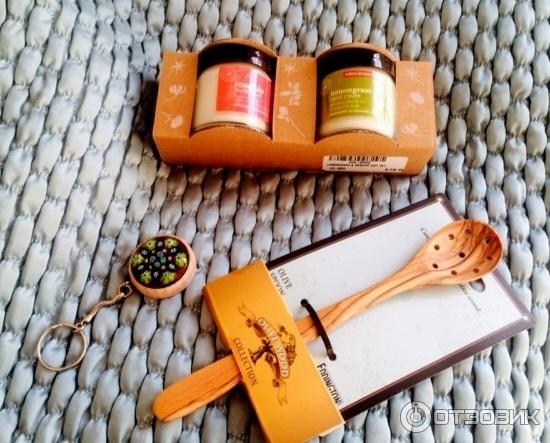 To sum up, I want to say that here you can spend a whole day with pleasure, with the company or with the family. To plunge into a truly warm atmosphere of the union of nature and man. I think that extraterrestrial civilizations would like this project very much!)

The Eden Project – a real garden of paradise, created from environmentally friendly materials, the project has a unique structure, attracting millions of tourists every year.

According to one legend, the castle of King Arthur was located on the territory of the county of Cornwall in England. Arthur made this place his capital and gathered around the brave, noble men of the time. The construction of a new site on this site has now become a landmark.

The Eden Project, the largest high-tech botanical garden with a high mission, is recognized as that site. The project is designed to teach people to treat nature as a wealth worth working for. People will be shown that the world around us can do without humans. The idea for “paradise” belongs to producer Tim Smith.

The entire project stands on the site of an old abandoned quarry. Because of this, the installation of such a large-scale place was not the easiest thing to do. The area of the structure is 25 hectares. During the construction, there were two technical challenges. First – first, there was no fertile soil at the site of the quarry. To solve the problem, 2 million tons of soil were delivered. Secondly, there was a high probability that the structure could be flooded. This is due to the fact that in Cornwall, it rains for almost 300 days. The construction was under the fear of one day being flooded. But it all turned out, and then a drainage system was installed. Finally, the quarry was partially in operation, and the project often moved its location. A scholar once said that building paradise drove so many people into hell. These words were confirmed in the fate of a local potter, Dominic Blackwell, who claimed that his dynasty had died because someone decided to show off by building a large greenhouse. At one time his pottery was sold in almost every store, but when construction began, all the potter’s labors came to naught.

The original design was based on a cylindrical structure. However, the chief designer Nicholas Grimshaw, having weighed all the nuances, changed the concept of the project, deciding to create a structure in the form of domes. Calculations were not made manually, everything was entrusted to computer technology. Everything was taken into account, including the way the sun’s rays glide across the surface. What was it for? The plan was to create a greenhouse with vegetation from all climatic zones. The climate had to vary considerably from room to room and change depending on the time of day and night. Because of this, the plan was to use as little electricity as possible. When the calculations came together, the designers began to build the domes.

The dome is a spherical-shaped structure with a metal frame. The four domes together formed a biome – an area of constant temperature. The dimensions of the structure were measured with enviable accuracy to the millimeter. When you look at the structure, it may seem that it consists only of hexagons, but it is not so. At the junction of the domes can be found figures of various shapes. A total of 830 frames are counted, of which 630 hexagons are hexagons. Why hexagons? The creators explained that hexagons can be found in nature quite often. And in general, it is the optimal shape for creating ideal conditions in a greenhouse. In the construction, each hexagon has three layers, representing a lens. Glass was used in the project at first, but then it was replaced by film. Because of this, depending on the time of day, the dome is either lowered or pumped up to create a pleasant microclimate. The film has a number of advantages. It transmits well needed by plants ultraviolet and has a low price. Plus this material is environmentally friendly to nature and decays after 25 years of use.

READ
How to spend a weekend in Finland

The idea for such a project dates back to the middle of the 20th century. One self-taught architect, Richard Fuller, asked himself: “Is it possible to create a structure that can help mankind survive under certain conditions without large investments and any scientific knowledge?” For years he conducted his single most important experiment. His work resulted in 28 patents, 25 books, and 47 awards. It was he who created the special domes, of which there are eight in “Eden. The “Eden” project fully confirmed Fuller’s thoughts.

“Eden” was created in the style of high-tech. It combined high-tech and nature. In England, this style is called – bio-tek. The project is fully environmentally friendly. Electricity is produced with the help of wind turbines, and water is collected in the special rainwater facilities.

The main characters of the project are numerous green plants. There are 135 thousand of them, represented by 12 thousand species. Many of them are included in the Red Book and are practically a single specimen. All plants are divided into climatic zones. This can be a zone of the middle zone, the Mediterranean zone, etc. An arid zone is planned. The leaders of the project argue that Eden is not an amusement park. It should be taken seriously. Each plant in the greenhouse has a card with a description and ways to use it in the home. For example, the calebasse tree is used to make drinkware. Various sculptural compositions on environmental themes can also be found in the complex. The most popular of them is a seven-meter-long robot-humanoid named WEEE Man. It consists entirely of non-working machinery weighing 3.3 tons. Before being installed in the complex, the robot toured almost all of Europe. This was done to attract people to environmental issues.

In addition to walking around the greenhouses, you can climb up on the platform and observe the entire Eden area. And if you’re lucky, take a hot air balloon ride. There are a number of cafes in the complex. The food, of course, will be grown in “Eden”. Leftovers are recycled and used to grow new plants.