Pisa is quite a tiny and cozy Italian town. In the historic center is the Piazza dei Miraculi with a whole architectural complex. The main structure is the Cathedral of Pisa, which Italians call Duomo di Pisa. It was built in honor of the Assumption of the Blessed Virgin Mary. The cathedral is beautiful in its design and is a real pride of the citizens of the city. It is considered a true masterpiece in the Romanesque style. The beginning of the construction of Pisa’s Cathedral is in 1063. At the initiative of the local archbishop B. Giovanni Giudice and under his constant supervision, the works continued for several decades. Enhanced by various elements, the Romanesque style began to take on a distinctive coloring. Even the expression “Romanesque Pisa style” appeared.

The tenacious eye of architecture connoisseurs cannot fail to notice some astonishing things. The open gallery above the entrance, for example, includes low semi-arches which were used in Moorish buildings. The interior decoration and the numerous mosaics correspond to the Byzantine direction. In this way the builders intended to show not only the richness of the city, but also its diversity and the presence of strong international ties. Sailors returning from the voyage shared their impressions of what they had seen and interesting ideas, which the builders were happy to adopt. In the process of construction there was a competition between the cathedrals of Pisa, Venice and some other cities. In order to realize the vainglorious plans of the townspeople, the best masters of the Middle Ages were invited.

From the works of writers of the XI century it is known that as early as 1092 the bishop of Italy held a service in the Cathedral of Pisa, but the documents indicate that it was consecrated only in 1118.

Alas, but the terrible fire of 1595 destroyed many paintings and constructions of the cathedral. Immediately after the tragedy the citizens zealously began to restore the main religious building of Pisa. For this purpose the most eminent masters from different parts of Italy came.

READ
What can be done with children in London, England? The cathedral of Pisa is a beautiful ensemble and a favorite landmark that has long stepped outside the city. It is famous throughout Italy. It amazes numerous tourists with its appearance and elaborate details. Each facade has its own features, the western side deserves the most attention. It depicts the Virgin Mary with the little Jesus surrounded by the four authors of the Gospel.

At the entrance to the cathedral, the massive gates are worth a close look. They were installed after the fire. On the bronze surface, covered with a centuries-old patina, are several large and small paintings on biblical themes.

The interior rooms of the cathedral are very bright and spacious, and are noted for their richness and skillful finishing. The main material used for decoration is black and white marble. Some elements are additionally covered with gilt. These include the vaulted ceiling and the coat of arms of the Medici family. The gaze of visitors is sure to stop at the beautiful nave, surrounded by columns in the Corinthian style. These columns were made long before the construction of the cathedral of Pisa. They were captured during the battle of Palermo and brought to Pisa.

One of the few works that survived the terrible fire was a beautiful mosaic. It depicts Jesus with the Virgin Mary and St. John. It is located on the apse and can be viewed by tourists.

The most valuable piece of art is the carved pulpit, by G. Pisano. It is justifiably called the most beautiful creation of medieval Italy. The pulpit rises on simple columns and pillars in the shape of the human body. It is as if the Atlanteans and Caryatids carry it on their backs. The reliefs fixed along the upper border of the pulpit depict the entire story of Christ’s life. In the Cathedral of Pisa one can see the tombs of important persons of the city. The left part of the façade keeps the crypt of its creator (Busceto Giovani). The tomb of St. Raniereus, who became the patron saint of Pisa, is located inside the cathedral. The remains of Henry VII and Gregory VIII are also buried here. Some tombstones were destroyed in a fire.

Surprisingly, the cathedral is slightly inclined. Similar to its famous bell tower, it has shifted because of the unstable ground. The angle of inclination is very small, but noticeable up close. The cathedral of Pisa continues to operate as a religious structure. In it services are held and religious holidays are celebrated. The mode of operation depends on the day of the week and the season. To learn more about the schedule, visit the website: www.opapisa.it. Admission to the grounds is free. To visit the museum or other areas of the complex you will need to buy a ticket.

Pisa is quite a compact and very interesting city. From the airport or train station you can walk to the Square of Wonders. If you carefully look at all the monuments and sights on the way, you can spend about 45 minutes. If you walk quickly, you can reach the Pisa Cathedral in 15 minutes. 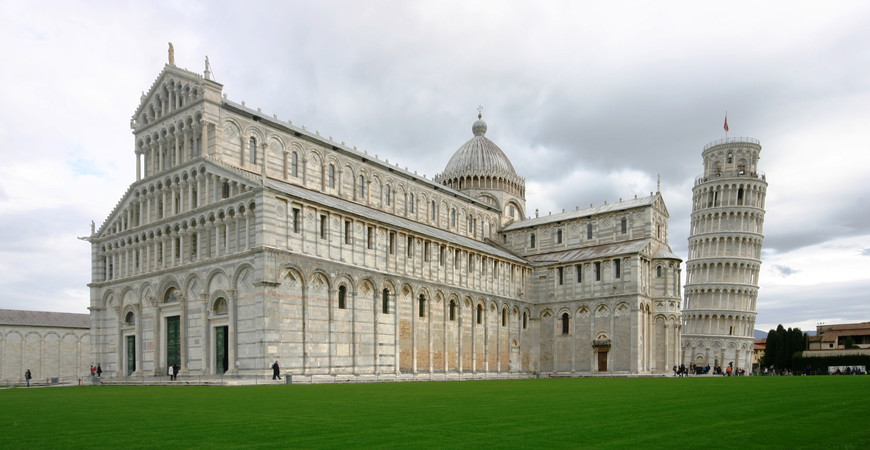 Pisa Cathedral (Duomo di Pisa) is the calling card of the tourist city of Pisa, located in the heart of sunny Italy. Every year thousands of people from all over the country come to Piazza dei Miracoli to see with their own eyes this beautiful piece of ancient art, to immerse themselves in the evocative atmosphere and to touch history.

Along with the Cathedral of Pisa in Piazza dei Miracoli you can visit the Tower of Pisa and St. John’s Baptistery.

The construction of the cathedral began back in 1064 and lasted almost 2 centuries. At that time, the ambitious Busceto di Giovanni Giudice, wanting to surpass the Venetians in the art of architecture with their Temple of St. Mark, conceived the design for a unique building symbolizing Pisa’s strong commercial ties with other nations.

Busquito took as his basis the idea of a mixture of different stylistic trends in architecture and added to the cathedral details borrowed from the Muslims, Byzantines and Lombardy. Thus a new style – Romanesque – appeared, and Busceto di Giovanni Giudice was conventionally recognized as its forefather.

For 36 years the architect kept a keen eye on the building process and after his death he was buried within the walls of the temple. On his tomb is engraved the date of the foundation of the cathedral and the victory over the Syrian Bedouins.

The subsequent completion of the cathedral and the design of the facade was undertaken by Rainaldo, who altered the shape of the building to give it the outline of a Catholic cross. The outstanding sculptors Guilielmo and Biduino were involved in the decoration. In 1118, Pontiff Gelasius II consecrated the unfinished cathedral to the glory of the Blessed Virgin Mary.

In the course of the construction, the exterior of the temple was changed many times. In 1595, during the reign of the Medici, the cultural monument was subjected to a severe fire that irrevocably destroyed valuable relics and three portals, which were later replaced by simple doorways. In the 17th century, adjustments also affected the interior of the building.

The reconstructions of the cathedral did not diminish in any way the cultural value of the cathedral, so in 1987 the Duomo of Santa Maria Assunta as part of the Piazza dei Miracoli ensemble was listed by UNESCO.

Features of architecture and style

The exterior of the Cathedral of Pisa is unique and therefore easily recognizable around the world. It is made in the form of a Greek cross and has a massive egg-shaped dome on lancet arches.

The length of the building is 96 meters, and its height is 28 meters. Fundamental building on all perimeter is decorated by the multi-row arcades and columns.

The main entrance, decorated with an intricate mosaic scattering, is located from the western facade, on top of which the statue of the Virgin Mary with the baby is located. The doorway canvases with three-dimensional paintings made in the XVI century in the workshop of the Giambologna illustrate biblical stories.

The south wing, which functioned as the main entrance in the Middle Ages, is accessible from the belfry. Its bronze door is the only artifact that survived the fire and is kept in the museum.

The semi-circular ledge of the eastern facade, which conceals the altar, keeps a large bronze statue of the mythical creature hippogriff on its top. According to some sources, it is the spoils of war that came to Pisa from Arab countries in the 10th and 11th centuries.

Particularly attentive tourists may note that the cathedral, slightly tilted to the side. Of course, it is not as obvious as in the case of the Tower of Pisa, but this architectural feature of the monument is clearly visible if you stand on the sidewalk facing it.

The interior of the cathedral is impressive in its scope and incredible scale. Visitors particularly note the smooth lines of the columns, the Giovanni pulpit with its sculptural displays, the frescoes and mosaic drawings of the altar, the gilded ceiling topped with the coat of arms of the Medici family, and the patterns of black and white marble.

Panorama inside the Cathedral of Pisa in Italy – Google Maps

The cathedral is the tomb for the nobles of Pisa. Within the walls of the Catholic temple rests not only its creator, but also the Roman Emperor Henry VII, as well as St. Raniere.

A key element of the interior is the pulpit, built by Giovanni and Nicollo Pisano in the 13th century and survived a devastating fire. For a long time during the reconstruction it could not find a place for it. Only in 1926 the rostrum was rebuilt.

The structure for performances of the preacher has the form of an octagon and is based on 9 columns, which are framed in the form of human figures symbolizing the sinner, the heretic, the unbaptized and the cardinal virtues opposite to them. On the trims of the rostrum are depicted scenes from the New Testament.

Not far from the lectern you can find a hanging lamp, whose measured movements helped Galileo discover the law of the pendulum.

The Cathedral’s mode of operation varies depending on the season:

It is important to note that on holidays there is a special regime: the first visitor will be able to walk through the temple territory only at 1 pm, so when planning a trip to Pisa, it is important to clarify the official website Duomo di Santa Maria Assunta the current information about the opening hours of the monument.

How to get to Pisa Cathedral in Italy