The Little Mermaid is the most romantic and popularized symbol of Denmark, and not a single tour of Copenhagen can do without her. The graceful bronze statue representing the main character of the famous fairy tale by Hans H. Andersen, appeared in the capital’s harbor in 1913 and since then has been an integral part of it.

Save on your trip!

Video: The Little Mermaid in Copenhagen

The story of The Little Mermaid: it’s not the fairy tale, it’s the ballet’s fault

Contrary to popular belief, this statue of the Little Maiden was not erected out of a desire to pay homage to Denmark’s greatest storyteller. It was a romantic passion that the son of the “beer king” Karl Jacobsen had for the prima donna of the Royal Theatre – Ellen Price. Fascinated by her talented performance as the Little Mermaid in the eponymous ballet, the heir to the beer empire suggested that the dancer immortalize her beauty and grace in metal. As a result, the rich man not only initiated the creation of the sculpture, but also paid for all the associated costs.

Edward Ericson, whose earlier projects had already been favorably received by critics and the general public, was commissioned to sketch the statue. However, a discrepancy arose in the midst of the work: Ellen Price flatly refused to be naked for posing. No persuasions had any effect on the obstinate ballerina, as a result Erickson had to use his own wife as a model. So, the image of the sea dweller can be literally called a collective one: the sculptor’s wife’s body is crowned with a charming head with recognizable features of the famous dancer. However, Erickson’s descendants refute this version, saying that the Little Mermaid’s appearance is entirely copied from the artist’s companion.

The base of the sculpture is a group of rocks, on which a large boulder is placed at an angle. Freezing in a relaxed and thoughtful pose, the fairy-tale heroine sits in the center of this improvised rock, leaning against it with one hand. What is remarkable: the lower part of the girl’s body is depicted in a “transitional state”. Surprisingly, the sculptor has managed to perfectly recreate that fantastic moment when the slender female legs merge into an elastic fishtail under the influence of witchcraft charms.

The Little Mermaid or “Lady of the Sea,” as the Danes have dubbed the sculpture, cannot boast of outstanding dimensions. The statue is only 1.25 m high and weighs 175 kg. But as time has shown, popularity and general love do not depend on the size of a work of art. Almost immediately after the opening of the Little Mermaid monument rumors about the new unusual sight of Copenhagen spread far beyond the borders of the kingdom, turning a modest statue into a symbol of the capital’s port. Moreover, the monument has acquired clones. So, for example, copies of the fairy tale heroine can be found in Paris, Rome, Tokyo, Sydney and even Saratov. It is possible that there would be many more copies if Ericsson’s heirs did not claim their copyright on the original image. Now, everyone who will dare to borrow an idea of the Danish sculptor, is obliged to make to the piggy bank of his enterprising descendants the traditional cash contribution.

A curious fact: Erikson’s Little Mermaid is not the only one sea maiden in the Danish capital. For example, not so long ago in the Copenhagen harbor appeared twin famous statue. The second sculpture is installed away from the classic Little Mermaid and its view is more like a sad mutant from a fantasy movie. The author of the monument Bjorn Noergaard called his experimental creation “Genetically Altered Paradise”, thus alluding to the dire consequences of genetic engineering. In the same harbor you can find another underwater world inhabitant, which appeared here in 2007. The nude beauty with a fishtail peeking out from under the rock doesn’t look as poetic as Erikson’s sculpture, but she’s even more appetizing, which automatically makes her a hit with male tourists.

To somehow protect the monument from encroachments, the city authorities have organized a special floodlighting, which illuminates the bronze figure at night, thereby preventing vandals from getting to the statue. At one time there was even a police officer assigned to the Little Mermaid, although the number of hooligan pranks against the landmark has not decreased. Annoyed by constant incidents, Danish government representatives have been talking since 2007 about moving the statue further into the bay, but no concrete action has been taken about it.

In 2010, for the first time ever, the legendary sculpture disappeared from Copenhagen Harbor. It turned out that the Little Mermaid had simply “left” for the then World’s Fair in Shanghai. To protect the monument from vandals, the route of her travels was kept strictly secret, and at the exhibition, a personal guard was assigned to the charming nymph. All the while (from March to October), the inhabitants of the Danish capital admired the video installation that replaced the sculpture.

The Little Mermaid is the most popular attraction in Copenhagen, so when you go to the statue, be prepared to meet a crowd of similarly romantic itineraries. By the way, it is believed that touching the statue gives happiness in love, so if you’re going to ask the sea maiden in the affairs of amorous, choose a windless day. Otherwise, you risk getting soaked through, because the slightest movement of air masses causes waves in the harbor, crashing on the base of the monument with a myriad splashes.

To admire the most romantic statue of the Danish capital, take the city train S-tog at the station “Norreport”. You will have to go to the stop “Osterport”, from which you should turn to the Langelinie Embankment. You can find the famous sculpture by following the signs that say “Lille Havfrue”.

READ
Japanese Onsen in Hero - a source of strength and energy

On August 23, 1913, the Little Mermaid was unveiled in Copenhagen. The sculpture was 1.25 meters high and weighed about 175 kilograms. Probably not a single monument in the world – let alone one unconnected neither with politics nor ideology – has been vandalized so often as the much-suffering Danish Little Mermaid. 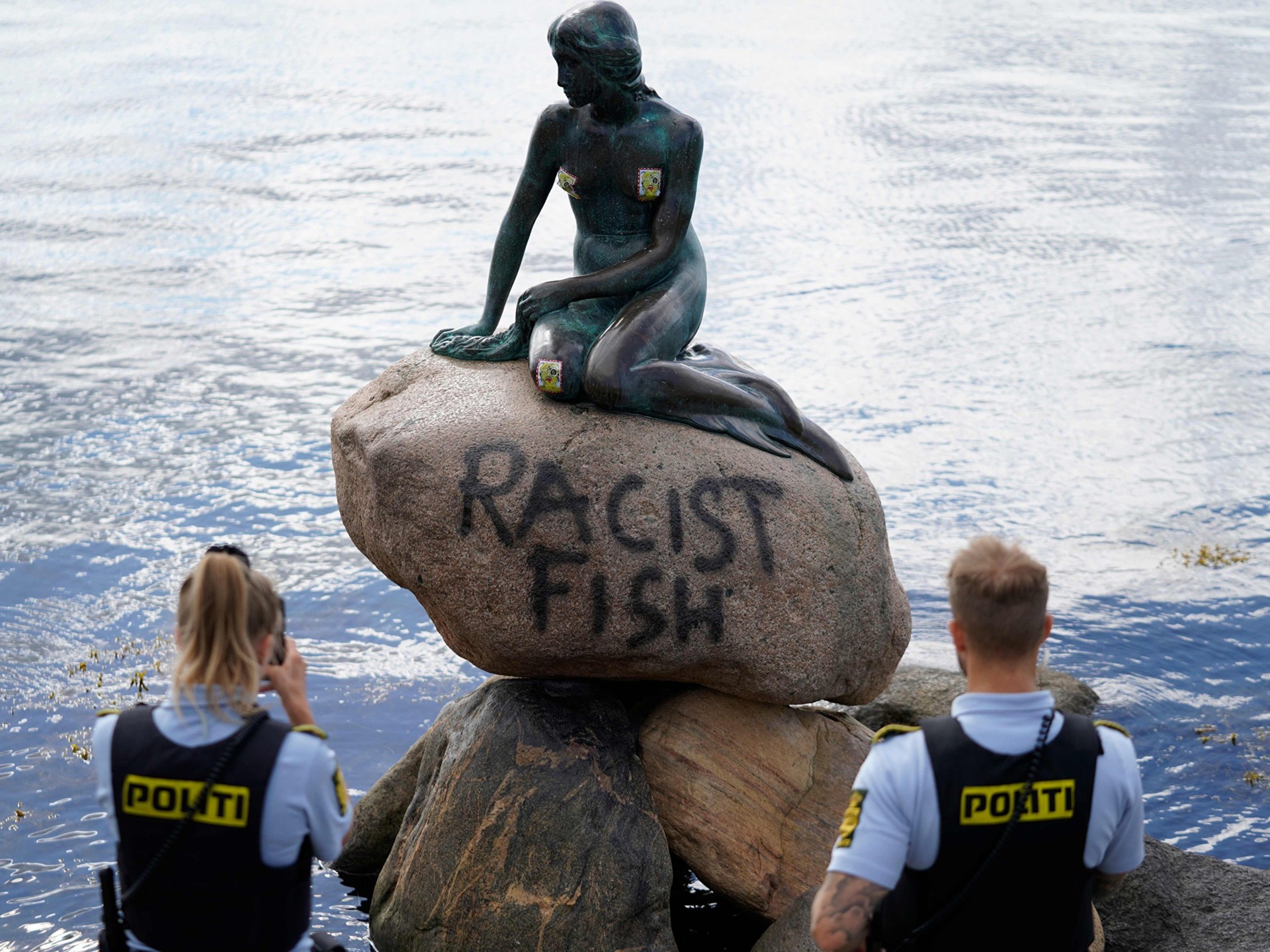 The Little Mermaid monument is one of the most famous symbols of Copenhagen and a popular tourist attraction. The image of the heroine of Andersen’s tale was embodied in bronze by sculptor Edward Eriksen in 1913. Her prototype was Ellen Price, whose ballet performance in The Little Mermaid so impressed the son of the founder of the Carlsberg brewery, that he asked the sculptor to portray the dancer as a sea creature. 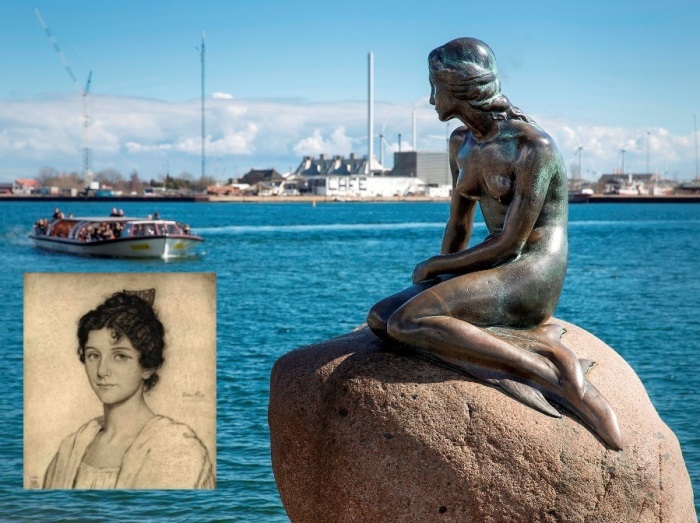 The Little Mermaid is a small bronze 125 cm tall and weighs 175 kilograms and is located in the port of Copenhagen on a granite pedestal.

Probably no other statue in the world has been mutilated so many times. The bronze Little Mermaid seems to have suffered as much as her fairytale prototype. For 50 years the Little Mermaid sat peacefully on her rock and even survived World War II and the fascist occupation of Denmark without any damage. And then it began… 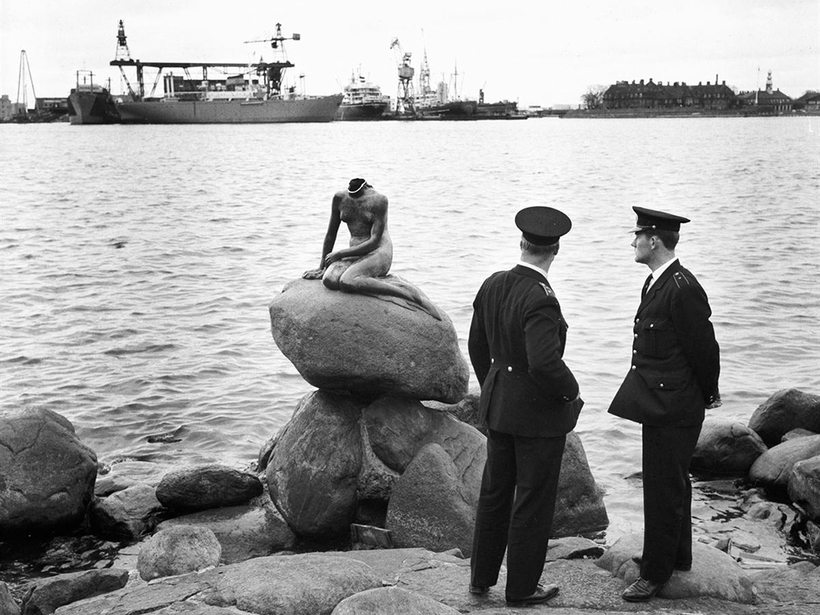 The head of the statue was never found, so a new one had to be created. 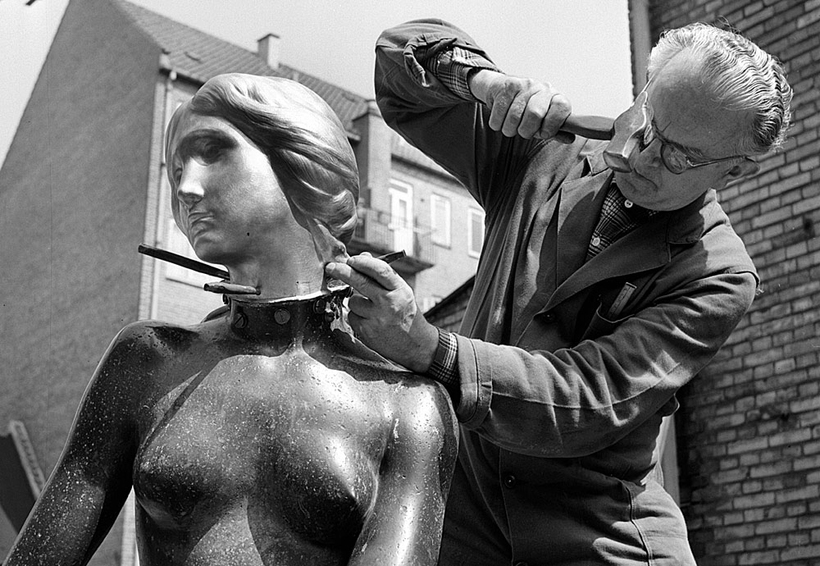 After this act of vandalism, the original plaster model of the Little Mermaid, created by Eriksen, was hidden by the sculptor’s heirs in a secret place. Unfortunately, it then came in handy more than once. 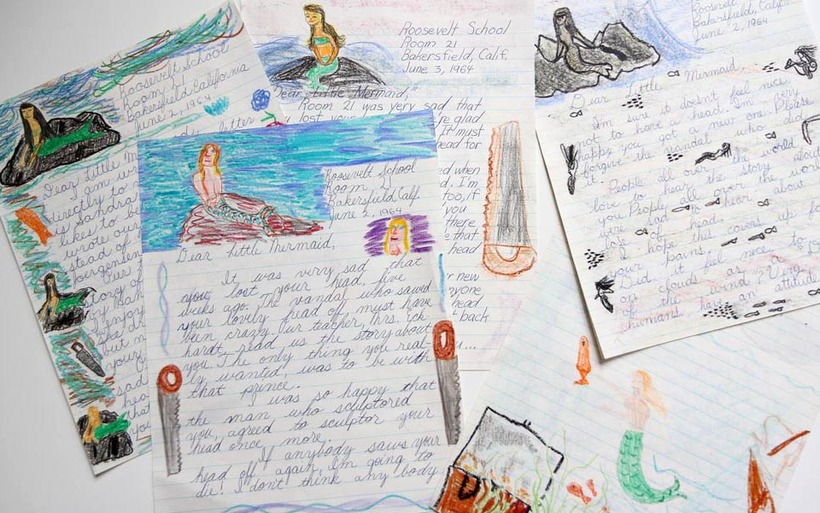 The scandal with the Little Mermaid became the event of a world scale: journalists of the different countries covered the situation in their publications, the mayor’s office of the Danish capital received thousands of letters of sympathy and money for the statue restoration. Ironically, this has contributed to an even greater popularization of The Little Mermaid, and a flood of tourists to Denmark. 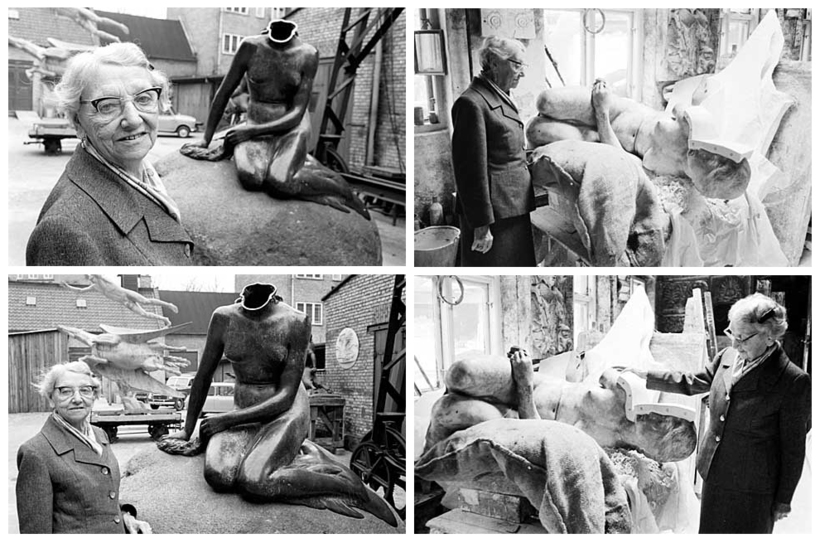 On the wave of interest in the subject, journalists contacted Ellen Price, who became the model for the statue. The famous ballerina at the time was already 84 years old, and the photos above are the only ones in which she is depicted with the Little Mermaid. Ellen died four years later, in 1968.

Thirty-three years after the incident, Jørgen Nasch confessed in his book that this act of vandalism was the work of his own hands: this is how the previously convicted “situationist” artist fought against “outdated classical art”.

But in the fate of The Little Mermaid, Nasha’s attack was not the first and, unfortunately, not the last. In 1961, 1963 and 1976, she was doused in red paint and had her panties and bra painted on. 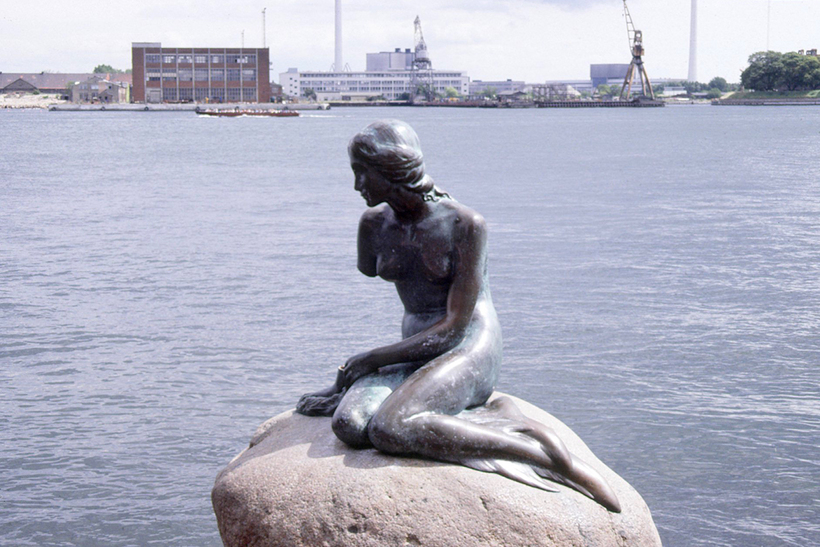 The second time the Little Mermaid was beheaded was in January 1998. The head was searched for almost a month, and in early February it was dropped off anonymously at a local TV studio. For a whole month after that, access to the sculpture was closed.

And in 2003, vandals even arranged an explosion near the statue, which caused the Little Mermaid to fall from its stone into the bay, where it was found only two days later.

In 2007, Copenhagen authorities decided to move the statue further into the harbor to avoid repeated vandalism and also to prevent the constant attempts of tourists to climb the sculpture. But the water didn’t stop the vandals either. 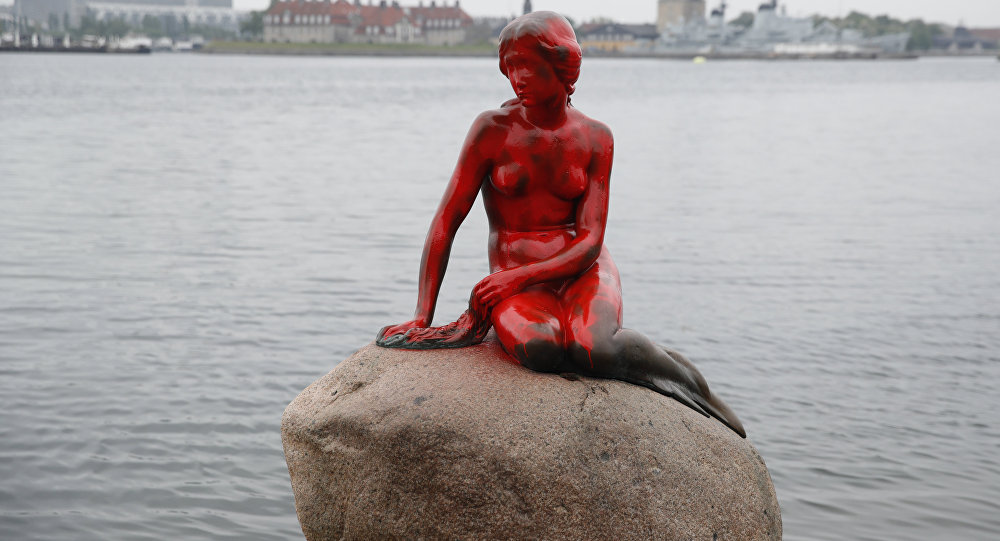 Activists repeatedly used the sculpture for protests – it was doused with paint, dressed in a burqa twice, and in early 2020, Free Hong Kong was written on it with red paint. 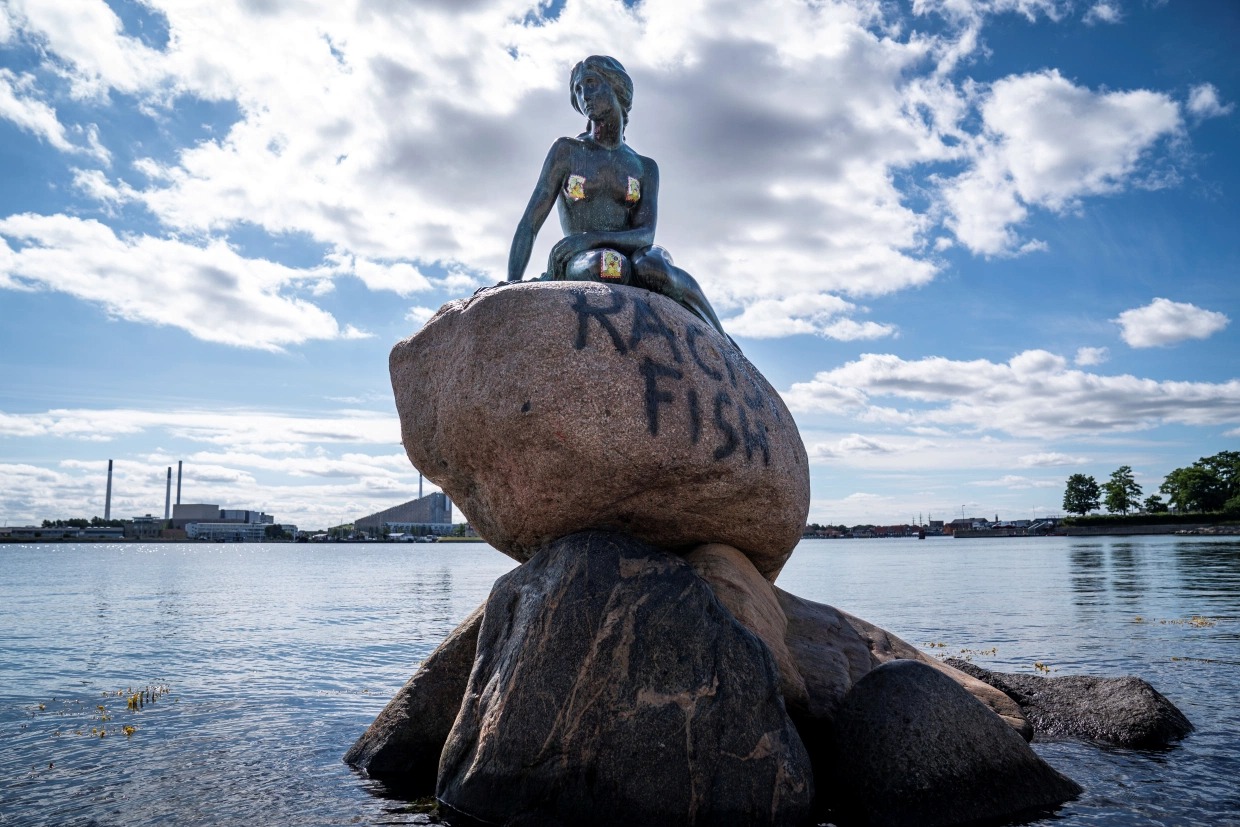 On July 3, 2020, the perpetrators wrote Racist Fish in paint on the capstone where the sculpture is located.

By mid-2020, activists supporting protests against police brutality and oppression of black people had turned against monuments to historical figures who had been implicated in a “racist” past – the slave trade or colonizing state decisions. 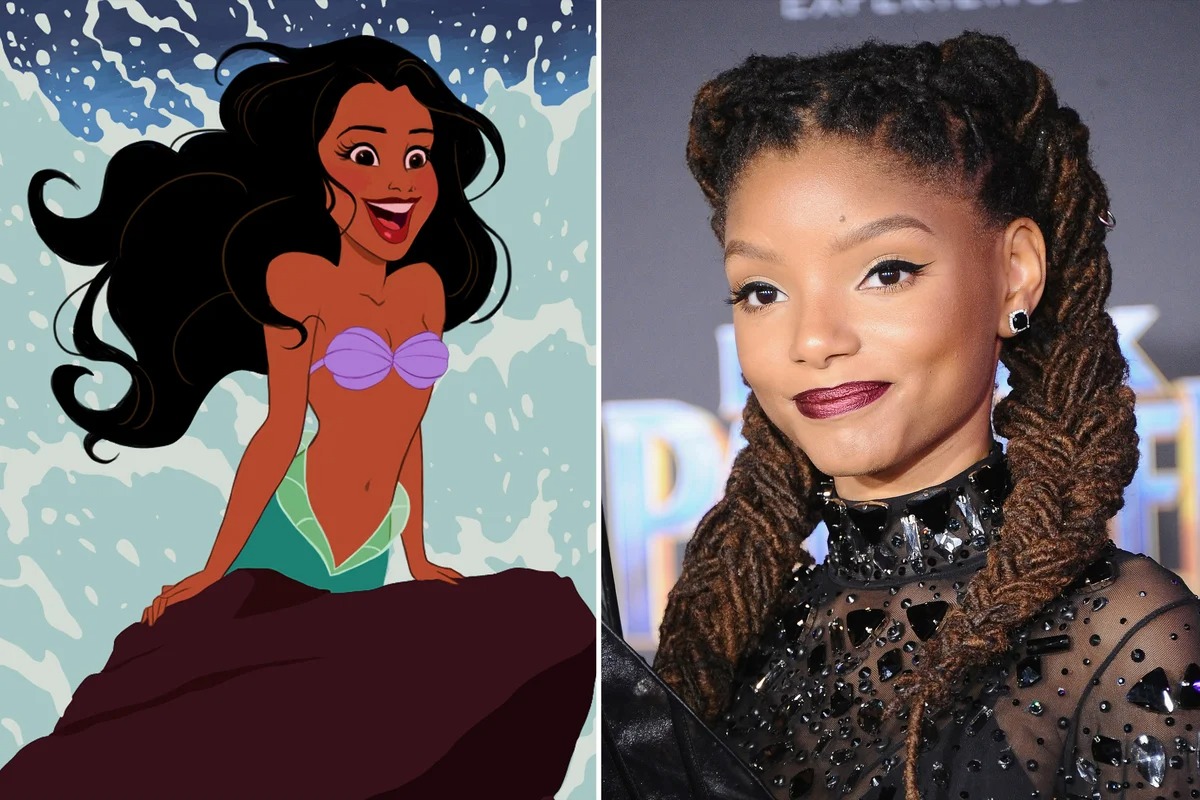 In part, The Little Mermaid was part of that discussion when Disney announced plans in 2019 to make a live-action version of its famous 1989 animated film. African-American artist Hallie Bailey was cast in the lead role.

Each time the monument was restored and then put back in its original place to the delight of tourists and to the appeasement of the inhabitants of the city. Every Dane is already convinced that everything will be fine as long as the Little Mermaid, cast in bronze, sits unharmed on her stone.