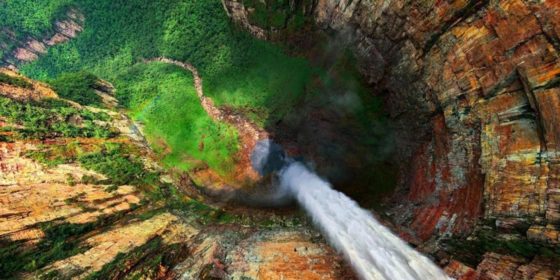 To reach the ground stream flying from the top of the highest waterfall of the planet, it is necessary to overcome about a kilometer. The speed of falling water is so great that before it reaches the ground about three hundred meters, it simply scatters into dust, creating the impression of a bubbling, boiling and powerful stream of water forever disappearing into thin air. And below, among the endless ocean of green jungle, the marvelous Churun River appears as if born out of nothing.

The Falls with the Most Depth

Angel Falls are located in southeastern Venezuela, in the municipality of Gran Sabana in the state of Bolívar, among the jungles of the Plateau de Guiana, in the north of South America. The nearest major city to the falls, Ciudad Bolivar, is located 600 km north of it, and from the nearest village of Canaimi it is 50 km in a southeasterly direction (on the geographical map of the world this unique phenomenon can be found at the following coordinates: 5 ° 58′ 3″ N, 62 ° 32′ 8″ W). 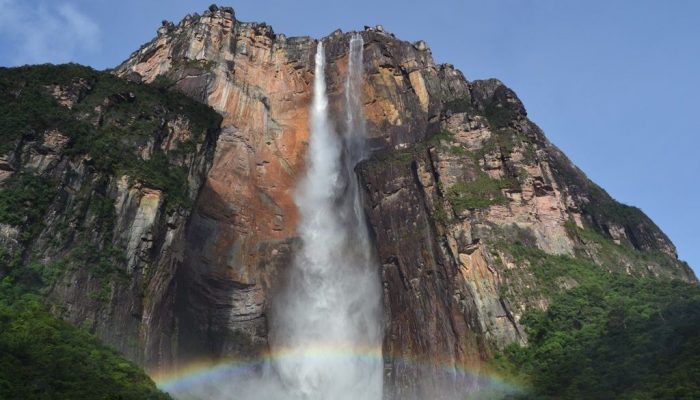 Despite such remoteness from the civilized world, life near the waterfall is bustling: people from all over the world come to see it. And this is not surprising at all, since Angel Falls is the highest waterfall on our planet (the total height of 1054 meters). It is not for nothing that the inhabitants of the Pemon Indians called it Kerepakupai-Mera, which means “Waterfall with the greatest depth.

The Angel Falls originated in the Churun River, which flows from a hillside on the Guiana Plateau in South America. The plateau is notable because it consists of huge plateaus, the base of which is red sandstone and frozen lava. They rise above each other in the form of huge staircases with steps, the height of which is several hundred meters.

One of these steps is the largest table mountain in Venezuela, Auyantepui (interestingly, the Pemon Indians interpret the name in two ways: one of their versions says it means “Mountain of the Devil,” the other says “Possessions of the God of Thunder”). The Churun, zigzagging down the Guiana Plateau, enters a plateau that is also the summit of the Auyantepui, which covers 700 km², and gradually approaches its precipice. The speed of the river’s flow increases, and it begins its fall with noise and roar (interestingly, the width of the water stream during the rainy season exceeds a hundred meters).

At first, the water travels 807 meters, and then, after running into an obstacle – another 172 meters. One little-known fact is that the river, having made a notch in the upper edge of the cliff, begins its free fall not from the very edge of the plateau ledge, but 80-100 meters below. This is the direct reason why geologists have not yet been able to determine the exact height of the falls: some claim it is 979 m, others 1054 m.

The flow of water erupting downhill during the rainy season, which lasts in South America from May to November, is extremely large: every second the falls passes through itself about 300 cubic meters of water. When it is not raining, the Angel Falls are smaller and divided into two smaller streams or sometimes they are just a narrow trickle.

Lost in the Jungle

Because the waterfall is located in a wild and sparsely populated area in the tropical jungle, for thousands of years only the nearby Pemon Indians were aware of it. They were convinced that evil spirits lived on top of the mountain, so they never climbed to the top of the cliff.

The civilized world learned of the existence of the falls only in the 30’s of last century, when the Venezuelan pilot Juan Angel flew here in search of diamonds (the local Indians always talked about the stones, which could be mistaken for gems).

Flying around the area, the pilot noticed a number of tepuyas next to each other and assumed the deposits had been found. When Angel returned a few years later, one of the landing gear had broken while trying to land at the top of the mountain, so he had to go down on his own. Despite the extremely difficult descent, the pilot, his wife, and two other companions were able to descend without casualties – and eleven days later they returned to the civilized world with a story about the enormous waterfall and were able to draw public attention to it.

It is a rather interesting fact that they managed to get out of the jungle extremely quickly, as an expedition of five men organized some time later, armed with a map, with precise coordinates, using machetes and axes, fighting their way through thickets of vines and bushes, spent more than twenty days on the road. When they arrived at the place, their discovery shocked them: it turned out that the found waterfall is 20 times higher than the famous Niagara Falls. As a result of this expedition, a full description of the waterfall was given, its height was determined, and it was named after the man who discovered it.

Interestingly, several years ago, Venezuelan President Hugo Chavez wanted to name the waterfall as it is called by the tribe living in the area – Kerepacupai-Meru, arguing that the waterfall appeared on Venezuelan territory long before Angel found it. But the name did not catch on, and he backtracked, saying it was only a statement intended to protect the Indians’ rights to use the historic name.

How to Get to the Falls

Since Angel Falls are surrounded on all sides by jungle for many kilometers and there are no special roads to it, it is generally recognized that it is considered one of the most difficult waterfalls in the world. There is a positive side to it, because the nature around it has managed to maintain its pristine beauty: here you can often see anteaters, porcupines, sloths, deer, monkeys, jaguars.

This enabled the creation of Canaimi National Park and then allowed UNESCO to list it, and with it the waterfall, as a World Heritage Site.

The waterfall can be reached either by small plane or by motorized canoe (there is no possibility to travel by car). To do this, travelers first arrive in Kanaimi and then choose the type of travel. Most tourists choose air transport, which is not the best solution, because it is not always possible to see the falls well: the rock from which it falls is often shrouded in clouds, especially during the rainy season.

READ
Cossy and the Cevennes, a Mediterranean agro-pastoral cultural landscape

Therefore, travelers who want to get the best possible view of this amazing phenomenon of nature, it is advised to prefer a boat. The tour usually lasts from one to five days, the road one way takes about five hours, and the time allocated to see the waterfall depends entirely on the desire of tourists. Interestingly, if the trip fell during a dry period, and the flow of the descending water is small, at the foot of the waterfall you can even swim in a small pond.