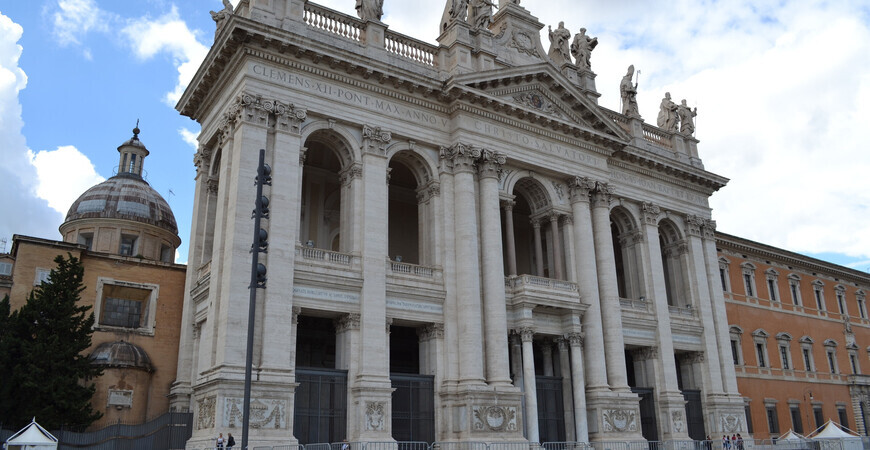 The Cathedral of St. John the Baptist on Lateran Hill, better known as the Lateran Basilica or Basilica di San Giovanni in Laterano, is the oldest public church in Rome and the oldest basilica in the entire Western world, uniquely named the “archasilica.” Representatives of Catholicism have given it the title “Basilica maior,” which translates as “Great Basilica. Only the highest ranking churches have such an honorary title. Within the boundaries of Rome, there are four basilicas with this title. In addition to Lateran, these are St. Peter’s Cathedral, San Paolo Fuori le Mura, and Santa Maria Maggiore. The Cathedral of St. John the Baptist, though not as widely known, is placed above the others. Even the inscription above the entrance states that it is “the church for all other churches. The Archazilica, which houses the pulpit of the Roman bishop, is included in most pilgrimage routes through the Eternal City.

In ancient times, the palace of the Lateran family was built on the site where the Basilica of San Giovanni in Laterano stands today. During the reign of Nero, a member of the family named Plautius was accused of plotting against the emperor. The accusation provoked the confiscation of property. A further chain of events led to the Lateran house falling into the hands of Constantine the Great as a marriage dowry.

It is known that Emperor Constantine accepted Christianity and presented the Lateran Palace to the Bishop of Rome. The palace basilica was remodeled and expanded, making it the residence of Pope Sylvester I. It eventually became the seat of the popes. Originally the cathedral was consecrated in honor of Christ the Savior, but in the 10th century Pope Sergius III proclaimed John the Baptist as the heavenly patron, and after several centuries Pope Lucius II dedicated the temple to John the Evangelist. Thus, the Archasilica is co-patronized by two saints at once, but its main patron is still Christ the Savior.

The Lateran basilica and palace remained home to the popes for almost a thousand years, until Clement V moved the center of the papacy to Avignon. The famous ecumenical councils of the Catholic Church were held in the temple. The inside of the basilica was adorned with precious gifts from the powerful. In the V century all the splendor was looted by the invading Vandal tribes.

READ
The 34 best sights of Madrid - descriptions and photos

During the 70 years, while the papal residence was based in Avignon, the largely forgotten Basilica of San Giovanni in Laterano in Rome fell into disrepair. Two fires caused the greatest damage to the structure, one in 1307 and the second in 1361. Money for reconstruction was allocated immediately. Still, the archasilica and the palace lost their former splendor.

Interesting facts about the Lateran Basilica

The most interesting facts about the Lateran Basilica are inextricably linked to the history of the papacy and Catholicism:

How to get to the Lateran Basilica

The Basilica of St. John Lateran is outside the Vatican. Its exact address is Piazza di San Giovanni in Laterano.

There is a metro station “San Giovanni” next to the site. Train lines A and C pass through there.

To reach the Lateran Basilica by car from the city center, the easiest way is to take Via Merulana, which leads directly to Piazza di San Giovanni in Laterano. Tourists wishing to use cab services can call a car through the online application Uber. It will save both time and money.

But the most pleasant way to get around Rome is on foot. Via Merulana, Via Domenico Fontana, Via dell’Amba Aradam, and many more little streets will lead you to the desired location.

The Cathedral of St. John Lateran in Rome is open daily from 7:00 to 18:30. The ticket can be presented at the entrance in printed form or on a smartphone.

Tour of the Cathedral of St. John Lateran in Rome

The Basilica of St. John the Baptist on Lateran Hill is not only considered the main cathedral of Rome, its status in the church hierarchy is higher than all Catholic churches in the world, including St. Peter’s Cathedral in the Vatican. The most important church of the Christians is also the oldest: its annals go back to ancient times. The unofficial name of the basilica, “mother of all the churches of the world”, comes from the inscription on its facade: “The most Holy Lateran Church, mother and head of all the churches of the city and of the world”.

READ
The 20 best sights of Mozhaisk - descriptions and photos

Main facade of the Cathedral of St. John the Baptist

History of the Basilica

In distant times, where the temple now stands was the palace of a noble Roman family, the Laterani. After one of its members participated in a conspiracy against Nero, the Laterani family became disgraced and the property belonging to it was confiscated. In 313 the Lateran palace and the land next to it were given by Emperor Constantine I to the Roman bishop. A basilica was then erected near the palace, and in 324 it was consecrated in honor of St. John the Baptist. For many centuries this basilica was the main church of the entire Christian world, and the palace was the papal residence. By the XII century, the complex was rebuilt and expanded, consecrating new rooms in the name of John the Theologian, and since then the basilica has had two patrons.

The pediment of the Cathedral of St. John the Baptist in Rome

In the 14th century, at the time of Pope Clement V, the main city of the Catholic Church became the French city of Avignon. The abandoned “Mother of Churches” fell into disrepair and suffered twice from severe fires. By the time the papacy returned to Rome, the church had fallen into complete disrepair. The Vatican was chosen as the seat of the pontificate. In XVI century the old basilica was demolished by order of Pope Sixtus V, and in its place began to build a new temple. In the XVI-XVII centuries, architects Domenico Fontane and Francesco Borromini worked on its construction. In 1735 the work was completed. The last in a line of successive architects was Allesandro Galilei, who designed the facade of the temple.

Architecture and interior of the basilica

The “calling card” of the architectural appearance of any temple is the main façade. The basilica on the Lateran hill has a portico supported by monumental columns. The austere facade is enlivened by a balustrade in Baroque style, above which are 7-meter high statues of Christ, John the Evangelist, John the Baptist and the Church Teachers.

Sculptural group above the main entrance to the Basilica

Between the powerful columns are 5 entrances to the church with loggias above them. One of the entrances – on the extreme right – is called the Holy Gate and is opened only in jubilee years. The timpan of the portico is decorated with a mosaic depicting Christ, transferred from the predecessor basilica. The floor of the inner rooms is also its “heritage”, it was made in the XIII century by masters of the Cosmati family, as well as the cloister adjacent to the temple with beautiful twisted columns. The temple has some more ancient features, such as marble, bronze and granite columns dating from the 4th century. The rectangular niche on the left side of the facade is home to an ancient statue of the Roman Emperor Constantine. The bronze doors of the main entrance are even older – they were created in the 3rd century for the Curia of Julius in the Roman Forum, from where they were taken to decorate the Basilica of St. John Lateran in the 16th century.

Interior of the Basilica of St. John the Baptist on Lateran Hill

The five-aisled basilica has the richest interior decoration. The ceiling of the main aisle is supported by caissons and the vaults of the side aisles are in the form of domes. The painting of the ceiling is presumably by Pirro Ligorio. The splendid 16th century organ is in the northern transept of the church. In the southern transept is a large altar under a fourteenth-century Gothic canopy. The altar’s baroque ciborium is encrusted with precious stones.

The altar with the ancient canopy over it

In the apse is the papal pulpit; the vault above it is decorated with mosaics depicting the holy spirit, the cross and the saints. The interior design of the temple was made in the 16th century by Francesco Borromini and has changed little since then. In the 18th century, a number of sculptures depicting apostles, prophets and saints were added to the decoration of the church.

Relics of the temple

It is believed that in the papal altar is hidden a fragment of a cedar plank, which is believed to have served as a table during the last supper of Christ. Above the altar, behind the carved lattice, are two gilded reliquaries with the heads of the apostles Peter and Paul. Moreover, among the relics of the temple are a fragment of Our Lady’s robe and a part of the sponge, by means of which the crucified Christ was poured out.

Chair of the Pope in the Cathedral of St. John the Baptist

The world-famous Holy Stairs were incorporated into the temple complex by the architect Domenico Fontana, by order of Pope Sixtus V. It is said to have been used by Jesus to stand trial before Pilate. In the 16th century, because of the large number of pilgrims, the marble steps were covered with walnut planks. Through holes specially made in the boards, the faithful can touch the relic. It is allowed to climb the Holy Steps only on their knees. The Holy Stairs lead to the Papal Chapel, to the Holy of Holies. On the architrave above the chapel is the inscription, “There is no place more holy than this.”