The amazing city of Graz, Austria.

Graz (Austria) – the most detailed information about the city with photos. The main sights of Graz with descriptions, guides and maps.

Graz is a city in southeastern Austria, the capital of Styria. It is the second most populous city in the country after Vienna. Graz boasts one of the best preserved historical centers in Europe, which is included in the UNESCO World Heritage List and is filled with grandiose baroque buildings and interesting sights. A large hill, the Schlossberg, towers over the picturesque Altstadt. Many of the surviving historic buildings are influenced by Italian architectural styles. And Graz itself is an important cultural, educational and scientific center of Europe.

Things to do (Graz): 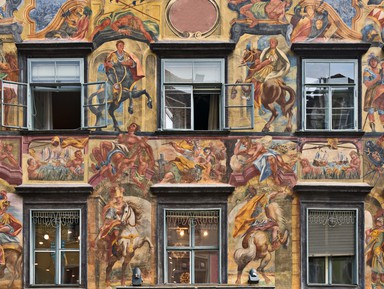 Stroll through the center of majestic Graz

Extensive sightseeing tour with a professional guide to the main attractions 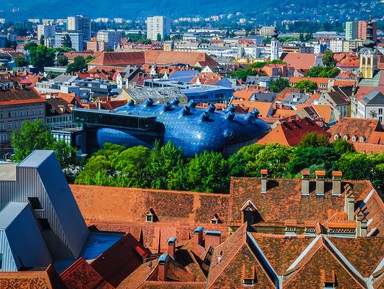 Get to know Graz!

Capture the history and sights of Austria’s second-largest city!

Graz is located on the river Mura, 200 km south-west of Vienna, near the Slovenian border and 50 km from Slovenian Maribor. The climate is temperate. Because of its location, south-east of the Alps, Graz is protected from the cold west and north winds. It is much warmer than the rest of Austria and has more sunny days. 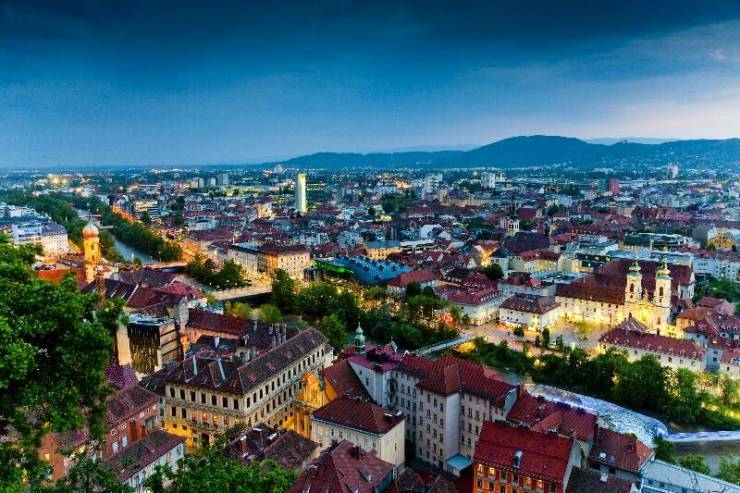 The roots of Graz go back to the Roman past. The Romans built a small fort at what is now the old town. In the Middle Ages, the Slovenes built a larger fortress. The name “Graz” comes from the Slovenian word “gradec”, which means a small castle. 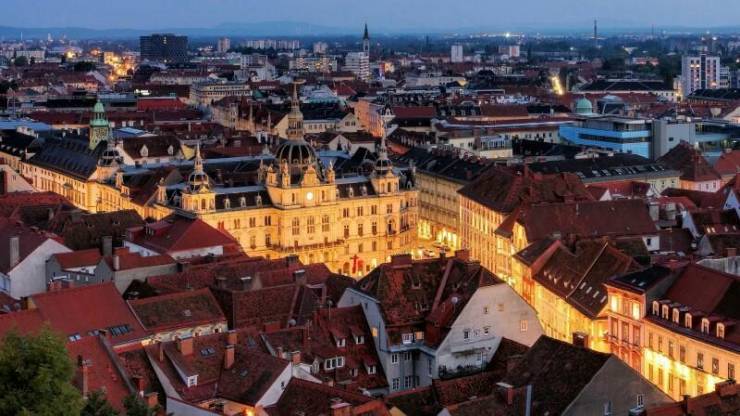 Graz was first mentioned in 1128, when the dukes of Babenberg transformed the place into a major trading city. In the 15th century, under the Habsburgs, the city became the capital of Inner Austria. In the 16th century, Graz was repeatedly attacked by the Turks. Although the fortress located on the Schlossberg was never taken. During World War II, the city was liberated by Soviet troops and was virtually unaffected by bombing. 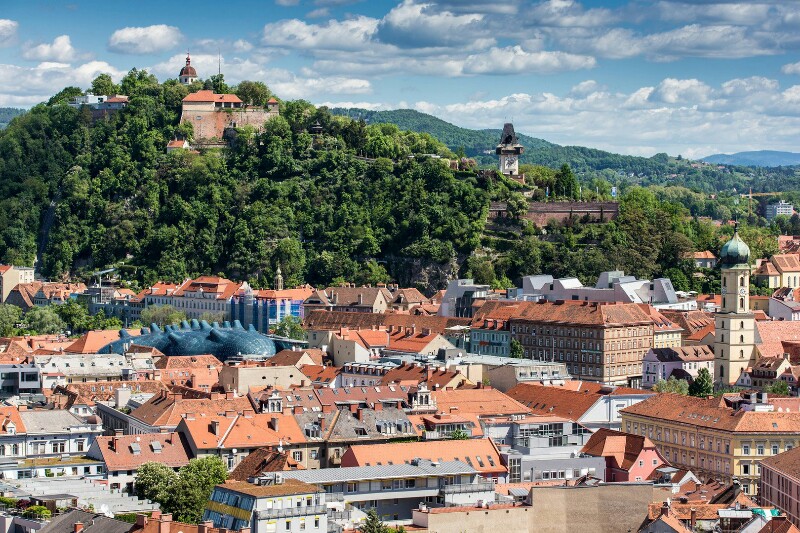 Graz Airport is 9 km to the south of the city center. It is connected by regular flights to Amsterdam, Frankfurt, Istanbul, Munich, Stuttgart, and Zurich. From the airport to the center you can take bus 630, 631 and train S5.

The main station (Hauptbahnhof) is located on the western edge of the historic center. Direct trains go to Graz from Vienna, Salzburg, Zurich, Zagreb and Budapest. Near the city pass the freeways A9 and A2.

Don’t forget to buy a bottle of Kernöl (pumpkin seed oil). This oil is typical of Styria and has a unique and pleasant taste. It can be purchased at Kaiser-Josef-Platz, Lendplatz.

The most important shopping street of Graz is Herrengasse. Many stores are located in Mariahilferstraße, Schmiedgasse, Sporgasse. The City Park shopping center is located on the southwestern edge of the center of Graz. Large shopping centers outside the historic center: Shopping City Seiersberg (can be reached by bus 78) and Murpark (streetcar line 4). 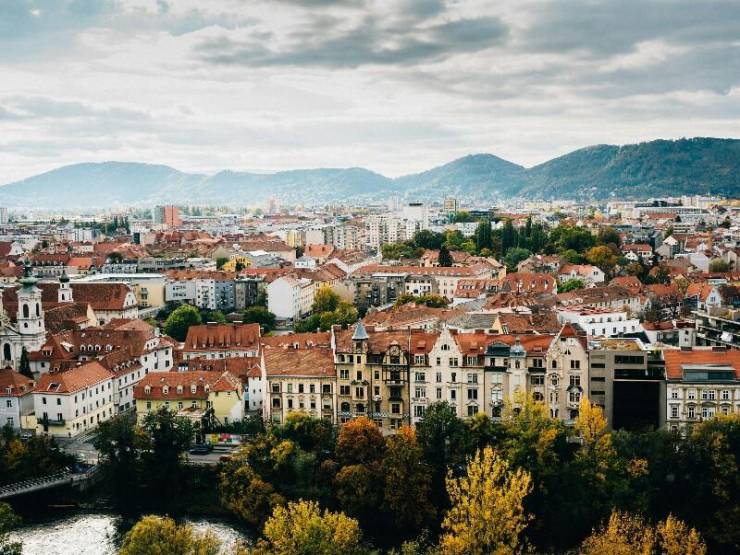 The Old Town (Altstadt) of Graz is a UNESCO World Heritage Site and contains many medieval houses and Italian Renaissance buildings, secret courtyards and narrow streets. The main square – Hauptplatz – is located on the left bank of the river Mure. There is a statue of Archduke Johann. 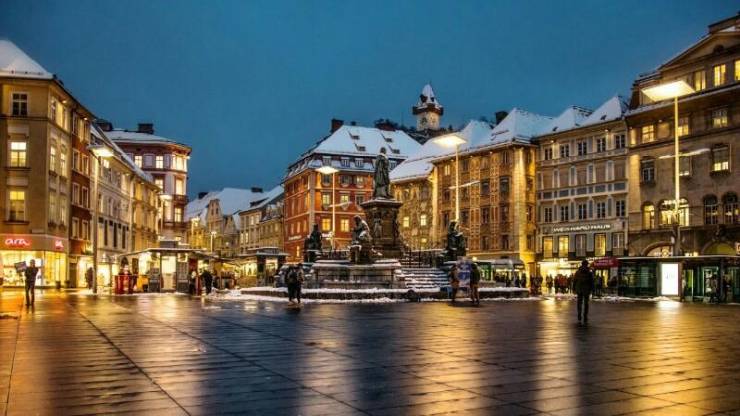 On Hauptplatz is the town hall, built in the late 19th century, the historic 17th-century Luegg House with its attractive arcaded façade and stucco decorations. 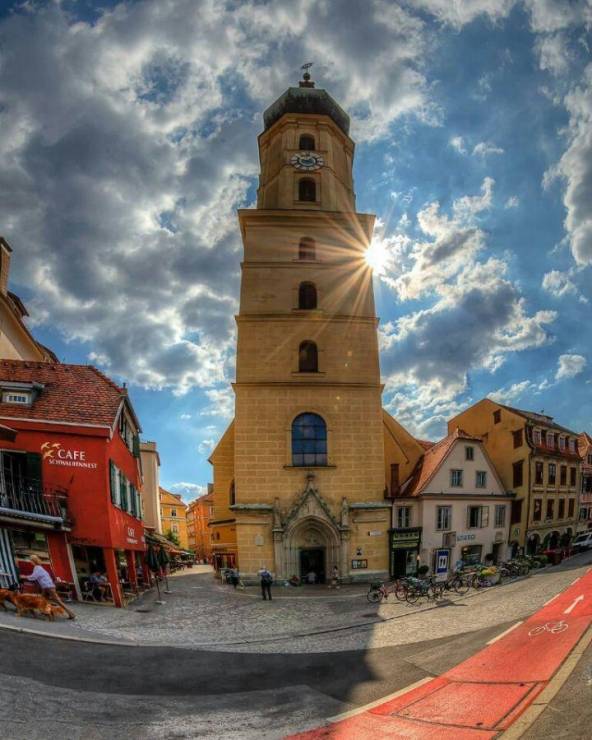 West of the main square is the Gothic Franciscan Church (Franziskanerkirche), known for its tall 17th-century west tower and a late Gothic nave with a ribbed vaulted ceiling. The Herrengasse pedestrian area with its many beautiful old mansions, including the beautiful and picturesque Gemaltes Haus with frescoes from the 18th century, is a must for a stroll. 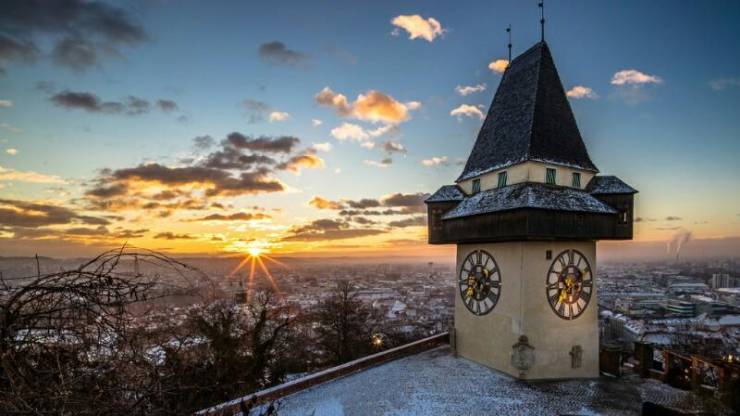 The clock tower on Schlossberg

Schlossberg (“Castle Mountain”) is one of Graz’s most popular landmarks, offering stunning views of the old city. The massive medieval fortifications were mostly dismantled after the Treaty of Vienna in 1809. Only the old Tower with the 13th-century clock survived. 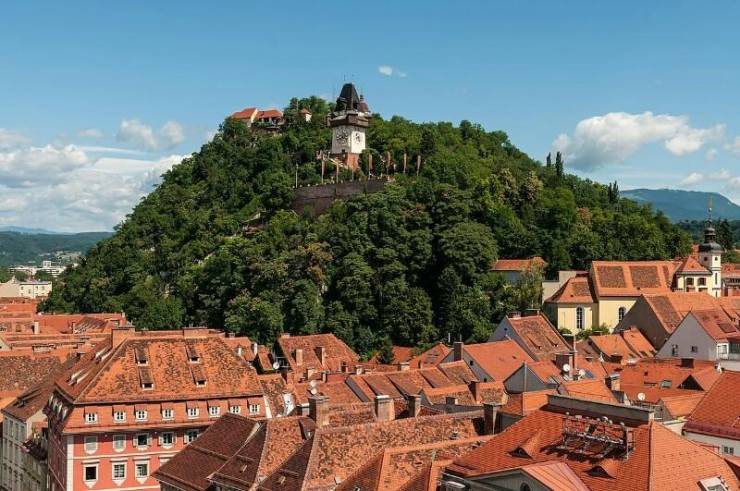 The hill has a height of 473 meters. You can climb it by cable car. There are several other sights here as well: the 94-meter Turkish well (Türkenbrunnen) and the 35-meter bell tower (Glockenturm) from 1588 with an eight-ton bell. 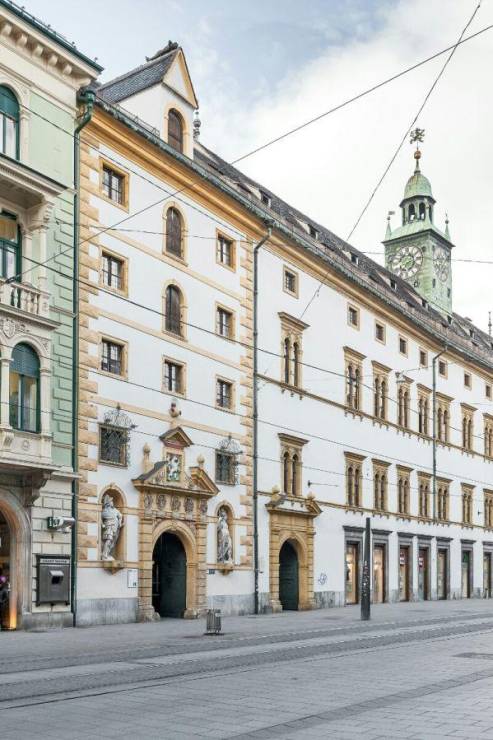 The Styrian Arsenal (Landeszeughaus) is the largest collection of historical arms in the world. The Armory was created in 1642 and today it is the only arsenal in Europe that is preserved in its original state. It includes over 30,000 exhibits, which cover historical periods from the 15th to the 19th century. Collections include: arms for common soldiers and sophisticated armor sets for the nobility, small arms and accessories, artillery and edged weapons. 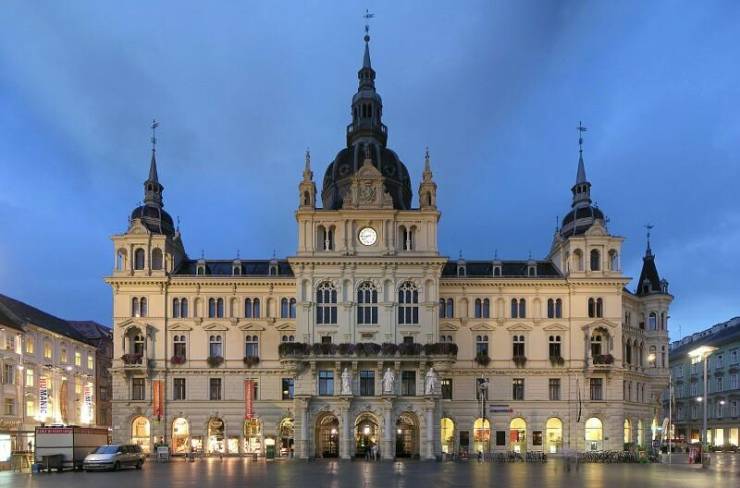 The Landhaus is one of the best Renaissance buildings in Austria. It is located in the heart of the old town on Herrengasse. This building with magnificent facade was built in 1565. It has a beautiful arcaded courtyard and Renaissance fountain, luxurious halls and exquisite ceilings. 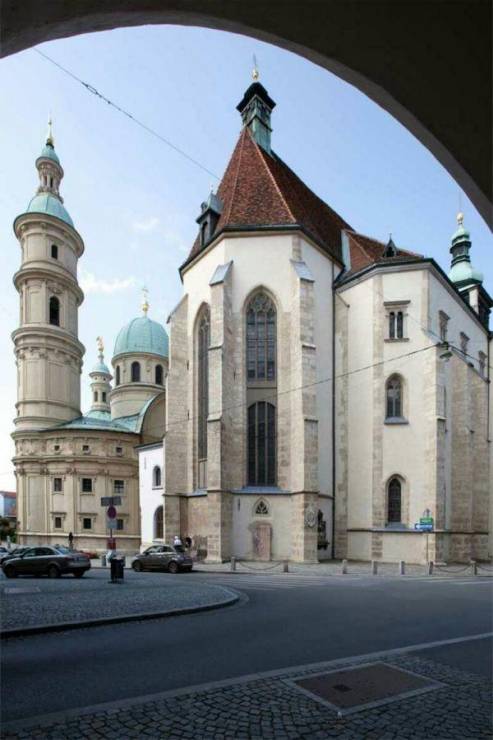 The Graz Cathedral is a late Gothic church built between 1438-1462 on the site of an earlier religious building. Of particular note is the main portal decorated with the coat of arms of Emperor Frederick III. Remains of a late Gothic fresco from the 15th century can be seen on the southern wall. The interior of the church is Baroque. 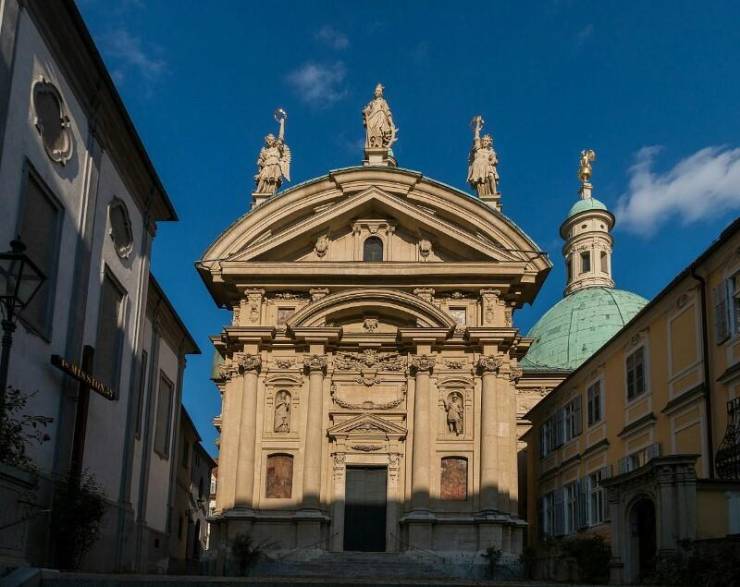 Mausoleum of Emperor Ferdinand II and Church of St. Catherine

The mausoleum was built by an Italian architect for Emperor Ferdinand II in 1614. It is one of the first domed structures outside Italy. The interior of the mausoleum is decorated with intricate frescoes. There is also a red marble sarcophagus built for Ferdinand’s mother, Maria of Bavaria. 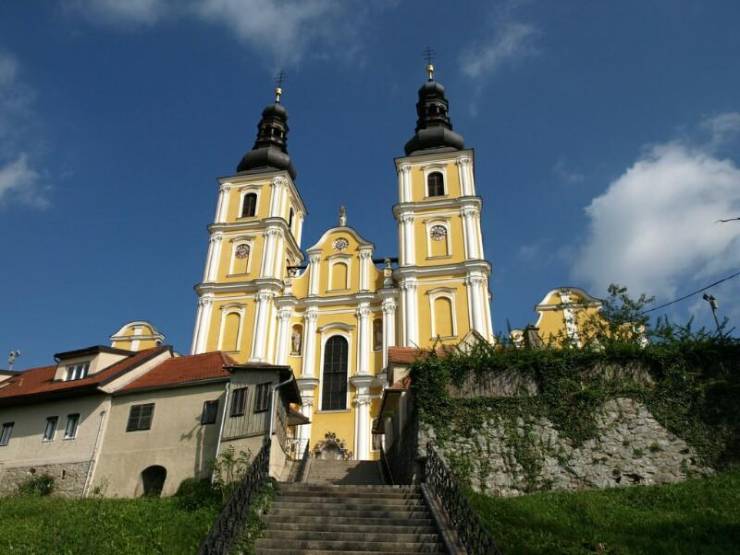 The Basilica of the Mariatrost (Birth of the Virgin Mary) is a beautiful baroque basilica located on top of a hill. It has a beautiful Baroque interior, an impressive altar and frescoes. The basilica offers a stunning view of the surrounding area. 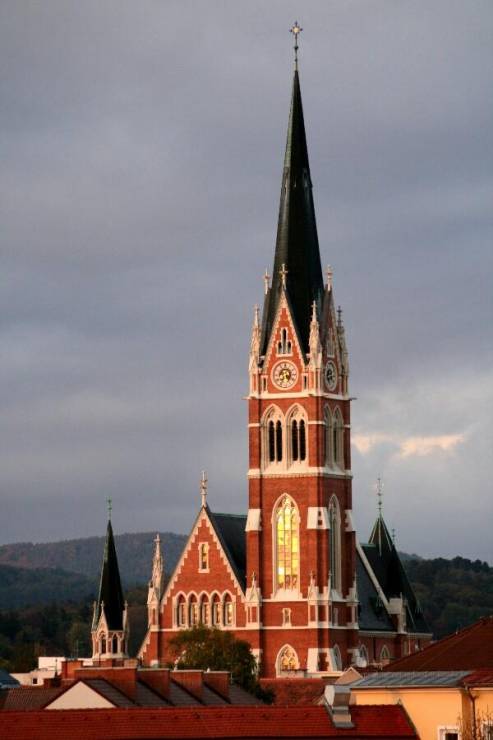 Church of the Sacred Heart

The Church of the Sacred Heart is a neo-Gothic church built in 1887. It is the largest religious building in Graz and has the third largest church tower in Austria (109.6 m) as well as stunning stained glass windows. 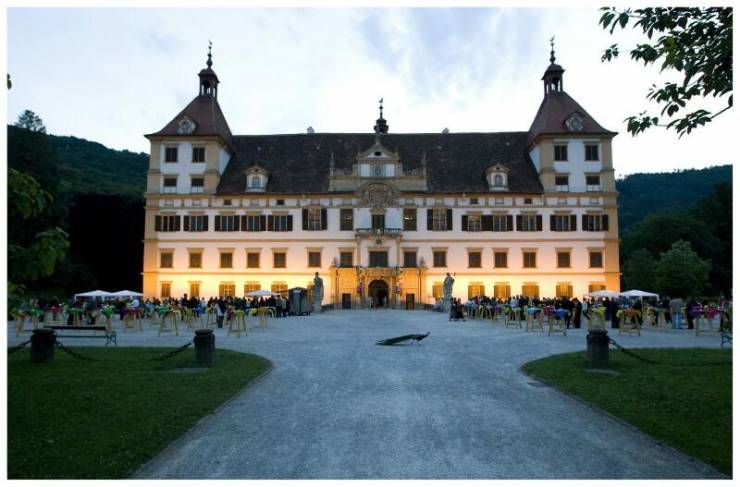 Eggenberg is a stunning 1635 baroque palace with four towers in the corners, located three kilometers west of the city center. It was built on the site of an ancient medieval castle from the 13th century. Inside you can view more than 600 magnificent works of art, including a lapidarium with one of the largest collections of Roman stones in Austria, a coin collection and a gallery with works from the Romanesque period and the late Baroque. 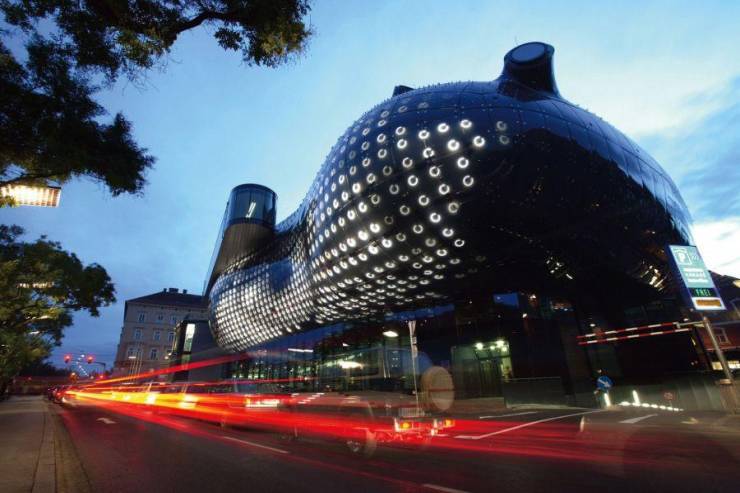 The Kunsthaus is a contemporary art museum housed in a stunning, innovative building. 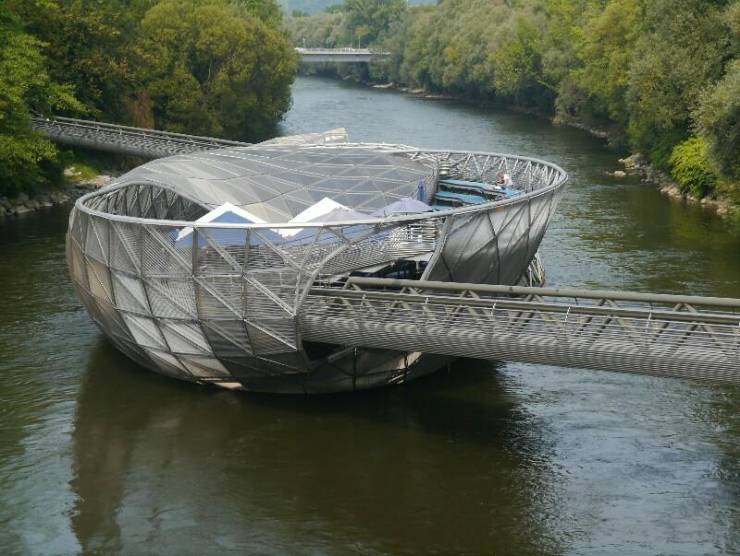 Murinsel is an artificial island built of steel in 2003. The middle part consists of a unique amphitheater used for concerts and other events, as well as a café and a playground with a rope maze.