When asked about the most interesting temples located in Asia, what will you say? Most often, the grandiose Taj Mahal in India or, for example, Angkor Wat in Cambodia immediately comes to mind. Of course, the list is not limited to these names. Today we decided to tell you about less known, but no less beautiful temples that are sure to make you wonder!

This temple will surprise anyone – it is located right in a cave, located near the city of Mumbai, and as if hovering among the rocks. Hidden from view for hundreds of years the temple is well preserved. Scientists estimate that it was built as early as the second century B.C. 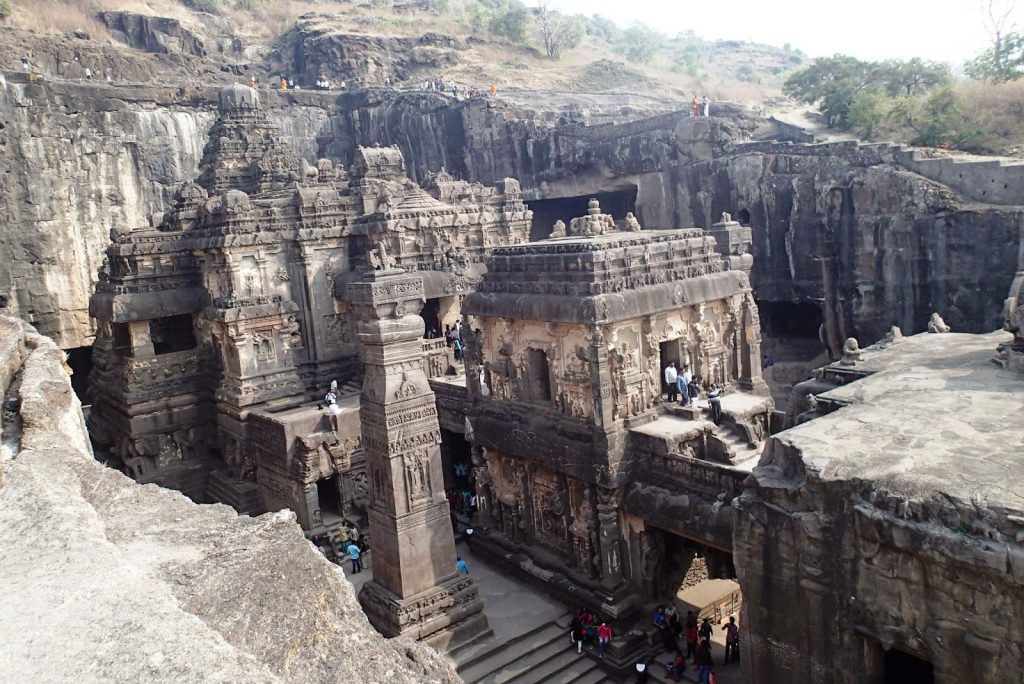 Kailas Temple is one of the thirty temples built on the two kilometers here, it represents Mount Kailas, the mystical home of God Shiva, and throughout the temple area Shiva is present in every possible way.

This place attracts attention, of course, for its grandiose appearance – the temple is carved out of solid rock, decorated with columns, intricate carvings, sculptures and arcades.

Prambanan – this is not just one temple but the entire complex, which includes two hundred and forty stone shrines dedicated to various Hindu gods – Brahma, Shiva, Vishna and others. The complex was built in the tenth century during the rule of the Sailendra dynasty, at the moment it is considered one of the largest temple complexes in Indonesia. Many of the shrines at different times have been resolved, now you can see only the ruins. But the appearance of the surviving structures will shock anyone – huge in height, decorated with reliefs, which are illustrations of the epic Ramayana. 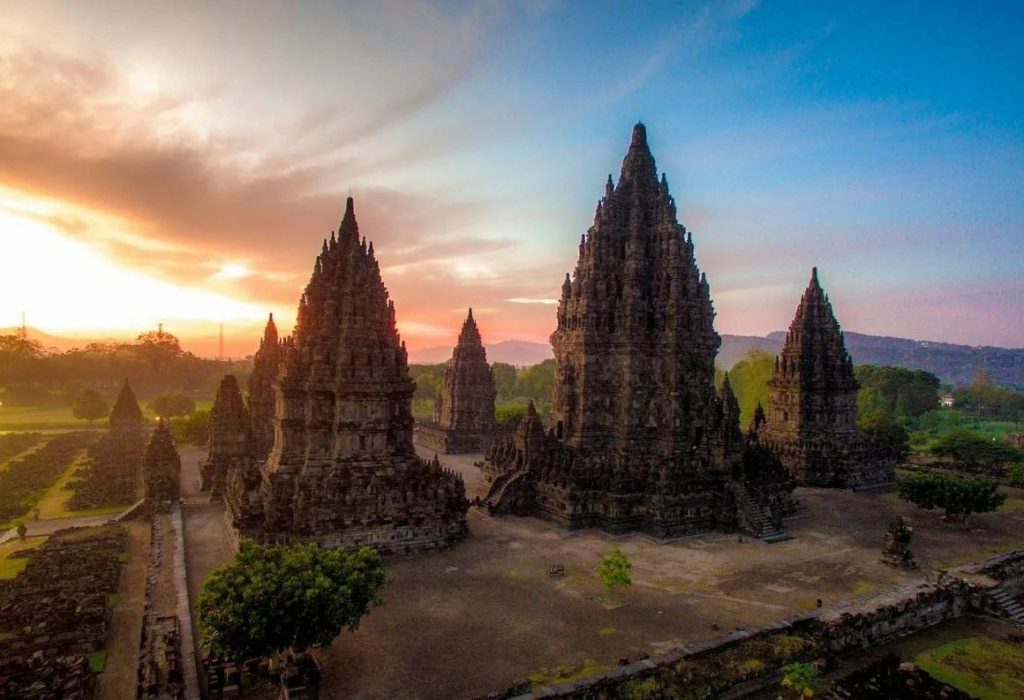 READ
The 25 best sights of Bolgar - descriptions and photos

The temples once caused quite a cultural furore as they promoted Mahayana Buddhism with Hindu influences. The whole center of Central Java was studded with Buddhist monuments, the most famous of which is considered to be the majestic Borobudur. If you decide to visit the area we recommend the Amanjiwo Resort, located two kilometers from the monuments and an hour and a half drive from the temple complex. Situated amid tropical rainforest and rice paddies, it offers indescribable views of the temples and region’s natural beauty spots. 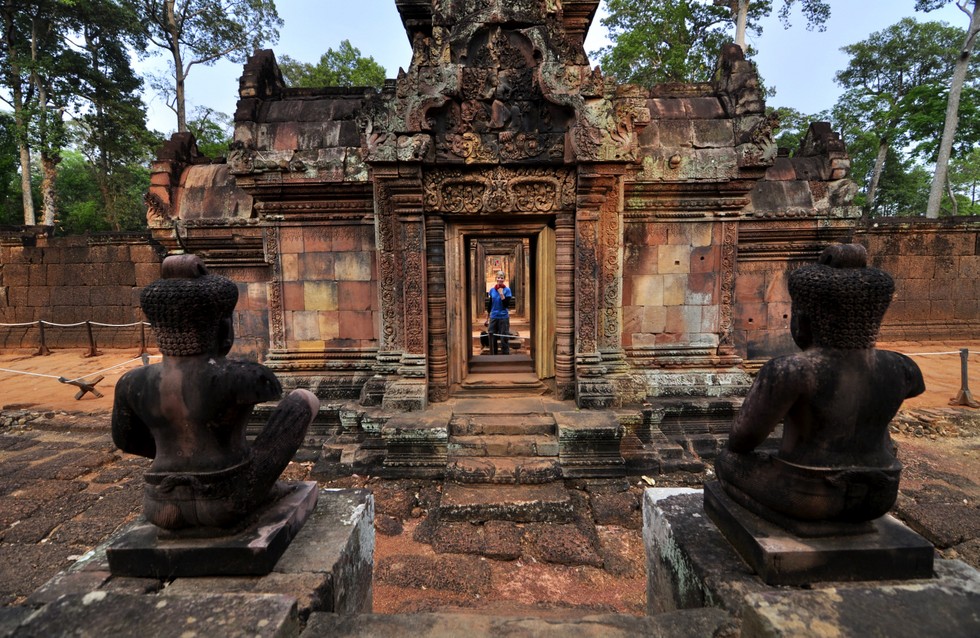 Despite its small size, the beautiful sandy pink temple is also worthy of your attention! Its name means “Women’s Citadel”. The beautiful and intricate carvings illustrating Hindu tales and legends are said to have been carved by women. The trip to the temple will not be too comfortable because of the bumpy roads, but in our opinion, this will not diminish the experience of the trip. Unlike neighboring Angkor Wat, which by the way, is much more popular among travelers, the carvings of this temple are more unique and expressive due to the softer material. There is some evidence to suggest that the same sandstone that makes up the famous Petra in Jordan was used in this case . The so-called female devatas, deities, are depicted on each entrance. 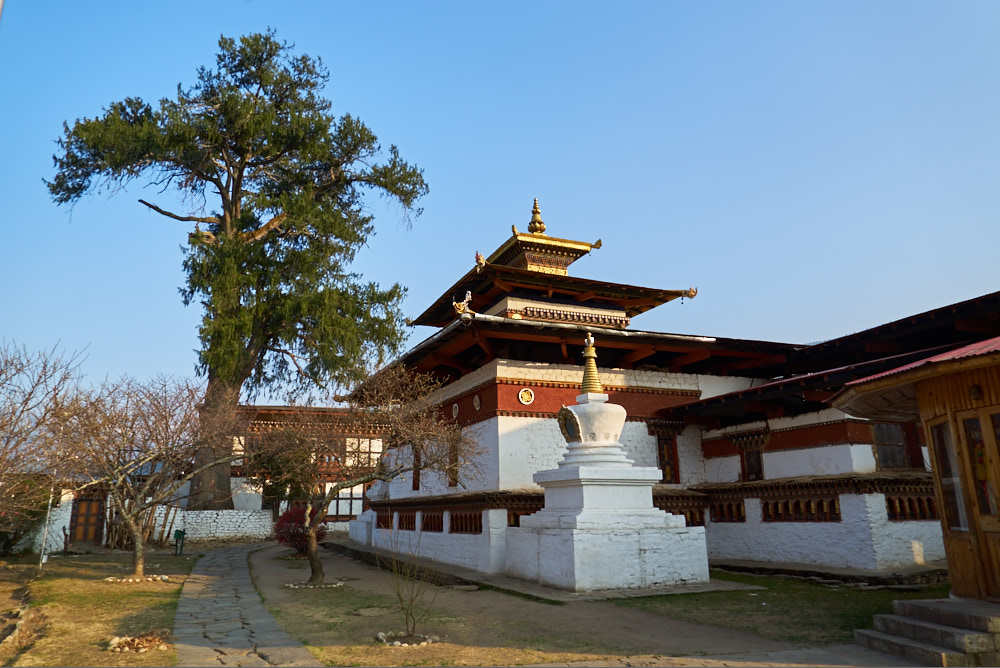 Not everyone knows, but really beautiful country Bhutan has a huge variety of temple complexes and monasteries, today we want to draw your attention to one of them, which is located near the town of Paro in a very famous monastery called “Tiger’s Nest”, hanging from a cliff. Kiichu Lakhang is one of the two oldest temples in the state. Its construction was the initiative of the Tibetan king Songsten Gempo back in the seventh century. With the construction of the temple associated several local legends – according to one of them, it was built overnight on the left leg of a giant demoness, when she was lying on the ground, and was intended to protect against the spread of Buddhism. 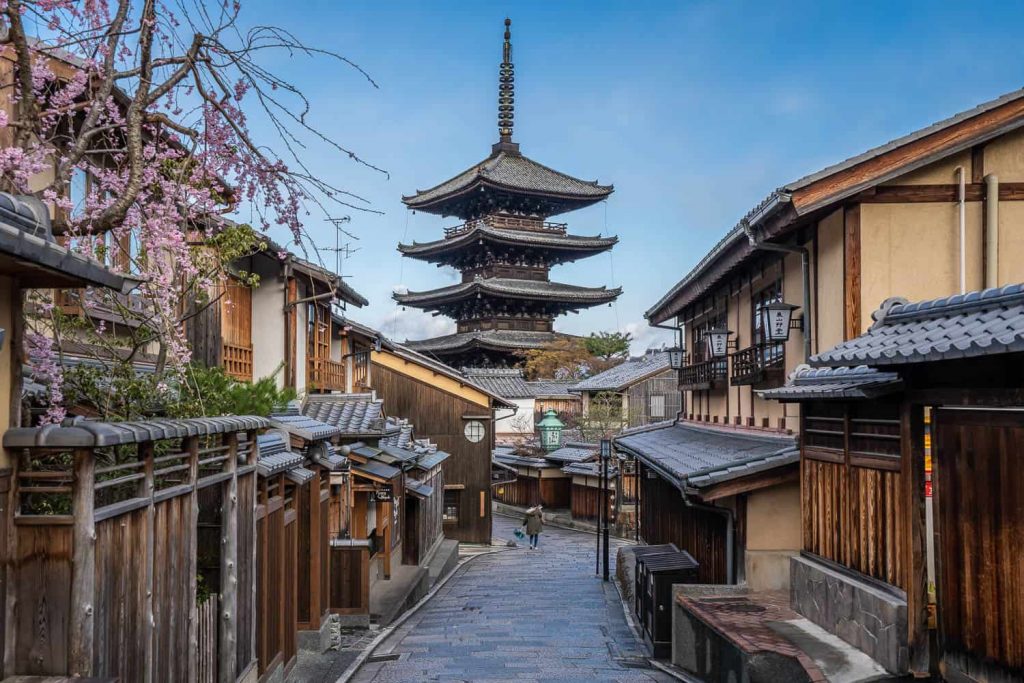 Kyoto is home to a large number of famous Buddhist shrines and imperial palaces, which is why it’s hard to find and tell about one that’s not well known. Kyoto city itself is ancient, more than a thousand years it was the capital of the country and the main residence of the Emperors, at the moment it is considered one of the largest cities in Japan . Over the years Kyoto has been destroyed several times in wars and almost completely burned in a fire, but fortunately many temples and shrines have survived. One of them is Kuramakibunecho . It is quite popular with the locals – according to legend, if you stand on this spot for a while, any wish you make will come true.

17 the most photogenic temples of Southeast Asia, which is impossible to look at 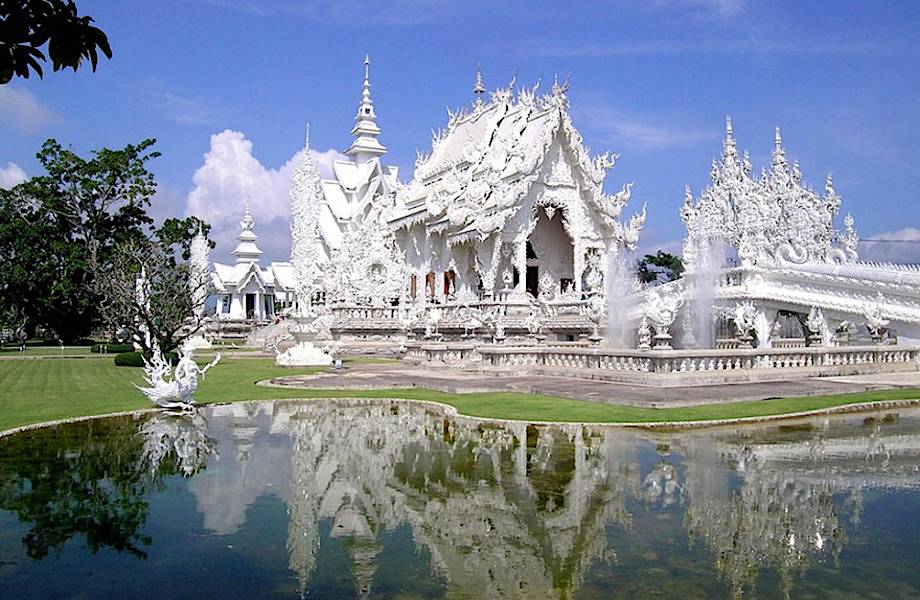 Southeast Asia is a region of 11 countries located on the continental and island territories between China, India and Australia. Everyone goes there with a purpose: to sunbathe on tropical beaches, enjoy the wonderful nature, touch thousands of years old cultures. Southeast Asia is especially popular due to the fact that on its territory is a truly extraordinary collection of ancient values and cultural heritage. Thousands of temples of all kinds and religions can be found literally at every turn. The most magnificent and photogenic of them we present in our list! 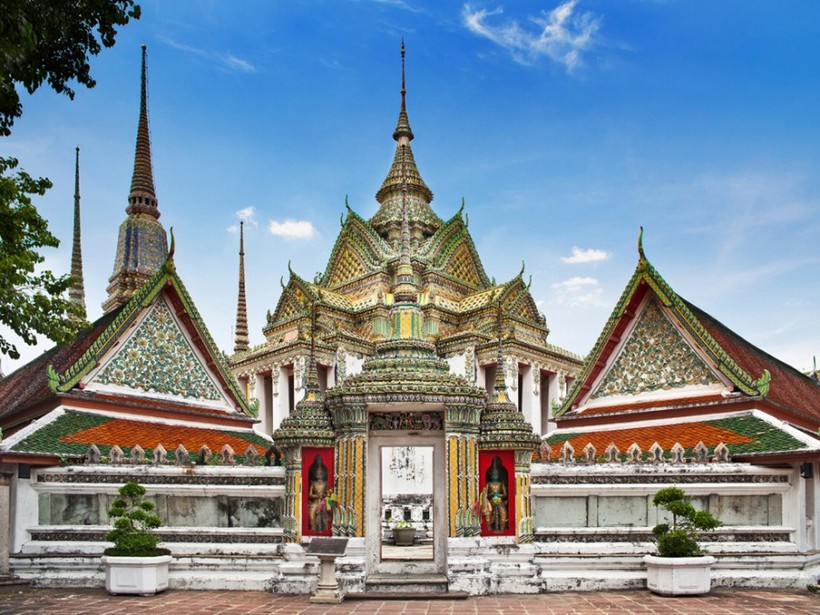 A Buddhist temple in the Phra Nakhon district of Bangkok. Wat Pho is called the home of the reclining Buddha (15 meters high and 43 meters long). At the temple was founded University, which became Thailand’s first public institution of higher education. It is believed that in Wat Pho originated the traditional Thai massage. 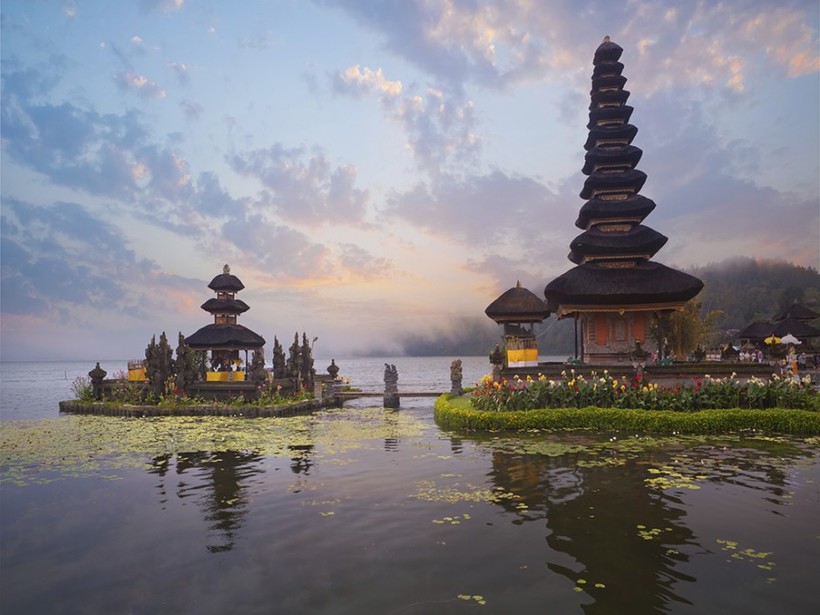 Pura Ulun Danu Bratan is a water complex on the shores of Lake Bratan. The temple was built in 1663 and is now used for ceremonies in honor of Devi Danu, the water goddess of the Balinese Hindus, who bestows prosperity and well-being. 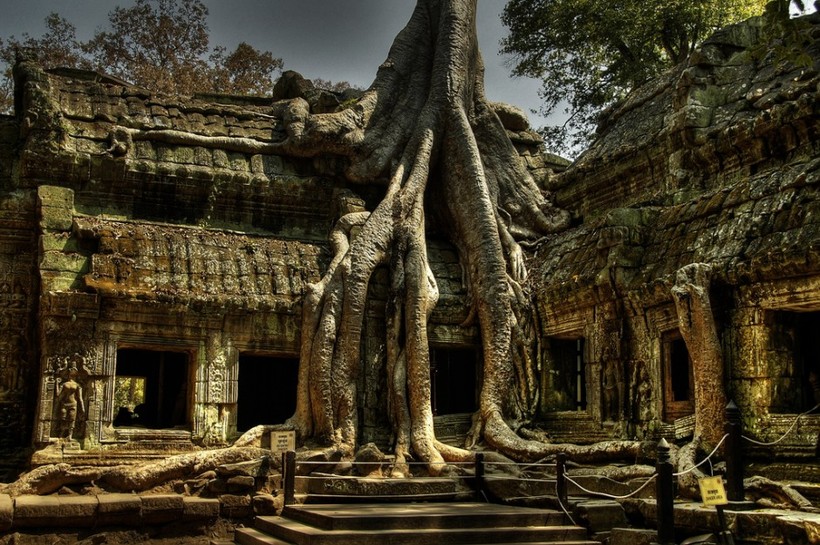 Famous for the making of the movie Tomb Raider, the temple was built at the end of the 12th and beginning of the 13th century. The main feature is the presence of vegetation on the grounds, as if the temple was not completely reclaimed from the jungle. Massive trees grow everywhere, merging with the walls and towers, hugging the stones with giant branches and roots. 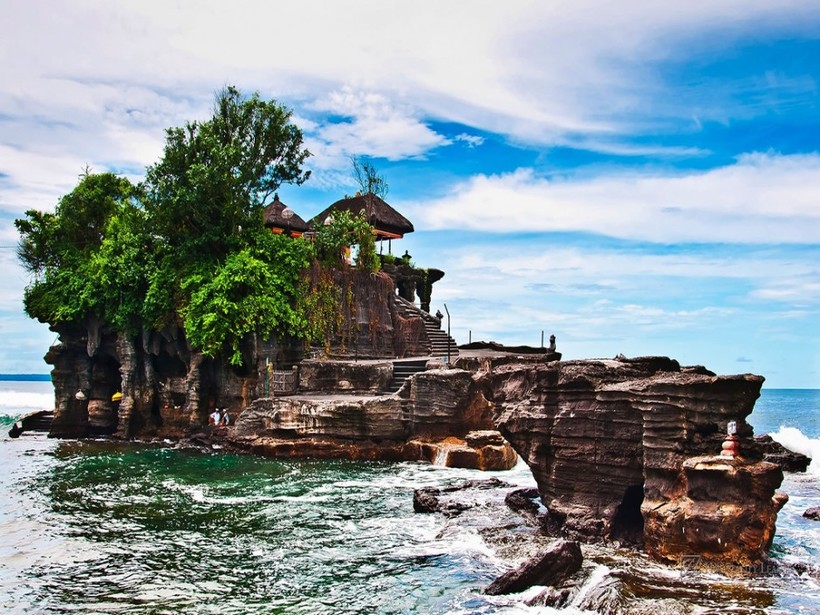 Tanah Lot is one of Bali’s seven sea temples, perched on a rock and connected to land by a narrow isthmus that can only be crossed at low tide. It is a must-see during your trip. 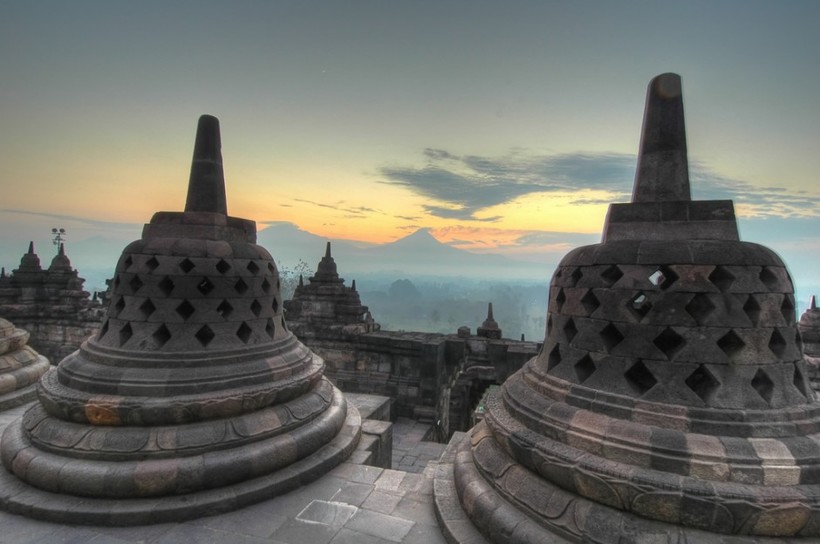 Borobudur was built in the 9th century and is the largest Buddhist temple in the world. This huge stupa consists of square platforms, eight tiers and is topped by five hundred Buddha statues. Borobudur is still a place of pilgrimage and prayer. Pilgrims walk seven times clockwise on each level. Touching each Buddha from the stupas on the upper tier is believed to bring happiness. 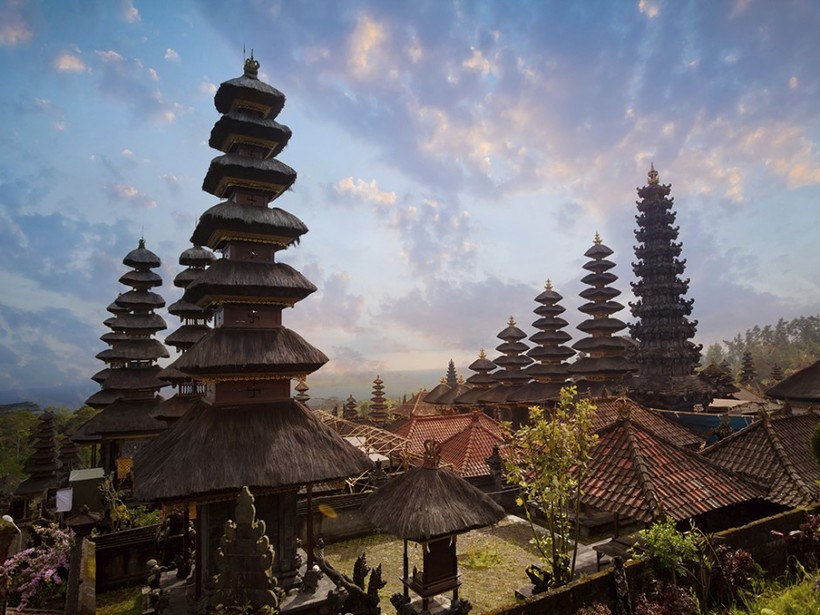 Also known as the Temple of Mother Besakih, it is a complex of 22 temples. However, in 1963, after the eruption of the volcano Mount Agung was partially destroyed by lava flows. 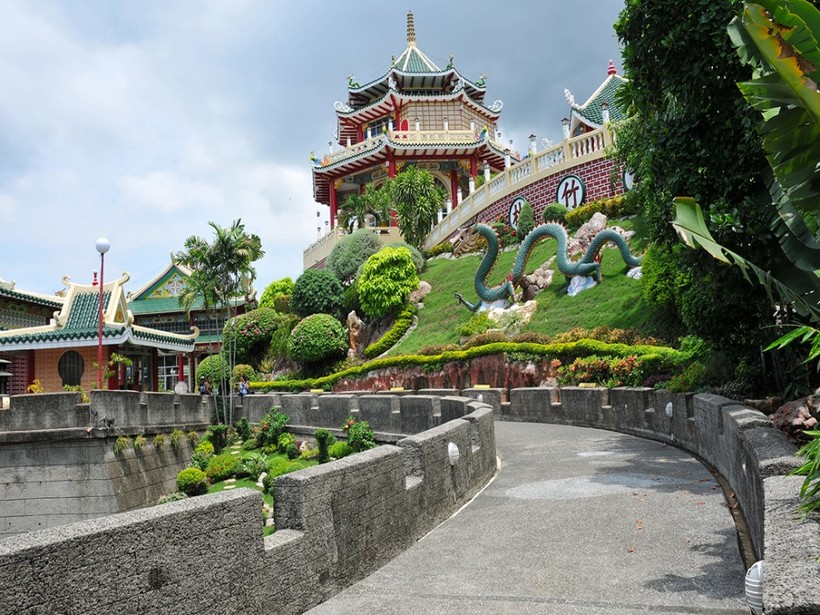 Taoist Temple in Cebu is located on a hilltop 300 meters above sea level. The path to the temple is an exact replica of the Great Wall of China. This place for worshiping the gods was built by the Chinese community of Cebu. 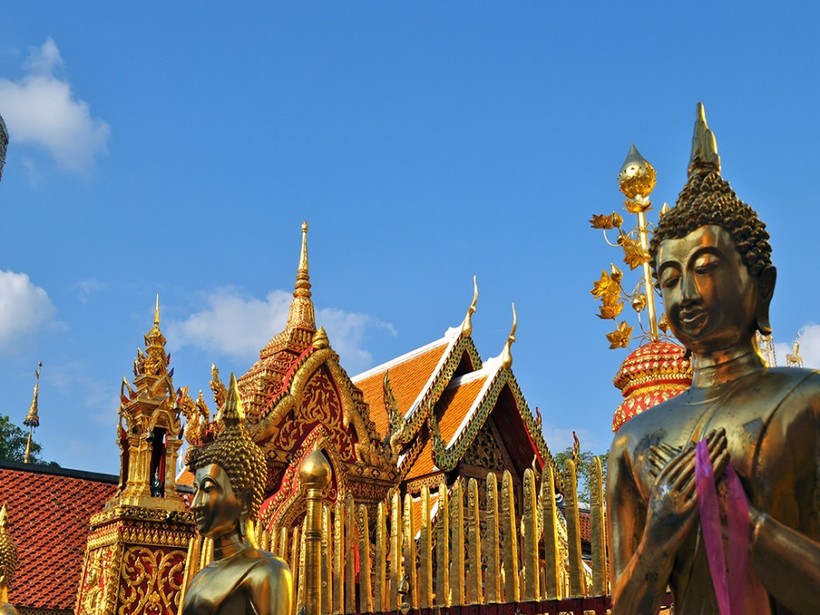 Located at the top of Doi Suthep Mountain, this temple offers a beautiful view of the city. This place often suffers from an influx of tourists and is considered a must-see for pilgrims. The Temple and Museum of Buddha’s Tooth was built between 2005 and 2007 in the traditional Chinese style of the Tang dynasty. It houses a tooth found in a ruined stupa in Myanmar, which, according to legend, belongs to the Buddha himself. In the basement of the temple is a cozy canteen, where everyone can enjoy vegetarian meals. 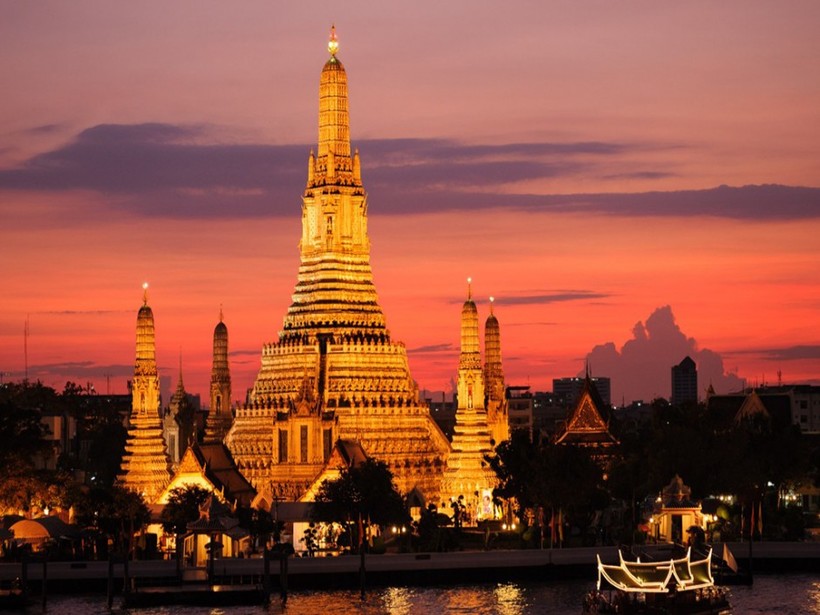 Wat Arun is short for Wat Arun Ratchavararam Ratchavaramahavihan. It rises on the west bank of the Chao Phraya River, where you can see the spires of this temple by boat. 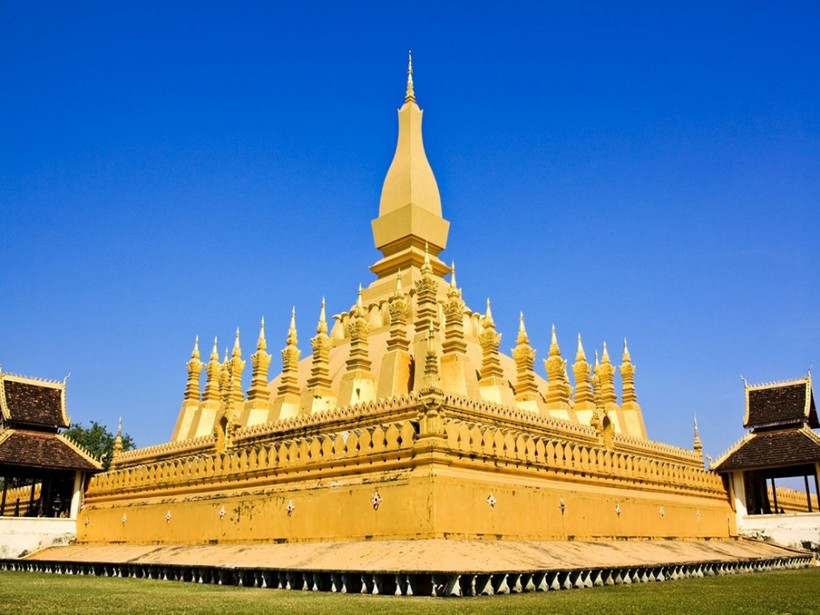 Pha Thatluang is considered the most important architectural monument and symbol of Laos. It reaches 45 meters in height. 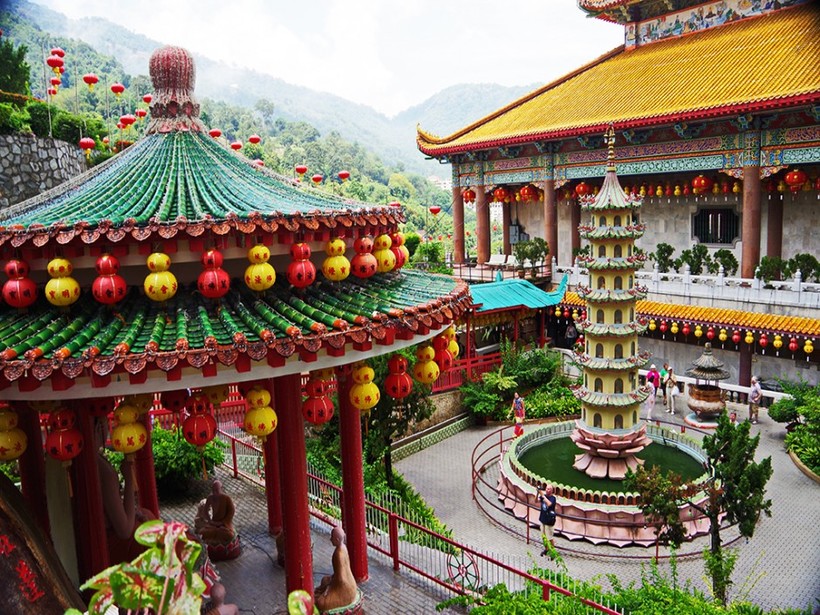 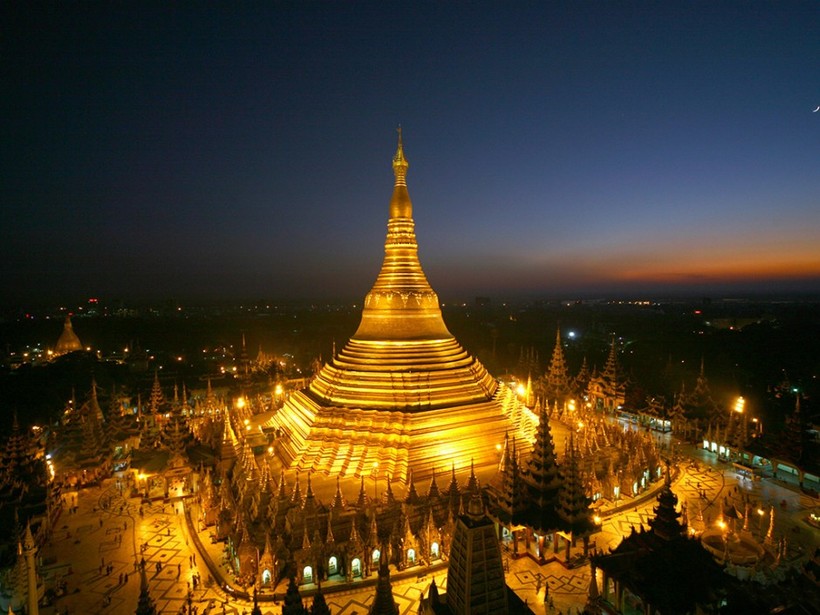 One of the most popular tourist attractions in Myanmar is the Shwedagon Pagoda, which houses the relics of the four Buddhas. 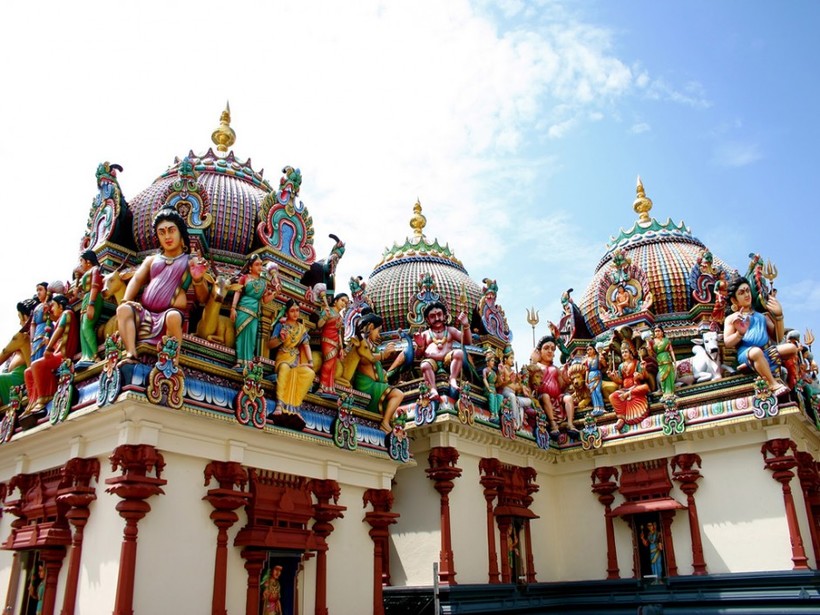 The oldest Hindu temple in Singapore is a national monument. All of its six tiers are decorated with colorful plaster sculptures of Hindu deities. According to tradition, the temple is consecrated every 12 years. 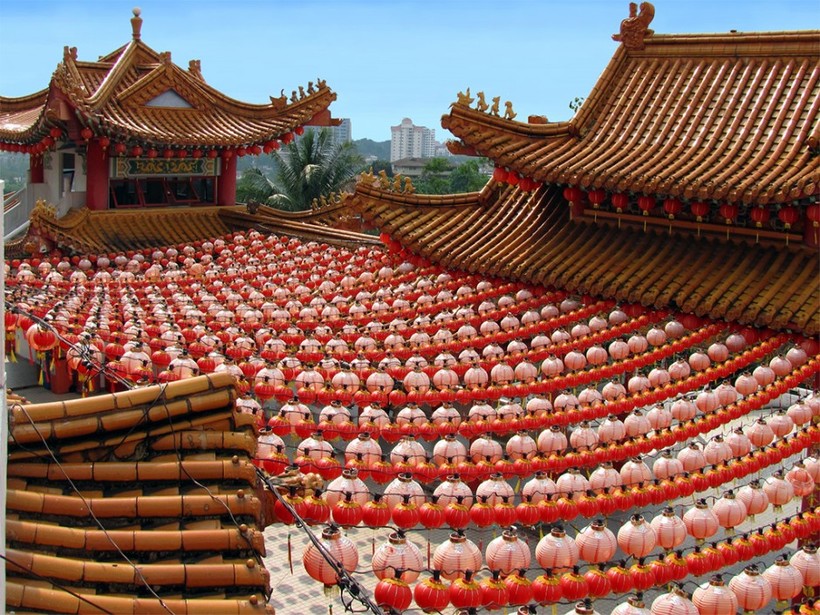 The temple in Kuala Lumpur is dedicated to the goddess Mazzu. There are six levels, which took six years and approximately 7 million ringgit to build. It was officially opened on September 3, 1989. 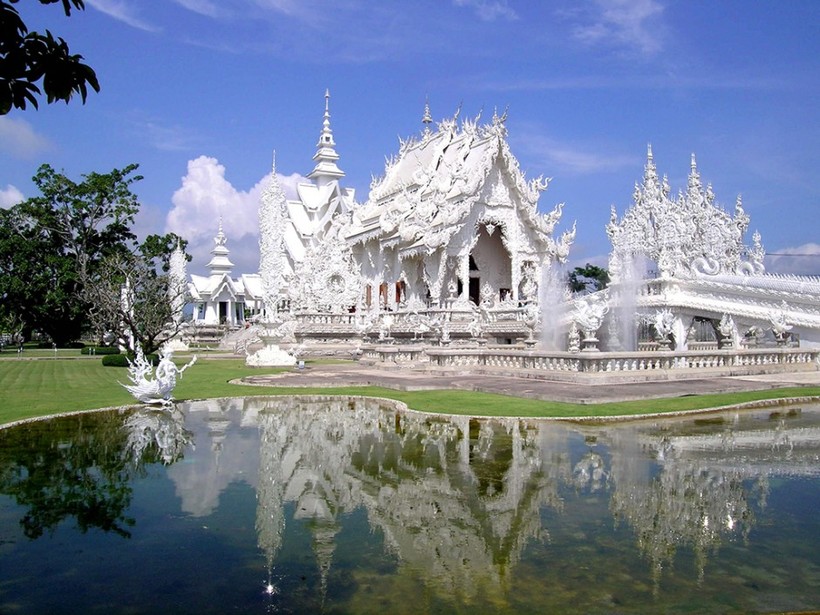 Also known among foreigners as the White Temple. Wat Rong Khun is designed in a non-traditional Buddhist manner and was built in 1997 by Thai artist Chalermchai Kositpipat. The temple was badly damaged by an earthquake in 2014, but it is promised to be reconstructed in a couple of years. Angkor Wat is located near the city of Siem Reap and is one of the largest religious monuments in the world. The temple complex was originally dedicated to the god Vishnu. The structure and the external appearance of the temple symbolizes the mythical sacred mountain of Meru, repeating its contours, respectively, the towers of the temple are its top, the walls – the rocks and the moat – the ocean surrounding the center of the universe. In the 1970s Angkor Wat was looted by Pol Pot’s soldiers and since 1992 the ancient city has been under UNESCO auspices, so vandals no longer disturb the peace of the ancient ruins.