Bilbao (Spain) – the most detailed information about the city with photos. The main sights of Bilbao with descriptions, guides and maps.

Bilbao is a city in northern Spain, the capital of the autonomy Basque Country. It is located near the Bay of Biscay and is surrounded by a fertile landscape of forests, mountains and beaches. Bilbao is the pulsating heart of northern Spain, a major industrial center and industrial port. The city does not shine with ancient architecture and ancient sights, but makes up for these shortcomings with museums and delicious cuisine. The most popular tourist attraction in Bilbao is the Museum of Modern Art, with its innovative modern architecture and extensive collections of famous artists.

What to do (Bilbao): 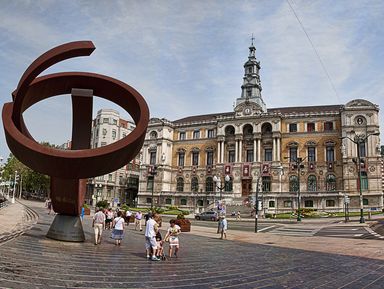 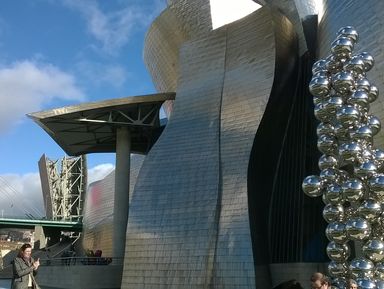 Ancient spirit and marvelous innovations – explore the modern and historic parts of the city.

Bilbao is located at the mouth of the river Nervión, which flows into the Bay of Biscay, which is part of the Atlantic Ocean. The city lies in a comfortable valley at the junction of the Pyrenees and Cantabrian mountains. The climate is temperate oceanic. The proximity of the Atlantic Ocean contributes to a mild climate. The average summer temperature is 25-26 degrees. The heat above +35 degrees is observed rarely. In winter, the average temperature ranges from 5 to 7 degrees. Precipitation is distributed fairly evenly throughout the year. 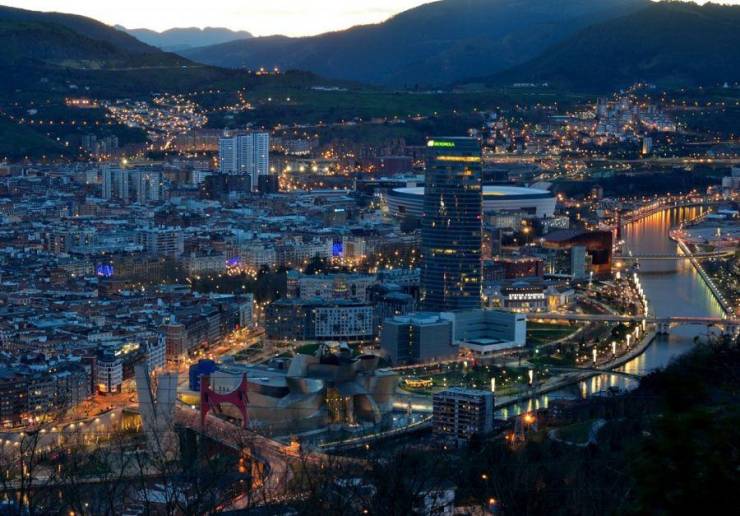 Bilbao was once a fisherman’s village, the site of the current city. Bilbao was founded in 1300 by the ruler of Biscay. The new city received wide privileges and quickly became one of the most important trading centers of the northern part of the Iberian Peninsula. The closest trade links were with the ports of Flanders and Great Britain.

In 1602, Bilbao became the capital of Biscayne. Throughout its history it has hardly been affected by intra-Spanish conflicts. Bilbao suffered much more from wars with France. In 1835 the city was besieged by the Carlists, but it fought them off.

Bilbao Airport is located near the city. It is served by most major European carriers. The Bizkaibus A3247, which departs every half hour from the arrival hall, can be taken to the city center. On the way it makes three stops: Gran Via Viajes Ecuador, Plaza Moyua and Almeda Recalde.

Bilbao has good bus and train connections to most major cities in Spain and the autonomy, including Madrid and Barcelona. Getting to Bilbao by bus is often cheaper than by train. In this case, bus service is more regular.

Public transport in the city is represented by the metro, commuter trains and buses. Bilbao metro has two lines.

Bilbao can offer a good shopping experience. One of the main shopping areas of the city is the Gran Vía. Here are a variety of establishments and stores, banks, supermarkets and souvenir shops. Another popular shopping area is Casco Viejo, the historical center of the city. Bilbao’s largest market, La Ribera, is located on the waterfront. In the Guggenheim Square area there are many stores with antiques, books and souvenirs.

Bilbao is famous for its cuisine. Traditional Basque cuisine has a seasonal character, paying great attention to the freshness and quality of ingredients. Tapas are called Pintxos here. Bilbao gastronomy is part of Basque cuisine, but it has its own characteristics. Only here do bollo de mantequilla (bun with butter) and carolina pie. Popular dishes include pisto a la bilbaina (onion, pepper, zucchini, tomatoes, and ham cut into small pieces), Ranero Club cod (cod in wine), roasted vegetables with meat and eggs, porrusalda (stewed meat). Thanks to its location (practically on the oceanfront), you can try many dishes from the freshest seafood.

Casco Viejo (Old Quarter) is one of the most atmospheric areas of the city. Located on the right bank of the river Nervión. 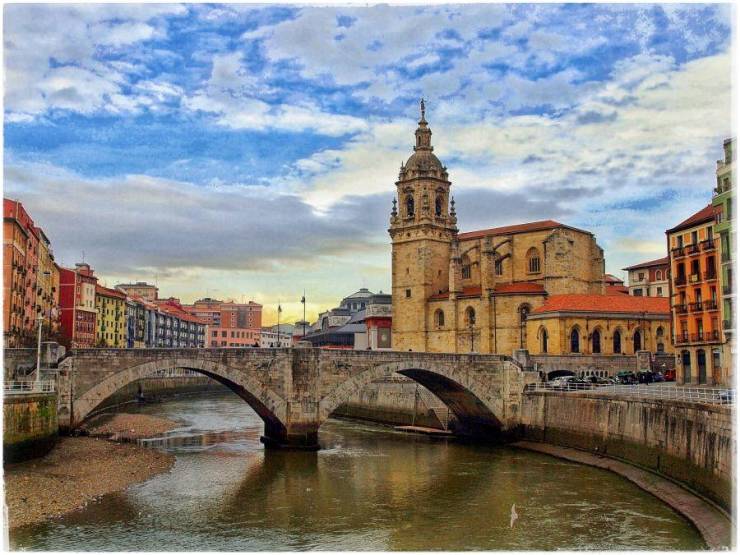 The heart of the old quarter used to be surrounded by walls and consisted of three parallel streets. Later, the walls were torn down and four streets perpendicular to the river were built, which together with the first three make up the oldest part of the city. In the northern part of the historic center is Arenal Street, which is the main thoroughfare. The Plaza de Arriaga is home to an elegant late 19th-century neo-baroque theater. 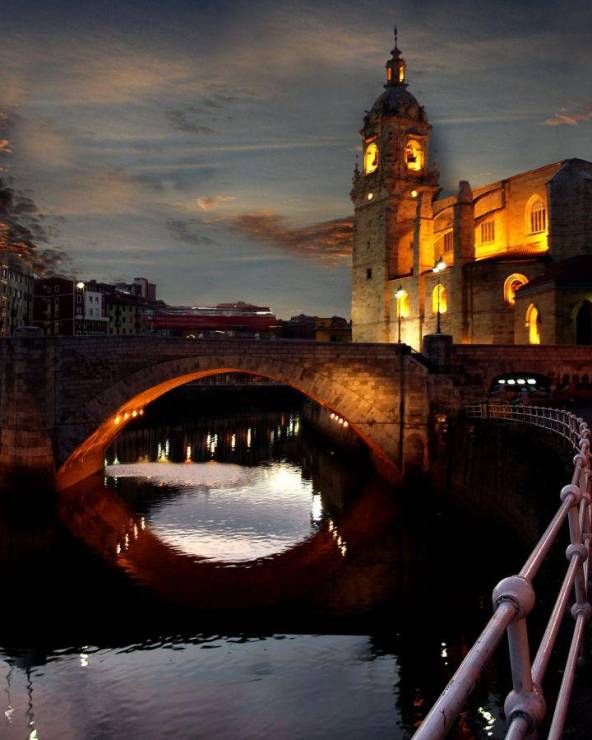 Not far from La Ribera Market and the former City Hall is one of Bilbao’s main attractions, the Church of San Antón and the bridge of the same name. The church was built in the Gothic style between 1546 and 1548, although its beautiful façade is Renaissance in style and the bell tower is Baroque. Inside are interesting works by Luis Paret, Manuel Lozada, and Guiot de Bogrant. Almost three hundred years before the first church was built on this site, there was a warehouse built on a rock next to a ford where caravans loaded with wool from Castile crossed the river. In the 14th century the first city fortifications were built here, fragments of which can still be seen today. 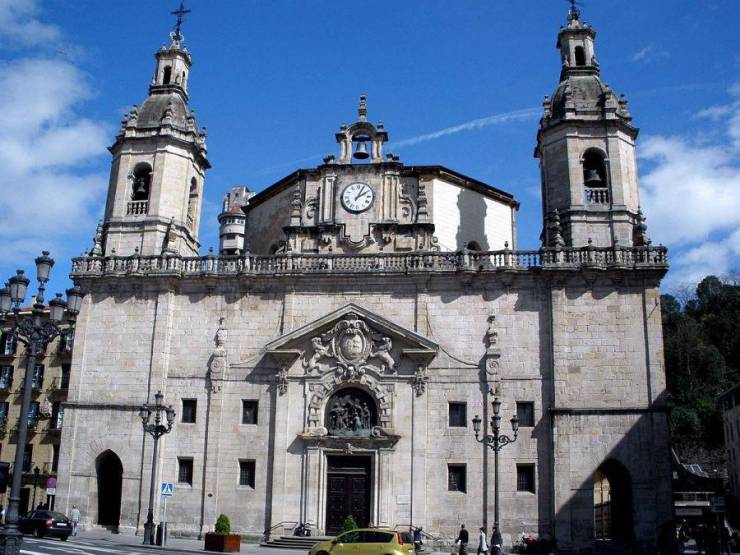 The Church of St. Nicholas is a beautiful church with a Baroque façade and a unique interior. Its foundation dates from the 14th century, but the building was completely rebuilt in 1756. The beautifully carved altar and some of the paintings are by Juan de Mena. To the south is Plaza Nueva, with elegant arcaded buildings and many restaurants and cafes with outdoor terraces. 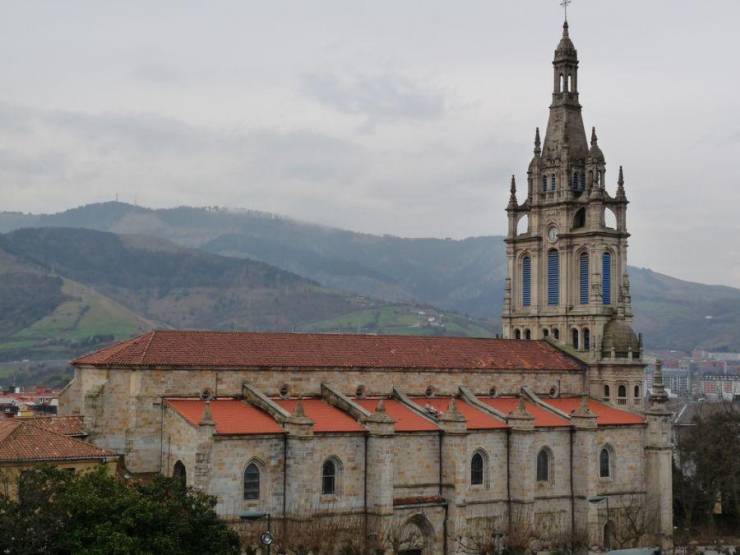 The Basilica de Begonia is one of Bilbao’s most emblematic churches. It is located on a picturesque hill above the old town. The building dates back to the 16th century and contains an image of Our Lady of Begonia, the patroness of Bilbao. The easiest way to get to the basilica is by elevator from St. Nicholas Church. The walk up the hill takes about 15 minutes and rewards you with beautiful views of the city. 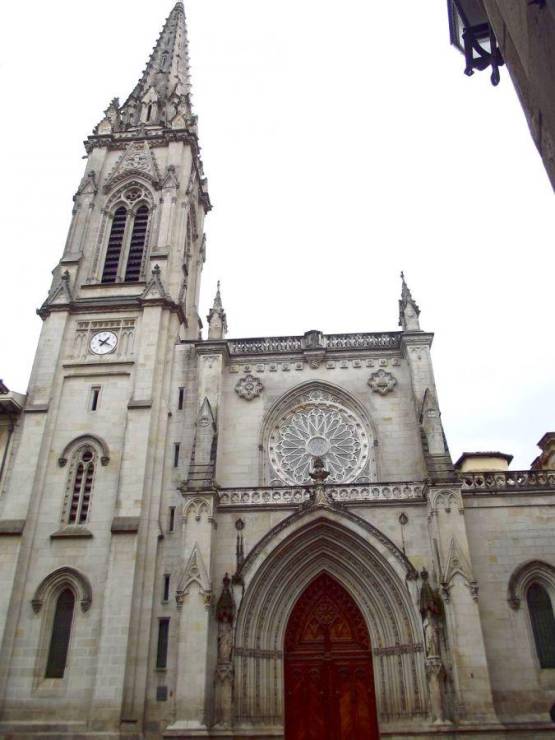 The Cathedral de Santiago is located in the center of the old city. The first church was built in the 14th century. The original building was damaged by fire in 1571 and rebuilt in the 19th century in the neo-Gothic style. The cathedral has a majestic interior with three naves and vaulted ceilings. Particularly beautiful are the choirs with fanciful Gothic details. The crypt includes the remaining structure of the original church. 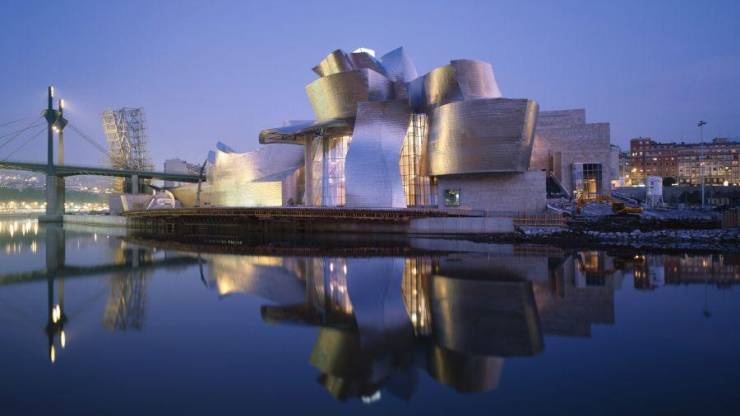 The Guggenheim Museum is Bilbao’s most famous museum, housed in a building that is considered a groundbreaking example of 20th century architecture. The building was designed by architect Frank Gehry and built in 1997. Its 24,000 square meters of exhibition space includes world-class contemporary art collections. Major masterpieces include abstract works by Mark Rothko, paintings by Willem de Kooning, Anselm Kiefer, Francesco Clemente, Jim Dean and many others.

READ
The 17 best sights of Potsdam - descriptions and photos 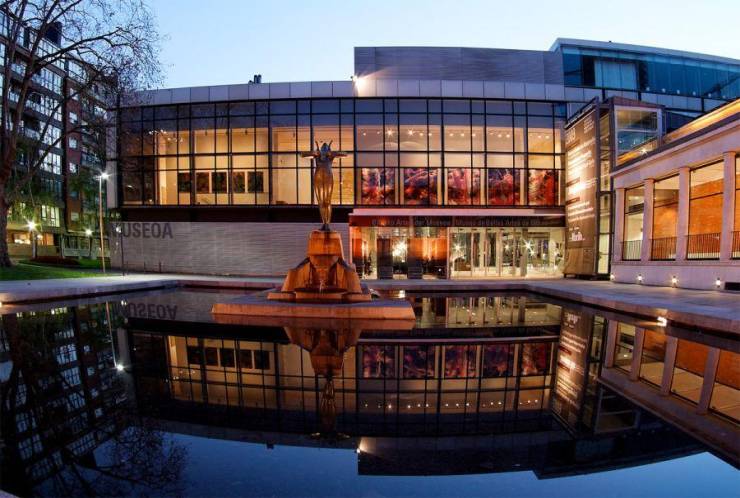 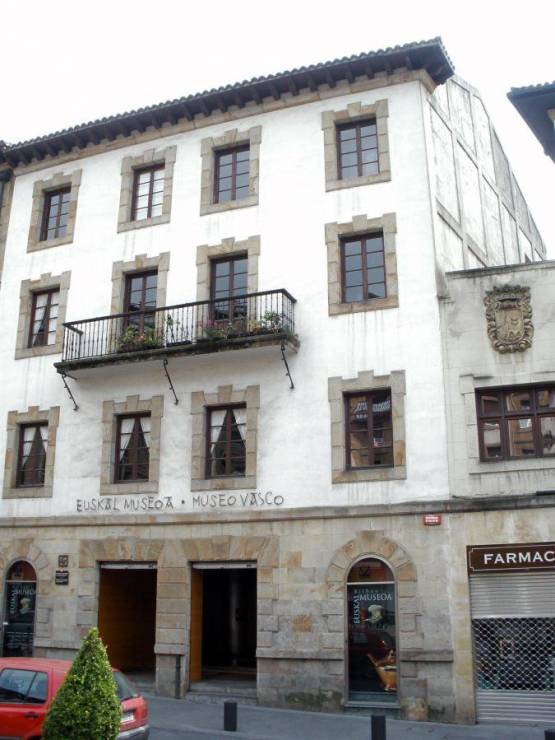 The Museo Vasco is an archaeological museum where you can discover the unique culture and history of the Basque Country. Housed in a beautiful Baroque building in the heart of the old town, the museum offers exhibitions of the departments of archaeology, ethnography and history. 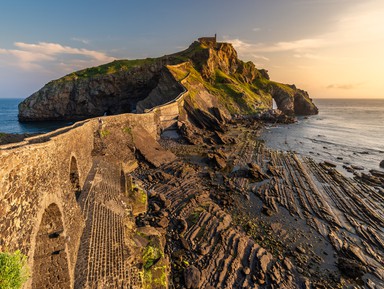 Bilbao is an extraordinary modern city in the Basque Country with many historical attractions. 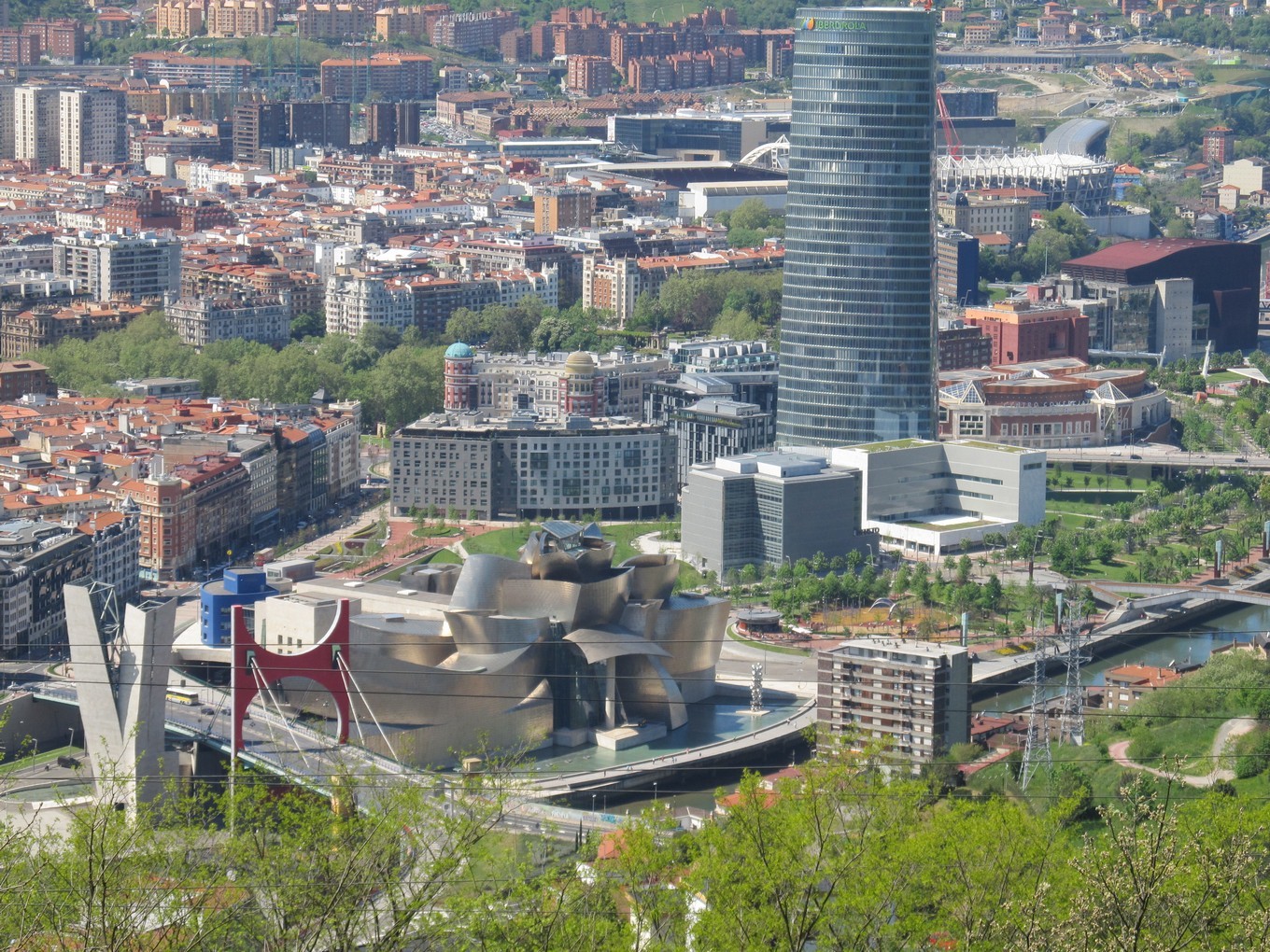 Moyua Square is the center of the new city. The square is named after the politician and mayor of Federico Moyoua Salazar. It has been built up since the end of the 19th century. There are important landmarks here: