WHAT TO SEE IN SPLIT

What to see in Split in 1-2 days? Which Split sights should be visited first? The article will answer all these questions, as well as tips, recommendations and other useful information.

In my opinion, Split, thanks to its large international airport, is an excellent starting point for your trip to Croatia.

+ Useful links for your own travels

In Split you will have a great time at the numerous beaches of the clear sea, and if you want you can also go for a short excursion into the city and explore its history, culture and architecture.

Although Split is a city that is 1800 years old and there are many attractions, but most of them are: churches, monasteries, cathedrals and numerous museums that you get tired of. 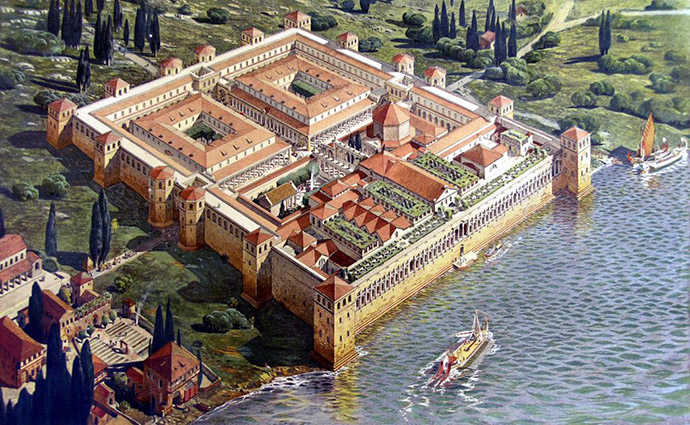 The Split’s calling card is the Palace of Diocletion as it was many centuries ago.

Here I will list the most important sights of Split, in my opinion, which will answer the question: what to see in Split in 1-2 days.

A huge number of religious sites will not enumerate, here they are at every step and as they say: if you want to The choice of accommodation in Split is very important.

If the choice of accommodation in Split is still relevant for you, a useful article about the best hotels in Split by the sea will help to solve this issue.

Split sights on the map

What to see in Split?

If you are planning a trip around the country, the article about all the main sights of Croatia may be of interest to you. 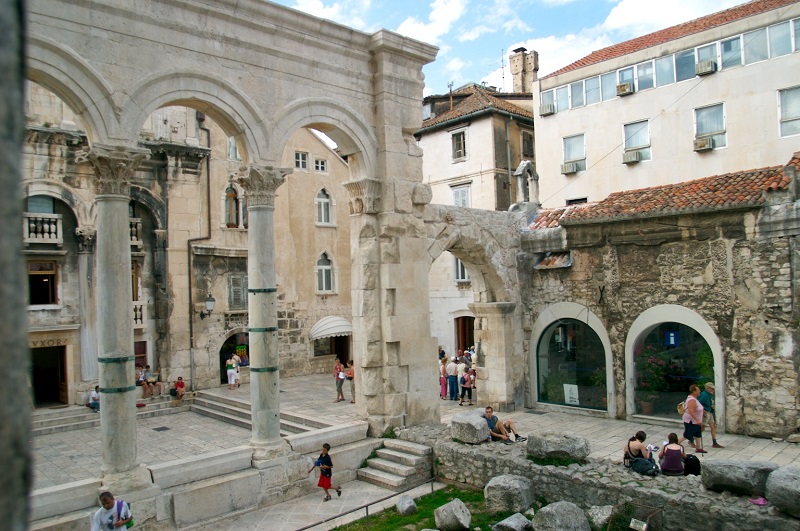 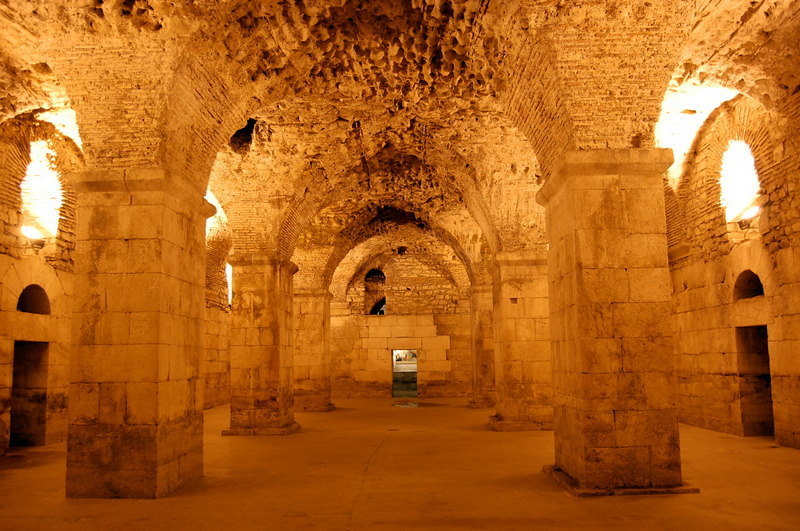 The dungeon where they filmed “Game of Thrones 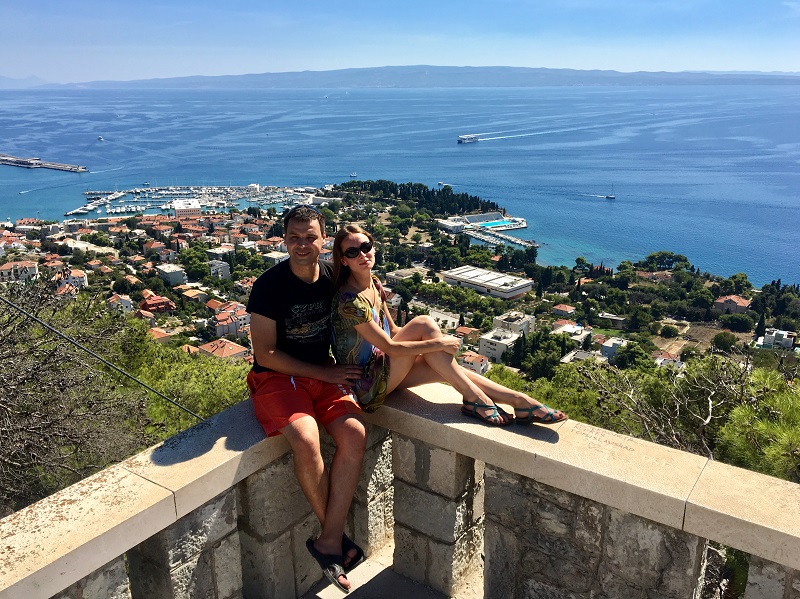 Marjan National Park in Split. The photo was taken from the top of Marjan Park from the observation deck. There is an insanely beautiful view of the entire city and the sea. 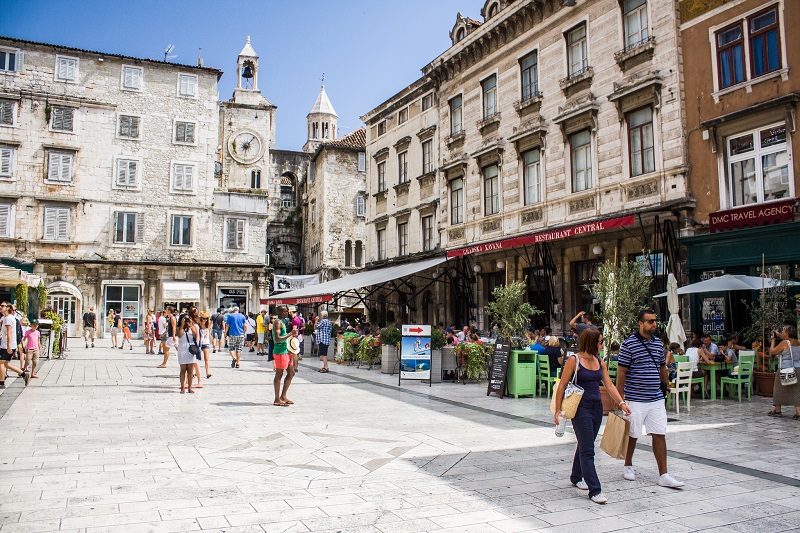 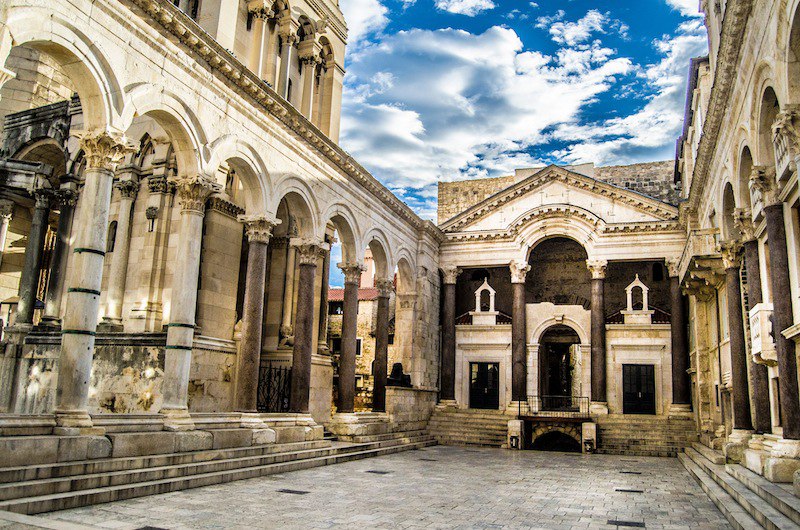 Temple of Jupiter. And outside on these steps you can just sit with a coffee and get a feel for the atmosphere. 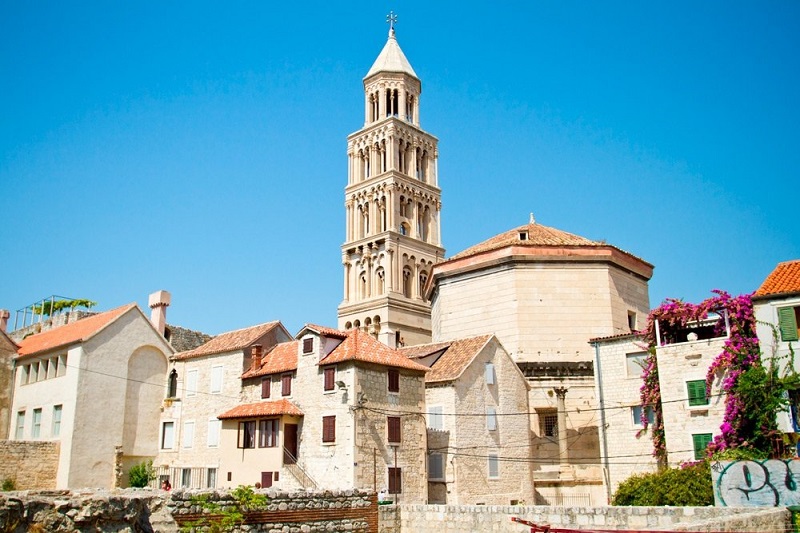 The cathedral and the observation tower of the bell tower, two sights in one photo 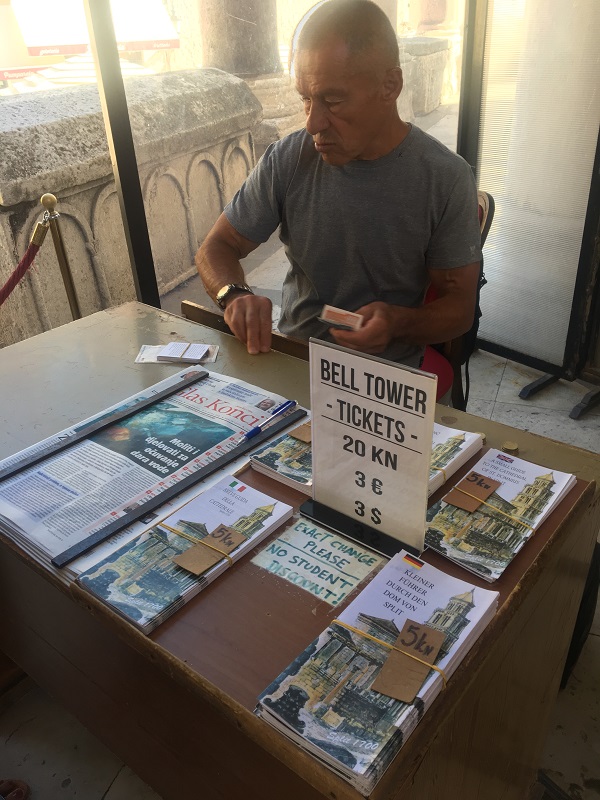 Ticket to the Bell Tower in Split 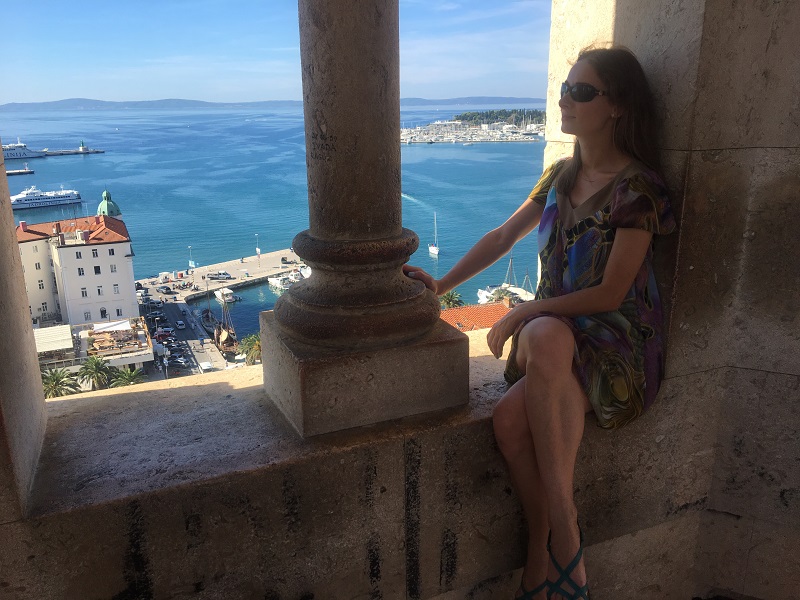 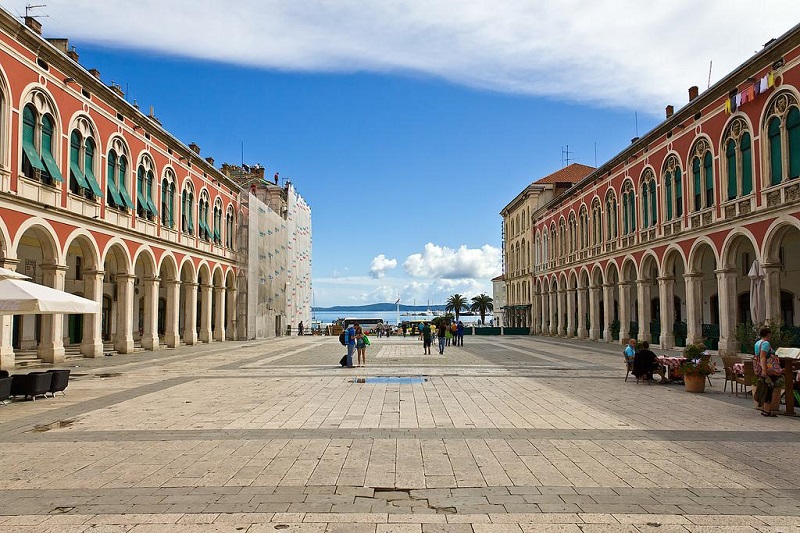 Republic Square in Split. I would live here with this view. 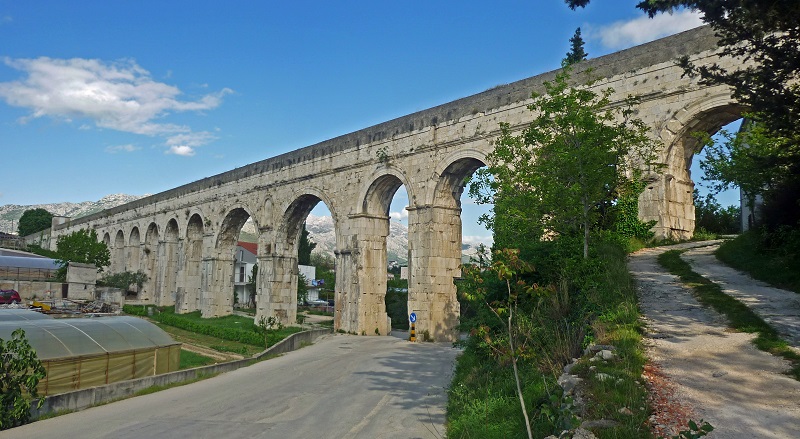 Aqueduct of Diocletion on the outskirts of Split

Split is chic to explore with local guides who know the city like no tourist does. Below is a rating of the most popular excursions in and around Split. I recommend to pay attention to the excursion to the blue cave, the excursion to Trogir and of course the gastronomic tour of the city!

Travelers from Split often take excursions to Sibenik or Makarska.

In conclusion: in the article above, I have listed the main, in my opinion, Split attractions that I was interested to see for myself. I hope after reading this article you do not have a question, what to see in Split in 1-2 days.

If you find inaccuracies – write in the comments.

Important information: below are the resources that will help a lot in organizing a self-trip in Croatia:

This website contains Split attractions – photos, descriptions and traveler tips. The list is based on popular travel guides and presented by type, name and rating. Here you’ll find answers to what to see in Split, where to go, and where to see the most popular and interesting places in Split. Diocletian’s Palace was built 300 years before Christ. Surprisingly, but given its age it is quite well preserved to this day. Today, the palace is located in the Croatian city of Split, and occupies an area of three hectares. In fact, the city of Split grew up around the palace as inhabitants of other cities moved to the palace, seeking protection from the barbarians.

Placed on the very edge of a picturesque bay, Diocletian’s palace had four walls – each with a gate. Through the centuries, fragments of the Golden and Silver Gates, as well as the fully preserved Iron Gate, have survived. The palace’s main attractions are the Imperial Mausoleum and the Temple of Jupiter. Baška Voda is the cutest little town, nestled in the foothills of the Biokovo Mountains. Here are the cleanest, sandy (which is rare for Croatia) beaches, transparent sea and beautiful shores among the pine forest, olive and grape groves and fresh mountain air, thermal springs, a lot of sea attractions, restaurants (deserve attention: Manistra, Buchenica, Zagorska zlevka, Međemurska gibanica) and bars, stores and supermarkets, spa centers and hospitable residents. Baška Voda is one of the coziest towns on the Makarska Riviera.

The first mention of the village dates back to the 18th century. Since those times many buildings and ancient churches have survived here: St. Nicholas (XIX c) and St. Lovro (Baroque). There are also excavations from the 1st-7th century A.D. and an ethnographic museum.

You can pay attention to the port of the city. It has an unusually beautiful ancient architecture and is a jewel of the entire Adriatic coast.

Which Split sights do you like? There are icons next to the photo, by clicking on them you can rate this or that place. Split is a city that is both the economic and administrative center of Middle Dalmatia. It has more than two hundred thousand people. Diocletian, the Emperor of Rome, was one of its first inhabitants. It was he who at the end of the III century built a palace here, the total size of which reaches 30 thousand square meters.

Piazza della Repubblica is a Mediterranean square in the center of the city, near the western fortress walls of Diocletian’s palace. Locals call it the Prokurative. The square has long been considered a venue for many cultural events, one of which is the traditional Split Festival of light music held in the city every year.

In photo mode, you can view the sights in Split by photo only. The Church of St. Dominic is a small, beautiful church, the first mention of which dates back to the 13th century. At that time it was called St. Catherine’s Chapel. The Dominicans used it during the construction of their own monastery in 1217. The chapel became St. Dominic’s Church in the 17th century, when it was almost completely rebuilt. In 1930, the church was expanded and reconstructed.

The church has one single nave. It houses the tomb of the lawyer Giovanni Sobota, who died in 1469. The creation of this tomb is attributed to Nicola of Florence.

Today one can see here the work of Palma the Younger, “The Miracle in Suriana”, and the work “Introduction to the Temple”, which is attributed to the master’s school. The Baroque altars, Gothic crucifixes and wall paintings that have been preserved are of interest. Split Airport is one of the largest airports in Croatia. It is an international airport that serves Croatian cities such as Split, Trogir, Kaštela and others.

Split Airport is the third largest airport in Croatia in terms of the number of passengers accepted.

The airport was opened on November 25, 1966. In 2009, in order to increase the capacity of the airport, the reconstruction was started. It should last until 2014. Airport expansion project includes several stages: ramp expansion, construction of a new terminal, construction of the second runway and others. A bronze image of Bishop Grgur Ninsky is a monument to Bishop Grgur Ninsky, a priest who became famous for his struggle for the democratization of worship, particularly for conducting services in the Slavic language. The monument is located behind one of the gates of Diocletian’s palace, built by the Roman emperor Diocletian, who ruled from 284 to 305 AD.

During the 2nd World War the monument was sawed into 3 parts and buried in the garden near the palace walls, after the war it was restored.

Now it grants the wishes of tourists. One should rub the big toe of the saint and make a wish. They say it will come true. Judging by the fact that the toe of his left foot is shiny, there are many people who are eager to make a wish, which may well mean that wishes do come true. A real “island of adventures” (Adventure Island) in Croatia is Hvar Island. Here you can find a lot of entertainment of all kinds. There is a windsurfing and sailing school for all comers, you can go sailing, or explore the surroundings by bicycle or on foot. Jeep safaris, rock climbing and more. There’s also room for rowdy parties and entertainment shows, bars and restaurants.

And eco-tourism enthusiasts can enjoy the almost unspoiled nature of Moster Bay on fascinating, non-standard excursions.

Here you can take part in everyday life of the island, feel like a fisherman, a farmer .

Would you like to know how well you know the sights of Split? A popular place for recreation and entertainment in Split is the Riva promenade with numerous cafes and restaurants. The famous Bacvice entertainment complex is a 15-minute walk from the city’s waterfront.

The most famous beach in Split, the sandy beach “Bacvice” is located within the city limits next to the entertainment complex of the same name.

The most popular attractions in Split with descriptions and photos for every taste. Choose the best places to visit famous places in Split on our website.

Going on vacation in Split

Interesting cities in the world

Sights of the World