Top 10 most beautiful castles of France

The castles and palaces of France are the best “storytellers” of the rich history of the country. They have seen the lives of kings and courtiers and knights. Many of the former pompous structures are now only ruins, but there are those that have not lost their brilliance and attract tourists with their rich decoration. Rating of the most beautiful French castles and palaces is presented below. 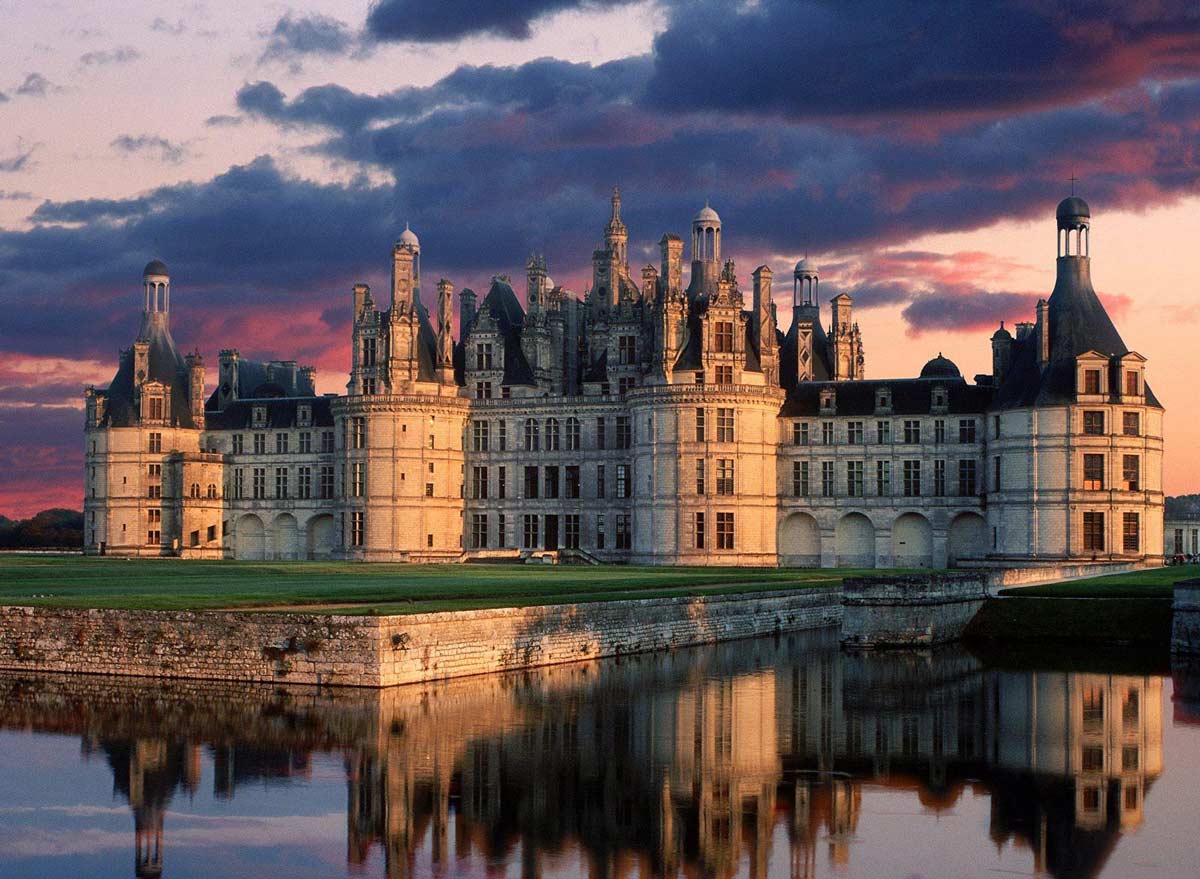 France is extremely rich in castle architecture. Here you can find ancient ruins that once belonged to noble families, and entire castle complexes, lovingly restored and turned into museums. Let’s talk about the top ten most interesting and beautiful castles.

Located on the island of If in the Friulian archipelago in the Mediterranean Sea. 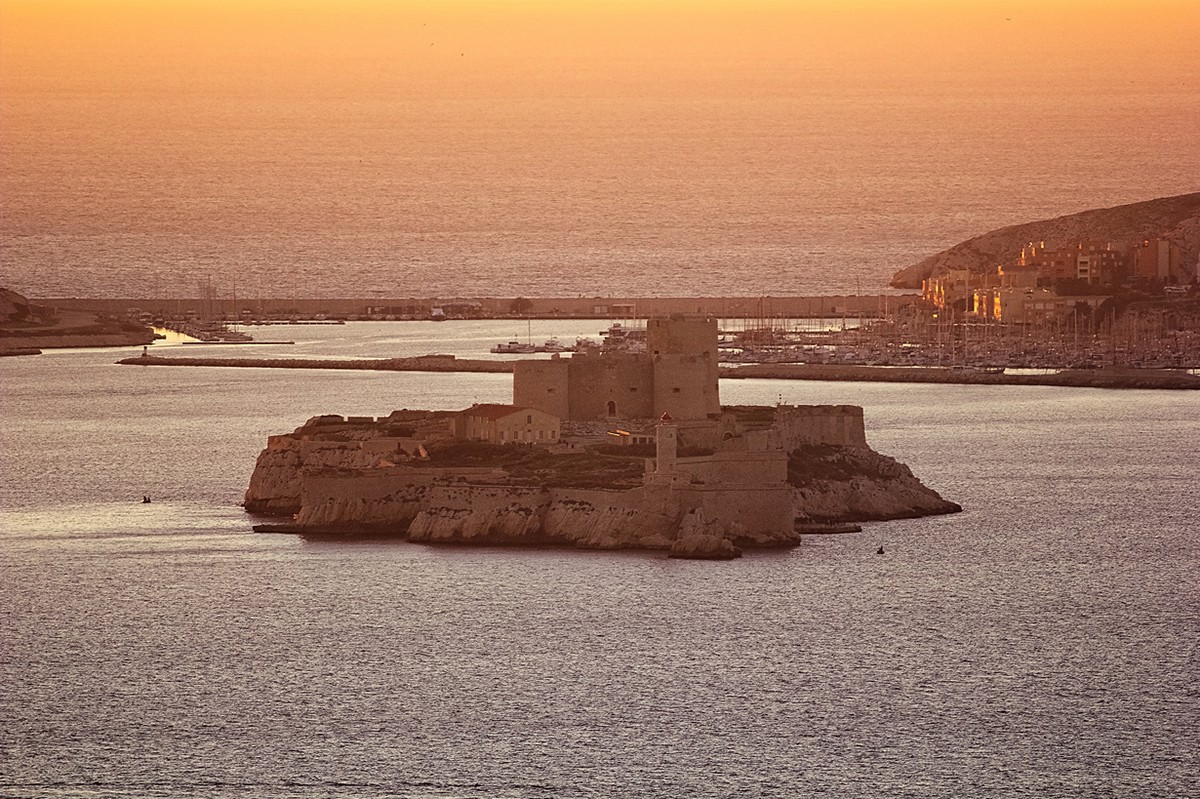 Any fan of Dumas knows about the castle of If, and thanks to numerous film adaptations of “The Count of Monte Cristo” millions of people know what a terrible prison it was. However, according to polls, it turns out that most people think that the castle of If is a fictional place, which in fact never existed. 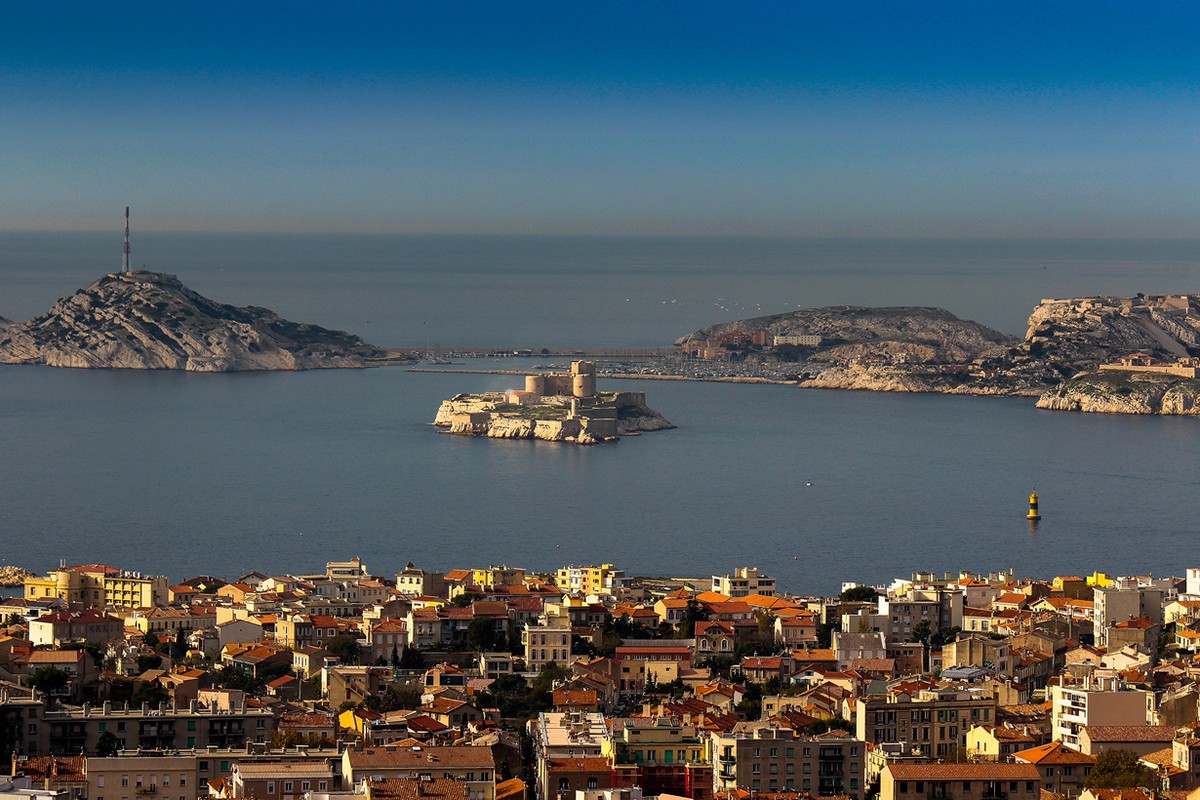 But this castle-prison, which, however, did not become a place of imprisonment at once, is quite a popular attraction of France. The Castle of If is not so far from the coast as it might seem while reading the book or watching the film adaptations, it’s only a mile from Marseille. The local boats will take you there or back almost immediately for ten euros.

Interesting fact: every château in France can be called a château, but not all châteaux are castles. Many of them are country houses of the nobility, and this word is commonly used to refer to wineries in the Bordeaux region.

Located in the suburbs of Melun. 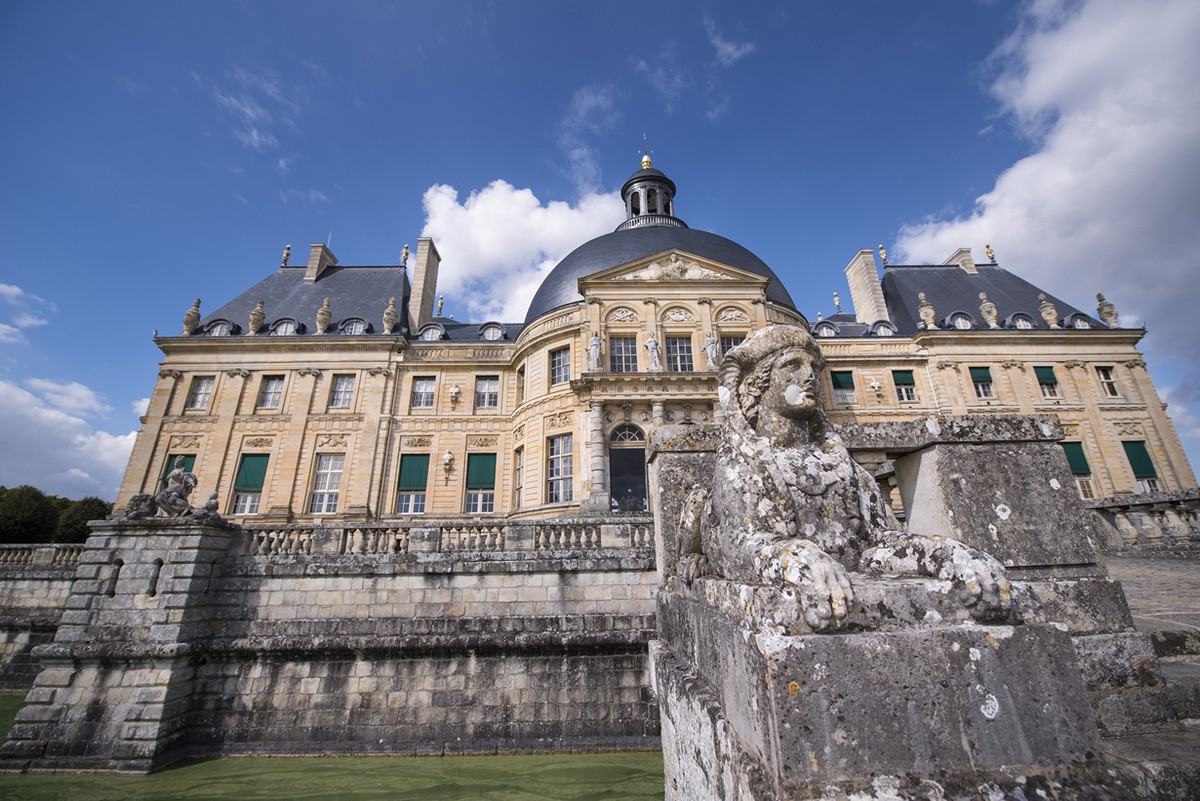 Of all the famous palaces around Paris that you can visit in one day, the Château de Vaux-le-Vicomte, built in classical style, 46 kilometers south-east of Paris, architecturally it looks the most harmonious, aesthetically pleasing and proportionate to man.

The Vaux-le-Vicomte estate was built in 1658-1661 specifically for Nicolas Fouquet, Viscount Vaud and Melun. At the time, he was a favorite of the French King Louis XIV. After receiving the estate, Nicolas Fouquet forgot about it and remembered it only 15 years later, when he took the post of chief financier of France. 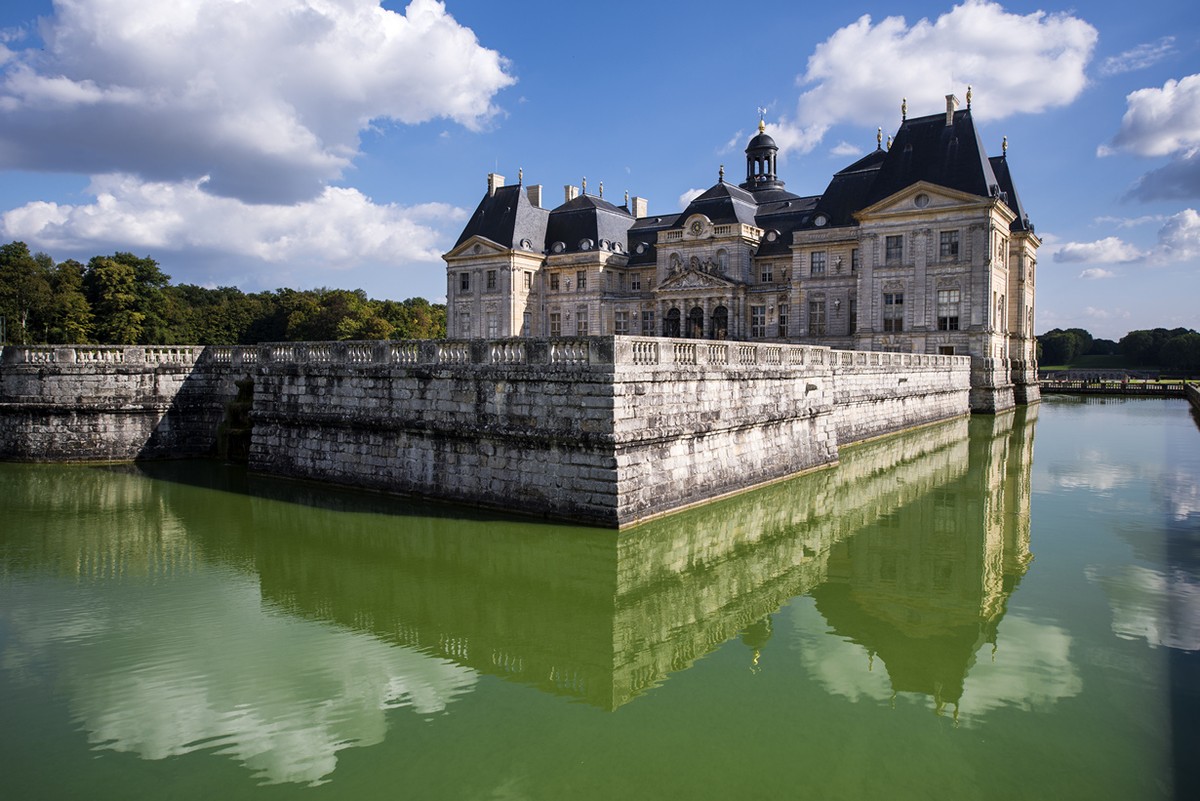 The castle of Vaux-le-Vicomte is filled with beautiful frescoes depicting nymphs and divine creatures, the interior of the castle shines with gilding and abounds in works of art, which the French army ruthlessly exported from all over the world, and the enterprising Fouquet carefully kept in his estate.

Located in the city of Amboise, Department of Endre and Loire. 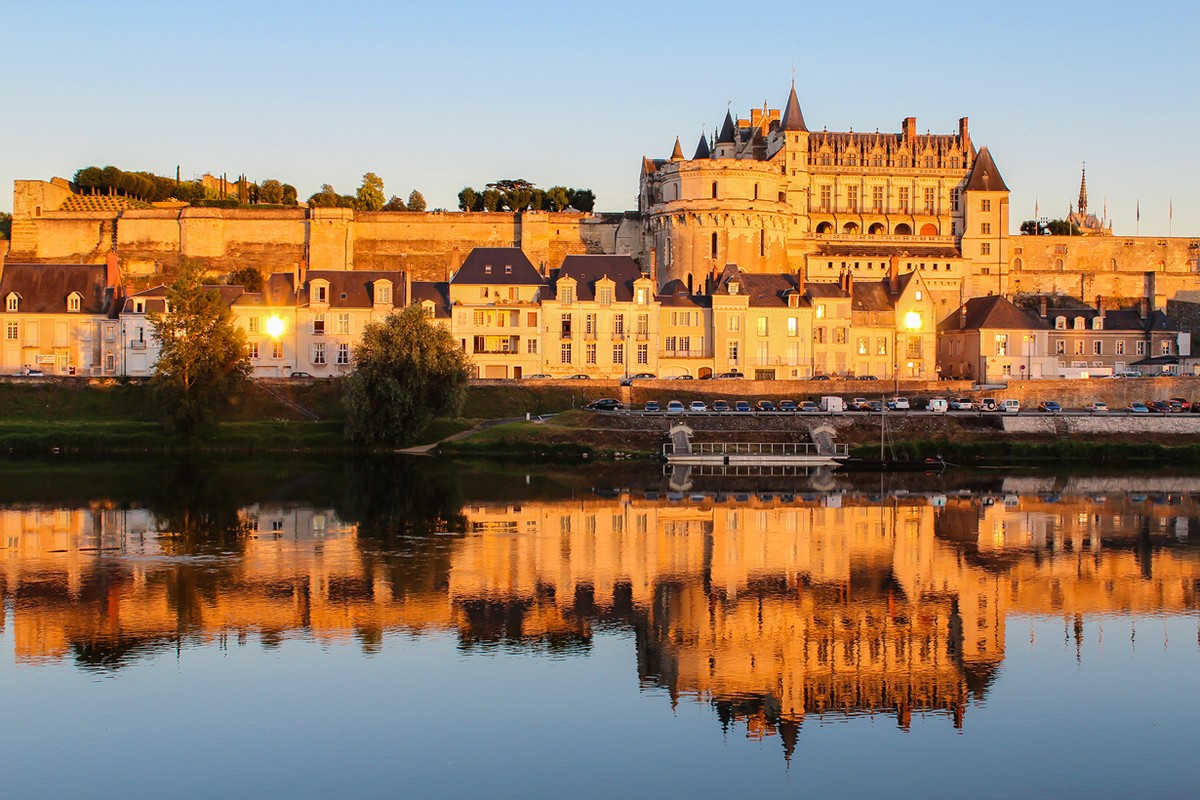 A legendary place in French history and royal residence from the 15th to 19th centuries, Amboise stands on the banks of the Loire and is reflected in its waters. Its medieval fortifications frame a Renaissance structure with cyclopean towers. The former royal residence was declared a UNESCO World Heritage Site in 2000. 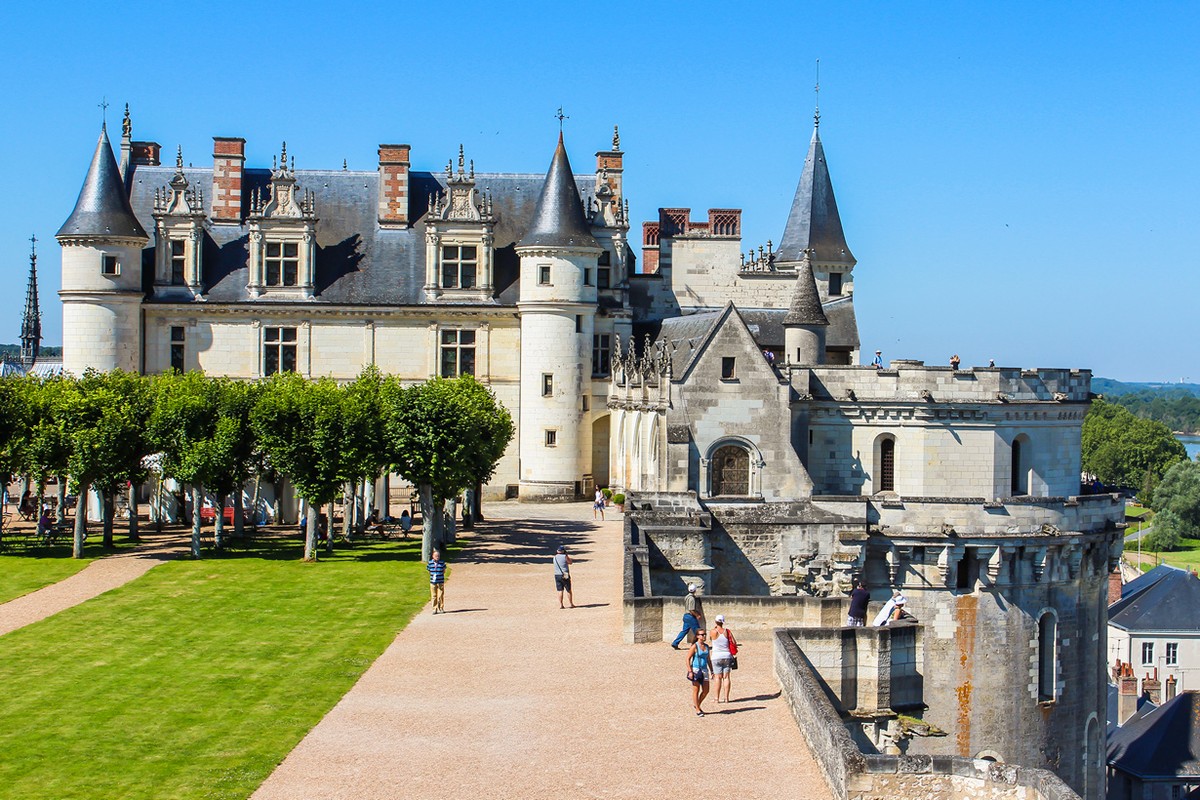 The castle and garden of Amboise are linked to the youth of many French kings: Charles VIII was born here, Francis I and the children of Henry II and Catherine de Medici spent their entire childhood here. Many artists have come here at the invitation of their sovereigns. Leonardo da Vinci, for example, lived at Amboise and held royal feasts here until his death in 1519. His remains are now preserved in the chapel of Saint-Hubert in the castle grounds.

7th place. The Château of Azay-le-Rideau

Located in the department of Endre and Loire. 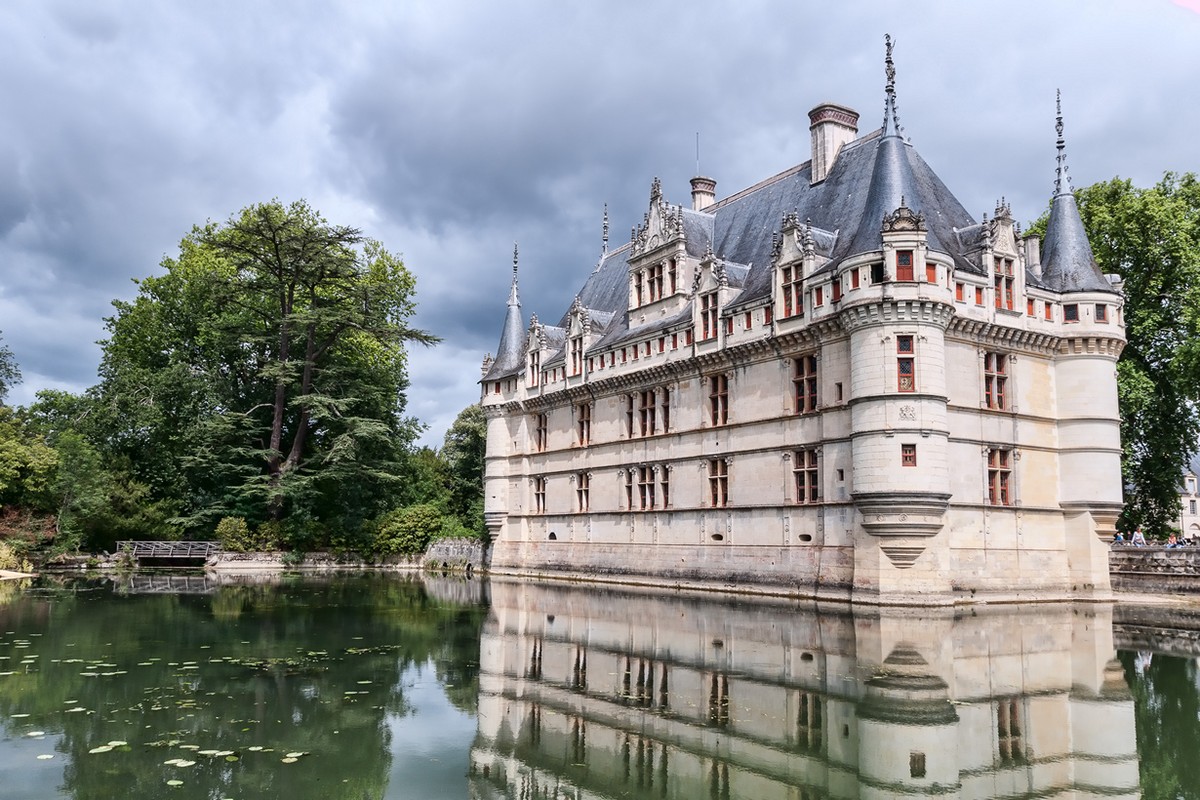 Surrounded by an English park, it belongs to a select number of Loire castles. The Château of Azay-le-Rideau was built by the Treasurer of Francis I in 1510 and is considered a masterpiece of the French Renaissance. Some of the ruined parts of the castle were carefully restored.

READ
What to take with you on holiday 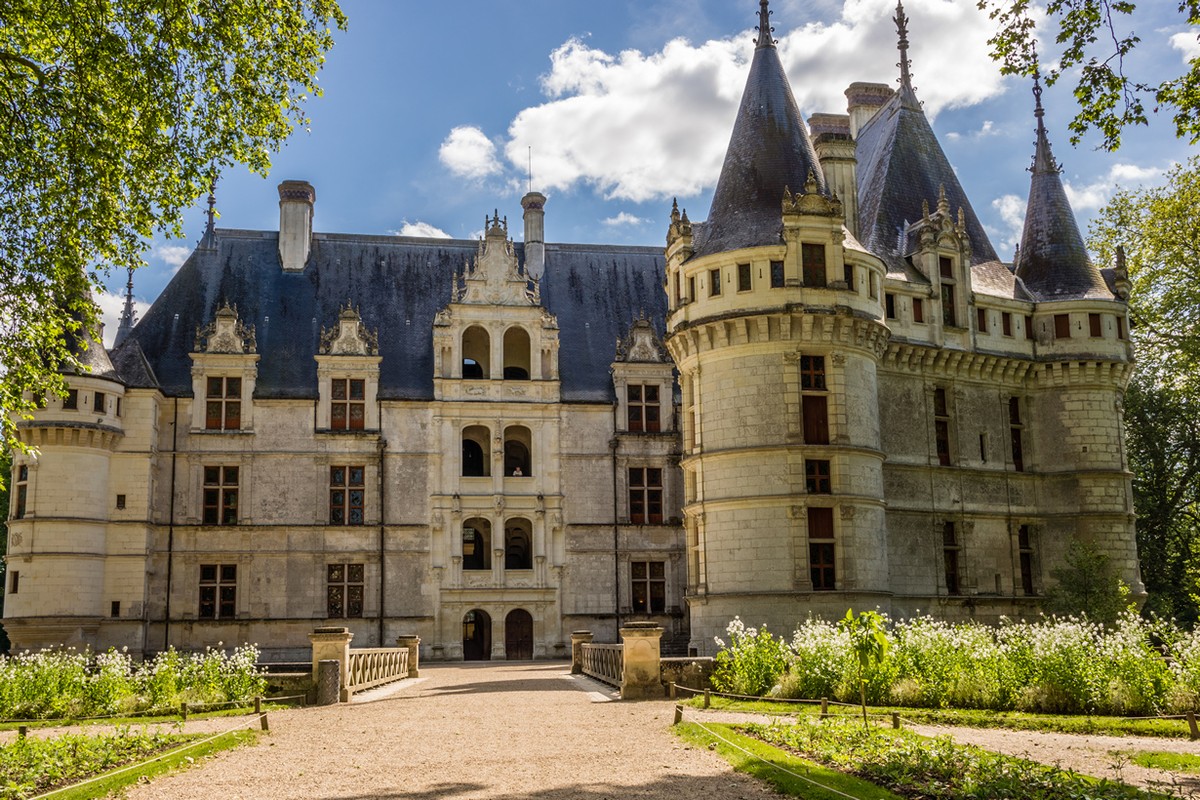 The Château of Azay-le-Rideau towers over the picturesque bend of the Endre River. The name “Azé” probably comes from Asiacus, the name of the owner of these lands. In the 12th century, the castle belonged to Rido or Riedel d’Azeu, who was known for his cruel temper and had the nickname “the devil’s child”. All his possessions were seized by Henry II Plantagenet, but Philip Augustus returned them to Rideau’s son, Hugo, a knight of Tours, a loyal vassal of the king who took part in the Battle of Bouvigne. 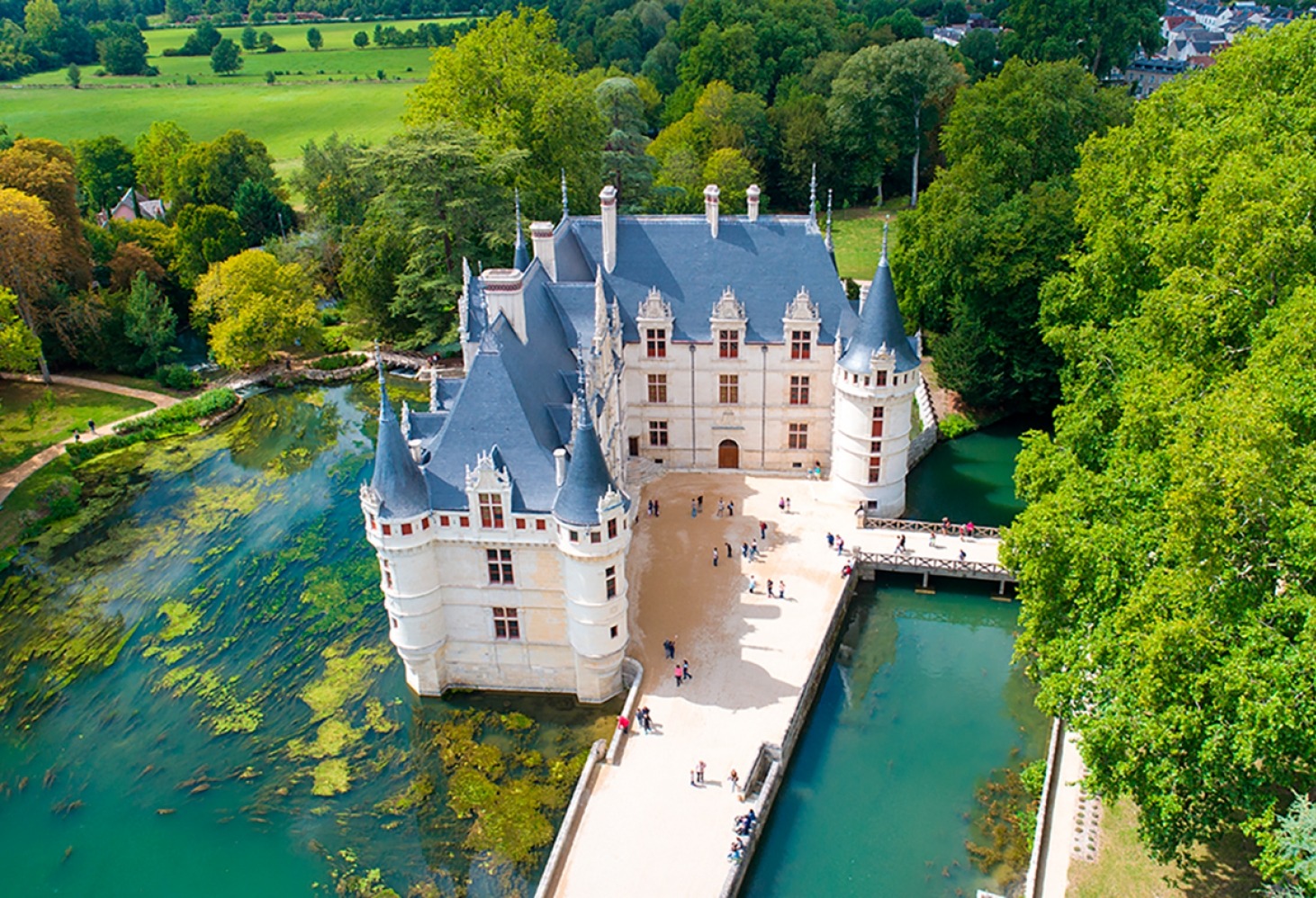 At the beginning of the 15th century, the castle supposedly belonged to the Duke of Burgundy. The insult to the dauphin, the future Charles VII, and his army led to the destruction of the fortress in 1418: 354 people were killed and the village was burned and looted, after which the city was named Azey-le-Brulee (“burnt”). One hundred years later, a castle was built on the site of the fortress, which can still be seen today.

Located in the department of Loire and Cher. 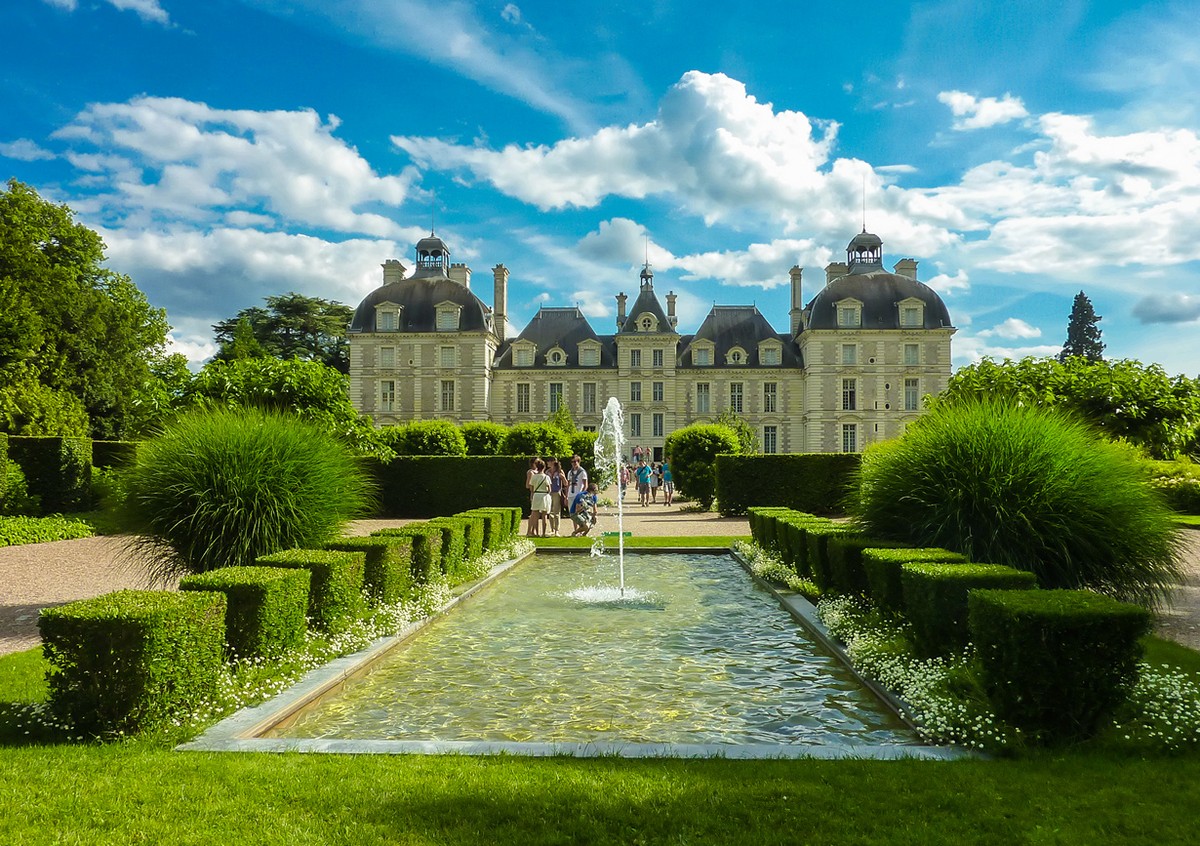 Surrounded by a vast park and splendid gardens, Cheverny has belonged to the same family for more than six centuries. Along with the other chateaux of the Loire, it is protected by UNESCO as part of the World Heritage project.

This palace stands out not only for its architecture (Cheverny is a white castle built in strict symmetry and restrained style), but also for its decoration. The fact is that throughout its history (it was erected in the 14th century) the mansion has been owned and, let’s note, is still owned by the same dynasty today – the Jurault family. Thanks to such continuity and careful attitude Château Cheverny is perfectly preserved (it is considered one of the best palaces in the Loire Valley) – down to the smallest details and household items and interiors dating back to the 14th century. 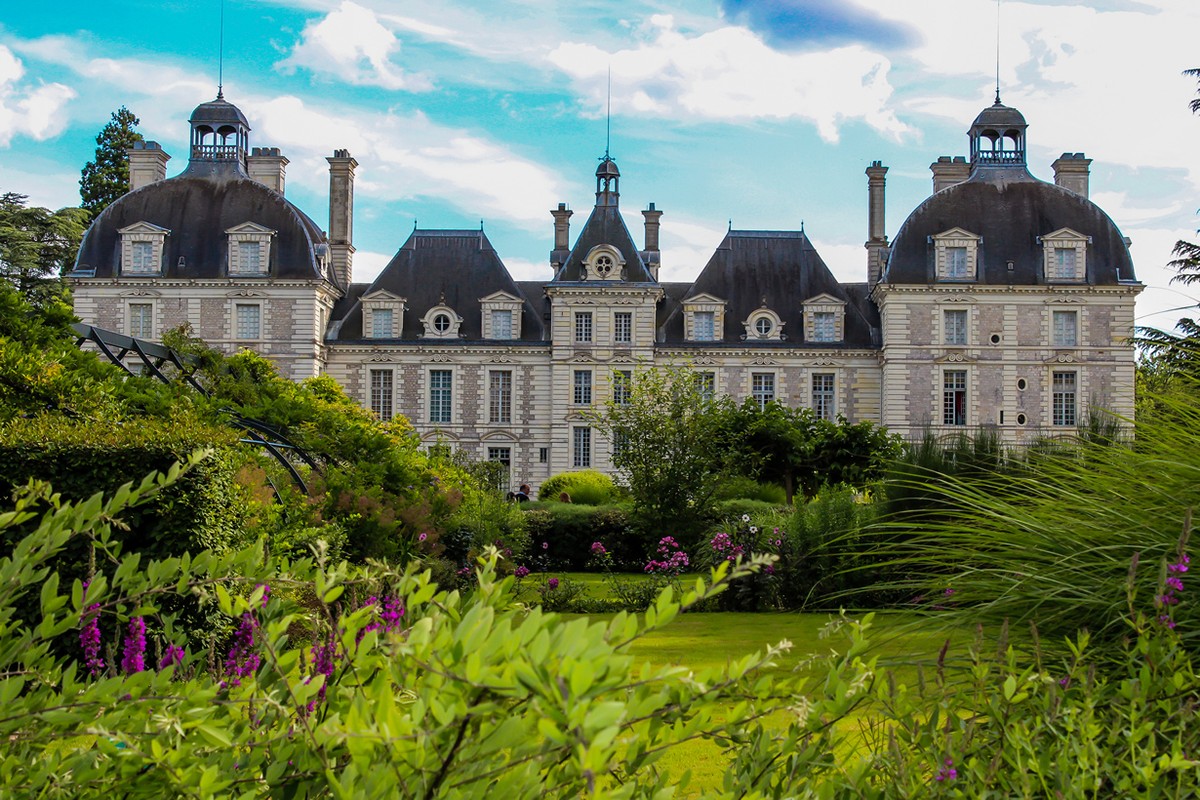 Excursions to Cheverny are an introduction to the true French art de vivre. From the armory to the children’s room, the chic interiors and rich furnishings always impress visitors to the castle. The furnishings of Cheverny are considered the most sumptuous of all the Châteaux of the Loire.

Located in the department of Endre and Loire. 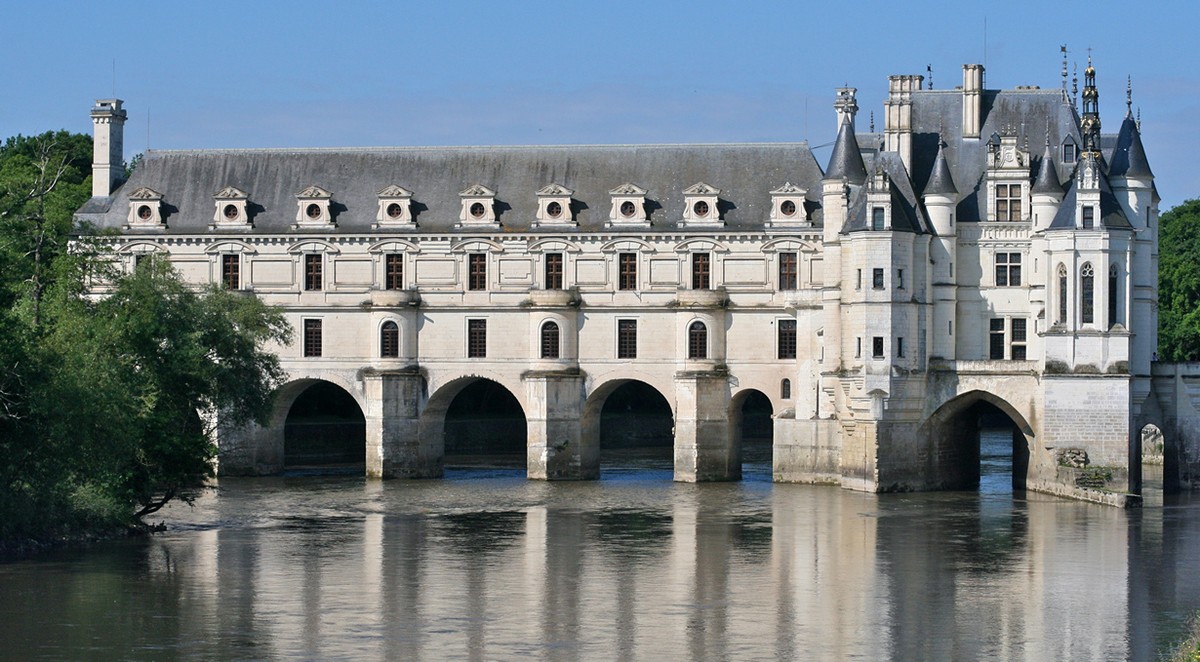 Château de Chenonceau is one of the three most popular châteaux of the Loire Valley and the most beautiful châteaux in France, nicknamed “the ladies’ château” because it belonged to two of the most powerful women in France at that time, Diane de Poitiers, mistress of the king, and Catherine de Medici. This 16th-century castle is one of the most beloved and visited castles in France, the second most visited after Versailles. 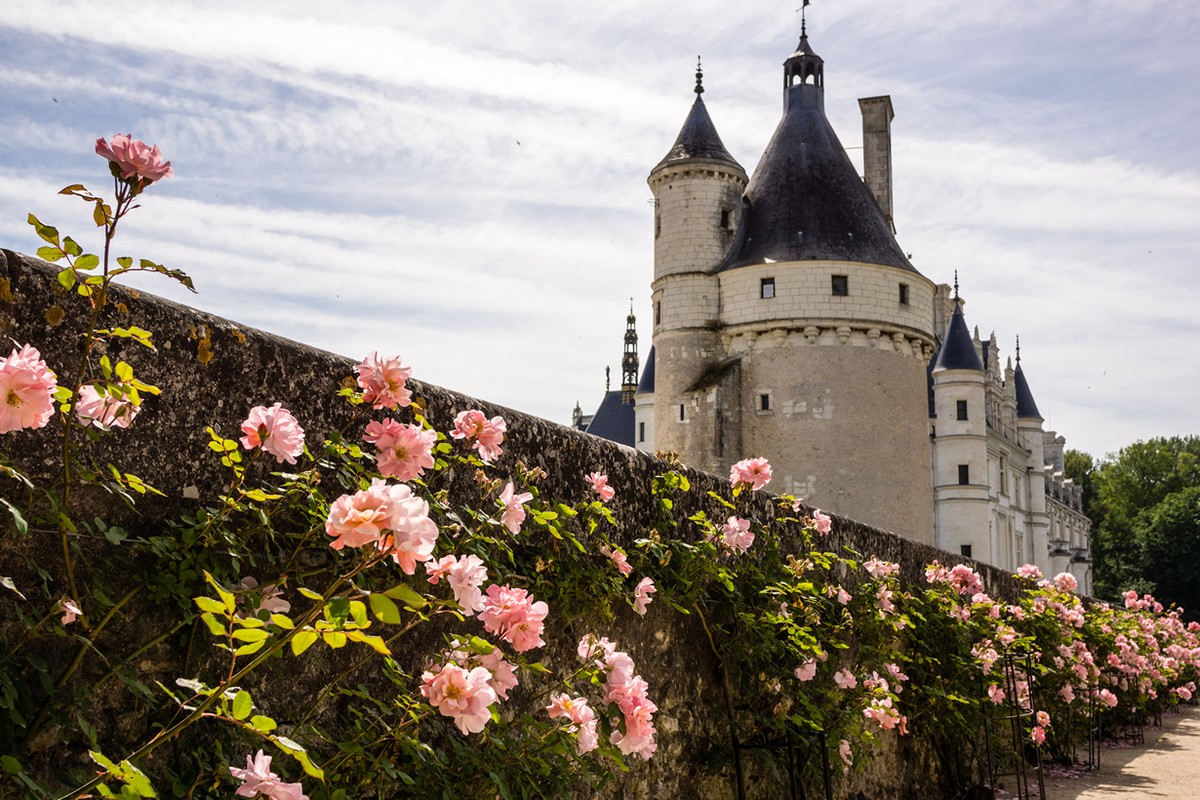 One of the most beloved, famous and visited castles in France, Chenonceau does not belong to the state: it is still privately owned to this day, but its owners, the de Marques family, do not mind at all that guests can enjoy not only the luxury of the interior decoration of Château Chenonceau, but also see the beautiful garden and its picturesque surroundings. 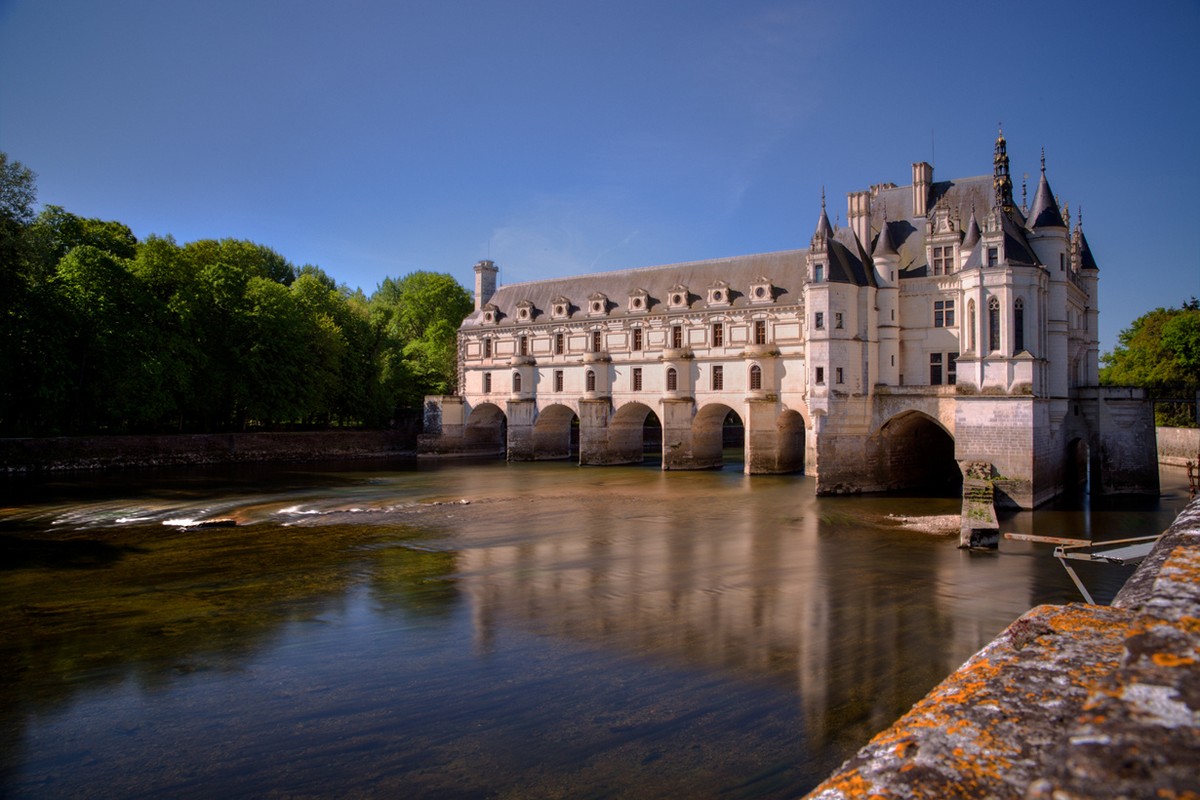 Chenonceau is inextricably linked to the name of Diana de Poitiers, the governess of the king’s son – the mistress of the king and, later, his son Henry II. When the young king came to the throne, he gave the palace of Chenonceau to his beloved. Since then, Chenonceau became known as the “ladies’ castle” (château des Dames). Diana cared a lot about the improvement of the castle: she carried out the redevelopment of the park, on her orders the architect Philibert Delorme has created a project of the stone bridge across the river Cher.

4th place. The castle of the Conciergerie 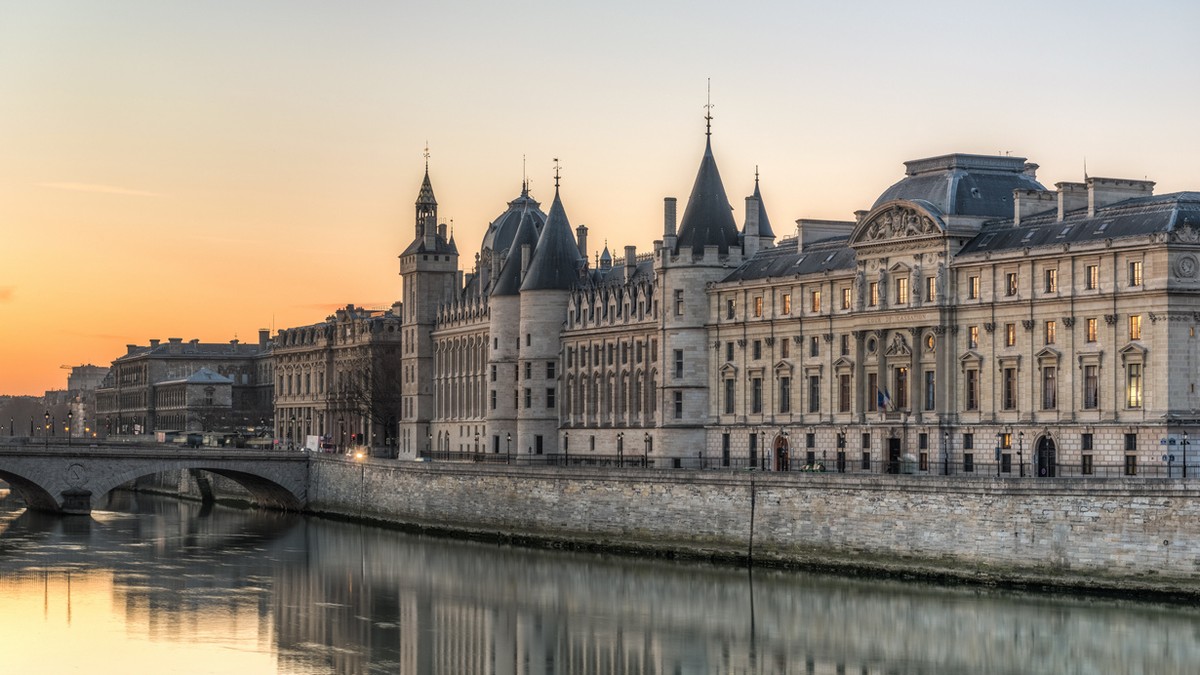 In the heart of the French capital not far from the famous Notre Dame de Paris is the Conciergerie Castle. For a long time it served as a home for the monarch, but during the revolution it was converted into a prison. Today the palace preserves the centuries-old history and is considered one of the key sights of Paris. 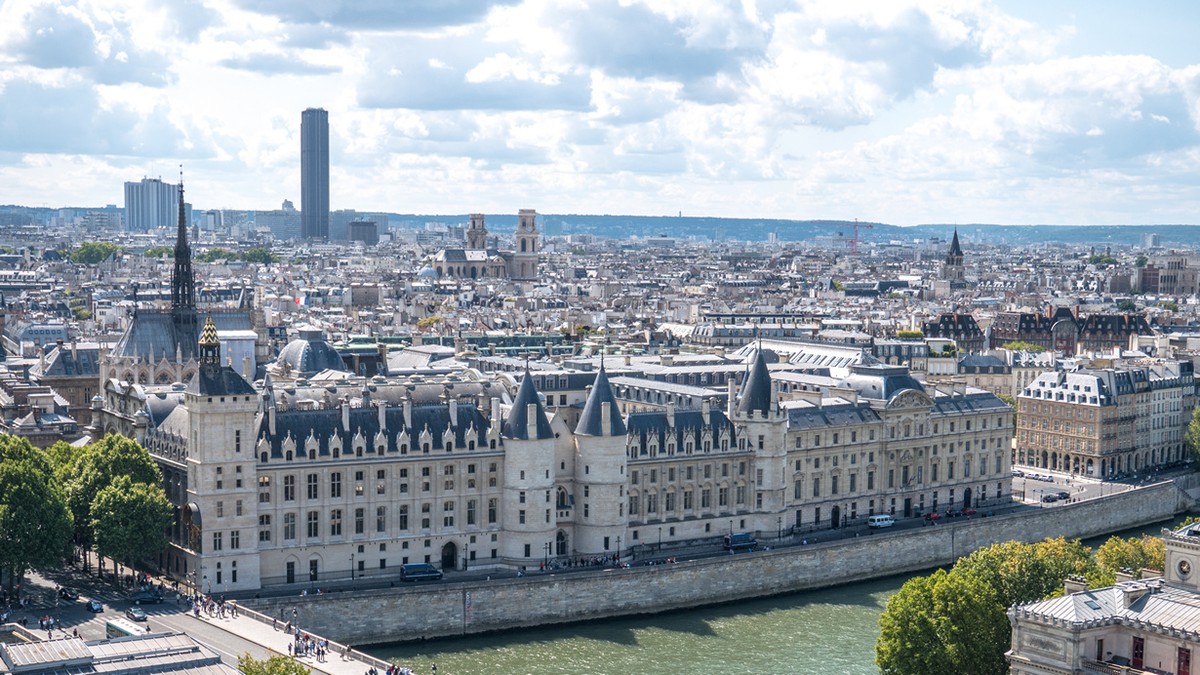 The Château de la Conciergerie is part of the Palais de Justice, which still houses the municipal services, the court, and the prosecutor’s office. This complex occupies almost half of the island of Cité. Today the palace is a heterogeneous architectural ensemble with elements built from XIII to XX centuries.

Located in the Loire and Cher. 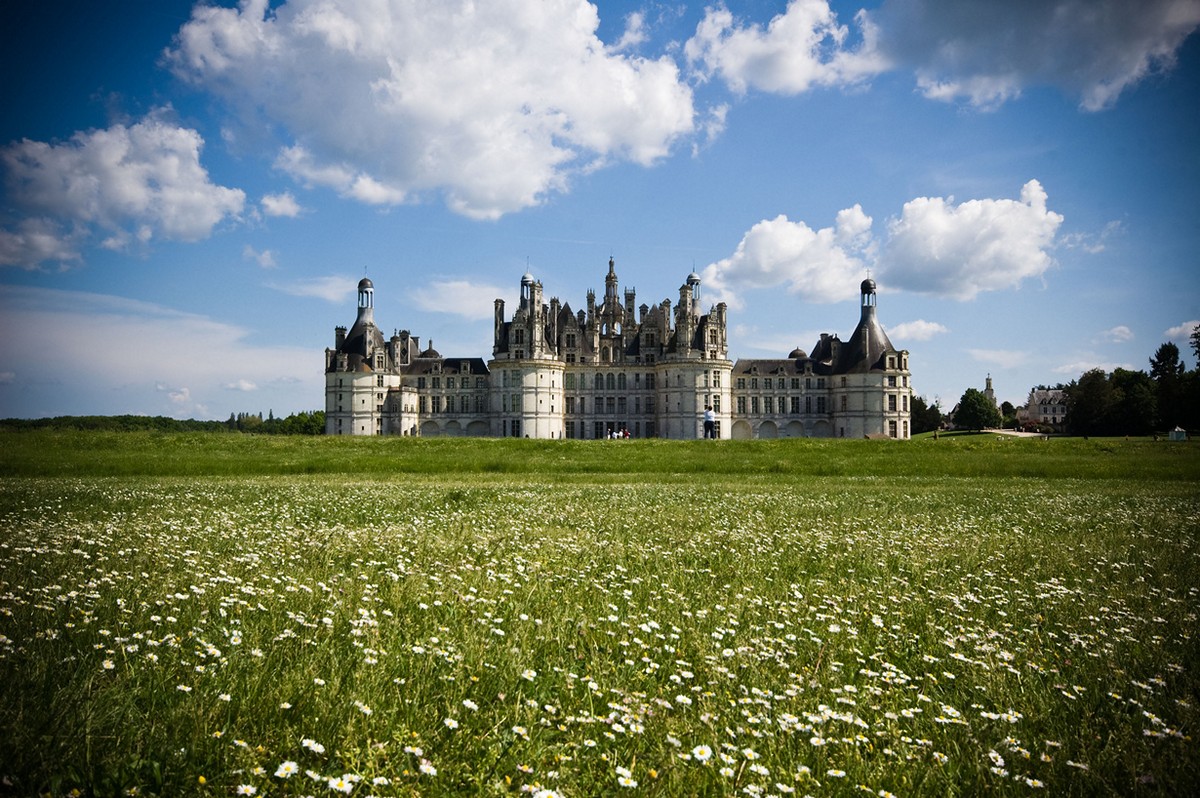 Chambord is the most recognizable of the castles of France, an emblem of the Loire Valley, an architectural masterpiece of the Renaissance. It was built by order of Francis I, who wanted to be close to his beloved lady, the Countess of Turi, who lived nearby. 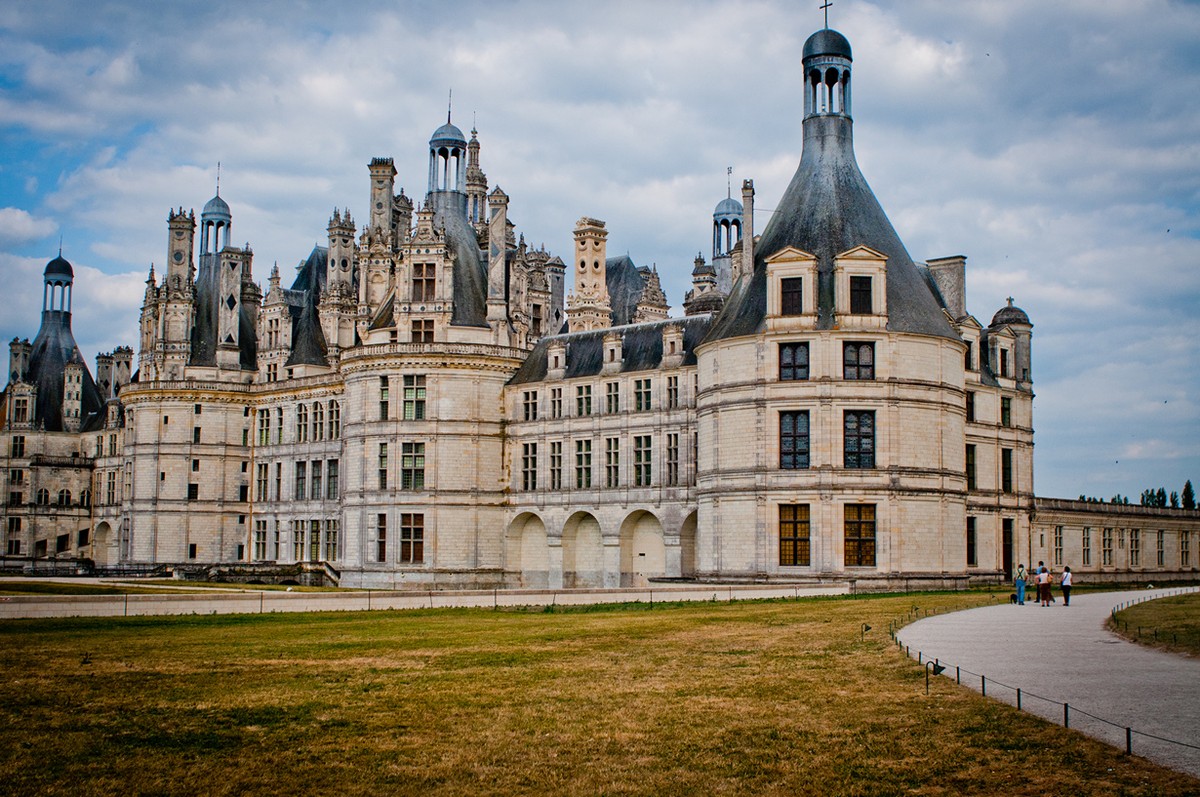 The militant and profligate king of France, Francis I was no stranger to the arts either, patronizing artists and even taking the elderly and famous Leonardo da Vinci out of Italy. 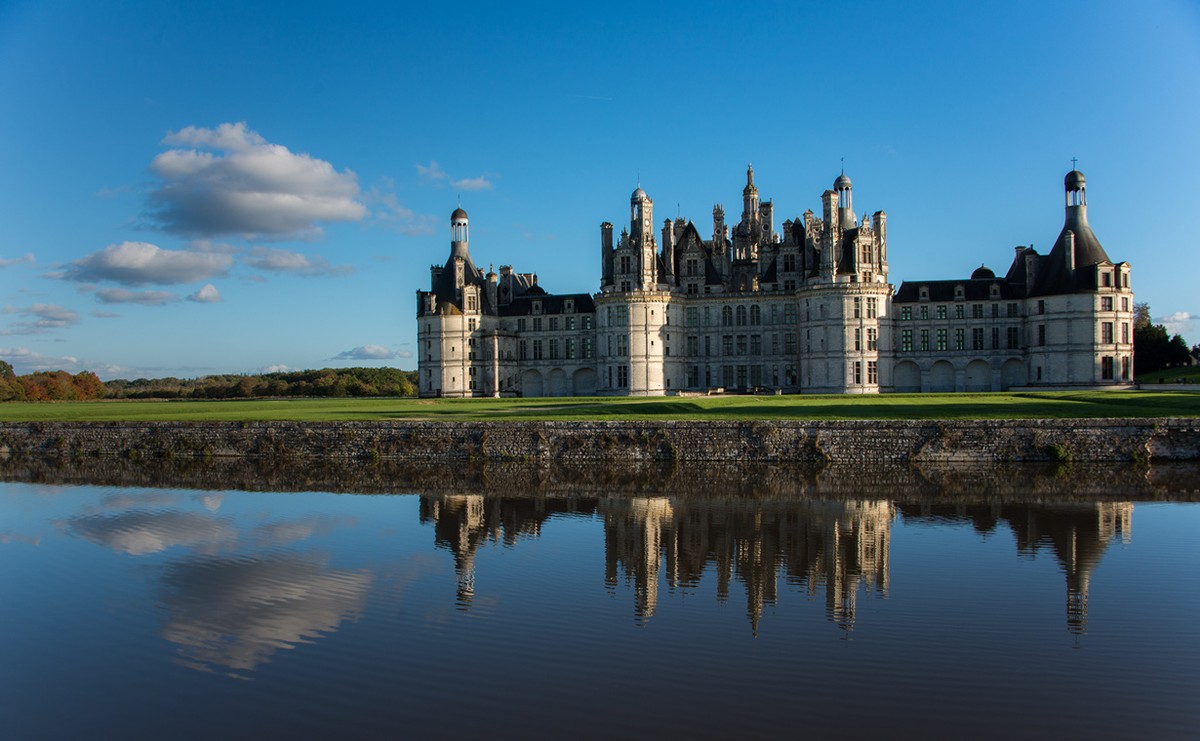 The legendary inventor spent the last years of his life at the court of Francis and died before construction began on Chambord. But it is generally believed that it was he who influenced the beautiful appearance of the castle at the design stage. At least in the design of the main staircase are clearly visible features of the genius.

Located in the suburbs of Paris. 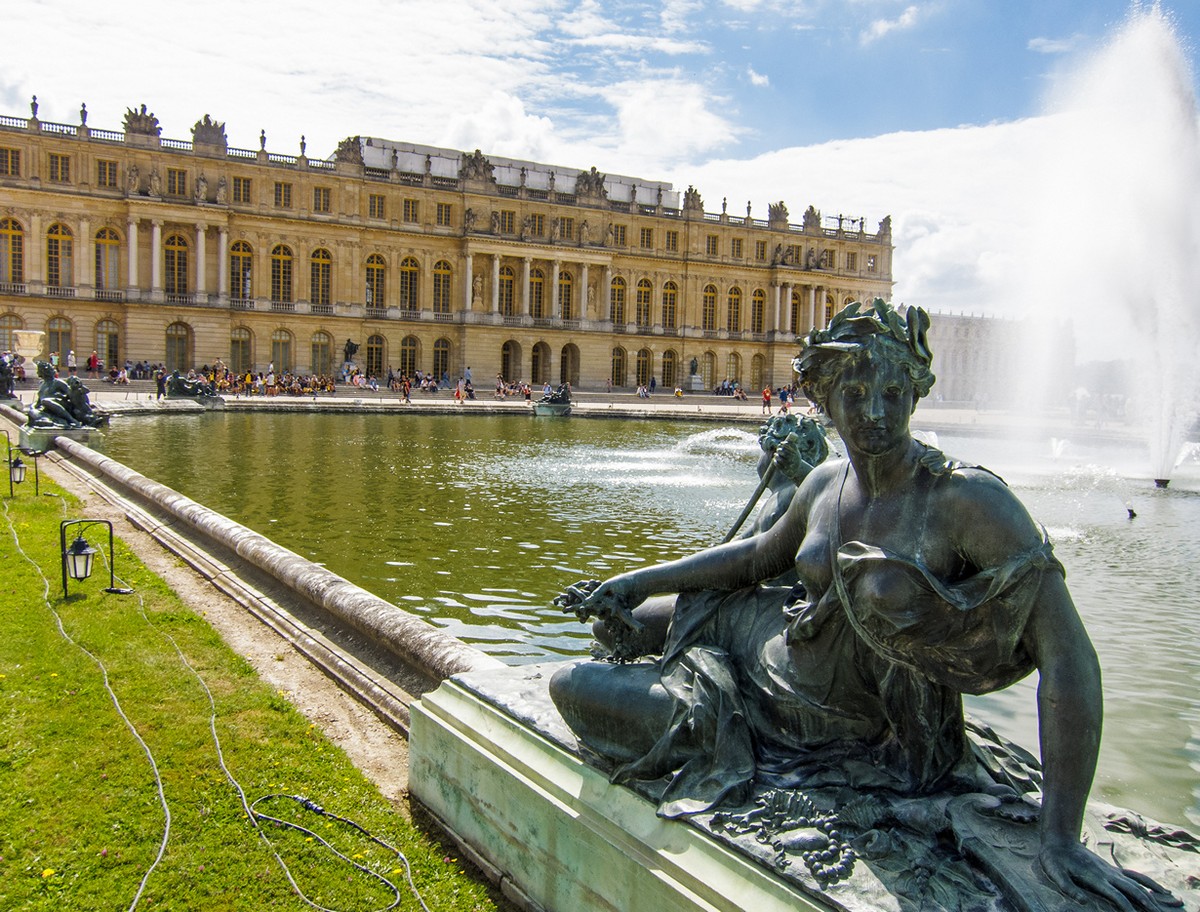 Versailles is a palace and park ensemble in France, the former residence of French kings in the city of Versailles, now a suburb of Paris; a center of world tourism.

The pearl of French architecture and magnificent palace of a vain monarch, Versailles was created to emphasize all the greatness of the “king-sun”, Louis XIV. But for all the luxury, there was not a single toilet provided here. 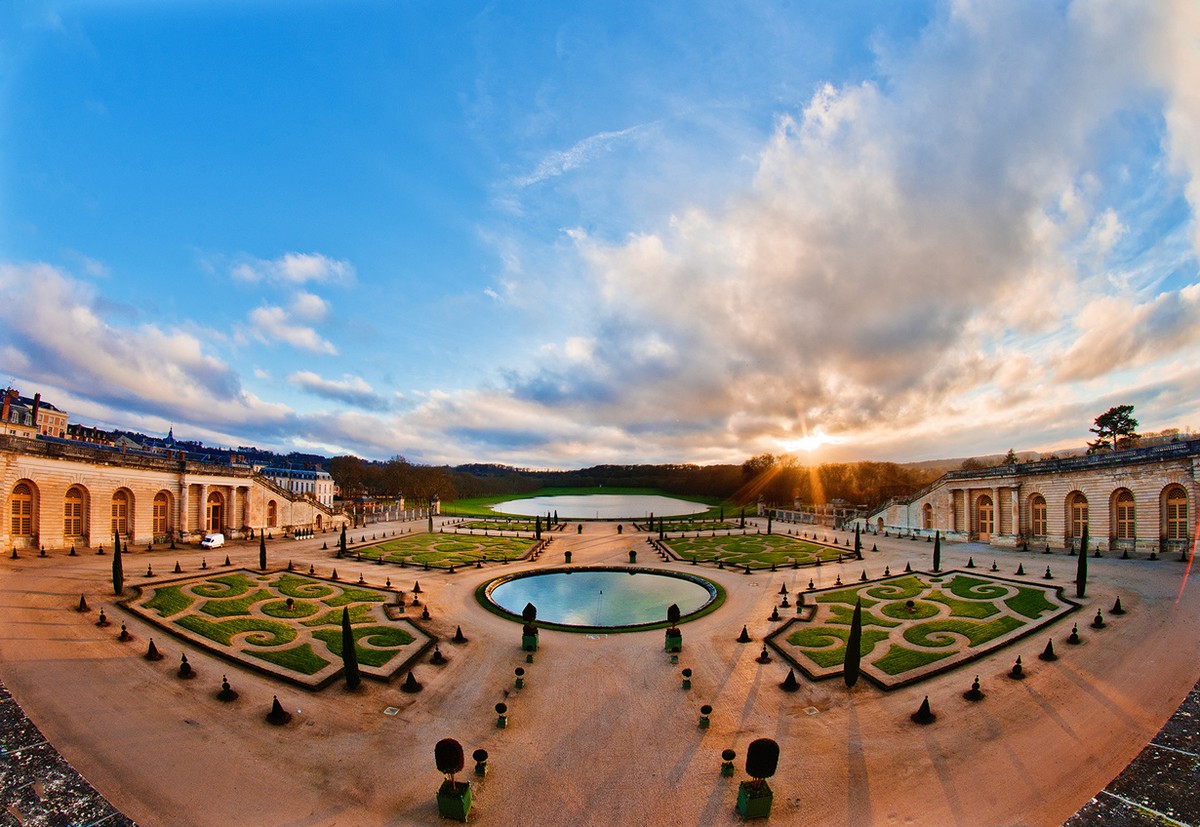 Versailles had been built under the direction of Louis XIV since 1661 and became a kind of monument to the era of the “king-sun”, artistic and architectural expression of the idea of absolutism. The leading architects – Louis Leveau and Jules Ardouin-Mansard, the creator of the park – André Lehnotre. The ensemble of Versailles, the largest in Europe, is distinguished by the unique integrity of the concept and harmony of architectural forms and transformed landscape. Since the late 17th century Versailles has served as a model for the grand suburban residences of European monarchs and aristocracy, but there are no direct imitations.

READ
13 things to do in British Columbia, Canada

Located in Normandy, the department of the Manche. 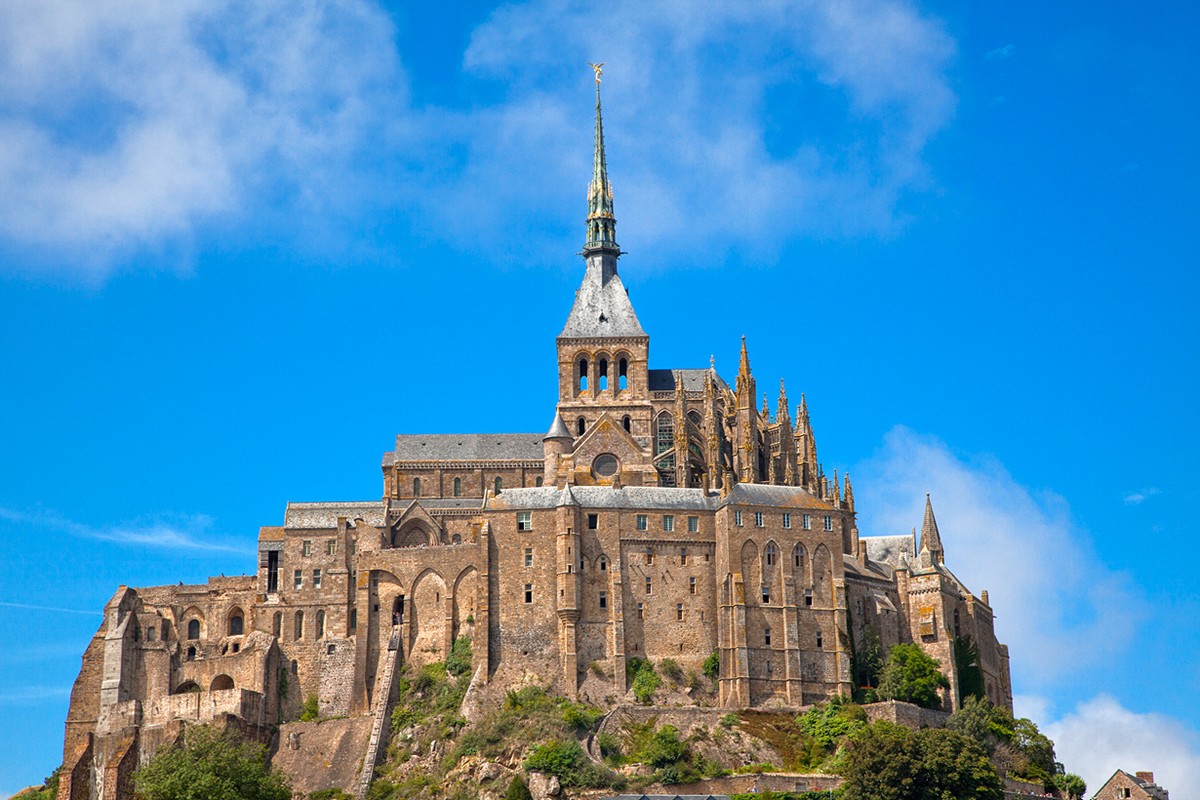 The famous island-fortress, located in northern France, on the border with Brittany. It is one of the most visited attractions in France, and the island itself with its historic buildings is listed as a UNESCO World Heritage Site. 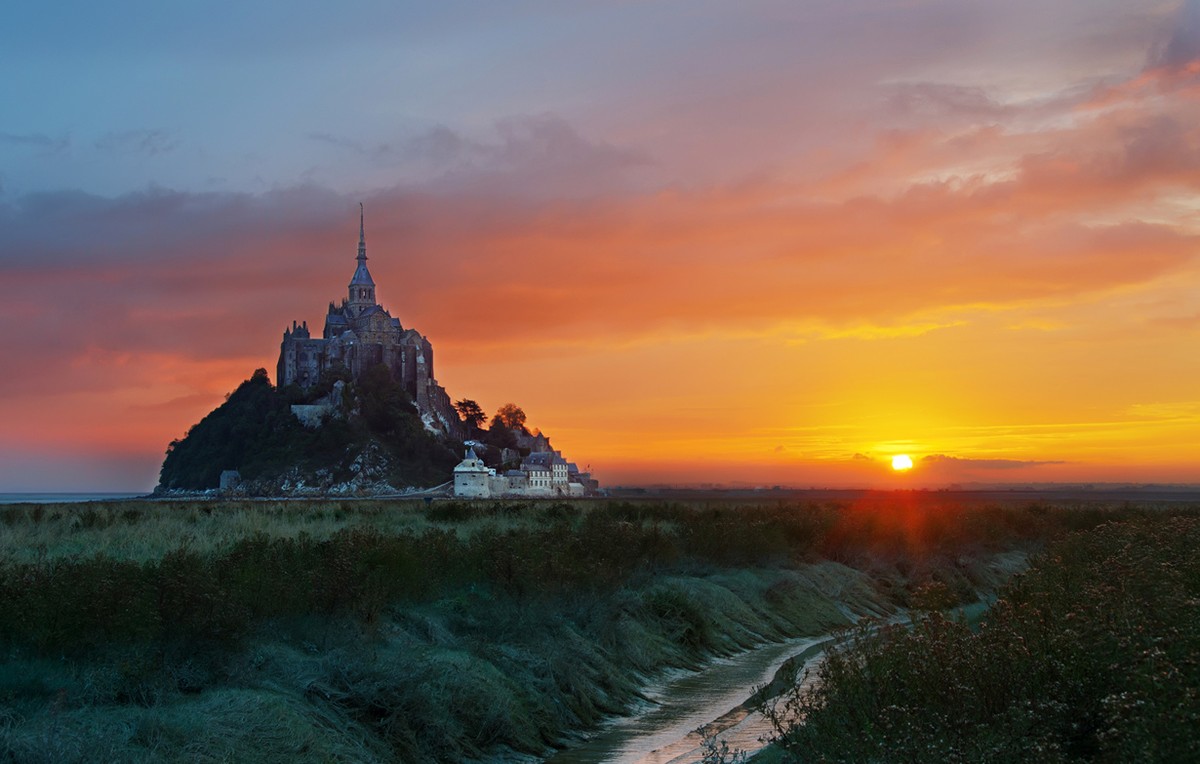 The island is the only inhabited of the three granite formations of the bay of Saint-Michel (Mont Saint-Michel, Tomblin and Mont Dol). The city on the island has existed since 709. It currently has several dozen inhabitants.

The island is located 285 km west of Paris. Tourists from all over the world are attracted by the picturesque location of the abbey and the surrounding village on a rocky shore, the historical and architectural monuments, and the unique tides in Europe.