The 12 best places in Cantabria

If you’re going on vacation to Cantabria, read my ranking to make it easier to plan your vacation.

1. El Soplao Cave – one of the great wonders of geology

El Soplao Cave was discovered during the mining of lead-zinc ores in the early 20th century. Until then, the cave had evolved over many millions of years as a closed capsule with its own special microclimate. 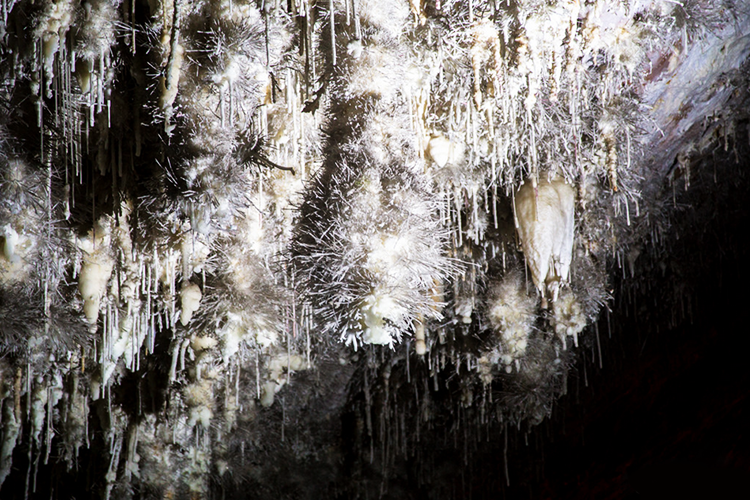 Because of this stalactites, stalagmites and other karst outgrowths have their own unique appearance and pattern.

Along the 3 km route you will find the hall with ghosts, an underground river, the opera hall with a crystal ceiling and soft symphonic music, karst palms, crystal waterfalls and many other mysteries of nature, which have not yet been solved by scientists. Read more about the cave here.

If you are traveling through Cantabria during the winter and spring season, don’t miss the opportunity to see the magnificent spectacle of the waterfall from which the river Ason begins. You can see this spectacular show at the Collados del Azón Natural Park. 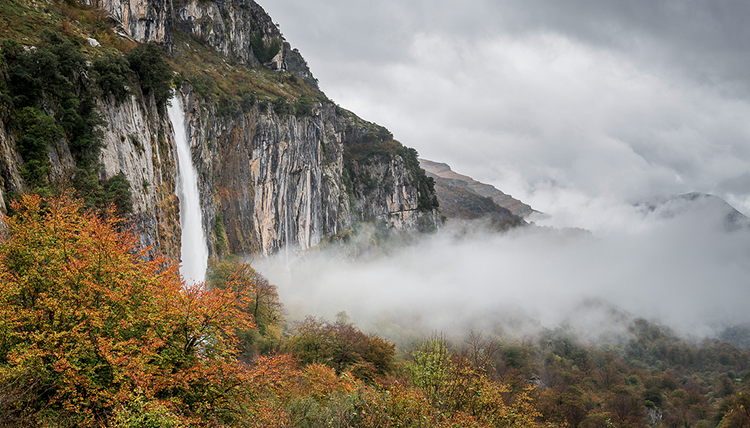 A huge, rumbling stream of water against the background of white limestone rock surrounded by forests is simply mesmerizing. And from the observation deck, which is just above the waterfall, you can admire the ocean.

Nacimiento delrio-Ason Falls is the third largest waterfall in Spain.

The Altamira Cave, discovered in the second half of the 19th century, is one of the most unique monuments of primitive rock art. 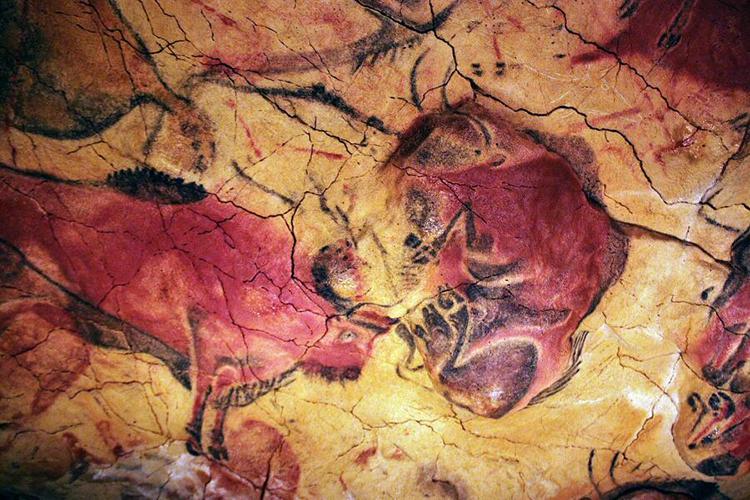 The drawings found in Altamira Cave, which are up to 18,500 thousand years old, are made in a unique polychrome technique. And these are not isolated drawings. The ceiling of the cave is completely full of them. Some drawings are placed one on top of the other. You will not find analogues anywhere else in the world.

Altamira Cave is included in the UNESCO World Heritage List.

This is probably one of the oldest Castles surviving in Spain. It was built by King Alfonso I of Asturias at the beginning of the Reconquista to protect the lands conquered from the Muslims. 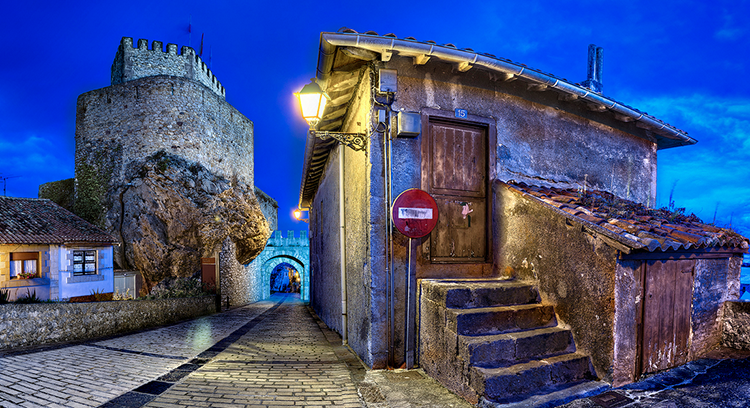 If you climb up to the roof of the Royal Castle, you will see stunning landscapes of one of the most beautiful nature reserves in Spain, Oyambre. Read more about San Vicente de la Barquera here.

There is not a photographer in Cantabria who does not have pictures of this beach. It is one of the most picturesque places on the coast of the region. 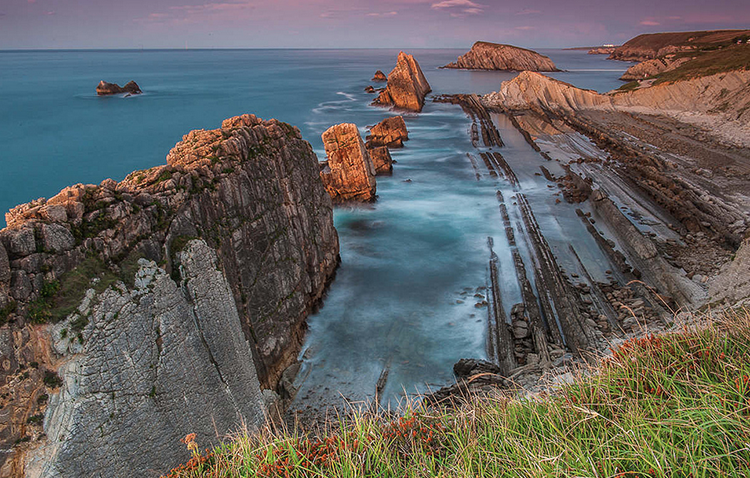 The flechette systems, the Urros sailing cliffs rising from the oceanic abyss and other bizarre geological forms give a unique charm to this place, which is part of the Costa Quebrada Geopark system.

6. Cathedral of the Assumption of the Virgin Mary and Santa Ana Fortress in Castro Urdiales

The Cathedral of the Assumption of the Virgin Mary in Castro-Urdiales is one of the first Gothic cathedrals in Spain. Its construction dates back to the first half of the 13th century, the period of the birth of the Gothic style in Europe. 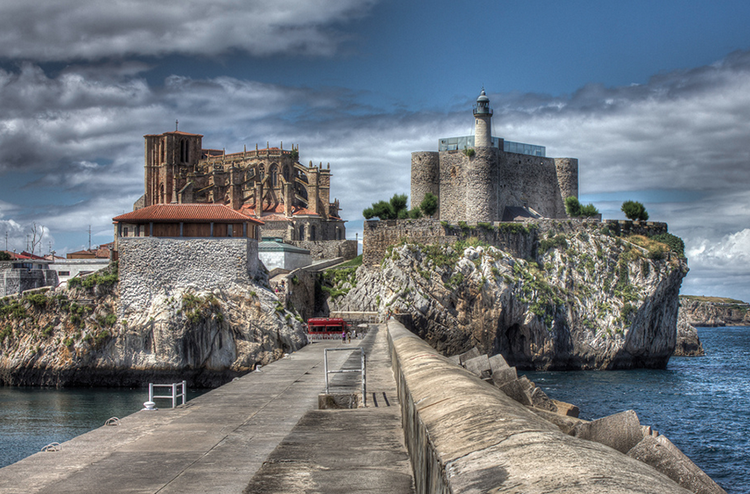 The cathedral is located in the fishing town of Castro-Urdiales over the ocean cliff, which creates a special charm to this structure.

In a single architectural complex with the Cathedral of the Assumption of the Virgin Mary is the Fortress of Santa Ana, whose construction dates back to the X century. From the observation deck of the fortress, which can be climbed through the spiral staircase, offering magnificent views of the fishing port and the vast ocean.

Cabo Mayor Lighthouse is located in the northern part of the city of Santander on Cape Mayor. Cape Cape height is 61 meters above sea level.

READ
Why it's worth coming to Marsa Alam, Egypt 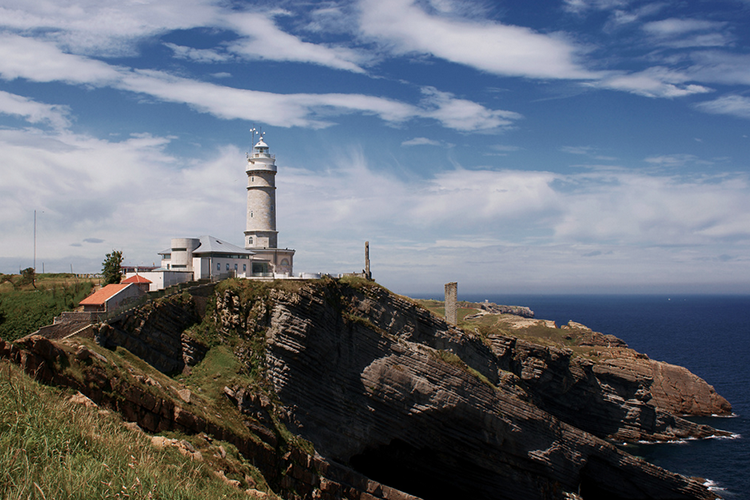 From the lighthouse observation deck, which offers magnificent views of the ocean, there is a narrow path to the extreme point of the promontory, reaching the end of which you will have a stunning view of the rock itself, on top of which rises a 30-meter lighthouse.

The rock is built of black flush from the Triassic period, which creates a special magic of this place and an incredible shade of water. From this rock starts the Geopark of Costa Quebrada which extends further to the west for 20 km.

Also from the observation deck of this path you can enjoy beautiful views of the whole coastal area of Santander, La Magdalena Peninsula with the Royal Palace and the island of Mauro with the lighthouse.

8. The Collegiate Church of St. Juliana

The Collegiate of Santillana del Mar is one of the best preserved monuments of Romanesque architecture in Spain. 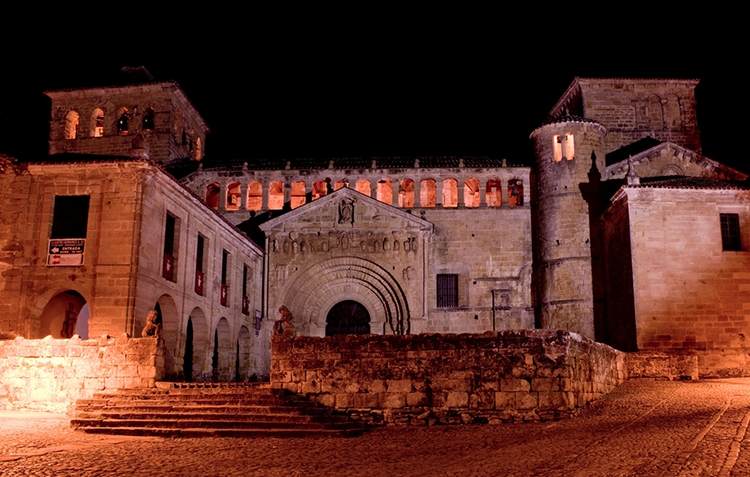 The first chapel with the relics of St. Juliana was laid out on this site in the 6th century. The present building of the Collegiate was built in the 11th century according to all the canons of the Romanesque style.

Be sure to visit the inner courtyard of the Collegiate, decorated with columns. Remarkable is the fact that the pattern on the capitals of the columns is not repeated.

9. The Royal Palace of La Magdalena

The Royal Palace of La Magdalena, located on the peninsula of the same name in Santander, is definitely one of the main attractions of the city. 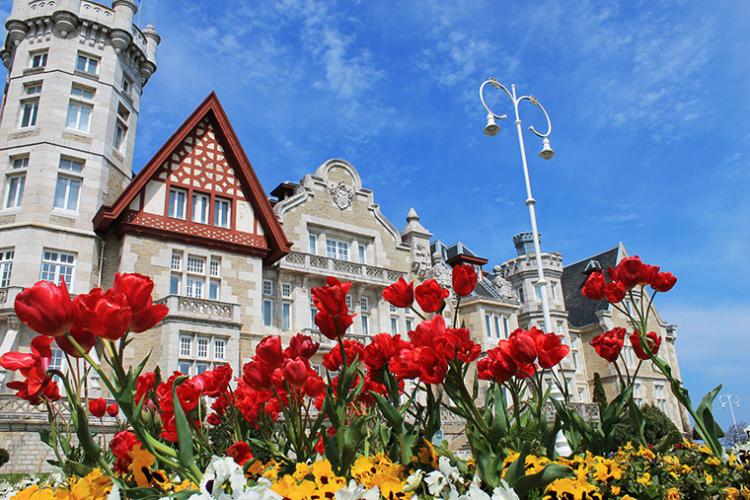 Built in 1912 as a summer residence for King Alfonso 13 and his family, this structure by local Cantabrian architects still impresses today with its grandeur and beauty.

The Royal Palace is washed on three sides by the waters of the Atlantic Ocean. The views from the observation decks are spectacular. And the palace itself is surrounded by a huge park, where it’s so nice to walk along the paths among the pine groves, look at the mini-zoo, watching the feeding penguins and seals.

READ
The luckiest country in the world!

And on the territory of a small Museum of the Man and the Sea learn about the exploits of the intrepid sailors of Cantabria.

Carmona is a village hidden in an intermountain hollow in the Sakha Reserve. It is a beautiful example of the archaic structure of life in the mountain villages of Cantabria. 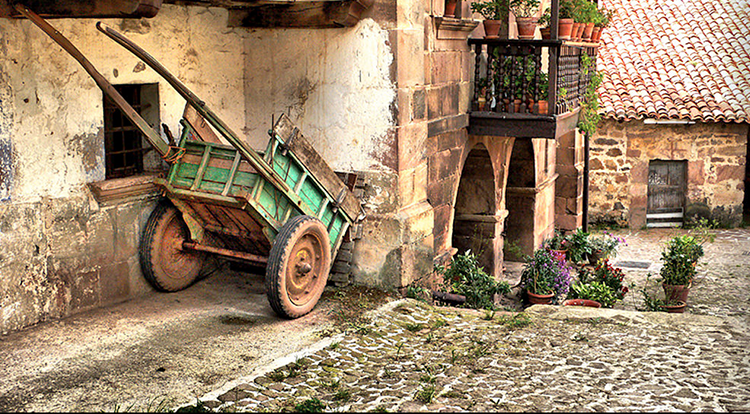 The locals, of whom there are no more than 250 inhabitants, are engaged in crafts, making various handicrafts of wood. In the morning you can often find villagers walking down the street in their famous wooden shoes, lobarcas.

And the other main activity of the inhabitants of Carmona is agriculture. The village is surrounded by well-kept vegetable gardens on the slopes of the mountains and numerous pastures where local Tudanka cows graze. It is a special pride of the locals. In honor of her folk festivals are arranged here, and in the village itself the monument to the cattle is established.

Cabarseno Safari Park is one of the most fascinating places in Cantabria and a must-see when traveling in the North of Spain. 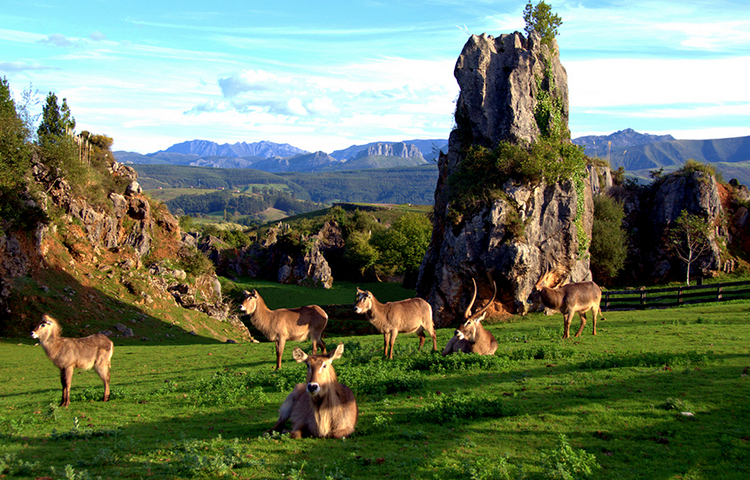 The Safari Park is a former quarry where iron ore was extracted in the open pit. At the end of the 20th century the pit was landscaped and populated with animals from all over the world.

On the territory of the park there are 20 kilometers of asphalt roads, on which you can comfortably move by car or bike between the areas where different species of animals live.

Cabarseno Safari Park is an excellent example of a zoo without cages or aviaries.

Cabarseno is not only an opportunity to see the fauna of all continents, but it is also a very interesting natural area with bizarre geological formations left by mining.

The cable car in Fuente De to the peaks of the Peaks of Europe is one of the most visited places in Spain, after the Teide volcano. 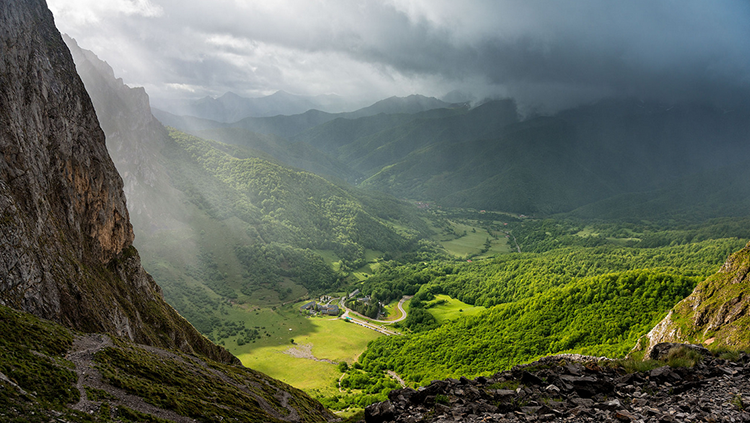 A 4-minute ascent in a cabin by cable car, with an altitude of 800 meters and in front of you a stunning view of the intermountain valley in which Fuente De and the surrounding mountain ranges is located. A great place to meditate.

From the observation deck start 2 walking routes among the peaks of the Peaks of Europe.

These are, of course, only the highlights of Cantabria that I recommend you visit. If you want to see and learn more while traveling in Cantabria, contact me.