The 8 most beautiful lakes to swim in France

When we explore France, our attention can be captivated by many magnificent places. Between its thousand-year-old mountains, verdant landscapes and numerous rivers, France is one of the most outstanding countries in the world. But this country stands out all the more for its abundance of adjacent lakes.

In the summer, when the temperature rises a little, it’s always nice to take a swim in a lake. Away from the torment of the river and its incessant flow, bathing in a lake is as refreshing as it is soothing. So we have prepared a small selection of the most beautiful lakes for swimming in France. Between dreamscapes and bubbles of relaxation, let yourself be enchanted by these most unusual places!

To begin our tour of the most beautiful swimming lakes in France, let’s go to the Jura. Thus, it is in this region that Lake Vouglan can be found. It is one of the reservoirs of the Jura massif and the third largest artificial lake in France. It was built in the 1970s and stretches for almost thirty-five kilometers. 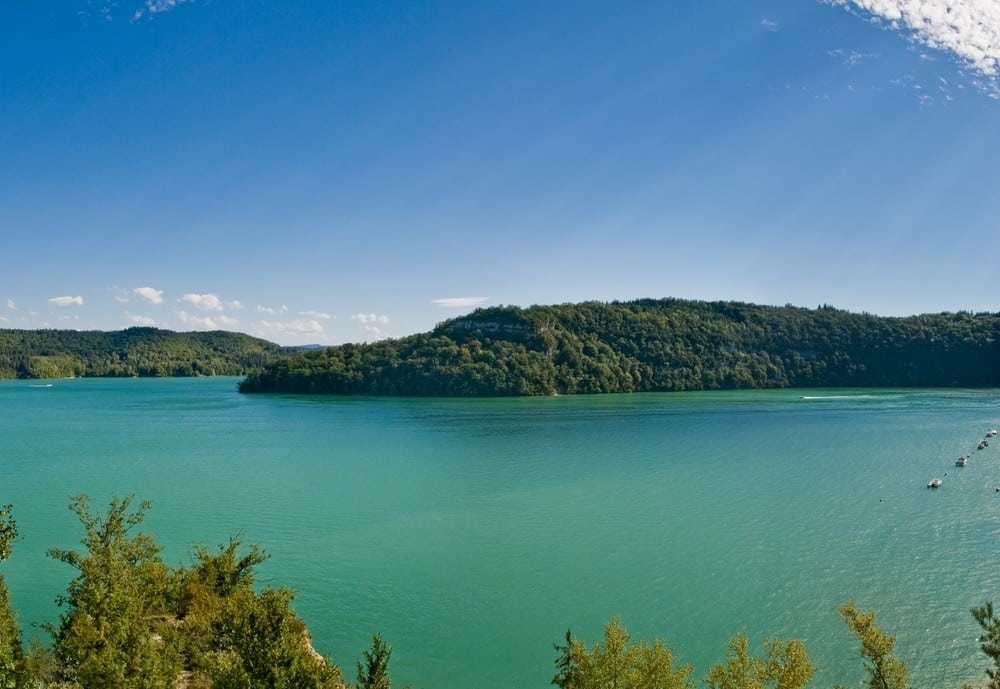 It is a mountain lake, its water is clear, almost turquoise, with a hue of paradise. The surrounding landscape is completely natural, and the flora of the Jura is striking. If you paddle this body of water by boat, you can even come across ash or pike. In addition, Lake Wooglan offers many activities for the whole family besides swimming. Therefore, Lake Wooglan is the most ideal place to spend a beautiful summer afternoon!

We take a short drive from the Jura to Savoie and its magnificent Lake Bourget. This is the largest natural lake of glacial origin, located entirely in France. Indeed, it dates back to the last ice age in the Alps, more than 19,000 years ago. 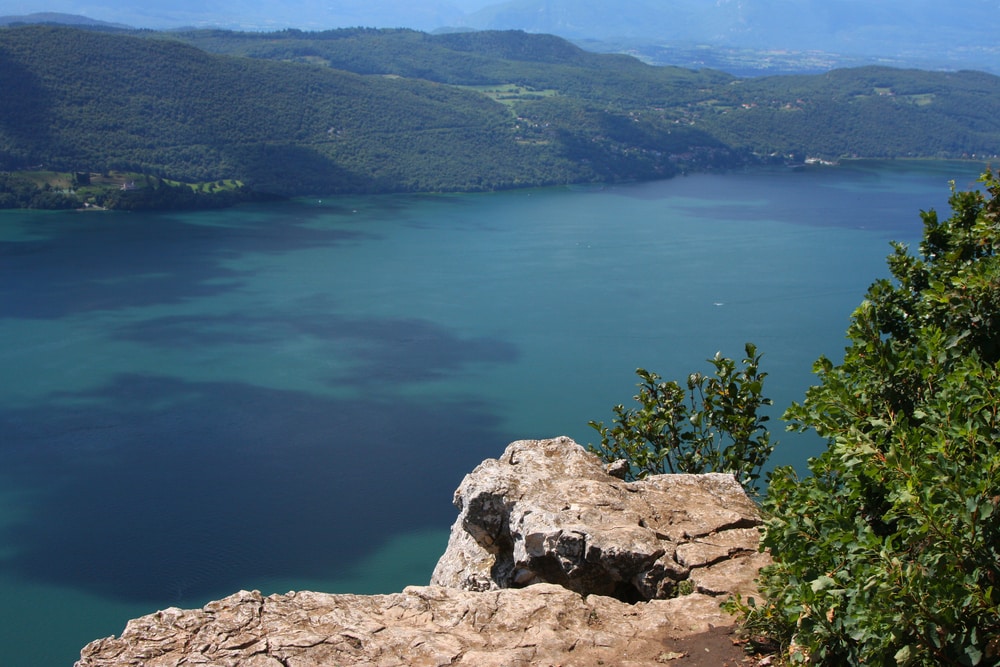 Lake Bourget is today one of the gems of the region. In addition to its many beaches and recreational centers, it is also home to the magnificent Otcombe Abbey. This magnificent Gothic-style building, built in the 12th century, is still active.

But the most beautiful sight remains the scenery. Indeed, the turquoise waters of the lake are most magnificent, and its surroundings are breathtaking! It definitely takes its place in our list of the most beautiful lakes in France for swimming.

The direction of Haute-Savoie is ideal to discover the famous Lake Annecy. It is the only one of its kind in the French Alps, at an altitude of almost five hundred meters. The animal world of this magnificent lake is extremely diverse. On the territory of the reservoir you can see pike, carp, trout, clams, snakes, ducks, voles and many others. 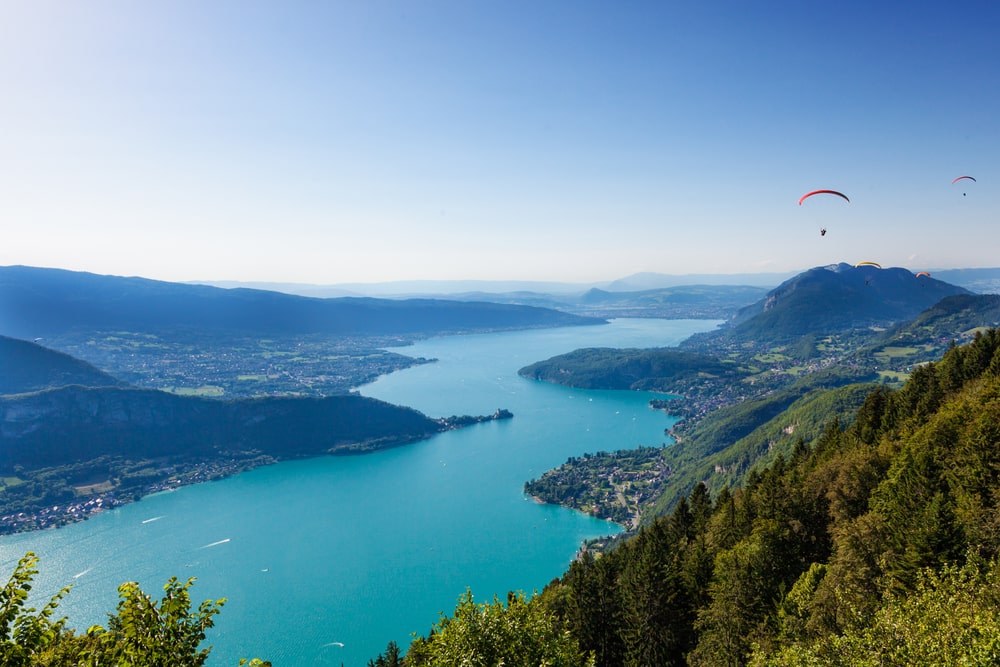 Thus, you are likely to meet many visitors if you go to the lake by boat. As for the surrounding scenery, there’s plenty to take your breath away! Indeed, this water point offers a unique view of the French Alps. And in particular Mt. Tournette and the Massif des Beauges.

In addition, Lake Annecy is known as the cleanest urban lake in Europe. Therefore, its waters are incredibly clear. So, it goes without saying that it is one of the most beautiful swimming lakes in France! It has also inspired many artists throughout history, such as Jean-Francis Aubourtin and Paul Cézanne.

Lake Saint-Cacien is located in Provence, in the department of Var. It is a reservoir filled with water in the 1970s, its water is particularly turbid and lacks oxygen.

It also harbors very little fauna and flora after ten meters depth. Nevertheless, the lake is home to many fish, mollusks and sedentary birds. It is also a favorite fishing spot for carp. Because of its peculiar shape, the surrounding forests have an equally diverse and interesting flora.

READ
The most beautiful botanical gardens in the world 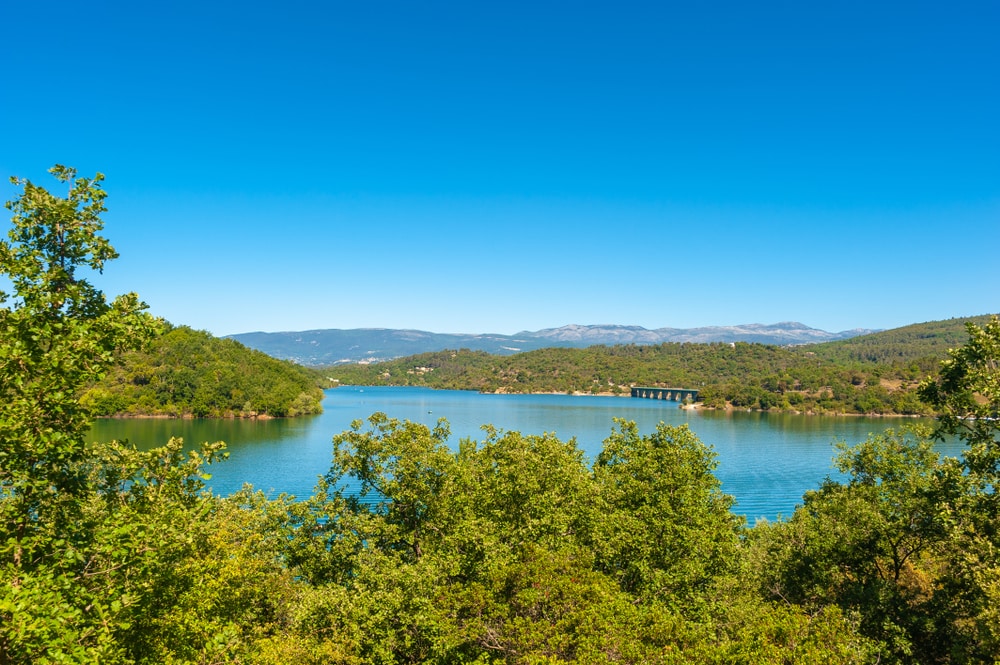 However, although it is one of the most beautiful lakes in France, bathing in Saint-Cassien is not controlled. Despite this, you can enjoy many other water activities. You can navigate Saint-Cassien on a walk, you can try paddling in its magnificent waters. You can even consider fishing on the lake, provided, of course, you have a valid license to do so!

This reservoir was created after a dam was built in the 1950s. Parelup is located on the Levezu Plateau, between the towns of Rhodes and Millau, at an altitude of almost eight hundred meters. The peculiarity of this lake is that it has several small islands. In the summer, it is very popular with fishermen who catch big catches, such as pike. 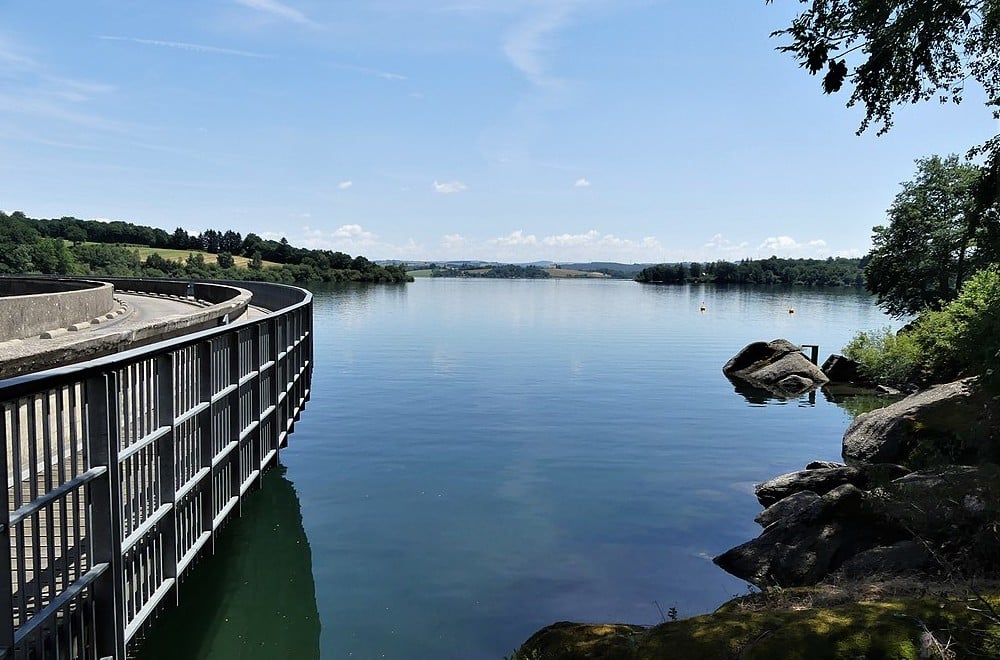 The lake is located in the middle of natural landscapes and beautiful fauna! Therefore, it is one of the most attractive places for swimmers, which offers them a unique opportunity to relax in the lap of nature. Which, of course, makes it one of the eight most beautiful swimming lakes in France. So feel free to take a walk or have a picnic with family or friends.

Salagu is the reservoir of the dam of the same name. It is located in the heart of the department of Ero. This reservoir is a tourist attraction easily accessible from Bezier, Montpellier or Sete. It is distinguished by its centrally located island, and it is more than one hundred meters above sea level.

It is also bordered by the region’s magnificent mountains and plateaus. In particular, from its paradisiacal beaches you can admire Karels in the west and Mont Liosson in the south. In addition, this reservoir has the peculiarity of a soil composed of “ruff.” It is a kind of clay of a bright red color. Also, many volcanic rocks can be found in Salagu, indicating intense volcanic activity in the region several million years ago.

READ
Walking through the German cities: stories and interesting sights 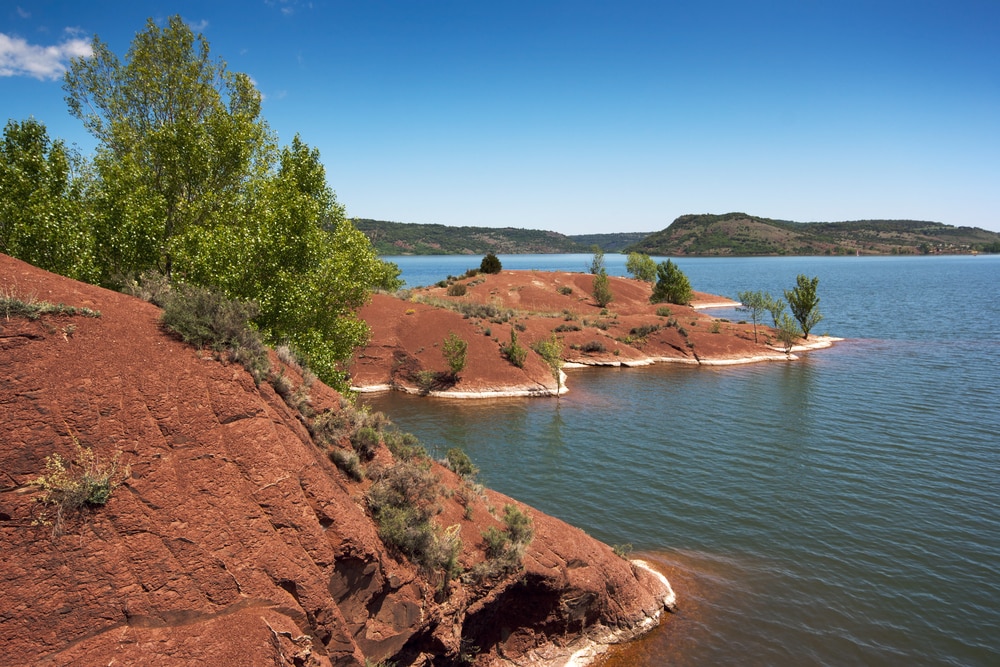 Currently, Lake Salagu offers many marine activities. Including swimming, boat trips, and windsurfing. Very popular with tourists, this one-of-a-kind place is one of the most beautiful parts of Herault and lakes to swim in France! It is sure to give you an unusual experience and magnificent scenery.

Most of the most beautiful French lakes are located among mountain ranges. Therefore, they have the distinct advantage of being cut off from the world and offering unique swimming moments. The downside, however, is that it is not easily accessed. And among France’s most beautiful lakes for swimming, Lake Oo is no exception. 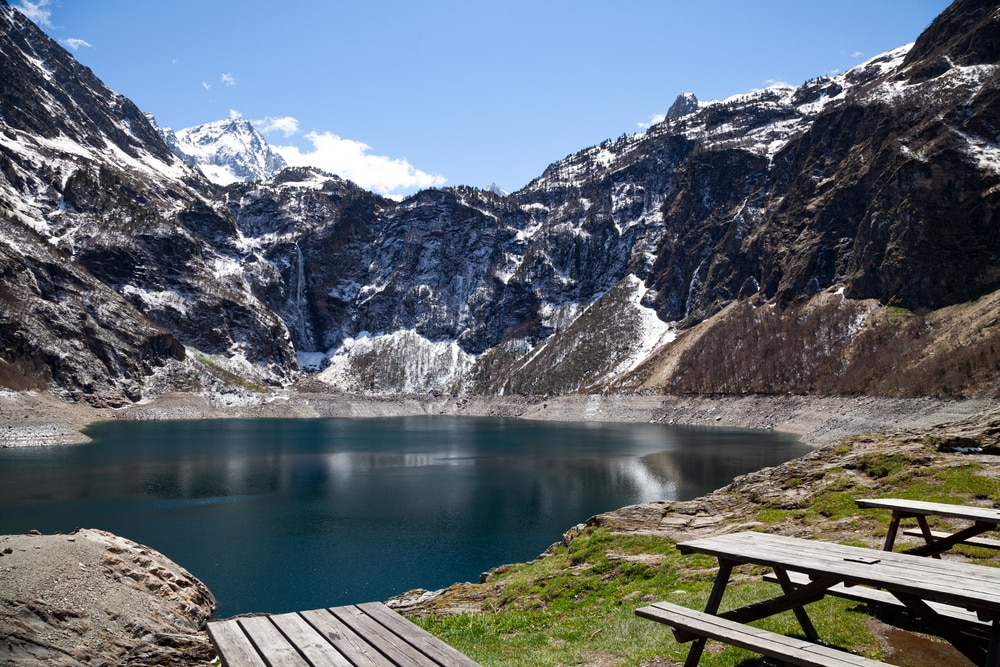 Indeed, to reach this lake, you have to walk almost six kilometers, as it is located at an altitude of almost 1,500 meters. From here, you have a breathtaking view of the surrounding mountains and the green nature of the Pyrenees. What can I say, it seems to be a paradise, and you risk quickly becoming enchanted by this unusual lake!

This lake is in the heart of the Landes and is one of the largest natural lakes in France. It is located between the two towns of the same name, Urtenes and Carcans. Locals call it Lac d’Hourtin in the north and Lac de Carcans in the south. It stretches for 18 kilometers parallel to the Atlantic Ocean and is almost 5 kilometers wide. 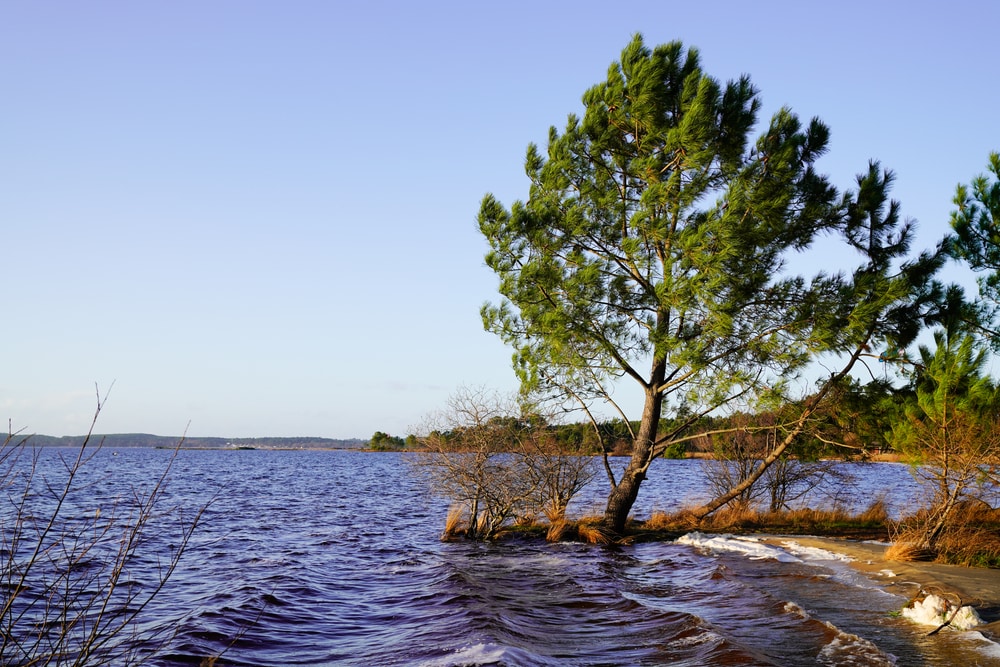 But Lake Hourtin Carcans stands out not only for its enormity. Remarkable is the fact that it has almost completely preserved its natural environment. Its white sand dunes, surrounding forests and wild marshes add undeniable charm. Therefore, it is one of the most beautiful lakes in France for swimming! You can also enjoy plenty of water activities in the summer.

So, ready to take advantage of the most beautiful lakes for swimming in France?