The 10 most beautiful cities in Chile

Chile is a champion state. Because of the peculiarities of the landscape, nature here often goes to extremes. It is the longest country (stretching from north to south for 4,600 kilometers),

with the driest desert in the world (the Atacama Desert has had no rainfall for centuries),

the world’s highest lake (the reservoir in Ojos del Salado is 6,390 meters above sea level). There are a lot of “most-true” places and sights, and an ordinary vacation will not be enough to see them all. We have chosen the most interesting: 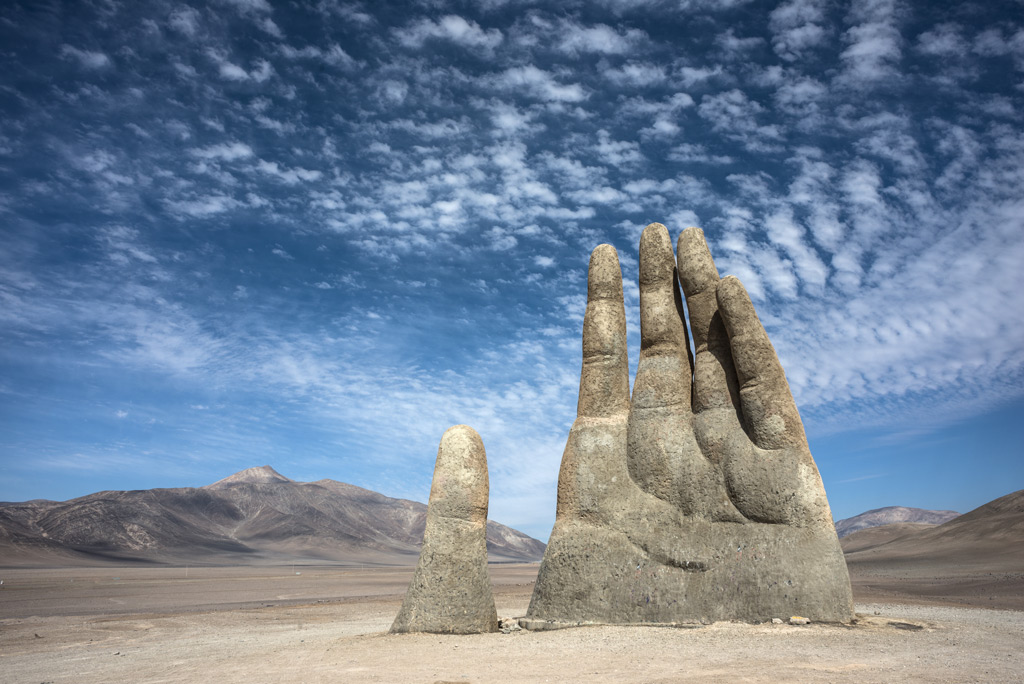 1. The hand of the desert

In Chile’s Atacama Desert, 75 km south of the town of Antofagasta, is a monument, which the lonely traveler least expects to meet there. A monument to the despair and loneliness of man in the sands, the Hand of the Desert, was erected here in 1992 by sculptor Mario Irarrazabal. If you bury the concrete giant in the sand, this is the gesture he makes to say goodbye to the world. Going to see the sculpture (tourist groups are brought here from Antofagasta),

Do not forget that in the desert for a few tens of kilometers around there are no McDonald’s or toilets. The hand of the desert is the only thing that reminds us of the presence of man here. 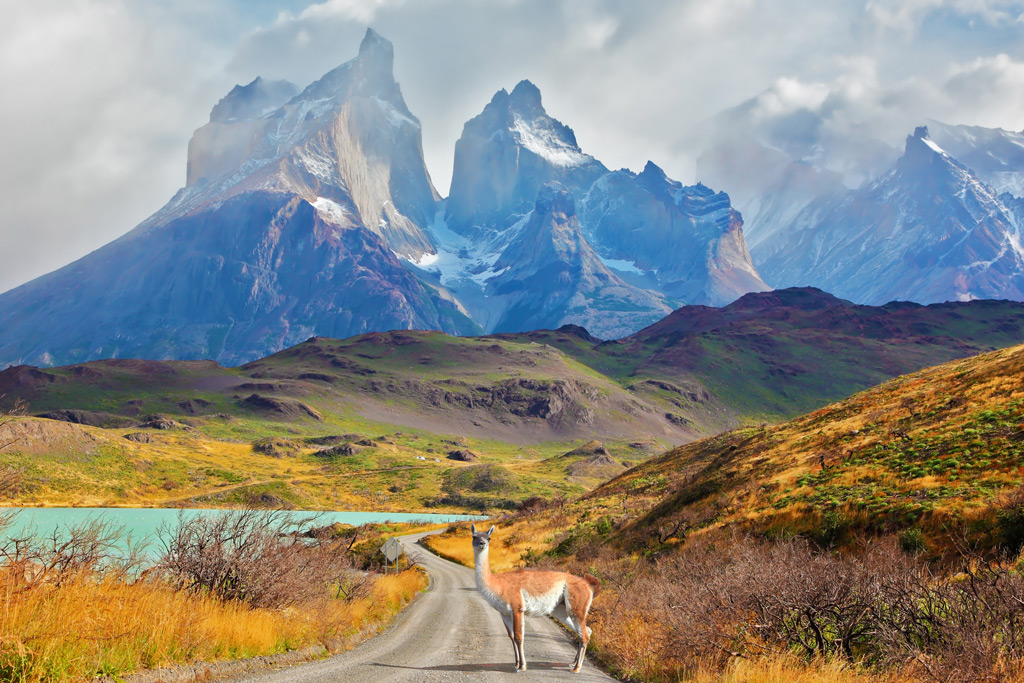 If the Hebrew God had to land Eden a second time, he would choose Torres del Paine. In 1978, a UNESCO commission recognized the Chilean national park as a biosphere reserve. It seems to be a collection of the most beautiful pieces of nature from all over the world: mountains and forests, glaciers and fjords, springs and lakes. There are several multi-day hiking trails in the park – Torres del Paine is Chile’s most visited tourist destination.

3. The largest swimming pool in the world

Imagine a soccer field filled with water. Multiply by ten. You get the world’s largest outdoor swimming pool. San Alfonso del Mar is located 100 kilometers west of the Chilean capital Santiago. One kilometer in length, 77 thousand square meters of area – in a pool of this size can not only swim, but also sail. Which the Chileans do: in San Alfonso del Mar, anyone can rent a catamaran or yacht and sail on the smooth, like a mirror, the water. Despite the fact that the water for the pool is taken from the Pacific Ocean, it is not salty and is so transparent that the bottom is visible at any point. 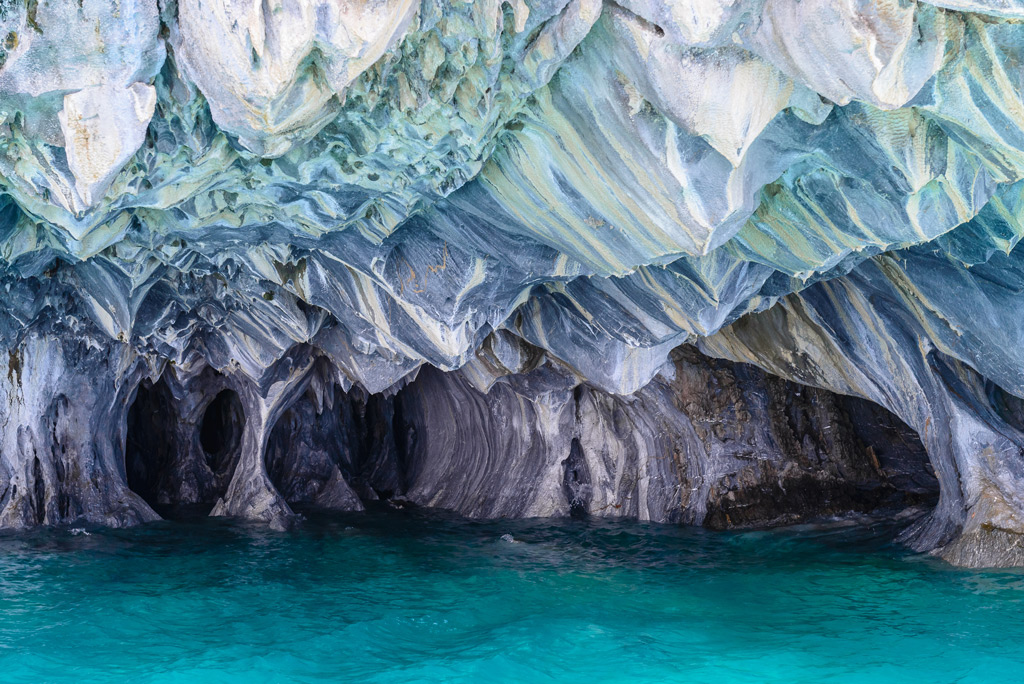 Not far from the village of Chile Chico, 1,500 kilometers from the Chilean capital, is the best place in Chile (and maybe in the world) for kayaking – the Marble Caves or Marble Cathedral on Lake Carrera. In fact, the walls of the caves, which form a winding labyrinth in the rocks of the peninsula, are not marble, but consist almost entirely of limestone. However, the glare of water on the blue vaults creates the full impression that you are floating inside a fabulous marble palace. The caves can be reached by boat, but deep into the labyrinth can only be reached by small boat or kayak. 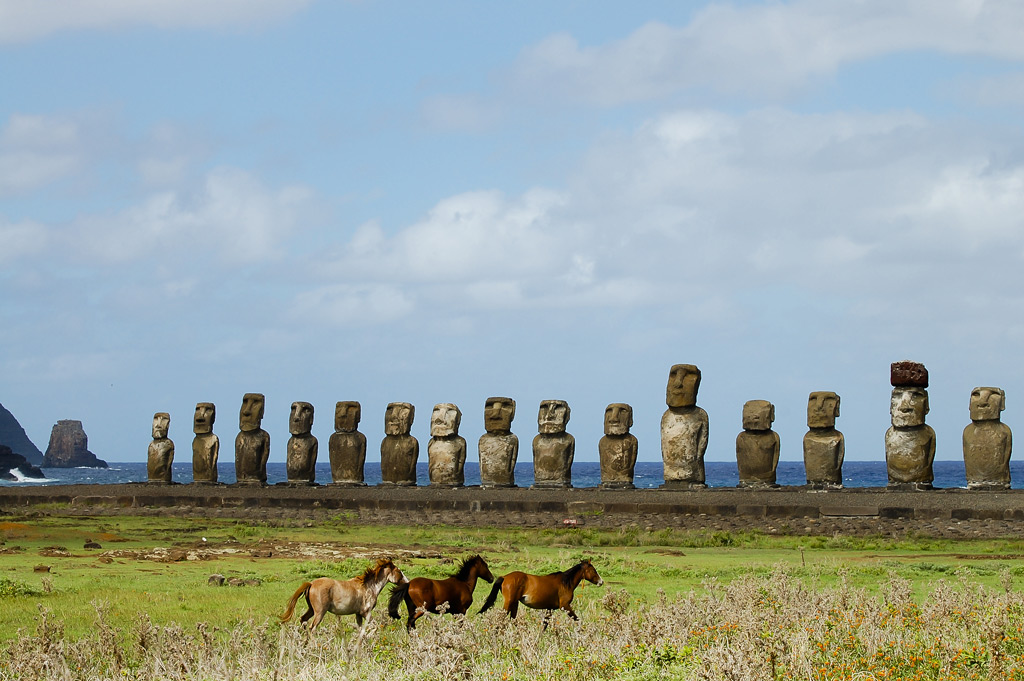 Welcome to the middle of nowhere: Easter Island is the most remote inhabited island from civilization. From the coast of Chile to the island is more than three and a half thousand kilometers. Nature has deprived the island of a variety of plants and animals. It is home to a couple dozen species of seabirds and little plants, except weeds and mulberries. However, travelers do not come here for the beauty, but for the mystery.

Easter Island is known primarily for its stone statues – Moai. Ten- and fifteen-meter statues in the form of human heads turned with the backs of their heads to the sea, and the nose into the depths of the island. Judging by the ruins of the ancient quarries, the statues were made of pressed volcanic ash in the center of the island. Scientists still don’t know how they were brought to the coast (some of the statues weigh over 200 tons). 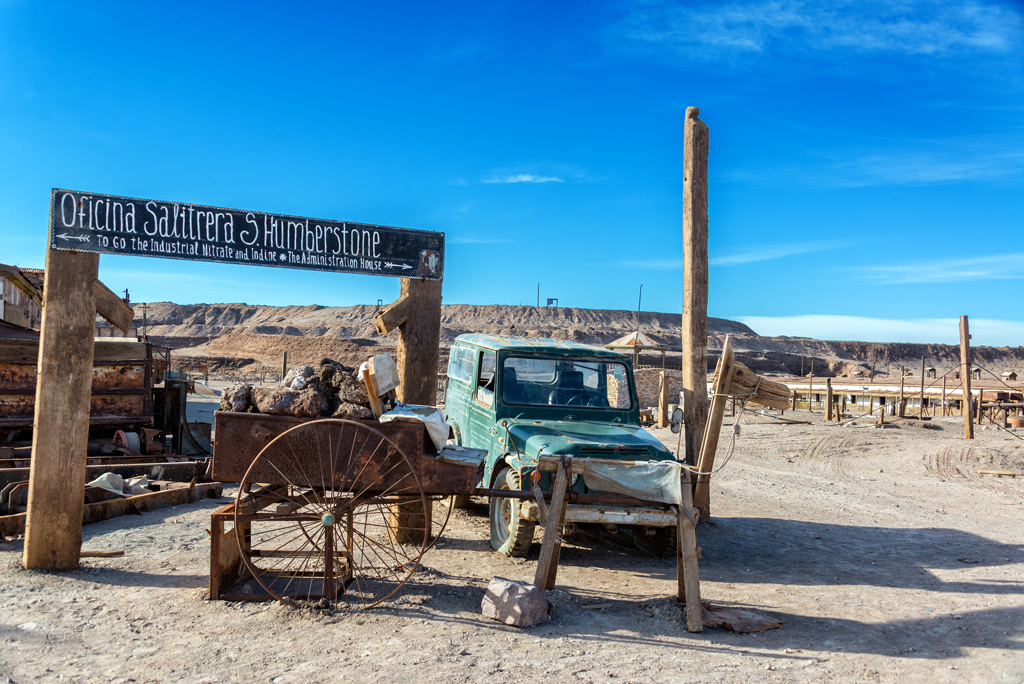 6. The ghost town of Humberstone.

In northern Chile, in the middle of the desert, fifty kilometers from the nearest settlement (the town of Iquique) is the abandoned town of Haberstone. The town was founded in the late 19th century, when a saltpeter deposit was found here. First a mining village, then a town with a theater, church and railway station – Humberstone quickly grew. And just as quickly emptied out when the saltpetre life dried up. Deprived of their livelihood, people gradually left the town, leaving behind their homes with their accumulated possessions. Even today, you can go into any abandoned house and rummage through the old chests in the hope of finding some valuable souvenir. 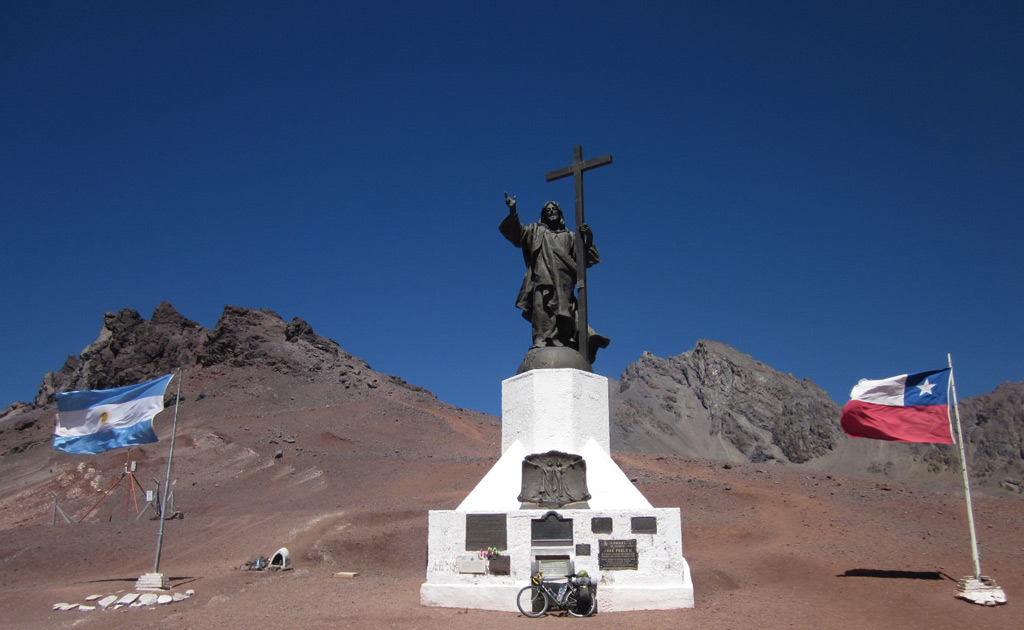 One of the rare examples where religion unites. The Andean Christ, a monument that was erected 100 years ago on the Bermejo Pass in the Andes, ended the war between Chile and Argentina. In the early twentieth century, the two neighboring countries argued over the status of their border territories. The dispute could have ended in war, but ministers of the church intervened. A local bishop suggested that a monument be erected on the border as a symbol of friendship and reconciliation. Several thousand Chileans and Argentines gathered for the opening ceremony of the monument. The military of the two countries also arrived to fire a ceremonial salute. Thus Chile and Argentina concluded a peace agreement. 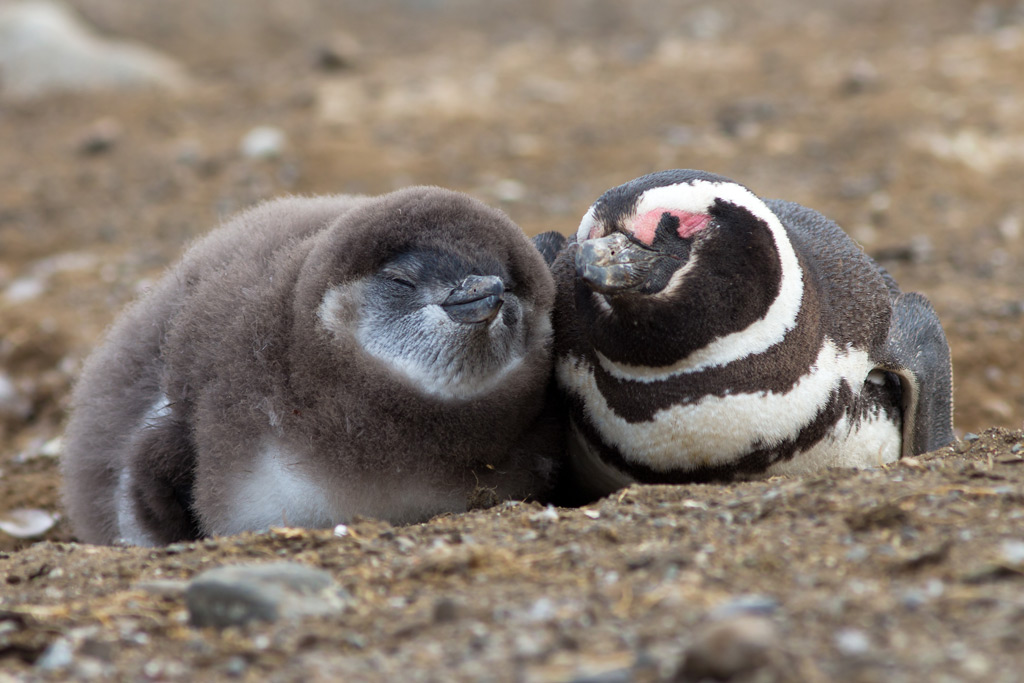 8. The penguin colony on the island of Magdalena

This is probably the only place on Earth where anyone can see so many penguins in one place at one time. Magdalena Island is located in the Strait of Magellan, near Punta Arenas. Every year in late October, nearly 50,000 pairs of penguins make their way here to breed. By February, the island is covered with a solid layer of penguins, like black snow. The penguins go about their business and are not at all afraid of the tourists who have come here to see them. You can get to the island as part of a tourist group on the ferry (2 hours one way). 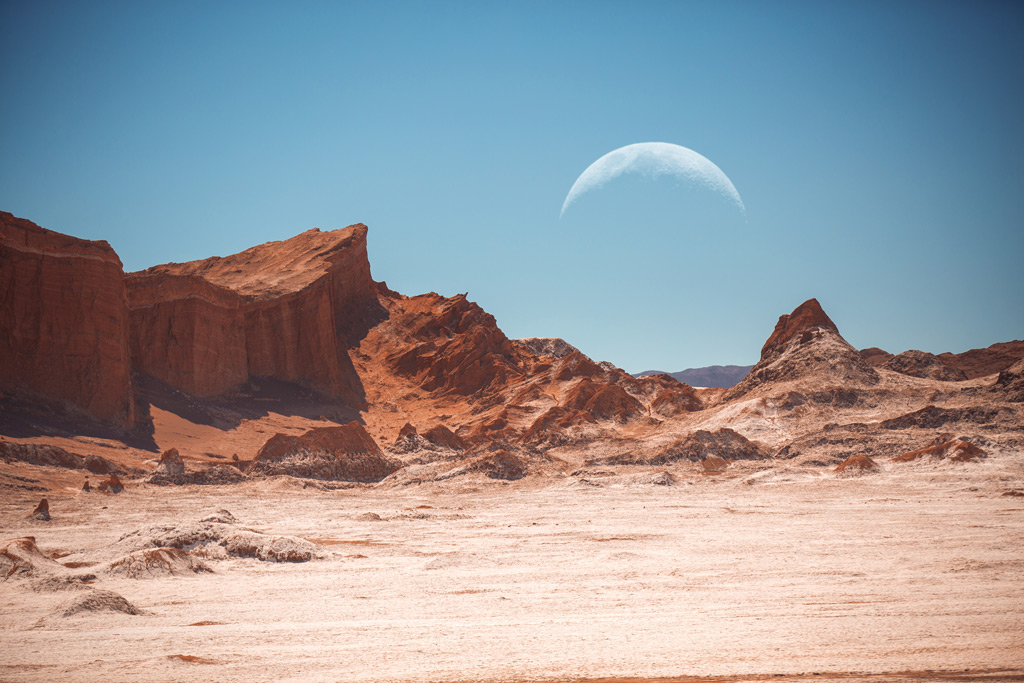 If you drive 30 kilometers away from the town of San Pedro toward the center of Atacama, the driest desert in the world, you can take a walk through the Moon Valley. Moon Valley is the name given to the bizarre landscapes of this part of the desert for their resemblance to the lunar surface. Water and winds have been grinding the rocks and sand for thousands of years, and the white color of the salt lakes gives the valley even more resemblance to the cosmic landscape.