Shopping centers have never taken part in the struggle for the height of the steeple. They have a different criterion of success – the area occupied by tenants. The larger it is, the higher the profits. Based on data from public sources, CIAN has made a rating of the largest shopping centers in Europe. 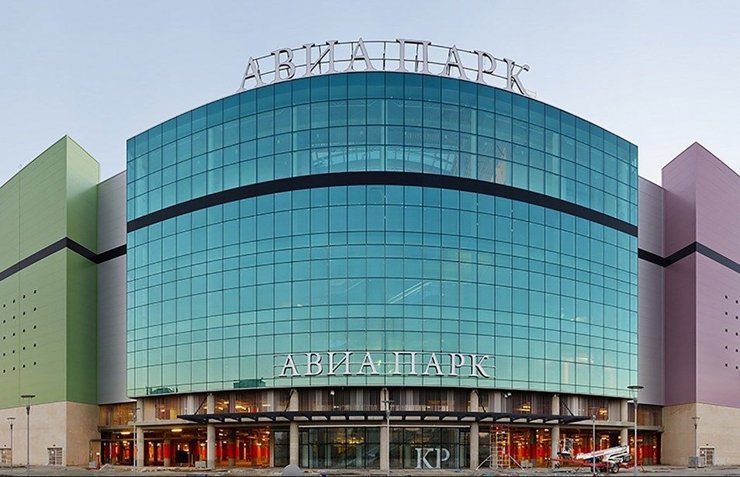 More than 300 world brands are presented in Aviapark. Among the key tenants are Auchan, OBI, Hoff, Stockmann. The food court includes more than 40 cafes and restaurants. The attraction points of the entertainment zone include a large skating rink open all year round, a 17-screen movie theater and a fitness center. In addition, the only one in the capital, KidZania children’s amusement park is located here – it is almost a real “city” with the streets, stores, banks, museums, the Grand Theater and a model airplane, where children may try on the roles of a fireman, a scientist, a pilot or an actor. The park covers an area of 10 thousand square meters. 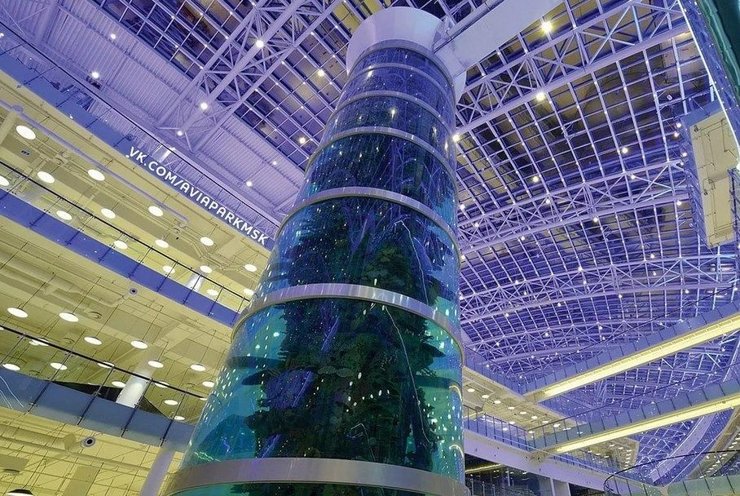 The attention of guests is attracted by a vertical aquarium 27 m high and 6 m in diameter, one of the largest in the world. The aquarium contains about two and a half thousand fish.

There are about 5 million people living in the area covered by the mall. Guests arriving by car can leave their cars in a two-level parking for 5 thousand cars. Every day the largest shopping center in Moscow is visited by more than 750 thousand people.

A wide range of interesting things for children is a unique feature of the mall: a children’s playground Motor City, an amusement park Kosmic, a professional town Kidburg, Legorod, a workshop Leonardo, a children’s beauty studio Wobrazhulia. 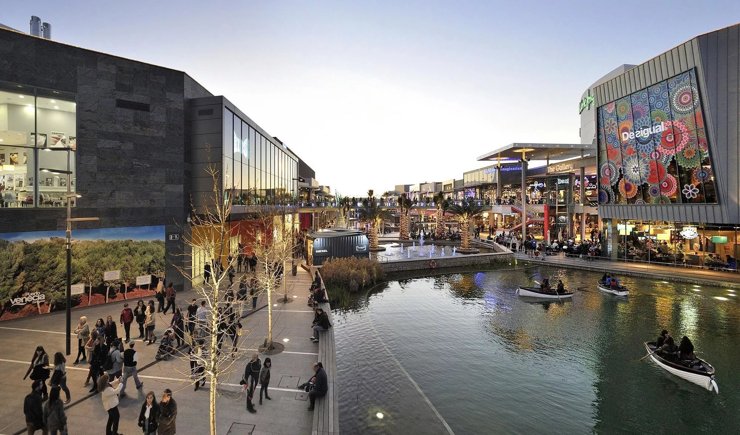 The biggest shopping mall in Spain (207,000 sq m) and third in Europe. Two phases of the mall were opened in 2007 and 2012 respectively. Creators of “Porta Venezia” approached seriously to the development of the concept of the shopping facility. It is the only mall, on which one can ride… on a boat. An artificial lake, which turns into a huge ice rink in winter, occupies more than 7 thousand sq. m. The roof of the building is like a big white wave. There is even room for a water slide, as well as a surfing school, where professional athletes teach.

There are several bridges across the lake, creating in the recreation area the atmosphere of Venice. There are restaurants and cafes along the shores of the lake. The entertainment segment includes a multi-screen movie center, climbing wall, golf courses, gym, and playgrounds.

Puerto Venecia is called “a shopaholic’s dream” – there are more than 200 stores. The key tenant is El Corte Inglés department store, which occupies an area of 40 thousand square meters. The mall welcomes more than 20 million guests a year. Shopaholics who did not have time to visit all the stores during the day can stay overnight at the Plaza Imperial hotel, located nearby. 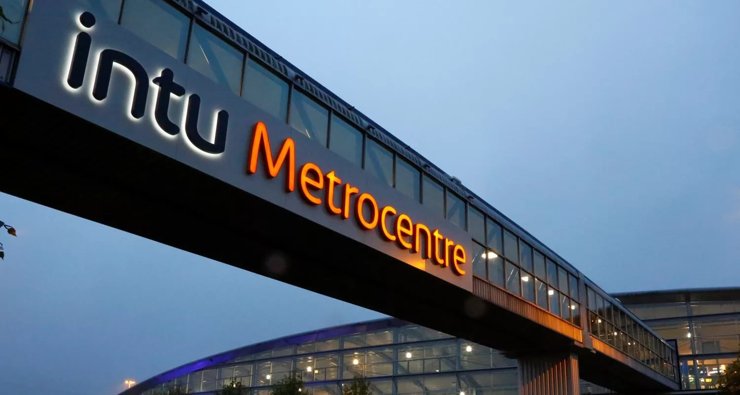 4. Intu Metrocentre – 200 thousand square meters. m. The largest shopping center of Great Britain (200 thousand square meters), located in Gateshead, in the north-east of the country, was opened in 1986. Then it was called MetroCentre. The name change took place in 2013 and followed the renaming of the company-owner Intu Properties plc. The 200,000-square-foot space houses 340 stores. The shopping center is divided into five zones: red, green, blue, yellow and platinum. A separate place is taken by the Antiques Village and the “Mediterranean Village” food court which unites 50 food outlets. The mall has six anchor tenants: Debenhams, Hose of Fraser, Marks & Spenser, Primark, Next and Maxx. The entertainment area is represented by a 12-screen Imax movie theater and Namco Funscape amusement park with air hockey, bowling, driving range, etc.

Interestingly, the construction of the shopping center was financed by the Church of England. In 1995 the mall was sold to Capital Shopping Centers (now Intu Properties plc). However, the church retained a 10% stake. Intu Metrocentre is the only shopping center in Great Britain (and possibly in the world) to have its own chaplain. Services are held on Sundays and holidays. 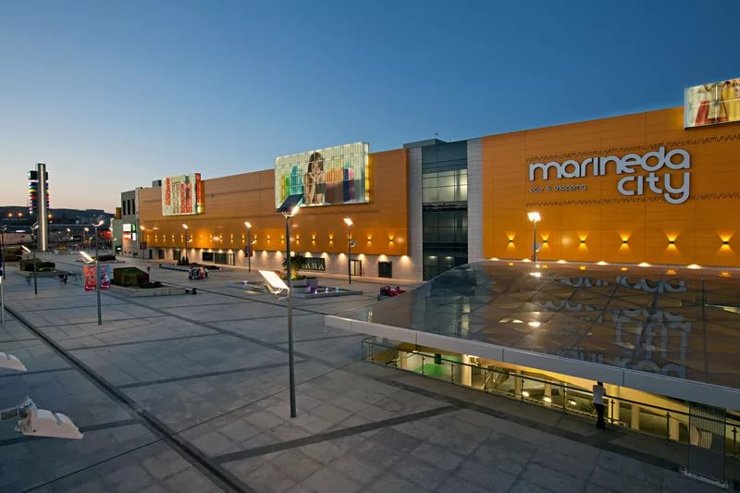 In Spanish La Coruña, at a distance of a few meters there are two shopping centers – Marineda City and Marineda Plaza. In fact they are two phases of a single facility commissioned in 2010 and 2011 respectively. The leasable area of the first is 197 thousand square meters, while the second – 101 thousand square meters. But since the buildings do not have a single roof, they are not considered as one structure, otherwise the title “the largest shopping center in Europe” would belong to them.

The shopping center was built and is operated by Invest Cos. 200 European brands are represented in Marineda City. Each year more than 15 million people visit the mall. Anchor tenants are El Corte Inglés, which occupies 45,000 square meters, and IKEA (30,000 square meters). The main entertainment is a cinema-center with huge screens and surround sound. The infrastructure of the shopping center includes a hotel Carris (6 thousand square meters) with 113 rooms. 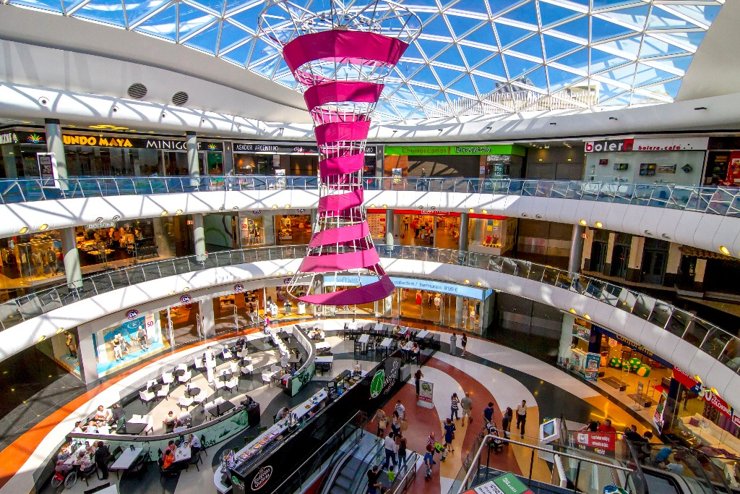 Cultural projects of the shopping center invariably attract attention. To see the bike with which Miguel Indurain won the Tour de France five times and Pele and Maradona’s boots, presented at the Legends of Sport exhibition, Spaniards are ready to overcome several hundred kilometers to the shopping center. Marineda City is known for its social projects. Among them are training programs for people who want to learn a new profession, courses to create an accessible environment for people with disabilities, etc. 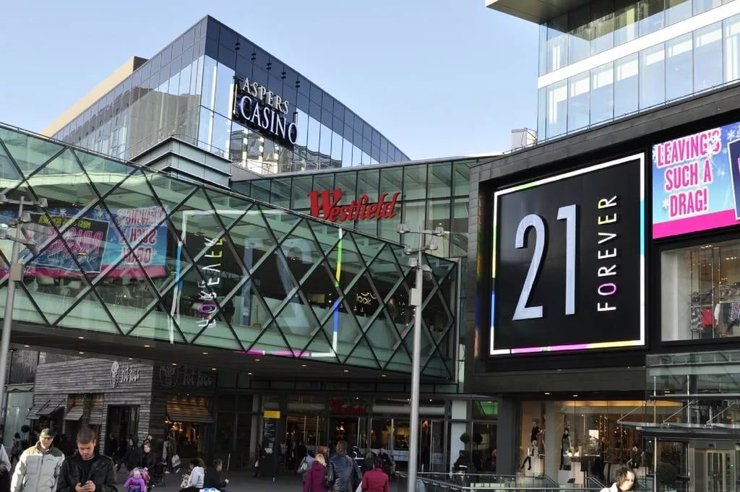 Shopping center with a rental area of 177 thousand square meters was opened in London in 2011. It is located in the modern business quarter of Stratford City. Westfield Stratford City appeared as a result of the renovation of the former industrial areas. Previously on this site was the Stratford factory and the locomotive depot. The mall is located directly at the entrance to the Olympic Park. Over 30 million people visit the center a year.

Despite the fact that the parking lot of the shopping center has 5,000 spaces, most visitors prefer to take the metro, as it is very convenient: Stratford Regional station is located directly under the building. 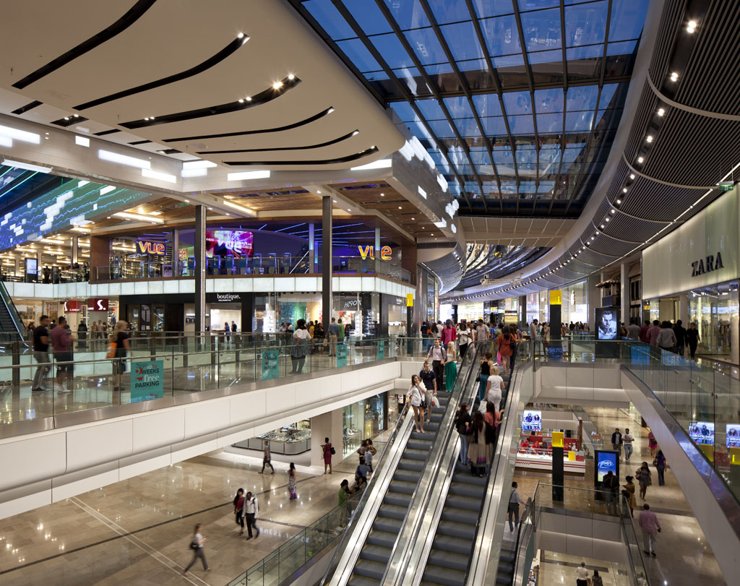 The shopping center has more than 300 stores and 70 restaurants. The key tenants are John Lewis (22,000 sqm), Waitrose supermarket (3,000 sqm) and Marks & Spencer (12,600 sqm). The main entertainment is represented by a 17-hall cinema center and the largest in England around the clock casino Aspers. The infrastructure of the mall includes two hotels: Premier Inn for 267 rooms and Holiday Inn for 350 rooms.

The shopping center opened in 2004 and became the second object under the Mega brand built by IKEA in Russia (the first was opened in Teply Stan). Moscow shopping center rating would put Khimki “Mega” with its 175 thousand sq.m. on the third place, in the European rating it had to concede some positions to western colleagues.

Today in Mega. Khimki” now has 192 stores and 35 service and entertainment brands. A food court area includes 40 coffee, restaurant and fast food outlets. The structure of entertainment is standard: a modern cinema, children’s playgrounds. There are children’s parties, performances and shooting of popular TV shows to attract visitors.

The area of the mall is 5 million people. Parking is designed for 8.7 thousand cars. 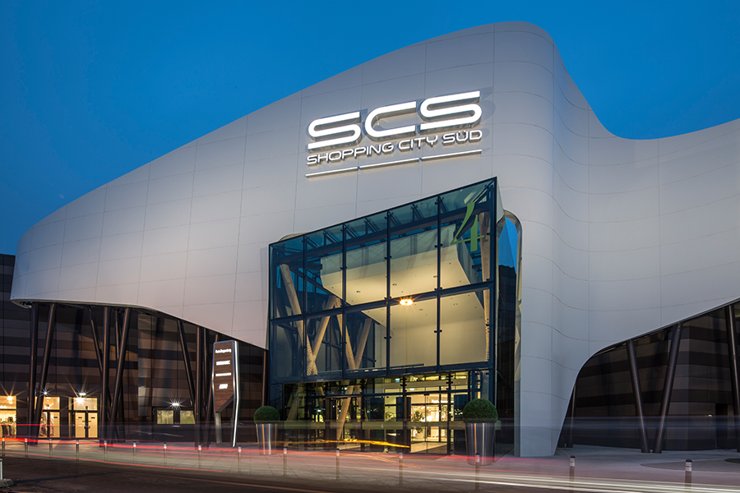 Austrian shopping center, founded back in 1976 can be considered the “grandfather” of modern malls. Shopping center with area of 173,000 square meters is located in Wesendorf, south of Vienna. It is considered not only the largest shopping center of Austria, but the main one. It is here where the residents of the country do their holiday shopping, numerous flows of tourists come here, which is not surprising: the products of the famous brands are cheaper here than in Paris or London. Each year the shopping center is visited by up to 25 million people. There are 330 stores of European brands from H&M and Benetton to Hugo Boss and Armani. It is noteworthy that the first IKEA in central Europe was opened here.

The building has two floors. The parking can hold 10 thousand cars. The management of the facility is engaged in the company Unibail-Rodamco Europe. In 2012, the shopping center has undergone a complete reconstruction. 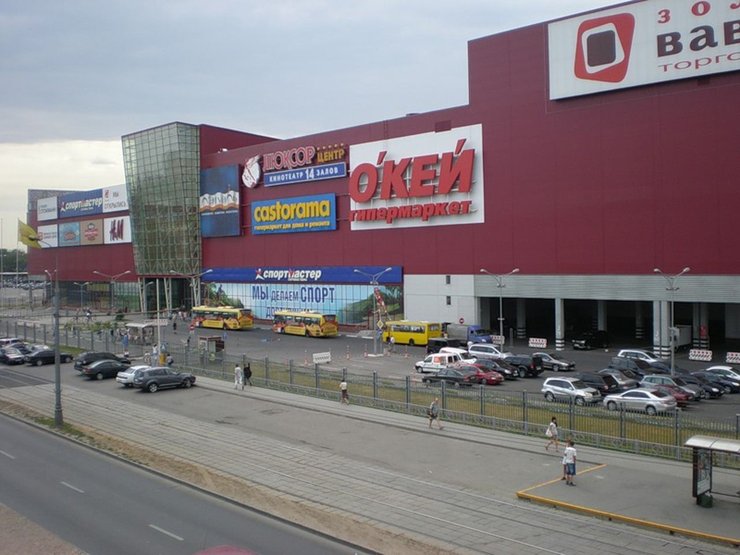 This shopping center has been operating in Moscow since 2009. It is located in the North-Eastern Administrative District, near the MCC “Rostokino”. The overall area of the mall is 241 thousand sq. m., rent area – 170 thousand sq. m. There are 380 stores, restaurants and service centers on two levels of the building. Anchor tenants are the first hypermarket O`Key opened in Moscow (15.4 thousand square meters), Castorama (10 thousand square meters) and others. One of the atriums is allocated for a gastronomic market “The Alphabet of Farms”. The attention of young visitors of the mall is attracted by a contact zoo “Jungle Call”, a family park Zamaniya, a segwaydrome and laser fights club Cosmozar. Parking in the mall can accommodate 4.8 thousand cars.

READ
5 places each of us must visit

At the end of 2017 the mall was acquired by Fort Group. The new owner plans to reconstruct the facility and change the name of the mall to “Europolis Rostokino”. It is planned that as a result of the reconstruction there will be another entrance to the shopping center – from the side of “Sviblovo” metro station, cascade escalators and stairs will appear in the central zone, there will be a place for events on the first level. There will be a redesign. 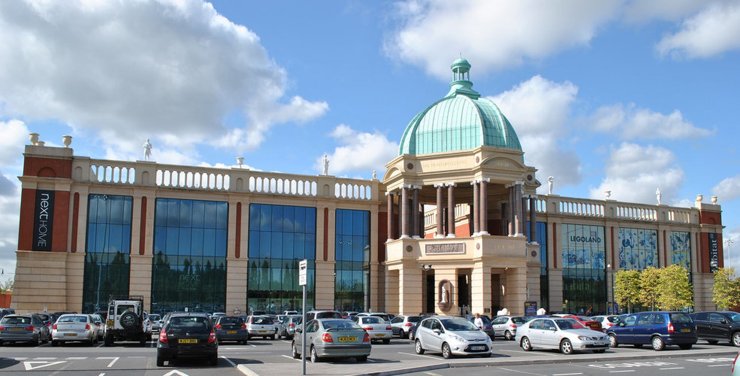 The shopping center is located in the district of Trafford, Greater Manchester, England. It was opened in 1998.

Even though The Trafford Centre is not the biggest mall in the world (153 thousand square meters), but it is one of the most luxurious – with pompous columns, marble staircases, fountains and palm trees. The main element of the decor is the largest chandelier in the world made of Japanese crystal. The intricate Baroque-like architectural style is said to be a tribute to the area’s history, dating back to the Roman era. 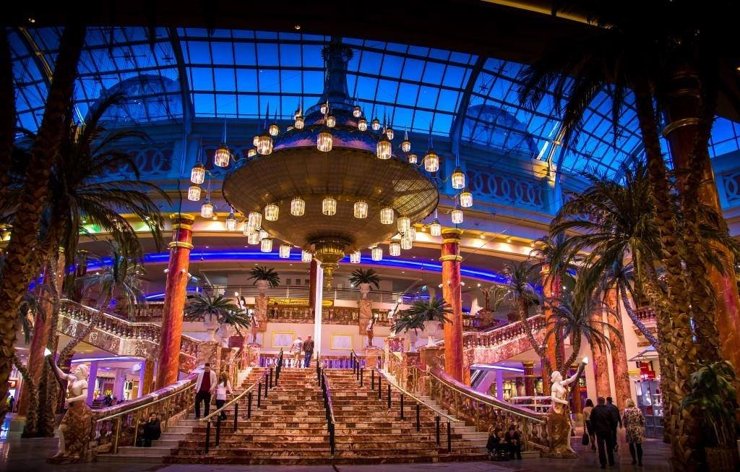 The shopping center is divided into four zones: Peel Avenue, the Regent Crescent, the Dome, and the Orient. The building is designed so that visitors can enter both the first floor and the first floor. Anchor tenants include John Lewis, Debenhams, Selfridges. The mall has a total of 230 stores. There is the most popular movie theater in England and the largest food court in Europe. Interestingly, one of the restaurants – Orient food hall – is decorated in the style of a ship, reflecting the proximity of the mall to the Manchester Canal.

The mall is owned by Intu Properties. With nearly a tenth of the population living within a 40-minute drive of the shopping center, the mall’s parking lot includes 11,500 spaces. Traffic at The Trafford Centre exceeds 35 million people a year.