The 10 creepiest abandoned ghost towns on our planet 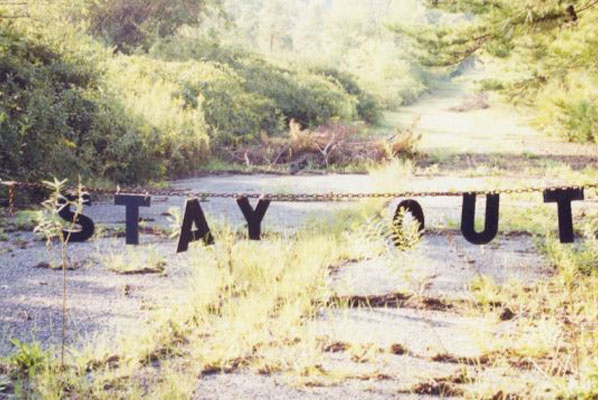 The world is full of ghost towns, abandoned settlements that appeared as a result of either economic crises or natural or man-made disasters. Some are so remote from civilization that they have become a real time machine, able to take you back to those distant times when life was booming in them. They are incredibly popular with tourists, although they can be dangerous or forbidden to visit. Here is an overview of the most incredible ghost towns in the world.

1. Kolmanskop (Namibia): a city buried in the sand 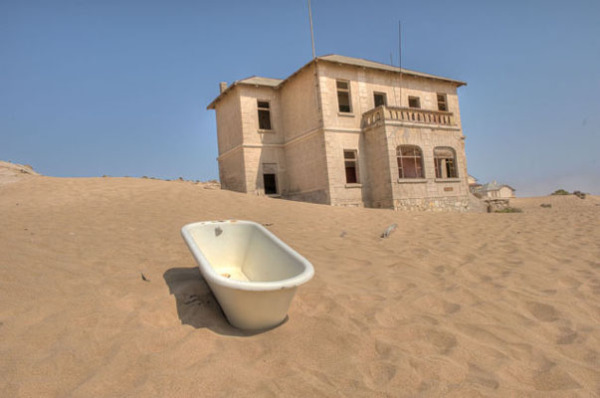 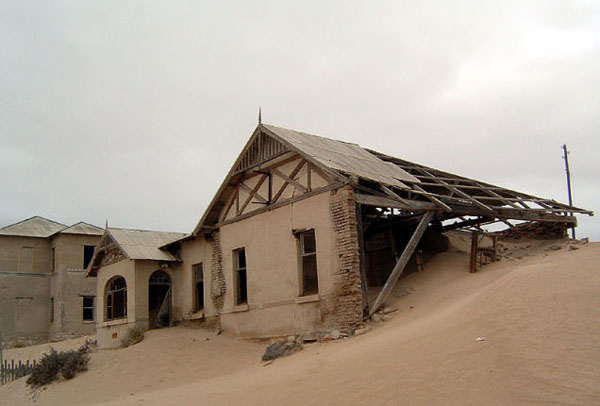 Kolmanskop is a ghost town in southern Namibia, located a few kilometers from the port of Luderitz. In 1908, a diamond rush gripped the area and people rushed to Namib, hoping to get rich. But over time, after World War I, when diamond sales plummeted, the town, which has casinos, schools, hospitals, and residences, turned into a barren sandy desert. 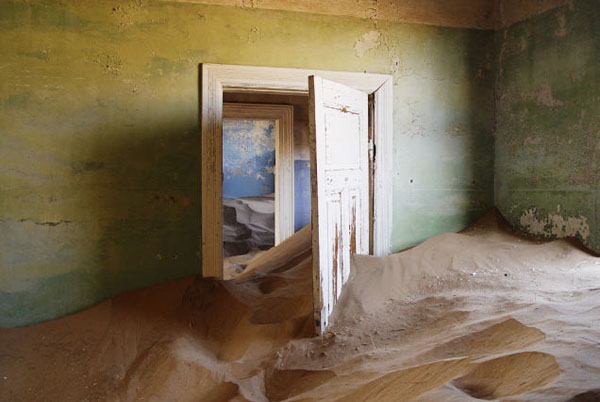 Metal structures collapsed, beautiful gardens and tidy streets were completely covered by sand. Creaking doors, broken windows overlooking the endless desert… another ghost town was born. Only a few buildings are in good condition. They still have their interiors and furniture. But most are just ruins, run by ghosts. 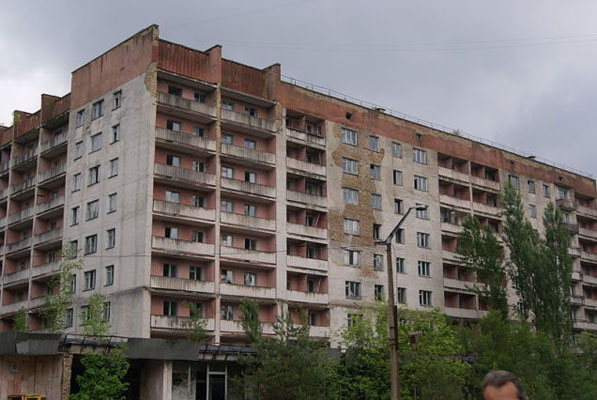 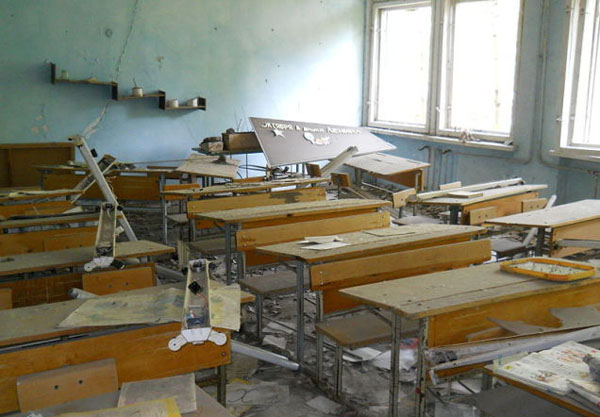 Pripyat is an abandoned town located in northern Ukraine in the “exclusion zone”. Once it was a home for workers of the Chernobyl nuclear power plant. It was abandoned in 1986 after an accident at the plant. Before the accident, the population was about 50,000 people. Now it is a kind of museum dedicated to the end of the Soviet era. 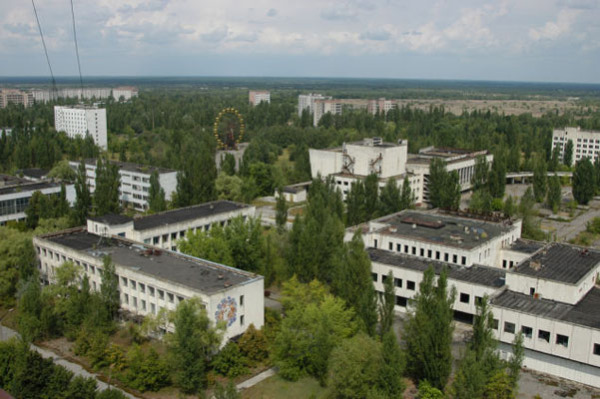 Multistory buildings (four of which were just built and not yet inhabited at the time of the accident), swimming pools, hospitals and other buildings – everything remains as it was at the time of the disaster and mass evacuation. Records, documents, televisions, children’s toys, furniture, jewelry, clothing – everything that every normal family had remained in the dead city. Pripyat residents were only allowed to take their suitcase of personal documents and clothes. Nevertheless, at the beginning of the 21st century, many apartments and houses were almost completely looted, nothing of value was left, even the toilets and those were taken out. 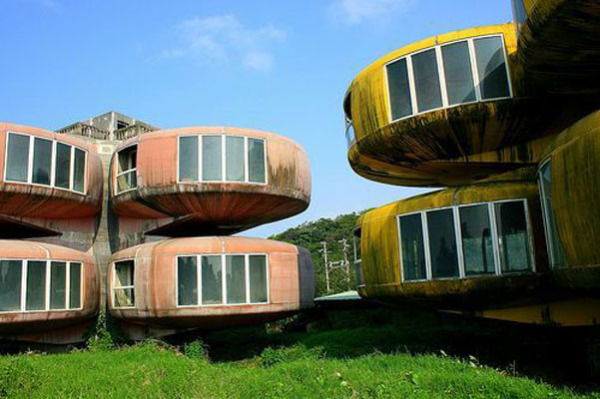 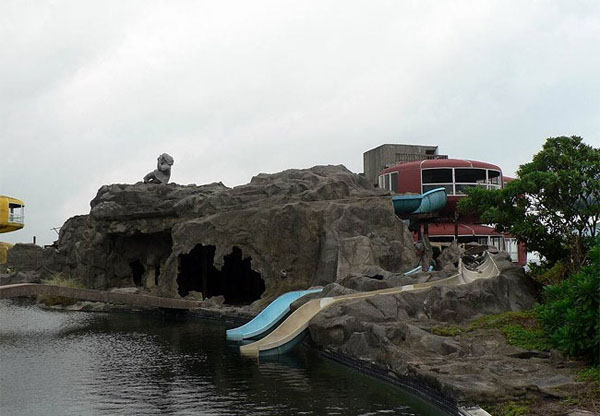 This futuristic village was built in northern Taiwan as a luxury resort for the wealthy. However, after many accidents during construction, the project was stopped. Lack of money and a desire to continue work caused it to come to a complete halt. Strange buildings in a futuristic style still stand there as a memory of those who died during the construction. There are now rumors in the neighborhood of numerous ghosts now roaming the city. 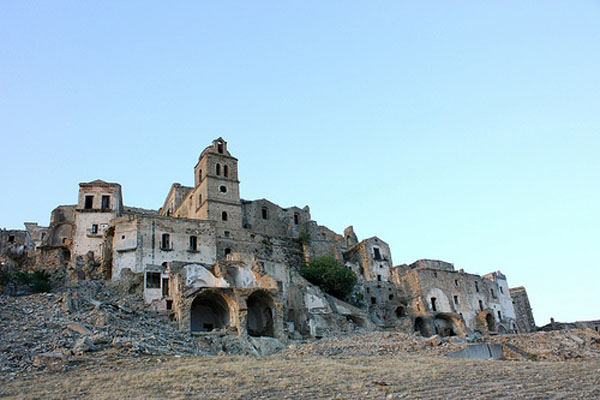 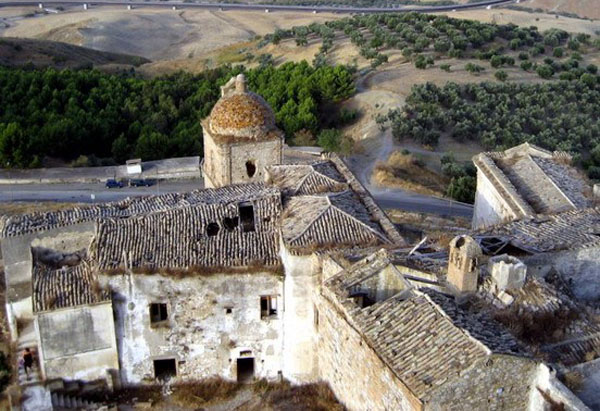 Craco is located in the region of Basilicata and the province of Matera, 25 miles from the Gulf of Taranto. Typical of the Middle Ages, the town is built among numerous hills. Its appearance dates back to 1060, when the land was owned by Archbishop Arnaldo, Bishop of Tricarico. This long association with the church has had a great influence on the town’s inhabitants over the centuries. 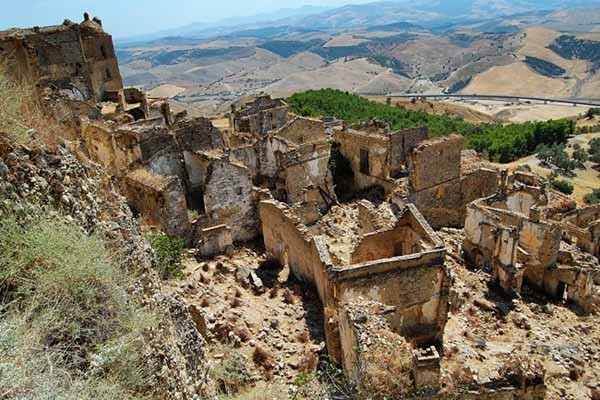 In 1891, Krako had a population of over 2,000. The residents had many problems due to poor agricultural conditions. In 1892-1922, more than 1,300 people moved from the city to North America. Earthquakes, landslides, and wars all caused mass migration. In 1959-1972, Krako was particularly affected by natural disasters, so in 1963 the remaining 1,800 residents left the city and moved to the nearby valleys of Krako Pesquiera. Today it is a stunning ruins of a medieval town, which is very popular with tourists. 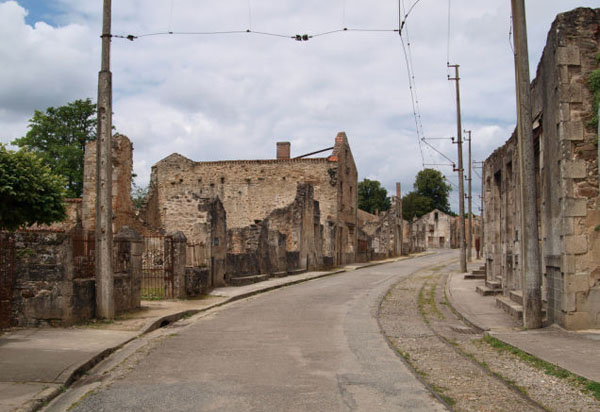 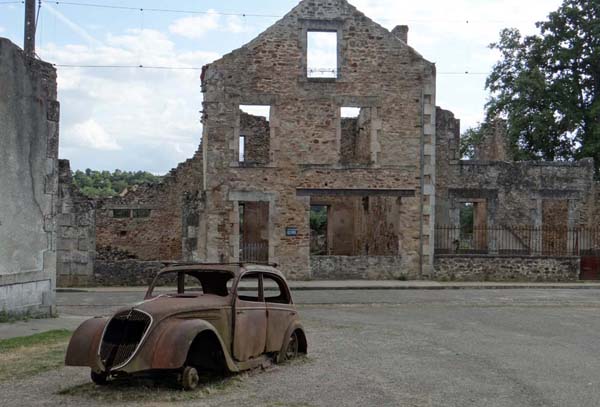 The small village of Oradour-sur-Glanc in France is the epitome of unspeakable horror. During World War II, 642 residents were killed by German soldiers as punishment for the French resistance. The Germans originally planned to attack Oradour-sur-Vaires, but mistakenly invaded Oradour-sur-Glans on June 10, 1944. According to the order, some of the inhabitants of the French town were driven by the Germans into barns, where they were shot in the legs so that they died long and painfully. Women and children were kept in the church, where they were shot. Later, the Germans completely destroyed the village. Its ruins stand to this day as a monument to all those who died, although not far away after the war a new town was rebuilt again. 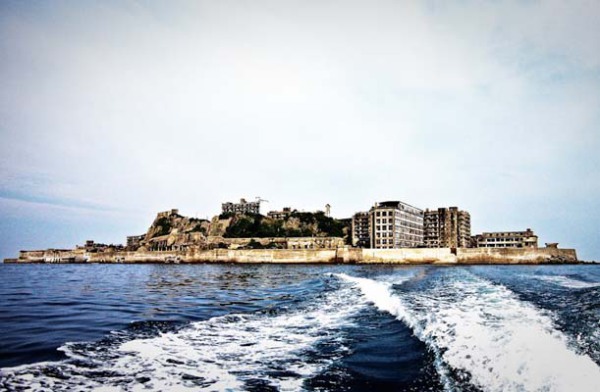 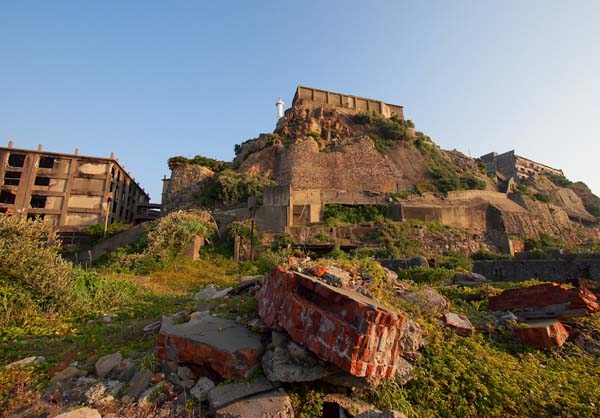 Gankajima is one of the 505 uninhabited islands in Japan. It is located about 15 kilometers from Nagasaki. It is also called Guncan-Jima or Battleship Island. In 1890 it was bought by Mitsubishi and began mining coal from the seabed. In 1916 the company was forced to build Japan’s first large concrete building. It was a multi-story house that housed workers. 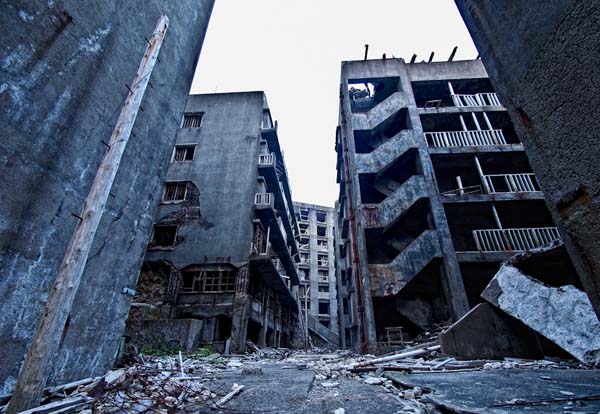 In 1959 the population of the island increased rapidly. It was one of the most densely populated islands ever recorded in the world. In the 1960s, oil replaced coal in Japan. As a result, coal mines all over the country began to close. The island was no exception. In 1974, Mitsubishi officially announced the cessation of operations. Today, the island is completely empty. It is forbidden to travel there. In 2003, the movie “Battle Royale II” was filmed here, and it was also featured in the popular Asian video game “Killer7”. 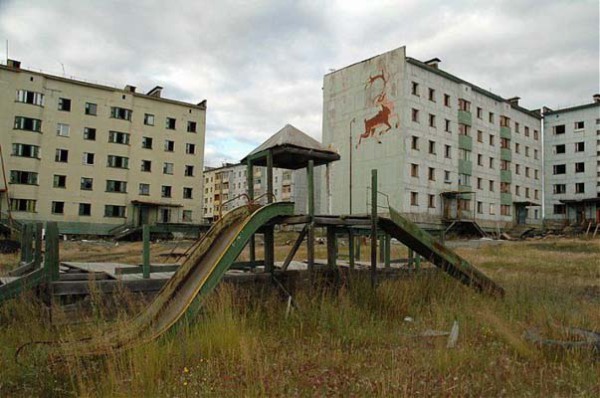 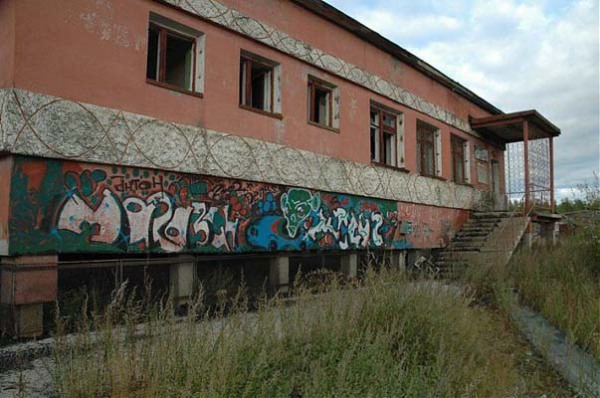 Kadykchan was one of many small Russian towns that turned into ruins after the collapse of the Soviet Union. Residents were forced to relocate in order to gain access to running water, schools, and medical care. The state relocated the townspeople within two weeks and provided them with new housing. 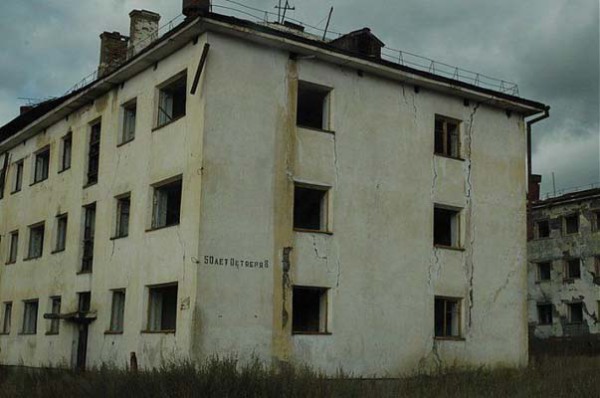 It was once a mining town of 12,000 people. Now it is a ghost town. During the evictions, residents left their belongings in the houses in a hurry, so now you can find old toys, books, clothes and other things there.

8. Kowloon (China): a city without laws 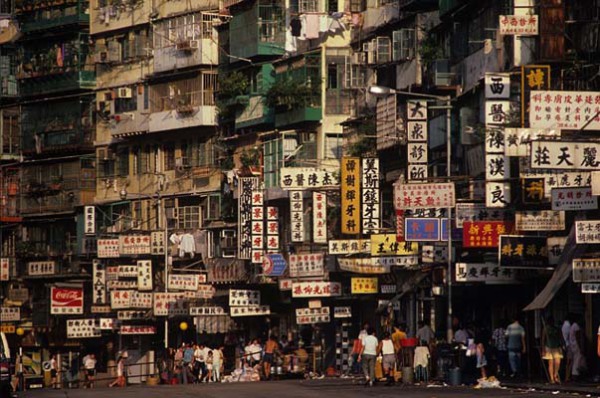 The city of Kowloon was located outside of Hong Kong during British rule. A former watchtower post was established to protect the territory from pirates. During World War II it was occupied by Japan, and after its surrender it passed into the hands of the squatters. Neither England nor China wanted to be responsible for it, so it became an independent city without any laws. 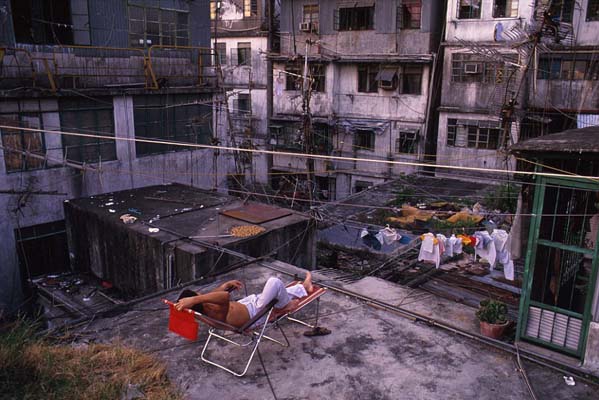 The city’s population prospered for decades. The inhabitants built veritable mazes of corridors over streets that were littered with junk. The buildings became so tall that sunlight could not reach the lower levels and the entire city was lit by fluorescent lights. It was a veritable center of lawlessness – brothels, casinos, opium dens, cocaine parlors, food courts serving dog meat – all operated unimpeded by the authorities. In 1993, the British and Chinese authorities jointly decided to close the city as its anarchic finery began to spiral out of control. 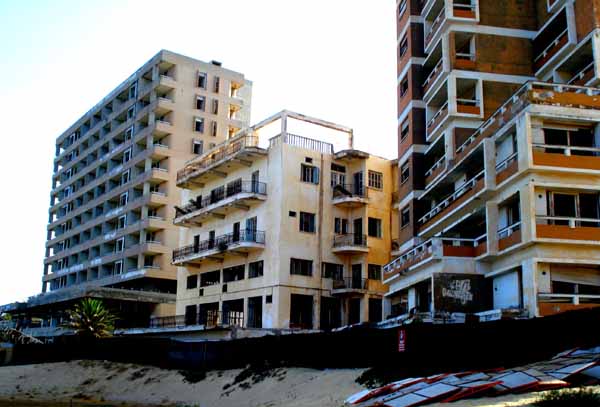 Varosha is a settlement in the unrecognized republic of Northern Cyprus. Until 1974, when the Turks invaded Cyprus, it was the modern tourist area of Famagusta. Over the past three decades it has become a real ghost town. 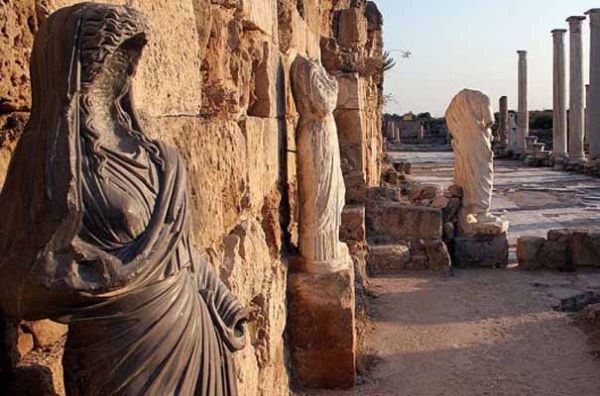 In the 1970s, the city was very popular with tourists. Every year their number was growing, so new high-rise buildings and hotels were built. But when the Turkish army gained control of the region, they fenced off access to it. Since then, all but Turkish military and United Nations personnel have been banned from entering the city. Annan’s plan was to return Varosha to the Greek Cypriots, but that did not happen because they rejected it. Since there have been no repairs over the years, the buildings are gradually falling apart. Metal structures are rusting, plants are growing on the roofs of houses and destroying sidewalks and roads, and sea turtles have been spotted nesting on deserted beaches. 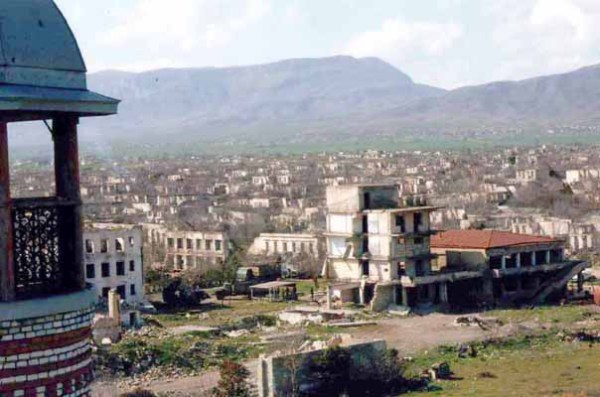 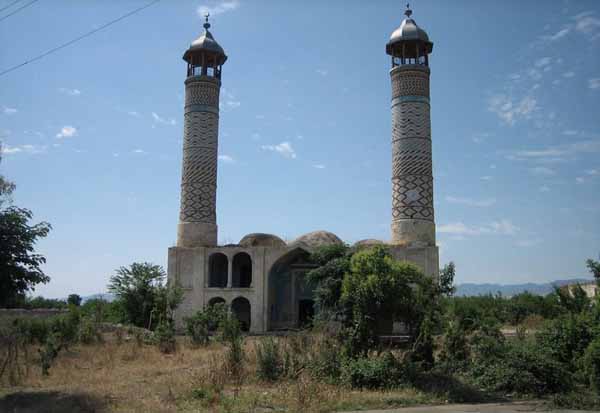 The eerie city of Aghdam was once a thriving city of 150,000 people. In 1993, it “died” during the Nagorno-Karabakh war. The city never had a terrible battle, it simply became a victim of vandalism during the Armenian occupation. All the buildings are empty and dilapidated, only the mosque, covered in graffiti, remains intact. The inhabitants of Aghdam have moved to other parts of Azerbaijan, as well as to Iran. If there is no strength to look at the dead cities, then it is better to go on a trip to the colorful capitals of the world.