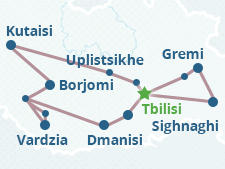 The program of this tour to Georgia will introduce you to one of the most important sections of the Great Silk Road. Many cities and monuments of the country still bear the spirit of the distant past, when caravans loaded with various goods moved through them. Sights such as the royal caravanserai, Narikala, Gremi and Khertvisi fortresses – important points on the routes of the Great Silk Road, as well as contemplation of picturesque Georgian landscapes and tasting of Georgian home-made wines await you.

After breakfast, you will visit the Metekhi Church and the monument to Tbilisi’s legendary founder King Vakhtang Gorgasali. Then take a cable car up to Narikala Fortress, where you will see a breathtaking panorama of Tbilisi. The fortress and its surroundings were considered the most important trading post and resting place on the Great Silk Road. Walk down to the sulfur baths and past the only mosque in Tbilisi, and you’ll find yourself among the cozy cafes and souvenir shops of the Chardin district. The narrow streets with wine cellars and art galleries preserve the spirit of Old Tbilisi. They will lead you to the Temple of Sioni (named after Mount Zion), the “Royal Caravanserai” (1672), the 6th century Anchiskhati Basilica, and the unique clock tower of the Puppet Theater by Rezo Gabriadze. Walking the pedestrian Peace Bridge to the left bank of the river Kura you will visit the park of bizarre sculptures Rike. The tour ends with a visit to the Silk Museum.

In the morning drive to the region of Kakheti (Eastern Georgia), which is considered the birthplace of Georgian wine. The first point on your way will be Sighnaghi. Your special attention will be attracted by its ancient fortress walls and 28 watchtowers, which are preserved till nowadays. After a short tour of Sighnaghi you will go to the tasting of traditional Georgian wine. Then you will visit the Alazan valley, where you will see the royal fortress of Gremi, an architectural monument of the 16th century. Gremi was one of the busiest cities on the Great Silk Road: in addition to the residence of the Georgian kings and the citadel, the city had a large market and a parking lot for trade caravans. Short tour of Telavi, the center of the Kakheti region. Arrival in Tbilisi. Overnight in hotel.

After breakfast you will travel to the ancient capital of Georgia – the city of Mtskheta. On the way walk up to Dzhvari monastery, which offers fabulous views of the ancient city itself and the confluence of two rivers, the Aragvi and Mtkvari (Kura). Next you will visit Svetitskhoveli Cathedral in Mtskheta. The tour will continue with homemade wine tasting and lunch in a traditional Georgian house in the village of Chardakhi. After lunch you will travel to Uplistsikhe – a city carved into the rocks in the first half of the first millennium BC. Uplistsikhe has been a crossroads of many trade routes on the Great Silk Road for many centuries: at its peak it had more than 20,000 inhabitants and was the center of pagan culture in the region. Departure to Kutaisi (capital of western Georgia). Arrival in Kutaisi. Overnight in a hotel.

After breakfast, sightseeing tour of Kutaisi. The main Georgian section of the Silk Road passed through the territory of lower Svaneti. The road passed through “Kotatisium” – modern Kutaisi, the second largest and most important city in Georgia. Visiting the Gelati monastery, as well as the famous “Prometheus Cave. Departure to the city of Akhaltsikhe. On the way stop in Borjomi – one of the most famous places in Georgia. Walk in Borjomi Central Park. Arrival in Akhaltsikhe. Overnight at hotel.

Morning visit to Rabat Fortress in Akhaltsikhe. Inside the walls of the fortress are a church, mosque, synagogue, a small park, historical museum, various stores, hotel and Registry Office. Stop at Khertvisi fortress, which already in the 10th century was known as one of the strategic citadels on the trade routes of the Silk Road. Then you will visit Vardzija – a unique cave town, where an ancient monastery and wall paintings of the XII century are preserved to this day. Return back to Akhaltsikhe. Overnight at hotel.

In the morning you drive to Tbilisi. On your way you pass Lake Paravani and Tsalka water reservoir. Visit to the town Dmanisi. In the 9th century Dmanisi was the center of the Arab state of Dumanusi Emirate and an important trading center on the Great Silk Road. During excavations at the end of the last century and the beginning of this century in the territory of the city was discovered skull, presumably belonging to the first man in Europe (1.6 million years old). Then visit Bolnisi Zion, built in 478-493 This is the oldest church in Georgia that has survived to this day. The cathedral is also known for the ancient inscriptions mentioning the names of Bishop David of Bolnisi, as well as two Sassanid kings, Peroz I and Kavadha I. These inscriptions are one of the oldest historical documents confirming the existence of the Georgian language at that time. Arrival in Tbilisi. Overnight at the hotel. *Dmanisi archaeological site is open from May 1 to October 31, at other times the site is closed to visitors.