Taormina sights – what to see? 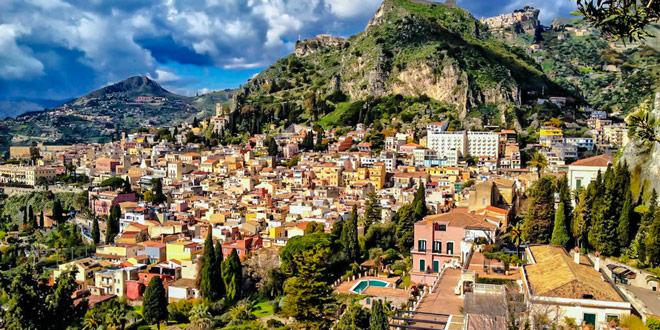 Writers and famous people of the past have left only positive comments about Taormina. For example, the Frenchman Guy de Maupassant, exclaimed that this resort is worthy of exceptional attention.

“Even if fate gives you only one day in Sicily, spend it in Taormina!”

The writer was undoubtedly right, the journey up the mountain road into the heart of the city to the main sights is already a pleasant adventure in itself. The slope of the road is not that steep, the place you are looking for is 200 meters above sea level. The rich greenery, colored with colorful strokes of flowering branches, makes a great impression. So does the glare of the sun reflected in the azure waters of the Ionian Sea.

What is worth seeing in Taormina?

In the center of the city, travelers have the chance to visit the local Duomo, the Cathedral. Built in the 15th century, this cathedral replaced an early medieval church dedicated to St. Nicholas the Wonderworker. St. Nicholas became the patron saint of the new Duomo, so the full name sounds like the Cathedral of St. Nicholas (Dom San Nicolò). Compared with the famous Duomo of Florence and Rome, the local cathedral makes a modest impression. But for the inhabitants of the city it is a symbol of spirituality and faith. 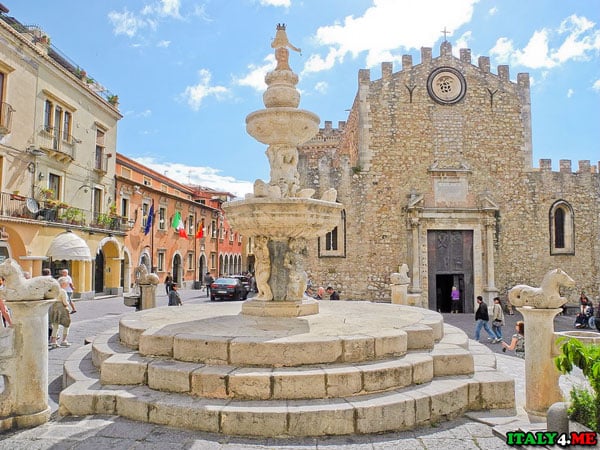 In the Cathedral Square, just in front of Dom San Nicolò, there is a picturesque fountain. The three-tiered pedestal is surmounted by a curious figure – a crowned centaur. This unusual character is the symbol of Taormina.

A leisurely stroll through the city will bring the traveler to the April 9th square. Against the backdrop of a small open space covered with colorful tiles, mountains rise majestically. When one manages to tear his eyes away from this breathtaking panorama, the viewer is surprised to find medieval buildings in the foreground.

READ
Traveling in Taiwan from a tourist's perspective

The Torre dell’ Orologio, the clock tower standing on the side of the square, reeks of austere strength and antiquity. It was built in the 12th century in a typical fortification style. It is now somewhat enlivened by the decorations of the adjoining restaurant. The nearby church of St. Augustine (San Agostino) looks more ornate. It was also built at the beginning of the XV century as a symbol of the deliverance of the city from the plague. The church of St. Augustine has not been fulfilling its direct function for a long time, but has been serving Taormina as a library. Opposite it stands another small church dedicated to St. Giuseppe (San Giuseppe).

Near the Roman Odeon, tourists can admire the church of St. Catherine of Alexandria. The building dates from the XVII century and is best known for the statue of St. Catherine of Alexandria, built at the entrance of the church. The Anglican Church of St. George, built at the beginning of the XX century, is very much in harmony with the landscape of Taormina. The church, dedicated to St. George, stands at the edge of a terrace that offers breathtaking views of the sea and mountains. 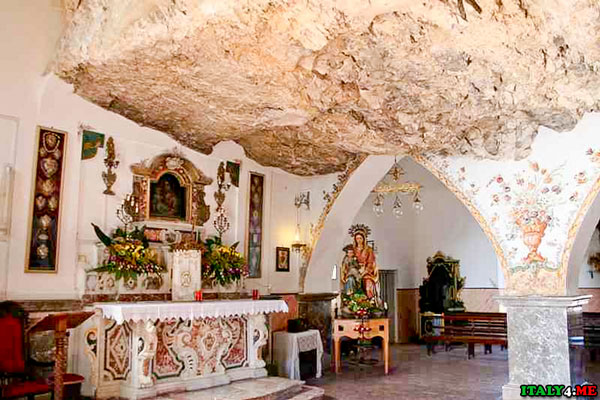 Another curiosity with a religious theme lies high in the mountains. The Church of Our Lady in the Rock (Madonna della Rocca), partly uses a niche in Mount Tauro. It was built in the middle of the XVII century and since then, it has attracted pilgrims and ordinary tourists alike.

It is worth noting that most of Taormina’s architectural landmarks are modest in size. This fact is true for religious buildings, but it also applies to secular buildings. The whole city is filled with spirituality and ineffable coziness. Any building would be lost against the backdrop of the Apennines mountain range. The inhabitants of Taormina sensitively sensed this moment and did not even try to influence the surrounding people with their size, they capture the soul with their simplicity and elegance.

Palazzo Corvaggio is in the center of the city and is the city’s calling card. The Arabs, who were active in the city during the 10th and 11th centuries, had a hand in its construction. The palace underwent extensive reconstruction in the 15th century. It was specially converted for the needs of the Sicilian Parliament. The palace owes its name to the most famous and oldest family that ruled the city. The architectural style of the palace is hard to describe in one word. The whimsical combination of Arabic, Romanesque and Norman styles brings unforgettable accents.

READ
What to do in Bulgaria: TOP-13 ideas for the most interesting leisure activities 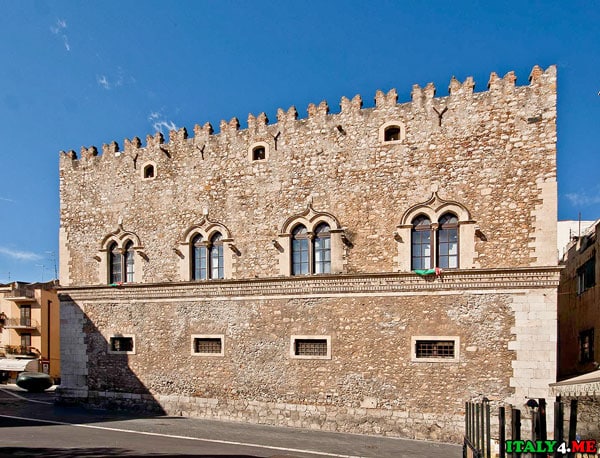 The central tower of the Palazzo Corvaggio is a unique example of Arabic architecture on the territory of modern Europe. The oriental arches of the entrance portals and windows inevitably bring to mind the fairy tales of “1000 and one nights”. The patterned crown of the Arabian tower looks fragile compared to later constructions. 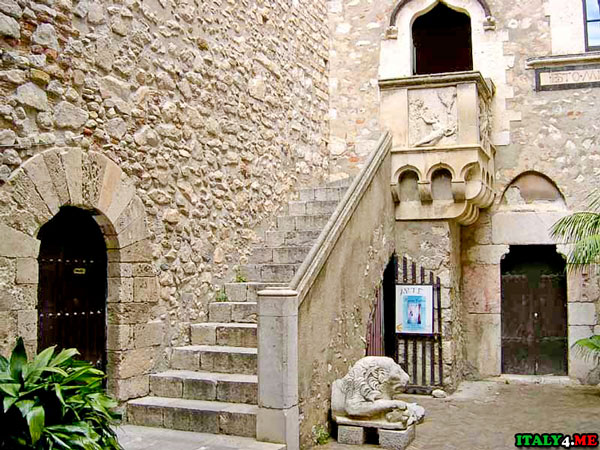 The left wing of the castle dates back to the medieval period. It is decorated with a staircase decorated with relief paintings of biblical themes. The right wing is the newest part of the palazzo. It served for meetings of the Parliament. In the middle of XX century this part of the castle was reoriented for the headquarters of several tourist firms.

Palazzo Duca di Santo Stefano is the residence of the Spanish Duke of Santo Stefano in Taormina. The palace was commissioned by the Duke of De Spuches in the 14th century. Although the building is influenced by Romanesque architecture, the final impression is given by its Gothic elements. The twin arches of the windows are executed in a typically Gothic fashion. The elongated lancet arches are decorated with symbolic hexagrams. At the very roof of the building is a multi-layered frieze of contrasting stones. Chains of black pieces of lava and white stone give the Palace of the Duke of Santo Stefano a solemn appearance. 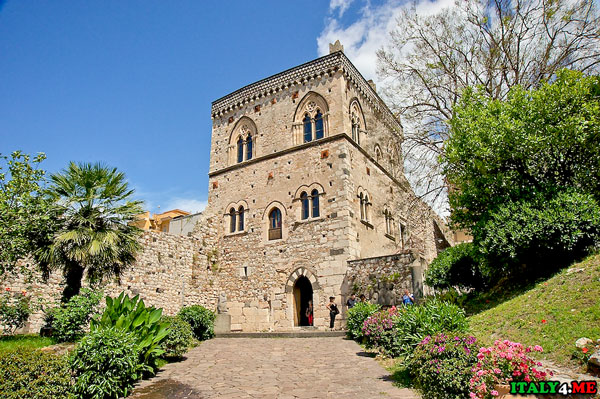 This building was badly damaged during the Second World War. But thanks to the Catholic Church, which took it into its custody, its beauty was restored to its original state.

Taormina, like Florence, has its own Palazzo Vecchio. The Palazzo Ciampoli, the oldest palace in the city, holds this title. A memorable plaque on the wall of the palazzo reports that construction work on the building began in the 15th century. However, the real date of the palace’s creation is lost in the depths of the 13th century. 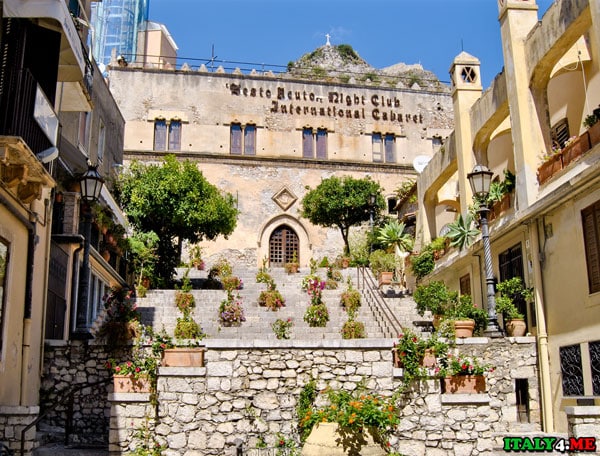 All subsequent works expanded the originally modest castle and changed its appearance in every way. According to some reports, the original owners of the castle were Corvaja, who later ceded the old residence to the Cimpoli family. At the beginning of the twentieth century in the walls of the palace Cimpoli was a hotel, which has not survived to this day. 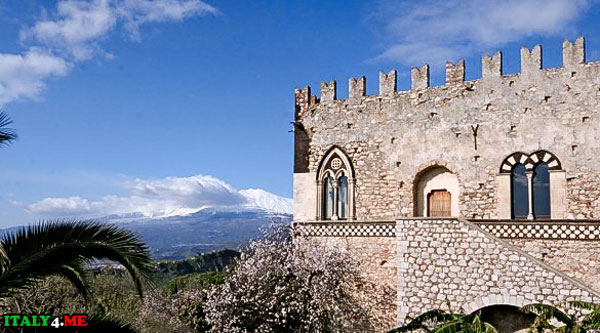 At the end of our review of Taormina castles is the Old Monastery palazzo which dates back to the 14th century. Today, the small palazzo building houses a museum dedicated to archaeological discoveries. In the past, this palace served the needs of a Catholic abbey. In appearance, it resembles a typical fortification tower, enlivened by twin Gothic windows. The contrasting ornamentation of lava and Syracuse stone tiles, fashionable in the Middle Ages, elegantly wraps around the palazzo.

Witness to the culture of Ancient Greece and Rome are carefully preserved by the city’s municipality and are available for all to see. The remains of the Greek Theatre (Teatro Greco), evokes contradictory feelings. The preserved fragments allow tourists to appreciate for themselves the scale of the ancient builders (III century BC). The diameter of the open theater was 109 meters, the tribunes could accommodate up to 10,000 spectators. 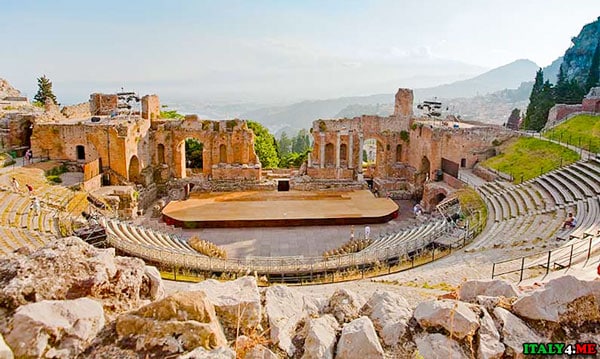 The construction of such a vast theater on a mountainside required considerable efforts, such as arranging the site with the help of 100 000 cubic meters of limestone rock! However, the past millennia have not spared such a grandiose construction. The wonderful view of the sea and the surrounding nature can delight the eye with unfailing force. 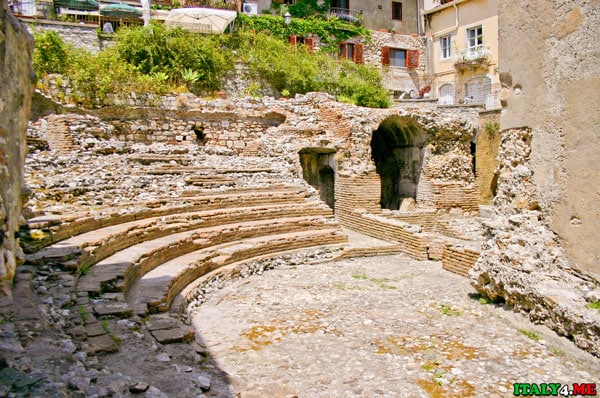 In contrast to the Greek giants, the Roman Odeon (open theater) has very modest dimensions. It had a seating capacity of 200 people and was probably used for city council meetings. In the annals of Taormina the Odeon is attributed to the Roman consul and politician Octavian Augustus (first century BCE). 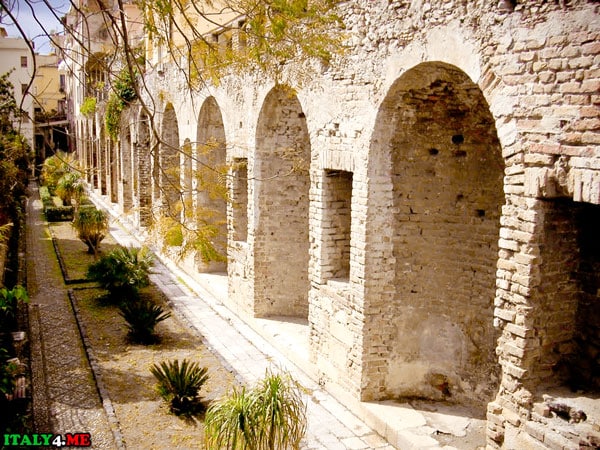 Another testimony to the greatness of the Roman Empire in the city are the ruins of Naumahia. In ancient Rome this term was used for the water battles of gladiators. A peculiar pool almost 122 meters in diameter and 5 meters deep served for the spectacular battles in water.

Finally, we would like to point out Taormina’s main attraction, which is available to everyone for free. From the heights of the city tourists can freely see the jagged curves of the mountains, the endless smoothness of the silky sea. If the weather is good there is an unparalleled view of the active volcano Etna. Also do not forget the stunning air, filled with the purity of mountain air, mixed with salty sea winds. When the trees and bushes are in bloom, incredible scents waft through Taormina’s streets. 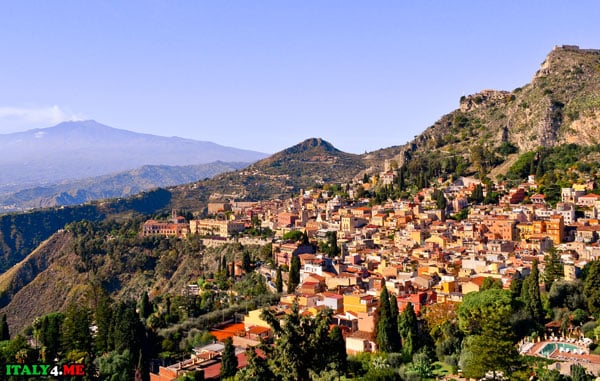 Stop by the City Garden, or by one of the many exhibitions and events held in Taormina. You will be overwhelmed by a mass of unexpected and positive experiences. Why else would you travel if not to change your drab daily routine into a full-blooded holiday! Have a great vacation!