Lausanne (Switzerland) – the most detailed information about the city with photos. The main sights of Lausanne with descriptions, guides and maps.

The city of Lausanne (Switzerland)

Lausanne is a city in southwestern Switzerland and the capital of the French-speaking canton of Vaud. It is the second largest city on Lake Geneva (after Geneva), combining a dynamic commercial center and resort, sports and culture. Lausanne is an old university city with elegant, winding streets and is the headquarters of the International Olympic Committee (IOC).

What to do (Lausanne): 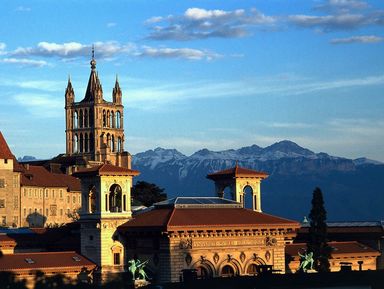 Lausanne, capital of the Olympics and of the aristocracy

Lausanne is located at the northernmost point of the Lake Geneva, overlooking the Savoy Alps on the border of the famous wine regions of Lavaux and La Côte. The altitude is from 372 to 929 meters above sea level. The climate of Lausanne is temperate continental with some maritime influence. Summers are warm and rather rainy with an average temperature of about 20°C, winters are cool with an average temperature of about 0°C. 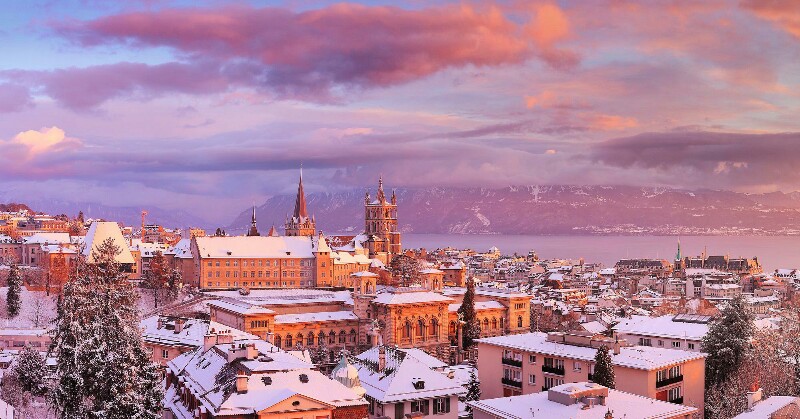 In ancient times there was a settlement of Helvetians on the place of Lausanne. In the 1st century BC, the land was conquered by Julius Caesar. In 15 BC, the Romans founded a military camp, which was named Luzonne (Lausodunum). Luzonne was destroyed in the 3rd century AD during the Germanic invasion. 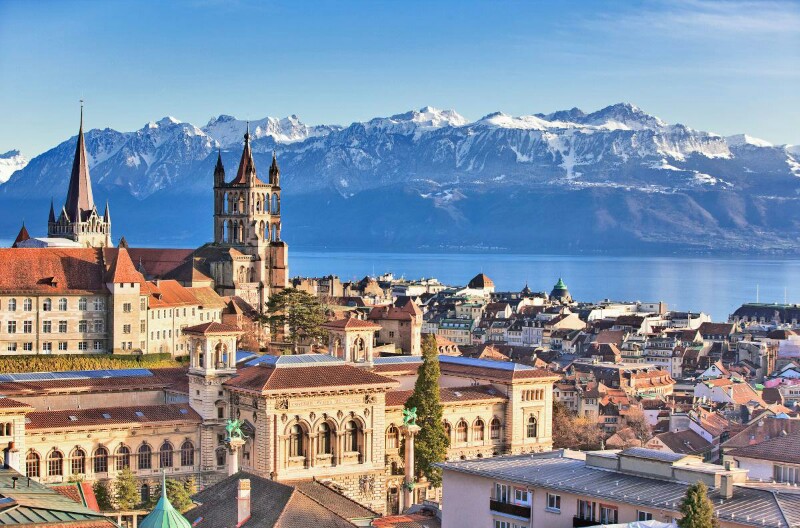 The panorama of Lausanne 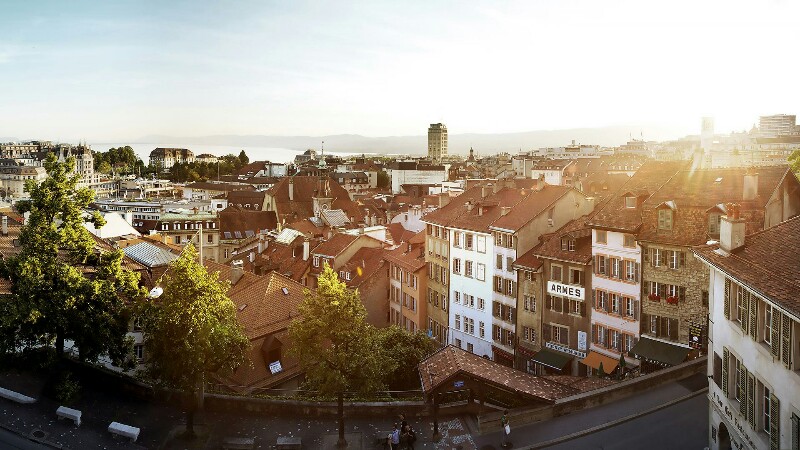 Together with the future canton of Vaud, Lausanne became part of Savoy in 1218. The bishops still ruled the city. In the 13th century, there were several armed conflicts between the city’s citizens and the church. In 1525 Lausanne joined the Swiss Union. The burgomaster of Lausanne took over in 1529. 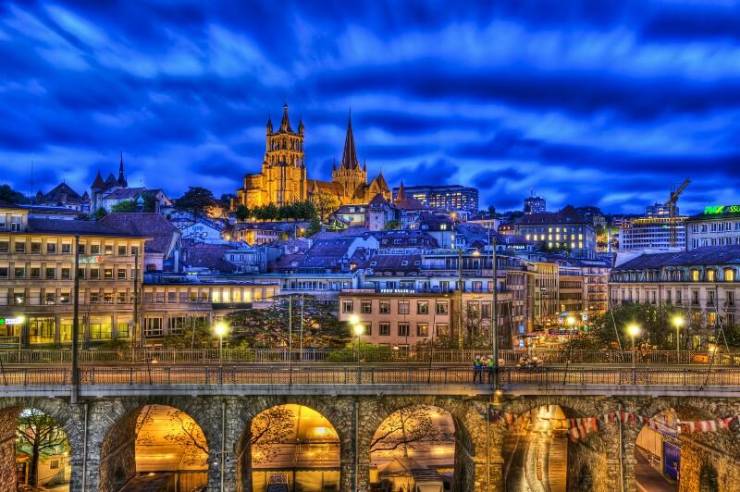 In 1536 the Dukes of Bern began to rule Lausanne. It lost its significance and became an ordinary provincial city. The Republic of Lausanne was proclaimed here in 1798. The canton of Vaud was created in 1803, and Lausanne became its capital.

Lausanne is one of the main hubs of the Swiss federal rail system. The city is regularly connected to Bern, Geneva, Zurich, Basel, as well as Paris, Milan and Venice. The nearest airport is in Geneva. 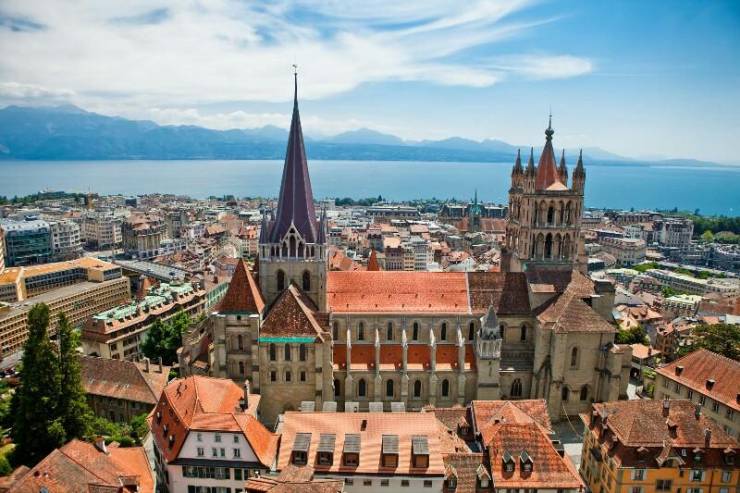 Notre Dame Cathedral is the cathedral of Lausanne, which is considered one of the most beautiful Gothic monuments in Europe. The church was built between the 12th and 13th centuries and is one of the largest religious buildings in Switzerland. The cathedral has been Protestant since 1529. Notre Dame rises on a hill above Lausanne. The central tower is 72 meters high. The cathedral is famous for its beautiful interior and ancient 13th-century stained-glass windows. In the crypt you can see fragments of an early 8th century basilica and ancient tombs. 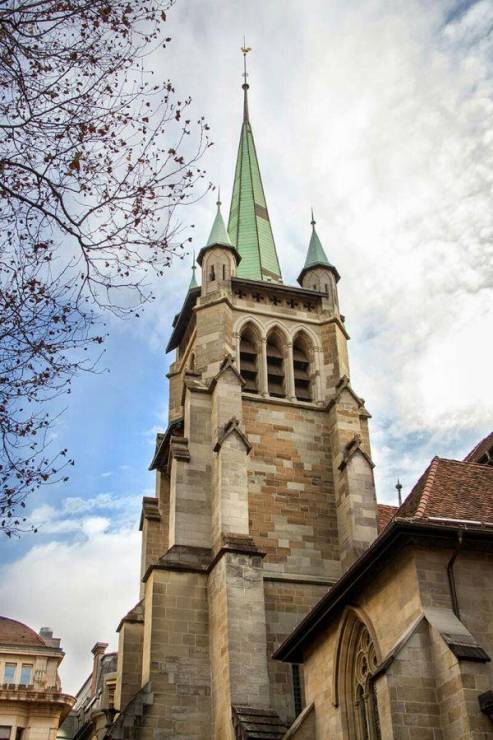 The Church of St. François is an ancient Gothic church built between the 13th and 14th centuries. It was once part of a large Franciscan monastery, which was abolished during the Reformation. During this period, the interior of the church was stripped of many decorations. A Christmas market is held annually on the square. 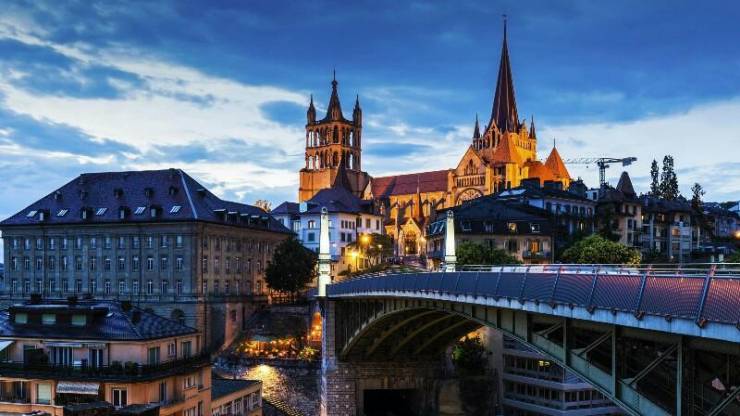 La Cité is the area around the hill of Cité around which the medieval city grew. At the top of the hill rises Notre Dame Cathedral. La Cité has atmospheric narrow streets and a medieval ensemble of old houses. 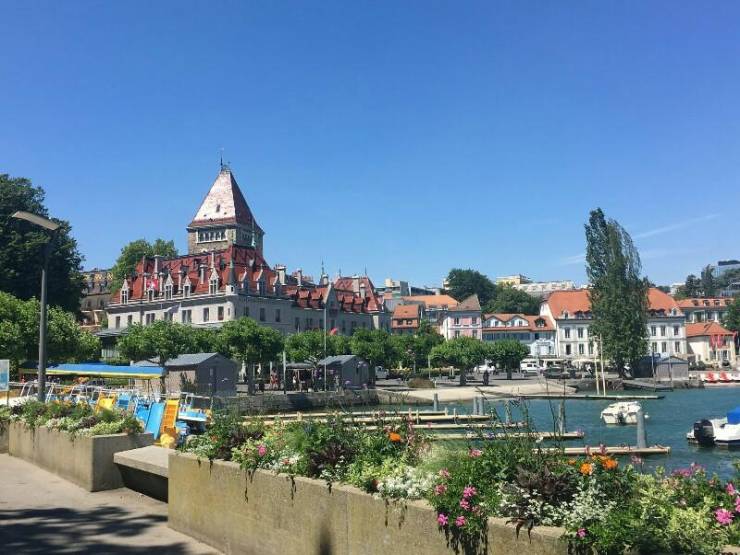 Ouchy is the area between the old and new ports to the Olympic Museum, which is known for its promenade, parks and flowerbeds. In the center of the neighborhood is the 12th century castle, within whose walls the peace treaty between Turkey and Greece was signed in 1923. 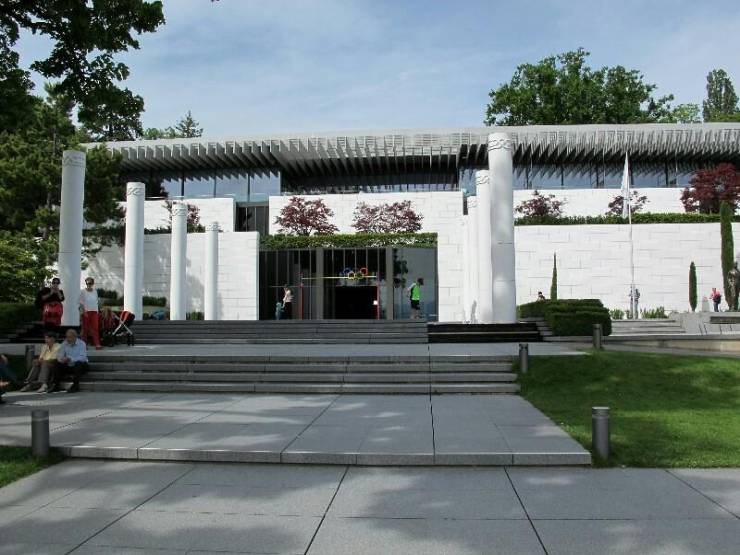 Olympic Museum is a sport museum dedicated to the origin and history of the Olympic Games. It displays Olympic awards, sports equipment and equipment of the great athletes. 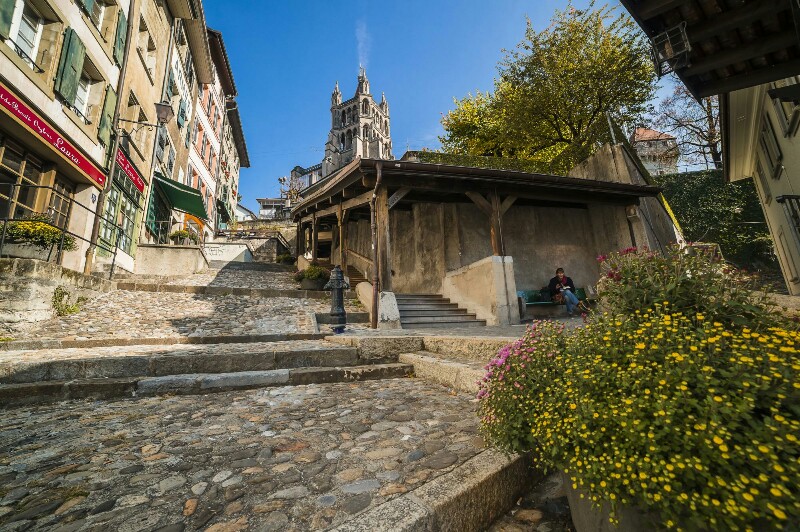 The Escaliers du Marche are picturesque terraces from the 13th century that lead from the market on the Place du Palud to Notre Dame Cathedral. 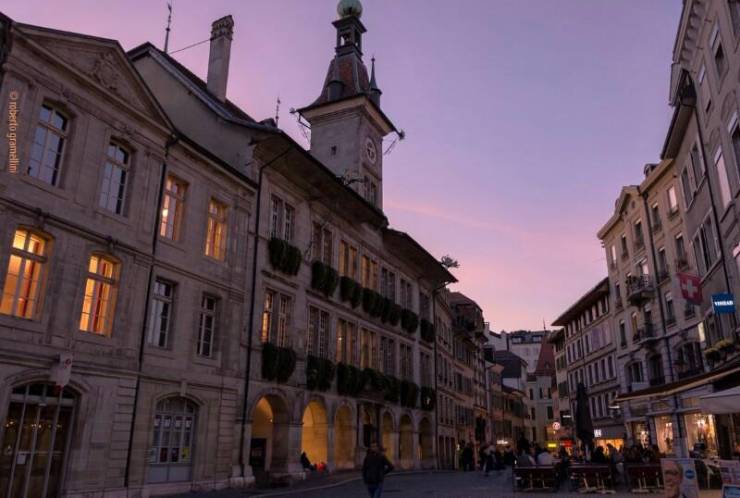 Place de la Palud is the most beautiful historic square in Lausanne. It has the oldest fountain in the city and the 17th century town hall. On Wednesday and Saturday there is a farmer’s market. 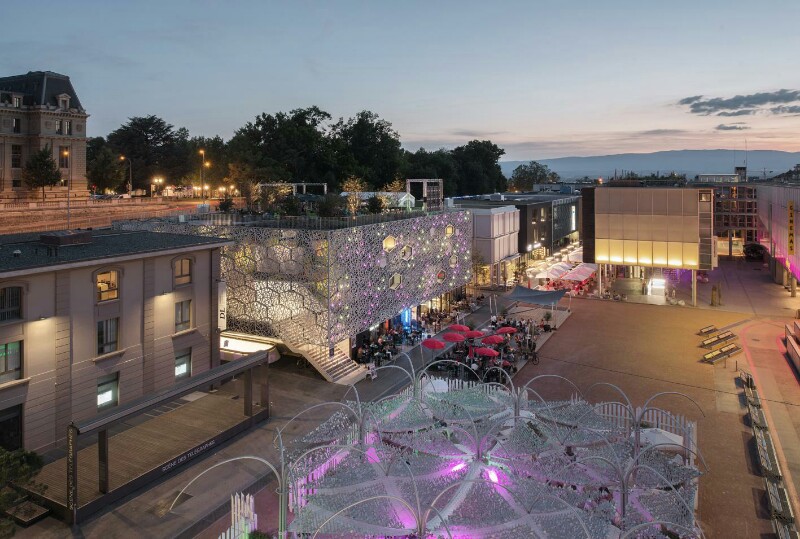 The Flon is a modern, dynamic district built on the site of former warehouses, with many restaurants, bars, clubs and stores, as well as cinemas, galleries and spas. This is one of the most popular places in Lausanne for recreation and meetings with friends. 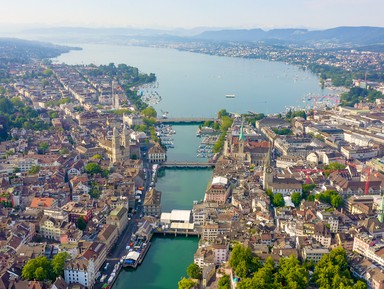 A first encounter with Geneva!

The largest alpine lake and other points of interest of the city on a meticulous sightseeing tour.

In June, the International Olympic Committee (IOC) moved into a new building in Lausanne. The unusually designed building is one of the most environmentally friendly in the world, and the IOC has saved a lot of money on it.

The headquarters, named Olympic House, is located just a few meters from the Chateau de Vidy, an architectural monument of the XVI century, where the IOC headquarters was located (by the way, it is possible to get there directly from the new building by a special transition). 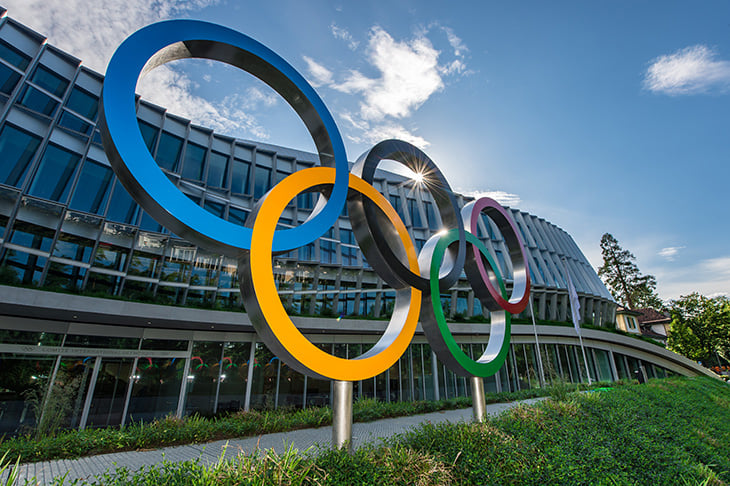 The designers have organically blended the Olympic House into the landscape of the public park on the shore of Lake Geneva. They took full advantage of the location (see video, which is only available on YouTube).

In a five-story building, almost completely glazed, the IOC will gather more than 500 employees – previously they worked in four offices throughout Lausanne. The head of the committee, Thomas Bach, noted that it is a symbol of the Olympic movement – uniting and breaking down borders. Another desire of the IOC – to be a transparent structure – is also reflected in the appearance of the building.

The IOC began work on the project in 2012. Two years later, the design by the Danish firm 3XN was approved; Swiss architects from IttenBrechbühl monitored the construction. According to the designers, the new headquarters reflects five key elements associated with the Olympic movement: symbolism, integration, flexibility, cooperation and sustainability. The designers say the building is built in the shape of a dove, the bird of peace, while the IOC sees the silhouette of a running athlete in an intricate x-shape.

Wow, how crazy were the Olympics: with pigeon shooting, tug-of-war and pistol duels

The exterior is quite futuristic due to the abundance of glass, but at the same time on the roof of the first floor of the multilevel building continues the park – the landscape designers integrated it into the building itself. 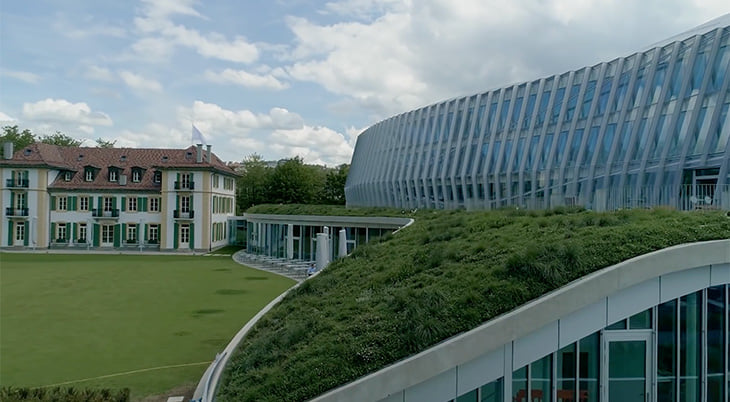 Eco-friendliness is perhaps the main feature of the new headquarters. It meets all the principles of environmental sustainability (the ecology’s ability to withstand human impact). The building has three highest environmental certifications. One of them, LEED Platinum, recognizes the Olympic House as the most environmentally friendly building in the world in recent years. The LEED (Leadership in Energy and Environmental Design) program has registered more than 98,000 buildings in 175 countries.

Solar panels on the roof of the building and heat pumps pumping water from Lake Geneva provide renewable resources for the Olympic House. The building is expected to use 35 percent less electricity and 60 percent less municipal water (including for space heating) than a standard new building. An abundance of windows will reduce energy consumption. 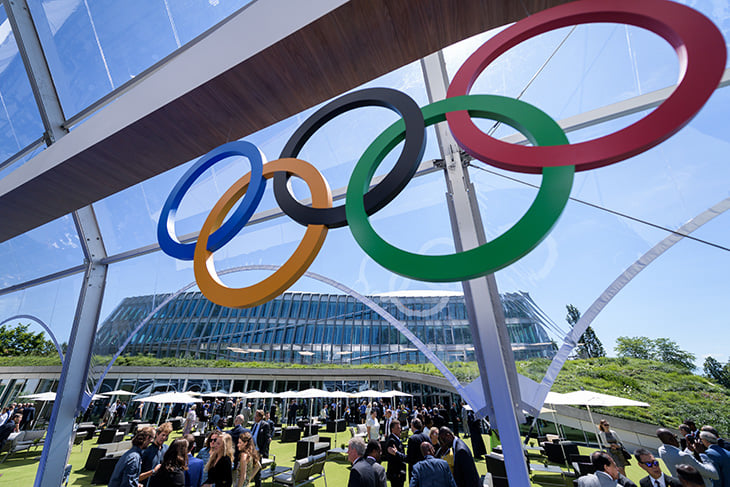 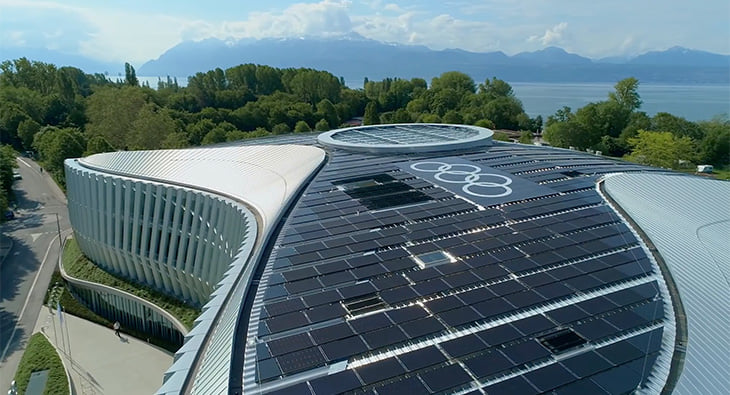 The centerpiece of the interior design is a spiral staircase making reference to the five Olympic rings: it connects the five floors of the building and symbolizes the unification inherent in the Olympic idea. Inside there is a conference center, meeting rooms, a restaurant, an exhibition hall, open-space offices, a gym, a terrace and underground parking. 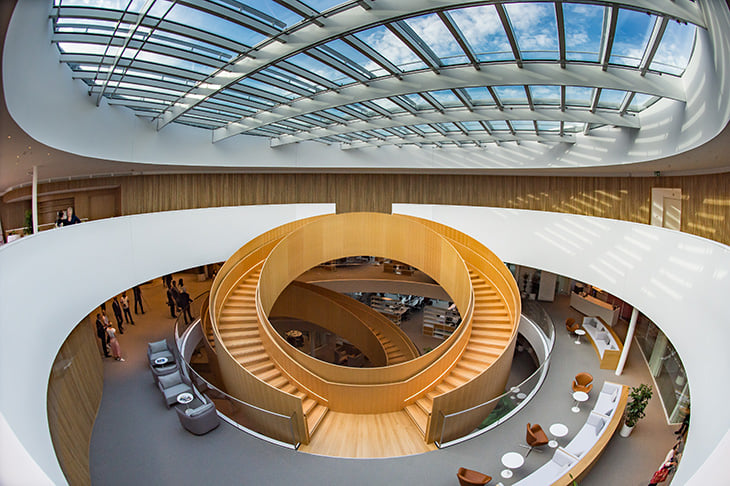 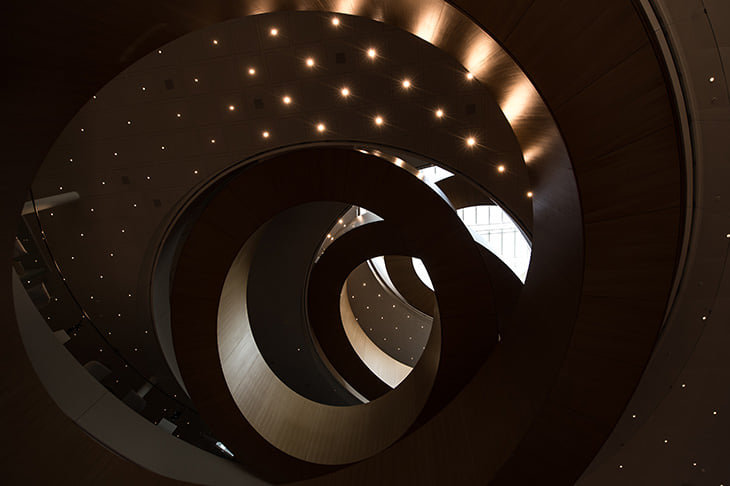 The initial IOC budget was set at $200 million, but in the end the building ended up costing $146 million. The savings were possible mainly thanks to an appropriate distribution of the old resources and sponsor help.

95% of former IOC offices (with the exception of Chateau de Vidy) were used for new purposes: old concrete was put in the foundations of the new building, electric appliances were given to local schools, sanitary equipment – to non-profit charitable organizations, carpets – to concert organizers.

The international chemical company Dow helped optimize the architecture of the building as well as reduce the carbon footprint – the program has already offset emissions from the building’s construction and operation through 2020. Another IOC partner, Toyota, is supplying the organization with zero-emission hydrogen cars, and Panasonic provided equipment for all the conference rooms in the new building. 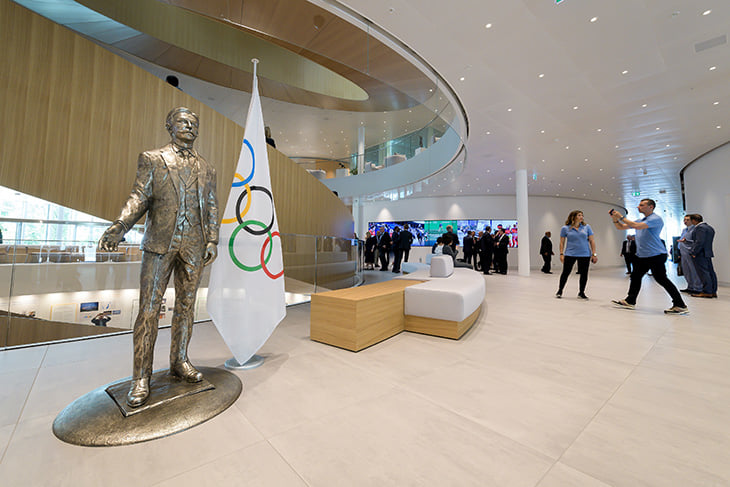 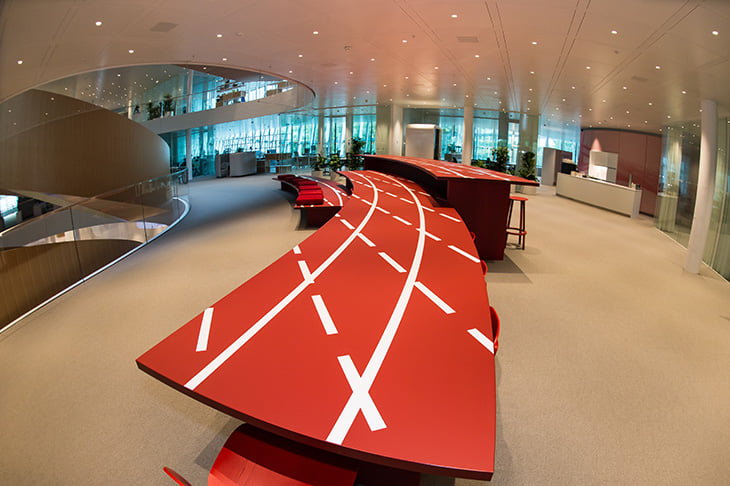 The IOC has built the building of the future guided by the principles of unification and transparency. Maybe now nothing will stop the Olympics from doing the same.