The Fathers of Suriname

The phrase about the fathers from Suriname, which has enriched soccer folklore, was born in a report from the Euro 1988 match by Vladimir Pereturin, now unfamiliar to the new generation of fans. Fascinated by the play of Ruud Gullit, Frank Rijkaard and other Dutch Surinamese, he suggested live on air that fathers from the faraway West Indies should be imported to produce qualified soccer personnel in the USSR.

The Leningrad newspaper Smena, where I later worked, responded with a ditty: Let the Surinam fathers go straight to Dynamo. Pereturin will make children there without any fuss.

Vladimir Ivanovich is said to have had it coming to him for that phrase. Perestroika might be a perestroika, but at that time party control over soccer still existed. Many even argue that it was due to that control that the USSR national team won the silver medal in that championship, where the winners were the children of their fathers from Suriname and Marco van Basten who joined them.

In case anyone doesn’t know, Suriname is a small country on the soccer map in the CONCACAF zone. It gained independence in 1977, and before that it was called Dutch Guiana. Long before that, many Surinamese were drawn to the metropolis in search of a better life. For many black boys in Amsterdam, The Hague or Rotterdam, soccer was the only way out.

It’s no coincidence that the Surinamese community has always played a prominent role in Dutch teams in recent years. First Gullit and Rijkaard, then Edgar Davids, Jimmy Hasselbaink, Patrick Kluivert and Clarence Seedorf.

Often the Orange have split into “white” and “black” right in the course of the World Cup and European Championship. Dick Advocaat at the ’94 World Cup, and Guus Hiddink four years later. Bert van Marwijk had no such problems at UEFA EURO 2012. There were just very few children of Surinamese fathers in his team: Yetro Willems and Luciano Narsing. Even the children of Moroccan fathers were the same: Khalid Boulahrouz and Ibrahim Afellay.

READ
The sights of Ireland. A country with Celtic roots.

In today’s diverse Europe almost all national teams actively use the children of immigrants, or simply naturalize the players they need, ignoring at times even their lack of knowledge of the language of their historic homeland. The Italians have their own “children”, but from Africa – Angelo Ogbonna and Mario Balotelli plus the native Brazilian Thiago Motta. The Germans have a solid international, from Poles to a Tunisian. Even the Ukraine national team, on the eve of the Euros, found it necessary to bring in Serbian Marko Devic.

In the early 90s, the Russian national team made wide use of the soccer potential of the entire former Soviet Union. Not Suriname, though. “Ukrainians” Viktor Onopko, Sergey Juran, Yuri Nikiforov, Ilya Tsymbalar, “Belorussian” Sergey Gorlukovich, “Estonian” Valery Karpin, “Georgians” Omari Tetradze and Ahrik Tsveiba, “Uzbeks” Andrey Pyatnitsky and Valery Kechinov as well as Andrey Kanchelskis, for whom not only Ukraine but also Lithuania was a contender. All of them were defending the colors of Russia, and the question of prevailing patriotic feelings over professionalism in the formation of the national team was never raised.

Today, the situation is different. It is clear that after Igor Akinfeev’s injury, even marrying Victoria Bona would not have helped Welliton to play for the Russian national team. After all, the native Russian Alexandr Aliyev was also gifted to the Ukrainian team, and at a young age. All the hints to pay attention to the numerous Soviet Germans, who grew into the masters of high class in their historic homeland, were stubbornly ignored. Already overlooked was Andrei Beck, who played for the Bundestim.

Playing in Italy, Kazakhstan native Alexander Merkel has repeatedly expressed a desire to play for Russia, but Dutch coaches and Russian functionaries preferred to plug their ears. It’s not about the passport, of course. As John Robert Holden’s experience shows there are no problems with it. Hannover`s defender Konstantin Rausch was born in the Tomsk region and has the right to be a citizen. They didn`t even try Vadim Demidov who plays in the Spanish national team with a Norwegian passport.

The heads of Russian clubs have long neglected our Surinam, stretched from Tallinn to Dushanbe. Although it is quite possible to find young talents in the former Soviet Union and bring them up to the national team level.

But they prefer to issue Russian passports to players who have already played for other national teams. As well as to buy these very foreign players for absolutely inadequate money by the standards of the soccer market. If this trend persists in the coming years, then after the 2018 FIFA World Cup we will definitely have to import dads from Suriname.

Suriname. The colony that gave away a lot of talent

Suriname is an inconspicuous state from South America. After the great geographical discoveries it became a colony of the Netherlands, and only after three centuries of Dutch rule, it ceased to be a colony. At first glance, nothing special and should not be. But there are many soccer players associated with this state, known around the world. 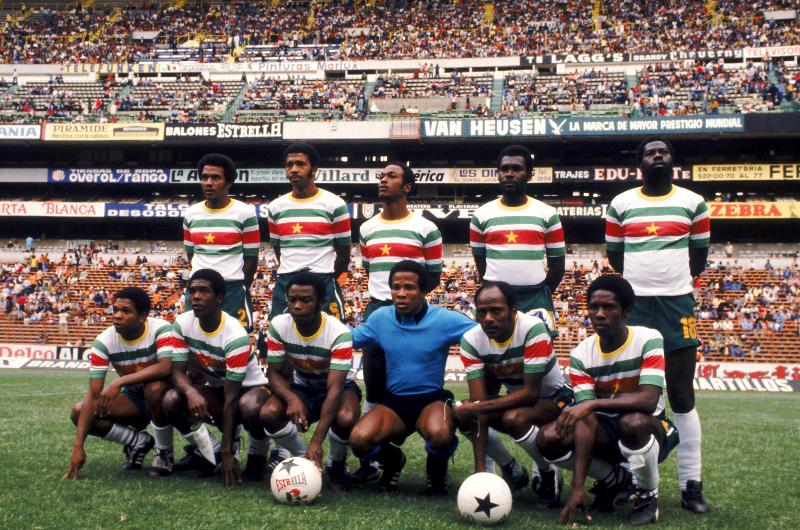 Suriname’s national team has achieved nothing in its history. Its highest FIFA ranking was in 2008, when the team was at 84th position (Suriname currently occupies 136th position). Of course, the team didn’t participate in big tournaments, but soon that will change.

The Suriname national team was able to qualify for the CONCACAF Gold Cup 2021. In qualification, it opposed the national teams of Dominica, Nicaragua and Saint Vincent and the Grenadines, and Suriname easily enough passed to the tournament. In the Gold Cup itself, Suriname will face Jamaica and Costa Rica. Not the most difficult group, but it still won’t be easy to get out of that one. But before the tournament, many players decided to play for the national team for a reason. 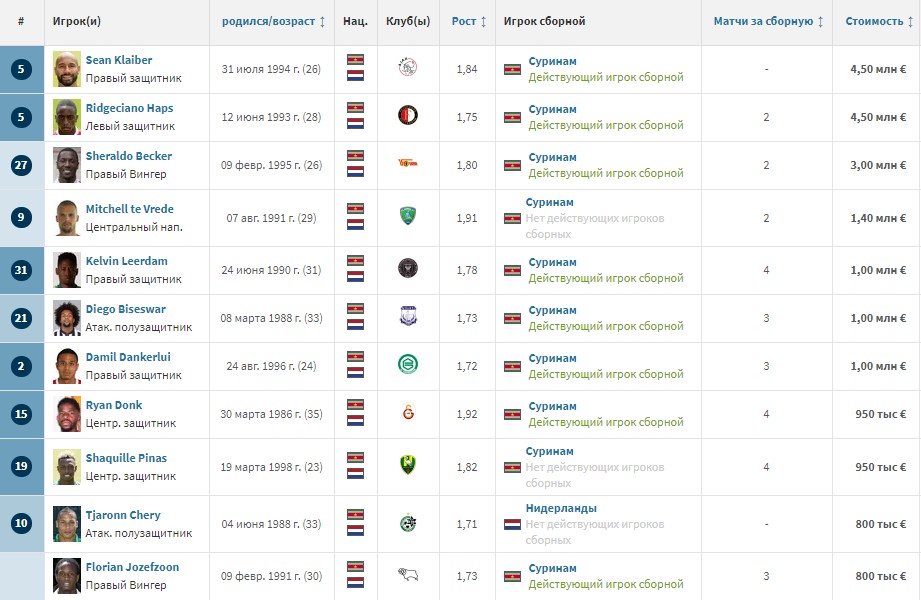 In 2021, the Suriname national team began to call up players who have the opportunity to play for Suriname. Thus, it was recently announced that Ajax’s fullback Sean Klaeber has decided to play for the South American national team. 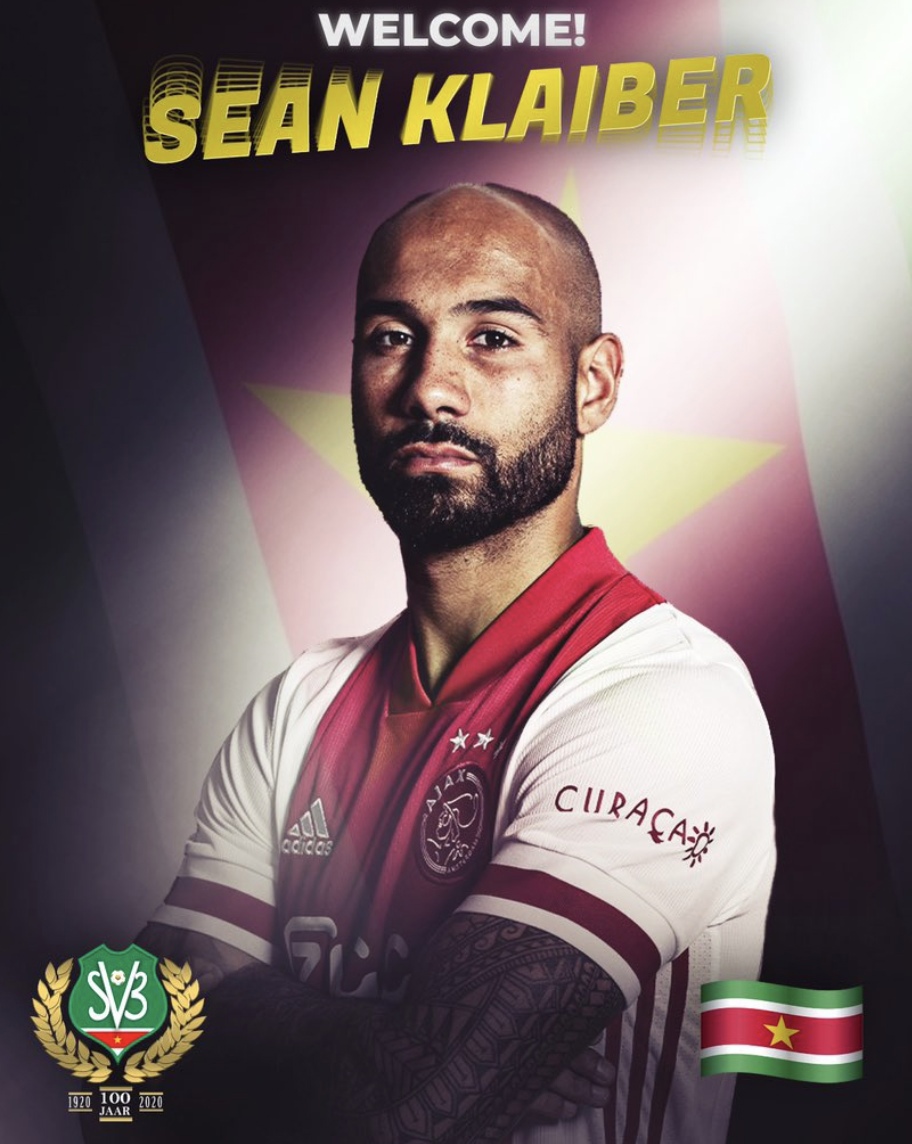 In addition to him, we can mention players such as Ridgesiano Haps () the main defender of Feyenord for a long time, but this season he lost his place in the starting lineup.), Ryan Donk (a defensive player who is spending his career at mid-table clubs), Diego Biseswar (Offensive line player who played more than 150 games for Greek PAOK). The selection is good enough, but I don’t believe Suriname can make it out of the group just yet.

But at the European Championship, the Dutch national team also had players who, in theory, could become players for Suriname. The most famous of them are Liverpool midfielder Georginho Wijnaldum and Spartak striker Quincy Promes. It was the same situation at different times, and in the Dutch national team it was always possible to find players who were related to Suriname.

It was even possible to assemble a themed squad, consisting of players who could have played for the Surinamese team, but chose to play for the Netherlands. This national team will be very strong because we will have some of the best players in this position with Frank Rijkard, Clarence Seedorf and Edgar Davids in the center of the field alone. Also, the national team will have the best central defender at the moment – Virgil van Dijk, and in attack – Patrick Kluivert. That’s what we got. 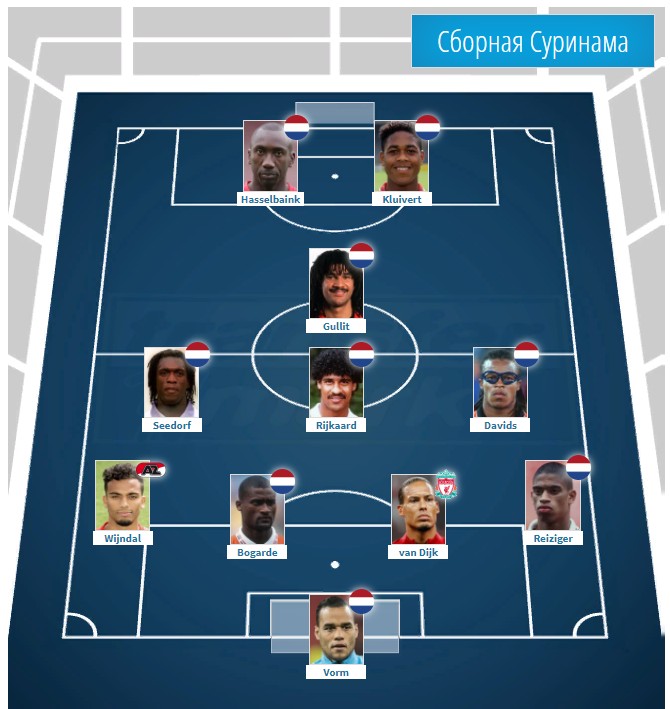 But these are the players we know from their performances in the Dutch national team. What other options are available to strengthen the current Suriname squad? Of those who have not yet made their debut for the main Dutch national team, it is worth noting Jirano Kerk (25-year-old right winger from Utrecht), Stefano Denswil (28 year old central defender Brugge) and Dejovaisio Zefijk (23-year-old edge defender for Hertha). Of course it is possible that in the future they will be called up to the European national team, but it seems unlikely. There are still a few young players, but it is too early to assess their future.

READ
What to see in Brussels, Belgium?

In general, a similar situation with players, as in Suriname, are present in other countries of South and North America, which at one time were colonies. At this year’s Gold Cup also plays the national team of Curacao (also a former colony of the Netherlands). The current Dutch squad also has players who could play for the same Curacao team. They are young fullback Jurrien Timber and experienced fullback Partick Van Anholt.

The influence of our world’s colonial past still appears in various aspects of our lives. Soccer is no exception. Thus, the players of the best national teams of our time are brought up in former colonies such as Suriname and Curacao, but they all choose to play for European teams, leaving their homelands with equally weak squads.