The island of Sumatra is perhaps the most dangerous and the most beautiful island in Indonesia. Traveling through Sumatra is a worthy challenge for any self-respecting adventurer. On one side of the scale – absolutely gorgeous nature, incredible cultural experience, low prices and lack of tourists, on the other – the constant natural disasters: volcanic eruptions, earthquakes, landslides, floods and tsunamis.

Among the main riches – picturesque Lake Toba, national parks, which are home to rare species of orangutans, magnificent crater lakes, distinctive villages and beautiful coral reefs of the island of Veh.

Sumatra is a large island, the 6th largest in the world. Geographically, Sumatra stretches from the northern Andaman and Nicobar Islands to the south to the island of Java, the northeastern coast is adjacent to Malaysia and washed by the Strait of Malacca, the west coast is washed by the Indian Ocean.

North Sumatra is the most popular region of the island among travelers, and it is here that the island’s main attractions, Lake Toba and Bukit Lavang, are located.

Plan to spend at least a week in Sumatra.

North Sumatra is the most popular and easily accessible region of the island. Christians and Muslims peacefully coexist here. The region’s main airport is located in Medan, the largest city in Sumatra and the capital of the Northern Region, which is the starting point for almost all travel on the island.

Medan, this large, densely populated city on the northeast coast of the island, is the starting point for most travel in Sumatra. Travelers usually try not to linger in Medang, but for those who want to experience urban, non-touristy Sumatra, Medang is a great place.

A popular way to explore the city’s sights is to rent a besak (motorcycle with a passenger stall). It should be noted that Medang is famous for its special local cuisine, dishes which can be tried in the restaurants of the city.

Where to stay: Hotels and Guesthouses

How to get there: by air from Kuala Lumpur and Pedang (Malaysia), Bangkok and Hai Yai (Thailand), Singapore and Hong Kong, from Java (Jakarta, Bandung, Surabaya), and from Banda Aseh and Weh Islands in Sumatra.

At a market in Medan. Photo credit: ReveWorks, Flickr

Lake Toba is the largest crater lake in the world and a favorite destination of backpackers in Sumatra. Samosir Island, located in the center of Lake Toba, is actually the destination of visitors to Toba. Here there are a lot of modern gestation houses neighboring the traditional homes of the local Batak people.

In addition to the incredible scenery and local attractions, the region of Toba Island is also famous for a pleasant, relaxed and very lazy atmosphere, seasoned with a slight inner turmoil of being in the middle of an extinct volcano.

Most of the local hostels are located right at the water’s edge. The format of the lake vacation is long walks, motorcycle rides, fishing with the locals, or just a hammock.

Where to stay: Lake Toba hostels

How to get there: by bus from Medan (4-6 hours) to Parapat, located on the banks of the Toba, then by boat to Samosir Island; by tourist minivan from Berastagi and Bukit Lavang.

Bukit Lawang is a small village located next to the Gunung Leuser National Park. From the 1970s until recently, Bukit Lawang was home to a rehabilitation center for orangutans, making the small village one of Sumatra’s most popular tourist destinations. At the time of writing, the Orangutan Rehabilitation Center in Bukit Lawang is closed (check current information when planning your trip), but the village actively offers 1-2 day hiking tours in the national park.

Trekking through the jungle in search of orangutans is the main goal of travelers to Bukit Lavang. Treks are offered in a variety of formats, from easy jungle walks to more challenging programs.

Where to stay: Hostels and Eco Lodges

Getting there: by bus from Medan, tourist minivans from Lake Toba and Berastagi

Berastagi is a small, very pretty town located in the mountains near Lake Toba. The town itself, except for the fruit and vegetable market, which sells local delicacies, has no special attractions. But, there is a pleasant colorful atmosphere, interesting cultural traditions of the small Karo people who live in the region, and incredibly picturesque surroundings.

Trekking to Sinabung and Sibayak volcanoes and Sipiso-Piso and Sikulikap waterfalls, as well as visiting local traditional villages, are worth a stop in Berastagi.

Where to stay: Hotels and hostels

Getting there: By bus from Medan, tourist minivans from Lake Toba and Bukit Lavang

Located about 100 kilometers off the southern coast of North Sumatra, Nias is a small island, well off the beaten track. Lagundri Bay on Nias is one of the “secret spots” of adventurous surfers. You’ll find a couple of surfcamps and homestays here and surfing, walking around the island, swimming with the big turtles and delicious food.

How to get there: by plane (Nias, GNS) from Medan and Padang.

Pulau Weh – This tiny island in the farthest north of Sumatra, home to “kilometer zero,” is one of the best dive destinations in the world. White sand, emerald waters and magnificent coral reefs attract more and more travelers looking for an alternative to the popular islands of Thailand and Malaysia. The format of accommodation on the island – from ascetic bamboo bungalows to nice hotels.

Where to stay: Hotels and bungalows

Getting there: By plane to Sabang from Medang; by ferry (1.5-2 hours) or high-speed ferry (about 45 minutes) from Banda Aceh.

Bordering North Sumatra, West Sumatra is definitely worth a trip when you have time.

Once a large Danish port, Padang is now the largest city and capital of West Sumatra. Like Medan, Padang most often serves as a transit point of travel, but it is difficult to avoid at least one night in Padang. The best way to spend a good time is through culinary adventures, the local food is famous for its spiciness and the use of unusual ingredients. In Chinatown, in the heart of the old town, you’ll find a variety of good gestation houses and plenty of delicious and very spicy food.

Where to stay: Hotels and Guesthouses

Getting there: You can get to Padang (PDG) from Kuala Lumpur, Java (Jakarta and Bandung), Medang and Nias Island by plane.

Bukittingi is a rather large town, scenically sprawling in the hills, that will please nature lovers and sightseers alike. Even without leaving the city, you can see the traditional houses of the Minangkabau people, admire the incredible views of Ngarai Sianok canyon from the park grounds and spend time in the local cafes and souvenir shops.

Hire a motorcycle and ride to the blooming Harau Valley, Lake Maninjau, and the traditional villages of the Minangkabau.

Where to stay: Hotels and hostels

Lake Maninjau can’t boast the same popularity as the legendary Lake Toba, very rarely do travelers stay here. But, the places here are magical and absolutely relaxing. Checked into one of the gest houses on the lake you can spend a day or two doing nothing surrounded by beautiful nature. Of the available “entertainment” – long walks in the surrounding area and paragliding over the lake.

Where to stay: Guesthouses and hostels

How to get there: by motorcycle or local bus from Bukittinga

READ
Austria: information about the country and the main attractions

The Mentawai Islands are several small islands located 100 km off the west coast of Sumatra. There are some beautiful but dangerous surf spots here, so most visitors to the island are experienced and adventurous surfers. Of accommodation here are surf camps and surf resorts.

A tribe on Siberut Island, one of the largest islands in Mentawai. Photo credit: DocBudie, Flickr. 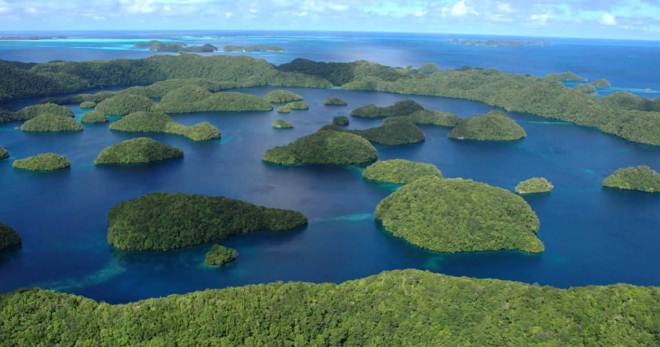 In the west of the Malay Archipelago lies the sixth largest island in the world, Sumatra. As part of Indonesia, it is part of the Greater Sunda Islands. The area of Sumatra is 473 000 sq. km. The population is more than 50 370 000 people. The capital of Sumatra is Medan.

Geographical location and relief of Sumatra

The island of Sumatra, whose photo can be seen below, on the world map is both in the Northern and Southern hemispheres, and the equator divides it into two almost equal parts. The length of the island is approximately 1.8 thousand square kilometers, width – 435 km. From neighboring Malacca, Sumatra is separated by the Strait of Malacca, and from Java – by the Sunda Strait.

The southwestern coast of Sumatra is mountainous, with the Batak and Aceh plateaus. Fault zone divides the mountain range Barisan in two chains, composed of Paleozoic rocks: limestone, quartzite, crystalline schists. The east of the island is a swampy plain.

On the island of Sumatra there are 12 active volcanoes, as well as many extinct. The highest point of Sumatra is an active volcano, Indrapura, or Kerinci, which is more than 3,800 meters above sea level. Other major volcanoes are Merapi 2,891 m and Dempo, 3,159 m high.

The island of Sumatra is characterized by high seismicity. Earthquakes with an amplitude of up to 7-8 points are possible here. In 1883, the erupting volcano Krakatoa, located near Sumatra, submerged an entire neighboring island. And the infamous Sumatra tsunami of 2004, caused by an underwater earthquake, caused enormous damage to its southern and western coasts.

The area where the island of Sumatra is located is dominated by an equatorial climate characterized by high temperatures and humidity. The average temperature is between +25 and 27 degrees Celsius. Winds blow from the northeast during the winter and from the southwest during the summer. The eastern part of the island receives up to 1000 mm of rainfall per year. Western Sumatra can receive up to 4,000 mm of rainfall, and up to 6,000 mm in the mountains. Rainfall is almost non-existent from May to September, with most rain falling in the fall and winter.

Many tourists want to get to this exotic island. Life here is very different from Europe. Of what to see in Sumatra, it is important to name:

The island has a variety of hotels for all tastes and pockets:

For a taste of the national dishes of Indonesian cuisine, you can visit one of the restaurants of Sumatra:

If you come to Sumatra, dreaming of shopping, pay attention to the shopping centers available in each city:

How to get to the island of Sumatra?

When traveling to Sumatra, consider that the easiest way to get to the island is by plane. Medan is the main airport in Sumatra, Kuala Namu, which receives flights from many cities in Indonesia as well as from other countries such as China and Thailand. From the airport you can take a train, a shuttle bus, or a cab to the center of Medan.

To travel by car from Singapore to Sumatra, you can take a ferry. However, such a trip will take you a very long time and may not be safe.