The monastery of Studenica, along with Žića, is considered one of the main sanctuaries of Serbia. We certainly included it in our Balkan trip. The monastery is named after the river of the same name. It was consecrated in the name of the Assumption of the Blessed Virgin Mary. The monastery is located 40 km from the town of Kraljevo. We drove to Studenica through typical Serbian towns. They remind us something of the Russian provinces, not to mention the cars. At the entrance to Studenica there is a traditional brown sign for Serbia.

The monastery of Studenica and its founder, Stefan Nemanja 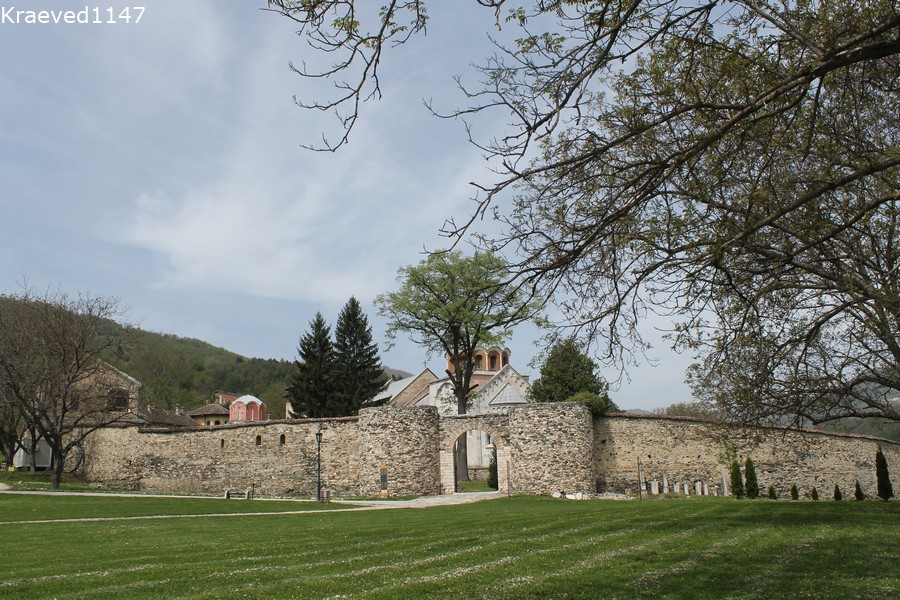 Studenica is the oldest monastery in Serbia that we have visited. It was built by Stefan Nemanja, the founder of the ruling Nemanjic dynasty. Stefan was the great jupan of Raska, the medieval Serbian state. He managed to achieve independence from Byzantium. Nemanja reassembled the Serbian lands, annexing Kosovo, Duklja and territories along the Neretva River. He also built monumental zaduzhbinas, that is, temples and monasteries for the salvation of the soul. Studenica belongs to such dugouts. Stefan founded it in 1190. Six years later he handed over power to his son, the future king Stefan the First Crowned. He himself entered monasticism under the name of Simeon. His relics to this day rest in Studenica. 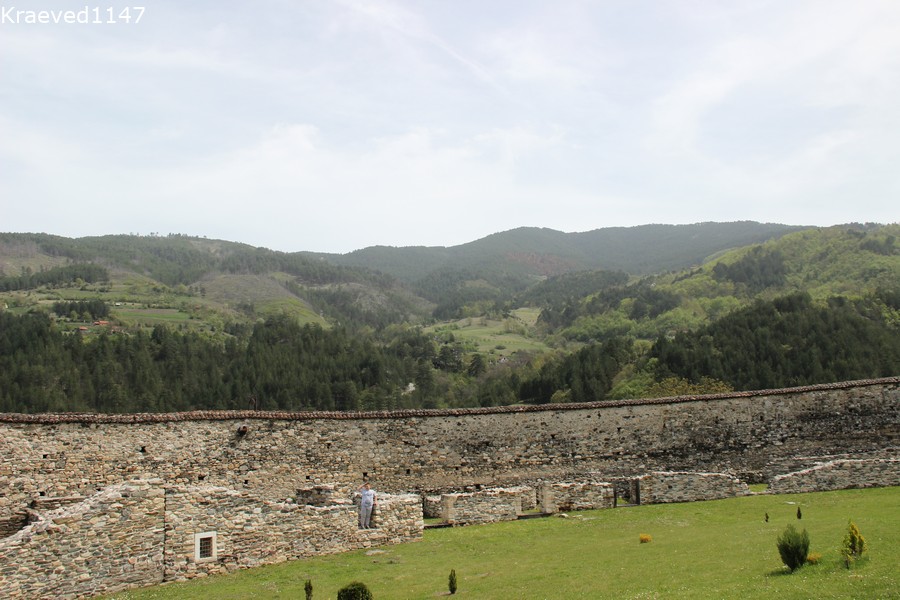 In Studenica, Sava, the third son of Stefan Nemanja, is especially revered. It was he who brought his father’s relics to Studenica. Sava is considered the patron saint of Serbia. The Cathedral of Belgrade is consecrated in his honor. Saint Sava founded the Serbian Orthodox Church and became its first archbishop. It is believed that it was he who compiled the Laws of Saint Sava, that is, a collection of church rules and royal decrees regulating the life of the church.

The temples of the monastery of Studenica

The monastery of Studenica in plan is an elongated oval. This layout is typical of Serbian monasteries. 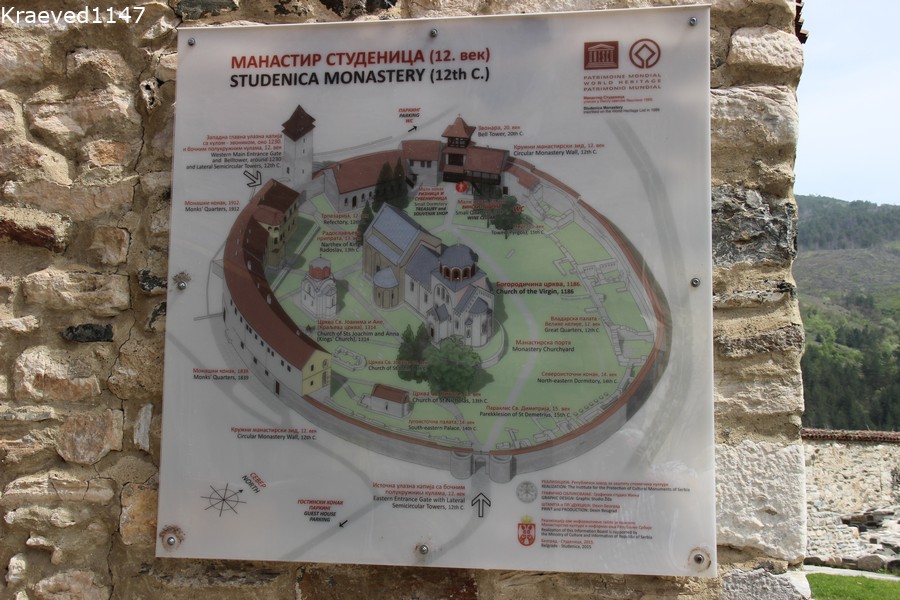 The layout of the monastery 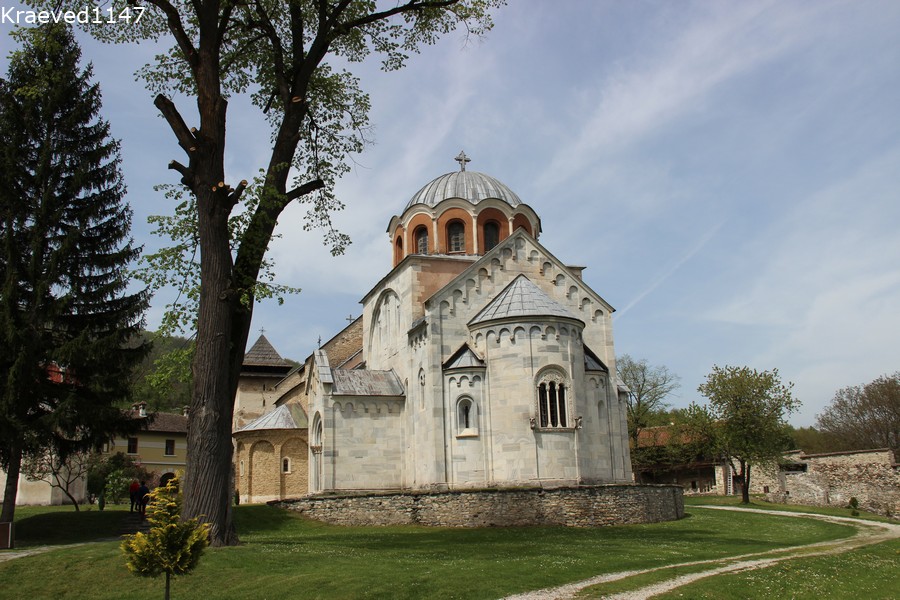 In the center is one of the most beautiful Orthodox churches in Serbia. It is the cathedral of the Assumption of the Blessed Virgin Mary from the end of XII century. Its appearance is a combination of Romanesque and Byzantine styles. Such a combination is called the style of Raška in Serbia.

The portal of the cathedral in Studenica Monastery Altar apsis window

Thirty years after construction was completed, a vast vestibule was added to the cathedral. Its tufa walls contrast with the marble cladding of the Assumption church. Most Serbian monasteries have only one church. In Studenica there are as many as three. The so called Royal Church of 1314 stands to the southwest of the cathedral. It is named after its builder King Milutin. It is consecrated in the name of Joachim and Anne. The small church of St. Nicholas dates from the end of XII century. This church is built of rough stone and resembles an early Christian basilica Nearby can be seen the remains of the ancient church of St. John. It was destroyed by the Turks during one of their many raids.

The monastery of Studenica. Other buildings

It is also worth paying attention to the west gate. They are crowned by the bell tower from 1230. There are also preserved old refectory and sacristy. Both date back to the time of St. Sava. We came across some interesting details. An ancient bas-relief depicts a certain saint. There is a sundial in the monastery courtyard. And a magnolia blooms wildly in front of the cells. The Studenica Monastery is a UNESCO World Heritage Site. Unfortunately, it is not allowed to take pictures of the frescos in the temple. From Studenica we went to Sopocani, another monastery very close to Kosovo.