The most common stereotypes about France and the French 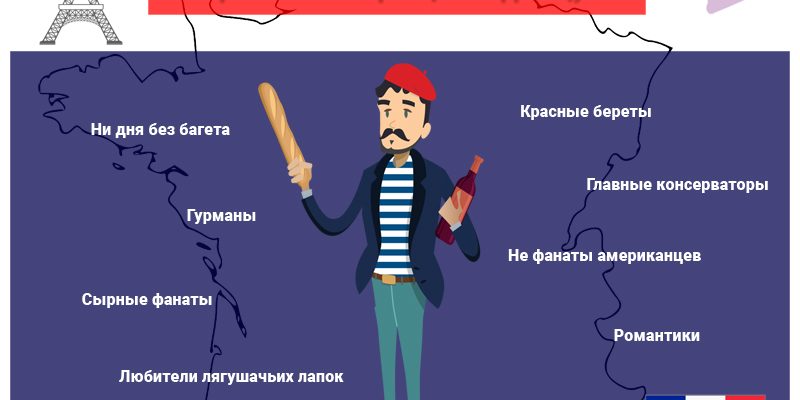 France since time immemorial has been attracting the attention of tourists. Not only lovers dream to go there, but also connoisseurs of art and lovers of fine wine.

In this country every corner, town or castle is full of history. Cave Lascaux, art museums, the Eiffel Tower, the amphitheatre of the Three Gallies, the Palace of Versailles – they all open their doors to millions of tourists every year. 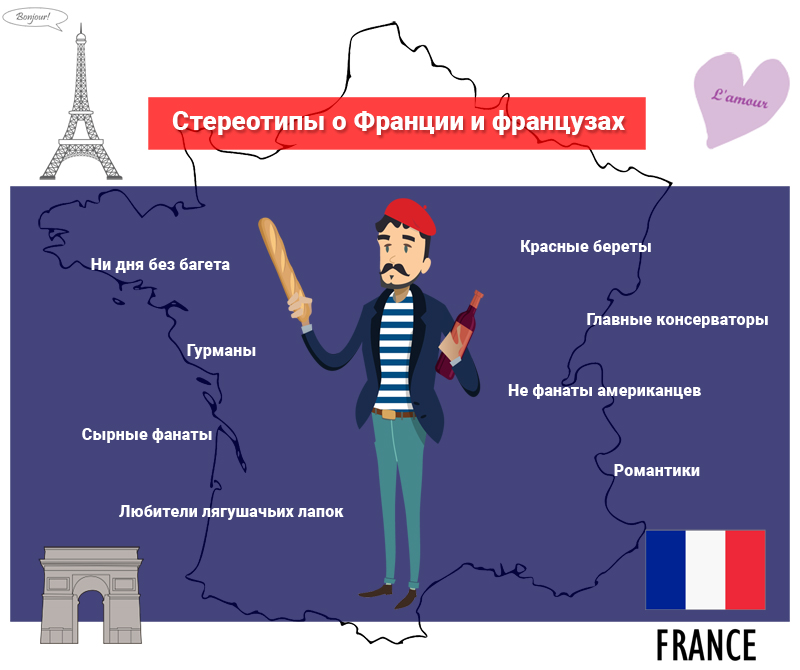 When we arrive in a new country, we observe the locals, their habits and predilections. Based on this, stereotypes are created in our subconscious, when the actions and habits of a few people are attributed to an entire nation, sometimes justifiably and sometimes erroneously. The French are no exception, for many years, some stereotypical images have stuck to them, about which we are now going to tell you.

Not a day without a baguette

The French often come across tourists on the streets with a baguette under his arm. In fact, they love fresh pastries and try not to miss an opportunity to buy a crusty loaf in a bakery. But the undisputed leaders in the amount of bread eaten during the year are the Germans. They consume 85 kg of bread in 12 months against the French 58 kg. 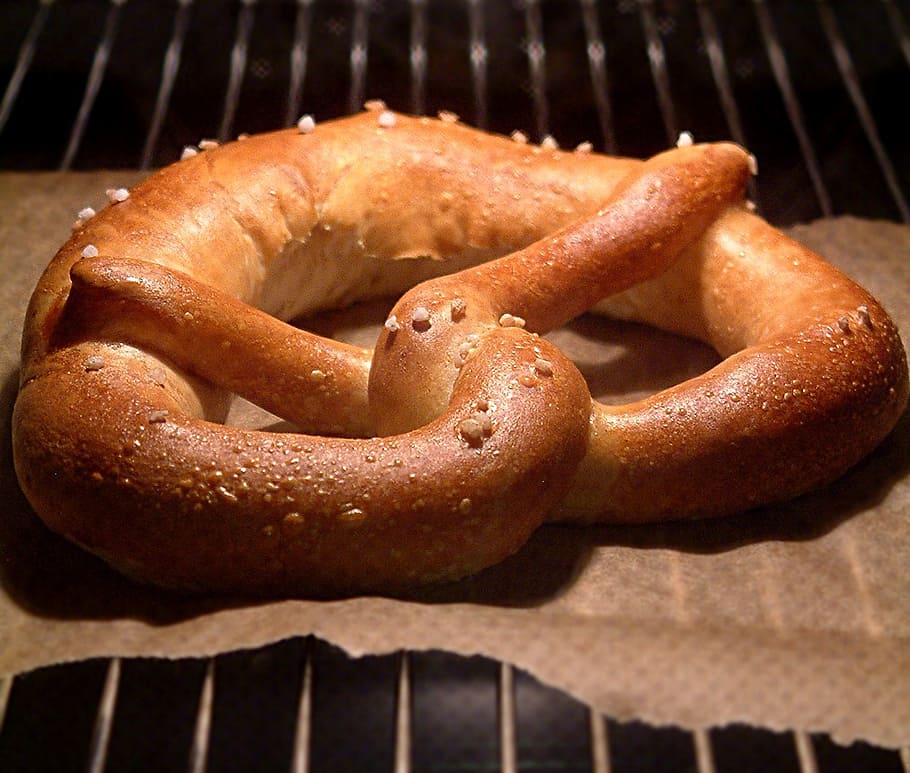 In France great attention is paid not only to the quality of food but also to the process of serving, of which the locals often stage a spectacular performance. Many tourists specifically go on a gastronomic tour of France, because the food there is not only an opportunity to fill the stomach with exquisite delicacies, but also the very art. By the way, a fact that speaks in favor of the stereotype of the French special attitude toward food is the fact that their lunch break can last an hour and a half, so nothing interferes with the taste of the served dishes. 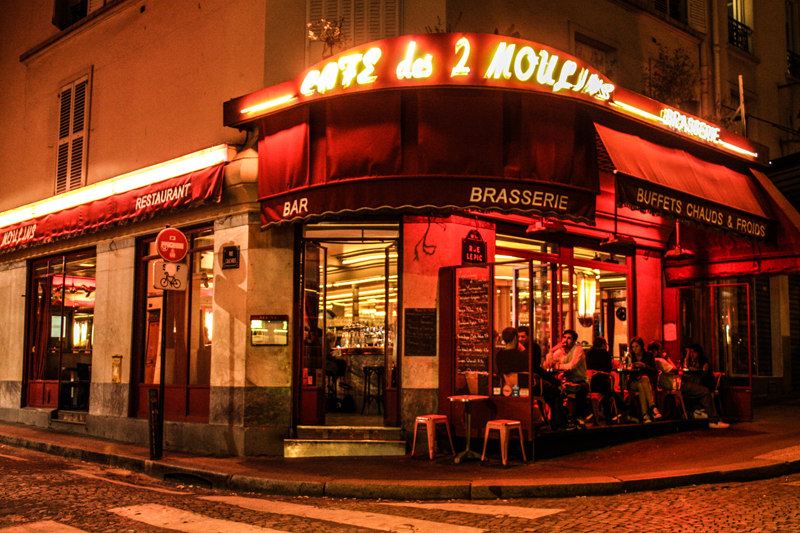 The French are supposed to be idle and not work-oriented. In fact they work 35 hours a week, only 5 hours less than in Russia. They would hardly linger without extra pay, or work for the “idea. They take their five weeks of vacation a year. 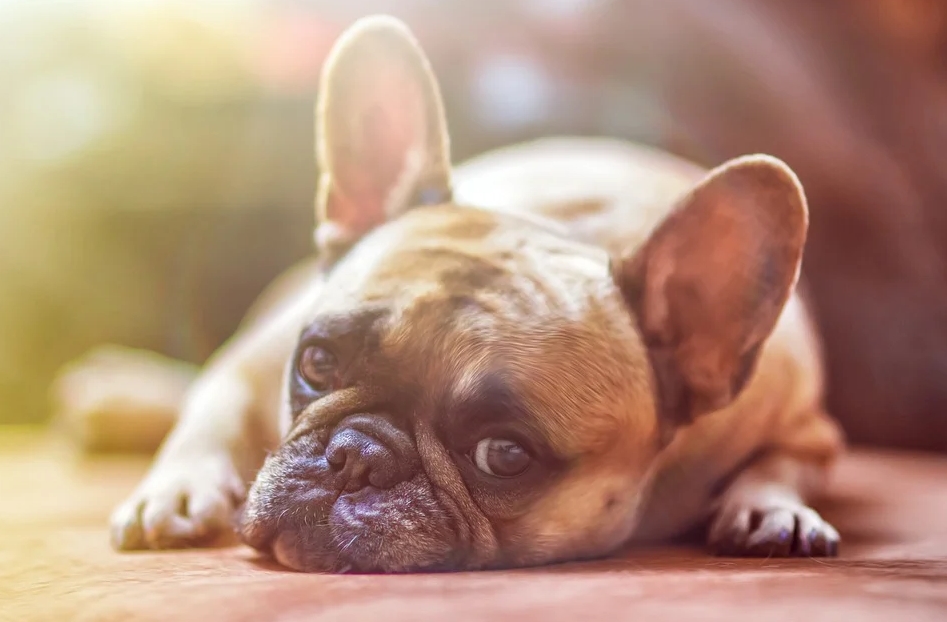 In fact, the French are not as lazy as the French bulldog in this photo. Source: cdn.pixabay.com

As tourists correctly point out, the French really love cheese and are willing to eat it for breakfast, lunch and dinner. A study of this issue showed that in a year, each resident of the country eats about 26 kilograms of cheese. 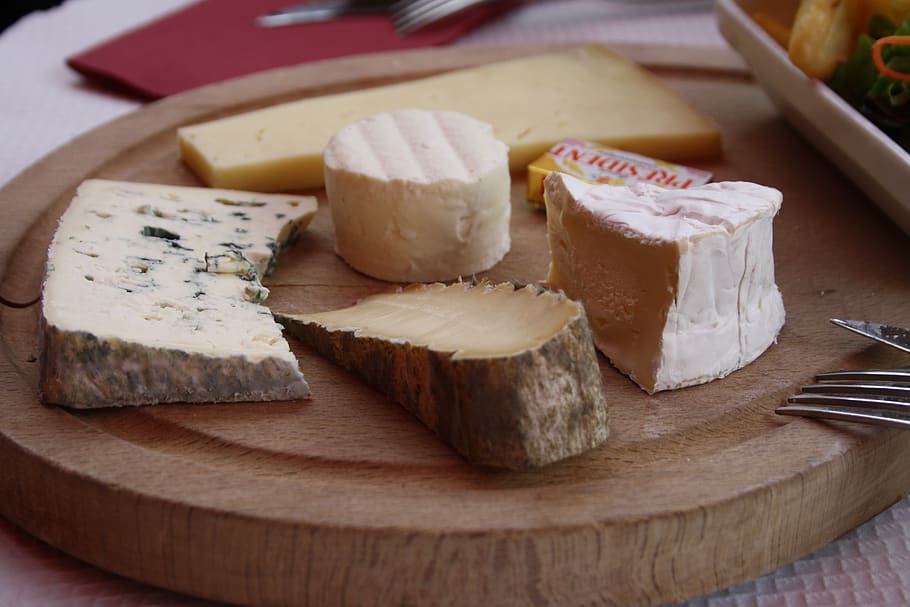 The English disparagingly refer to the French as “frogmen” for their particular fondness for the legs of this amphibian. But in fact, the French do not eat frogs very often, only on holidays, and in restaurants they are mostly ordered only by people from other countries. 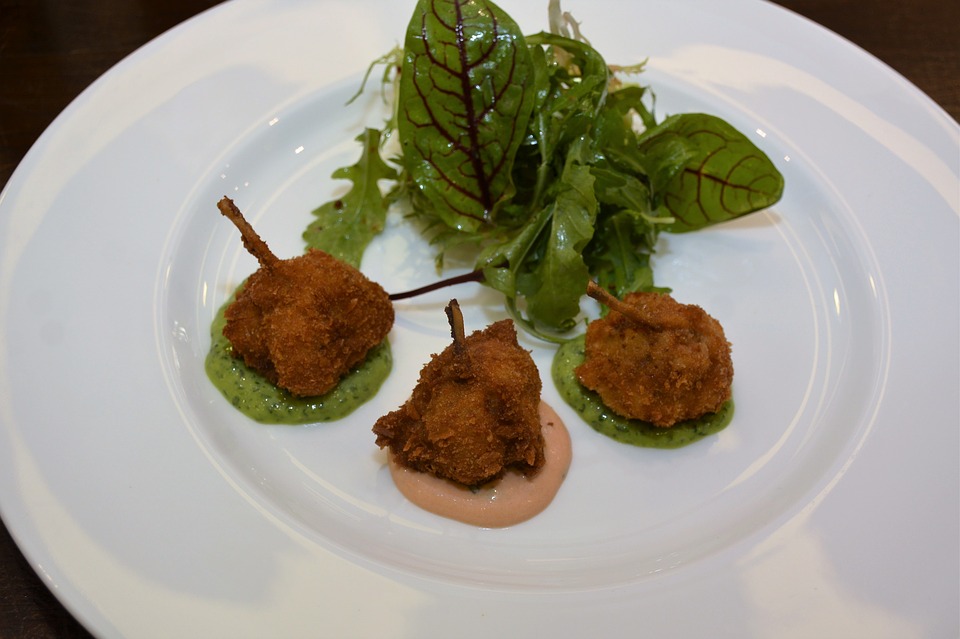 From old movies and books, people who have never been to this beautiful country have the mistaken impression that the French are not only extremely elegant men, but also wear red berets and scarves all the time. Crowning the image is the sailor’s cap, which in their way sounds like “marinière”. But this image is far from reality, fans of red berets in small numbers can be found only in Biarne. 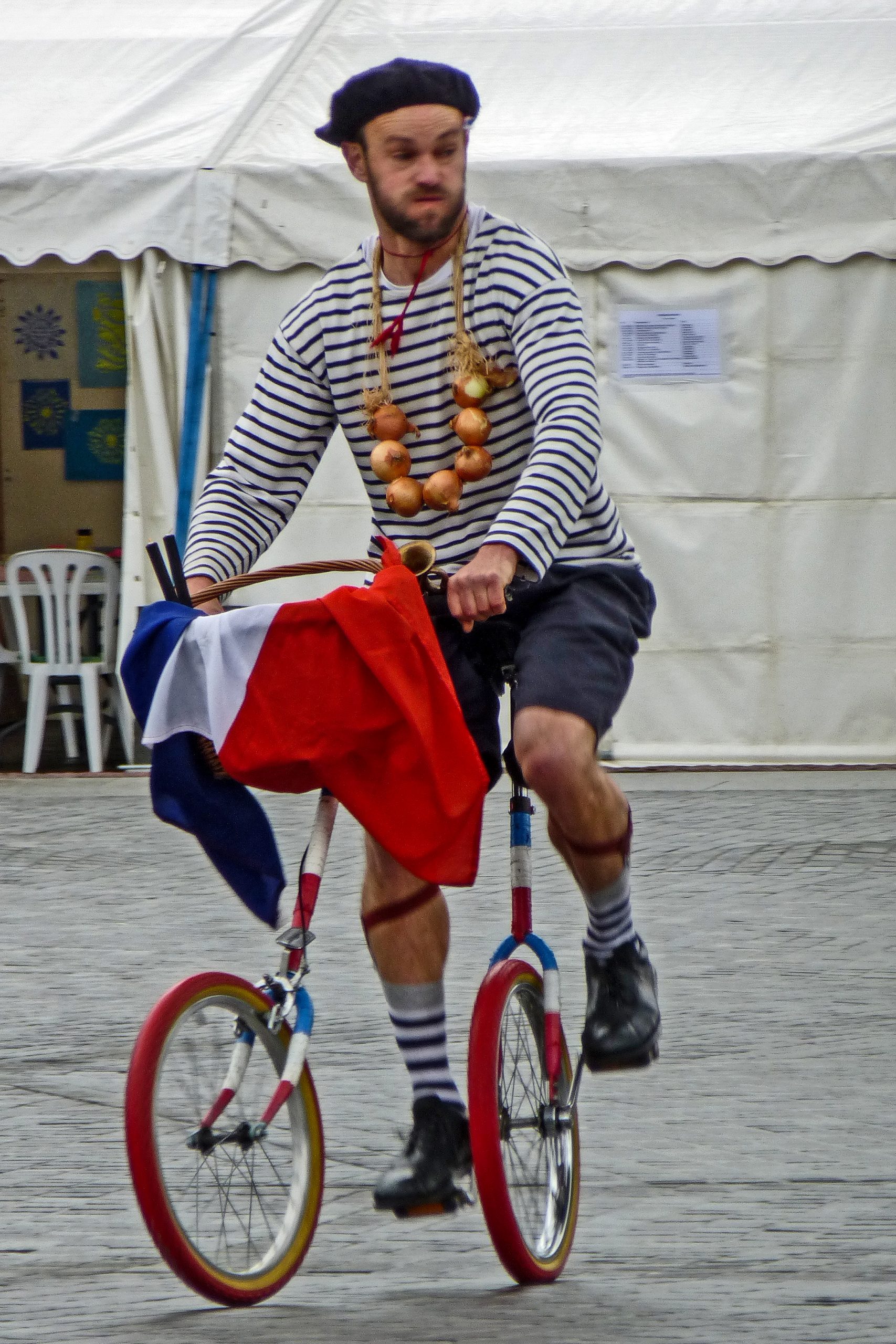 The classic image of a Frenchman in a sailor suit. Source: commons.wikimedia.org

Other people’s riches sting the eye

Some people think the French are very intolerant of other people’s success and wealth. In fact, they, like many of us, do not like it when someone shows off his wealth and behaves in an unseemly manner and feels he has every right to be. 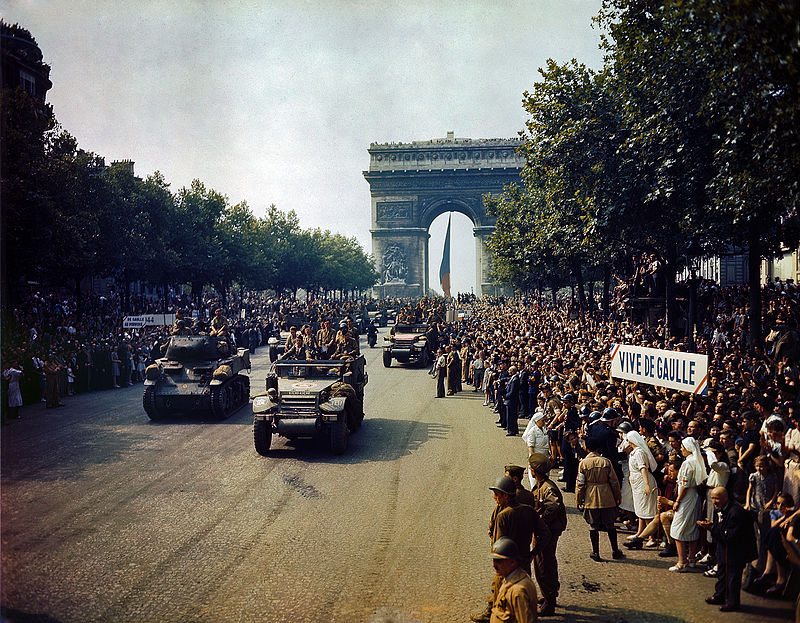 It is believed that the French do not miss a moment to criticize the Americans. And it’s not just about politics, but also about every little thing in life. But it doesn’t prevent the younger generation of 40 years old from watching American movies and TV series with great pleasure. 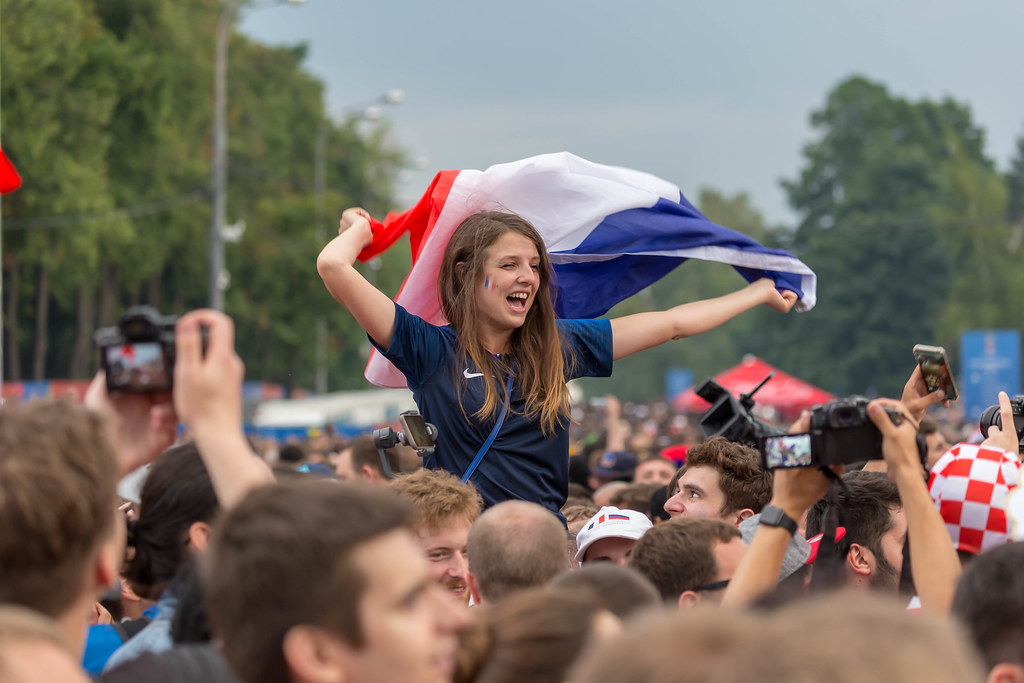 The main conservatives in the world

Those who live among the French know their extremely conservative disposition. If a Frenchman has chosen a bakery, a brand of clothes, a job, a car and a house, you can be sure that he will be with them, if not for the rest of his life, then as long as possible. They have a change of habitual way of life causes almost physical pain and for a long time knocked out of equilibrium.

This stereotype is absolutely wrong, it was formed thanks to the famous actresses who were forced, and still continue to maintain the figure in the ideal. Ordinary ladies often suffer from excess weight, but they can not be called unkempt. 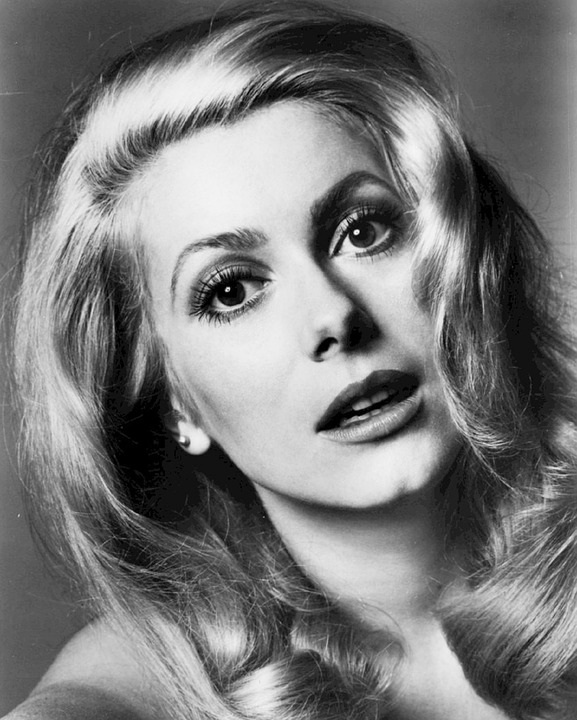 It is believed that the French are often rude to others, expressing their dissatisfaction in a strong word. In fact, they are not. Of course among them, as among any other people, there are some real rude people, but for the most part the French are quite friendly and polite. 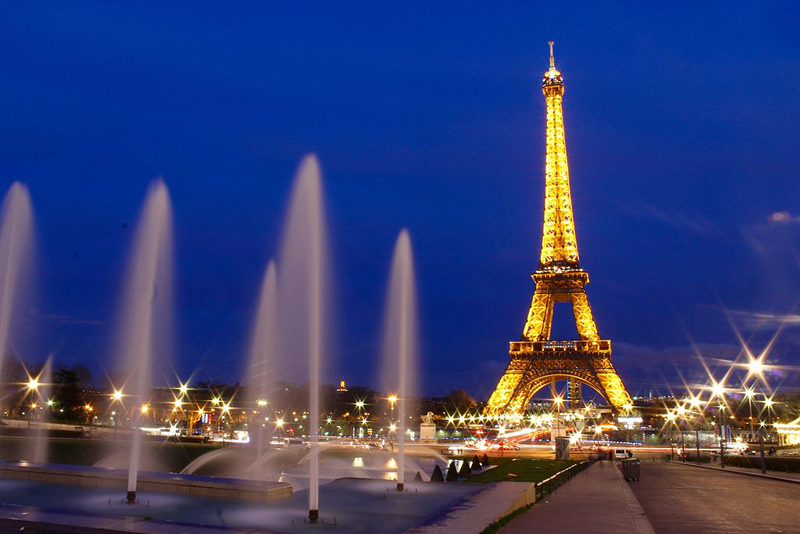 It is true that France is universally known as the most romantic country, attracting lovers and newlyweds from all over the world. How many proposals of marriage have seen in the history of the Eiffel Tower – just can’t count.

We told you about the most common stereotypes about the French. Some of them are true and some are complete nonsense. As in any other country, in France, there are people with different characters, behavior and their quirks. But for them we are exactly the same mysterious Russians with a full head of cockroaches. So trust only your opinion and feelings when evaluating other people. Good luck!

READ
The ancient gods of Sicily. What to see on an amazing island

10 stereotypes about the French and France 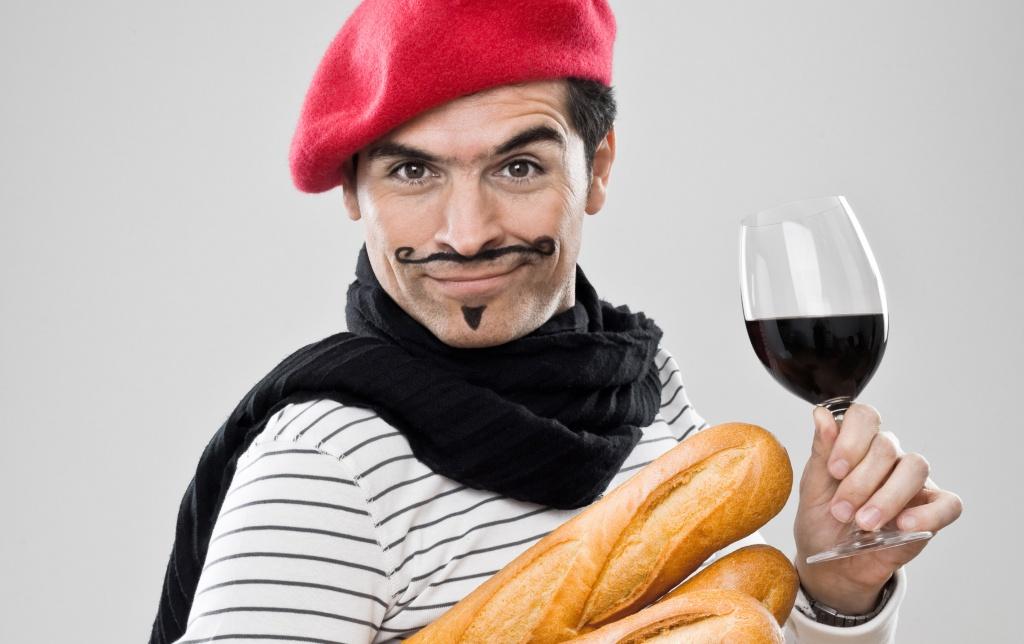 France is a country that has had a huge impact on popular culture. Almost everyone is partial to the magical beauty of the French language and the amazing color of the country. Because of this popularity of all things French there are many stereotypes about the country and its inhabitants. Some clichés have developed historically, others because of movies or books.

So here are 10 stereotypes about the French and France.

Around the world, the French are considered to be lazy grumblers, always dissatisfied with something, which often leads to protests or strikes in the country. Many people have this opinion because of the transport company SNCF. The people of France simply do not tolerate the arbitrariness of the authorities and want the authorities to hear them. And during their time off from strikes, the French indulge in leisure activities.

Of course, if you believe the statistics, the French work less than people in other countries, but this has no effect on productivity, and this figure in France is one of the best in Europe.

Foreigners believe that the French are unhygienic. Even the famous French perfumes were invented to hide the stench of an unwashed body. Most likely, they began to be used back in the days of Louis XIV (XVII-XVIII centuries): the king and his entourage used incense to destroy the stench.

But these are stereotypes, and in reality the French are hygienic, and this cliché most likely appeared due to the fact that in public toilets in France the norms of cleanliness and hygiene are not always respected.

Statistics refute the opinion about hygiene of the French: only 20% of people in France do not wash every day, 3.5% wash at least once a week, and 11% wash several times a day.

The third stereotype: French women do not shave

This cliché dates back to World War II. French women simply did not care about shaving, because the country was ruled by Germany. The people of France also have this stereotype: they think that Germans do not shave.

The favorite clothing of the French is a beret and a sailor’s suit, and they are forever holding a loaf and wine.

This stereotype probably came about because many artists and figures of art portrayed French farmers in this way. In addition, the beret was worn by most filmmakers until the 1980s.

Many foreigners cannot imagine the inhabitants of France who are not wearing a beret.

Residents of other countries believe that the French are always unhappy and rude about something. A survey conducted by the airline Skyscanner, showed that the French have the most unfriendly attitude to travelers. Of course, most of those surveyed visited the capital of France, and many residents of this city can be unfriendly. But still do not forget that France is not limited to Paris, and there are many other cities. Yes, the romantic atmosphere of Paris and the beautiful buildings are loved by many tourists, but France is also rich in beautiful landscapes, history, national cuisine and so on.

The sixth stereotype: elegance and sophistication

Many people think the French are refined and elegant.

Perhaps the huge number of museums, artists and other figures of art and science from France contributed to the emergence of this stereotype. Maybe French cuisine has also contributed to this cliché.

Paris is considered a major city for lovers of luxury, high fashion and romance. This stereotype about the French came about precisely because of the reputation of the country’s capital.

Many foreigners and foreign women regard the French as romantic and caring, and they have a reputation as “French lovers. French women are considered to be coquettish girls with fine taste, who easily open up.

READ
The 6 Best Beaches in Jamaica

This stereotype is primarily influenced by popular culture: books, paintings, clothes, movies, and so on.

This is a very old stereotype that came about because of Napoleon Bonaparte’s short stature. But over the last hundred years, the height of the French has seriously increased. The average male height in France is 1.76 meters.

They are taller than people in Germany, Jordan, and Japan, but shorter than Russians, Americans, and Swedes.

French pride aside, they stand out by smoking tobacco. Most foreigners think that the French smoke a lot, but this is not true: only about 30 percent of French residents use tobacco products. However, this statistic is slightly worse than other European countries.

Many people believe that the French are cowards, and will raise the “white flag” at any opportunity. This stereotype emerged during the Second World War, because it was then that Nazi Germany seized the entire territory of the French Republic in just a month and a half. For example, the capture of the Principality of Monaco and Luxembourg took 1 day, Belgium – 8 days, Greece – 24 days. For example, the same Britain resisted the Nazi bombing throughout the war.

The mockery of the French over this increased after Dominique de Villepin’s statement in which he reproached France for not participating in the Iraqi cause.

There are many more stereotypes about France and the French, but these are the most common among foreigners. Many of them have developed historically, others are influenced by popular culture.