Hanseatic City Stendal (German Stendal ) is the district center of the Altmark region, located in the state of Saxony – Anhalt, the former main city of the Old Brand (Altmark). Stendal is located 55 km north of the state capital Magdeburg and 120 km from the German capital Berlin. The population is just over 40 thousand people. Most of the residents of Stendal do not belong to any confession, the rest are members of the Evangelical-Lutheran Church.

The first mention of the city is associated with 1160. The Brandenburg Margrave Albrecht I founded a market in the village of Stendal, to which he then extended the Magdeburg Law. Excavations confirm the fact that development in the market area began in 1160. The city, located on important transport routes, quickly and successfully developed into one of the famous trading cities, which already in the twelfth century maintained the first ties with Lübeck.

At the division of the Brandenburg brand in 1258 between the brothers John I and Otto III, Stendal became the seat of the senior line of the House of Ascan (which died out in 1320). In the 13th century, the Guild of Seamen of Stendal emerged, which was engaged in trade within the North Sea and the Baltic Sea.

The first mention of St. Mary’s Merchant’s Church dates back to 1283. Several significant items have survived from the formerly very rich interior. The high altar from 1471 is considered to be the most beautiful carved work of its time in Northern Germany. Noteworthy are the chairs from 1508, which were created by local craftsman Hans Ostwalt. In 1566 the church received its church pulpit. Under the organ is a 16th century astronomical clock. But the two bells, “Mary” (diagonally 1.99 m) and “Anna” (diagonally 1.58 m), are especially proud. Both were cast in 1490 by the master bellmaker Gerhard van Wou of Kampen in Holland.

Around 1300 the city fortress was erected, and with it the Tangermünde Gate.

In 1338 on Bruderstrasse a gymnasium was built, one of the pupils of which was the archaeologist, as well as the educator, theorist and art historian Johann Joachim Winkelmann. In the center of the city there is a house of Winkelmann, which became a museum. Exhibitions devoted to archaeology and art history are regularly held there.

In the 14th century, a refectory was built on the grounds of the monastery cemetery, which today is the city library. On the site where in 1215 stood the Stendal fortress, in 1423 began the construction of the Cathedral of St. Nicholas.

In the fifteenth century, the Town Hall in Tägermünde was erected. The town hall was built over many centuries. At the beginning of the 15th century a red brick building without stucco emerged with the addition of a medieval court building overlooking the square. In the second half of the 15th century, an elongated trading post was added to the medieval court building. The town hall was enlarged by the end of the 15th century by adding the main wing, which faced the square. The appearance of the tract was changed during the Renaissance period in the 16th century and it was connected with other parts of the building by an arch. The well-preserved portal is noteworthy here. Inside the building are hidden some jewels. Besides the wonderful banqueting hall and today’s mayor’s office, the carved wooden wall with many decorations from 1462 in the council hall (today a small council hall) is worth mentioning.

In 1525 a statue of Roland was erected as a symbol of the city’s administrative and judicial independence, as well as to confirm its right to hold fairs and other events. In his right hand Roland holds a naked sword, a sign of authority. In his left hand he holds a coat of arms with an eagle and two squares with prongs. This is one of the two coats of arms of the city. The figure is wearing armor from the time of 1510-1535. The statue in Stendal stands in front of the Town Hall and belongs to the architecture of the XV century. In the city annually held festival Roland (Rolandfest).

The church of St. Jacob (Jakobikirche) is one of the three great churches of Stendal. Its current tower stands in place of the previous one, which was destroyed in 1808. The main parts of the interior of this church have been preserved to this day. Of particular note is the coloured sandstone pulpit, which was designed by Hans Hacke of Verben in 1612. The movable figure of Jacobus the Elder is the protector of pilgrims. The preceding structure was apparently the village church of the village of Stendal, which is mentioned in the document claiming Stendal as a town.

In 1849 a section of the Magdeburg-Stendal – Wittenberg railroad was opened, the same year the central station of Stendal was built.

In 1873 was built the main railway company of the city – the railway repair shops.

The Altmark Theatre, which was founded in 1946, is the cultural center of the town and of the whole region. In addition to its own theatrical productions there are regular tours of various musical and dance theaters. In addition the theater holds symphonic concerts, conferences and other events.

Not far from the Altmark Theatre in Stadtsee you will find the zoo, which was founded in 1952. The zoo contains more than 460 animals of 75 species.

Stendhal – the city of red-brick Gothic in Germany

The word “Stendhal” immediately brings to mind the world-famous writer Henri Beillet. This time, however, we are not talking about him, and his name is spelled a little differently, “Stendahl”, and the correct name is Stendal, not Stendal. The German city, on the other hand, is spelled “Stendal” and reads with an “S”, “Stendal”. There is nothing else in common between the city and the writer. 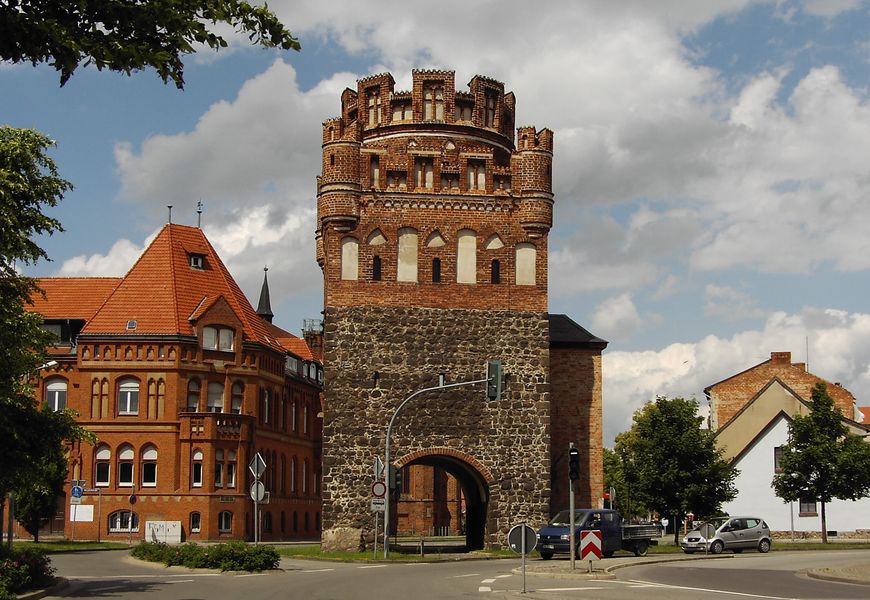 Stendal is a red-brick Gothic town in Germany

The city of Stendhal is not heavily publicized and not every tourist’s route through Germany passes through this city. This is partly because it was once part of the GDR, and all the cities that used to belong to the USSR are in partial decline and not as highly developed.

However, the city has much to be proud of and is worth seeing. Most of the buildings there are built in the style of red-brick Gothic, and the architecture of this place is quite interesting. In the Middle Ages everything was built of “bashtal”, i.e. red brick, and that made the appearance of Stendal very special.

It is worth seeing first of all the churches. The church of St. Mary is quite a large building, which is notable for its modest architecture, but lavish interior decoration. There are luxurious altars, ancient tombstones and much more. After this church you can go to the church of St. Jacob. It does not contain such a large number of antiquities, but they are still significant and interesting. There is also the church of St. Nicholas, which, above all, is interesting because a medieval prison adjoins it directly. The idea was probably to re-educate sinners on the spot.

READ
Where to go in Yalta - 45 best places for tourists 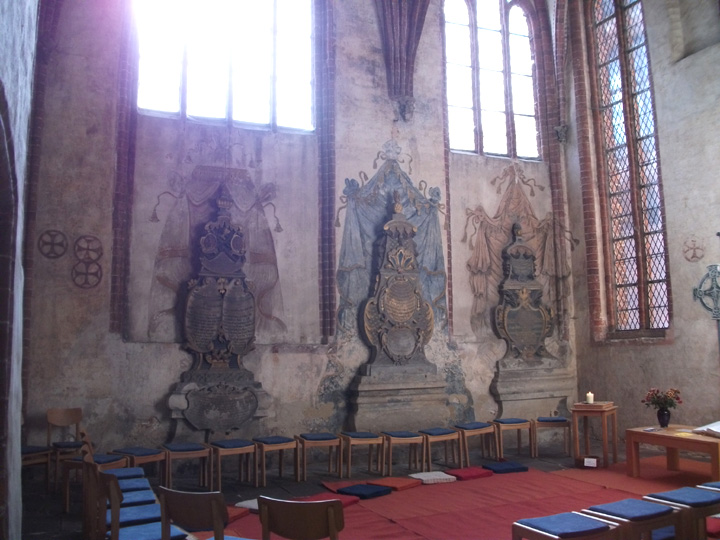 Stendhal – the city of red-brick Gothic in Germany

Stendal does not have a large number of mansions as usual. This is probably due to the fact that the city, formerly Hansa, gradually re-qualified from trading to industrial. There were more workers than wealthy merchants, who could afford to spend money on fancy houses.

Of course, the crowded place in Stendal is the market square, which looks pretty dignified. It’s a nice place for a couple of good shots of the towers of St. Mary’s Church peeking out from behind the courthouse, which is located right there.

Stendal has its own monument to Roland , the third highest in Germany and looking rather old, but in fact only a copy made in 1974. But Roland at 7.8 meters still looks impressive. Driving through the city, you should stop or at least admire two beautiful towers, Tangenmünder, which was built from 1440 to 1450, and Wenglinger, which was built right after the first one also for 10 years, from 1450 to 1460. 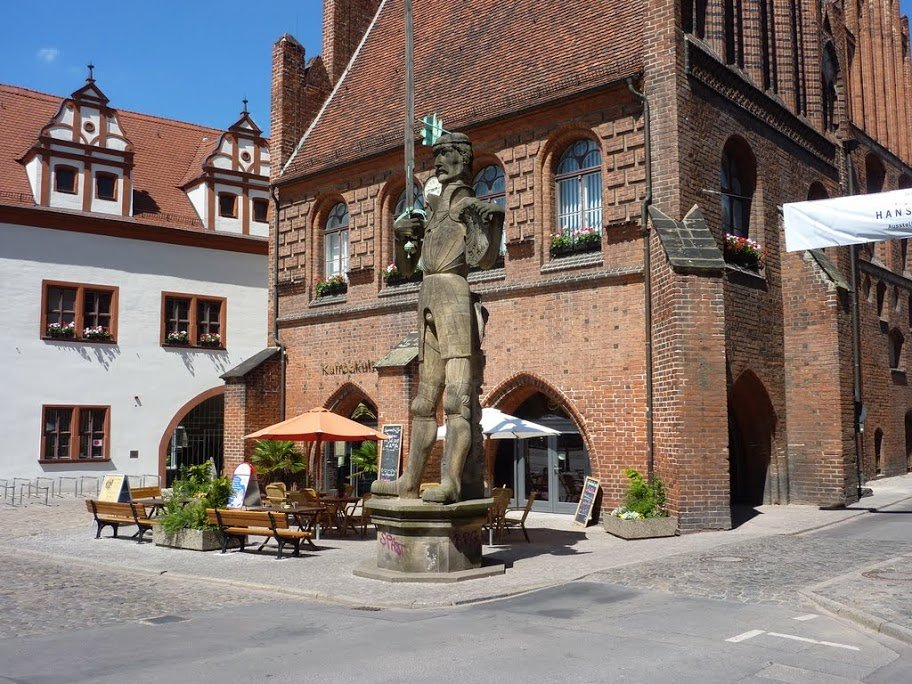 Stendal is a red-brick Gothic town in Germany

In general the city is beautiful, but if the local authorities undertook it, it could become even more beautiful. After all, even in the center there are several abandoned buildings, claiming to be monuments of architecture, of course, not outstanding, but very attractive.

Finally, you can walk along the earthen rampart that was made around the Old Town. The rampart is low and mostly reaches only one meter, but in some sections it can reach four. The rampart is now a city park. It is interesting that right here some citizens have garden plots. It looks rather unfamiliar, like a Soviet dacha in the middle of a park, but better maintained.

Stendal also has its own little river, but it’s very small, no more than 3 meters wide, and very important. Only thanks to it, two local ponds, one with the usual name “City Lake” and the other with the more beautiful “Swan Pond”, are filled with water. In fact, however, the river could be ennobled so that tourists would pay more attention to it.

READ
The 25 best sights in Gagra - description and photos

But the Germans, in general, are not strongly attached to the flowing water, as if they do not see how much more colorful and picturesque the landscape becomes if the river flows through it. That’s why even the facades of the houses don’t face the rivers, but the streets. Although it would be much more pleasant to contemplate the river, albeit small, than the cars passing under the window. But this is a peculiarity of Germans and Stendhals in particular, perhaps in the future this will change and the city will become even more attractive.