Capital city: Castries. Official language: English, but a large part of the population speaks a local dialect of French – Patois. Population: about 165 thousand people, 90% of whom are black. System of government: a parliamentary monarchy. Territory: 616 sq. km. Geographic position: St. Lucia is a volcanic island about 34 km south of Martinique and 145 km northwest of Barbados. The island, dreamed of by travelers of all times, is only about 43 kilometers long and 22 kilometers wide. St. Lucia, which is shaped like a mango or avocado fruit, is washed by the Atlantic Ocean to the east and the Caribbean Sea to the west. The dominant religion is Christianity (Catholicism). Time: 8 hours behind Moscow in summer and 7 hours in winter.

The main wealth of the island are fruit plantations, laid out in its wide fertile valleys. Bananas, coconuts, mangoes, cocoa, oranges, and grapes, which fill the island with sweet smells, still form the basis of St. Lucia’s economy. Most of the island, however, is occupied by mountain ranges with several prominent peaks: the island’s highest point, Mount Jimi (950 meters), the Soufrière volcano, and the inherent symbol of Saint Lucia, the twin Python Peaks. Evergreen rainforests, sandy beaches and hot thermal springs complement the rugged beauty of the mountains. In the Caribbean Sea, at the center of the Lesser Antilles archipelago, there is a volcanic island with a rich and picturesque nature: tropical forests with giant ferns, wild orchids and rare species of parrots. St. Lucia is famous for its medicinal mineral and sulfuric springs, waterfalls, sandy beaches and unique descents into the craters of volcanoes. There is an annual carnival in February, a jazz festival and sailing regattas in May.

Popular things to do: beach holidays, regattas, festivals, yachting, fishing, diving, and windsurfing. Things to see: Carnival in February with parades and dances. Jazz festival in May.

The bizarre drawings, preserved on the surface of the vaults of rocks that are hard to see in sunlight, are evidence that the indigenous inhabitants of Saint Lucia were the peaceful Arawak Indians, later displaced by the aggressive Caribs. In those early days, St. Lucia had the rather poetic name of Iguana Island. However, the history of the island’s discovery by Europeans is still obscure. For a long time, it was thought that St. Lucia was put on the world map by Christopher Columbus in 1502. However, the latest research cast doubt on the very fact of stay on the island of the legendary discoverer. The most popular hypothesis today is that St. Lucia was discovered by Juan de la Cosa, a little-known navigator who traveled for some time with Columbus’ expedition. According to some reports, the sailor’s maps of El Falcon, marked in 1499, coincide with the geographic coordinates of Saint Lucia. Nevertheless, it is known for certain that the first European settlement appeared on the island only in the middle of the 16th century. Its founder was an enterprising pirate known as Stonefeet, whose gang attacked Spanish ships that passed by the pillaging camp on Pigeon Island. In the early seventeenth century, an English ship that went astray docked on the island. The Englishmen did not hesitate to buy land and shacks from the locals, but the entire crew soon left the island. And the first town on St. Lucia was founded by the French in 1746. The British, realizing their loss, claimed the island, and a years-long struggle for St. Lucia ensued, during which the island changed hands fourteen times. Witnessing the carnage that took the lives of most of St. Lucia’s native population, today its majestic and somewhat grim forts are a sight to behold. In 1816, the island was granted the status of a British colony, and today it is an independent state within the British Commonwealth.

READ
What to see in Sondrio, Italy

Climate: tropical. Average temperature of the year is +29С. The dry season lasts from January till April; the rainy season is from May till August. The amount of precipitation depends on the altitude of the area above sea level. Strong hurricanes and earthquakes are possible in St. Lucia. Electricity: 220 V. Entertainments: yachting, catamaran trips and boats, windsurfing, diving, sea fishing, jeep safaris. Currency: Eastern Caribbean dollar. Visa: Citizens of RussiaB do not require a visa for a trip of less than 30 days.

St. Lucia – a tropical paradise under the pointed peaks

The Caribbean is made up of dozens of tropical islands . They resemble each other, but their history has been shaped by different countries. Many of them are rarely heard of, though they won their independence long before many countries did. St. Lucia has been an independent country since 1979 .

The island, only three percent the size of Romania, suffered a rather common fate in this part of the world: white settlers displaced the native Indians and brought African slaves to work the plantations in their thirst for profit. Most of the islanders are the descendants of former slaves, only about one percent are white, and there is no trace of the Indians, although they resisted the first Europeans for a long time. They were only conquered by the French in the mid-17th century. 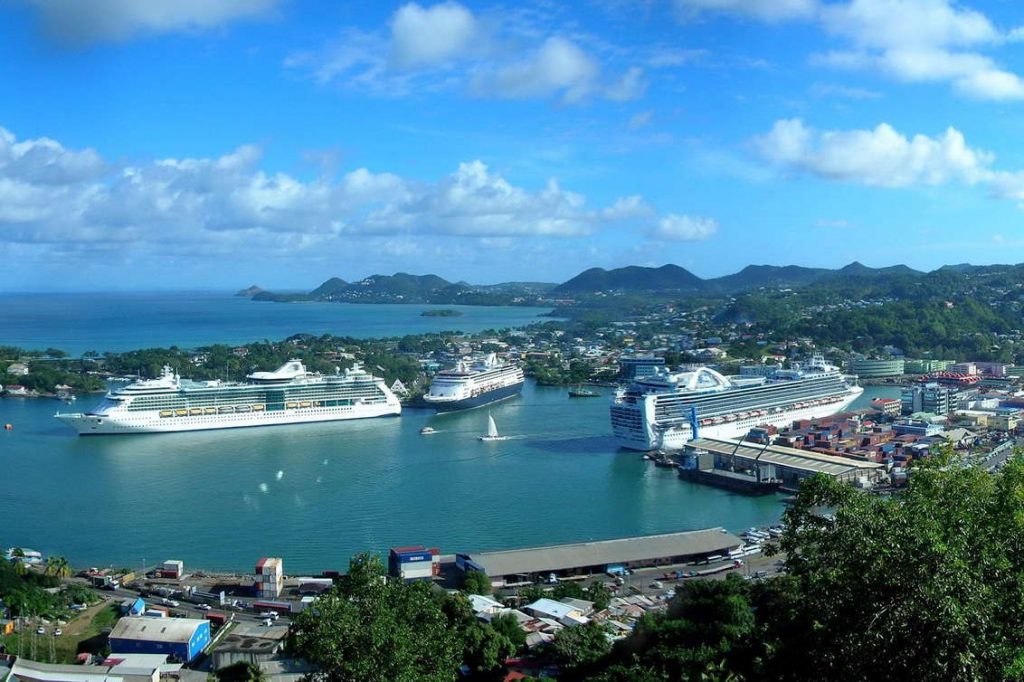 St. Lucia – a tropical paradise beneath the pointed peaks

Creole even among politicians.

The British and French were for a long time alternately masters of the island. Although the British eventually won, the Catholic religion prevailed. With the last British colonizers, administration was left to the Left and English became the official language.

The locals, however, speak Creole along with it. It is a spoken language based on French, with the addition of many African words. Creole is spoken in all the former and current French overseas islands. The language is also alive in written form, and in recent years it has even become popular with St. Lucian politicians. It is also a way of ingratiating yourself with voters. You can quickly endear yourself to the locals with the Creole phrase, “Sa ou fe – how are you?” And the answer is, “Mwen la – good!” 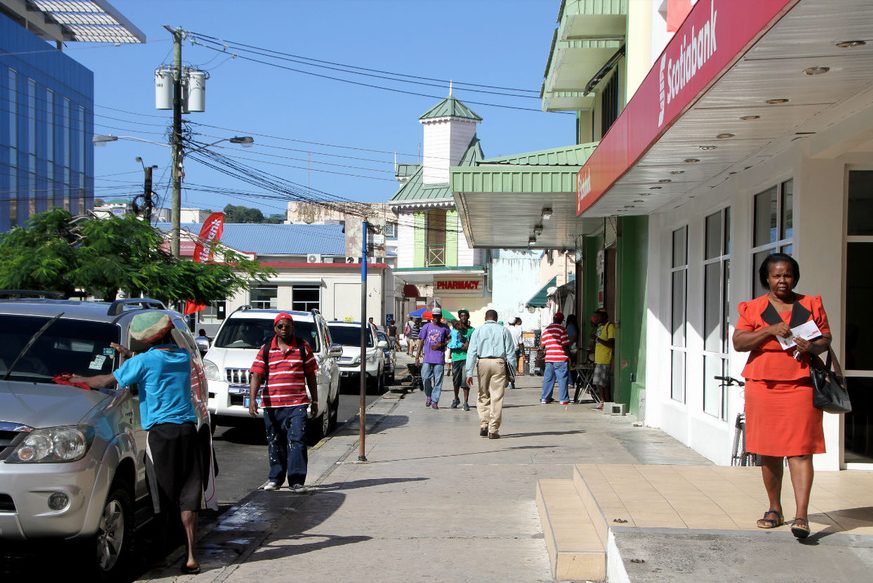 Creole even among politicians.

St. Lucia is just one of the many small Caribbean islands . Soufrière, with several well-preserved colonial houses, is one of the most pleasant places to explore the island. It is located in a small bay with a sandy beach at its edge, and more attractive places can be found in the surrounding area.

Tourists will be impressed by the Diamond Botanical Garden on the outskirts of the city. Here you can see many interesting tropical plants, including fruit trees. In fact, it’s hard to tell where the landscaping ends and the forest begins. There is colorful vegetation everywhere on the island . The garden is laid out as part of an old plantation. A picturesque waterfall and a small spa with thermal pools on the edge attract attention. It is said that the resort was popular among the French colonists, it was visited by Napoleon’s wife Josephine. The colorful waterfall became world famous much later – it was featured in one of the Superman movies. 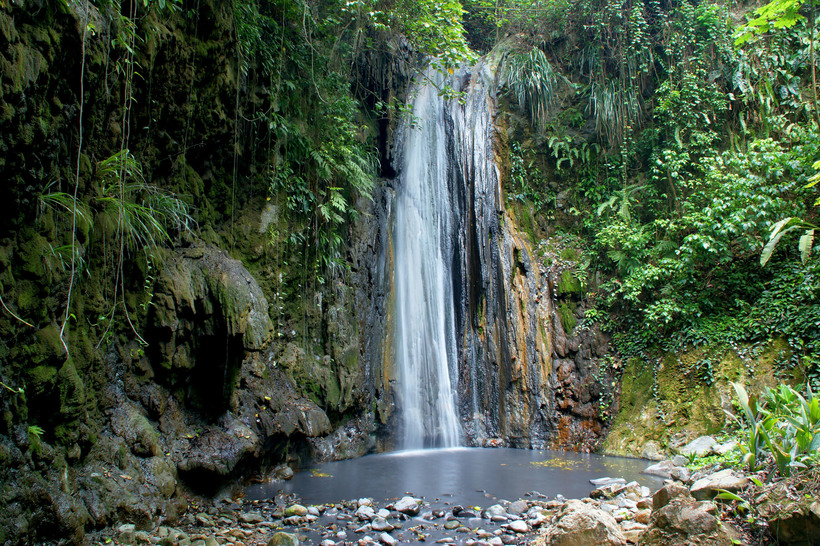 In the shadow of the Pitons.

Tourism, along with agriculture, is the island’s most important economic activity . St. Lucia is visited daily by large cruise ships, which bring more than half of all visitors. Ships find refuge in a safe and deep harbor near the capital, Castries.

The arrival of a large ship, larger than the largest block in the city, has a major impact on daily life . Several thousand tourists instantly fill the small town. Prices in the market skyrocket, and cab drivers and other transport operators rub their hands together. Many tourists prefer to rent a car . The bus service around the island is too slow for foreigners with only a few hours to spare. But with a rental car and a guide you can leisurely visit at least the main attractions: the sandy beach, fringed with coconut palms, waterfalls in the rain forest and active volcanic area with hot springs of mud and sulfuric fumaroles.

Two of the Caribbean’s most recognizable hills are Little Python and Big Python. Their pointed peaks are a must in brochures and postcards and have even become a trademark of the local brewery that brews Piton beer. The pointed peaks are stylishly depicted on a blue national flag . They are just under 1,000 meters high, but the steep slopes and poorly groomed trails make the climb unbearable for hours. 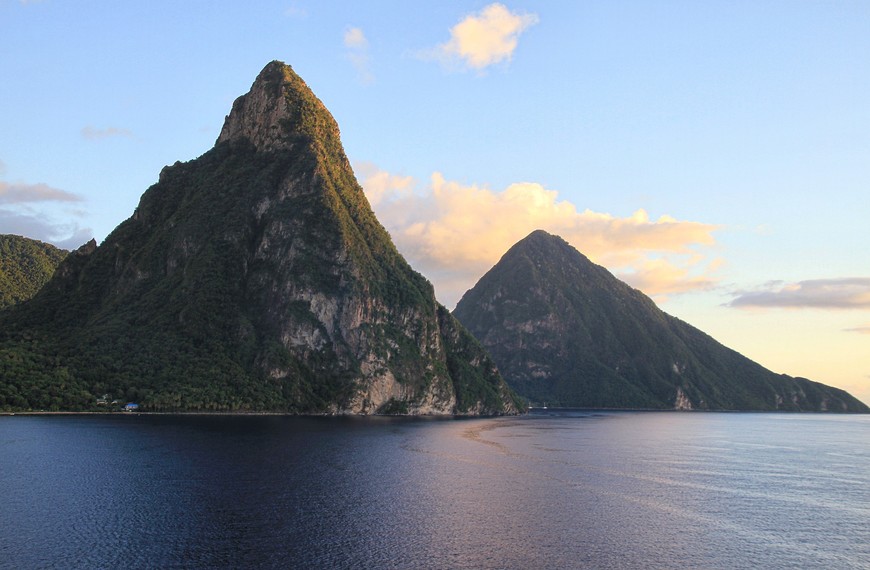 In the shadow of the Pitons.

By car to the volcano

Those coming for at least a week will often stay on the northwest side of the island, where the sandy beaches are most plentiful and where several hotel and apartment resorts have sprung up around Marigot and Chok Bay, aimed at wealthier guests.

For a truly unforgettable vacation, it is worth heading to the more sparsely populated south, especially around the aforementioned pointed peaks. In many places you can follow hiking trails that meander through the forests in a completely carefree manner, as there are no animals dangerous to humans.

A visit to a former volcanic crater will be a special experience. Although it is heavily overgrown and does not even resemble a volcano in shape, the hissing steam, bubbling mud and white smoke suggest that something is still going on under the surface. The crater is accessible by car, and locals boast that they have the world’s only drive-in volcano. 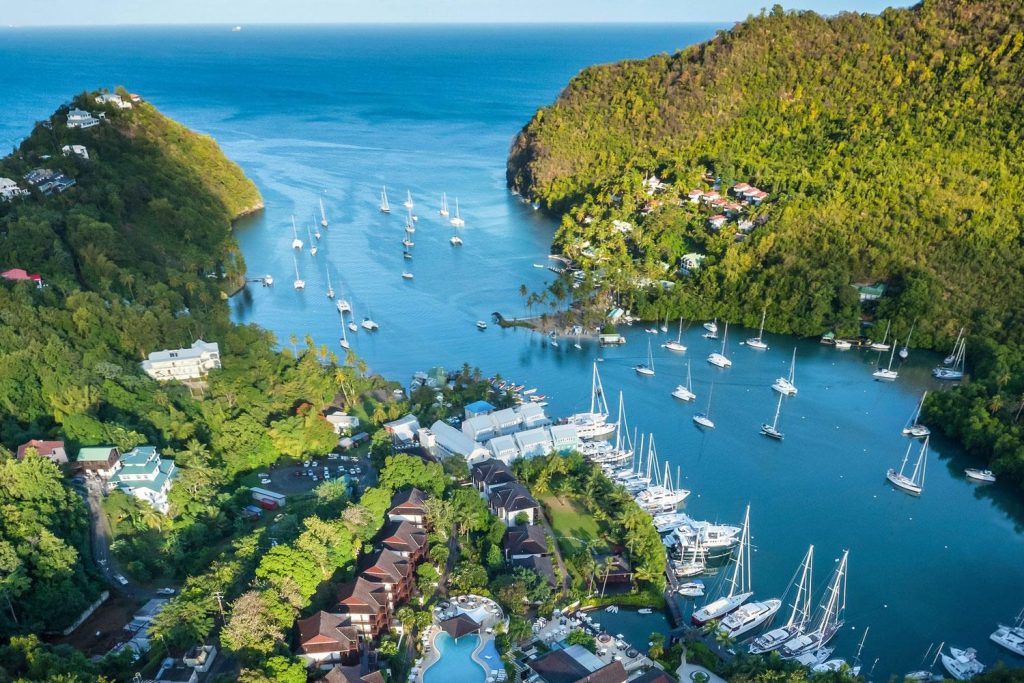 By car to the volcano

A trip to a plantation

It is worth a stop at one of the plantations, which are increasingly seeking to earn extra money, meeting tourists. There you can learn about the different cultures. Among other things, see what you can make from coconuts, one of the most important crops for the islanders, along with sugar cane, cocoa, and various tropical fruits. Including bananas, although they are becoming increasingly difficult to sell due to cheap competition from South American countries.

Friday is island party day in many places. Some have Caribbean music and lively street parties in the evenings. Of course, there are also drinks for sale and dozens of freshly baked goods booths. One of Gros Islet’s most famous and attended street parties has been held for two decades. But its popularity has led to it being organized elsewhere on the island . In some places, they are called “fish fiestas” because they mostly serve fried fish. 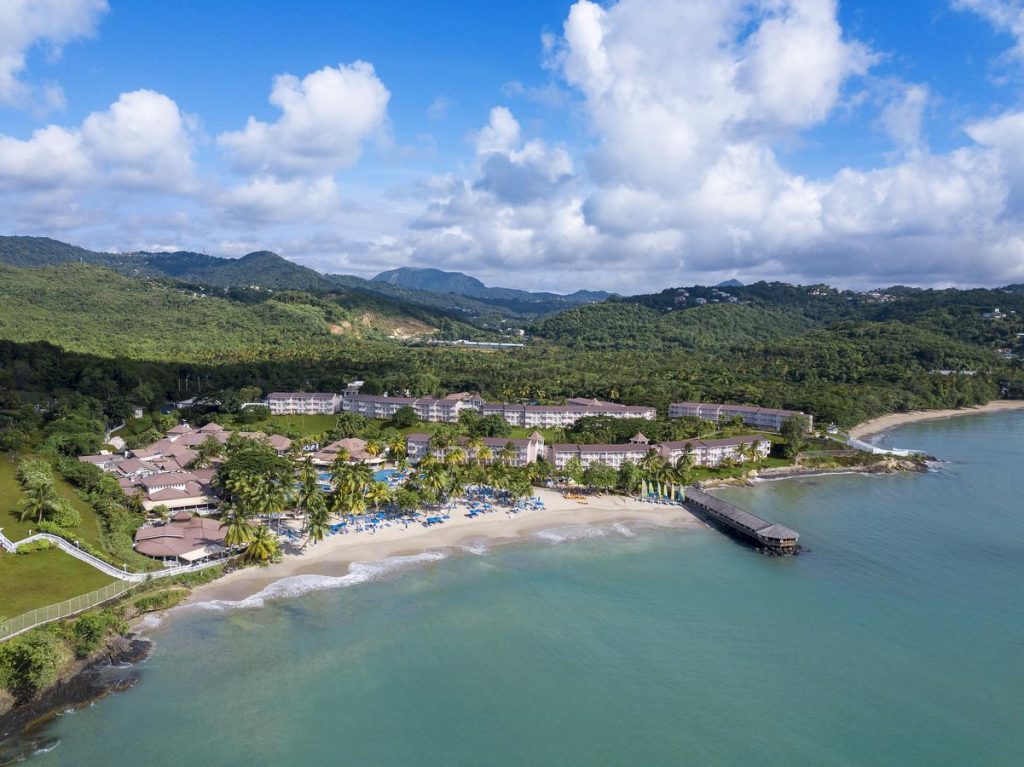 St. Lucia is a poor island and sluggish island life is occasionally shaken by the occasional strike . Most of the year the island is the tropical paradise you see in the tourist brochures. The inhabitants of the island rarely attract the world’s attention . But despite their small size, they boast two Nobel Prize winners: William Arthur Lewis won the Nobel Prize in Economics in 1979 and Derek Anton Walcott in Literature in 1992. Both are commemorated by the installation of a memorial in one of the capital’s squares.