There is a quiet and cozy resort town of Dambulla in Sri Lanka – there you can rest quietly, away from the ubiquitous modern hustle and bustle. The main attraction of the resort is the Temple of Dambulla – it is located on the southern outskirts of the city, on a mountain 350 meters above sea level. 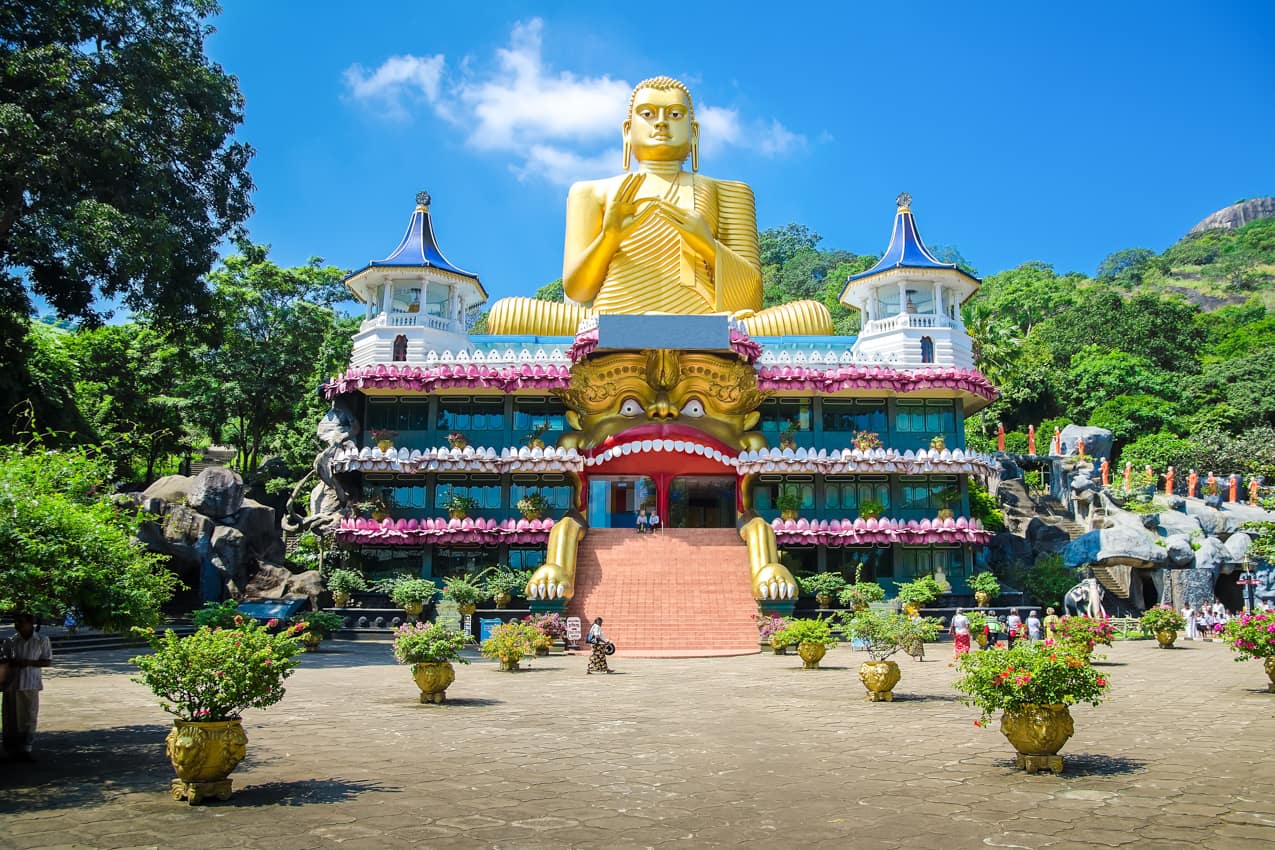 To visit the temple was an interesting event, not just walking through the grottoes among the many sculptures, you need some knowledge and creation of a certain mood. This will help to better feel the atmosphere of an unusual place in Sri Lanka and will multiply the impression of everything you see.

What is the Dambulla temple complex 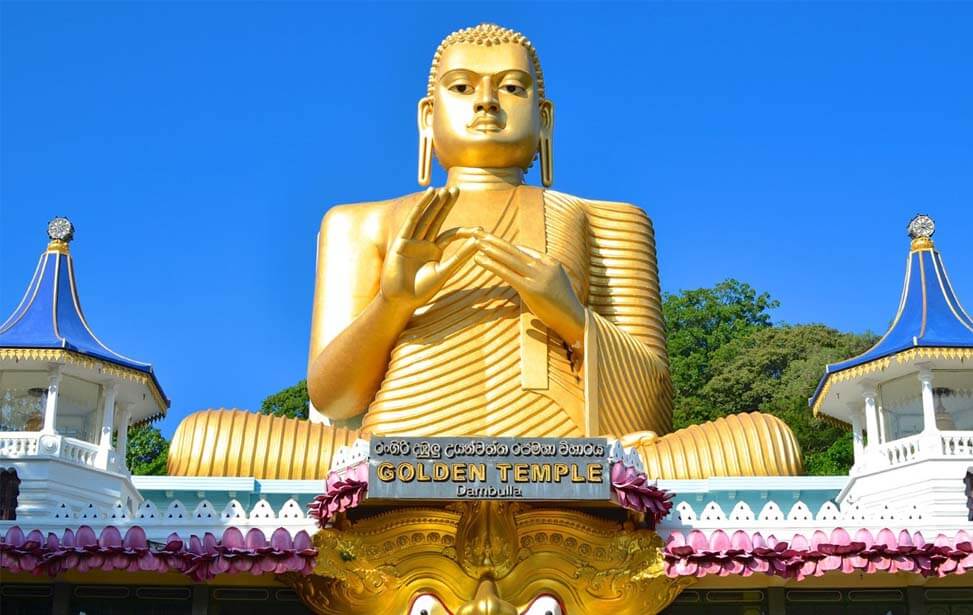 To begin with, it is worth clarifying that contrary to popular belief, this famous landmark is nothing but two completely different temples. The first, the Golden Temple of Dambulla, is a relatively new construction, just over 250 years old. The second, the Cave Temple, is an ancient monastery complex, the age of which scientists still can not establish exactly, naming only a rough figure: 22 centuries.

These temples in Sri Lanka united into one complex, which has been recognized as a UNESCO World Heritage Site.

The Golden Temple is located under the mountain, next to the road, parking lot and bus stop. This building houses a variety of administration offices and the Museum of Buddhism. The museum exhibition consists mainly of gifts given to the temple in different periods, pictures of the leaders of the monastery and information about them, as well as sculptures of the Buddha and paintings with the history of his life. 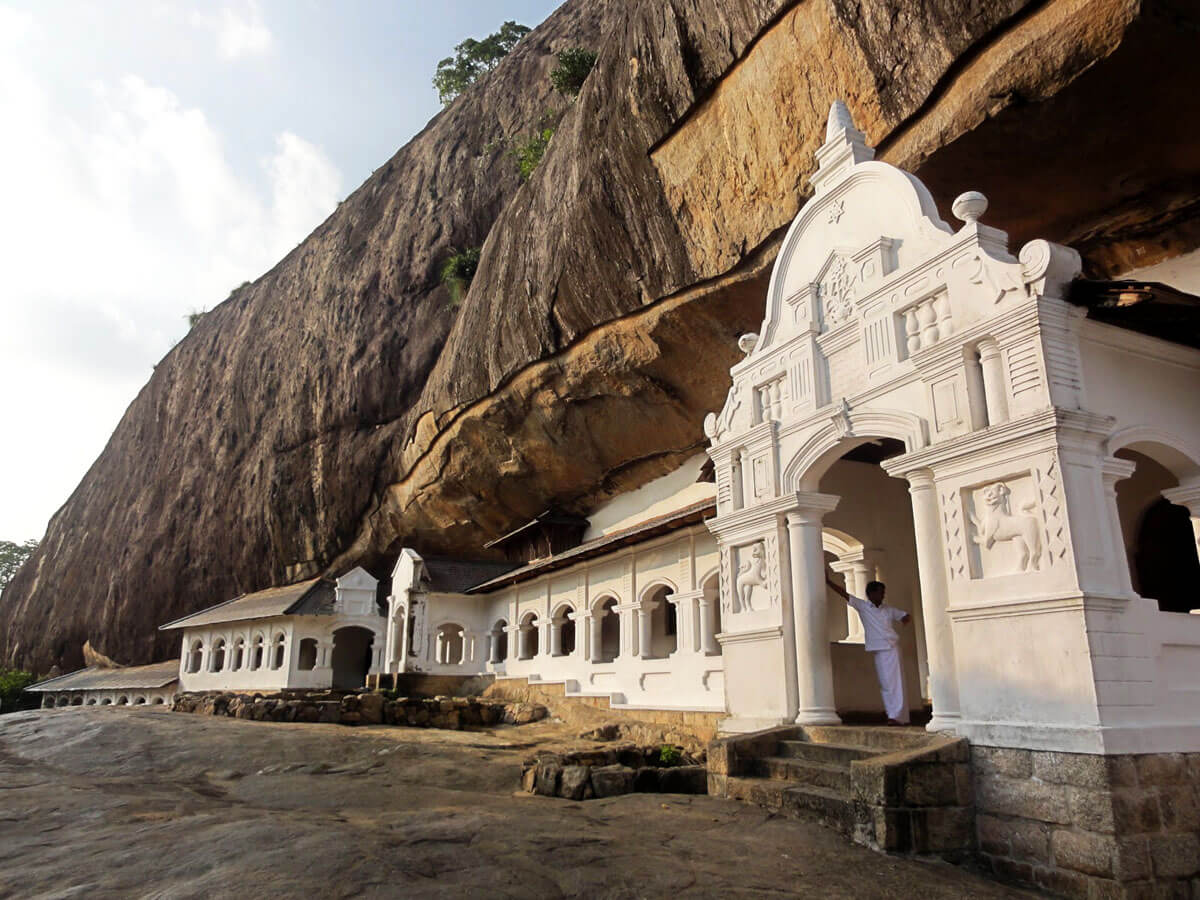 To get to the Dambulla Cave Temple, you have to climb the steps. This temple consists of 5 main caves, open to tourists for viewing, as well as a large number of grottoes of no interest due to their lack of paintings, sculptures and other valuables. The steps lead to a platform from which a snow-white colonnade under a steep wall can be seen, behind which are the temple caves:

And now a little information about each of them. 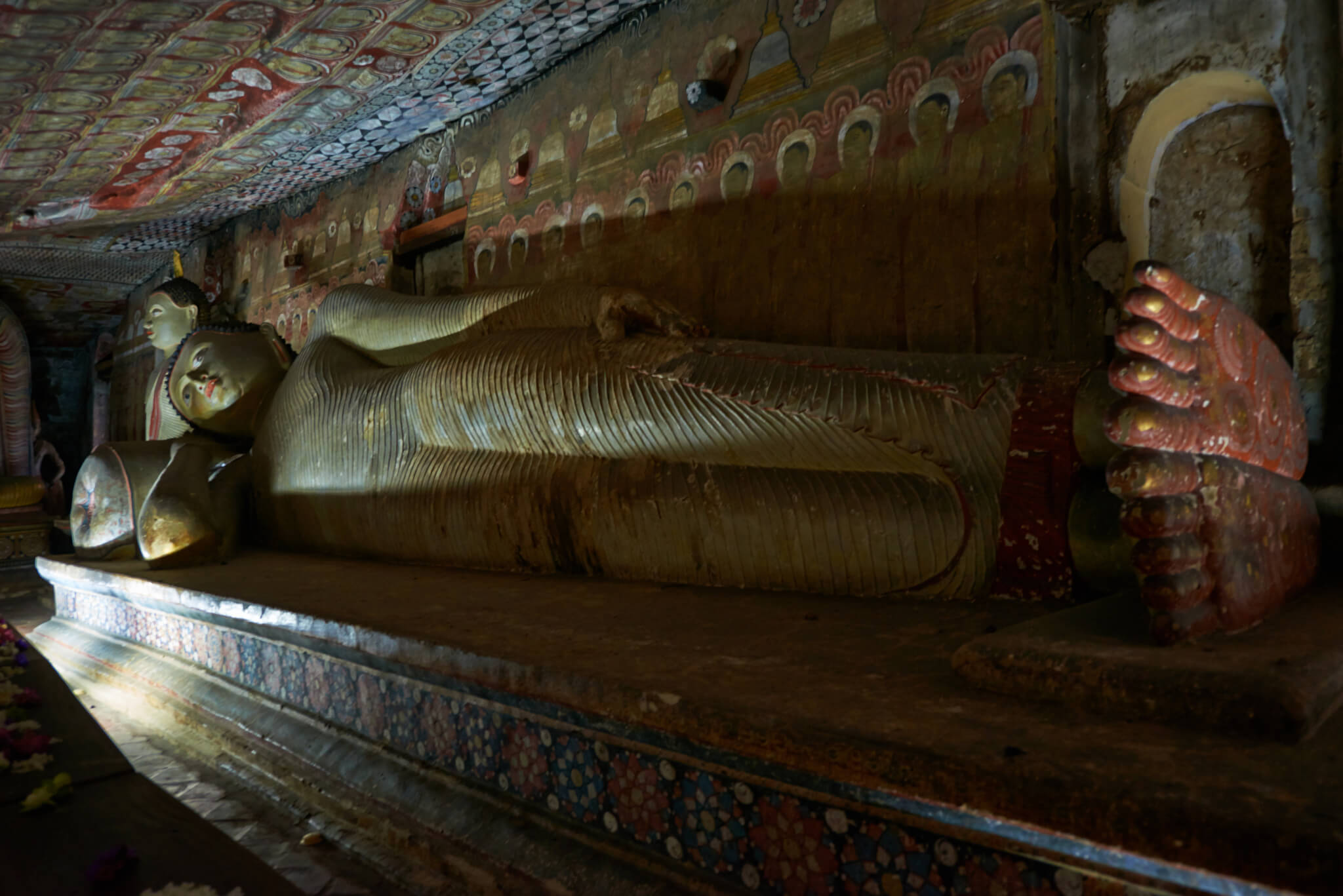 The first thing a person who enters this cave sees is a huge 14-meter sculpture of a reclining Buddha occupying most of the space. It is carved out of natural rock, with its entire length at the back, it remains connected to the rock. 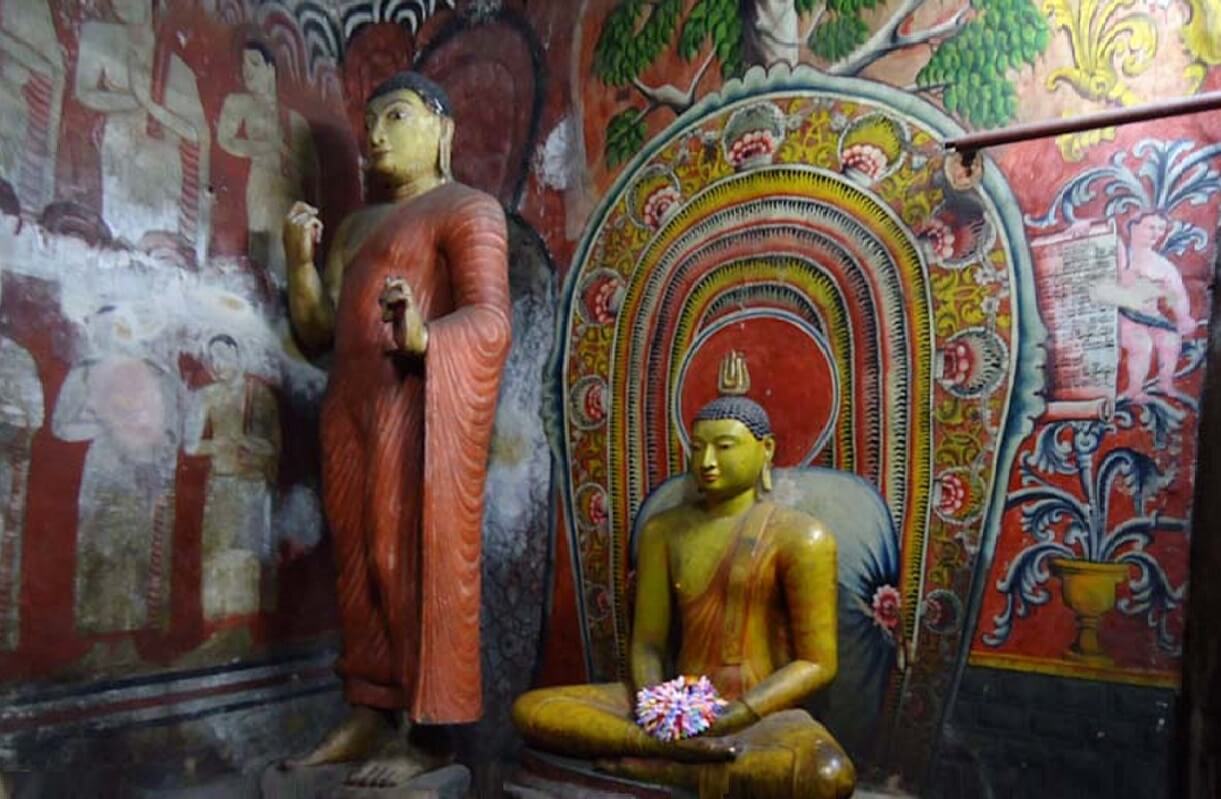 There is not much space in this sanctuary. Pilgrims and tourists who want to have a good look have to squeeze together.

Pilgrims constantly gather at Deva Raja Vihariya and attendants bring food offerings to the Buddha. Candles and incense are always lit, making the walls very smoky and the paintings almost indistinguishable. Nevertheless, on the left side of the Buddha, though poorly, you can see some episodes from his life. 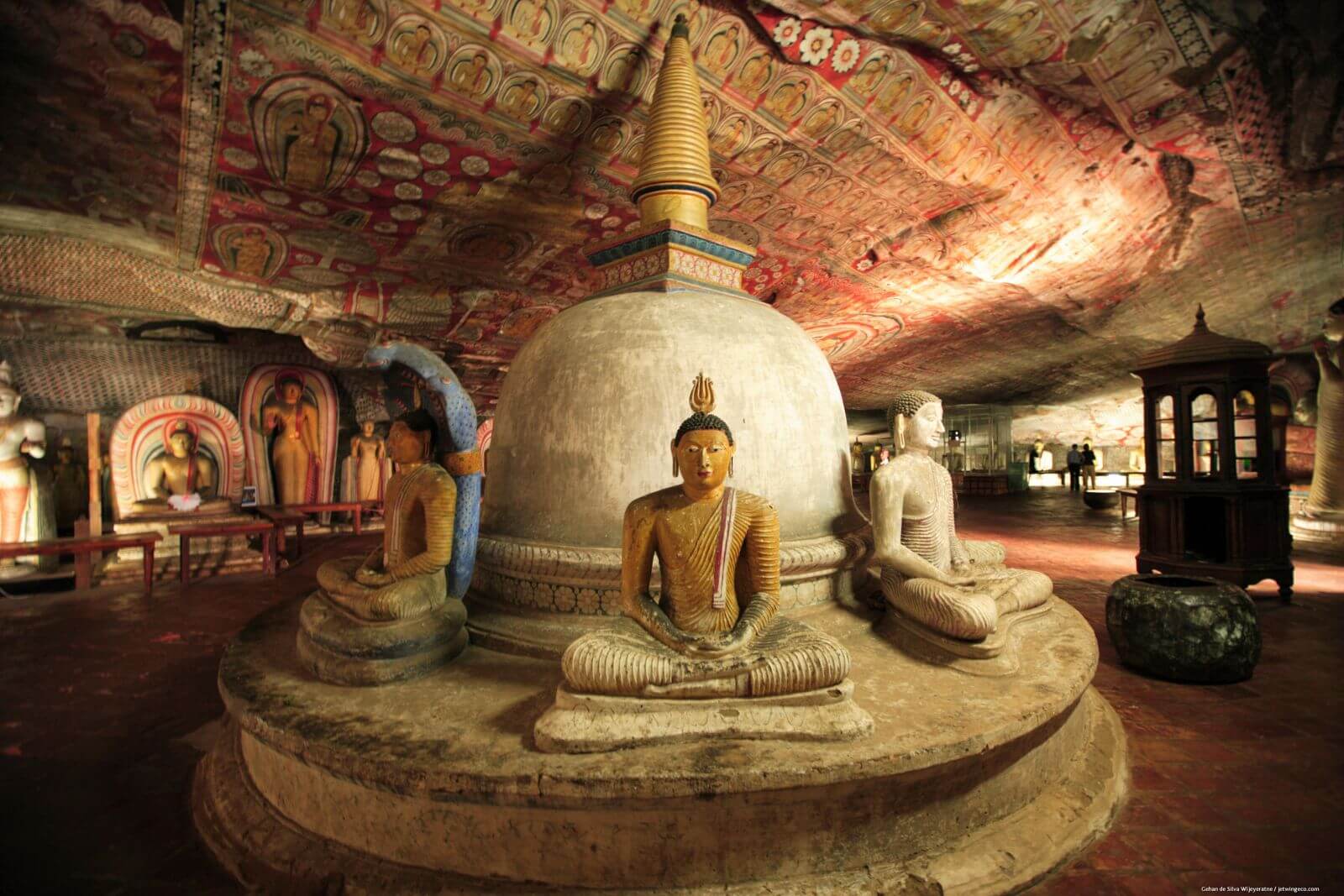 The largest, the King’s Cave, is 52.5 m long and 23 m wide, while the height, starting at 6.4 m, gradually decreases and at the bottom of the cave its vault turns into an arch.

At the entrance there are stone statues of gatekeepers on both sides.

On the right side of the entrance, on a wide round pedestal, are the stupas which are 5.5 m high. Around this pedestal are four figures of Buddha sitting on cobra rings. 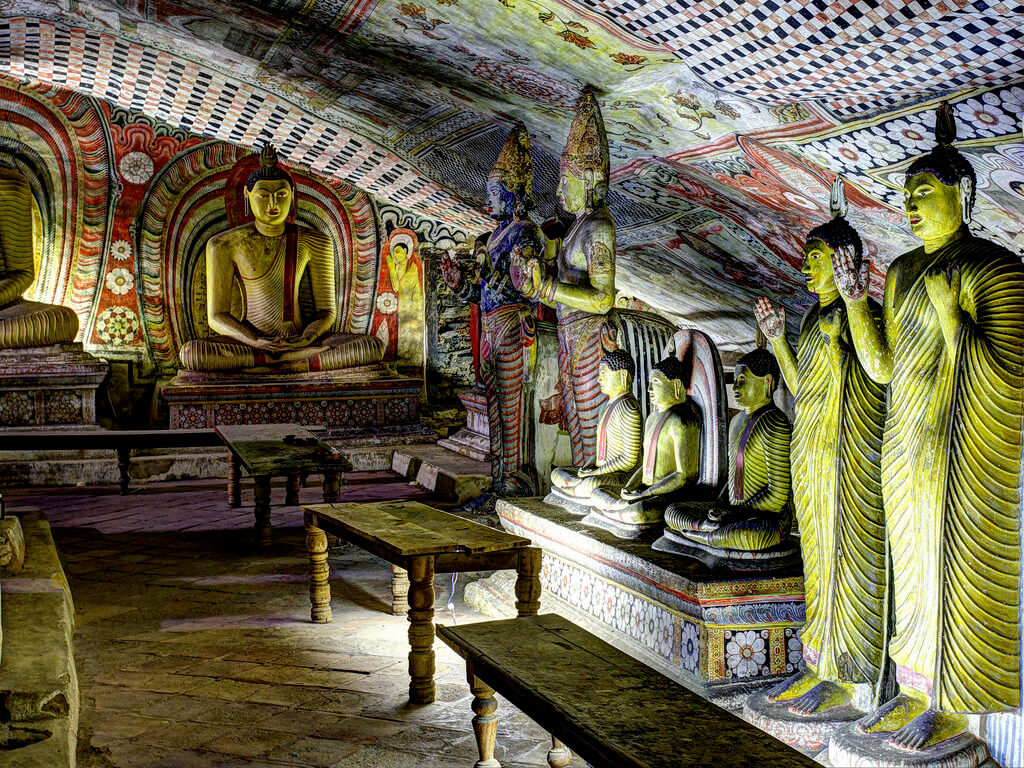 All the walls and vaults of the cave are painted with scenes from the life of the Buddha, and bright, mostly yellow colors were used for that.

Only in Maha Raja Vihariya you can observe a real natural miracle: water gathers and flows along the walls, not reacting to any laws of nature. Surprisingly, it tends up the walls, and then drips into a bowl of gold – it is around this bowl are the figures of Buddha in a state of deepest meditation!

Scholars who study the history of religion, this cave in Sri Lanka is also very interesting. After all, in the room can be seen sculptures of Buddha and the figures of ancient deities, worshipped by people before the origin of Buddhism. 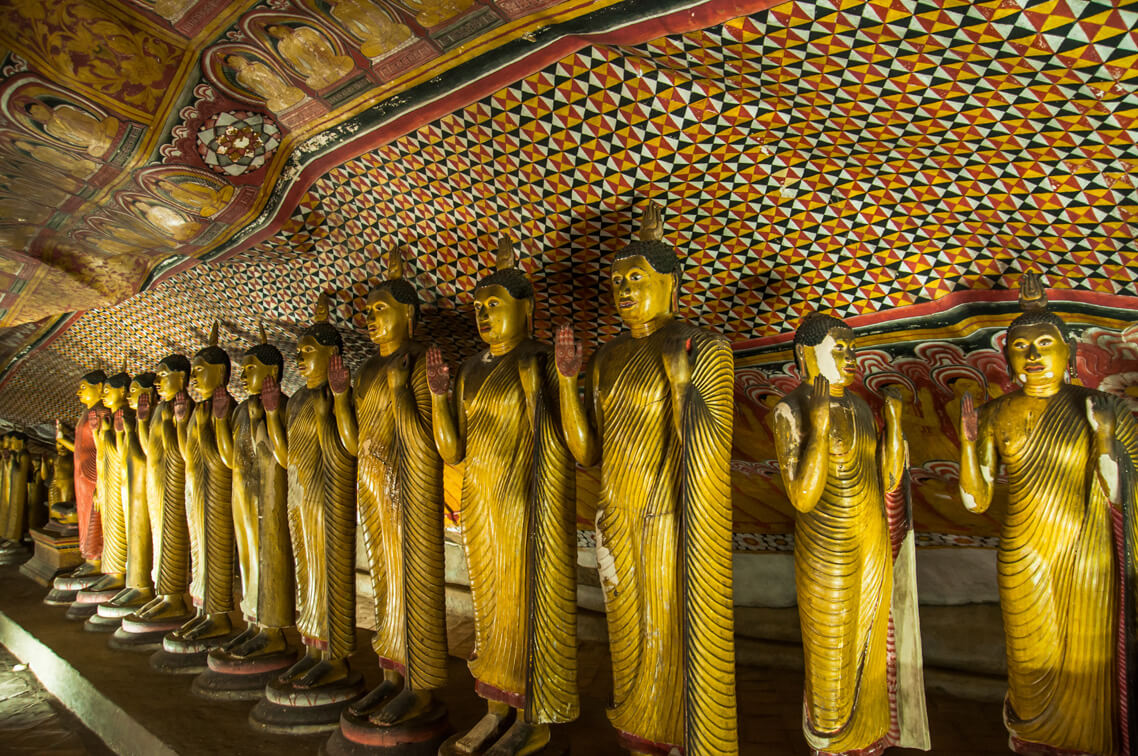 This cave was made into a sanctuary in the 18th century when Kirti Sri Rajasinha, the last king of Kandy, ruled. At the entrance of the cave is a statue of this king, the last ruler to contribute substantial sums to the maintenance of the Cave Temple. 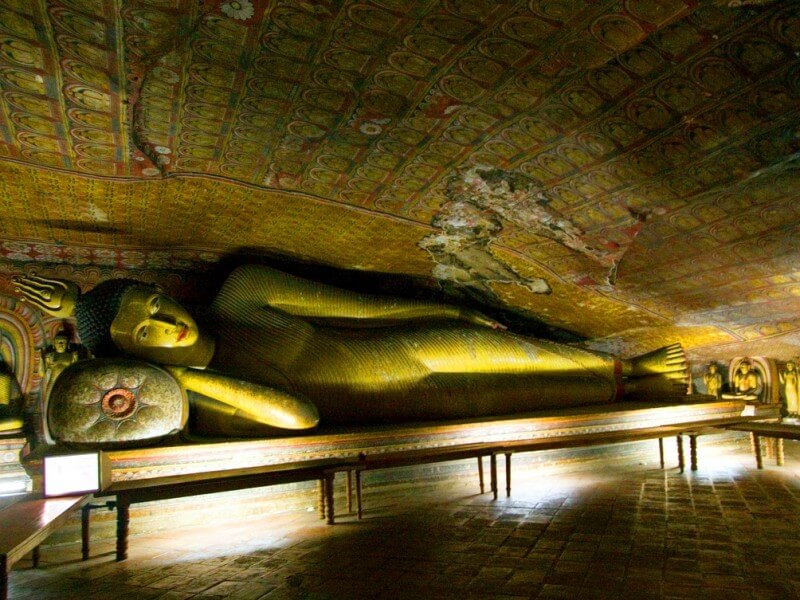 All the vaults of the sanctuary (length 27.5 m, width 25 m, height 11 m) are covered with bright frescoes – there are about 1000 images of Buddha looking down on the visitors. There are also a lot of sculptural images of Buddha standing and sitting in the lotus position – 55 pieces. And in the very center is a huge 9-meter statue of Buddha sleeping on a couch – it is very similar to the statue from the cave of Deva Raja Vihariya. With so many Buddhas painted in bright yellow, one gets a strange feeling of being transported to some other reality. 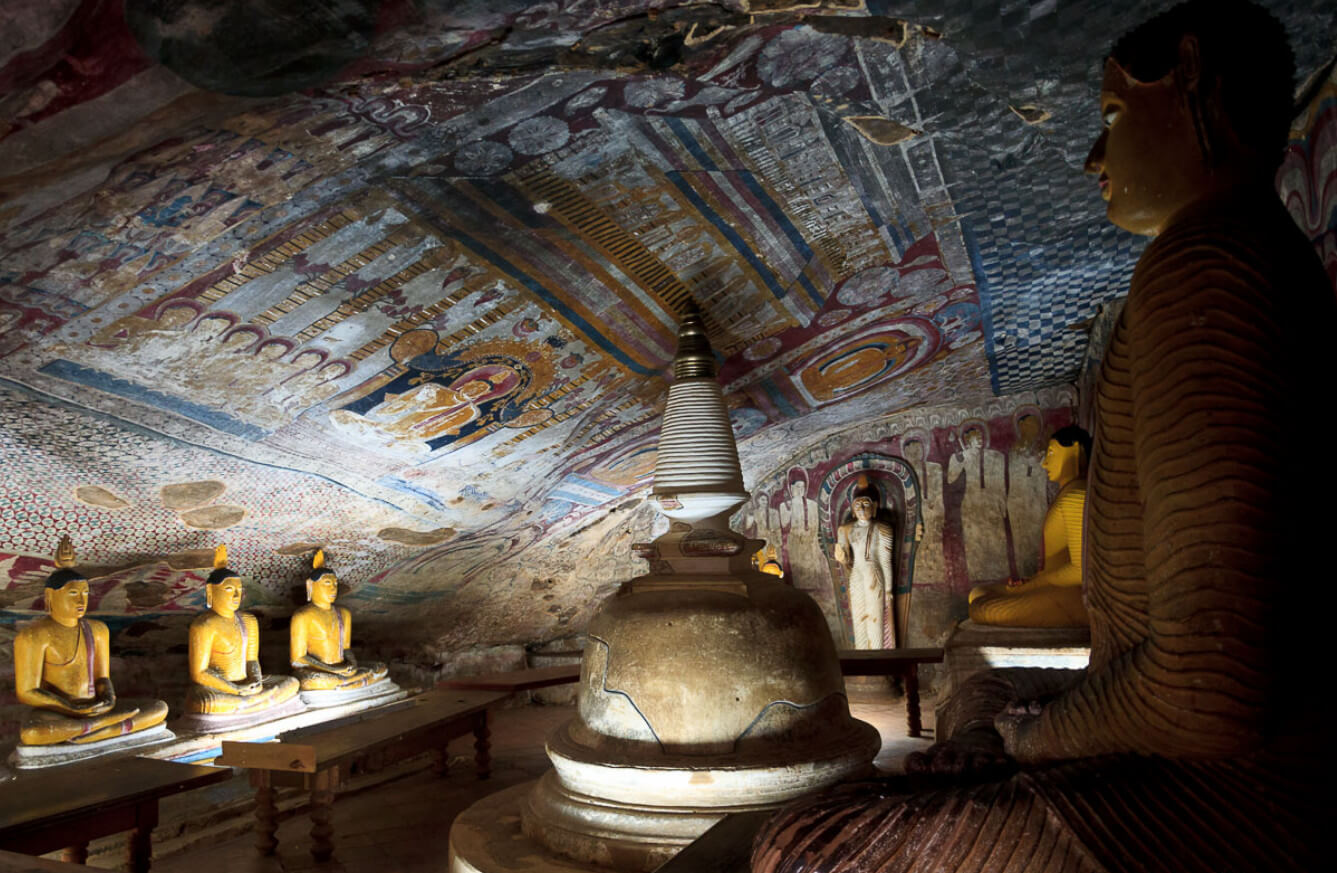 The Pachchima Viharaya Cave of the Dambulla Temple in Sri Lanka is the most modest in comparison. It is 16.5 m long and 8 m wide, and the vault, which descends sharply in the depth of the cave, reaches a height of 8 m.

In this sanctuary are ten sculptures of Buddha. The main figure, depicting Buddha in a pose of meditation and decorated with a dragon, is carved out of the same rock that makes up the cave. All the other statues are arranged in a row on either side of the main image.

In the center of the cave is the stupa of Soma Chaitiya, which was once used as a safe for saving jewels. 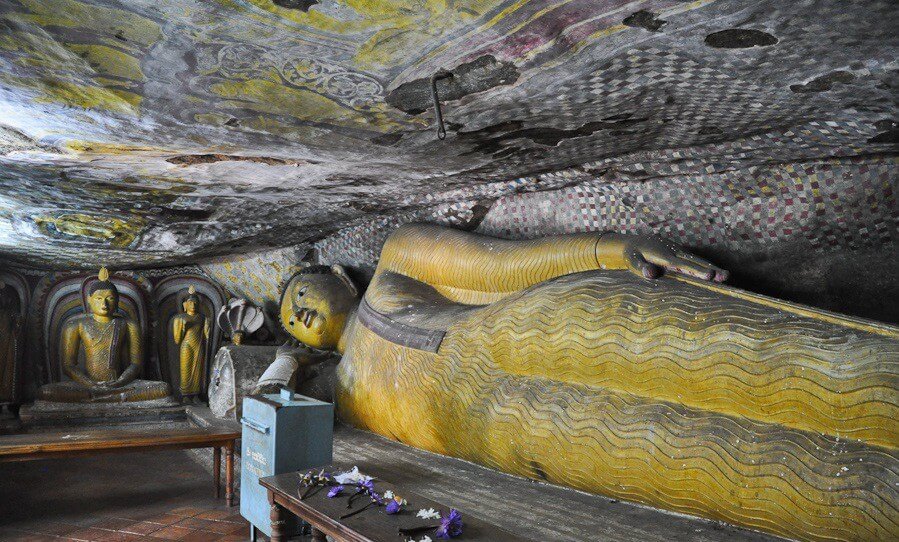 Until 1915 in Sri Lanka, this cave was used as a warehouse, but after restoration it was returned to its sacred purpose. There are 11 statues of Buddha and other figures in this brightest, most colorful temple.

READ
15 things to see in the province of Flemish Brabant, Belgium

What is important for the tourist to know

How to get to the temple complex

The town of Dambulla is located at the intersection of the island’s main roadways, making it possible to visit the Cave Temple during any trip to Sri Lanka. You can get to this town by bus, cab, or by renting a car.

Dambulla is connected by bus to Colombo and to all the cities of the Cultural Triangle of Sri Lanka (Kandy, Sigiriya, Anuradhapura, Polonnaruwa). It is not necessary to buy a ticket in advance, as buses run frequently – but only during the day, there are no flights at night. The town station, where the buses come and go, is near the Dambulla Cave Temple: 20 minutes on foot, but you can take a tuk-tuk for 100 rupees. There is transport passing by the temple, so you can get off right there.

So, how to get to the Golden and Cave Temple in Dambulla.

By car, take the A1 Colombo – Kandy to Varakapola and then change to the A6 Ambepussa – Trincomalee and follow it to Dambulla. To get to the cave temple in the town, take the A9 Kandi-Jaffna highway and drive 2 km on it. The total length of the road is 160 km, the travel time is about 4 hours.

Buses from Colombo to Dambulla depart from Pettah Central Bus Station. There are buses going to Trincomalee, Jaffna and Anuradhapura, and you should choose the bus with the number beginning with 15. But before boarding you need to check whether the transport passes through Dambulla.

The trip takes 5 hours. Tickets for some buses can be booked online at www.busbooking.lk, here you can also see the schedule and ticket prices.

Another option is to go to Kandy and from there to Dambulla. For more information on how to get to Kandy and what you can see there, see this article.

The trip by car takes about 2 hours. Follow the A9 Kandy – Jaffna highway 75 km to the north and drive directly to the Golden Temple which is on the left side of the road. 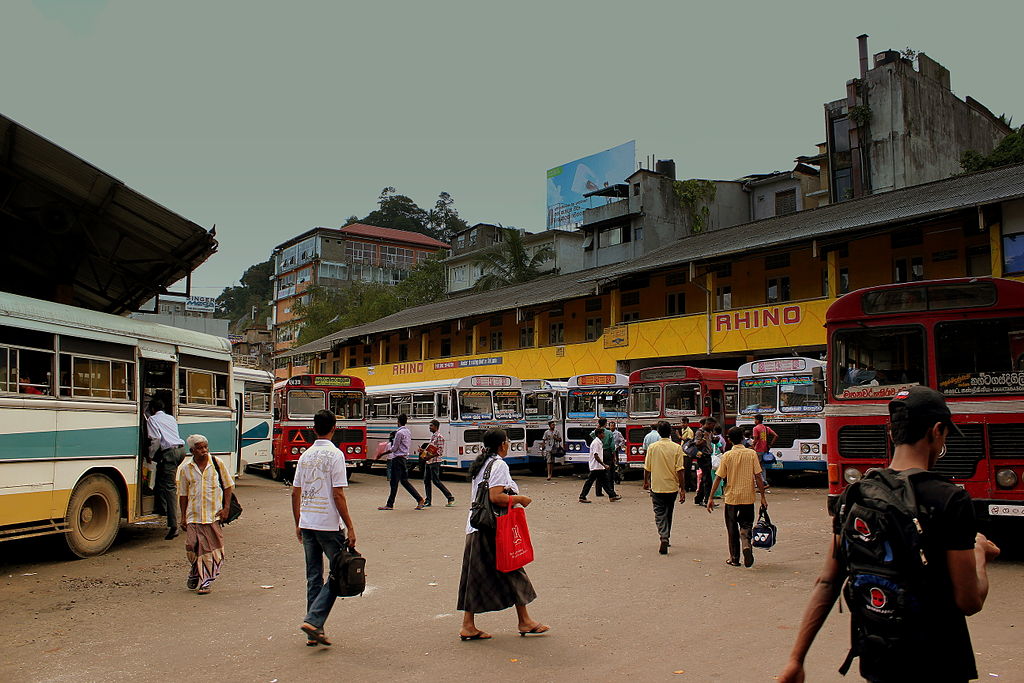 A bus ride is the cheapest way to get to the temples of Dambulla – it costs 70 rupees (0.5 $). You can take any flight that goes to Jaffna, Dambulla, Trincomalee, Habarana, Anuradhapura.

Another way to get from Kandy to Dambulla is to make a deal with a local tuk-tuk driver. It takes an average of 2 hours and costs from 3,500 rupees ($18.5) or more.

Travelling from the southwestern and southern part of the island of Sri Lanka will be more difficult, and it makes sense to think about sightseeing a few sights. The fastest way to get to Dambulla would be via Colombo. Since the eastern part of Sri Lanka does not have a well-developed road network, in addition the roads go through the mountains, the road will take a long time.

By car you take the E01 which becomes the E02 to Colombo and then change to the A1 and drive as described under “From Colombo”. The trip to Colombo will last approximately 1 hour. Note that the E01 and E02 expressways have a charge of 750 rupees ($4).

The best way to get to Dambulla Temple is to take the express train to Maharagama (a suburb of Colombo). The trip costs $3.50 and takes 1.5 hours. After that you should take bus 138 to Colombo Central Bus Station – the ticket price is $0.25 and travel time is about half an hour. Read the recommendations from “From Colombo” for how to go further.

Features of visiting the temple, what it looks like inside and interesting facts about it – in this video.

Updated: 9 Apr, 2020 Ambalangoda (Sri Lanka) is a small village in the western…

Updated: 14 Apr, 2020 The town of Tangalle (Sri Lanka) is located on the south coast in the province of…

Updated: 31 Mar, 2021 The Historic Town of Galle (Sri Lanka) is located on the South Coast of…