17 the most beautiful small towns in Spain

Charming corners? Small towns that are frozen in time? There are more than 8,000 municipalities in Spain, and many are so beautiful that it is impossible to list them all. But there are some that stand out so much that it was impossible to resist, and not show you this list of some of the most beautiful small towns in Spain, one from each region.

Whether you like the sea, the mountains or history, here you will find Spanish cities for all preferences. Different, varied and with elements that make them unique in many ways, but also have something in common: they are so beautiful that they will be remembered forever. 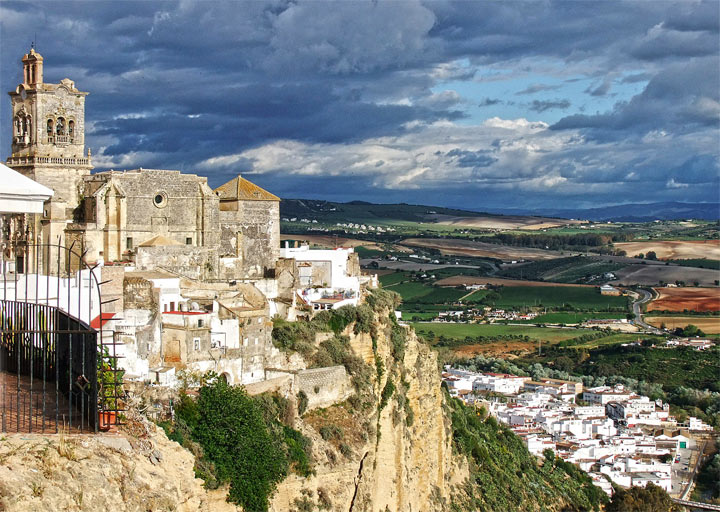 This beautiful little town in Spain is the jewel of the province of Cadiz. Arcos de la Frontera stands out for its white houses on a hill and its beautiful views of the Guadalete Gorge and the surrounding mountains. But beautiful views are not the only advantage of the city. The tranquility that its cobblestone streets breathe, the light reflecting on the white walls and vaults on all sides – it’s all mesmerizing. It’s an authentic Andalusian town and the perfect place to just spend a weekend. 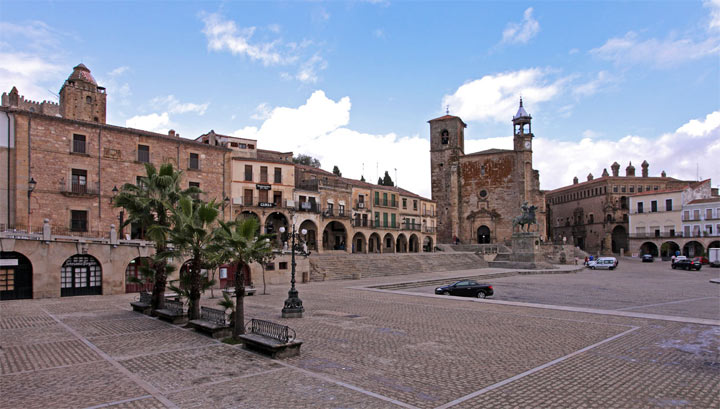 Birthplace of conquistador Francisco Pizarro, Trujillo is more than the owner of one of the most beautiful squares in the world. This Spanish city is one of the most monumental in Extremadura, where history oozes from every stone. Dominated by the Arab fortress, the surrounding walls and the labyrinth of narrow stone streets make Trujillo an ideal place to spend a summer evening. Surrounded by palaces, towers, and the heritage of those who made their fortunes in America, you can feel like you’re in the sixteenth century. 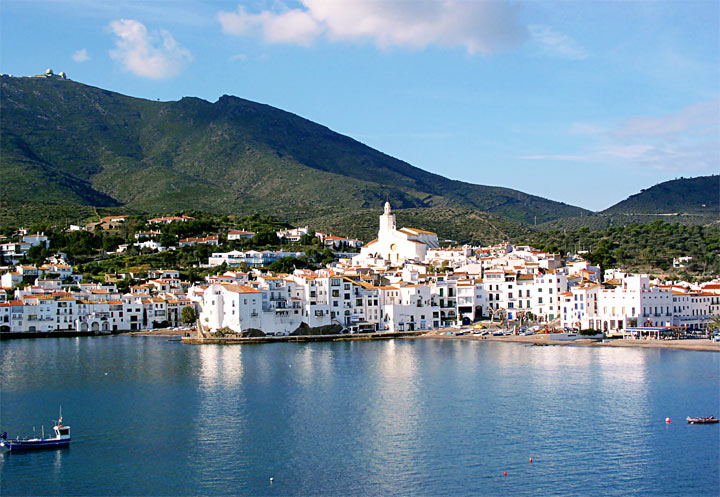 The way to Cadaqués is along a winding road that winds through the incredible scenery of the Cape Creus. When the sun shines on this city that overlooks the sea, it’s a gleaming jewel that has inspired artists for centuries. Yes, it’s Dali’s town, but it’s also one of the most charming fishing villages in all of Spanish territory. The whitewashed houses, the church towering over the roofs, the small boats of fishermen make Cadaqués a work of art and one of the most beautiful towns in Spain that encapsulates the essence of the Mediterranean Sea. 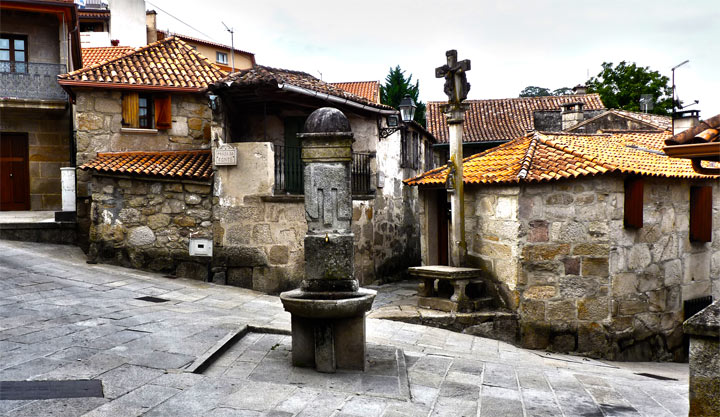 On the shores of the Atlantic, the 7 km separating the town of Combarro from Pontevedra is a journey through time. Time stood still here many years ago and maybe that is why the old town is a continuous festival of granaries and old boats testifying to life in Galicia throughout history. One word “picturesque” is impossible to describe this beautiful city of Spain, which has preserved its heritage so well. 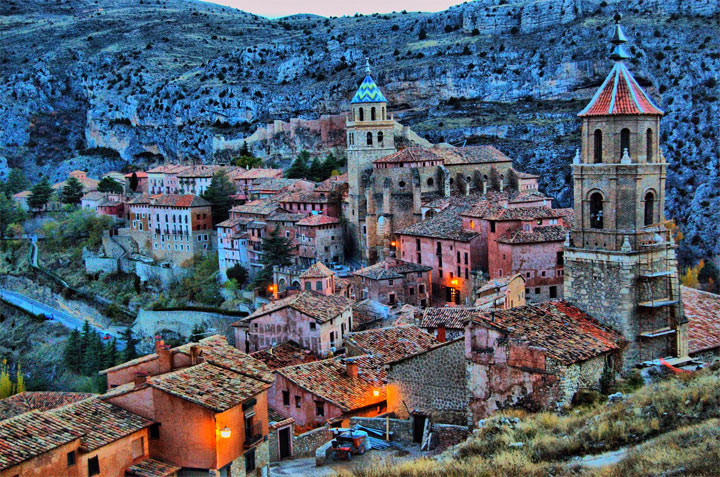 With its ochre-colored buildings and walls climbing the mountains, Albarracín is one of the most beautiful cities in Spain. Wrapped in ravines and valleys, this corner of Aragon has been inaccessible for centuries, which has affected its appearance. Cobblestone streets, beautiful views, incredible slopes and the fabulous Santa Maria de Albarracín church are some of the highlights of visiting the city. 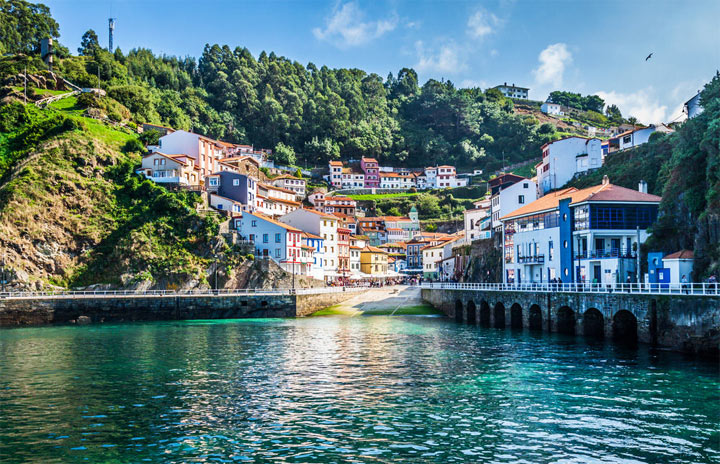 The houses of Cudillero are very colorful, and located like the steps of an amphitheater between the mountains and the Cantabrian Sea. This fishing village of Asturias has one of the most interesting ports of the region…as well as some of the best scenery! Going up and down the steep slopes of the village, you can watch the blue sea and sky merge with the green landscape and rooftops of the houses. 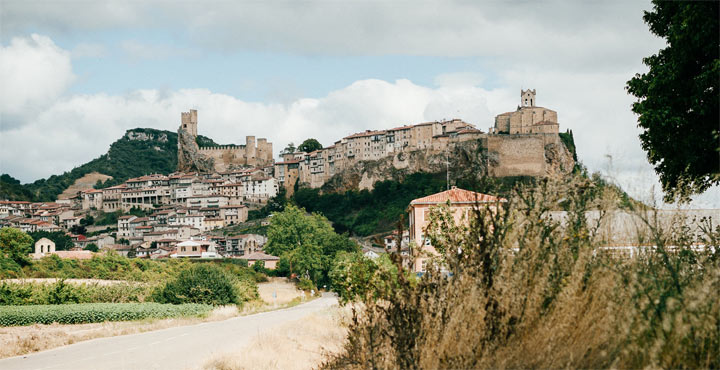 The village of Frias in the province of Burgos is a postcard image! This impressive medieval Spanish town is located in the valley of the Ebro River and perhaps its most distinctive feature is the eleventh-century castle of the Dukes of Frias, perched on a hill and surrounded by a moat. Its tower is the best vantage point to view the surroundings, the charming walls and the “hanging” houses are mesmerizing. In summer you can swim in the river here, enjoying the view of this one of the most beautiful small towns in Spain.

READ
Kenya is the most developed country in equatorial Africa 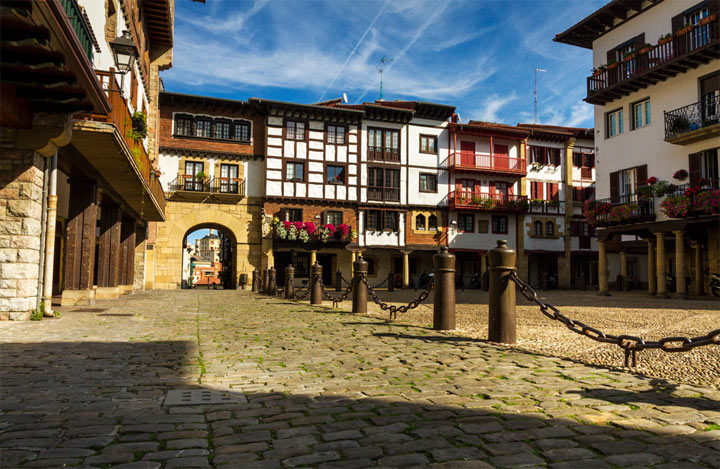 In the bay of the sea, on the banks of the Bidasoa River is Ondarribia, an architectural gem that will thrill any photographer. This old town is dotted with seemingly timeless, majestic houses with wrought iron balconies and carved eaves. The Castle of Carlos V is the beating heart of this fishing town, which also offers the best tapas in the region. 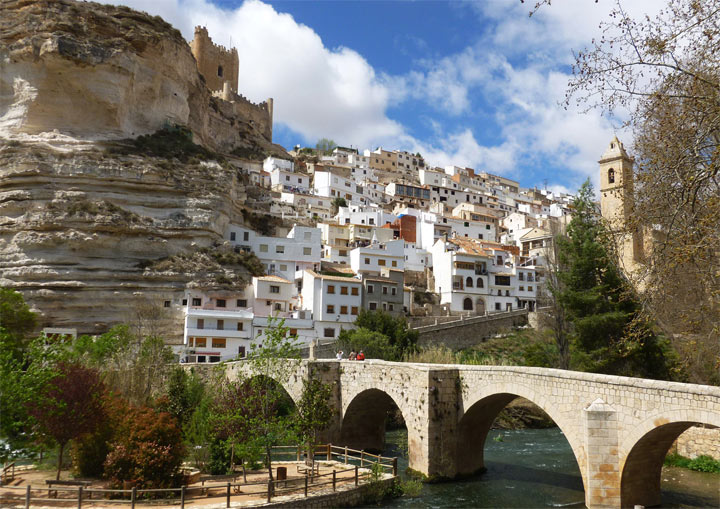 Alcalá del Júcar is a town that seems to have appeared out of a fairy tale. Its houses have been adjusted over the years in the shape of the side of the mountain, which is crowned by a Moorish castle with indescribable views. Here you can walk through the cobblestone streets and cross the Roman bridge that crosses the river Júcar. This historic site also has a network of caves and is ideal for extreme sports. Where else would such a small place have so much to offer? 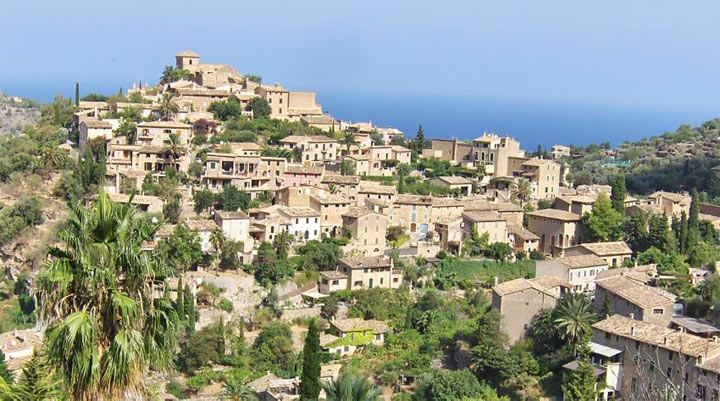 Although the entire Sierra de Tramuntana in Mallorca is a paradise, the village of Deija will win over anyone who visits it. The village is nestled in a beautiful setting of green cliffs, olive trees, oaks and pines, all near the blue Mediterranean Sea. Deia has shades of refuge and here time seems to pass more slowly. Here there is nothing better than climbing the steep streets to the cemetery and enjoying the scenery of this beautiful city of Spain with its stone houses and flowers. 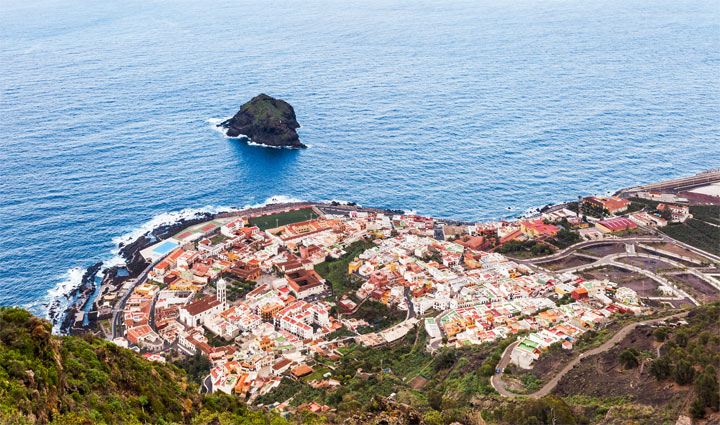 Garachico is a tiny and colorful town on the Spanish island of Tenerife. It is a beautiful place forged by nature and history that still pervades the atmosphere. The volcanic eruption that destroyed the port in 1706 took away some of the wealth, but in turn has helped the town survive so well. It is a pleasure to walk its streets and even better to swim in the pools created by the volcanic lava in its path.

READ
Faroe Islands: a secluded spot in the Atlantic Ocean 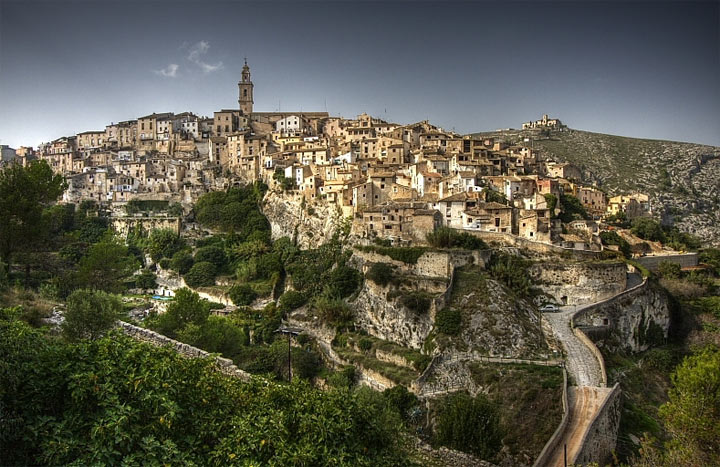 This Spanish city, Muslim in origin, is characterized by its stone houses, cobblestone streets, breathtaking views of the Sierra de Mariola Nature Reserve, and special atmosphere. The city center is full of springs that are hidden in the niches of the urban labyrinth. If you like to walk, don’t leave town without climbing the Chapel of St. Christ on top of Mt. 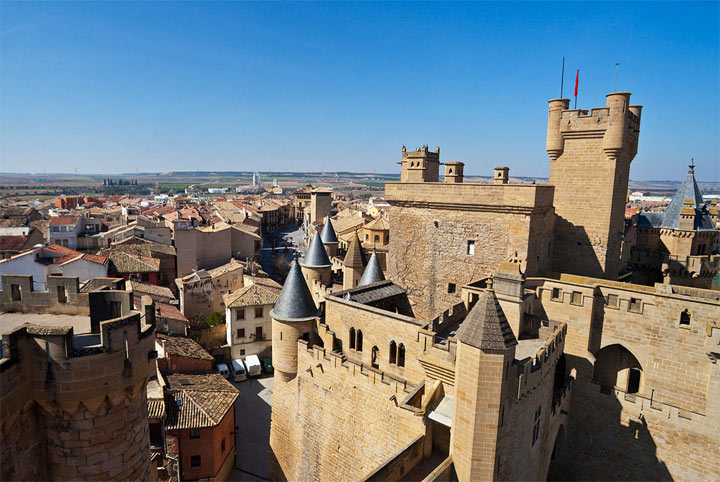 This beautiful building with its battlements and turrets is the Royal Palace in Olite, a masterpiece built during the reign of Carlos III and probably one of the most beautiful castles in the world. Not only the castle, but the whole town will fascinate every history buff. 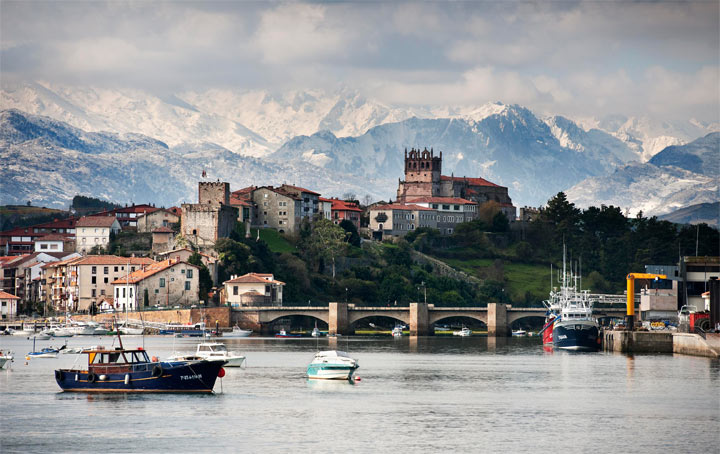 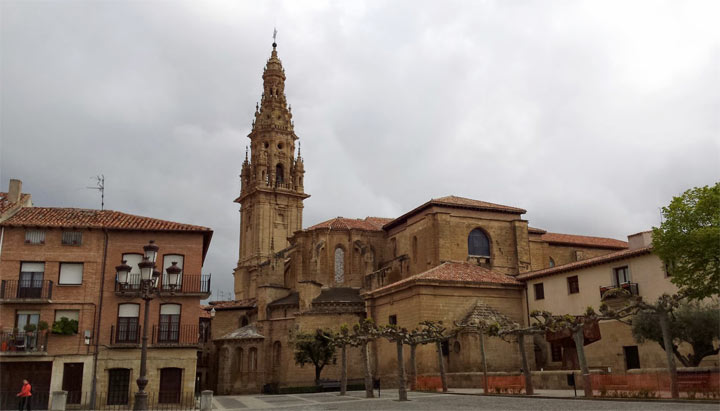 Santo Domingo de la Calzada is a beautiful town where you can eat great food and spend a few days in the maze of its medieval streets. Its old part hides true ancient treasures, like the reliable walls, the beautiful cathedral of the same name or the old hospital. Not to mention the beautiful fourteenth-century square. 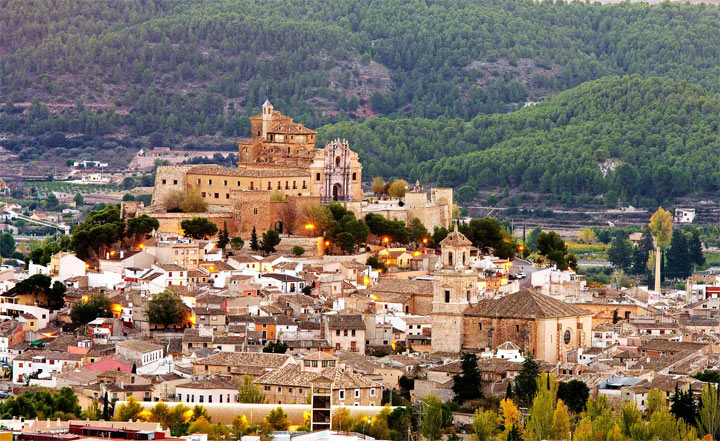 Caravaca de la Cruz is an amazing place for lovers of Renaissance and Baroque architecture and art. The Baroque basilica, which sits atop the city under the protection of a beautiful palace, stands out here in particular. The scenery, beautiful streets and locals make Caravaca de la Cruz one of the most beautiful small towns in Spain.

In the center of Spain, the small autonomous community of Madrid hides such gems as Chinchón. The main attraction of the city is its square, known for its Baroque buildings and history, which can still be felt. Formerly a theater and bullfighting arena, today it is an ideal place to relax in one of the bars. The Augustinian Monastery, the Church of the Assumption and the Clock Tower are some of the fascinating corners of Chinchon.

There are many more beautiful cities in Spain. We recommend traveling through this country and discovering all its beauties.