La Vallee Blanche translates from French as White Valley and is the longest ski run in Western Europe. This route is conveniently situated in Chamonix, the capital of the Alps, and will take you from the panorama of the Mont Blanc massif to the valley floor. If you are an experienced skier and are looking for something more challenging, the White Valley should be on your wish list.

However, you need to do a few preparations first. Start with a day or two of off-piste instruction to get used to the wilderness behind the resort’s carefully groomed trails. As with off-road tires, you’ll need special skis to get the job done. Off-piste skis are wider than their conventional counterparts, so you can float dreamily in fresh snow. Few things can compare to picking the first line of mornings across endless expanses of snowy virgin terrain.

Being Chamonix, you should have no problem finding a guide or even a group to help you make your first descents. Knowing the local trails is also invaluable to avoid the agony of finishing. Hiking in stiff boots with a pair of skis bobbing awkwardly on your back is not my ideal end of the day.

Also, if you’re aiming for La Valle Blanche, you’ll inevitably have to carry some equipment with you. The route leaves the mouth of an ice tunnel drilled on top of the Aiguille du Midi. To get to this dangerous place, use the two cable cars to the observation deck at 3,840 meters. In the summer months, the cars are filled with tourists eager to take a few photos of Mont Blanc and then quickly return to a warm hotel. In winter, the first elevators of the day are filled with brightly lacquered skis, ringing cats and flashing LEDs of avalanche transceivers. 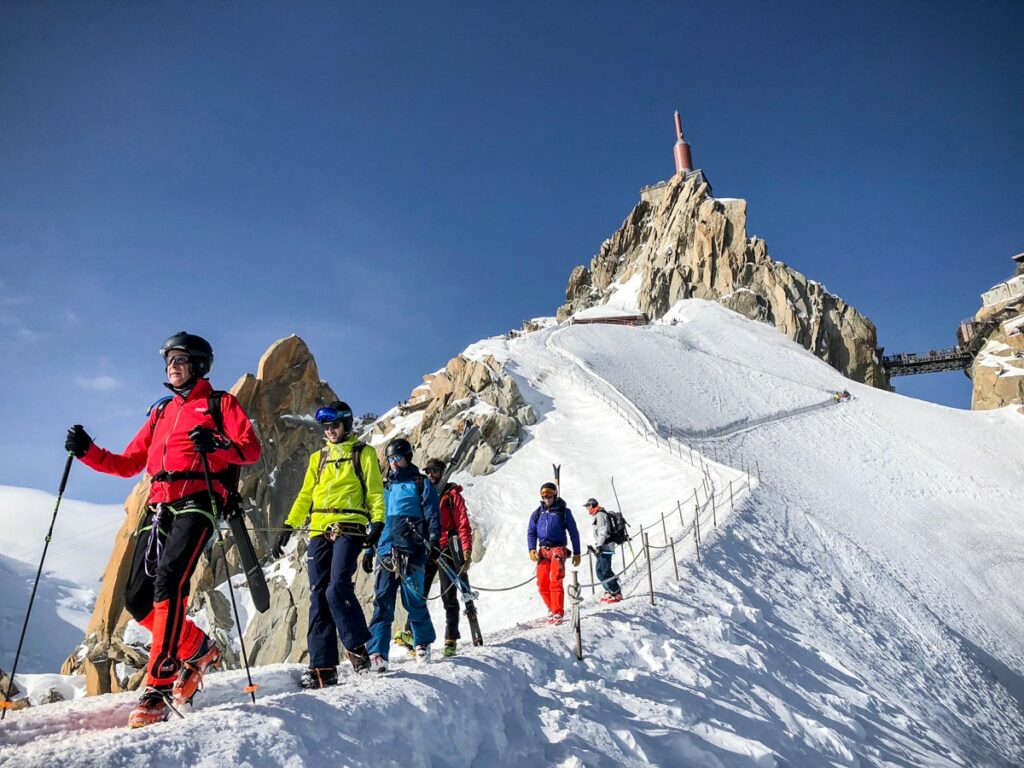 READ
Chile: hard facts about this amazing and distant country

On top of the world.

Before you reach the avalanche zone, you have to descend the ridge of the tip with skis strapped to your back. Crampons are worn over the ski boots to provide symbolic grip on the steep slope. By now, the rope has been laid on the steepest section, but this in no way guarantees that it will spare you an impromptu introduction to cryogenics. To compensate, the view of Mont Blanc and the surrounding peaks is simply breathtaking.

After you get over the ridge, there is a flat section where it’s time to swap cats for skis. The first slope is one of the most vertical on the entire route and is prone to freeze-thaw in sections of wicked black ice. It’s a tricky introductory gambit, but from there you can enjoy hundreds of feet of blissful white powder. Gradually, the mountains you were looking at rise to meet you, and the wind subsides, giving the air a cathedral-like stillness.

Downhill skiing may offer invigorating speed, but it can’t compare to the true adventure of drawing fresh trails. For almost all of human history, these snow-capped peaks have been out of reach of even the most resilient warrior. Now, thanks to 21st-century equipment, they are available to mere mortals with only a few weeks of skiing under their belt. Nevertheless, the high places of the world retain an aura of grandeur, alienated from the ephemeral bustle of life below.

On top of the world

Watch the weather for cracks. If your guide tells you to watch his trail closely, we urge you to heed the advice.

At the bottom of the valley, the route becomes quite gentle, and you can assume a twisting position to avoid a dead end. Snowboarders are strongly advised to bring a pole with them so they can ride this section. Then it’s time to unclip and make the short but steep ascent to the ridge crest. At the top, you’ll be greeted with chilled refreshments at the charming old Refuge du Requin . 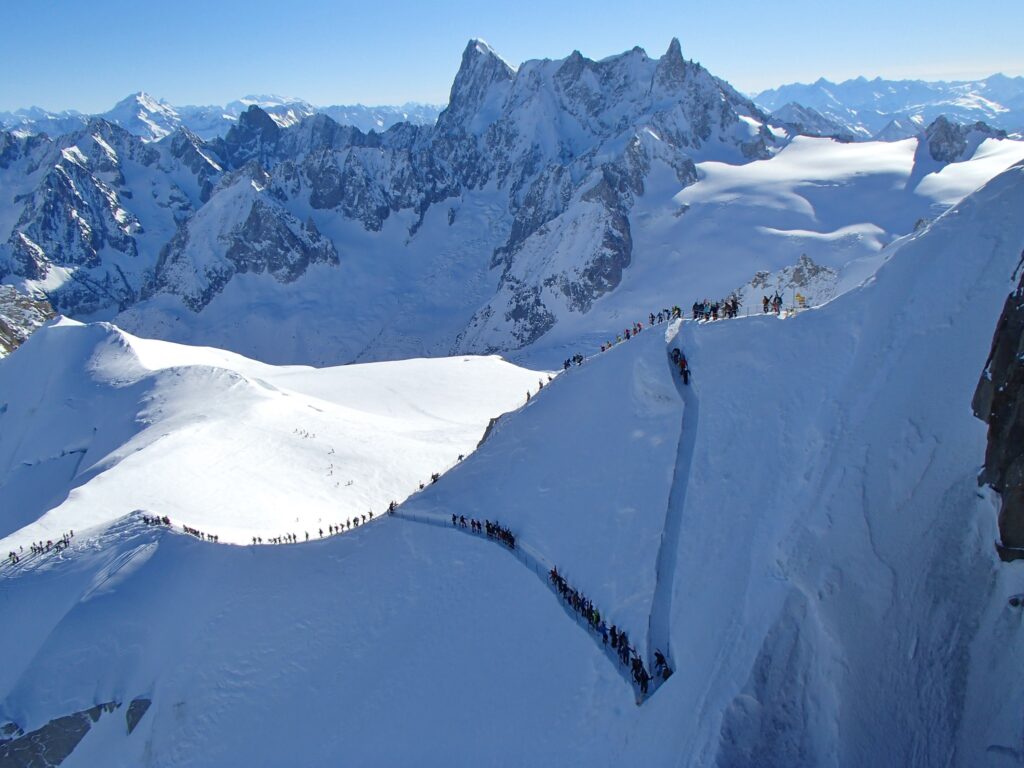 OLYMPUS DIGITAL CAMERA A game of dice with danger

It can be tempting to settle down from here. Sure, the cracks and avalanches are behind us, but it’s best not to lose concentration. The descent toward Chamonix winds through the pine forest, forming a series of half-pipes connected by studs. There are also a few traverses where it’s easy to let your guard down, so be very careful.

Finally, the route breaks out from behind the trees and emerges onto the short, winding road into Chamonix. With shallow snow, you can ski right up the road into town. The warmth and bustle of the après-bars is a world away from the windswept summit of the Aiguille du Midi . It’s hard to believe you were there just a few hours ago, looking up at the dizzying spire at several thousand feet. Order yourself a light beer and kick off your heavy boots by the fireplace. After all, you’ve just completed the longest ski downhill in the Alps. You’ve earned it.

Popular ski resorts near Mont Blanc are Chamonix and Courmayeur A winter vacation in France is an opportunity to combine excursions to historical sites with skiing. Choosing a place for the latter is difficult. To do this you need to study each ski resort Mont Blanc, which operate from December to March. Popular with Russian tourists – Chamonix and Courmayeur

The Chamonix ski area consists of five different sets of slopes. Two of which are linked together with the rest, separated by the length of the valley. Because the Chamonix valley is low and the elevators rise to more than 3,000 meters, there are many skiing opportunities at 2,000 meters or more.

The ski terrain in this Mont Blanc ski resort ranges in altitude from 950 m to 3,300 m, while the backcountry skiing offers descents from higher altitudes, they have increased difficulty.

There are about 150 km of pistes accessed by 65 ski elevators, divided between the main ski areas and the low-mountain areas. Chamonix has 6 green runs, 30 blue runs, 31 red runs, 10 black runs and two snow runs. They are spread across five mid-level ski areas.

Many gentle slopes can be found here along the Chamonix Valley with easy access for beginners. These areas are suitable for beginners or those who want to get their skills back before heading to a higher mountain.

They are suitable for beginners and professionals. Each ski resort Mont Blanc has a rental equipment. The cost – from 20 Euros per day.

The average height of the mountain

These areas are accessible through the elevator system and offer a much larger range of trails of all difficulties – from the confident beginner to the experienced skier and snowboarder. If you want to ski more than one day, you can take one of the regular bus or train tickets, the price of which is included in the package. With Mont Blanc Unlimited , you not only ski in the Chamonix valley but also in neighboring ski areas such as Courmayeur in Italy, Weissing Mont Blanc and Verbier.

The Italian ski area of Courmayeur offers a very different skiing experience to Chamonix, despite being only 22 km away. It has simple pistes and inexpensive mountain restaurants. The weather here can also be mild, with many sunny days.

READ
San Marino: what there is to see in Europe's oldest country

The main ski area has 31 trails – challenging and easy. With plenty of snow cannons serving the slopes, skiing is guaranteed from December to mid-April. A system of elevators is in operation – one at 1224 m, and most of the ski areas are above 2000 m. Access to Courmayeur from Chamonix through the Mont Blanc tunnel, or by car, by regular buses that operate in winter and summer. There is a discount on the tunnel and bus ticket if you have a Mont Blanc Unlimited ski pass.

Courmayeur makes a great day trip from Chamonix for the early intermediate skier or the rapidly progressing beginner at the end of their first week of skiing. Plenty of blue pistes combined with plenty of cafes. For the beginner, there are few options.

The beginner areas are at the foot of the mountain near the small village of Dolonne and on the hill by the Maison Vielle shelter and restaurant. The Dolonne area is very similar to Vielle Vieny, with the difference being that it is at the bottom of the hill, so the snow conditions are not always as good, but the weather, a little milder. There is a small Tzaly elevator in the beginner area next to Maison Vielle, and it is a few steps away from the main slopes. Maison Vielle restaurant also has an excellent reputation among locals for the high quality Aosta food.

The challenge for professional skiers in Courmayeur is off-piste trips. The main slopes start from the Bertolini cable car elevator station. The Rocce Bianche run has the most stable angles in the resort and, being on the shaded side of the mountain, usually has good snow quality.

Next in the Mont Blanc ski resort is the Diretta piste. It is a straight line under the Zerotta chairlift and runs between the blue runs. Diretta piste is not fully equipped, a few lower layers are left uncovered, which contributes to the formation of places without snow.