The darkest place on earth: The Skeleton Coast, the graveyard of lost ships, whales and planes.

Somewhere on the southwest coast of the African continent, along the shores of the Atlantic, there is a mystical place whose mysteries and secrets have been stirring the minds of many people for centuries.

Portuguese sailors in the Middle Ages nicknamed these places as “Gates to Hell”, and the locals – Bushmen, call these places “Land created by God in anger” and “Coast, where people and ships come to die. 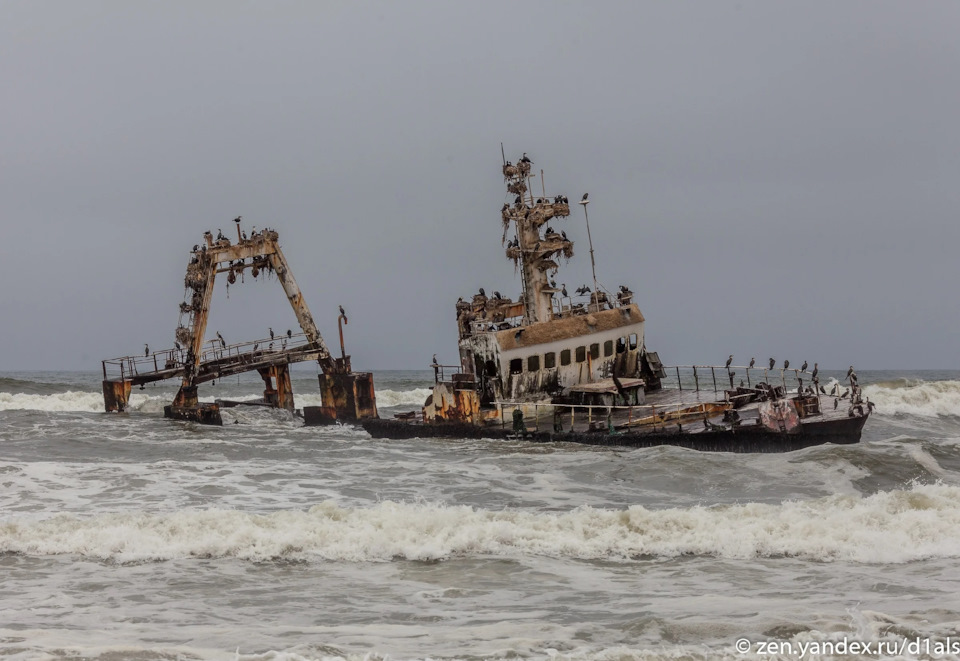 The name of this bleak place is called the Skeleton Coast. A lifeless stretch of the Namib Desert, jutting directly into the raging Atlantic Ocean.

The length of this mysterious and mysterious piece of land in Namibia is just over 1000 km and stretches from the river Swakop near Walvis Bay to the river Kuene, on the border with Angola.

It is also a place where for hundreds of years, wrecked a great many ships and their remains are still resting in the lifeless sands. 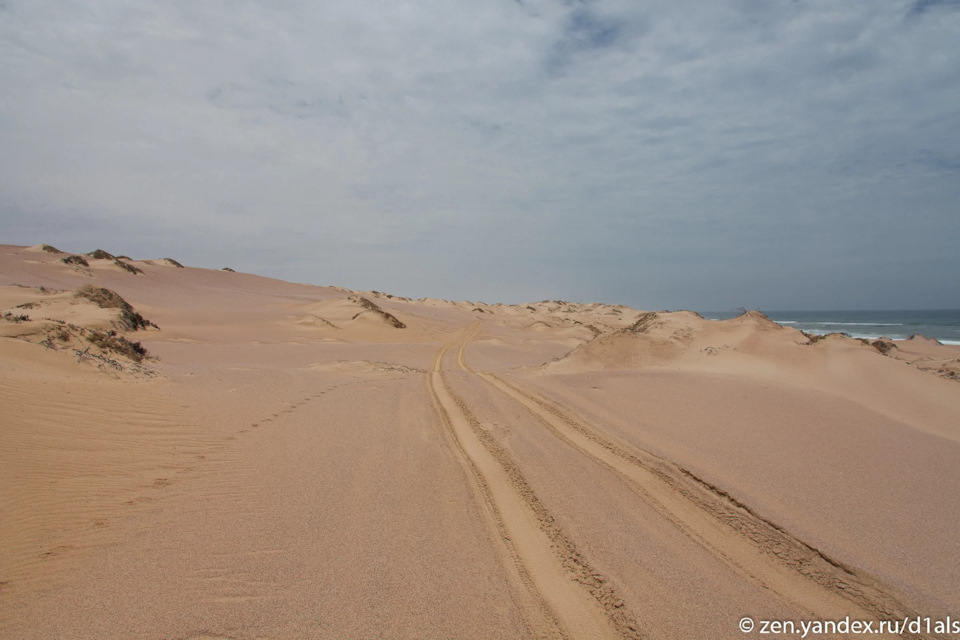 It is no exaggeration to say that it is difficult to find another similar place on the planet, so rarely visited by people and so unfriendly to all life.

But the Coast of Skeletons didn’t get its ominous name by accident. This piece of desert, which occupies a huge part of the ocean coast, is indeed strewn with numerous skeletons. 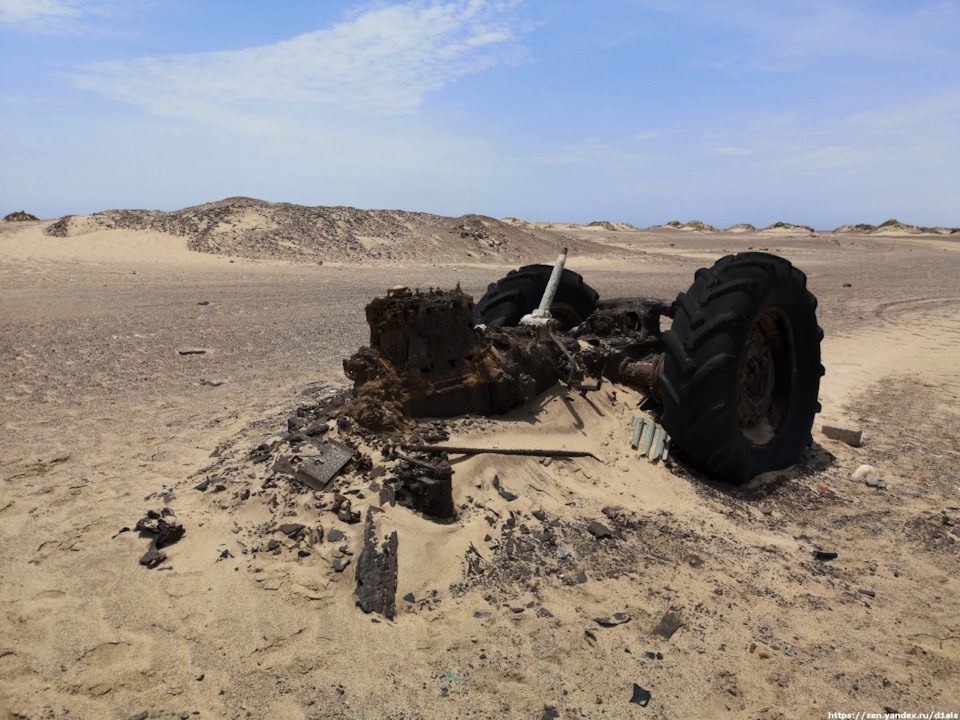 For a long time mariners had a bad reputation for this part of the ocean, attributing all sorts of mystical explanations to numerous shipwrecks. 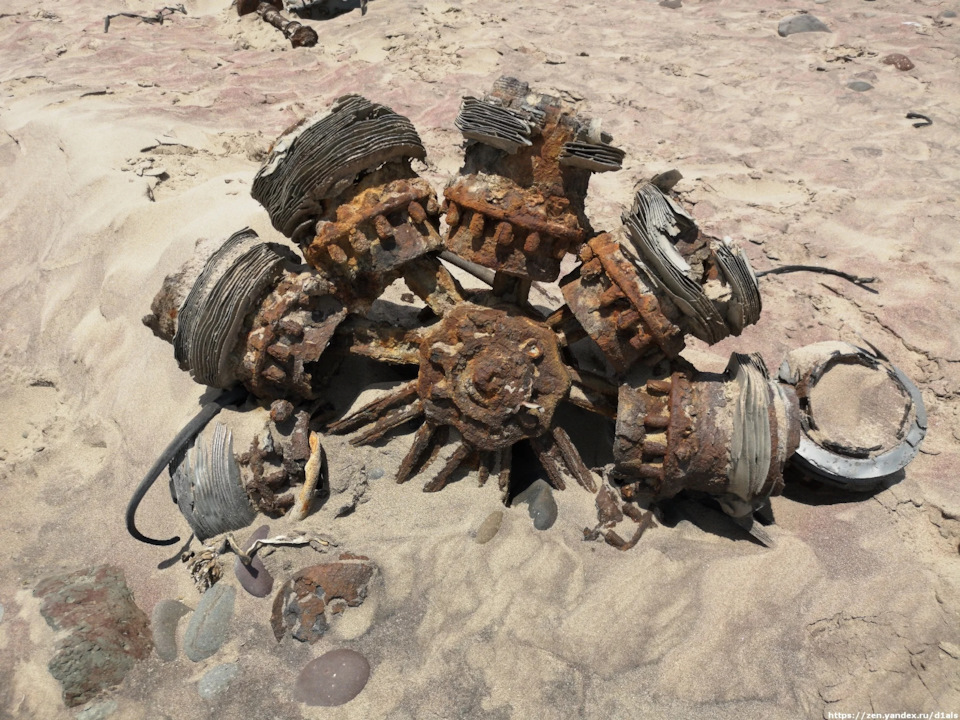 But there is no mysticism or mystery in shipwrecks.

The fact is that from the southern latitudes of the Atlantic the cold Antarctic Benguela Current comes here.

Not only do the cold waters of the current form the most powerful coastal surf, but the cooled ocean air collides here with the winds, carrying on the contrary their red-hot forty-degree air from the Namib desert toward the ocean. 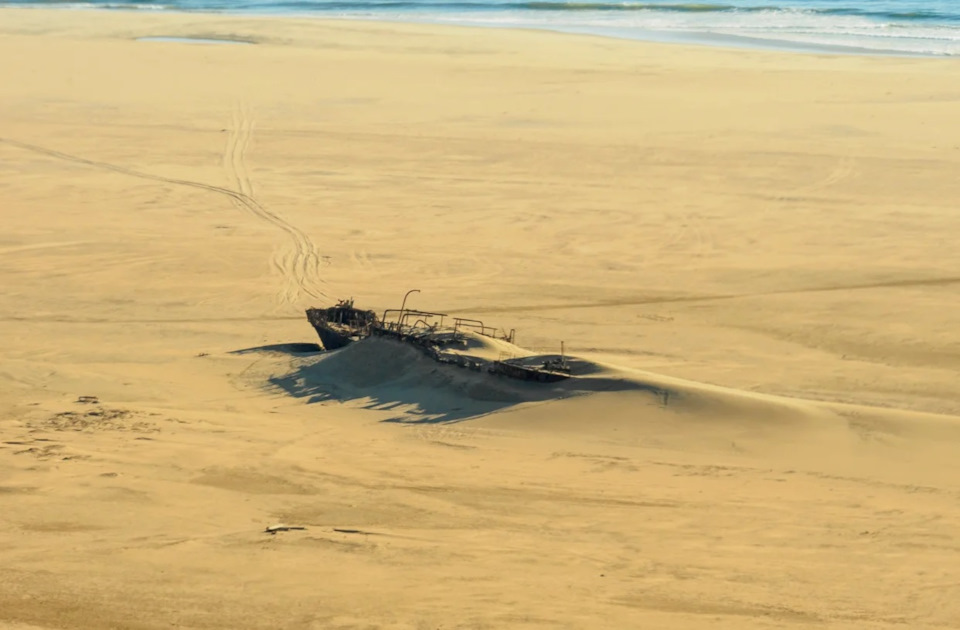 As a result of the collision of cold and hot currents, very low and dense fogs, hundreds of kilometers long, form along the coastline.

Ships in such conditions become disoriented and stranded in poor visibility, as was the case, for example, with the steamer Eduard Bohlen in 1909. 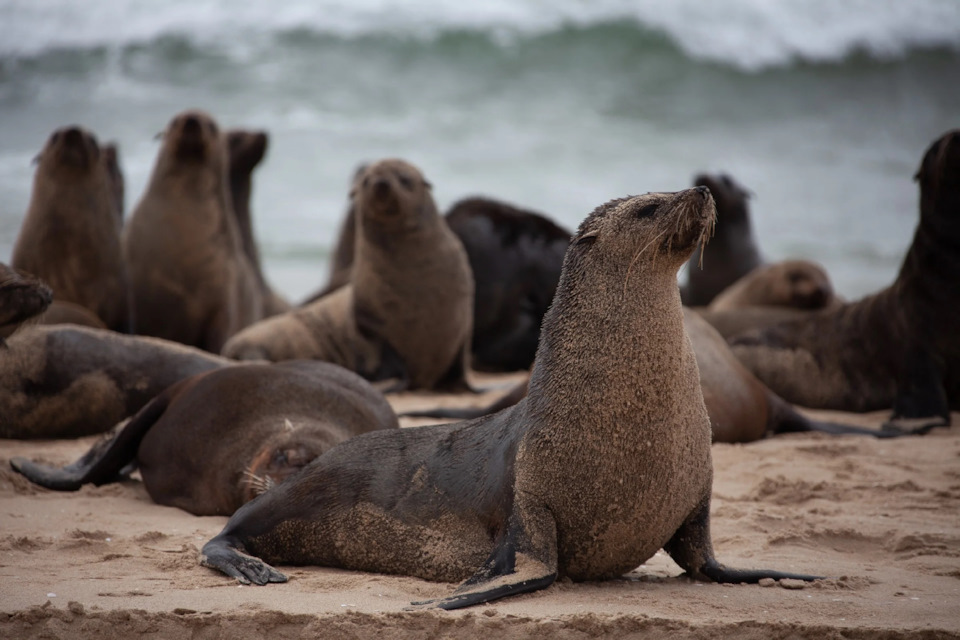 The Eduard Bohlen was beached, the engine was sucked into the sand and the ship found its last resting place in the Namib Desert, although the crew and the passengers managed to escape because the nearest village was a few dozen kilometers away. 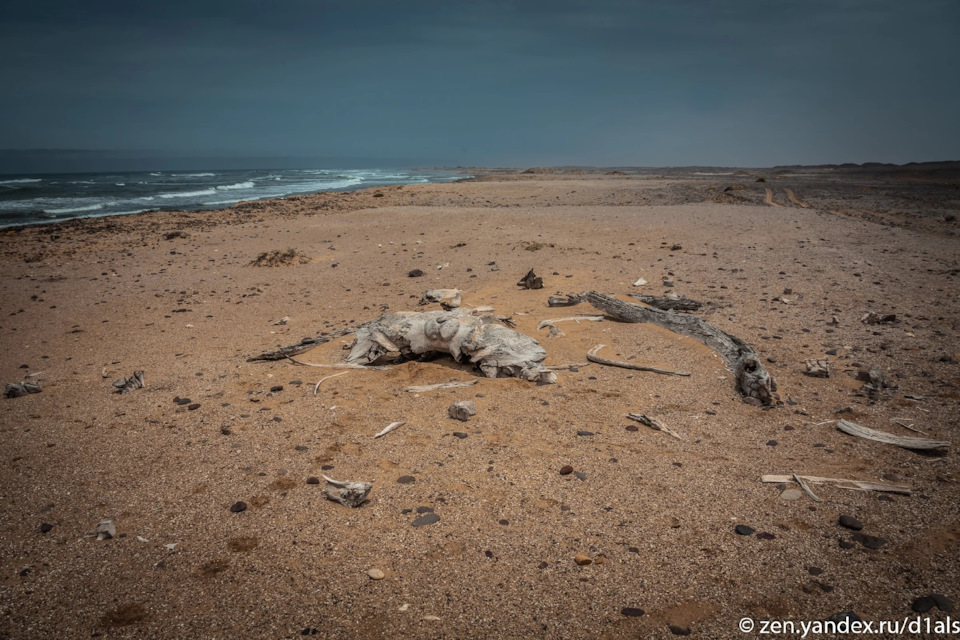 But it was hard to envy the poor survivors of the shipwreck on the Skeleton Coast. Ahead of them stretched hundreds of kilometers of lifeless desert, without water, without oases, without villages, and behind them was the boundless ocean. Many of such “lucky” people died before they could wait for help and get out of these unfriendly places.

But there were more horrible stories: people sailed on boats to the shore, abandoned a ship that ran aground, and due to the strongest surf could not get back to the ship. Such poor people also had an unenviable fate. 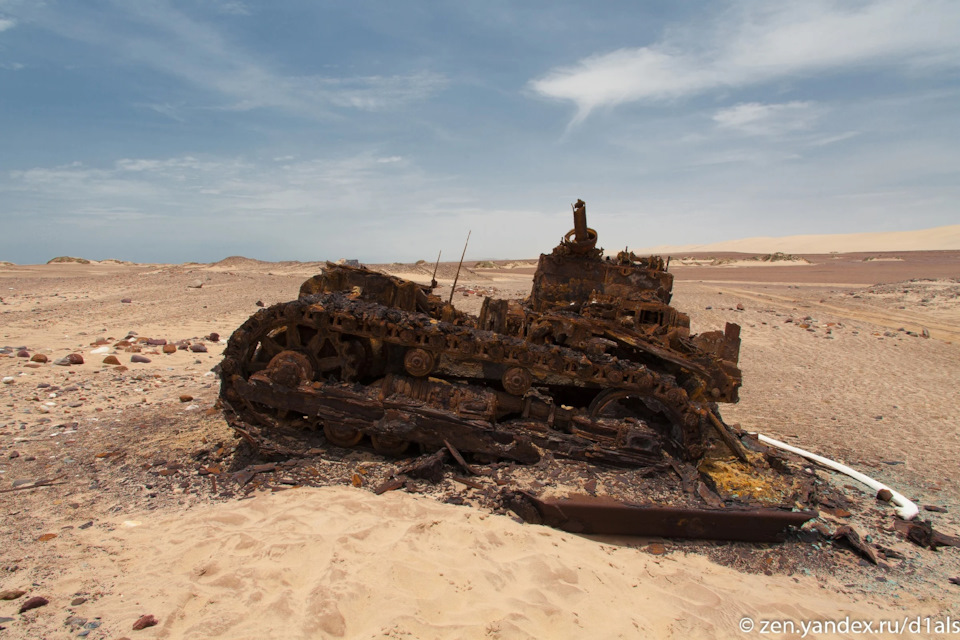 Also about these places was written the famous book by John Henry Marsh – Skeleton Coast, about the sinking of the ship Dunedin Star. The remains of this ship, by the way, were also found, but more about that later. 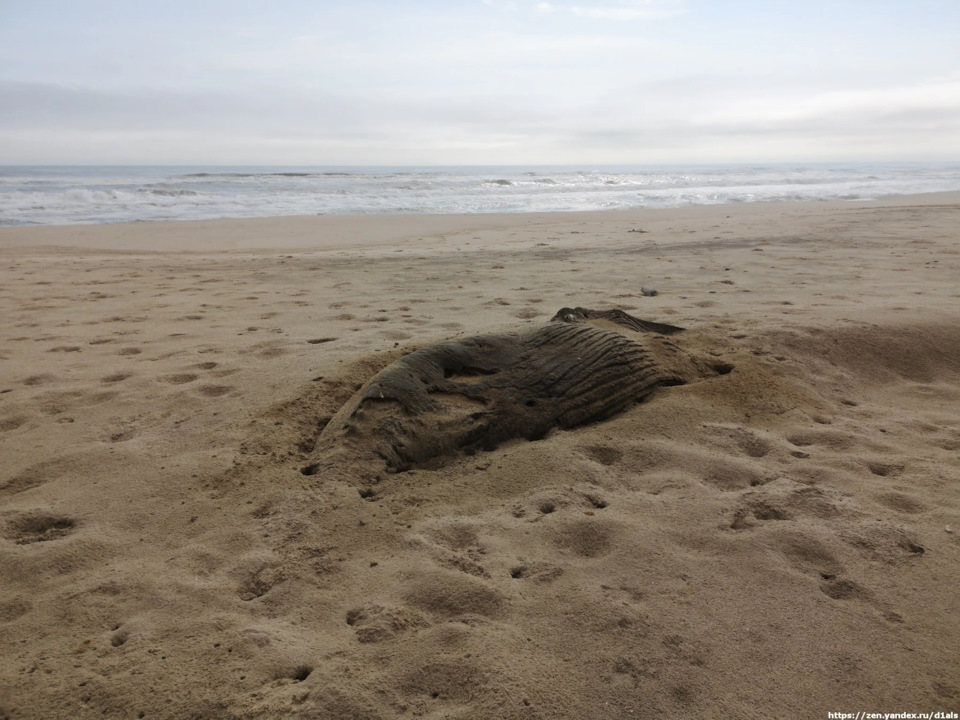 I wanted to get here for a long time. All the more so, since little has changed here over the past centuries. The mystery and mysticism has disappeared, but civilization in this “godforsaken” place on the planet has not appeared. The same complete absence of people and villages for hundreds of kilometers, the same merciless scorching sun, the lack of water and fantastic beauty landscapes Skeleton Coast, and still the thirst for adventure. Parts of wrecks. 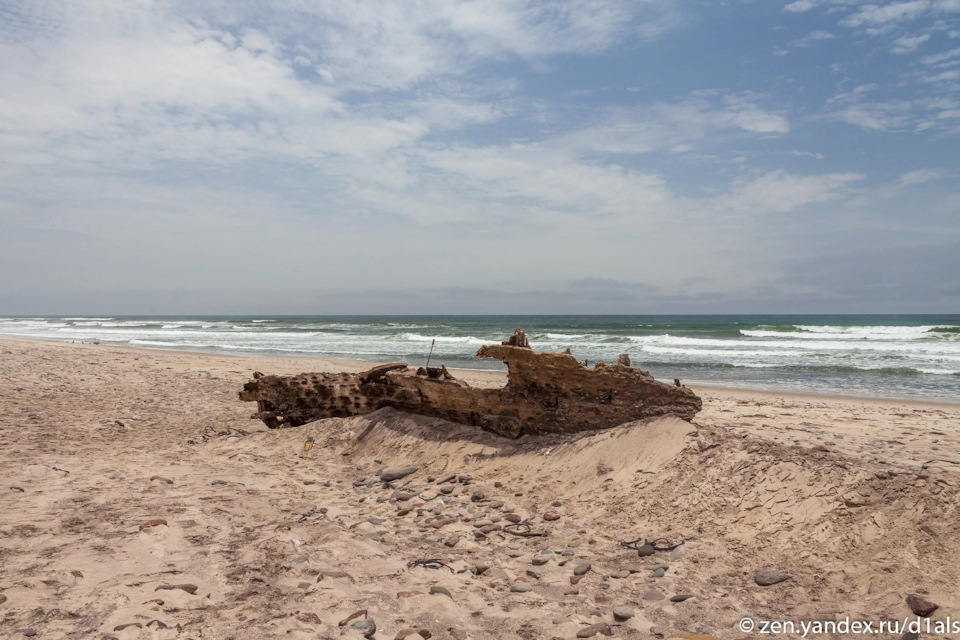 To get here you will have to try a lot. At first you will need to get to the capital of Namibia – Windhoek, and it is no less than about 13-15 hours flight from Moscow. Then rent an SUV and after a few hundred kilometers to be on the coast Walvis Bay. This will be the last bastion of whichever civilization, further people will be with each kilometer – less and less. 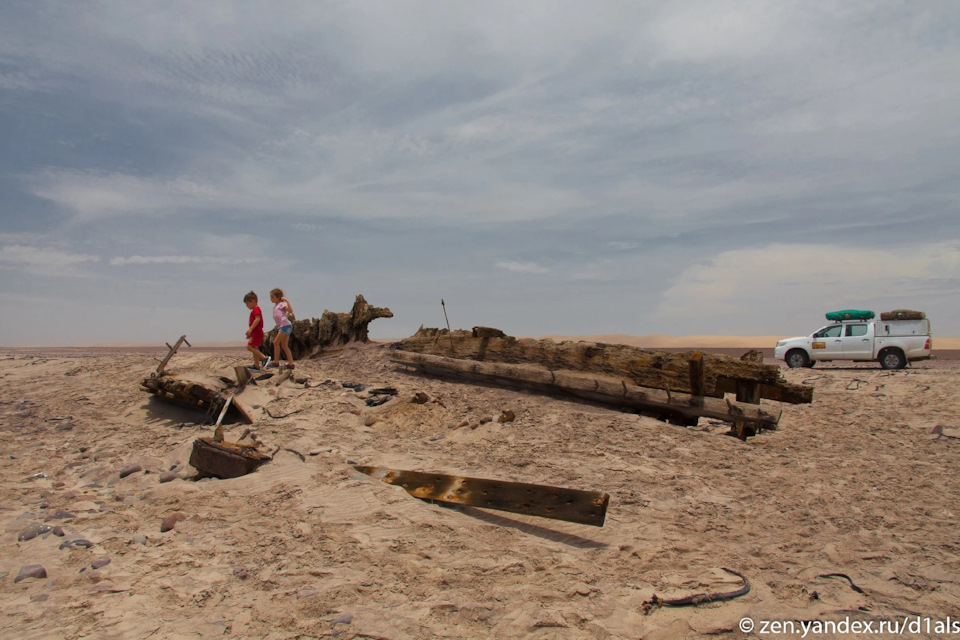 Skeleton Coast is now a huge national park stretching for about 1000 kilometers in length and 100-150 kilometers wide. The park is divided into two parts – a southern tourist area and a northern closed area.

It is only possible to enter the national park through two gates: from the south, the Ugab Gate, and from the east, the Springbokwasser Gate. 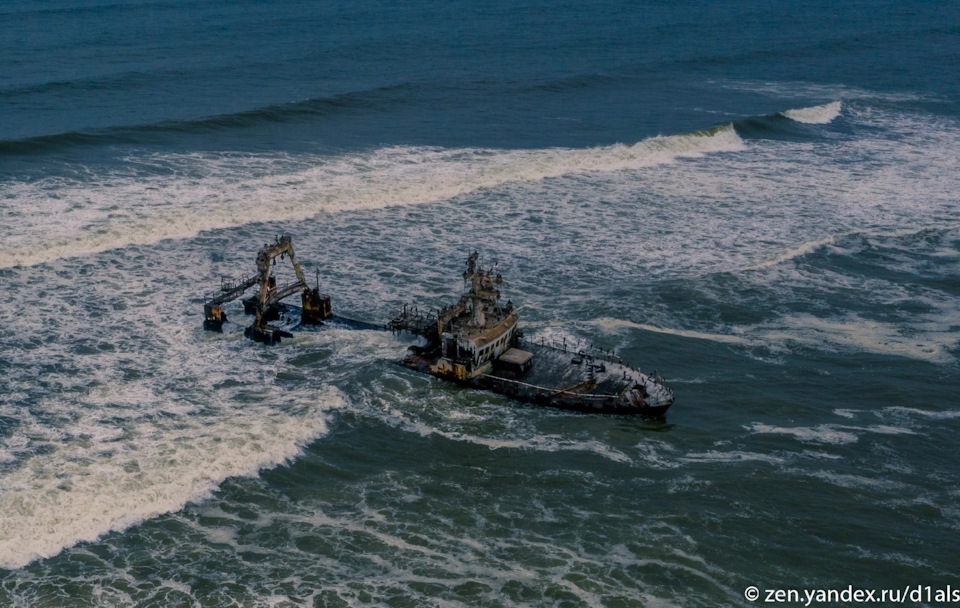 There are several parking lots for hikers and even cell phone service in the tourist part, but it is only 150 kilometers and ends this part of the park at Terrace Bay. 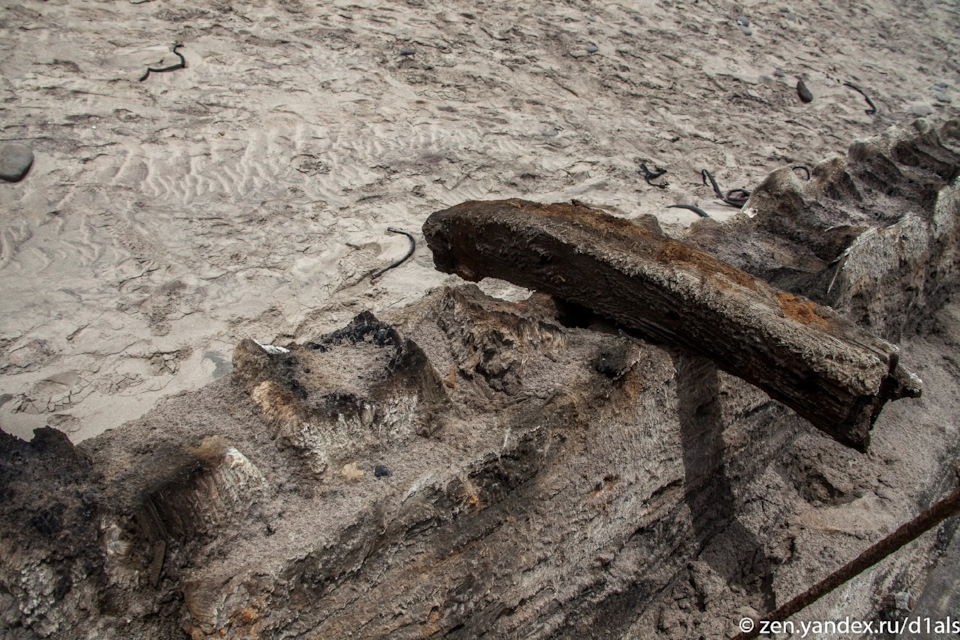 But the remaining 350 kilometers of the closed northern part of the park to the border with Angola are inaccessible to travelers without special permission and accompaniment by licensed guides.

The cost of such an escort can go up to several thousand dollars per person, but it is a justifiable price, considering that really lifeless and perilous for humans places. There are no roads here, only a marked trail from the previous expedition, no communication, and there is absolutely nowhere to wait for help if trouble happens.

And also there are huge dunes, desert elephants, rhinos and desert lions – very encouraging company if you have to get out of here on foot. But despite all this, dozens of adventurers from all over the world come here.

To see with their own eyes the remains of ships, tractors, bulldozers and even airplanes. And also to see those same skeletons, thanks to which this coast and got its ominous name. 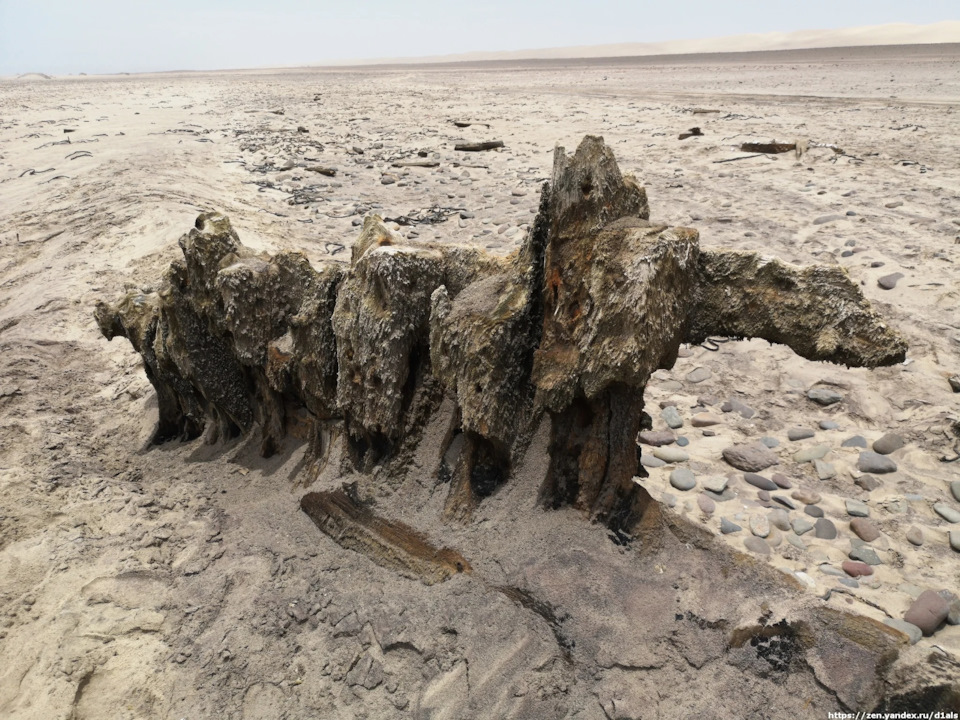 And besides that, there is something else that attracts people here. It is diamonds. Partly because of the presence of diamond deposits, free passage is forbidden to many parts of Namib and the Skeleton Coast. I managed to visit the open part of the Skeleton Coast and the lifeless depths of these dangerous places all the way to Cape Fria, which is 70 kilometers away from Angola. Fantastic places.

But all the while driving my rented Toyota Hilux 2.4 MT off-road camper-camper from Terrace Bay to Cape Fria and further east toward the Kaokaland region, I couldn’t help but feel a sense of inner unease. Something about the aura in these places is not right. Maybe the negative energy from hundreds of crashed ships and dead sailors, maybe something else. But it is worth to visit this place of our planet, if you are an adventurer!

This article is very cool! Thank you very much! And a sea of respect to you! By the way, it turns out that so many animals live there! And they also need to eat and drink something! So they somehow find something to drink and something to eat … So it’s not so bad there … That’s me, “figuratively”.

Ready to shoot a mystical movie.

Now, in the age of satellite navigation and communication to scare the world with the lack of communication =) Elon Musk even built a high-speed internet connection there =)

To start with, you have to be aware of the current satellite internet technology. Starlink (the SpaceX satellite system) is just in the process of deploying a satellite constellation. Commercial access to the Internet via this system is not available right now. Only the first phase of testing in the U.S. began a couple of months ago. Only 954 satellites out of nearly 12,000 have been launched. Can you feel the volume of work?

Yes, you can get internet access via an Inmarsat or Iridium satellite terminal almost anywhere in the world now, but I’m afraid the price of such a terminal will upset you. For example the IridiumGO terminal costs a measly $2k per minute voucher for 1000 minutes of voice or internet for only 800 bucks. I.e. 16 hours of connection will cost 800 bucks. Think of it as Dial-UP. And do you know what your speed will be? 2.4 kbps at most

We use it on arctic trips in Russia. Here’s the only thing, the equipment costs some measly $ 35,000 There is also Inmarsat, but it is as fun as the Iridium. So, yes, there is no communication on the skeleton coast in Namibia. And travelers usually travel there with satellite phones.

There was talk here for no communication per se. Exaggerating the danger of the situation. Twenty years old technology, if not older, is sufficient for an emergency distress signal with GPS coordinates. A rescue helicopter in the nearest town or the local military probably has one. Starlink has already been added for laughs.

I love it when amateur theorists start telling me such curious stories. How often do you use satellite phones, satellite GPS – trackers in a year? I’m sure much less often than I do

Few people will buy such a voucher for one trip for a couple of weeks. Simply because it’s the stupidest waste of money if you don’t need the satellite for work. You won’t spend those 600 minutes and it will “burn out” on you.

Moving on, about helicopters. How many times have you been to South Africa?

It won’t be a rescue helicopter, it will be a ranger and after that you will be sent to familiarize yourself with the local penal code. And if you’re unlucky enough to go to the Orange River, you’ll be shot and killed, so they’ll deal with it.

And knowing all this information, you went there with your children? Indeed, the levity of some people knows no boundaries … but come on, who am I to judge =)

You call only a CONVICTION, do not waste your nerves on the answers to such comrades

To start with, you have to be aware of the current satellite internet technology. Starlink (the SpaceX satellite system) is just in the process of deploying a satellite constellation. Commercial access to the Internet via this system is not available right now. Only the first phase of testing in the U.S. began a couple of months ago. Only 954 satellites out of nearly 12,000 have been launched. Can you feel the volume of work?

Yes, you can get internet access via an Inmarsat or Iridium satellite terminal almost anywhere in the world now, but I’m afraid the price of such a terminal will upset you. For example the IridiumGO terminal costs a measly $2k per minute voucher for 1000 minutes of voice or internet for only 800 bucks. I.e. 16 hours of connection will cost 800 bucks. Think of it as Dial-UP. And do you know what your speed will be? 2.4 kbps at most

We use it on arctic trips in Russia. Here’s the only thing, the equipment costs some measly $ 35,000 There is also Inmarsat, but it is as fun as the Iridium. So, yes, there is no communication on the skeleton coast in Namibia. And travelers usually travel there with satellite phones.

Sofa experts will still not understand such a reasoned response from a professional of his craft, but it was a pleasure to read both the article and the responses to the comments)