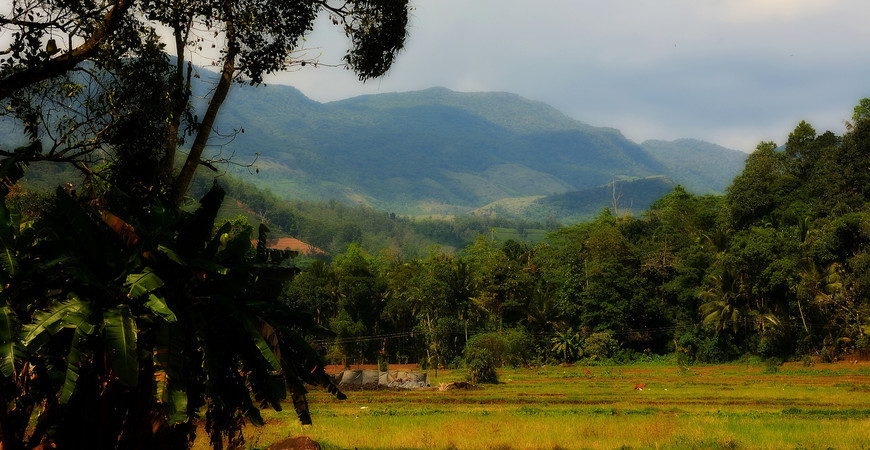 Sinharaja Rainforest is the largest rainforest in South Asia, preserved almost in pristine condition, and the only tropical rainforest in Sri Lanka. The national park stretches in a narrow strip in the southwestern part of the island, across three provinces – Western, Southern and Sabaragamuwa. Unique in its biodiversity, climatic conditions and landscape, the place attracts natural scientists and ecotourists from all over the world. Valleys here are juxtaposed with hills, picturesque mountain slopes and ridges, and huge trees up to 50 meters high are in harmony with tropical lianas, stunted ferns and creeping horsetail.

The forest reserve is a veritable repository of an ancient ecosystem. It is famous for its rich flora and fauna, characterized by a high concentration of endemic (indigenous only) plant and animal species. The jungle is filled with numerous water springs. It is always cool and very humid.

Features of the national park

The name of the rain forest is translated as “lion king” or “kingdom of the lion”, which is not surprising. The main population of Sri Lanka – the Sinhalese – consider themselves the descendants of lion people, and on the flag and emblem of the state the image of the legendary king of beasts is emblazoned. It is obvious that the natural treasure is perceived by the local population as the highest gift, which should be treated with all respect and reverence.

The national park is a real treasure trove of amazing world, hiding a huge number of untouched natural treasures. The area was first declared a protected area in 1875, which ensured protection of forest lands from logging and animals from mass extermination. The Rainforest Park became a biosphere reserve in 1978, and 11 years later it was added to the UNESCO list.

The territory of Sinharaj is conventionally divided into two sections. One of them is characterized by lush vegetation, the other – is deprived of the original cover as a result of the passage of lava that escaped from the Earth’s interior during one of the earthquakes. There are mountain peaks within the park’s boundaries. The highest is Hinitipigala (1170 m) and the most popular is Maulavella (760 m). Their peaks offer stunning views of the surrounding nature. Above the lowlands rise picturesque mountain peaks: Sinhagala, Kosgulana, Pathinigala, Dotulugala, Tibbottagala.

There are many waterfalls in and around the rain forest. Nine rivers flow through the park.

The inhabitants of Sinharaja rain forest

The reserve is home to several species of rare animals that occur naturally only within the boundaries of a certain natural area of Sri Lanka. The endemism of mammals and butterflies here is over 50 percent and of birds 95 percent. Nineteen of the 20 bird species are unique as they are not found anywhere else in the world. In addition, more than 60 percent of the forest vegetation belongs to the endemics. Out of 217 species of trees and climbing lianas, 139 species are exclusive to this area, 16 of which are rare.

A number of the rain forest’s inhabitants belong to endangered and endangered species. These include:

Deer and pythons, giant squirrels and martens, mongooses and monkeys, armadillos and other representatives of mammals, birds, fish, amphibians and butterflies can be found in the forest.

In terms of duration, walks in Sinharaja are designed from 2 to 8 hours. How much interesting you can see during this time depends on the activity of the group and the qualifications of the guide. Not all guides are willing to take tourists on difficult and unique trails. Most prefer to choose less impressive routes. According to travelers’ reviews, a small additional fee helps to inspire the guide.

READ
16 of England's most beautiful places to visit, Great Britain

Tourists are offered several hiking routes. In addition, you can take advantage of the offer to overcome part of the route in a jeep. Such a service must be paid for separately.

Walking through the rain forest requires at least minimal physical fitness and appropriate equipment. Shoes should be as closed as possible, with anti-skid soles, and clothes – must have long sleeves and pants. Be sure to bring a light hat and socks. At the checkpoints you can rent high shoe covers.

Forest insects and leeches do not neglect the exposed parts of the body. Some of their bites can be extremely dangerous. For example, leeches secrete substances that reduce blood clotting. It can be quite difficult to stop it without medical intervention. It is necessary to be careful during the trip, and after its completion – carefully inspect the clothes.

To be able to have a longer trip, it is recommended to go as early as possible. To do this, you should arrive at Sinharaja in advance and spend the night near the park.

Entrance to Sinharajah is through ticket centers and checkpoints. They are located at the entry points to the national park. The main ones are:

Visiting time is limited to the period from 06:30 to 18:00. During the rainy season the routes are closed.

Guide services are charged separately. The cost depends on the difficulty and length of the route. A three-hour hike will cost about $6-7 per person. Prices may vary depending on various factors.

How to get to Sinharajah Rainforest

You can enter the national park from either the north or the south. In the first case, the nearest settlement is Kalavana, and in the second, Deniaia. From Ratnapura, the best way to get there is through Rakwana. To the west of the forest is Neluwa.

Bandaranaike International Airport is located in Colombo, Sri Lanka’s largest city. From there, many villages can be reached by bus. There are rail connections to villages located in the southwestern part of the island. Buses or cabs will take you to the end point.