Attractions in Antalya are represented by a large number of natural and man-made monuments of architecture. They are picturesque, interesting, with a rich history. If you are going to Antalya not only for a beach holiday, read my review about the best sights of the resort. From it you will learn where on the map of the city you should mark your visit.

What to see in the city of Antalya itself

The first thing that comes to mind when you say “Antalya” are the long sandy beaches and the Old Harbor, where yachts from all over the world are moored. However, this is not all the interesting places of the resort. The city is great for educational or sightseeing holidays. There is a lot to see and do in this city.

Advantages: – the card is opened in a country friendly to Russia, which is not under sanctions – named card (Visa or Mastercard), works anywhere in the world – the card can be in dollars, euros, multicurrency. – Card can be used to pay for foreign subscriptions to Google and Apple, applications, to make a purchase of cryptocurrencies, to pay for tours or airfare, etc. 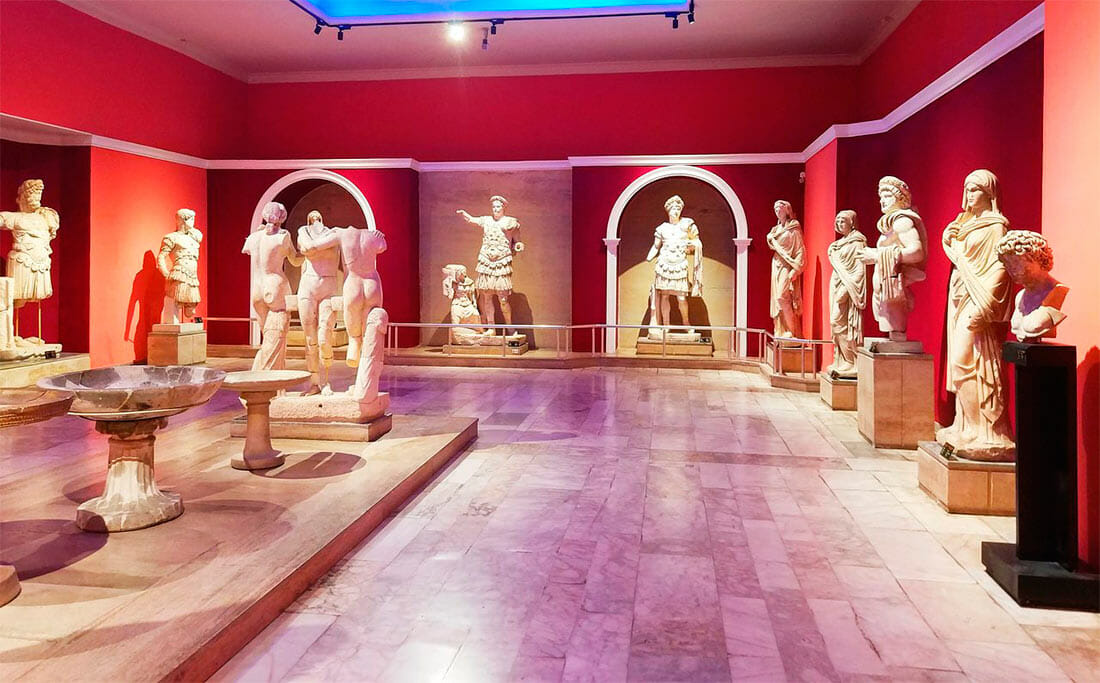 One of the most famous landmarks of the city! A very popular touristic building in Antalya, located at KonyaaltıCad. 88. Museum covers an area of 7 thousand square meters. The grand opening was held in April 1985. The exhibits are divided into 13 exhibition halls. Among them:

In the garden of the museum there are large exhibition elements – statues, tombs, machinery. The exhibits are very numerous. To explore all of them, not even a month is not enough. 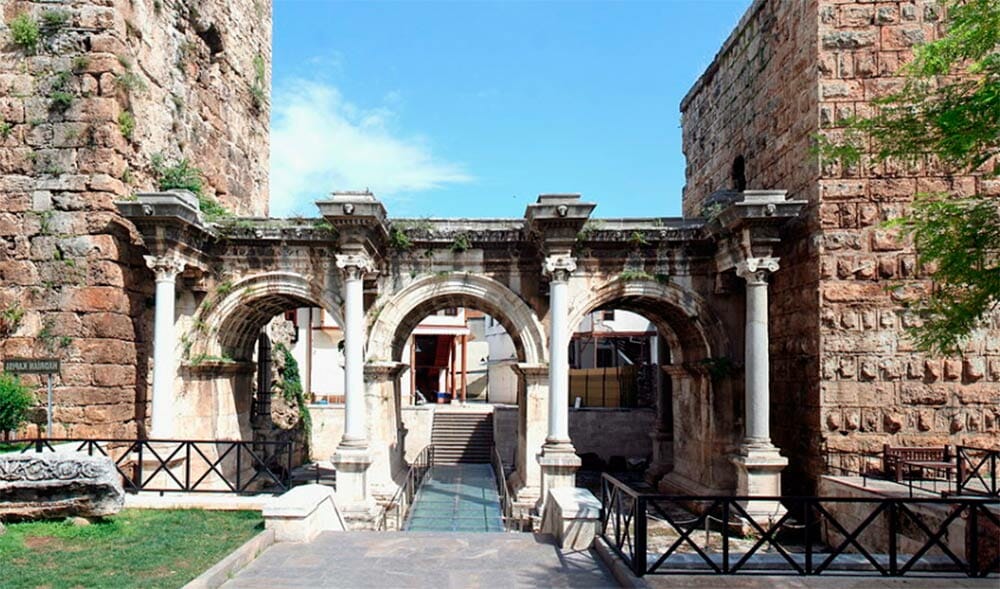 The second most visited landmark of the city is the Hadrian’s Gate. Its coordinates are: Barbaros, 07100 Muratpaşa/Aptalya. It is a high triumphal arch built in honour of the Roman Emperor Hadrian in 130 AD. It has two colonnaded facades, three entrance arches, four pillars and towers. The height of the building is 8 meters. The arch serves as a passage to the Old City of Antalya. 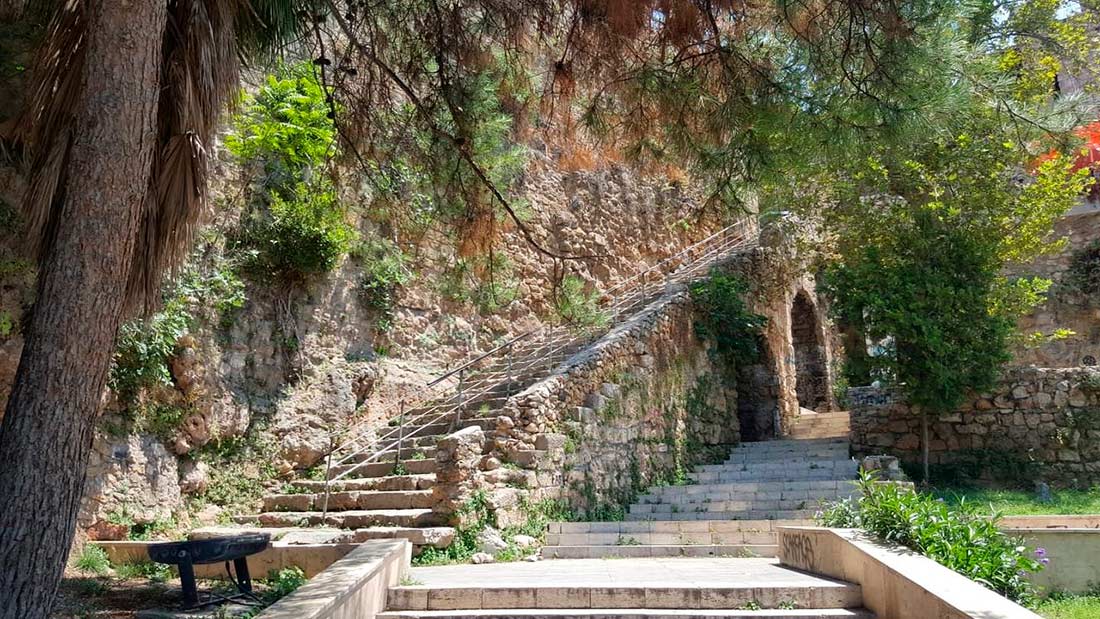 A self-guided visit to Antalya must include a tour of the Old City district, Kaleici. Its area is 35 hectares. The architecture of the district is diverse: here you can find buildings in the Baroque, Gothic, and Classicist styles. Among them the most noteworthy are: 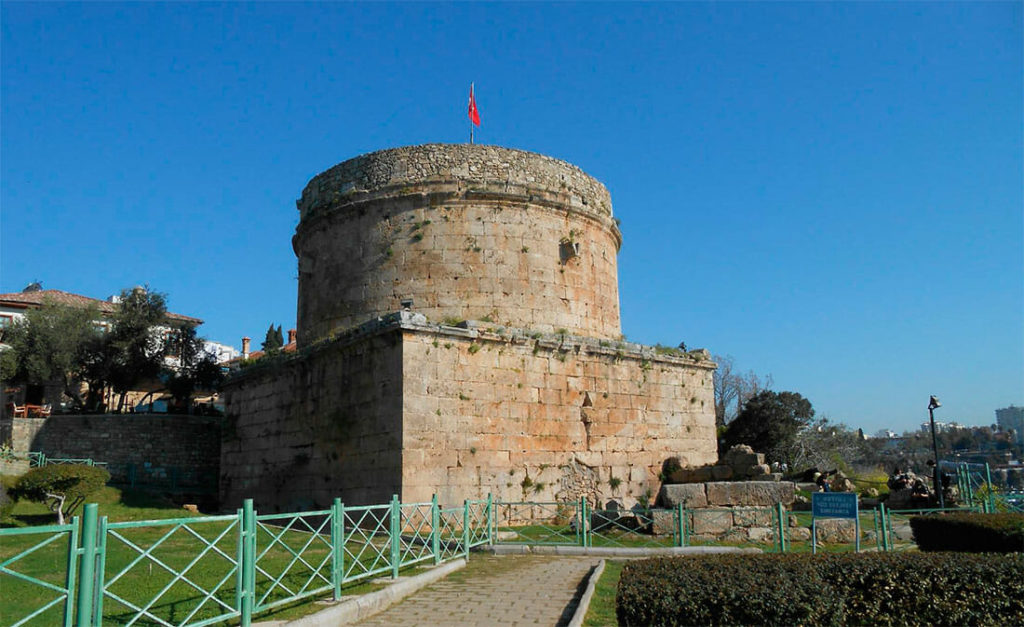 The Roman Empire building (2nd century AD) was erected in the southern part of the city bay. It is shaped like a yellow drum. It stands on an ancient square base. Earlier the 13,5 m tower was crowned with a pointed golden dome, it has not been preserved up to now. For many years the building served as a lighthouse.

Other versions say it was a defensive structure or a tomb. You can climb to the roof for free and admire the magnificent view of the resort and the sea. Walk near the fortress walls and take pictures of the area from different angles. The pictures will be great!

The Old Port in Antalya 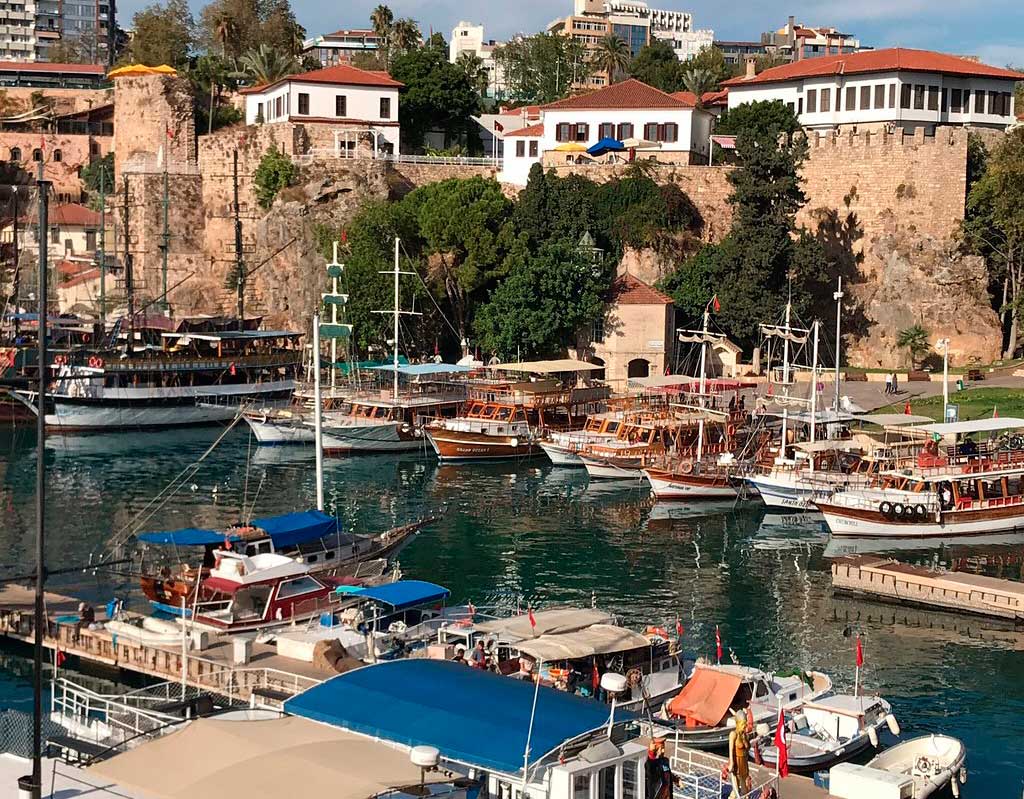 This is one of the most beautiful sights in the Turkish city! You can see it 24 hours a day and for free. It is located in the center of Kaleici and is the heart of it. The old port of Antalya was first mentioned in the II century BC. A major reconstruction took place in 1988. The port is always crowded: right on the shore the local amateur artists paint pictures, play live music, sell souvenirs and street food. A great place to explore the Turkish culture and way of life! 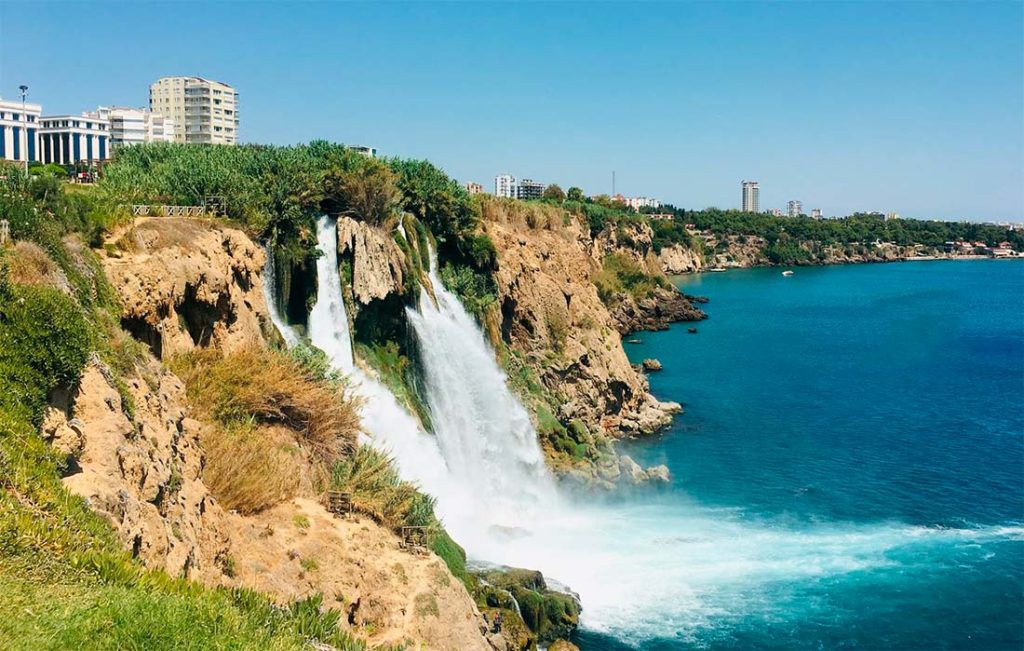 This is a cascade of waterfalls that are up to 40m high. You can admire the natural attraction from the upper and lower tier. The waterfalls were formed by the river Duden. Really a beautiful place, a must visit!

Territorially the waterfalls are located 10 km from the old district of Kaleici. You can get here by bus (KL 08, leaving every 15 minutes from Konyalta). There are also guided walks to them. 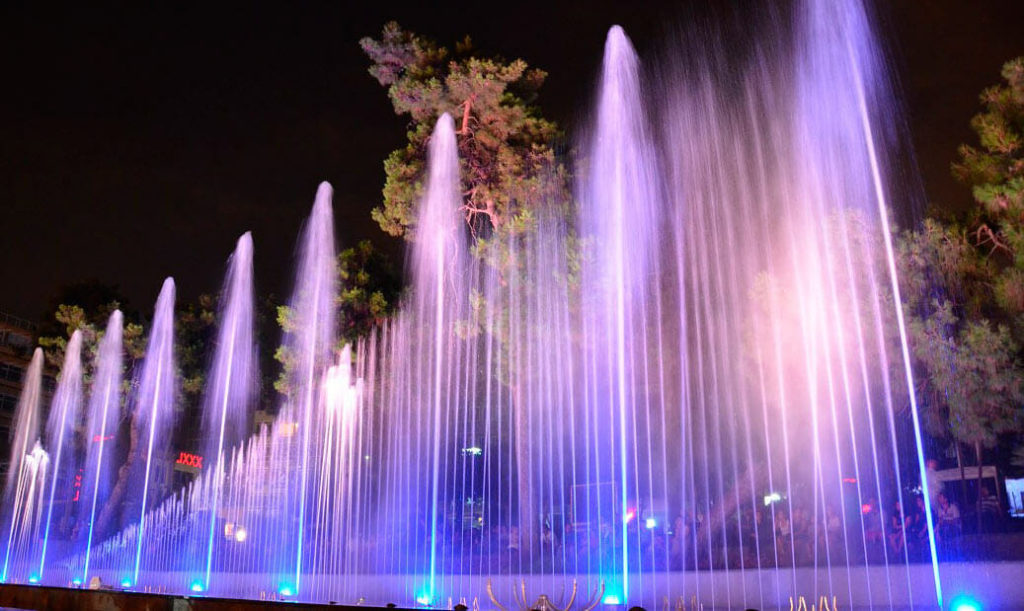 A common resort entertainment is the light show of fountains. You can see it on the central square of Antalya (Republic Square). It always takes place after sunset. The show is a “dance” of the fountains with musical accompaniment. It often changes – from classical opera to cheerful folk tunes.

Multicolored water jets sway in different directions, fall beautifully cascades, overlapping. Video projections and laser installations add to the effect. At the end of the program the Turkish anthem is played and portraits of former president Mustafa Ataturk are played. The show is free to watch.

What to see near Antalya

Not far from the resort of Antalya, too, a lot of wonderful places for recreation. To visit them it is enough to rent a car in Antalya and drive yourself around the nearby attractions. 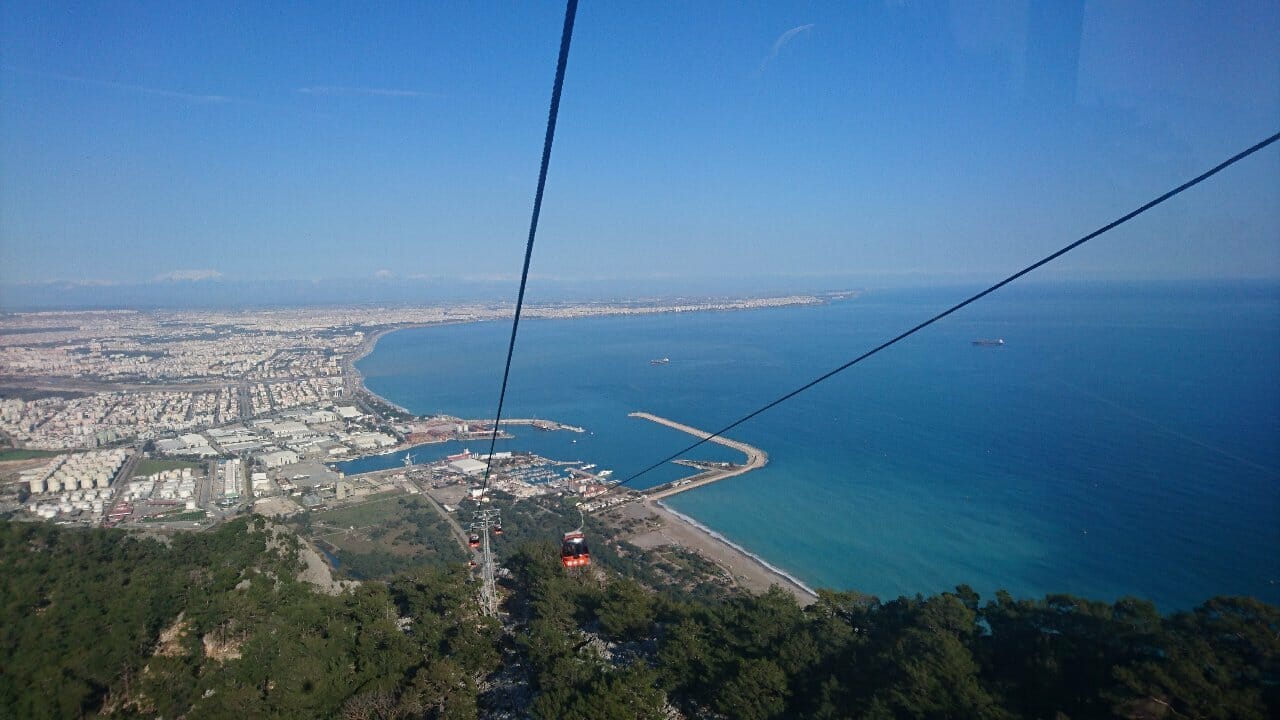 This is a picturesque steep mountain, generously planted with conifers. Its name in Turkish means “hill”. It is situated 15 km to the south-west of the center of Antalya. The mountain reaches 605 m above sea level. This is one of the best viewpoints in the whole of Turkey! You can see the sea and the mountains from here.

There is a café at the top with affordable prices for traditional Turkish food. At the foot of Tunektepe is Sari Su Park. There are children’s playgrounds, barbecue areas, and thousands of evergreen trees and shrubs. A great place for a picnic!

There are two ways to get to the mountain:

I will not describe the first way. Much more interesting to climb Thunektepepo cable car, which consists of 36 cabins. Each cabin holds 8 people. Cabins are equipped with large panoramic windows, and on the way you can enjoy the magnificent views. The length of the road – 1706 m. The ascent takes 10 minutes.

Please note! In strong winds or fog the ropeway does not work. 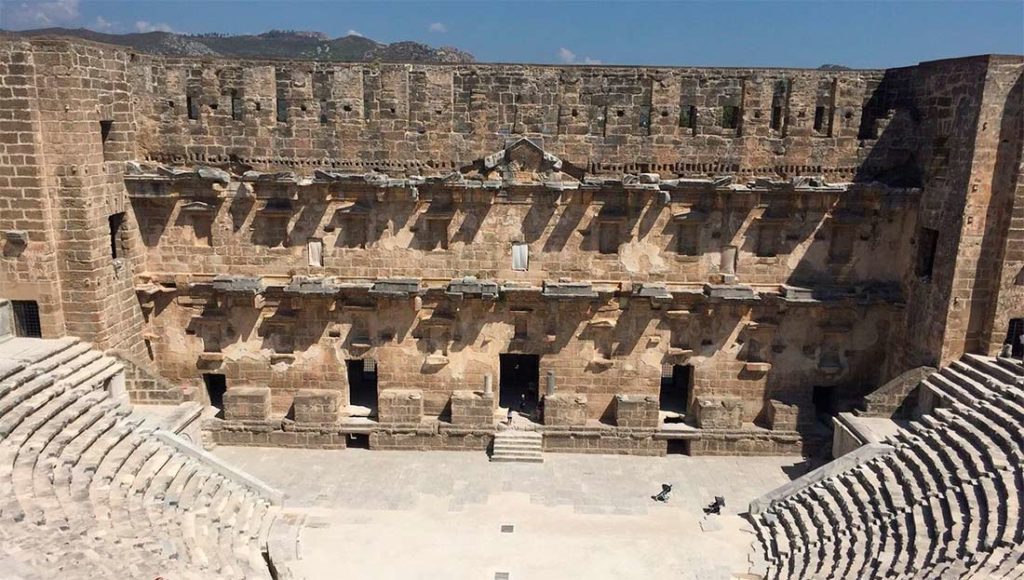 The ancient city 35 km from Antalya is visited by several thousand travelers annually. It is located 15 km from the sea, there are no hotel complexes or shopping malls. You can come here for 1 day as part of a vivid contemplative holiday in Antalya. The place is really interesting, with a rich history. If you believe the documents, Aspendos emerged in the X century BC, just after the end of the Trojan War. Today it has the following objects preserved in good condition:

If you walk about a kilometer northeast of the Roman amphitheater, you can see the aqueduct. Its length is 20 km. In ancient times, the structure served to supply fresh water to the city.

You can enter the territory freely.

The ancient city of Termessos 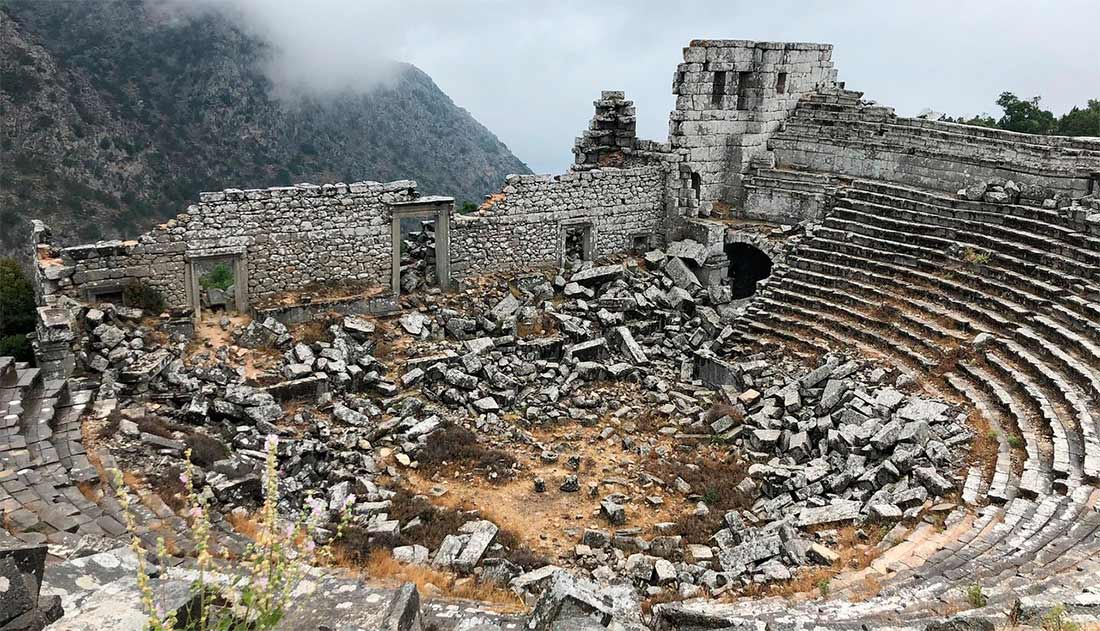 Termessos, another ancient town, is located 30 km southwest of Antalya, at an altitude of 1050 m above sea level. The first references to it date back to the 6th century BC. Alexander the Great had the city under a long siege on the road to Phrygia, but the great leader was not able to conquer it.

The best way to get to Termessos is by car on the highway D350 to Isparta. After the signpost Korkuteli, turn left and drive towards the national park. We recommend wearing comfortable shoes, pants, and a sweater or long sleeve T-shirt to explore the city. There is no infrastructure, so make sure you have drinking water.

What to see in the ancient city itself? The main square with the Agora is interesting. Nearby are five huge underground cisterns for storing drinking water. Well-preserved gymnasium, a few temples, the city hall and the Roman amphitheater.

Necropolis is a local cemetery. In this cemetery thousands of wealthy citizens have found eternal rest. Burials were held in richly decorated sarcophagi. Crypts were cut out directly in rocks. Bas-reliefs depicting furies were made along the perimeter of many crypts. The relatives of the deceased hoped that such a security measure would protect the graves from break-ins.

There are no archaeological excavations at Termessos. Entrance to the area is free.

The ruins of the city of Perge 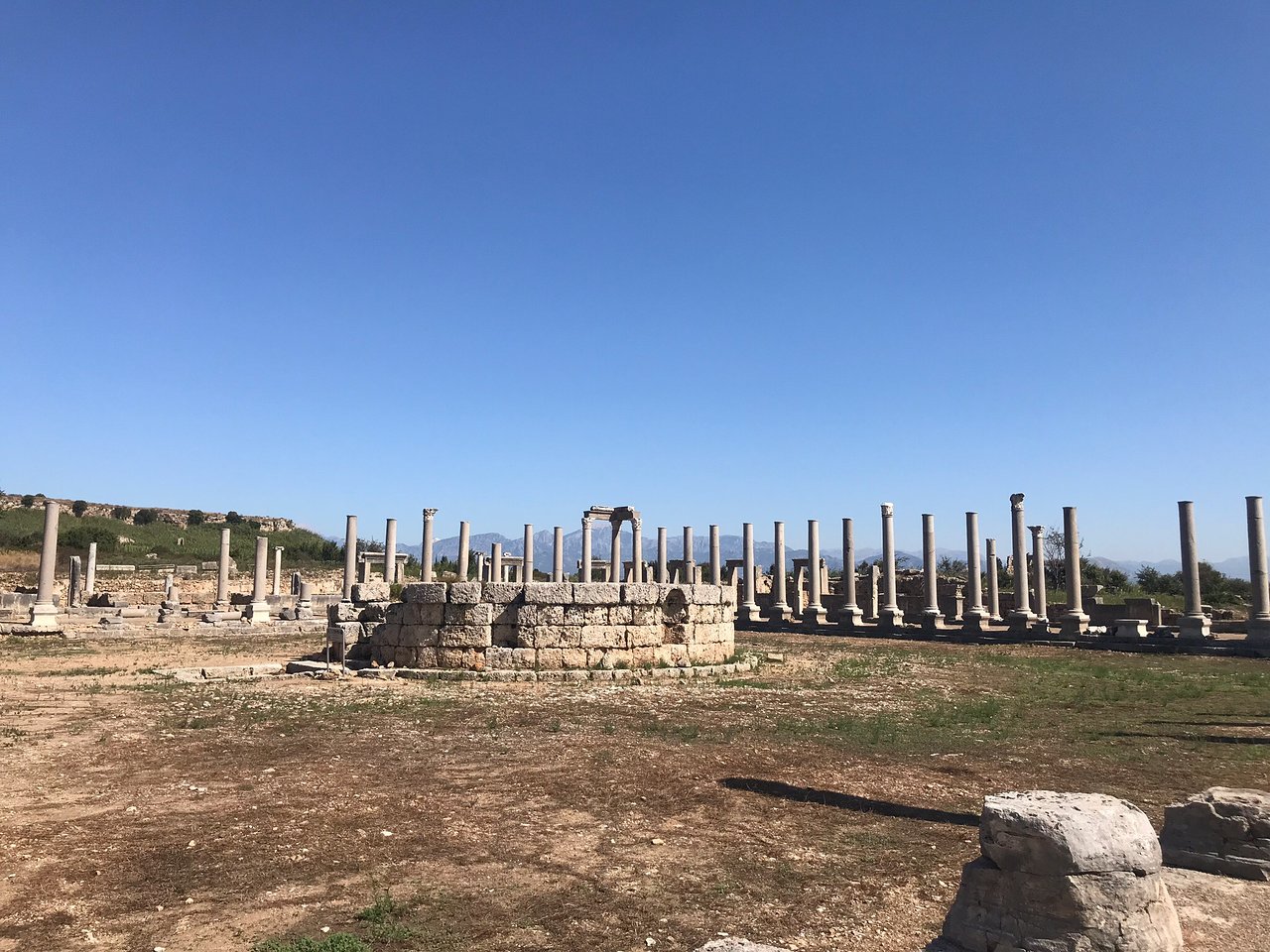 Many centuries ago the city of Perge was the main settlement of Pamphylia. The main building in the city was the temple of Artemis. The goddess was highly revered here. During archaeological excavations, scientists found many artifacts (sculptures, coins, jewelry) depicting Artemis. The temple has not survived to this day. But the following objects have been well preserved:

Where to go with children in Antalya

Travelling with kids has its own rules. When you get tired of lying on the beach, organize a day of entertainment! For this purpose come 4 places in Antalya. 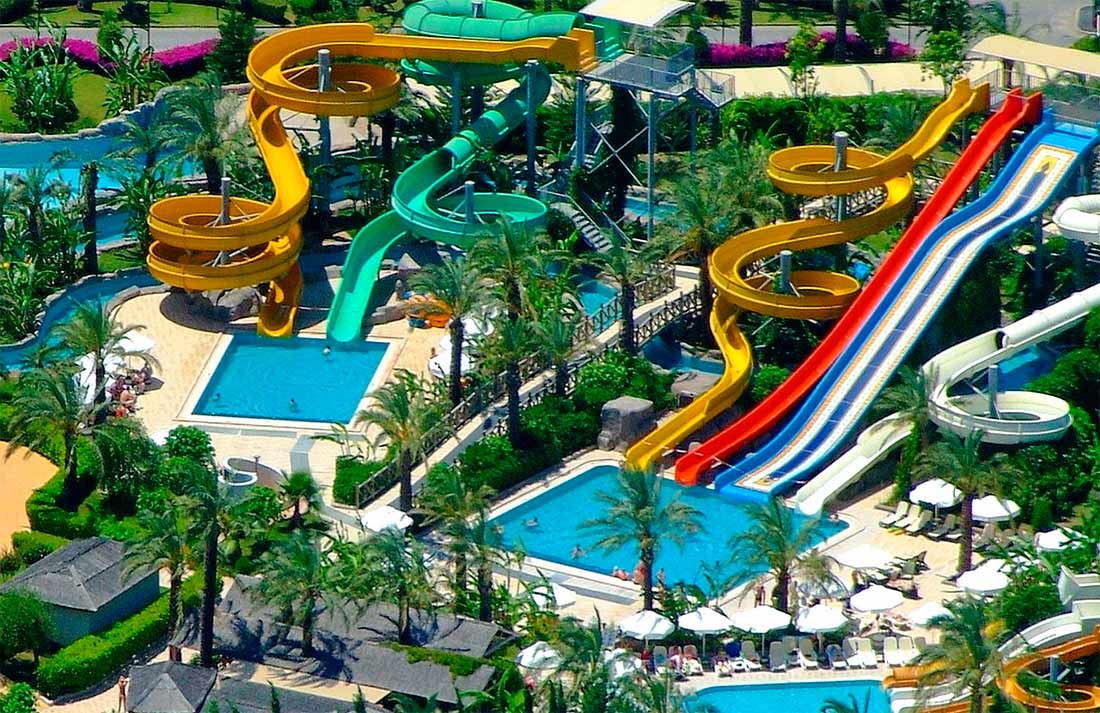 A large water amusement park accommodates 6 thousand visitors at a time. There are 9 slides of varying height and complexity, you can bask in the pool, explore an underwater cave.The infrastructure is well thought out for a comfortable holiday: there are changing rooms, showers, toilets, medical aid center with a doctor on duty.

The water park area is large, and everything is clean. There are several cafeterias (prices are average), bars, a cinema, souvenir shops. In the evening there is a disco. 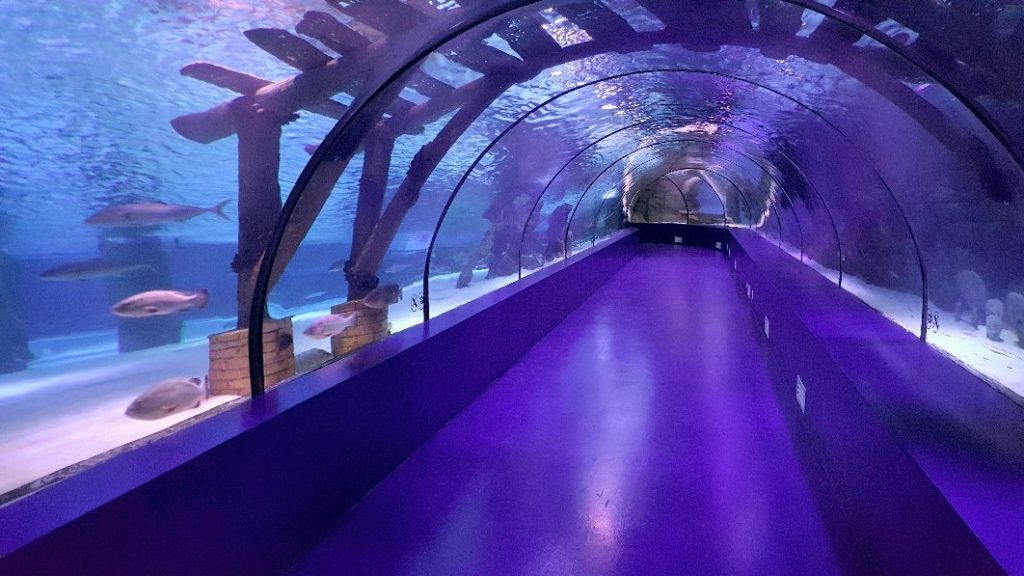 A large and modern oceanarium in Antalya – a paradise for children! On an area of 15 thousand square meters live 10 thousand sea creatures. The total number of aquariums is 40. The oceanarium has several “business cards”:

READ
8 important monuments of ancient Egypt, which you should not miss 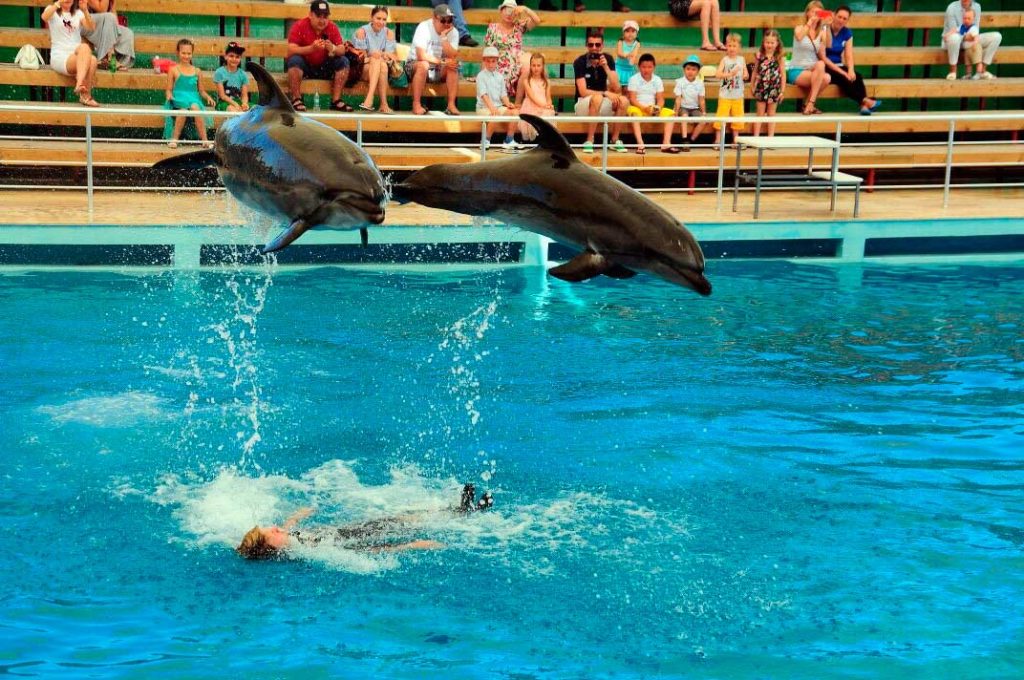 The dolphinarium is located in the Aqualand water park. Every day, at 11:00 and 14:30, there are magnificent 60-minute shows with white whales, dolphins and seals. The program is rich and shows a high level of sports and acting skills of the animals.

You will see ring-jumping, a game of basketball, a music lesson, and a rousing dance. After the show you can feed the artists, swim with them in the pool and take pictures. There is a souvenir store with good prices. 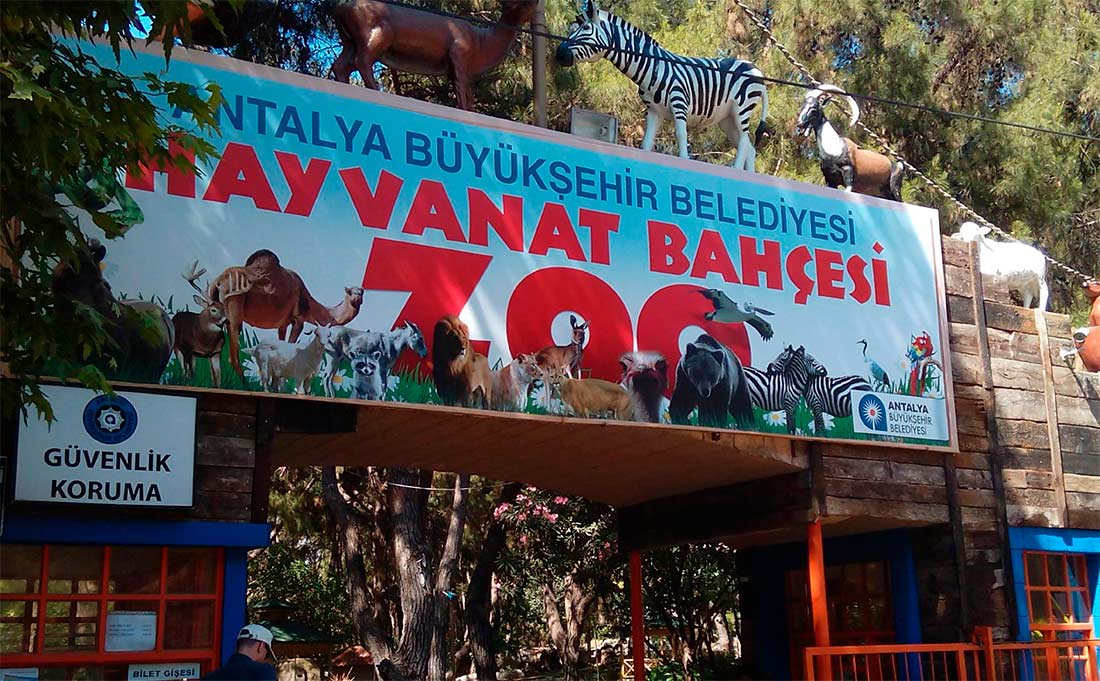 Another attraction to visit with children is the Antalya Zoo. It created a comfortable environment for animals, birds and fish. The date of opening is 1989. The main part of the zoo is located on a mountainside. The terrain is uneven, but picturesque.

In front of the zoo is a large area for picnic and sports. Everywhere is clean, there are trash cans and benches. There are alleys for cyclists. On the other side there are sports grounds. There you can play soccer, table tennis or basketball. Equipment will be given out on the spot.

In the zoo itself you will find 140 species of animals. Zebras, crocodiles, bears, llamas, hyenas – not a complete list of all the local inhabitants. A huge number of birds. There are 15 species of pheasants alone.

There is a children’s area in the zoo, where you can feed the inhabitants from the hands. Wild goats, hares, gazelles and cranes gladly take treats from hands and pose for photos.

In the famous resort town of Antalya you can come not in summer but at any other time of the year. There will be something to do and children and adults. The best way to see the sights is to rent a car. To many sites organize excursions. You can buy a tour in any travel agency of the city or on the Internet. Do not forget to bring your camera!