The Shondong Cave was discovered in Vietnam’s Quang Binh Province relatively recently, in 1991. The first scientific research confirming its gigantic size was carried out just 6 years ago. Measurements made by speleologists have shown that the Deer Cave of Malay, previously considered the largest cave in the world, will have to cede the primacy to the new natural sight. The site is located 250 meters above sea level in Phongnya Kebang National Park, 70 km west of the provincial capital Dongkhoi and about 500 km south of Hanoi.

Story of the discovery

The Vietnamese and world public’s belated introduction to the enormous cave is a great confirmation that we don’t know everything about planet Earth. There are vague rumors that Shondong was used as a reliable bomb shelter during the Vietnam War, but the official year of discovery is 1991. That’s when a local man, trying to hide from the rain, ducked into the thicket and suddenly found himself in a cave of staggering proportions. He hesitated to go further away from the entrance: An incomprehensible and frightening noise was heard from inside. It turned out later, it was the water of the underground river.

For many years the discoverer hesitated to return to the cave, and to find it in the jungle was a problem, but in 2009 he became a guide for the British expedition cave explorers. The first attempt was unsuccessful: Advancement was hampered by a calcite wall height of 60 meters. The following year, researchers have found a way to overcome it, held all the measurements and announced a new world record.

Fongnya Kebang National Park opened on the site of karst underground passages. Shongdong is part of a complex system of labyrinths reaching the borders with Laos, penetrating the limestone rock. The cave was formed about 5 million years ago by the painstaking work of a river that carved its way through the rocks. The result is a giant tunnel consisting of 150 halls, up to 200 m high and 150 m wide. In some places the upper ceilings collapsed, and in the cave began to penetrate the sunlight, provoking the emergence of veritable underground gardens. Interest in Shondong woke up after the photos of Carsten Peter, who acted on the assignment of the National Geographic magazine, were published. Huge halls, calm waters of the underground river 2,5 km long, high domes, stalagmites up to 70 m high, verdant slopes of the limestone rocks – all this could not but attract attention of potential tourists.

From the nearest tourist sites, Shondong is separated by a 10-kilometer walk through the jungle. The cave can only be accessed outside the rainy season, which lasts from October to February in Central Vietnam, otherwise the underground river can overflow and make parts of the route impassable. The giant was only opened to visitors in 2013. On the first visit it was visited by only 6 people, including guests from Russia. Each had to pay $3,000 for a week’s stay in a tent in the cave. In subsequent seasons, the rate has not changed, but despite the high prices, the queue of those who want to get inside has not decreased. In 2015, 500 travelers were permitted to visit Shondong between March and August.

Tourists who didn’t make the coveted list shouldn’t feel bad: in addition to Shongdong, there are many interesting things to see in Fongnya Kebang. Even before the official survey, in 2003, the site was included in the list of World Heritage UNESCO as a unique network of caves with a total length of more than 126 km. Some of them have been specially equipped for visits. At Thien Duong, which is 31 kilometers long, wooden bridges and stairs were built and electricity was installed in 2010. Tourists visiting it drive up to the parking lot, then walk 1.5 kilometers to the cave entrance or drive that way in rented golf cars. The cave is famous for its magnificent stalactites and stalagmites of complex shapes. Travelers enter Phong Nha by boat, taking 2 hours to explore the many halls and passages. The cost of a visit to Thien Duong averages $6 USD, to Phong Nha, about $2 USD, depending on how full the boat is.

READ
What to see in Hanoi

How to get to the national park

Phong Nha Cabang National Park is visited by nearly 1 million Vietnamese and 90,000 foreigners annually. It takes about 1.5 hours to reach the capital of Dong Hoi Province from Hanoi by air. From there to the start of the hiking route to the cave is just over 1 hour on a steep road. Another popular option to reach Dong Hoi is to use the railroad that connects Hanoi and Ho Chi Minh along the North-South route. Motor transport runs from the Vietnamese capital for 10 hours along the Ho Chi Minh highway that skirts the northern boundaries of the park.

Prospects for the development of Shondong as a tourist destination

Entrepreneurs have calculated that until mass visits become popular, the project will not bring tangible profit. It is necessary to build a hotel complex and to build a ropeway of 10 kilometers to Shondong. Categorically against the business proposal came the advocates of nature: they wrote public letters demanding not to allow the construction. So far, the question of increasing the accessibility of Shondong remains open. Judging by the fact that the other caves have safely survived the expansion of the flow of tourists, Shondong in the near future waiting for the same fate. 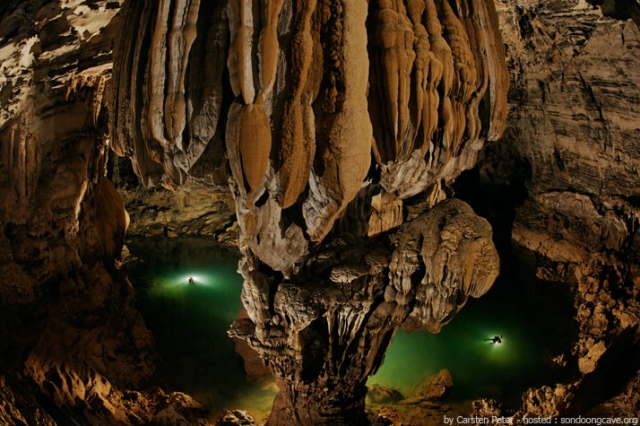 The name of the Song Dong Cave (hang Sơn Đoòng) means “mountain river” in Vietnamese. It is located near the border between Laos and Vietnam and is currently the largest cave in the world. This natural attraction is so large that inside it there is a huge, fast-flowing underground river that used to frighten the natives with its noise.

The Shondong Cave was discovered not long ago by a local resident named Ho-Han. It happened in 1991. But only four years ago – in 2009 – the site became public. This happened after a team of scientists from the British Association for the Study of the caves, led by Howard and Deb Limbert (Howard and Deb Limbert), conducted a study in Phong Nha-Kẻ Bàng, which ended in April 2009. Their work was stopped by a huge wall of calcite.

READ
Natural harbors: top 7 most beautiful bays and coves in the world 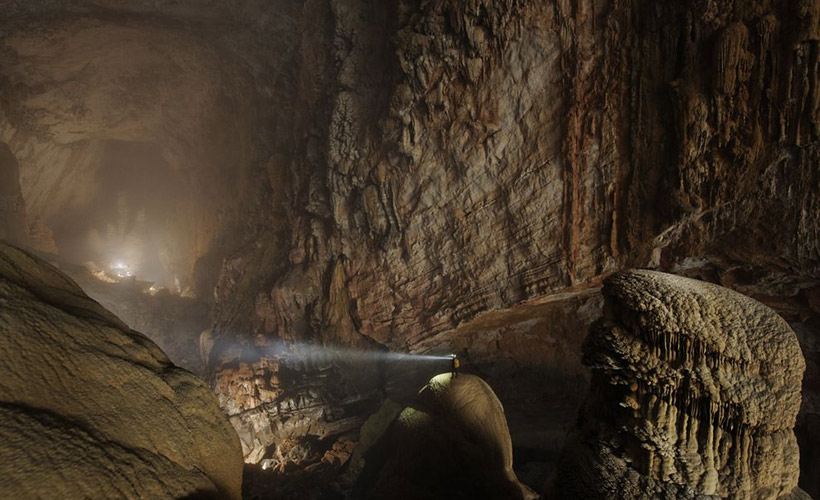 The Limberts reported that it was five times larger than Phong Nha (Phong Nha) Cave, which was previously thought to be the largest in Vietnam. Phongdong stretches more than five kilometers in length, 200 meters in height and reaches 150 meters in width. 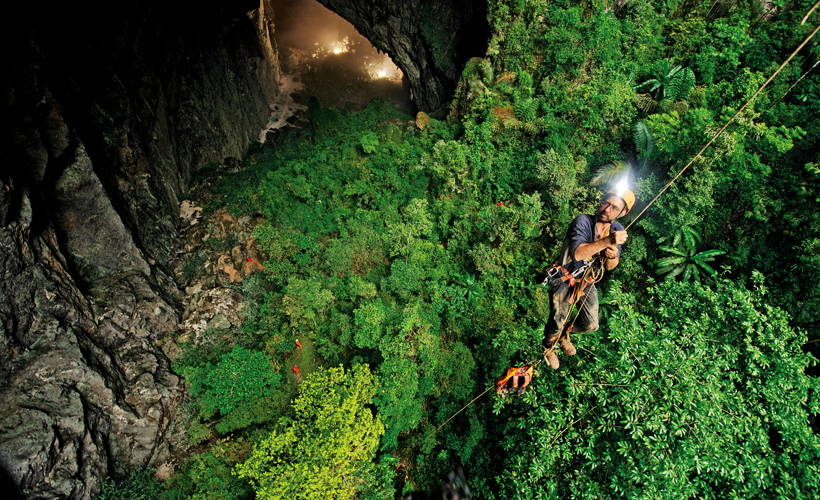 With such dimensions, Shondong exceeds the Deer Cave in Malaysia, which was thought to be the largest cave in the world. Exploration work inside is still in its infancy; the cave’s exit was discovered in 2010. A team that climbed the cave’s 200-meter wall found pearls the size of baseballs. They are abnormally large by any standard. 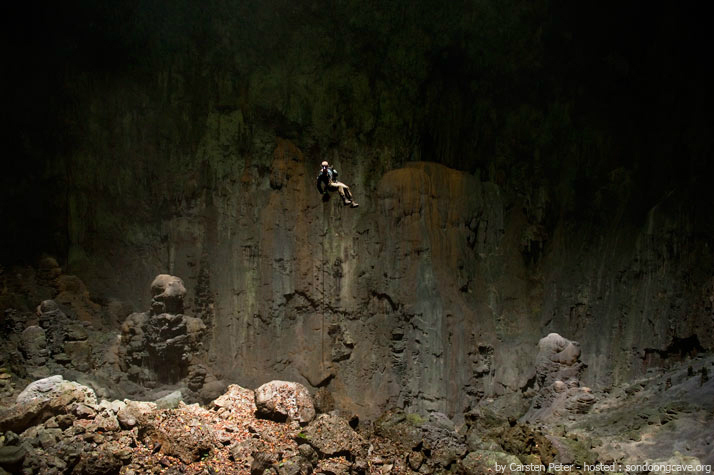 Fortunately, Shondong Cave is open for tours, of course, if you’re willing to make the one-and-a-half day trip to get to it and then rappel down the cliff. And that’s just the beginning. 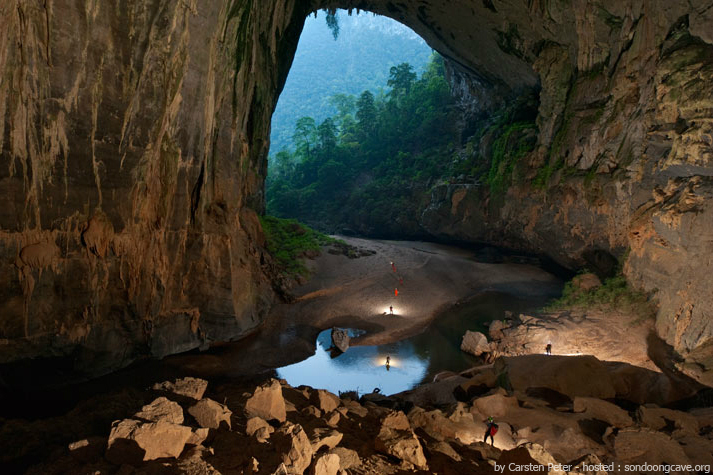 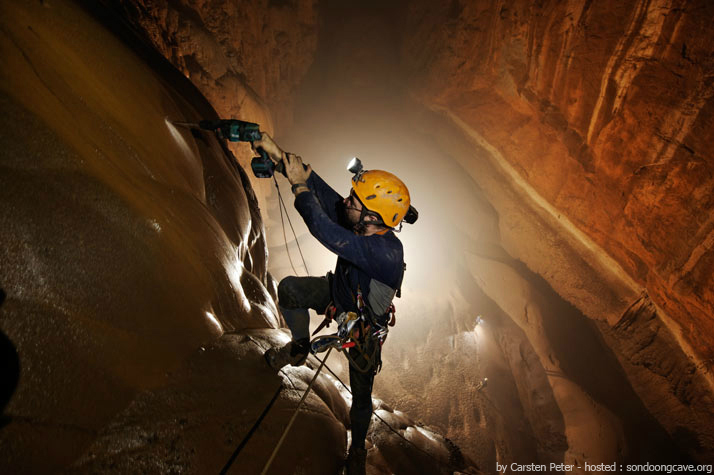 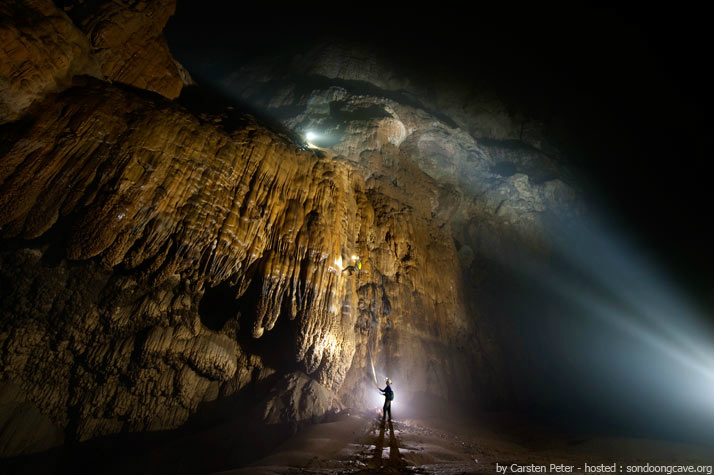 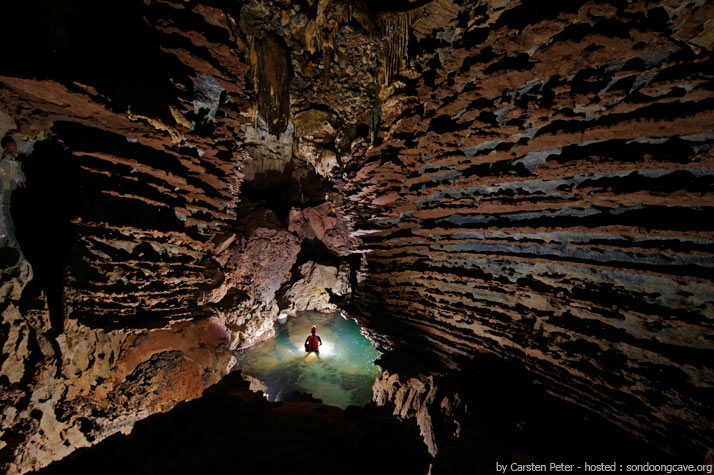 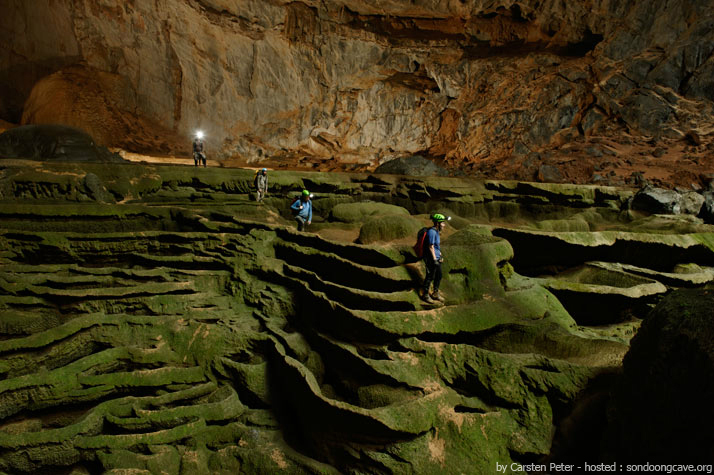 The cave was formed about 2,000 to 5,000,000 years ago by river water eroding the limestone under the mountain. Getting to the cave entrance is a feat in itself. Shondong consists of a labyrinth and no fewer than 150 individual caves. 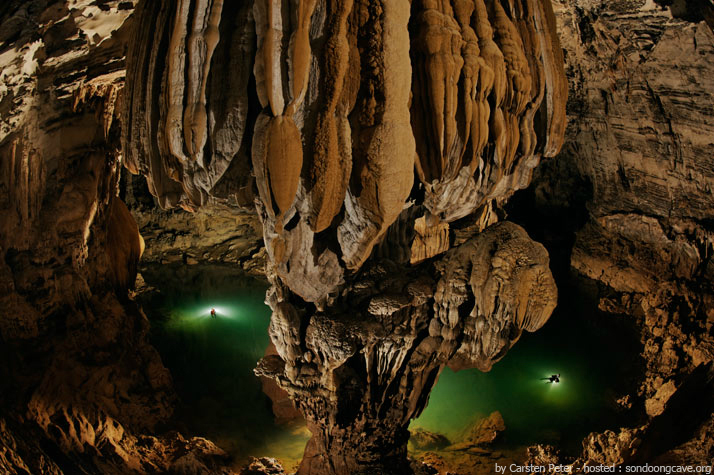 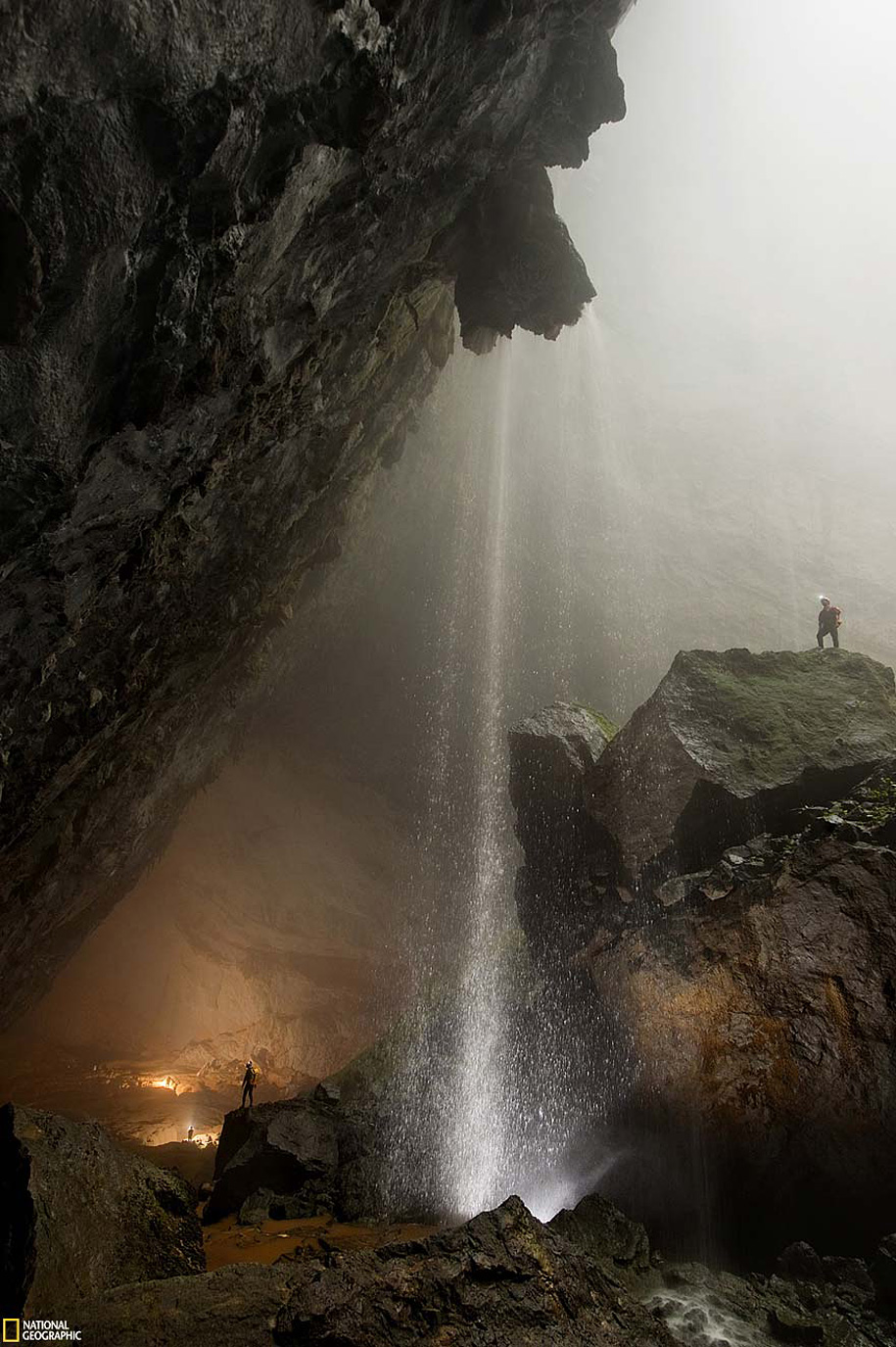 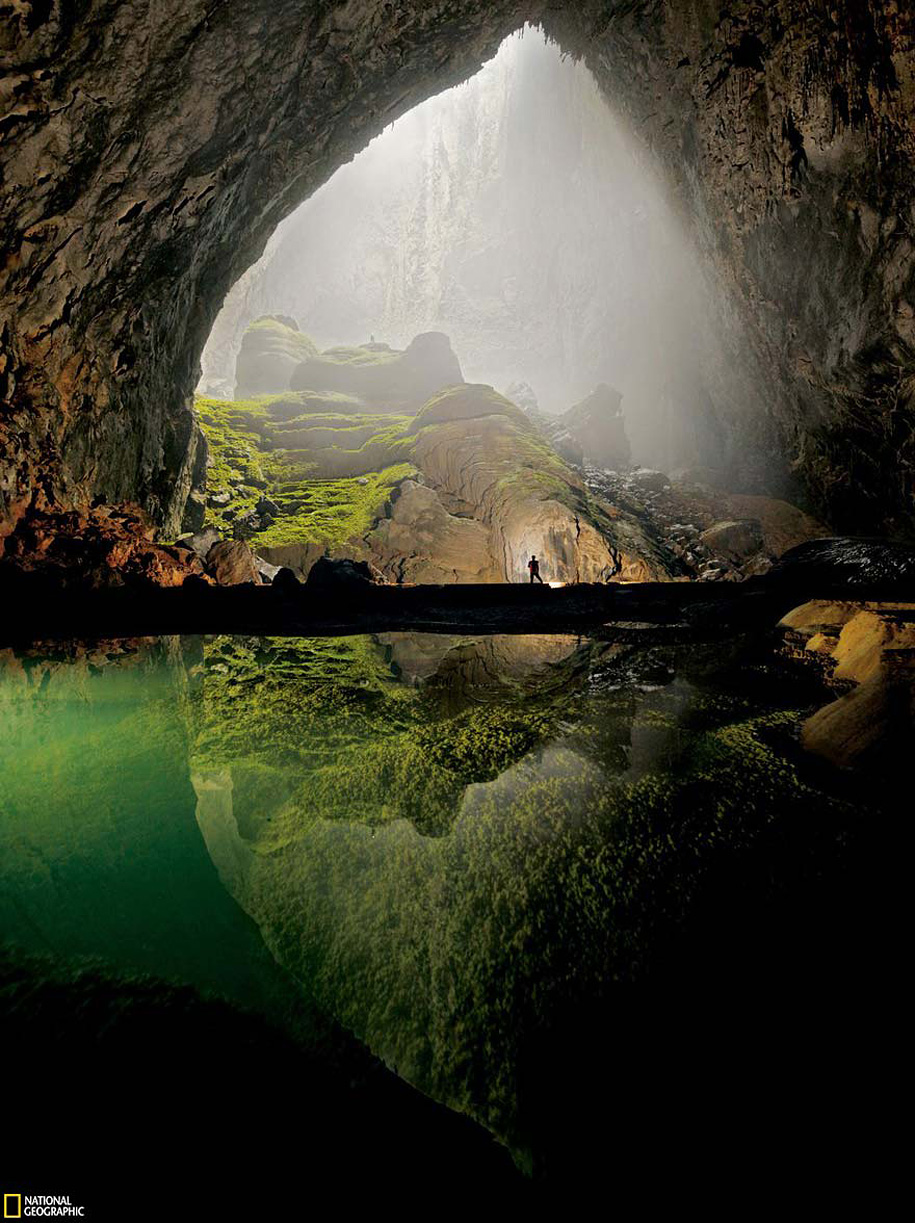 The river flowing through here has its own lakes, and even a jungle. The incredible cave has been made available to the general public for a fee through the tour company Oxalis. The company offers a six-day trip for visitors, but it is certainly not for timid tourists. The hike into the cave takes a day and a half through dense jungle thickets. Then there is a 260-foot descent down to the entrance. This is a trip that adventurous hikers will enjoy.