Shilin Stone Forest is located in Yunnan province, China, 130 km southeast of Kunming. It is protected by UNESCO. It is considered one of the main attractions of China. Hundreds of thousands of tourists from all over the world come to admire the unearthly beauty of stone giants surrounded by water and greenery. For the Chinese, the forest is the first wonder of the world.

The locals have a beautiful legend connected with the appearance of the stone forest. It is passed down from generation to generation for hundreds of years. According to the legend, there once lived a huge hero in these places. He decided to build a dam for his people. He turned to a magician for help. He gave him magic tools with which he could easily work the stone. The bogatyr began to work at night, carrying huge blocks to the place of work with ease. But the magician did not tell the bogatyr that the tools would lose their magic power at sunrise. The bogatyr brought many stones but could not work them as the sun came up. These stones were left untreated, scattered all over the valley. But it is only a legend.

The scientists have their own version. The age of the majestic forest of stone is about 300 million years old. This forest was once the bottom of the sea. Nothing can create such beauty like the elements and nature. Sea waters and earthquakes did a glorious job on its topography, creating bizarrely shaped cliffs, gorges, and labyrinths. Later, the sea dried up. The sun, wind and time finished their work and presented to man the stone creations, perfect in their beauty. If you look closely, you can see not only rocks in the stone mazes, but also fancifully shaped buildings, people, fantastic mushrooms and plants, strange animals and mystical creatures. 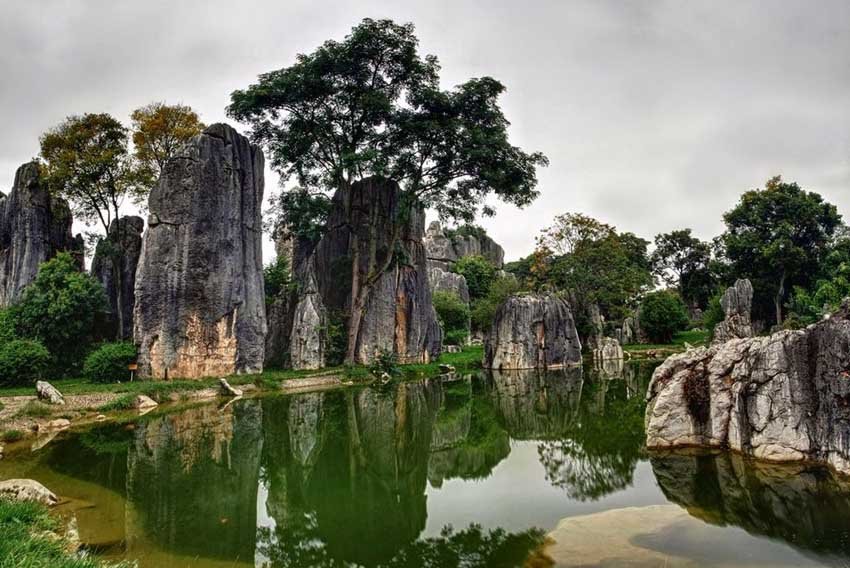 At the entrance to the forest is a beautiful lake. Walking along the eastern shore of the lake a little higher, through a maze of large and small towers of stone, you can come out to a stone formation that looks like a lion. Next to it is a body of water, which is called the Lion’s Pond.

In the center of the Big Stone Forest is built viewing pavilion. It is not easy to get to it, but it is worth it. The view that opens from it is so stunningly beautiful that it is impossible to convey in words.

In the Little Stone Forest are the “Towers supporting the sky” and the “Singing Stones”. Around the different in shape, but very tall stone blocks, stretches a carpet of luxurious greenery. Floral meadows alternate with thickets of bamboo and flowering trees. It seems that the greenery breathed life into these cold and soulless stones, and you get the feeling that you are in a magical land, and stone giants, most likely, will talk.

Among the stone giants loops the Ba River, which forms a rushing stream, plunging down from a height of 90 meters. This waterfall is called Dade. During the rainy season, it splits into several streams and thus becomes especially picturesque. There are poems carved in hieroglyphics on the rocks nearby. 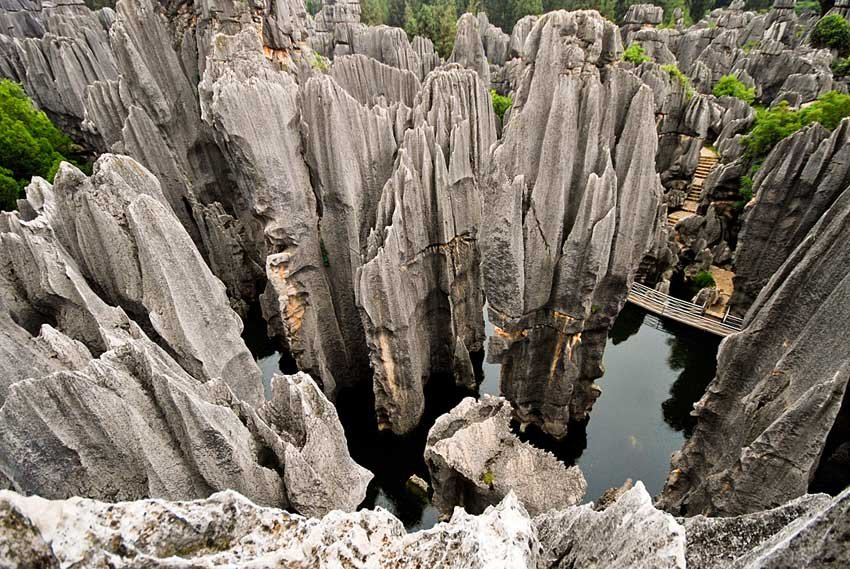 Another attraction of the stone forest is Lake Changhu, rare in its beauty, oblong in shape. It is 3 km long and only 300 m wide. It is a karst lake. The water in the lake are preserved stalactites and stalagmites. In the middle of the reservoir there is an island of sandstone. 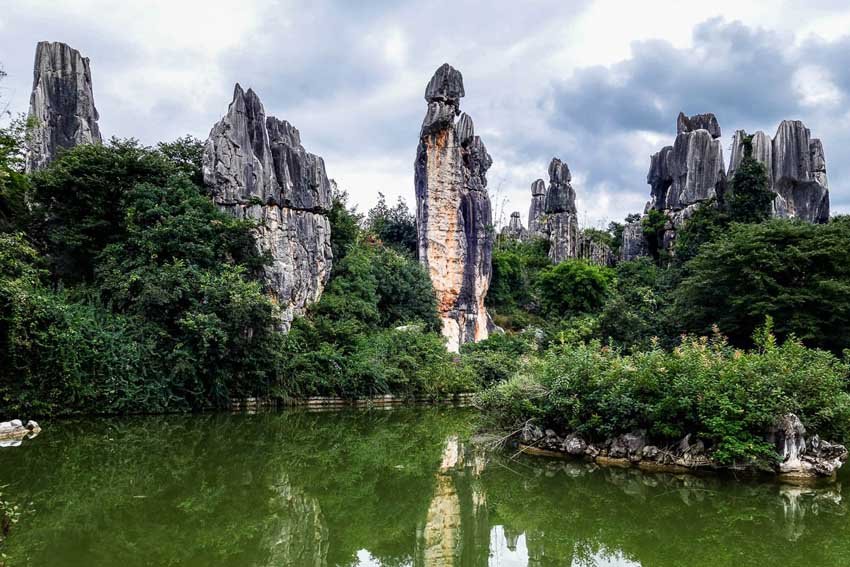 But not only above the ground grows a wonderful forest of stone. There is one under the ground as well. In the labyrinths of the Zhiyun cave one can find the same wonderful figures made of stone. The cave is of karstic origin, its area is 3 square kilometers.

READ
For those who are on the road: how to find a traveling companion and do not get into trouble?

The name of the second cave means “The Cave of Mysterious Wind”. It consists of Pengfeng Cave, Hongxi Spring, and an underground river. From August to November, every half hour, a real whirlwind rises from the depths of the river. It slips over the surface of the body of water and subsides in 2-3 minutes, just as suddenly as it began. The mystery of this phenomenon has not yet been solved.

The area around the forest is home to the Sami people. This people speak six dialects and have their own writing system. Back in the early 20th century, the Sami had a feudal system. Until now, in some places shamanism is widespread and various rituals are conducted. They are also famous for their embroidery, which they are happy to sell to tourists. Many work as guides and guides, showing travelers the most interesting places in the stone forest. In the evening you can watch the dance contests, which are arranged by the people themselves in the amphitheater of the Small Stone Forest.

Every year, on July 23-25, Shilin welcomes visitors from all over the world. On these days, the famous “Festival of the Torches” is held here. Guests of the festival, along with local residents, take part in activities such as wrestling, bullfighting, dragon play, lion dance, and more. The culmination of the holiday is the torch festival.

Having been here once, tourists return again and again. There is not enough time to see everything in one trip.

Shilin – the famous stone forest in China (in the original Shilin Stone Forest). It is more than 400 km of 2 karst formations of bizarre shapes. The stone pillars look like ancient frozen tree trunks. Shilin Stone Forest has been known since the 14th century. Then it was called the “first wonder of the world”. 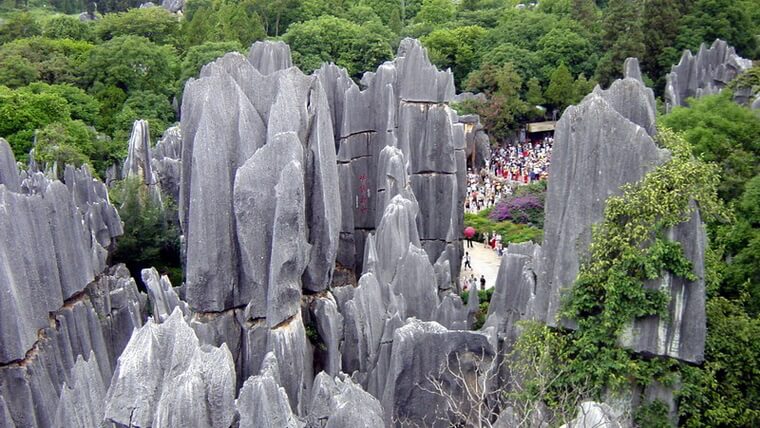 The Shilin Stone Forest is located in Shilin Yi County in Yunnan Province in southern China. The nearest large city is Kunming 120 km to the west. 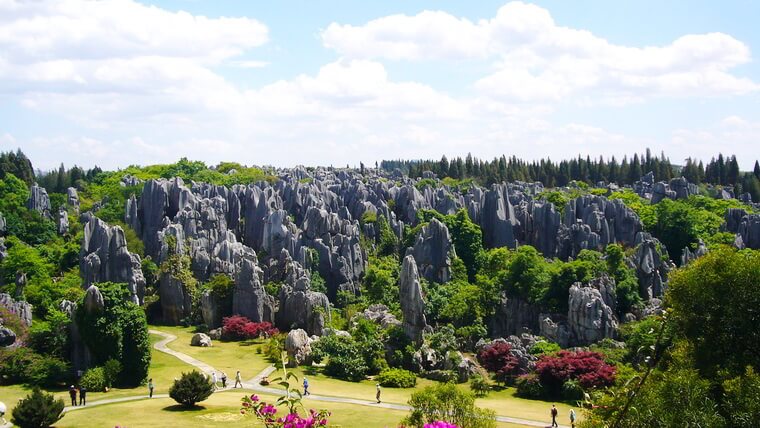 What is the Shilin Stone Forest?

First of all it is a unique geological phenomenon. It is a vast area covered with incredible stone formations. Sometimes they reach a height of 40 meters.

Looking at this miracle of nature, it seems that the stone formations grow right out of the ground. Many of them look like animals, birds and even people. 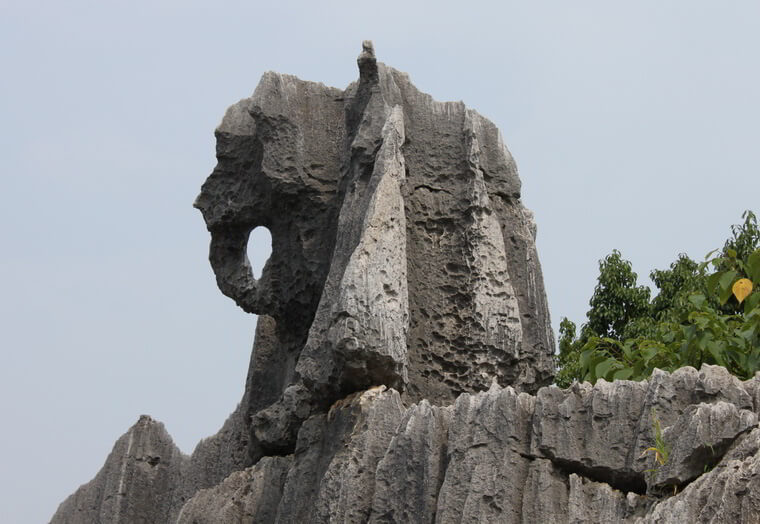 In particular, this formation looks very much like an elephant, of course.

Similar formations can be seen on the island of Madagascar. This is the Cinji De Bemaraha National Park or simply the Stone Forest of Madagascar.

But Shilin is not just rocks. In addition to the stone peaks there are caves and grottoes, woodlands and meadows, waterfalls and lakes. It is a whole complex of amazing attractions. Since 2007, two separate sites (the Naigu Stone Forest and the village of Suogei) have been included in the UNESCO World Heritage lists.

Interesting fact – Locals say that if you came to Kunming and haven’t seen the Shilin Stone Forest, you’ve wasted your time. 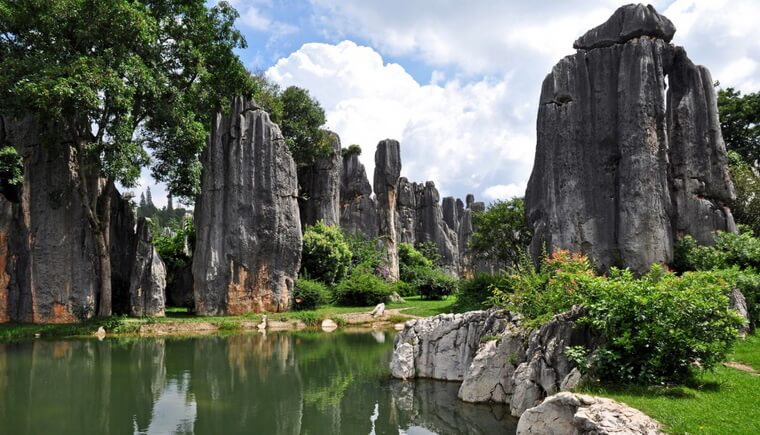 Geological features of the Shilin Forest

Scientists believe that the Stone Forest began to form 270 million years ago. At that time there was a shallow sea here. Later it shallowed as a result of tectonic processes.

Natural geological processes and water erosion carved the amazing shapes we see today. Geologists claim that the Stone Forest is a classic example of karst formations. 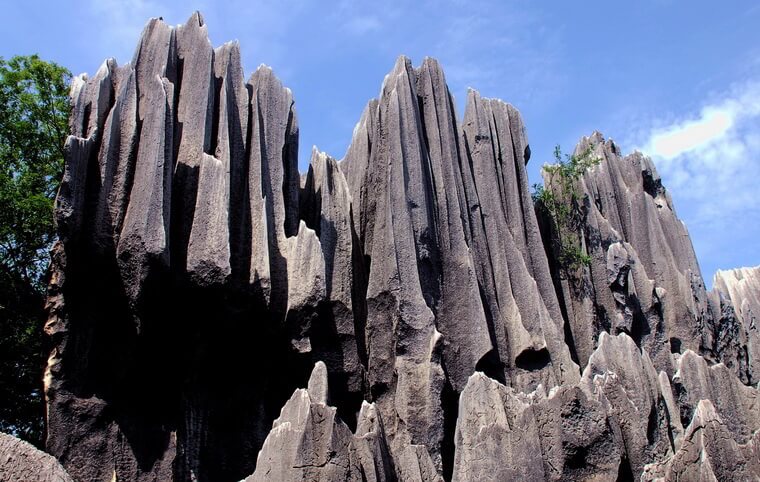 Attractions of the Shilin Stone Forest

It is accepted to distinguish 7 main zones of the Shilin forest.

According to legend, there was a beautiful girl from the Yi tribe who lived here. Her name was Ashima. She fell in love with a handsome young man and was strictly forbidden to marry him. In despair, the beauty ran away into the forest and turned into a stone pillar. That stone pillar now bears her name.

According to another version, they wanted Ashima to marry someone she did not love. That’s when she decided to run away with her true fiancé. On the day of her escape, there was a great flood and Ashima drowned, never betraying her true love. 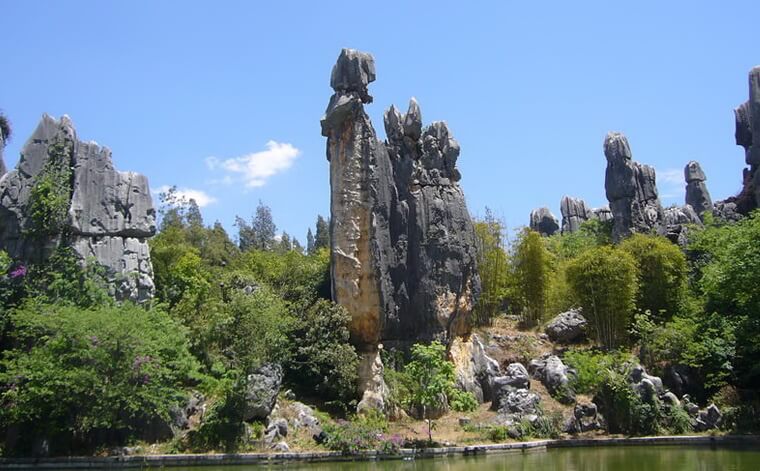 The Yi people have passed down these legends by word of mouth for thousands of years. Every year on the 24th day of the sixth lunar month, the Yi people celebrate their national torch festival. The festival includes folk dances and performances, wrestling and rock climbing competitions. The festival ends at night and the stone maze literally comes to life. Hundreds of people light torches and take a winding route through the stone forest. In doing so, they symbolize the fire-breathing dragon.

Today, Shilin Forest is a popular tourist destination in the region. It has all the necessary infrastructure for pleasant walks. There are information boards everywhere. The paths are fully equipped, there are benches. 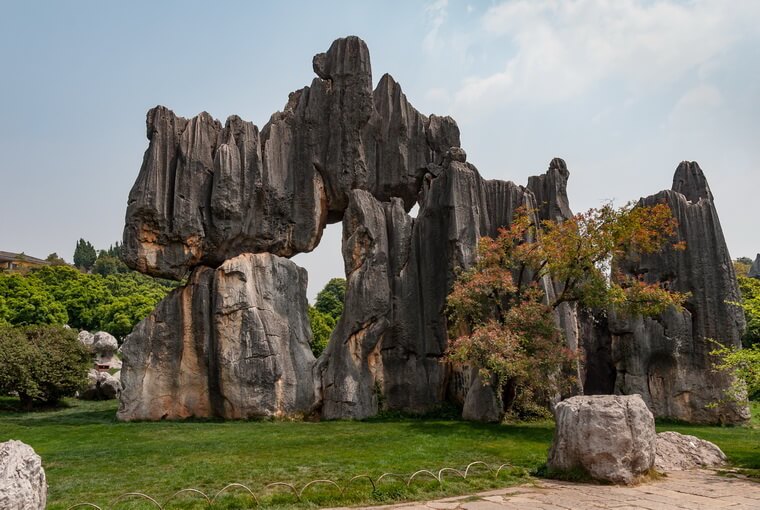 The easiest way to get to the stone forest from Kunming is by bus in a couple of hours. They run daily all year round. Almost all routes pass by the main entrance to the park. Keep in mind, bus route No164 stops 2 km from the park entrance.

There is a special bus route from Kunming Airport to the stone forest. Buses leave every hour.

You can also take a train. There are trains to Shilin from Kunming Central Station every day. The travel time is about an hour and a half.