The Treasure Cave. The story of teenagers who dreamed of finding a treasure, but instead made one of the greatest discoveries

Exactly 81 years ago – September 12, 1940 – the eyes of four French schoolchildren appeared majestic and numerous paintings on the ceiling and walls of the cave in a limestone hill. The debate as to who, when, and for what purpose painted Lascaux, does not cease until now. “Lenta.ru” shows and tells the story of the cave, forgotten, rediscovered and nearly destroyed by man. 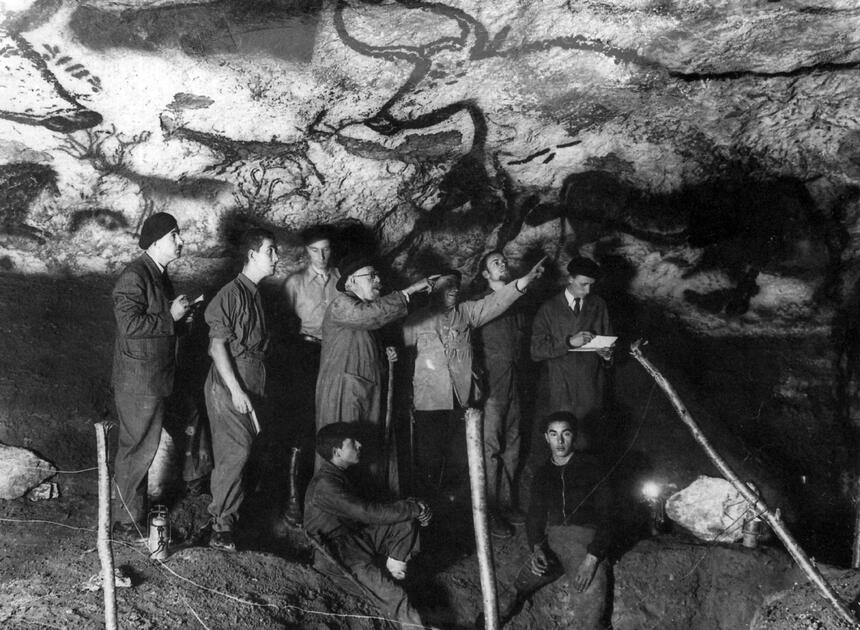 On September 12, 1940, four schoolboys from the village of Montignac in the Dordogne – Marcel Ravida, Jacques Marsal, Georges Agnès and Simon Concace – decided to impress the visiting female peers whose families had fled to southern France from German-occupied Lorraine and to find the secret treasure of the Perigord Counts. The fact is that four days earlier, the dog of the eldest of them, 17-year-old Marcel, in pursuit of a rabbit, had discovered a ravine that, judging by the sound of stones being thrown, communicated with some underground space. Next to a pine tree that had fallen from a lightning strike, the schoolchildren found a narrow opening. It turned out to be a long and widening hole to a large cave, on the walls of which the guys saw by the light of a flashlight a lot of pictures of animals. They kept their discovery a secret for exactly one day, after which they reported the mysterious cave to their old teacher, Henri Laval. The latter contacted the only expert he knew on the history of primitive society, Abbé Henri Brey, who was hiding from the Nazis in the area. On September 21, Brey himself visited the cave with a number of other explorers – and was so impressed that he named it the “Sistine Chapel of the Perigord. 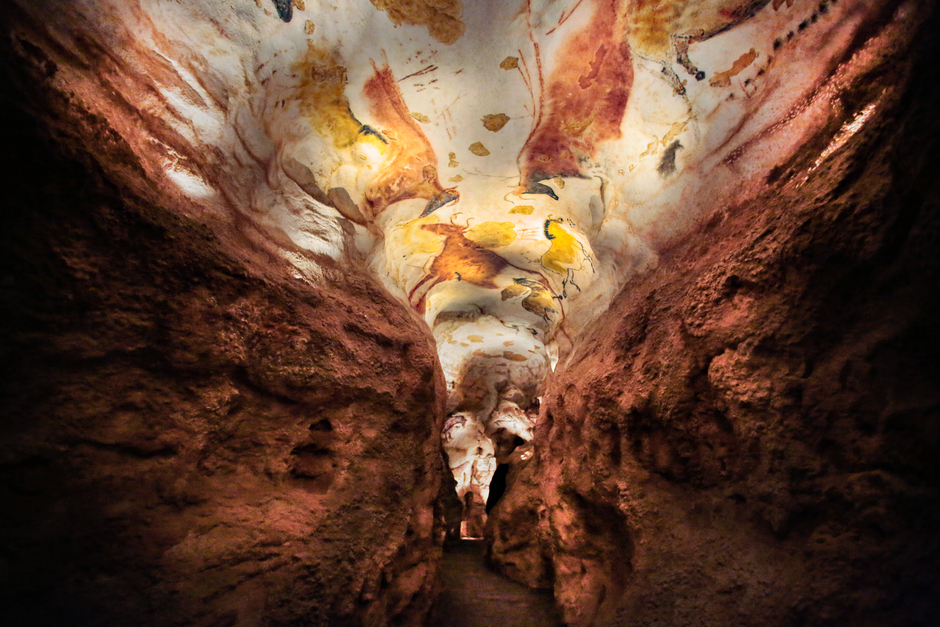 On December 27, 1940, Lascaux Cave was already declared a historic site. The study of the cave, however, did not begin until the end of the Second World War. In 1948, Lascaux Cave was opened to the public. In 1949, Brey, together with Séverin Blanc and Maurice Burgon, began detailed excavations of the cave. In 1952, he handed over the leadership of the excavations to another, much younger abbot, André Glory. From 1952 to 1963, at the request of the researcher, he captured more than 120 square meters of drawings. According to Glori’s calculations, 1,433 images were made (today the inventory lists 1,900 titles). Work on the study of cave paintings continues to this day. 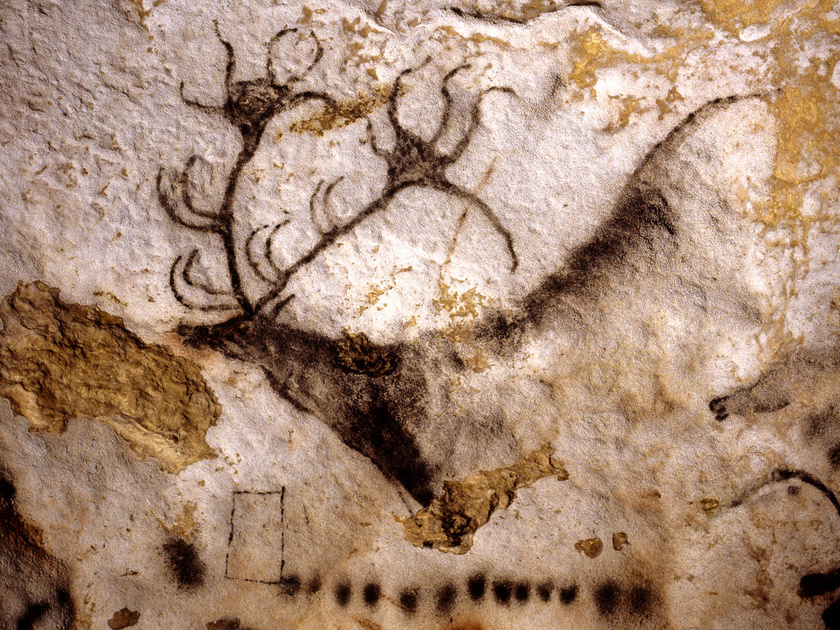 Deer painting, “hall of the bulls”.

The Lascaux Cave is a complex of rooms on different levels and the passages between them. They have the names that Henri Breuil gave them during his first surveys of the site. From the “Hall of the Bulls” one can enter the “axial passage” and the “passageway”. Behind the former is the “nave,” from which one can enter the “cat’s hole. At the junction of the “nave” and the “axial passage” is the “apse”, a circular hall from which one can descend into the “shaft”. 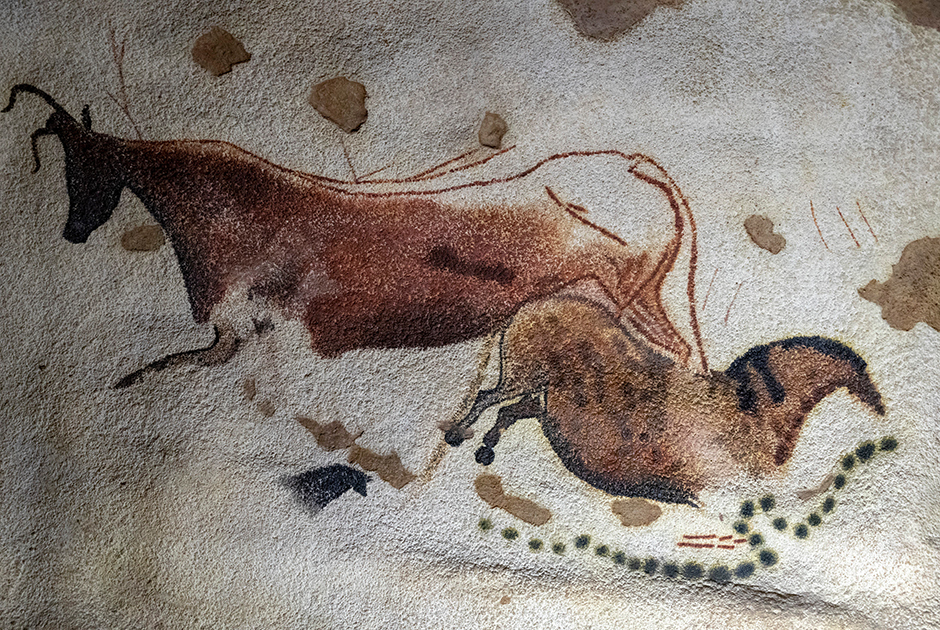 The cow (or tour) and the horse. “Axial passageway.”

More than two thousand rock paintings have been discovered throughout the work. Among the drawings there are monochrome and color. Most of all the images of animals: bears, horses, bison, bulls, deer – including full-length ones. Paint was applied to the images in two ways: by spraying through a special tube and with a brush. Some of the animal outlines were engraved with arrowheads. The black dyes corresponded to manganese oxide, while the yellow, orange and red ones to iron oxide.

READ
Getting around Verona, Italy 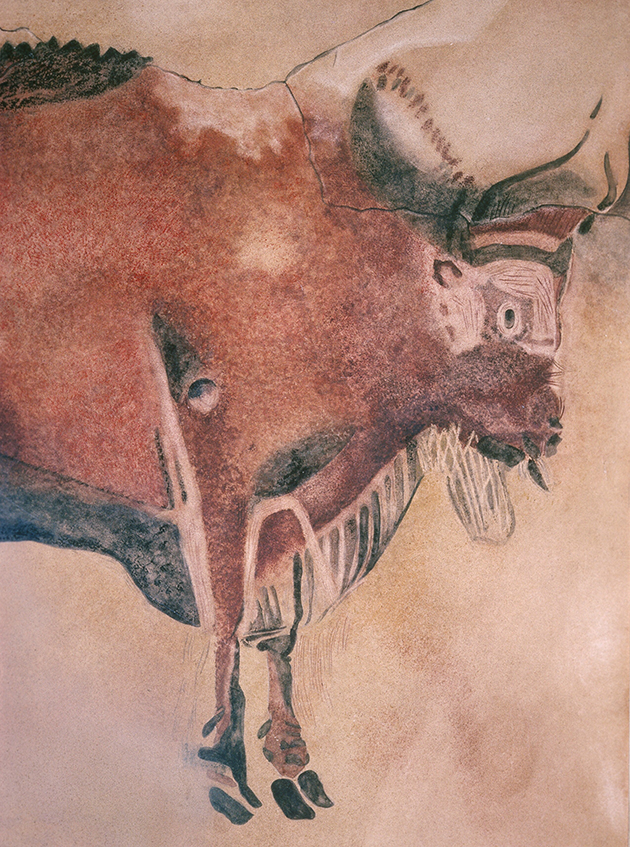 The Lascaux Cave rock art was one of the first objects to be dated using radiocarbon dating – measuring the content of radioactive carbon-14 in the material. The discoverer of the method Willard Libby – a future Nobel Prize winner – proved the age of the rock art is 15.5 thousand years according to the charcoal found during excavations in the lamps from the “mine”. These and slightly later dating of Glori’s findings allowed us to attribute the drawings of Lascaux Cave to the Madlena culture. However, radiocarbon analysis and mass spectrometry made in 1998, fragment of a wooden stick from the “mine” showed that the cave was frequently visited in the era of Solutrean culture – the age of the find was 18.6 thousand years. The most recent dating of deer bone tools found in the cave, carried out in 2018-2020, showed that in fact the drawings in Lascaux Cave were made 21-21,500 years ago, during a transitional period at the junction of the Badegul and Madeleine cultures. 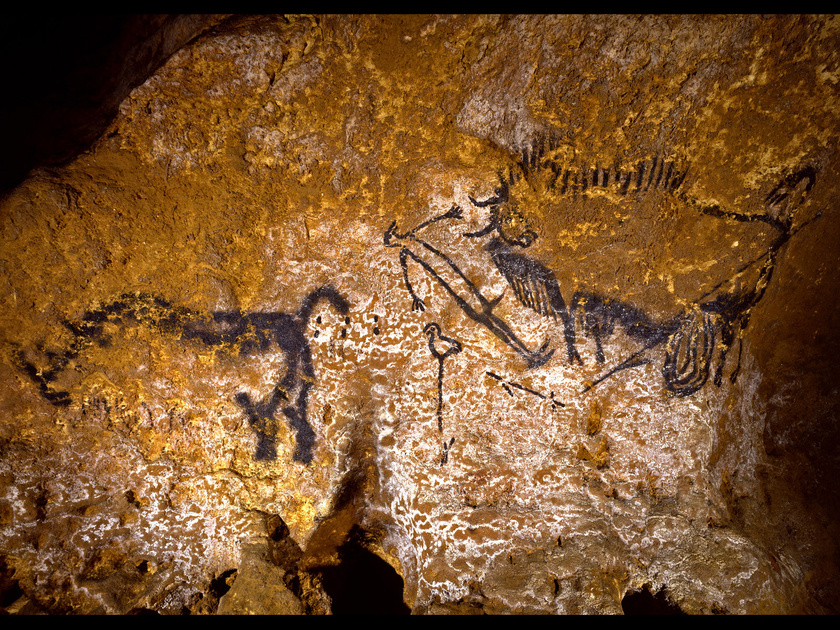 Man and Rhinoceros. “Mine.”

One of Lascaux’s most enigmatic scenes is in the “mine”: a man with a bird’s head “falls” between a bison and a rhinoceros. An elongated object topped with a bird figure is depicted next to it. According to archaeologist and anthropologist André Leroy-Gurand, the scene is a reference to an ancient unknown myth. 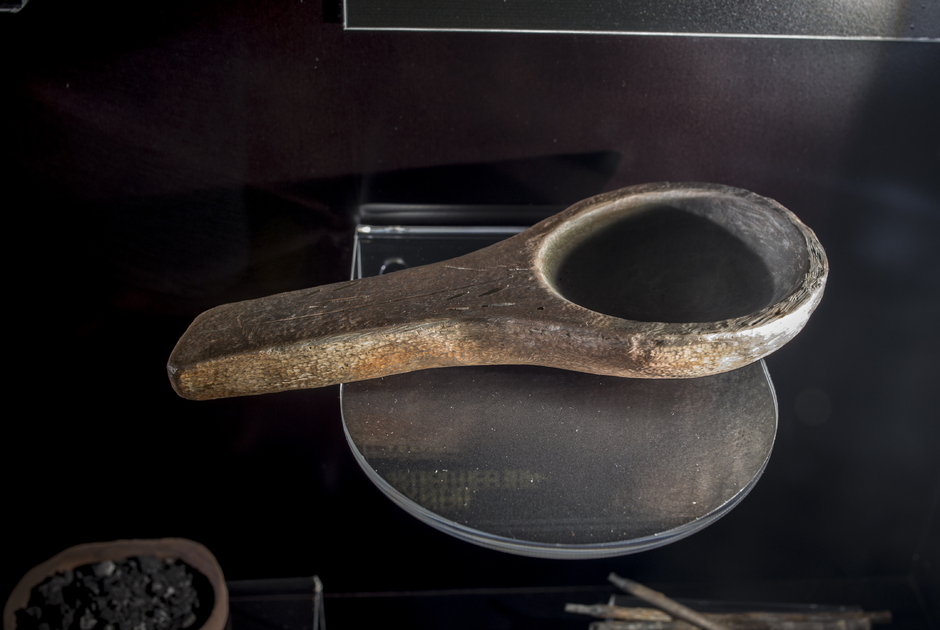 Luminaire from the Lascaux Cave. Museum of National Archaeology, Saint-Germain-en-Laye

One of the most famous objects found in the cave is the luminary discovered by André Glory in the “mine” in July 1960, called a “roaster” to distinguish it from other objects. Traces of polishing are still visible in the recess. The notches on the handle may indicate stylized horns and ears of an animal, as suggested by Bray, or a spear, a hypothesis advanced by Glory. 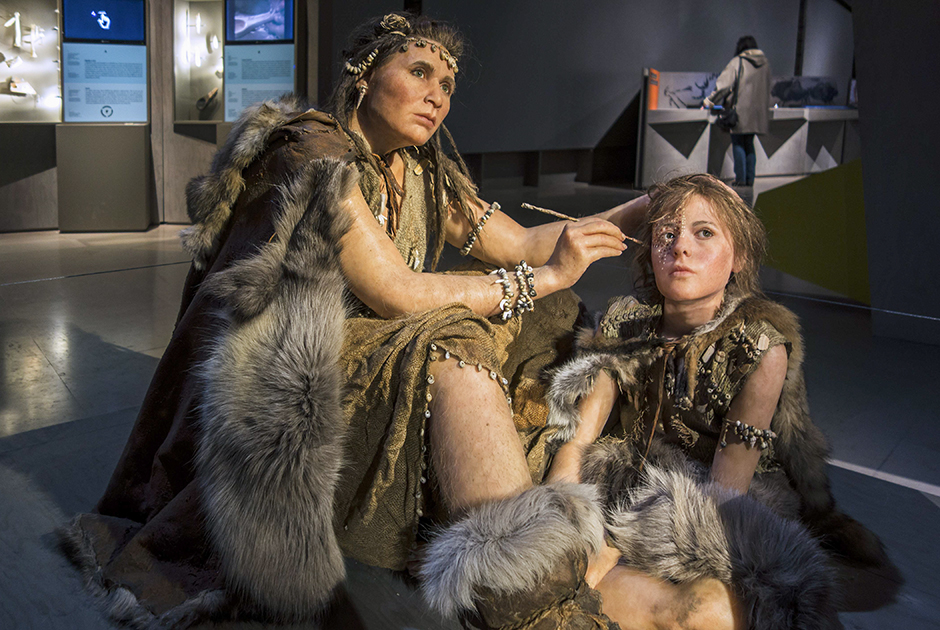 Reconstruction of a Cro-Magnon woman and her child. Lascaux Museum

The small number of tools found in the cave allowed researchers to suggest that Lascaux Cave was not a place of residence, but a sanctuary for ancient people. 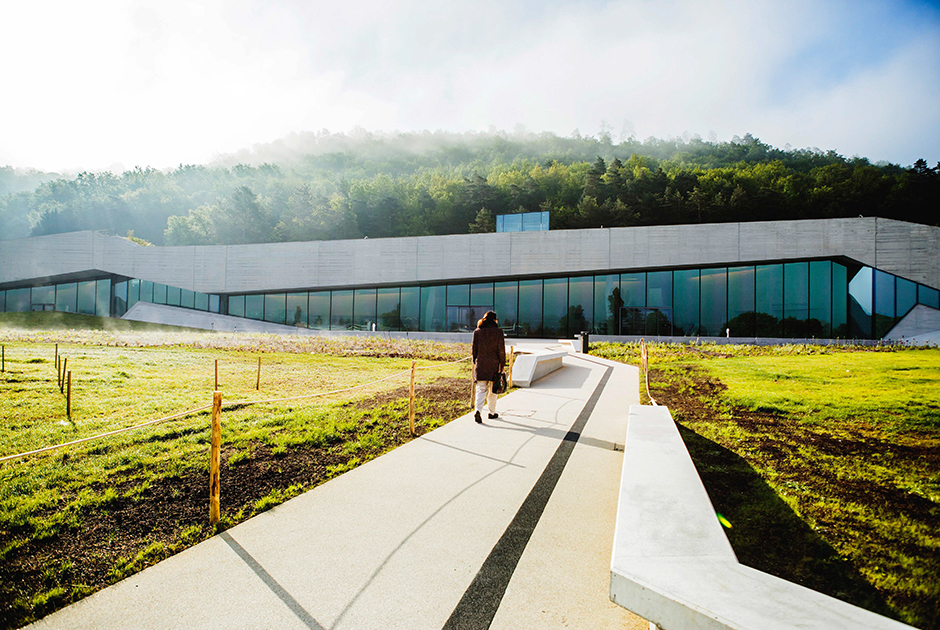 Entrance to the International Center for Rock Art (Lascaux 4)

The cave immediately became a popular place for the public – and this had an immediate effect on its condition. In 1955, scientists discovered the first signs of damage to the images, which turned out to be caused by carbon dioxide from tourists’ breathing: it reacted with the glassy crust of calcium salts that served as the “varnish” for the images, resulting in calcium hydrogen carbonate, which corroded the drawings. The ventilation system installed afterwards – which required deepening the cave by five meters – did not help as the number of tourists in the cave reached thousands per day. In 1960, the cave became “green disease” – algae began to spread on the walls of Lascaux. Then it was replaced by the “white disease” – settling of the calcite cover. In 1963, French Minister of Culture André Malraux imposed a ban on access to Lascaux by the general public. By 1967, normal air circulation for the cave was restored. Now only some scientists and artists have access to Lascaux itself. 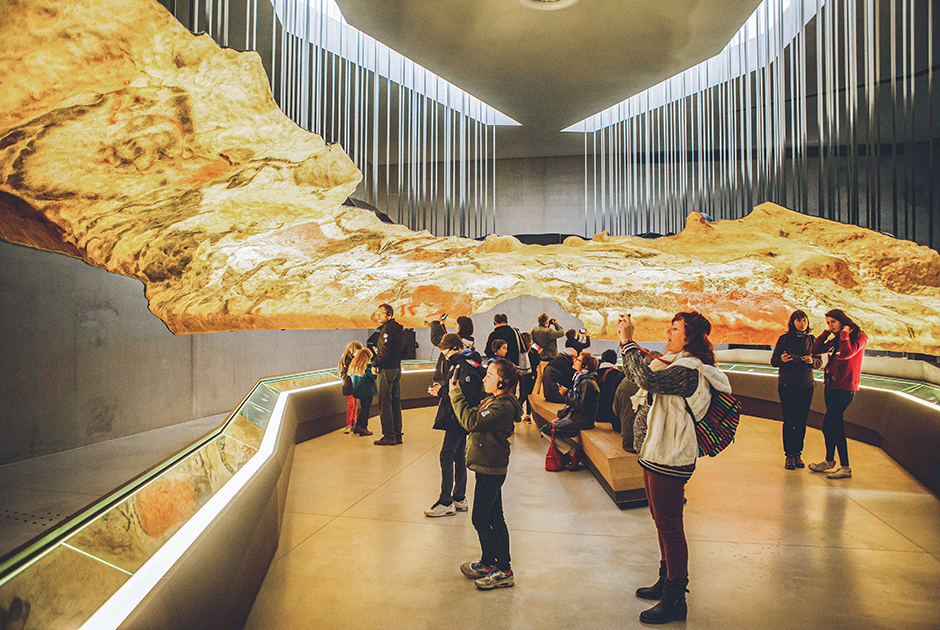 In 1979 the Lascaux Cave was included in the list of UNESCO World Heritage Sites along with other prehistoric sites and caves with rock paintings in the Weser Valley. In order to keep the flow of tourists going, the society that owns Lascaux – among whose members was the de Larochefoucauld family, distant relatives of the famous writer – decided to create a replica of the cave. For this purpose, the French National Geographic Institute carried out a stereo-photogrammetric survey of all the paintings. The project was expensive – it required selling the real cave to the state. And a concrete copy of part of the cave, in particular the “axial passage” and the “hall of the bulls” – Lascaux 2 – was not opened until 1983. A full replica of the complex – where even the temperature and lighting of the cave are simulated – became available to visitors only in 2016 with the opening of the International Rock Art Center (also known as Lascaux 4), which cost 57 million euros to build. By July 2019, more than a million tourists had visited it.