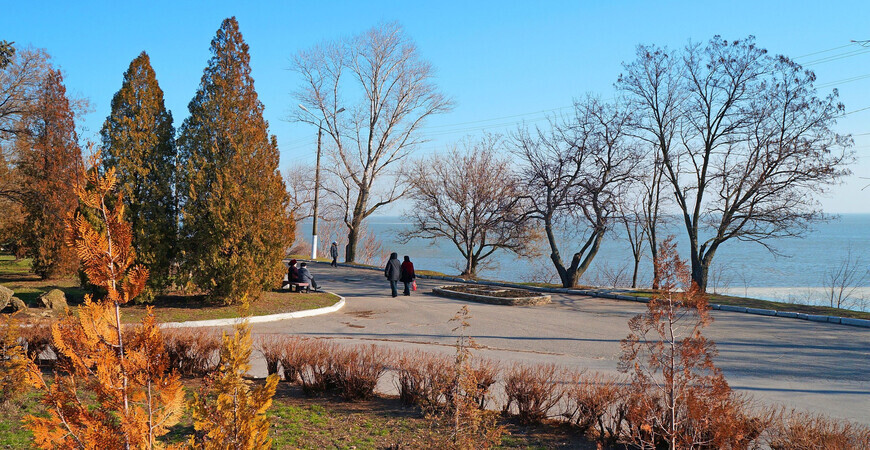 Seaside Park is one of the most beautiful and definitely the greenest recreation place in Taganrog. The park was laid out in the early 1960s on the site of a waste quarry of a brick factory. The territory was characterized by very uncomfortable terrain and proximity to groundwater, so that it was impossible to build houses. Development of the park went by Taganrog enterprises. Particularly great contribution was made by the Combine Plant and the Dimitrov Plant.

It is believed that the first decided to equip the park in this place still by Emperor Alexander I. In 1818 he visited Taganrog and liked the panorama on the western slope of the cape. In 1825 the emperor suggested to make a garden here. Being a great lover of garden art, Alexander himself drew up a plan of the garden. The park had an area of more than two hectares, there were over two thousand trees. The park was named after the wife of the emperor – Elizabeth. After the revolution, the Seaside Park fell into disrepair.

The park returned from oblivion in Soviet times. In June 1966 it was opened officially. At that time over 600 trees were already planted, and there were different amusements. The park was actively developing. By the end of the 70’s there were almost 3000 trees, including conifers, about 7000 bushes and a thousand rose bushes. Art groups and orchestra played in the park.

Today the Seaside Park in Taganrog remains a favorite place for recreation of citizens. It is equipped with a children’s playground, amusements, there is a dance floor. In summer, the park organizes open-air cinema screenings. There are also several cafes in the park.

The Seaside Park in Taganrog is carefully cared for, so its condition is pleasing to the eye. Recently there was a large-scale reconstruction. Signs and sidewalks were updated, new benches and shopping pavilions appeared, the number of attractions increased. Adults and young visitors of the park will find something to ride – a Ferris wheel, a merry-go-round or a steam train. In total there are 11 amusements at the park at this time.

READ
When to go to Sofia, Bulgaria: climate, best times and tips

Also in the Seaside Park was equipped with a large sports ground. Here you can train on outdoor machines, play soccer and basketball. On the territory of the park works equestrian club. So you can walk in the Seaside Park not only on foot, but also on horseback. At the highest bank of the park is equipped with an observation deck. There is a gorgeous view of the Taganrog Bay and the Azov Sea.

In 2015, the park was equipped with an alley of anchors. It includes a monument “Border guards of all generations”, consisting of a sea anchor and a border pole. Another six anchors were raised from the bottom of the Azov Sea and exhibited in the park.

The main artery of the park is the central alley. It offers a stunning view of the water expanses. Sea air, birds’ singing and the shade of trees make walking here especially pleasant and healthy. The alley is decorated with beautiful flowerbeds. The most gorgeous one is in the center. It pleases visitors not only with bright floral arrangements, but with a light fountain. At the entrance to the park, guests are greeted by a mermaid – the symbol of Seaside Park in Taganrog.

In their reviews of Seaside Park, visitors especially note that it is not crowded and comfortable, and the air is clean. Residents of the city call Primorsky Park the most well-appointed in Taganrog.

On the coast of the park you can go down a stone staircase. Here is equipped with comfortable sandy beach. The sea is shallow, so Primorsky beach is suitable for recreation with children. The recreation zone has all necessary equipment – umbrellas, locker rooms, showers, deck chairs and toilets.

Fans of active recreation can take a few lessons of windsurfing – there is a school that teaches this beautiful sport. We can say that Primorsky Beach has the most suitable location. Rest by the water here can be combined with a pleasant walk through the green park.

READ
Culture and attractions of the Philippines

Near the beach there is a bike park. Since the park was created on the site of a former quarry, its relief has a lot of ascents and descents. If you’re going for a ride, make sure you have comfortable footwear.

If you prefer to drive your own car, there is a small free parking lot at the park entrance.

You can also get to the Seaside Park in Taganrog by cab. Call the nearest car with the help of Yandex. You may also use Yandex.taksi, Gett and Uber.

Seaside Park – a beautiful square in the south of Taganrog

When we talk about the Northern Azov region, in connection with historical events, we remember Azov, and with the refinements of improvement, as a rule, we associate Taganrog. Seaside Park of the last city is the main reason for that, because it is almost 20 hectares of different plantings, the central staircase to the beach, an area of entertainment and mini-trade, monuments, benches and small forms of architecture. Landscape designers update the landmark with their stone and floral masterpieces. 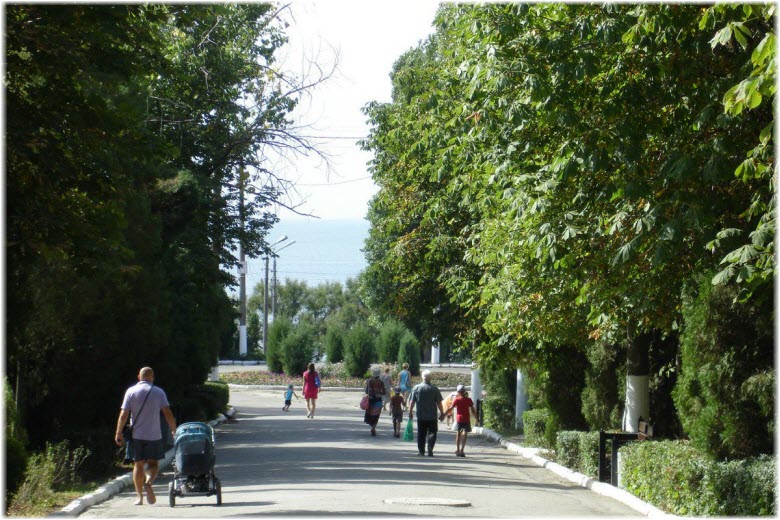 Where is Seaside Park on the map

It is located on the west side of the seaside community – between its airport and downtown neighborhoods. Nearby are the West Beach and Municipal Hospital #1. Nearby you will also see several cafes and restaurants – “Mermaid”, “Traktir Melnitsa” and “Breeze”.

A large park was laid out here in the 1960s – on a building material quarry located near a brick factory. In the 1950s, the excavation had already closed. In its place an area was formed with quite an inconvenient relief, and the proximity of groundwater had an extremely adverse effect on the design of residential buildings here.

So the leadership of Oktyabrsky district decided to lead the breakdown of the square. A special role in the landscaping belongs to the old team of the local combine plant (plant Dimitrov). 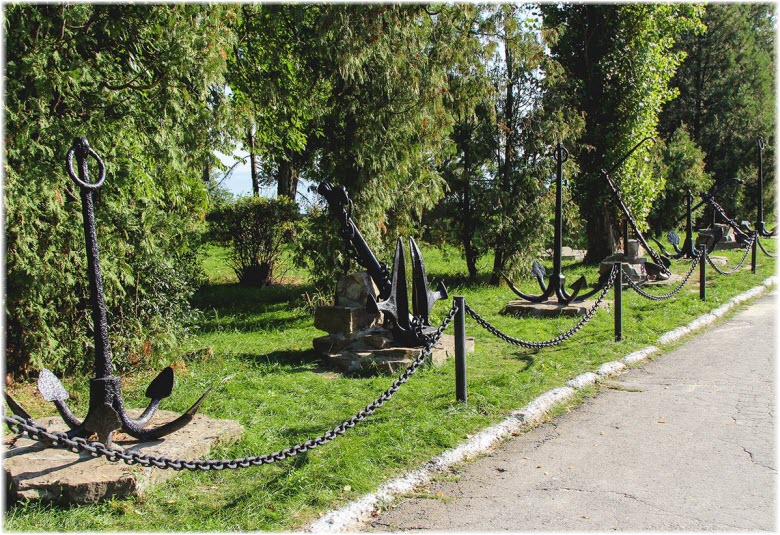 In 1965, there were already 633 plants. The first equipment in the amusement center was installed. That’s how the Primorsky Park of Culture and Leisure appeared. The opening ceremony was held in the early summer of 1966.

In 10 years, there were already 2,700 trees (500 of them were conifers). There were also about 7 thousand shrubs, more than a thousand rose bushes. Planting of decorative flora and flower beds actively continued at the resort in the following years. And on the dance veranda and children’s playgrounds there were held noisy cultural events.

In XXI century the Seaside Park went through the global reconstruction. In addition to the beautiful signposts and new sidewalks, “elegant” benches made of solid logs and stands selling sweets and drinks appeared. Many rides have been added. Anchor Alley opened in 2015.

Taganrog is rich in squares with monuments and monuments. Primorsky Park (urban green landscape of regular type and undulating relief) – one of the locations, confirming the glory of its thematic (“sea”) landscaping, because in the middle of tutoshnaya greenery is easy to find a mermaid and a lot of anchors.

A significant advantage of this place is a sandy (western) beach, equipped with recreational equipment (umbrellas, changing rooms and sun loungers), as well as breakwaters. Townspeople like to organize family picnics here. Stairs of stone stairs lead from the park to the shore. This combination of the park and the beach edge provides the best recreation for the visitors.

The complex in question occupies the area of more than 19 hectares. There are 11 attractions for children and adults (extreme). The main ones are:

READ
The 12 most beautiful ports of France

There is also a shooting gallery nearby. 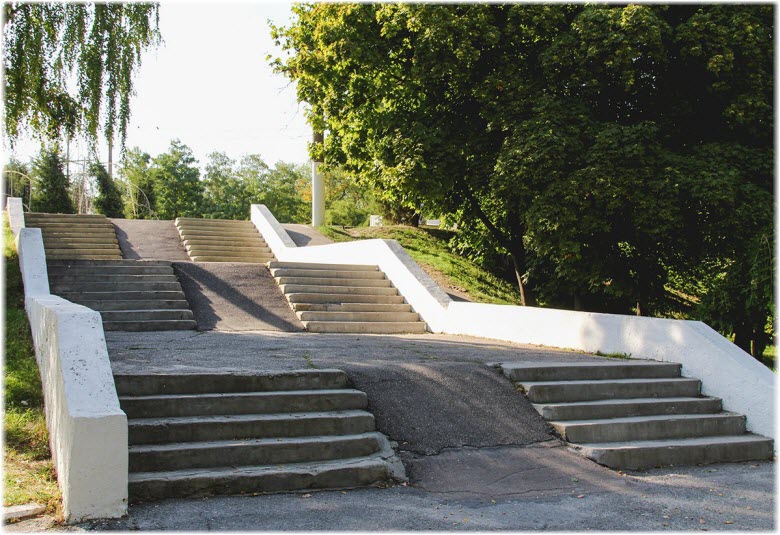 There is also a fenced dance floor. The park is maintained by 25 full-time employees. In the summer, the number of landscapers increases due to the hiring of seasonal workers. There is also an equestrian club on the grounds – adult horses are suitable for adults, and unhurried ponies for young riders. The main “artery” of recreation and entertainment zone is the Central alley. At the entrance you will be greeted by a mermaid (the original “symbol” of the park). People like to take pictures here.

There is also an “Alley of Anchors” – a special pride of the green point of the city tour. On it you can consider six anchor specimens of the era of Tsar Peter, raised from the bottom of the Taganrog Bay and other waters of the Azov Sea.

On all sides of the attractions is not difficult to find beautifully decorated “children’s corners. Since it itself lies on a high shore – in a convenient corner is equipped with an observation deck overlooking the sea.

To get to the park attractions, take buses and streetcars to the port or to Galytska. Take public transport to the stop “Kombinowy Kombinat”. Another stopping point opposite is “Brickyard”.

You can get here by yourself by car:

What can you say after looking at a lot of Internet photos? Seaside Park in Taganrog is an unusually beautiful and well-groomed place with a lot of small architectural forms. Here families meet, lovers walk, even business rendezvous are appointed in the local cafe “Breeze”. Reviews describe this corner as “heavenly”. It remains to add that the project, realized here, is part of the program “Comfortable Urban Environment”. Designers from various cities helped to implement it. In conclusion – a thematic video, watch it with pleasure!