The real story of the island from the Bounty commercials: Why this tropical paradise is considered cursed

Receive one top-read article in your inbox once a day. Join us on Facebook and VKontakte. Life on a tropical island for many seems a real paradise: clean sandy beach, palm trees, warm ocean and no worries. Roughly, as in the famous commercials for candy bars “Bounty. However, the realities of island life can be much more prosaic and nightmarish than even the most pessimistic ideas of ordinary people. As proof of this – the story of Pitcairn Island, which for more than 2 centuries has witnessed all the realities of the difficult life of people on a piece of land with an area of 4.5 square kilometers, lost in the Pacific.

Mutiny on the Bounty

Pitcairn Island’s “human” history began with the most famous ship mutiny in the British navy. In the fall of 1788, the British Navy’s three-masted sailing ship HMS Bounty arrived in Tahiti to load breadfruit seedlings. After wintering safely on the tropical island, the next spring, in 1789, the ship set sail for Jamaica with her cargo. Further events began to unfold clearly not according to the plan of the sailing captain. It is not known whether the reluctance to leave the island or the abuse of Captain William Bligh by his subordinates led some of the sailors, commanded by Christian Fletcher (Bligh’s first mate), to commandeer the ship shortly after sailing. The sailors who remained loyal to their captain with him were put out to the dinghy by the mutineers. They themselves went back to Tahiti.

Most of the mutineers wished to remain in Tahiti, but Fletcher and 9 other sailors decided to find a place where they could not be found by the British authorities. As a result, the choice of the new captain of the HMS Bounty fell on the island of Pitcairn discovered by people only 20 years ago. Along with Christian Fletcher and his sailors, 19 Tahitians-six men, twelve women, and a little girl-came aboard the Bounty to the salvageable island. After taking everything they needed from the ship to live on the island, the new colonists burned the sailboat, voluntarily cutting off their way to the “mainland.

Palm Root Rum and the Decisive Word of Women

For a few years Pitcairn was a paradise for its new inhabitants. In 1793, however, there was conflict in the small community. It was caused by a shortage of women. Tahitian men killed five of the nine white sailors. And then the unbelievable happened. The women, for whatever reason, sided with the Europeans and slaughtered their tribesmen. Peace returned to Pitcairn. A still from the film Mutiny on the Bounty 1962. Christian Fletcher played by Marlon Brando / Source: was.media.com

But already in 1797 the islanders faced a new problem. One of the former sailors, William McCoy, was able to make broth from the roots of the cabbage palm, from which he later distilled rum. Thus began a period of total drunkenness on the island, which ended only a few months later with McCoy’s death. The moonshiner, in a fit of fever, tied a stone to his neck and threw himself with it off a cliff into the sea.

READ
Colombo - the diversity of races, cultures and religions in Sri Lanka

Eighteen years after colonization, in 1808, the first ship, the American brig Topaz, sailed to Pitcairn. On the island it was met by 10 women, 24 children, and the only surviving adult man, John Adams. Remarkably, all the children born on the island could read and write. It was a credit to Adams, who taught them to read and write from the only book present on Pitcairn, the Bible. John Adams died in 1829. He is buried on Pitcairn Island and is still considered the patriarch and founder of the local commune.

In the fall of 1832 the Christian preacher Joshua Hill arrived on Pitcairn Island. After assessing the situation, Hill introduced himself to the islanders as an authorized representative of the British authorities. He took both leadership positions – schoolteacher and church pastor. But most importantly, the preacher became Pitcairn’s true dictator. Pitcairn adventurer and self-proclaimed leader Joshua Hill. Drawing of one of the islanders / Source: wikipedia.org

Pastor Hill ordered the construction of a prison on the island where all those guilty or who disagreed with the new policies were sent. In addition, before (or instead of) incarceration, Joshua Hill began to organize public floggings of all dissenters. Most importantly, the dictator strictly forbade moonshining on Pitcairn. Naturally, the majority of the islanders were dissatisfied with such “reforms”. But there was no riot or revolution on Pitcairn. By the end of 1834, Joshua Hill, who was getting on everyone’s nerves, began to show all the signs of imminent insanity. So the tyrant and dictator was simply removed from office.

Attempts to flee the island

Over the years, Pitcairn’s population grew. The islanders began to worry that in the near future this piece of land would not be able to feed its inhabitants. Forty-one years after colonization, in 1831, people made their first attempt to leave the island. They went to the place from which the first settlers came to Pitcairn – Tahiti. However, after six months and 17 deaths from various diseases, all the “Pitcairnites” returned to their native island. The second time the Pitcairnians decided to leave their homeland was in 1856. At that time, the population of the island had already reached the “critical point” of almost 200 people – the lack of resources became acutely felt. They decided to move to the small island of Norfolk between New Zealand and Australia. Pitcairn became uninhabited again for almost 3 years, until four families returned here.

Death to all pigs

Centuries after the first settlers arrived on Pitcairn, John Tay, a missionary and pastor of the Seventh-day Adventist Church, sailed to the island in 1886. The islanders voted at a meeting that Tay could stay on Pitcairn and try to explain his faith to the islanders. John Tay proved to be a very gifted preacher – four years later, in 1890, absolutely all the islanders became adherents of the Adventist Church. The people of Pitcairn did not hesitate to kill all their domestic pigs, refuse to drink alcohol, and were optimistic about their Christian future. For the whole 20th century Pitcairn lived in strict godliness, observing and keeping God’s commandments and the statutes of the Seventh-day Adventist Church. But at the very beginning of the twenty-first century, the islanders experienced a serious scandal. One-third of the men living on the island, including its head, were accused of molesting minors and children. Pitcairn again had to be built a prison. These days, the island’s population is just over fifty people. Since 2010, the British authorities have been lobbying for a program to attract new settlers to Pitcairn. However, in the past decade, only one person has expressed a desire to become a resident of the island. It is likely that in the coming years Pitcairn will retain the title of the most sparsely populated territory on the planet. Pitcairn Island is not the only remote territory from Britain, whose problems the authorities of Foggy Albion are trying to solve. Here is a story from which you can learn why the most remote school in the world, where there are 3 pupils, 2 teachers and a salary of 6 000 “green”.

Saona Island in the south of the Dominican Republic is one of the most popular tourist attractions. You can get here as part of a tour and on their own. Below you will learn all about this extraordinarily beautiful paradise place.

Resources to help the traveler 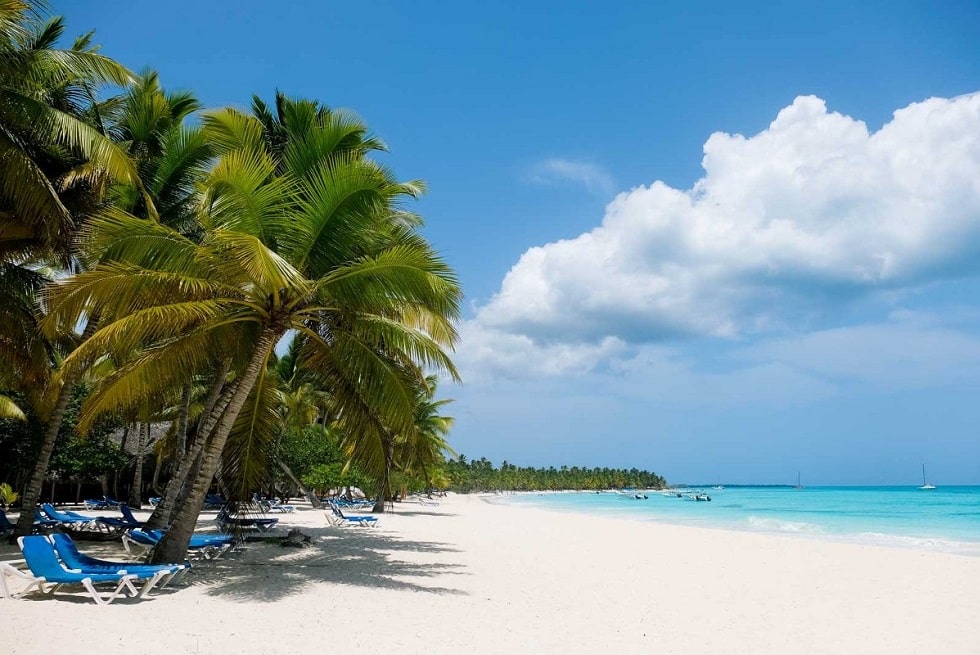 The color of the water is real. This is where it blows your mind. Color therapy for the eyes.

Saona Island in the Dominican Republic.

This place is especially popular with European and Slavic tourists, that’s why. All planes from the old world usually arrive at the airport of Punta Cana or La Romano. Resorts of Bavaro, Punta Cana and Cap Cana are located 20km from the airport and most tourists take a trip here.

By the way these resorts have a wide range of 4-star hotels, which are not much inferior to fives. Here are the ratings and reviews of 4* hotels in the Dominican Republic.

And the island of Saona, although far from the northern resorts or even the central part of the Dominican Republic, is very close to Bavaro and Punta Cana. This is why our tourists love to visit this attraction. And also because it is still very beautiful.

On the map above you can explore all points and places available for tourists. Well and further in the article I will tell you more about each of them.