In the warm Italian Tuscany, not far from Florence, there is a small provincial town of San Gimignano. Founded in the III century BC as a tiny village, in the X century AD the village acquired the status of a city and its present name. Since then San Gimignano has changed little, retaining its medieval appearance, which attracts tourists who prefer small but colorful places for recreation. Despite its modest size the town has a lot to show to connoisseurs of historic architecture and lovers of leisurely strolls through the narrow streets.

The main point of pride of San Gimignano are the fourteen towers overlooking the city. The tallest of them, the Torre Grossa, rises to a height of 54 meters and is open to the public. From the observation deck of the tower you can have a stunning view of the surrounding city. It is also a great place to take panoramic pictures of the historic center. 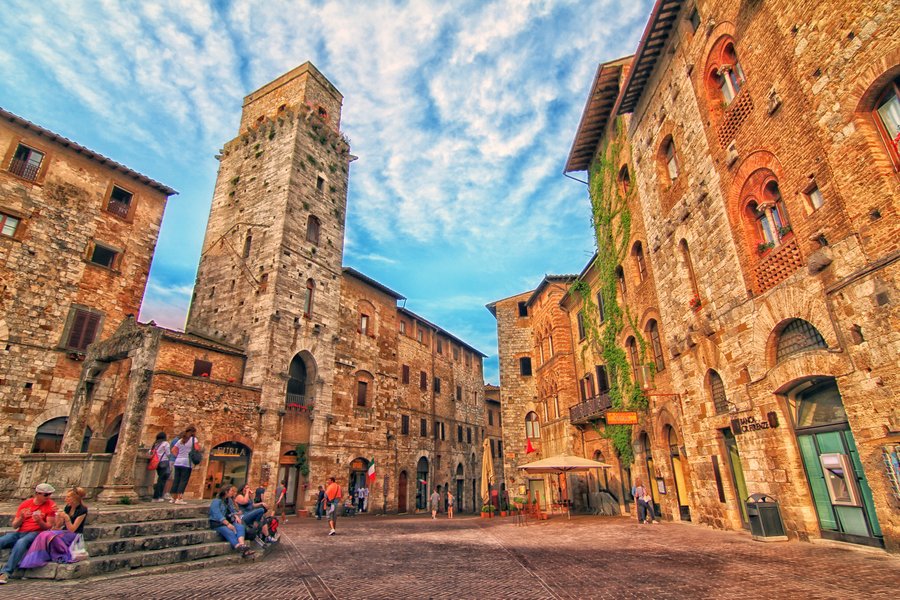 The heart of San Gimignano can be called the small square of Piazza della Cisterna, the square of the well. Centuries ago, two of the most important trade roads crossed here. The crossroads gradually widened and new houses and towers were built, so over time it became a square with an unusual triangular shape. It was always bustling with life, and there was also a local market and various tournaments. The well on the square was built in 1287. It is perfectly preserved in our time and became a favorite place for visitors. And also here you can relax and have a snack in one of the cozy cafes, or wander through the small souvenir shops.

The Cathedral Square is another important site in San Gimignano. The main architectural monument here is the church of Santa Maria Assunta, built in Romanesque style in 1148. Its facade has preserved its external appearance since its construction. Inside the church you can see a large number of medieval frescoes, unique architectural structures and a sarcophagus which until the beginning of the XVIII century housed the relics of Saint Fina, the patroness of San Gimignano. In addition to Santa Maria Assunta, in the square there are the Palazzo Municipio, the Town Hall and the Torre Grossa, the tallest tower in the city. 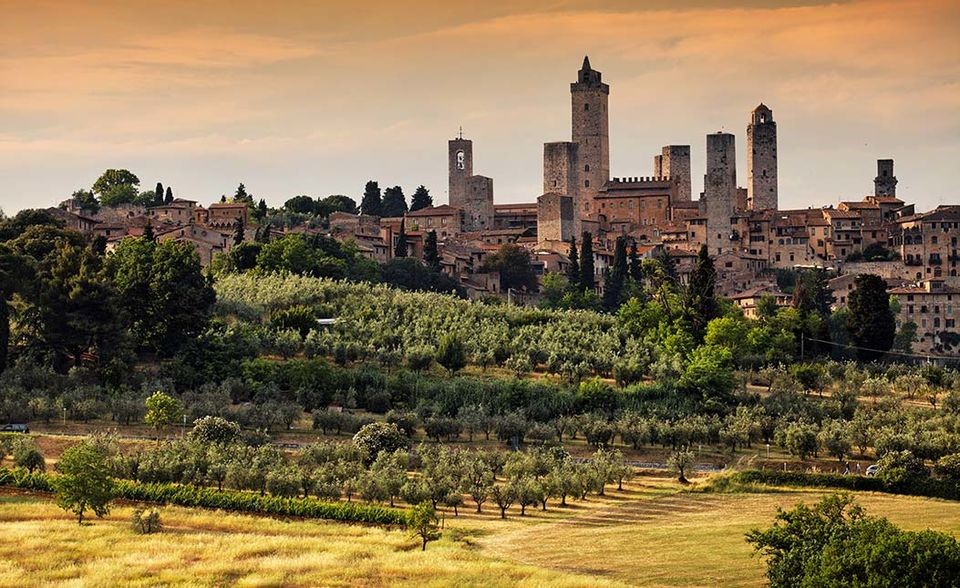 San Gimignano also has its own medieval skyscrapers. Two absolutely identical Salvucci towers were built by the influential Salvucci clan and rise to a height of 48 meters above the city. Today one of the towers houses a luxury hotel for tourists. In Piazza Sant’Agostino there is the medieval church of San Pietro, built in Romanesque and Gothic styles. The square itself is relatively far from the main squares of the city, where there is a lot of life. And so it is quite a quiet, rather secluded place, disposing to unhurried strolls. The interior walls of the church are decorated with numerous frescoes, including the oldest fresco of the city by Lippo Memmo. The church’s interior walls are decorated with numerous frescoes, including the oldest fresco in the city, by Lippo Memmo.

The church of San Jacopo in Tempio, built by the Templar Order after the First Crusade, is notable for its architectural brevity and austerity. Built in the 13th century in the Romanesque style, the church has remained virtually unchanged. Inside San Jacopo in Tempio you can see beautiful frescos dating back to the XIV century and a unique painting of “Madonna on a throne”. 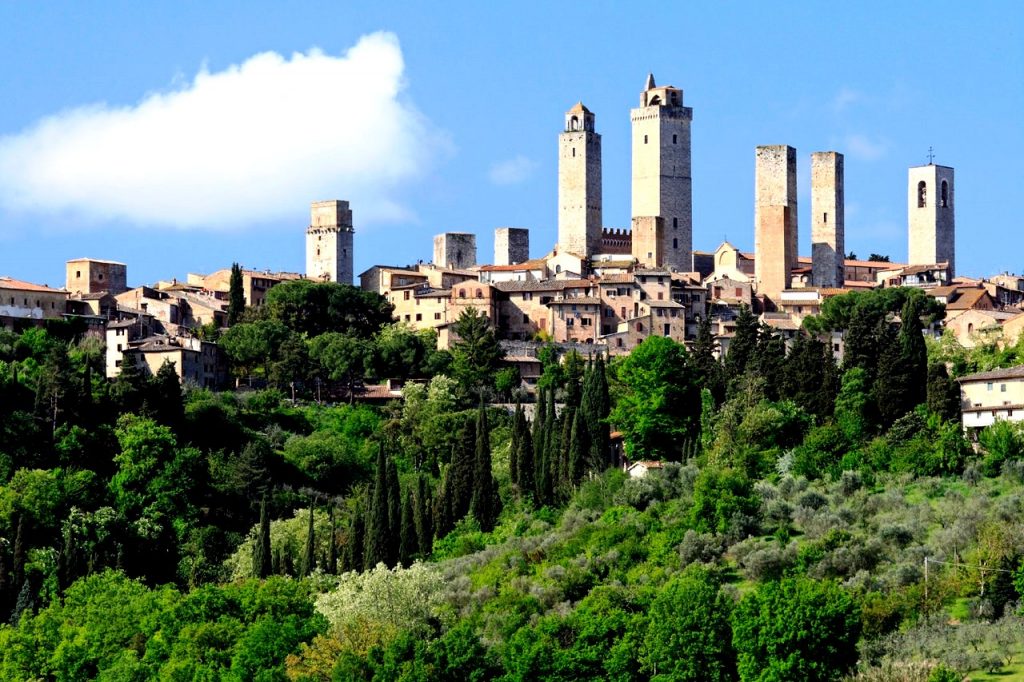 In San Gimignano there is also a modern museum, opened in 2010 and called “San Gimignano 1300”. It is a museum of history and art of the city. Several exhibition rooms display the most important periods in the life of the citizens of the Middle Ages, as well as various archaeological rarities found during excavations. But most of all the museum impresses with a stunning ceramic reconstruction of the city, made by hand in 1:100 scale. This installation faithfully imitates the streets and squares of the city as they existed in the XIV century.

After enjoying the rich cultural heritage of San Gimignano, you can go on very unusual excursions of the city to the Museum of Wine and the Museum of Torture. The wine museum is located on an elevated site, overlooking the unique scenery of the surrounding countryside. It is dedicated to the history of winemaking in San Gimignano. There are interesting lectures on centuries-old wine-making traditions and regular tastings. The Museum of Torture displays the Inquisition’s sophisticated equipment, collected from all over Europe and providing a vivid example of the church’s reprisals against undesirable citizens in the Middle Ages. The elaborate wax mannequins depicting victims of torture complete the picture, which certainly adds to the experience. So it is better for the nervous tourist to refrain from visiting the museum. 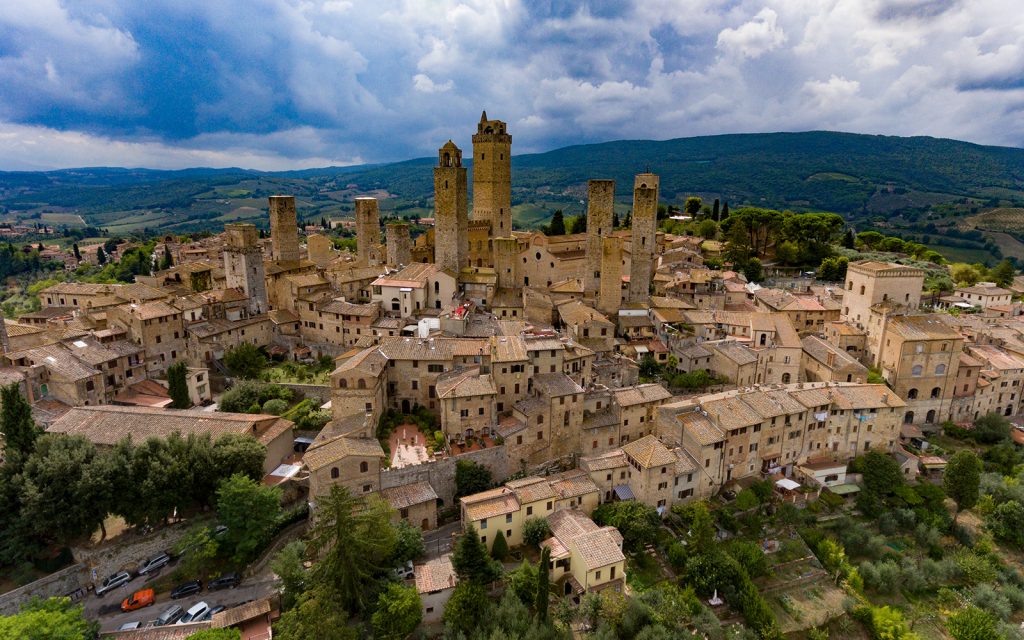 All the attractions of San Gimignano can be listed for a long time. Despite the small town, you can see a significant number of unique buildings, visit a variety of museums, visit the many squares. The city is saturated with the spirit of the Middle Ages, and its distinctive atmosphere charms from the first minutes and forever. Walking through the narrow streets of San Gimignano, admiring the beautiful scenery and feeling the local flavor, you will definitely want to return to this cozy Italian town again.

San Gimignano delle Belle Torri is in Tuscany, 56 km south of Florence. The patrician families, who ruled the city, built 72 towers (some up to 50 m high) as symbols of their wealth and power. Only 14 of these have survived to this day. However, San Gimignano has preserved the atmosphere and appearance of a feudal town. Not surprisingly, it was one of the first (after the world-famous monuments of Milan, Rome, Florence, Pisa and Venice) to be inscribed on the UNESCO List of World Cultural Heritage from Italy. This happened back in 1990. 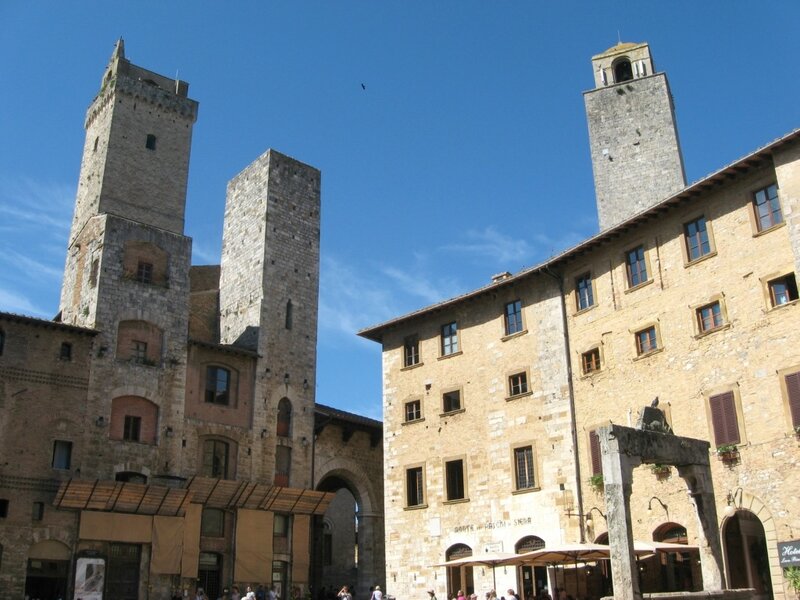 San Gimignano was founded as a small village in the third century BC by the Etruscans. Later on this site was built the Roman fort of Silvia. The village became a city in the tenth century A.D. and was named San Gimignano after the bishop of Modena, Geminianus, who, according to legend, stopped the Hun hordes at the walls of the city. The city grew rapidly thanks to the Via Francigena, the most important trade and pilgrimage route of the time. The population reached 15,000, twice as many as today’s 7,100. In the middle of the XIII cent. the city was surrounded by fortress walls.

READ
Hawaii, USA is an archipelago called the Blissful Islands. 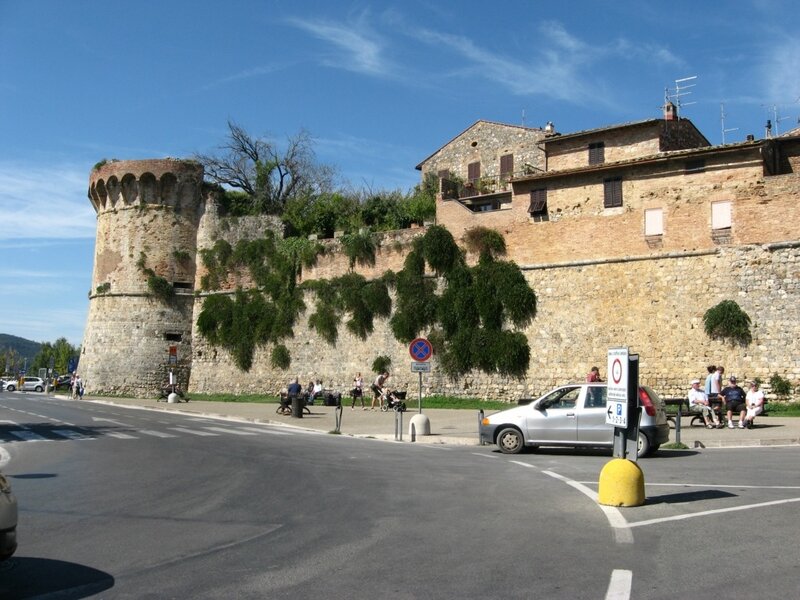 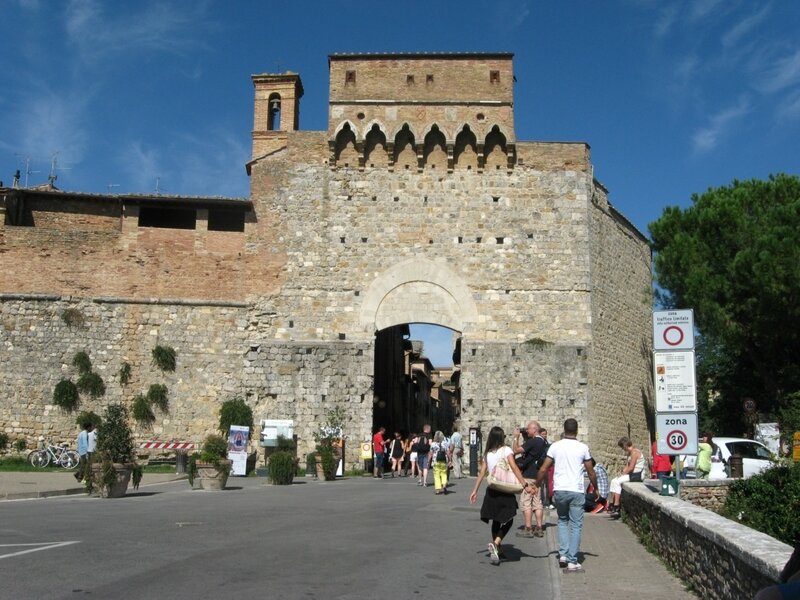 In the middle of the XIV century feuds and plague epidemics undermined the prosperity of the medieval republic, and in 1352 the city came under the power of Florence. The plague struck twice more and the resulting economic decline turned San Gimignano into a poor backwater. The lack of new construction actually mothballed the medieval town, which was already noticed by travelers in the 19th century. Since then the city is an important tourist center of Tuscany. 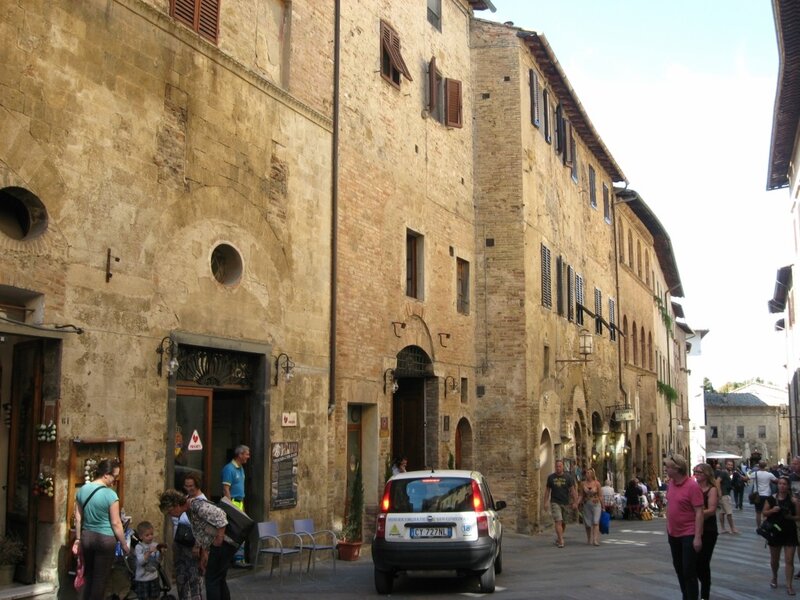 The main architectural “highlight” of San Gimignano are certainly the fourteen medieval towers built in the XI-XIII centuries by the noblest families who wanted to emphasize their social status. 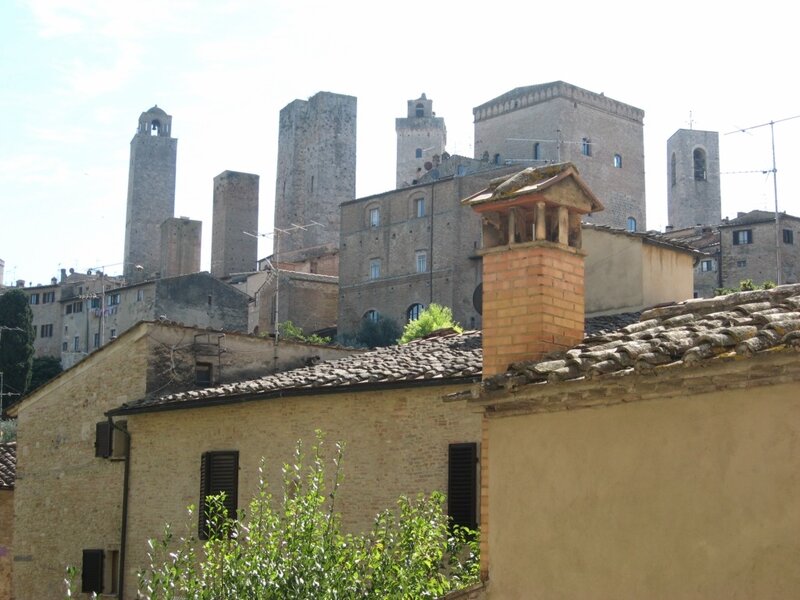 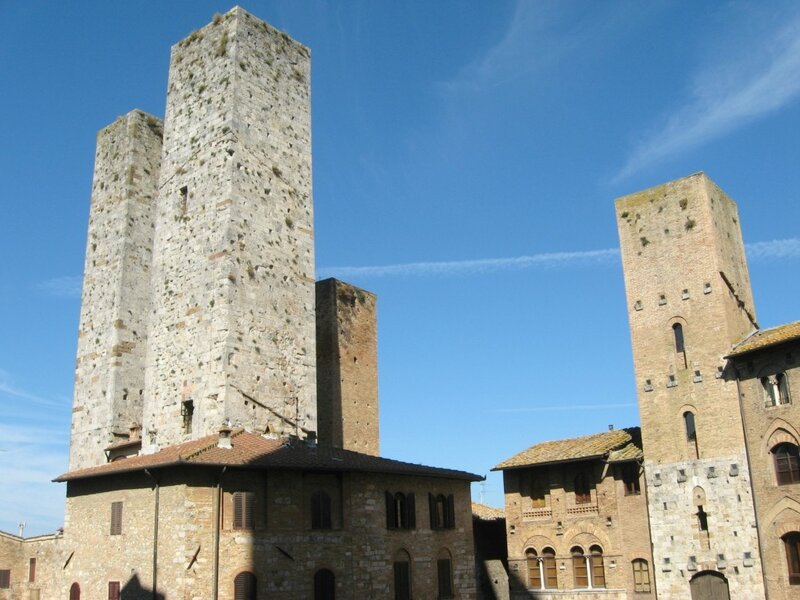 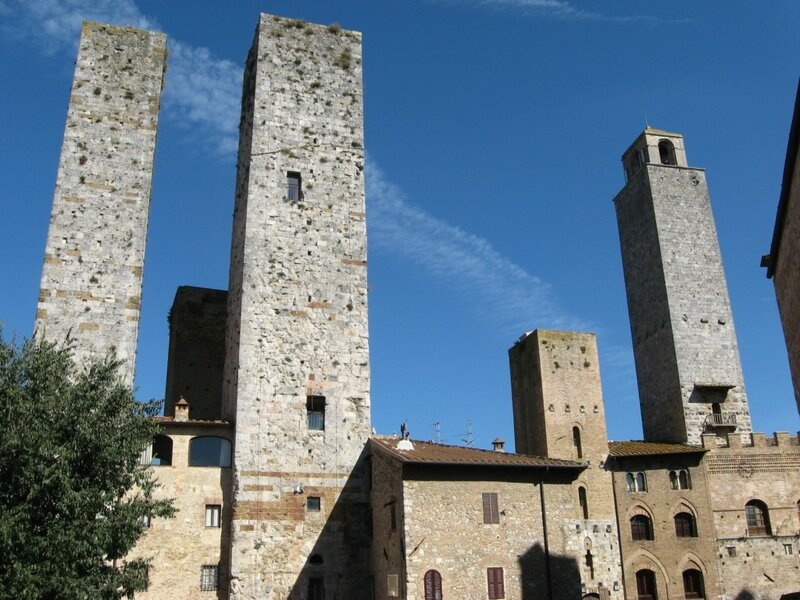 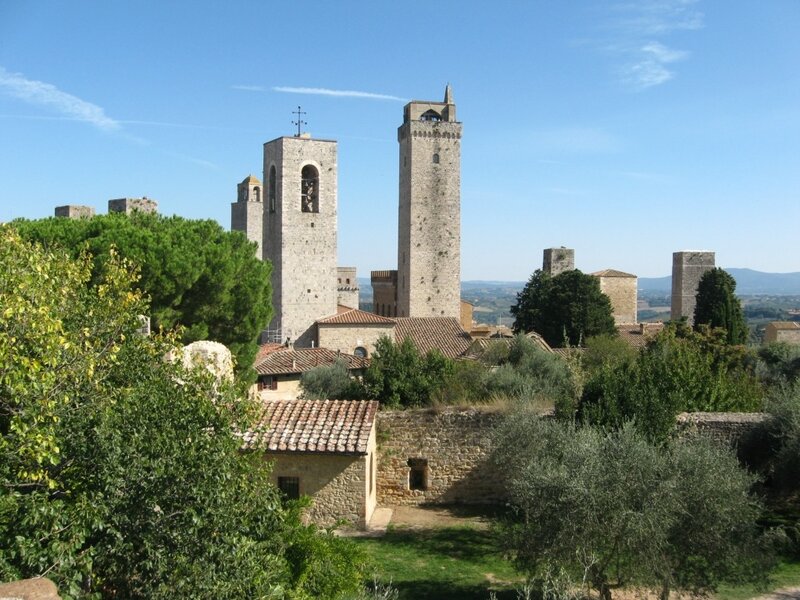 The medieval town was built mainly around two nearby squares, the triangular Piazza della Cisterna,

decorated with a picturesque well, 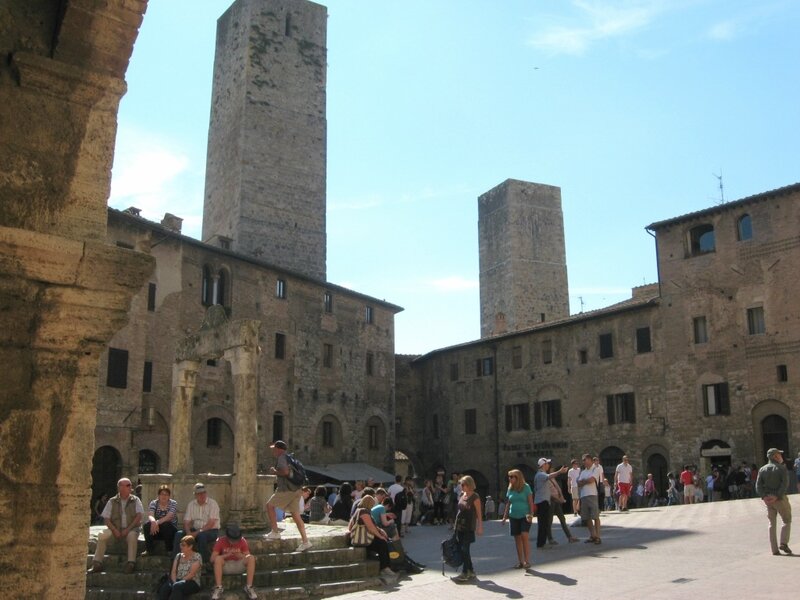 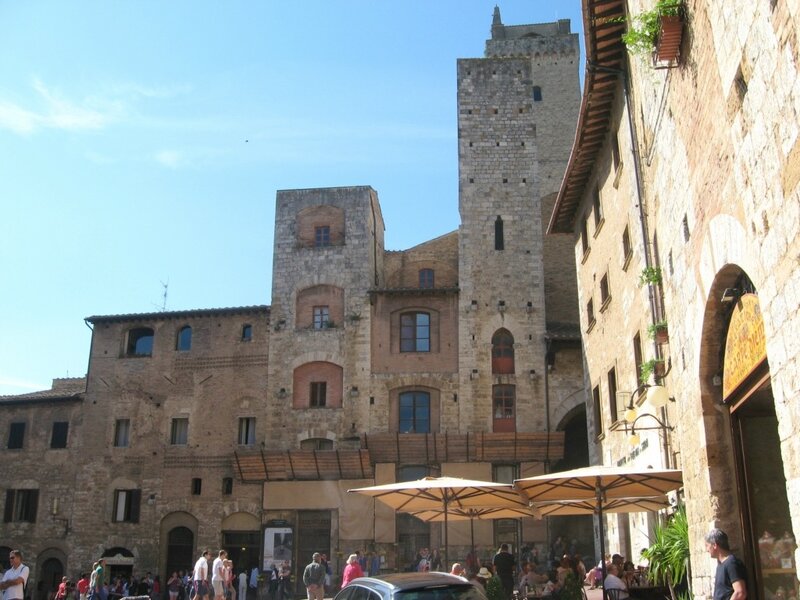 Piazza del Duomo, with notable buildings such as the Old Podesta Palace (1239) and a number of palazzo towers. 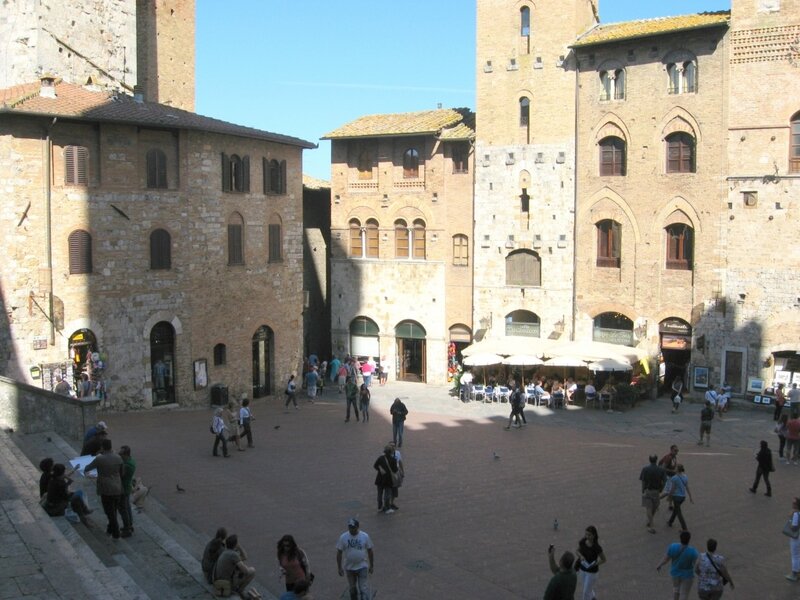 Here you can also find the Palazzo Comunale, or Palazzo nuovo del Podesta, or Palazzo del Popolo (1288-1323), which houses the municipality, and an art gallery. By the way, the word “Podesta” means just the head of the administration (podestata) in the medieval (XII-XVI centuries) Italian city-states. 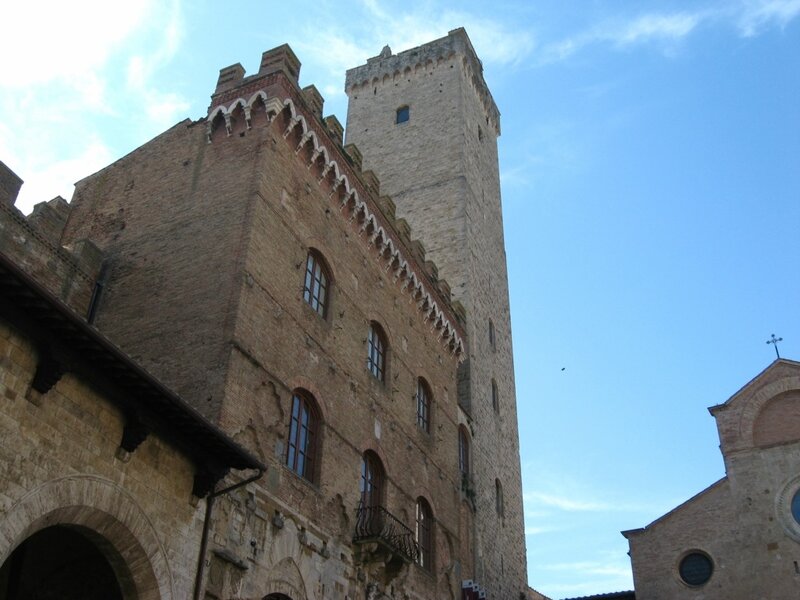 Consecrated in 1148, the cathedral church (Collegiata di Santa Matia Assunta, or Church of the Assumption of the Blessed Virgin Mary) was significantly expanded and rebuilt in the XV century. 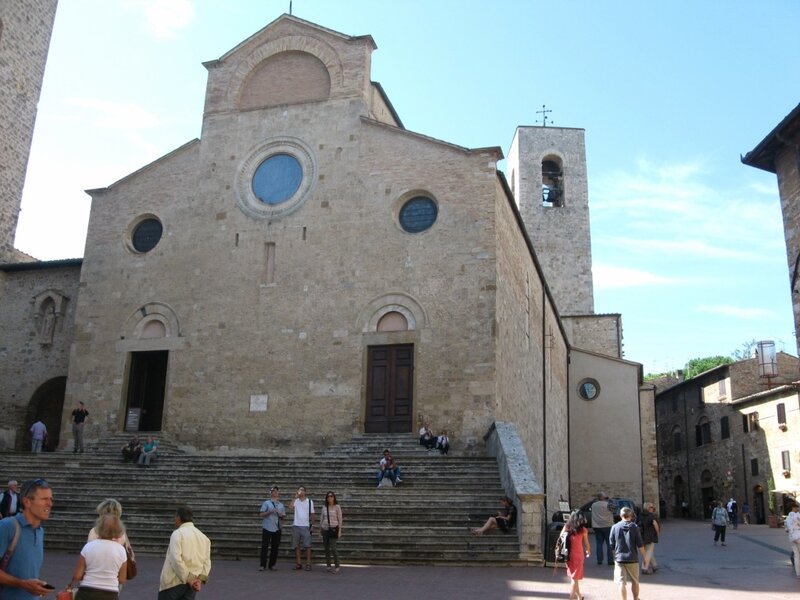 Another interesting structure in the city is the Rocca di Montestaffoli, built by the Florentines in 1353.