Why there are no dogs in Antarctica, what is a “bloody” waterfall and other macro facts about the harshest continent

There are so many more interesting and unexplored places on our planet that we know so little about. And one of them is Antarctica, a very harsh continent, covered with centuries-old ice and a haze of mystery. Here is the most fascinating data about Antarctica – from the first romantic encounter to the established records. One day in December, an American scientist decided for the sake of interest to use the app Tinder to find out if there are women in Antarctica. At first, the app returned no results, but as soon as he broadened the search radius, he found what he was looking for. The girl he was looking for was found not far away, 45 minutes away by helicopter, who also used Tinder and marked the scientist as her favorite. In doing so, the two became the first known couple on this continent.

2. Some places in Antarctica have never had snow or rain Almost 1% of Antarctica, which is more than 4,000 km, is an area without snow, the so-called “dry valley”. It is considered one of the most severe deserts in the world. Scientists also note that this area, probably more than two million years, there has never been any precipitation. In addition, Australian scientists have conducted their own research, according to which the ice-free area may significantly increase due to climate change around the globe, which would have a significant impact on biodiversity on the continent.

3. There is a “blood” waterfall in Antarctica

In reality, of course, we are not talking about any blood. More than 5 million years ago, part of this continent was flooded, due to which, as a result of rising water levels, a salt lake was formed on its eastern part. A little later, glaciers were already formed on this lake. Since the water in it is several times saltier than the ocean water, the lake never freezes. In addition, the water beneath the Taylor Glacier, which feeds the salt lake, is incredibly rich in iron, which turns red in its natural reaction with the air.

READ
The most beautiful mountains in the world

4. Most meteorites have been found on this continent According to scientists’ research, meteorites fall everywhere. However, thanks to Antarctica’s dry and cold climate, meteorites falling here are not corrosive, and they are much easier to spot on the snowy surface than if they had fallen somewhere in the distant jungle. In addition, the ice and snow melt periodically, which makes it possible to discover many interesting things underneath. Since 1976, for example, more than 20,000 meteorite samples have been found on this continent.

5. Antarctica does not have its own time zone Officially, Antarctica is considered uninhabited, and therefore it is not divided into time zones. However, the research stations located on its territory use the time zones of their country, from which they come, or the local time of the countries that are closest. For example, McMurdo station uses New Zealand time, and Palmer station uses Chile time.

6. The largest iceberg was larger than the island of Jamaica Is considered to be an iceberg B-15, whose length was two hundred and ninety-five kilometers with a total area of 11 thousand square kilometers, 100 square kilometers larger than the aforementioned island. Unfortunately, according to scientists, this iceberg disintegrated in the early noughties and then sank into the ocean.

7. Sled dogs are banned in Antarctica In 1991, sled dogs were eagerly used on this continent. A group of Norwegian explorers, led by Rual Amundsen, used dogs to transport supplies. It was the first recorded expedition to reach the South Pole. After that, sled dogs were kept on the territory of Antarctica for a long time and were willingly used for various tasks. However, in 1993 the authorities reconsidered their decision and it was decided to ban sled dogs in Antarctica, because scientists feared that they could transmit canine distemper to the seals or simply escape from the cages and thereby affect the wildlife.

8. Beneath the ice of Antarctica there are over three hundred lakes More than three hundred large lakes have recently been discovered under layers of ice. They are never covered by ice because their waters are too warm and are heated by the temperature of the Earth’s core. These lakes make up a single hydrological network hidden beneath the ice. Thus, some of them are literally interconnected and share water, while others are completely isolated, which means that their water is several thousand years old. Many scientists agree that in these lakes it is probably possible to find microorganisms that have not been studied before.

9. Antarctica recorded the lowest temperature on the planet In 2013, this figure was -93 degrees Celsius, but a few years later it has been significantly revised. Thus, scientists found out that in the coldest point on the planet the temperature can fall to a value of -98 degrees, which was observed during the winter and polar night. According to scientists, such a temperature is considered an absolute record, which arose due to special conditions – clear skies and dry air. Note that the highest temperature ever obtained in Antarctica was +17.5 degrees Celsius. This discovery was made in 2015 at the Argentine base of explorers Esperanza. 10. There are no ants or reptiles at all in Antarctica Antarctica, the Arctic and some other remote islands are the only places in the world not colonized by ants.

Surprisingly, virtually every piece of Earth, regardless of location, has been colonized by some kind of ant. However, Antarctica and the Arctic, as well as several other remote islands with harsh climates, can boast that there are no ants on their territory! In addition, there are no reptiles or snakes in the area.

11. due to global warming, Antarctica has lost 3 trillion tons of ice Scientists from around the world have calculated that Antarctica has significantly reduced its ice reserves over the past twenty-five years. Unfortunately, over the past five years, the melting of the glaciers has only accelerated. According to an analysis of satellite imagery from 1992 to 2017, 84 international researchers have determined that Antarctica is now losing its ice cover three times faster than it was before 2012. And that’s about 241 billion tons of ice each year.

12. Wind speeds in Antarctica can be 200 miles per hour

This continent is considered one of the windiest on Earth, and is home to catabatic and slope winds. They are influenced not only by the cold climate, but also by temperature differences and the topography of the continent itself. The highest wind speed was recorded in 1972 at a French research base and was 320 kilometers per hour.

13. Polar bears do not live in Antarctica. Many people think that these animals are widespread throughout the Arctic Circle, but that is not true. Polar bears are now found in the Arctic, Norway, Canada, Russia, Greenland, and even Alaska. However, they have never been able to reach the South Pole because the way there is blocked by tropical temperatures by their standards and there is no possibility that polar bears will ever inhabit this territory.

14. There are Christian churches in Antarctica Even despite the harsh climatic conditions, the people who live there still find time to build places of religious worship. Today, there are already seven Christian churches on the icy continent, including the so-called Church of the Snow, Prince Vladimir’s Chapel and the Church of Santa Maria Reina de la Paz. 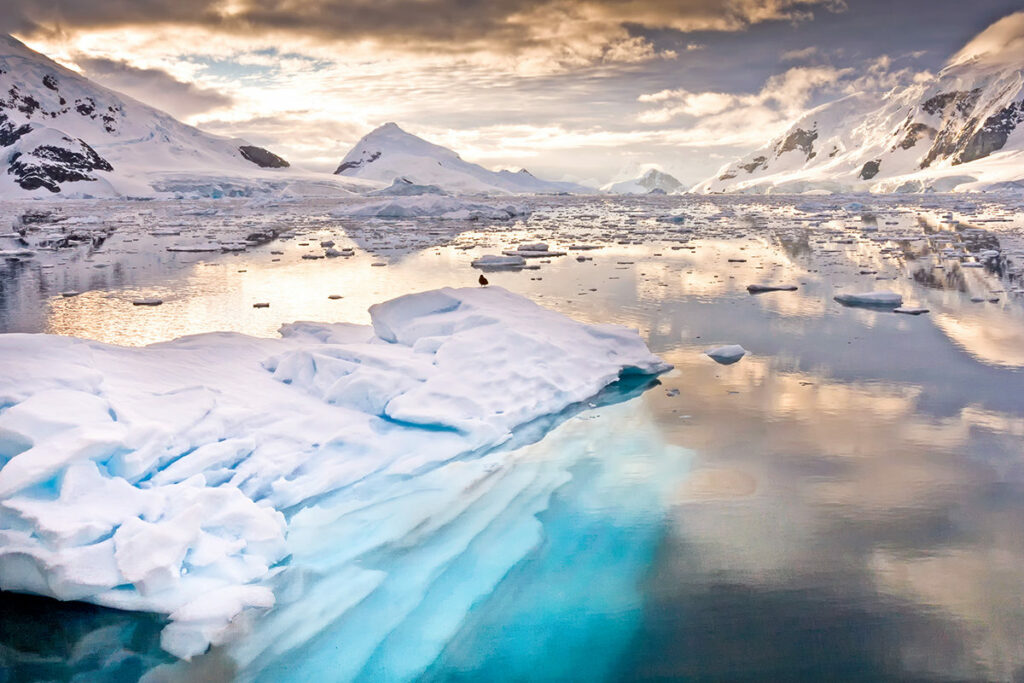 We invite you to take a trip to Antarctica . In the center of the southern hemisphere of the earth is a huge, very cold and deserted continent called Antarctica . At the moment it is the last unexplored territory of our planet, which is in complete isolation from the other continents. The first people who visited there in 1820 were Russian scientists Lazarev and Bellinghausen. Thanks to their expedition, the regular study of this continent began. Decades passed and scientific expeditions from Germany, France, America, Norway and Australia rushed to the shores of Antarctica to discover the mystery of the white continent. Seventy-five years after the mainland was discovered in 1895, man was able to land there for the first time. That discoverer was a member of the Norwegian expedition Carsten Borchgrevnik . In the 20th century, many scientists from different countries have visited Antarctica with their research missions.

READ
The Algarve, Portugal - the infinity of the sea 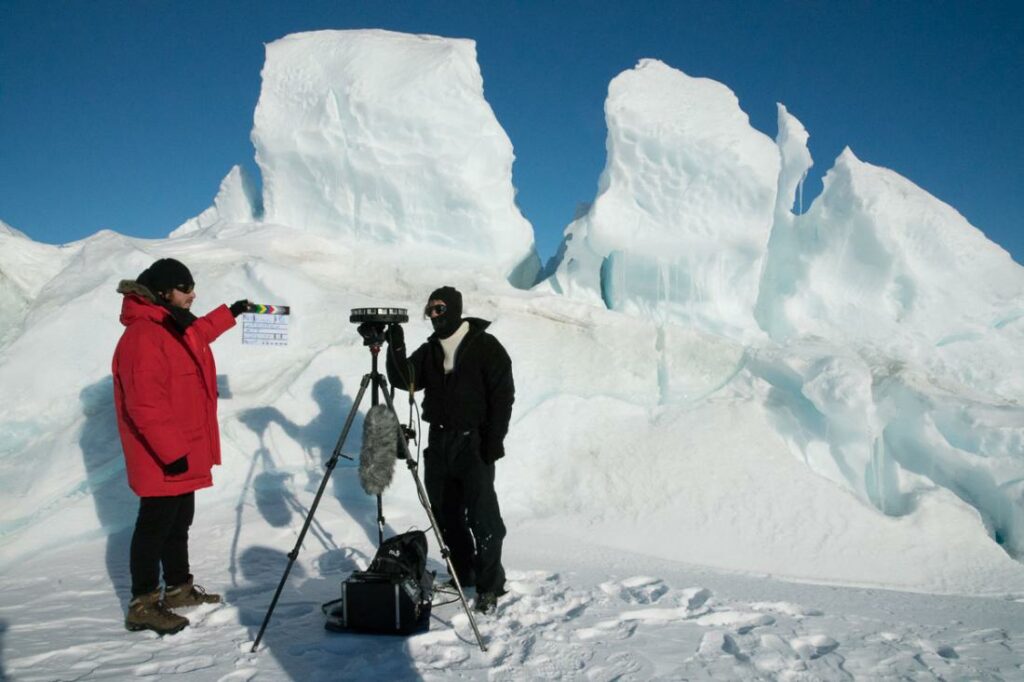 As we know Antarctica is a buried under the ice continent, an area of 15 thousand square kilometers. Its characteristic feature is the height, namely 2300 meters above sea level. 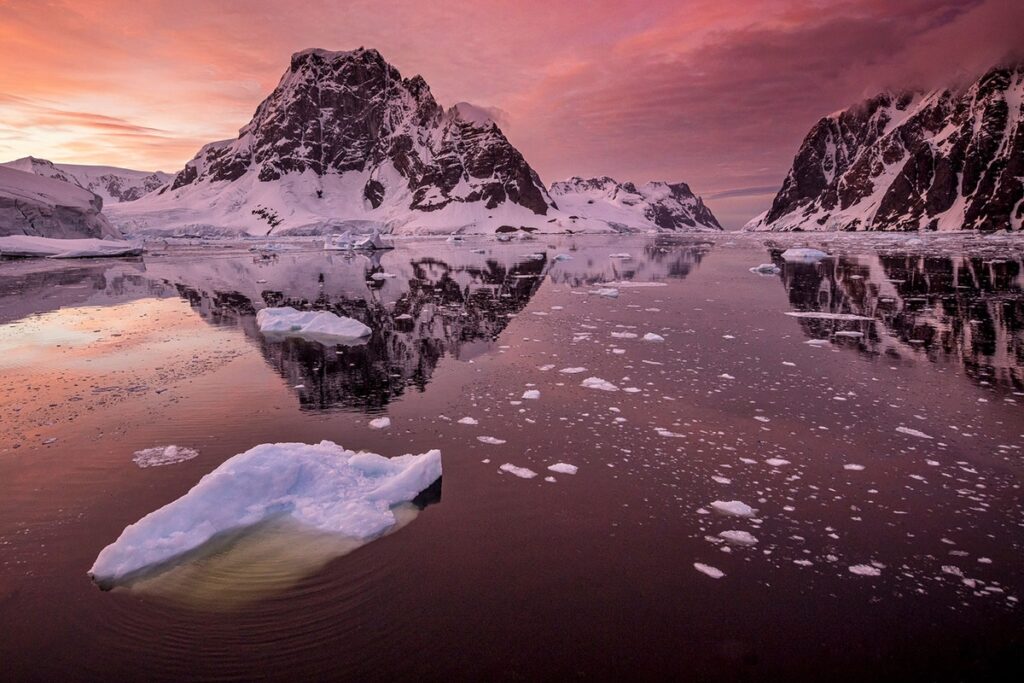 Geologically Antarctica is divided into two parts of equal size: western, which occupies 25% of the area of the continent, and the eastern 75% . Throughout the continent stretches a chain of mountains, the height of which in some places reaches 5000 meters. In Antarctica grandiose accumulations of ice, and if you melt it, the waters of the ocean rise by 50 meters. The ice, which covers the entire continent, under its own weight begins to move slowly from the center to its outskirts, and when it reaches it begins to break. 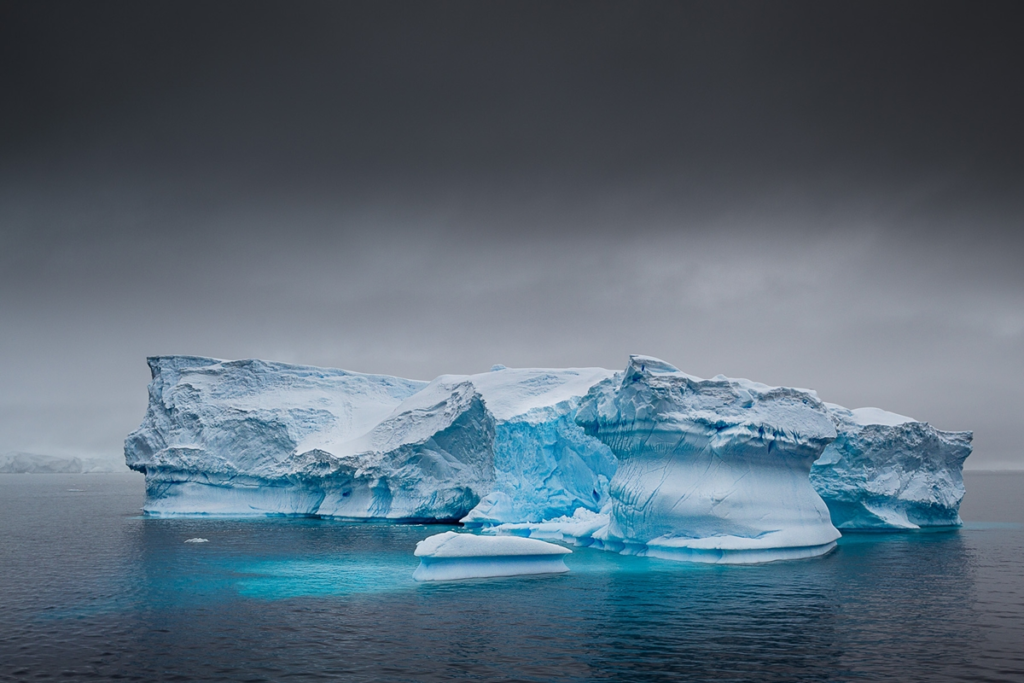 Ice blocks have been floating in the ocean for many years, posing a very great danger to navigation. There are floating ice mountains of enormous size, their length is 120-160 kilometers. The thickness of the cover of Antarctica varies from two to four kilometers. 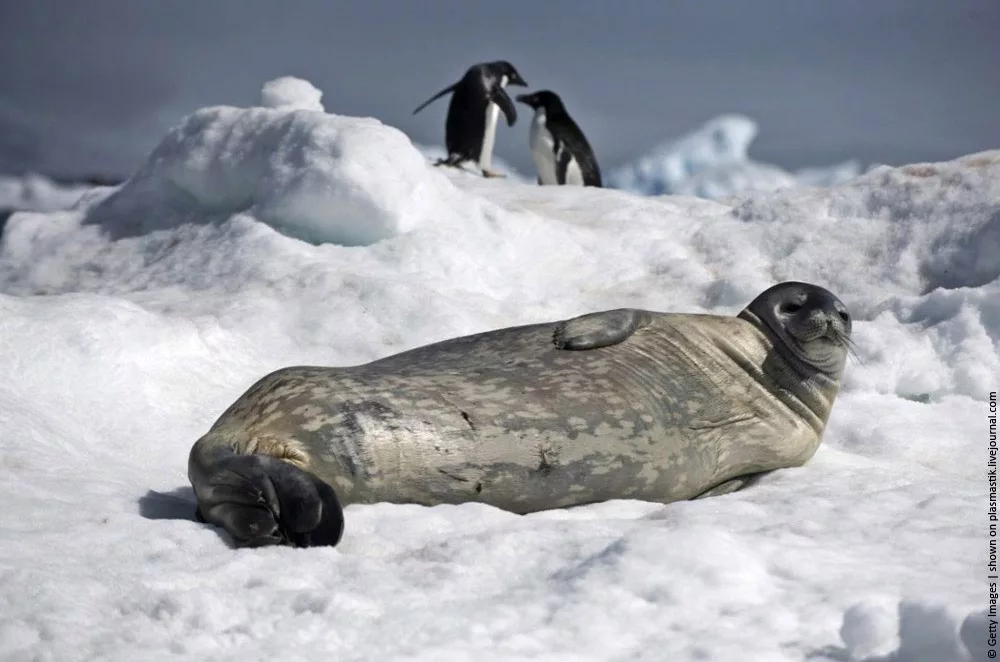 Lowest temperature Antarctica, which recorded the thermometer was – 88 degrees. Because of the very severe cold, vegetation is very sparse on the mainland. Sometimes you can see small patches of gray and black on the bare rocks. Scientists say they are small lichens. Seals live on the coast all year round. There are 4 species of them, namely the crab seal, the Ross seal, the Weddell seal and the sea leopard. In summer, a lot of birds come to the shores of the continent, among them: capercaillie pigeons, coots and snowy petrels. The most typical inhabitants of this harsh land are penguins. These birds have a large subcutaneous fat layer. These birds live in colonies of 15-20 thousand individuals.

Antarctica is very harsh and dangerous continent, but polar explorers with superhuman efforts are trying to open big secrets of the continent.