One of the main treasures of Campania is the grand royal palace at Caserta, which is the largest residence of monarchs in Europe. The palace was built by King Charles VII of Naples of the Bourbon dynasty in the second half of the 18th century and belonged to the Bourbon dynasty until the unification of Italy, except for a short period of French domination. In 1997 the luxurious palace and park complex was registered on the list of the World Heritage Sites by UNESCO and is today one of the most visited sites in Italy.

The construction of the new palace for the King of Naples was entrusted to one of the best architects of the 18th century, Luigi Vanvitelli, who at that time was involved in the restoration of the Basilica of Loreto (Basilica della Santa Casa). Since the restoration of the temple was commissioned by the head of the Holy See, the king had to personally request that the pontiff allow him to employ Vanvitelli on his project.

The monarch purchased a plot of land for his future residence and set the following tasks for the architect: to design the palace, to build a new aqueduct, to create a luxurious park, and to improve the grounds surrounding the complex. The royal residence was to be the symbol of the new government, the embodiment of power and majesty of the House of Bourbon. The palace project was part of Charles’ grandiose political plans. He wanted to move some of the administrative organs to Caserta and also build a wide thoroughfare that would directly connect the royal palace to Naples. Today the residence of the Neapolitan monarchs is impressive in its splendor and monumentality, even though Vanvitelli’s original project was never fully realized. Construction of the palace

Luigi Vanvitelli arrived in Caserta in 1751 and immediately set about designing a palace and park complex. On 22 November of the same year he submitted the finished design to the king for his approval, and two months later a ground-breaking ceremony was held. This event is depicted in the fresco by Gennaro Maldarelli that adorns the Throne Room.

A year after the start of construction, the landscaping of the park was launched. The palace complex at Caserta had been under construction for decades. After Luigi Vanvitelli died in 1773 his son Carlo, an equally talented architect, took charge of the project.

The first king to choose Caserta as his hunting residence was Ferdinand IV, who left the Royal Palace in Portici after the eruption of Vesuvius in 1767. His wife Maria Carolina was particularly attentive to the decoration of the interiors. She gave the palace a fine collection of paintings, as well as a splendid collection of porcelain. 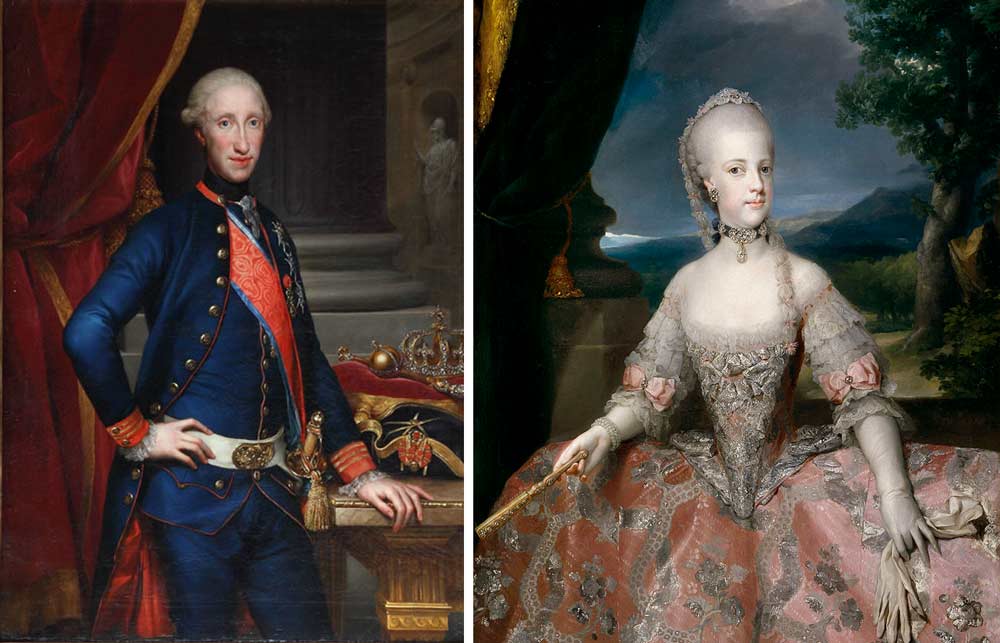 Ferdinand IV of Bourbon and Maria Caroline of Austria

In 1806, after the conquest of the Kingdom of Naples by Napoleon, who transferred power in Naples to his brother Giuseppe, the Bourbons were forced to flee to Sicily. All the property belonging to the House of Bourbon passed into the possession of the new monarch. After the French conquest of Spain in 1808, Giuseppe Bonaparte became head of the new state and the throne of Naples was taken by Joachim Murat. The palace complex at Caserta pleased the monarch. He created new palace apartments in pompous imperial style.

After the re-establishment of the Bourbon dynasty and the proclamation of the Kingdom of the Two Sicilies, the palace complex was used as a country residence and gradually fell into disrepair.

In 1860 Naples became part of the Kingdom of Italy and the palace was occasionally used by the House of Savoy. In 1919 King Victor Emmanuel III passed on the magnificent complex to the State.

With an area of around 100,000 square meters, the Royal Palace of Caserta has 5 floors (not counting the two underground ones), 1,200 rooms, 1,742 windows, 1,026 fireplaces, 56 staircases, as well as four courtyards, each of which covers an area of over 3,800 square meters. This luxurious palace and park complex together with its famous gardens stretches for 4 kilometers! The palace is a 250 m x 250 m square building with two crisscrossing galleries that divide it into four rectangular courtyards. Caserta’s Royal Palace has four identical facades. Each of them is decorated with twelve columns and has a protruding central part topped by a pediment. The main entry portals lead to through galleries, at the intersection of which an octagonal vestibule is arranged. The octagonal vestibule has a broad staircase called the “Staircase of Glory”, which leads to the upper floor of the palace, where the royal apartments are located. 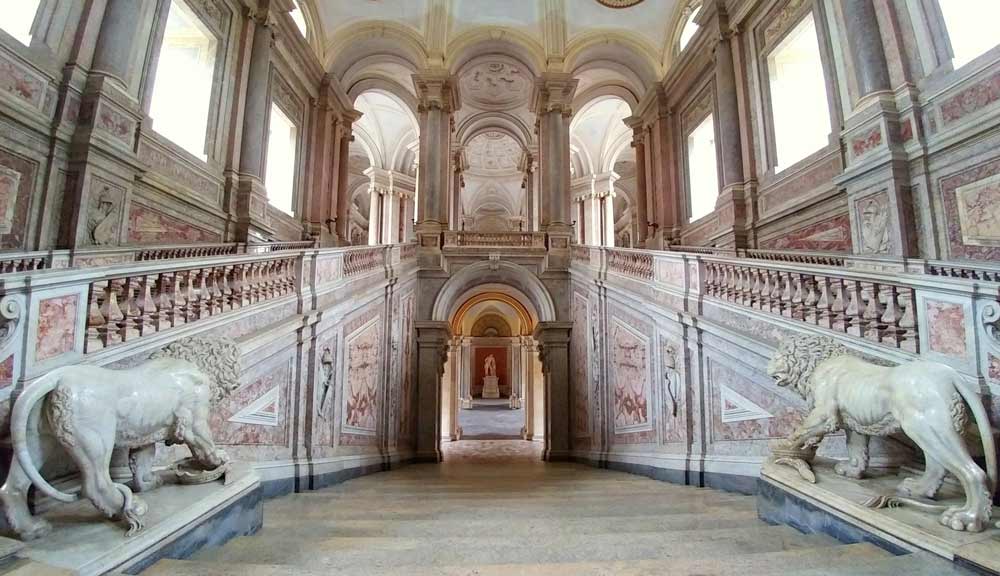 The staircase consists of a large central flight leading to a wide platform from which two lateral parallel stair elements rise upwards. Each is made of a solid block of marble and consists of 117 steps.

The central staircase, “guarded” by two marble lions, offers a beautiful view of the main decoration of the grand staircase – a monumental exposition with three sculptures. Their symbolic significance, which the architect described in detail in the documentation accompanying the project, is to represent the “powers of mind and arms” inherent in the kingdom of Bourbon. All three sculptures are made of plaster and are placed in niches on pedestals. At the center is a statue of Charles III of the Bourbon dynasty, King of Naples from 1734 to 1759. On either side of it are the allegory sculptures, representing Dignity and Truth. Different masters worked on them: Climbing up the grand staircase of the royal palace, it is impossible not to notice the magnificent ceiling vault, decorated with paintings by Girolamo Starace-Francis (1730-1794). In the center is a fresco depicting the Kingdom of Apollo, surrounded by four medallions with allegories of the seasons.

The double staircase ends with a spacious vestibule at the center of the structure, which provides access to the other palace rooms: the Palatine Chapel, the royal apartments, the throne room, the theater, etc.

The Palatine Chapel of the Royal Palace at Caserta was created based on the Chapel located in Versailles. Its inauguration took place on Christmas Day 1784 during the service of the festive mass in the presence of King Ferdinand IV of Naples. The chapel has just one nave with two side aisles on either side, separated from the main space by double pilasters. These lead to the sacristy, where a small collection of church utensils is on display. Pair columns supporting the cylindrical arch are installed on pilasters. The floor is made of polychrome marble.

The apse of the chapel is decorated by a work by Giuseppe Bonito – a picture “The Immaculate Conception of the Virgin Mary”. Here is also the main and only altar of the royal chapel, which is only a model of the planned altar. It was to be made of precious stones (amethyst, lapis lazuli, agate, jasper, etc.). The stone tabernacle was also not realized for unknown reasons. Today we can see only its wooden polychrome model.

On August 27, 1943, Caserta was bombed by the Americans, causing considerable damage to the decoration of the Palatine Chapel. The ceiling, columns and walls of the chapel were damaged, and both organs and seven of the eight canvases painted for the chapel were completely destroyed:

Shortly after the end of World War II, active restoration work began on the monument of architecture. 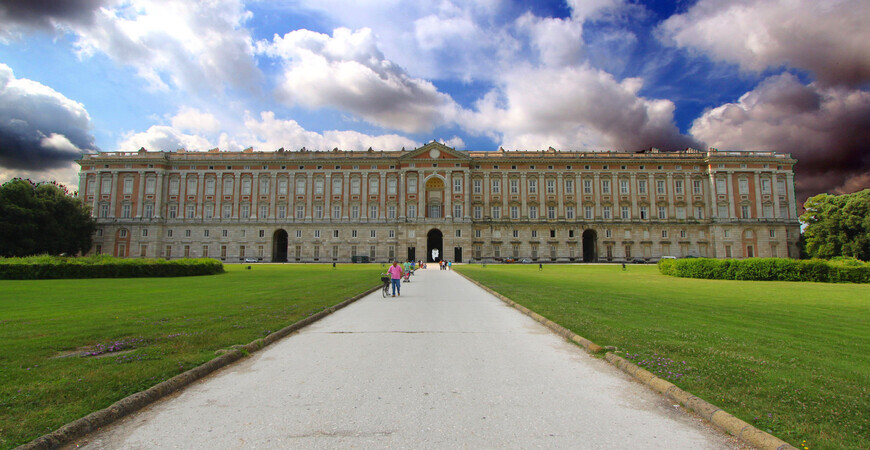 The enormous palace and park complex of Caserta, 26 km from Naples, is a World Heritage Site since 1997. It is the biggest royal palace in Europe, built in the middle of the 18th century combining late Baroque and Classicist elements. The palace and park of Caserta, along with the ruins of Pompeii, are among the major attractions of southern Italy.

It was the location for filming such films as “The Da Vinci Code” and its sequel “Angels and Demons”, “Mission Impossible” and even some scenes of “Star Wars”. Part of the palace is open to the public and has been turned into a museum, a huge area of the park is available for walks. It is worth setting aside at least 3-4 hours to see everything that is there.

Tourist transport runs through the territory: minibuses (2.5 €) and horse-drawn carriages (50 €), there are bicycle rentals. The park has two cafes: at the entrance and at the fountain of Diana and Acteon, there are also toilets.

At the entrance you can get a free map of the area. There is a store with souvenirs and books outside the palace. There are audio guides in Italian, English, French, German and Spanish, priced at 5€ per person. There is its own luggage room.

READ
Twins or twins of the world's famous landmarks

There are guided tours and school activities and you can book at caserta@operalaboratori.com.

Architecture and interiors of the Caserta Palace

This palace was built from 1752 to 1780. Construction was begun under Charles XVII Bourbon by the famous architect Luigi Vanvitelli. The architect was inspired by the royal palace in Madrid and the French Versailles. But after Charles became King of Spain in 1759 and left Naples, construction slowed down. In 1773 Luigi Vanvitelli himself died. Construction was already finished by his son Carlo for the next royal couple: Ferdinando IV and his wife Maria Carolina of Austria, who moved here after their primary residence in Portici suffered another eruption of Vesuvius.

During the first half of the nineteenth century the palace was completed and continued to be decorated; the rulers of Naples used it as a country residence. The most famous king of Naples who lived here in the nineteenth century was the famous Napoleonic marshal and brother-in-law Joachim Murat. Since 1919 the palace complex passed into state ownership and became a museum.

The total area of the square building, including 4 courtyards – 47 thousand square meters, height – 37 m, length of facades – 250 m. There are a total of 1200 rooms, about one tenth of the territory is accessible to visitors: it is a hall, ceremonial halls and living quarters in the north-west wing.

Here you can see:

The total area of the park grounds is 120 ha, and the length of the regular Upper Park with its cascade of ponds, waterfall and fountains is 3 km. The fountains are decorated with numerous sculptures on mythological themes, and decorative carps live in the ponds.

The Aqueduct of Vanvitelli supplies the ponds and fountains with water, considered a miracle of engineering. Its total length is 38 km, and it was built on the model of ancient Roman aqueducts.

One of the attractions of the park is Castellucca – a miniature “mock” fortress of Ferdinand IV with an artificial lake. Game battles, including naval battles, were fought here. This part of the park is called the Old Forest.

The lower park is often called the English Garden. It was created at the very end of the XVIII century for Queen Mary Caroline by the German botanist Johann Greffer. Now it is a favorite place for walks of visitors, but at that time the park in the English style, imitating the natural environment, was not popular and was considered unsuccessful. There are oaks, hornbeams, oranges, and many exotic plants growing here: in fact, it would not so much be a park as a botanical garden.

Most often this palace is included in excursion programs in southern Italy and a trip here is offered by all major tour operators. But from Naples and Rome you can get here on your own.