In the early 1970s, construction work was underway near the Swedish village of Tanum . A group of workers was given the task of blasting away a rocky cliff. As the workers were digging holes to place the dynamite sticks in them, one of them saw that the rocky surface was covered with some kind of images. A research expedition was organized immediately and discovered more than three thousand rock drawings throughout twenty-five kilometers of rock in the Swedish province. The petroglyphs belonged to the Bronze Age and were grouped in several dozens of places. The period of occurrence of the ancient drawings began four thousand years BC and ended in the antiquity.

Conventionally, the entire former coast of the prehistoric fjord was divided into four areas – Litsleby, Witlueke, Fossum and Aspeberget. For tourists here have created a network of paths, equipped with special signs and plaques.

The drawings themselves have no color. May be, the ancient artists and painted their creations, but the paint has not reached our days. Now hollows of petroglyphs are filled with red ochre, so they become visible to tourists in all the details. In addition, the paint prevents subsequent oxidation and hence the destruction of this monument of prehistoric rock art. Sometimes, for better preservation, the boulders with paintings are covered with earth. 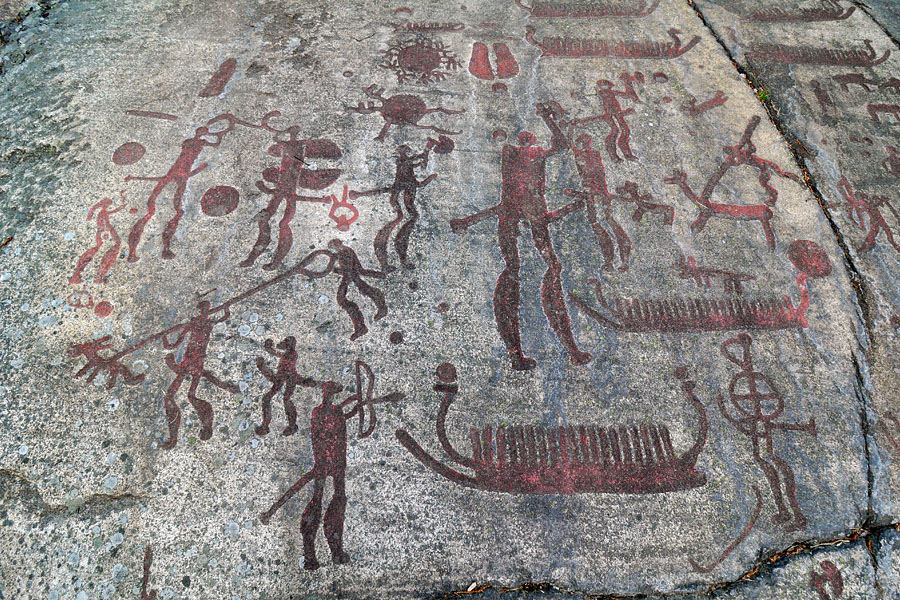 Very close to the museum is Witlueke Rock, where the most interesting paintings are located. The slightly sloping surface with almost three hundred figures depicted on it is twenty-two meters long and six meters high.

The “lovers” composition, featuring a man and a woman kissing, probably serves as a symbol of sacred marriage. In almost all pre-Christian religions this rite was intended to increase the fertility not only of people, but also of livestock and agriculture.

All over the surface with drawings, from one edge to the other, there is a chain consisting of seventy wells . Why this was done, scientists have not yet figured out, but this row crosses several scenes: a praying man and a snake, a man in a chariot, a figure of a demon and others. This chain also cuts through a battle scene, but since there are no dead or wounded in the cluster of figures here, perhaps this image shows some kind of conflict between the deities . Remarkably, there is only one dead body in the entire panel, in the composition with the grieving woman, where she is kneeling in front of the man lying down. 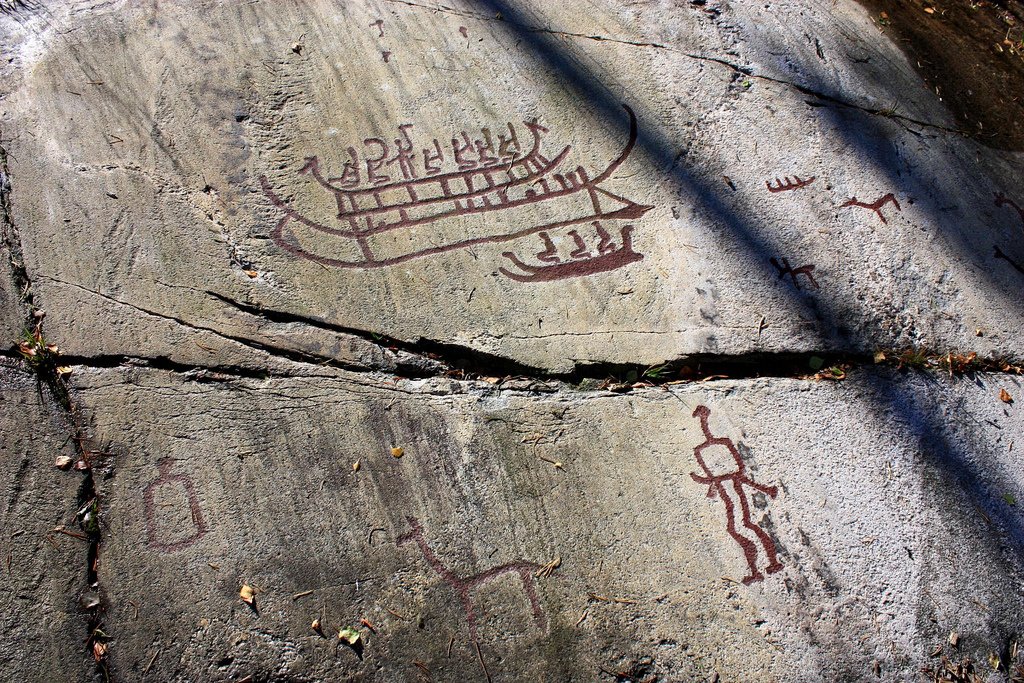 Scattered here and there throughout the panel are many images of boats, rowers, and warriors, some of whom are armed with axes.

Researchers attribute such a large number of boats and ships to the fact that ancient people believed that man, after his death, sails to heaven. By the way, the footprints are considered a symbol of death here.

Archaeologists also found an image of a man with a horned helmet on his head, who drove a chariot with a goat or a horse harnessed to it. In front of the man is drawn a wavy line, which scientists believe is a lightning bolt. If so, it is most likely the image of one of the ancient gods, perhaps Odin or Thor.

Among the images are many boats of various sizes, some showing teams of rowers and warriors armed with axes. 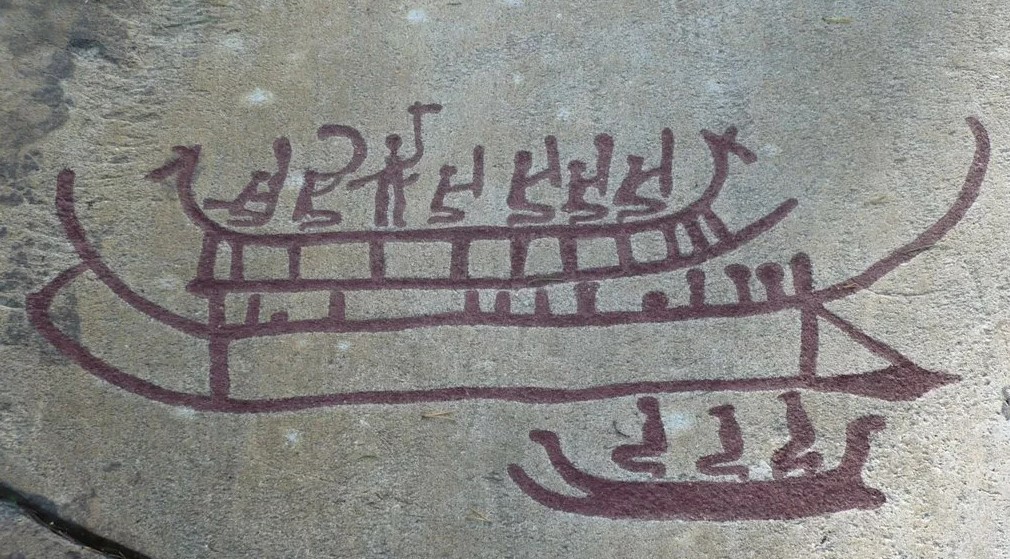 On the entire surface of Witluk, experts have recognized 13 kinds of ornamental drawings and figures, among which, in addition to people, animals and ships, there are also weapons, plants and birds. The latter are even depicted in the form of a whole flock. One such group of birds has been deciphered by scholars as a flock of cranes symbolizing the return of spring. Another composition includes one hundred and thirty figures, which are very close to each other. Depictions of daily human activities, such as tilling the land, are especially valuable for studying the life and beliefs of prehistoric society.

This cluster of drawings is located three hundred meters from the Witlucke rock.

Two women with beautifully braided hair raised their hands holding a circle of rays. Apparently, this depicts a rite of worship of the sun as the life-giving luminary.

Another composition depicts a man with a plow, engaged in plowing the soil and powerful bulls. A little higher is a man with twenty-nine holes in his huge hand, and still higher are two ducks looking at each other. In prehistoric beliefs, birds were considered embodiments of the gods or their messengers, and therefore were very important. 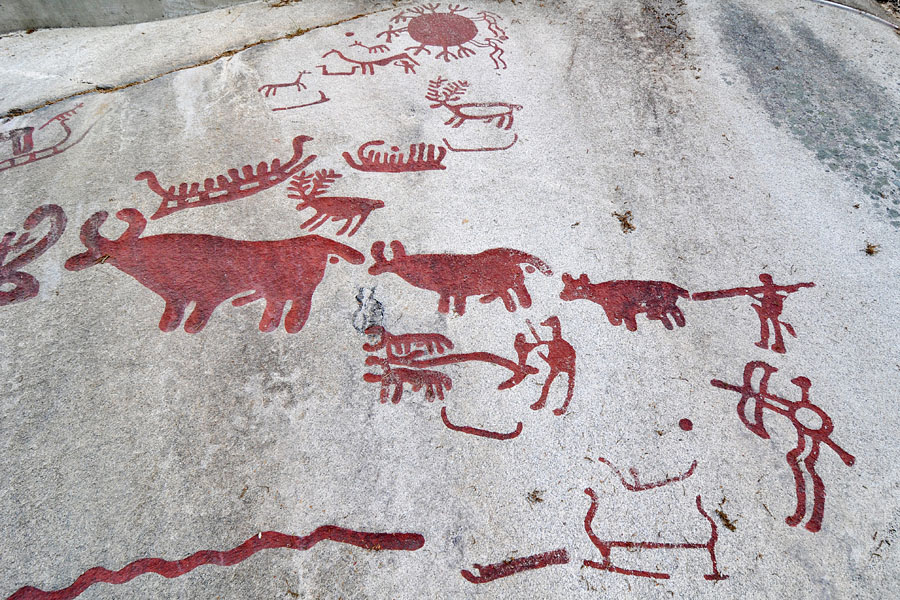 There is also a depiction of warriors with weapons in the form of an axe and a sword and a body in the form of a circle, which most likely serves as a symbol of a shield.

There is also a very unique depiction of a whale. By the way, despite the proximity of the sea, aquatic creatures were almost never depicted by ancient people.

The composition “God with a spear” stands out in this group of petroglyphs. This huge male figure, almost two and a half meters high, is one of the largest depictions of man in the European north. It most likely depicts the god Odin or his descendant Thor, as indicated by the zigzag shape above the man’s head. Around the deity are depicted many boats steered by oarsmen.

On this rock are very widely scattered drawings, from around 1200 BC to 1 AD, which suggests that artists have been returning to this site for centuries. 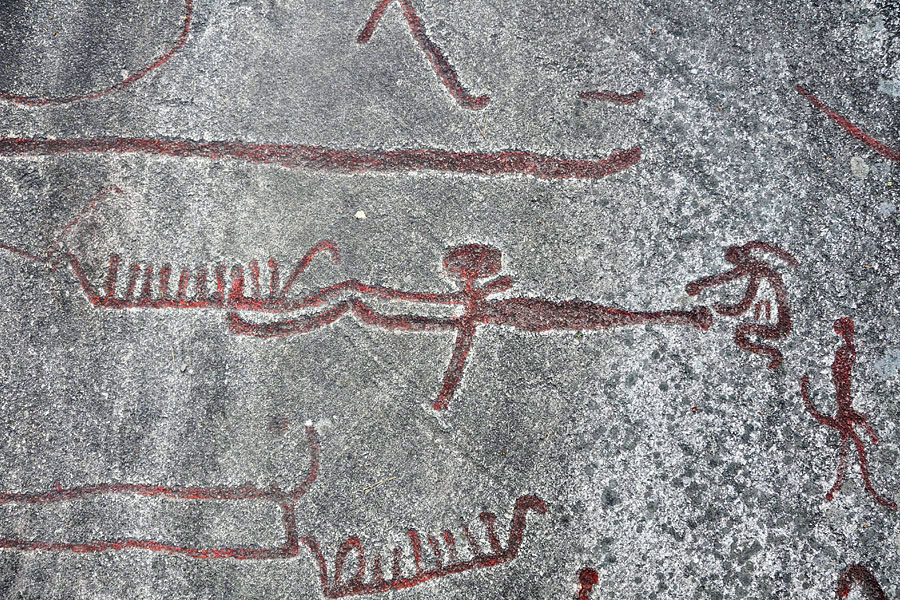 Researchers claim that everything here was done by the same master, as the unity of the exposition and the same technique can be seen. The almost forty figures on 25 square meters represent an ancient example of narrative painting where all events are interrelated and shown in a clearly traceable sequence. Based on the depicted weapons, scientists date these petroglyphs to the VI-VII centuries B.C.

Considering these amazing traces of ancient humanity, it is necessary to understand that this is not the work of a single free artist. Such paintings had a great ritual value, were almost sacred. Not everything was depicted in a row, it was possible to draw only certain scenes with specific images. Daily life was depicted much less often than battle scenes and ritual compositions. Women and even more so children were almost never depicted. 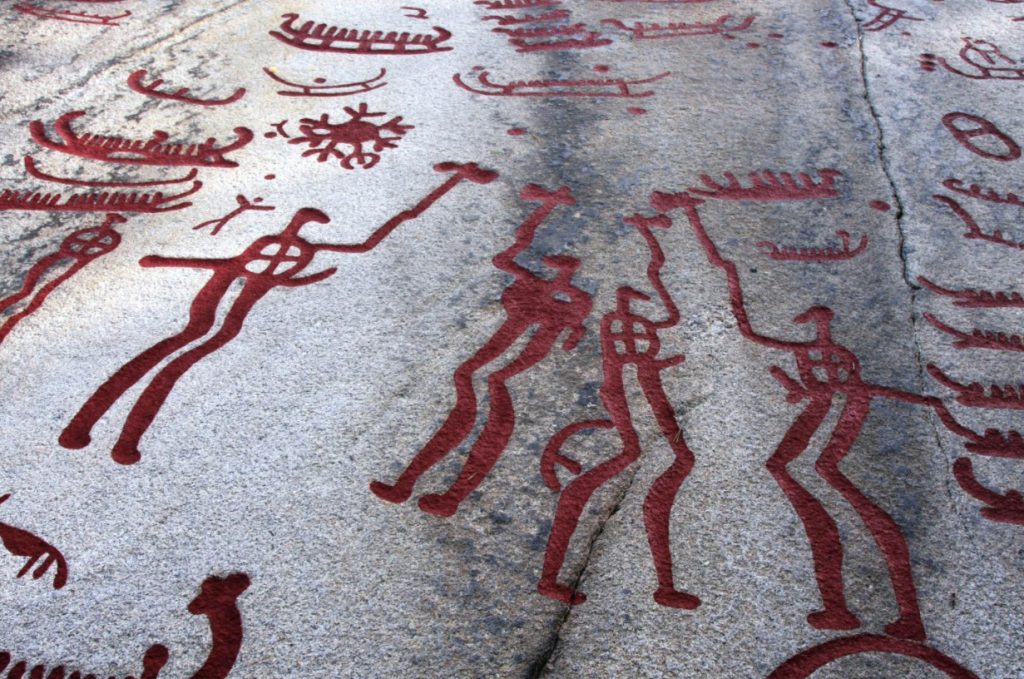